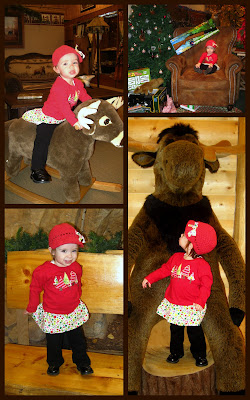 Can I just say I LOVE, lOVe, LovE Amelia's little bum in this little skirt! I just want to spank her diapered bum and kiss her until she pleads UNCLE!!! We made an excursion to the Alpine Cabela's yesterday so Justin could fill out HR paperwork. While he papered away Amelia and I explored the store. This Cabela's is about three times larger than the one in Sidney. Amelia chattered like a fish in the aquarium tunnel. She absolutely loves the pishies. We sat in Santa's chair, looked a moose, rode a deer, and climbed a fake mountain. Justin and I tried on different snow boots but decided to wait until we actually get to Sidney before getting some. Justin really wants me to get a parka down to my ankles (tiny exaggeration). Mostly, I think he wants to get me a parka so he can get one too. The man has about 20 coats, parkas, wind breakers, water proof jackets, etc. All we need is another coat!

I braved Walmart with Amelia while Justin went to run some errands. I don't like going to Wally's with Amelia anymore. She only sits still if she is chewing on gum or candy, and then for only a couple minutes. Even the toy aisle doesn't distract her much. Good thing she is so cute.

Melissa invited us up to Ogden for dinner. Jonathon had the 3rd Pirates movie playing on their HUGE television and Blu-Ray player. I could see the actor's zits the screen was so clear. Melissa made yummy teriyaki chicken and broccoli. Charity and gang left early to attend Kenny's nephews baptism. We gave mom a ride back down to NSL after the party died down. Justin and I are enjoying listening to my newest geek book on CD: Pillage. It is pretty good! My eyes hurt from so much photo editing. No more photo shoots until after we are moved and settled.