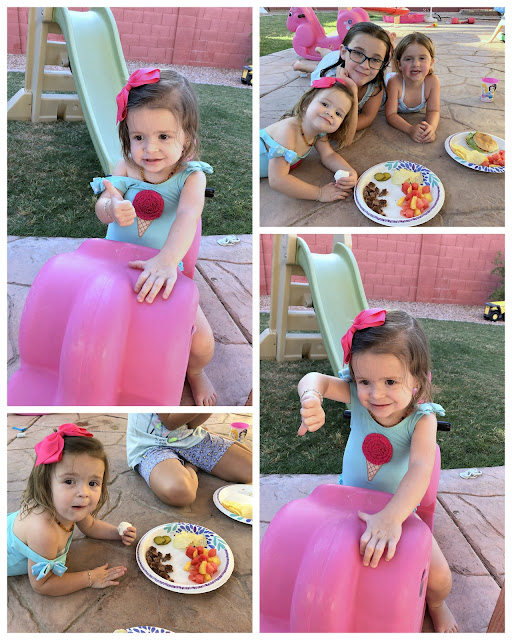 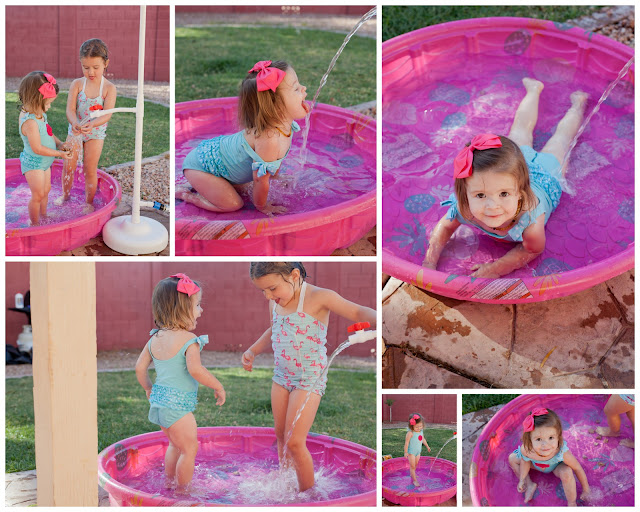 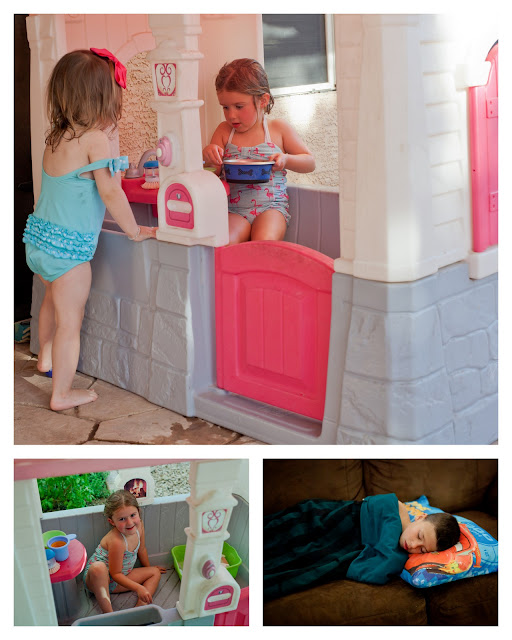 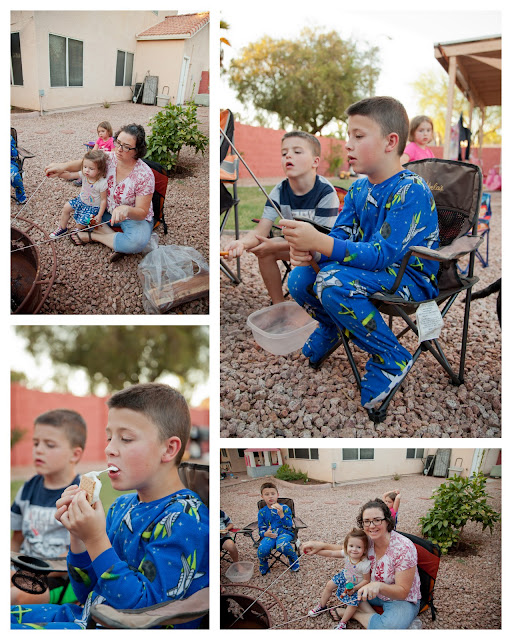 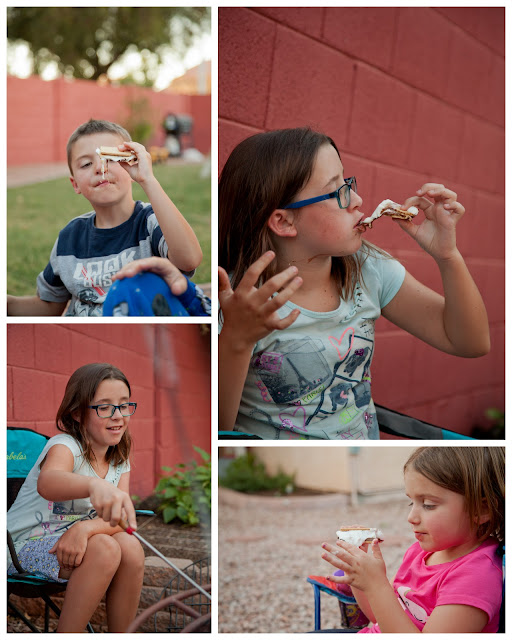 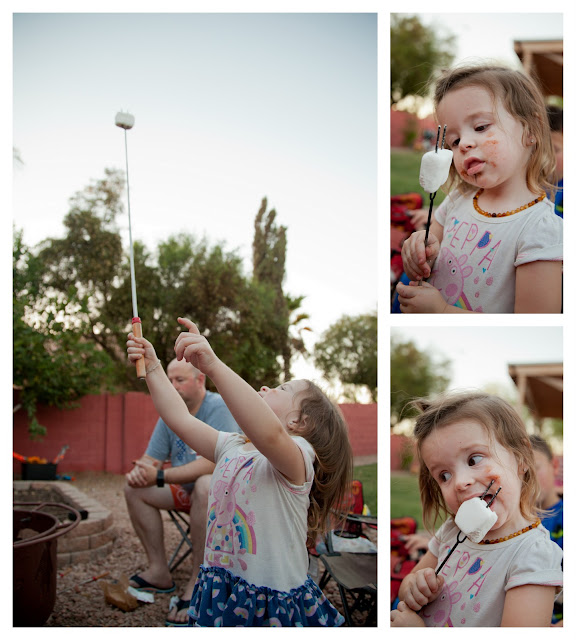 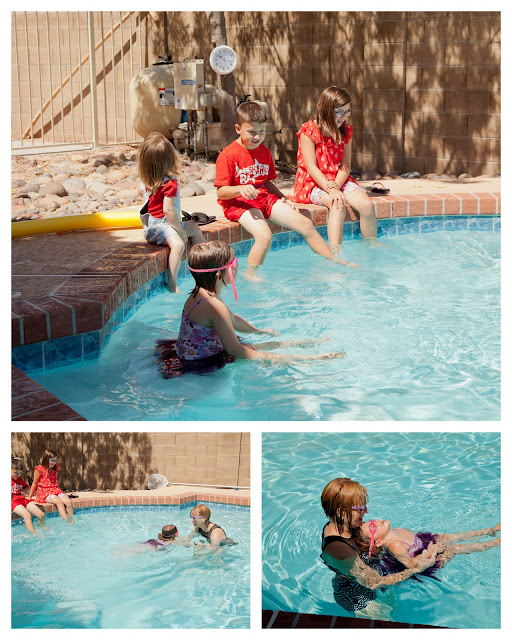 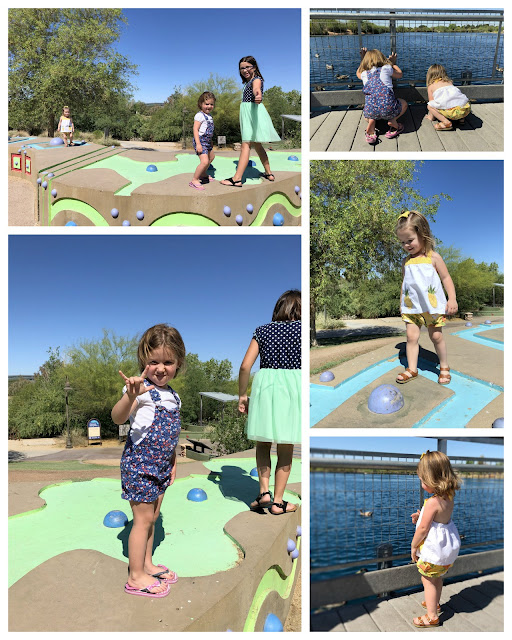 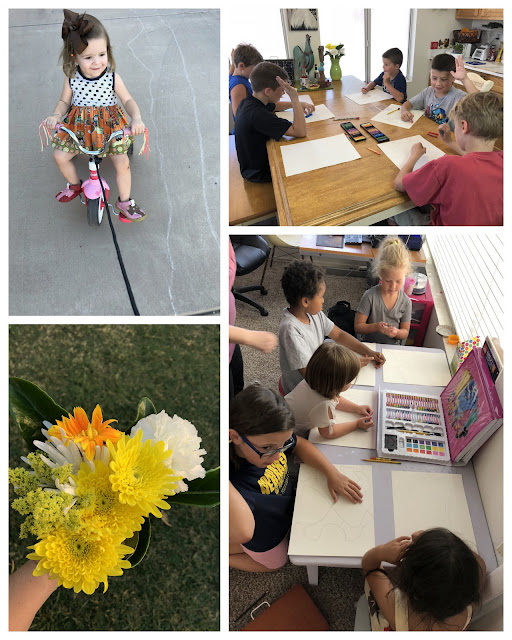 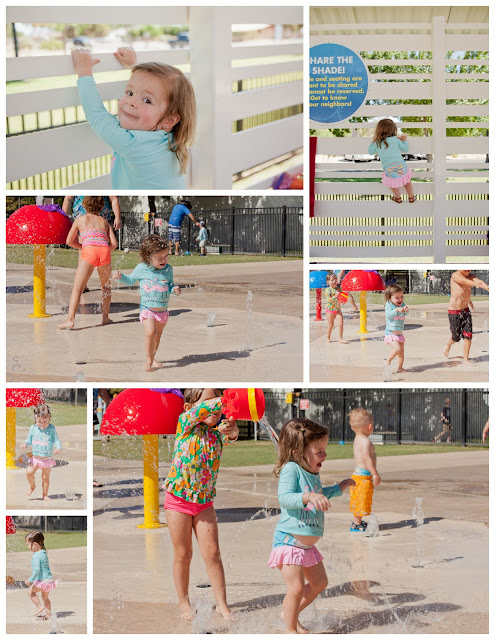 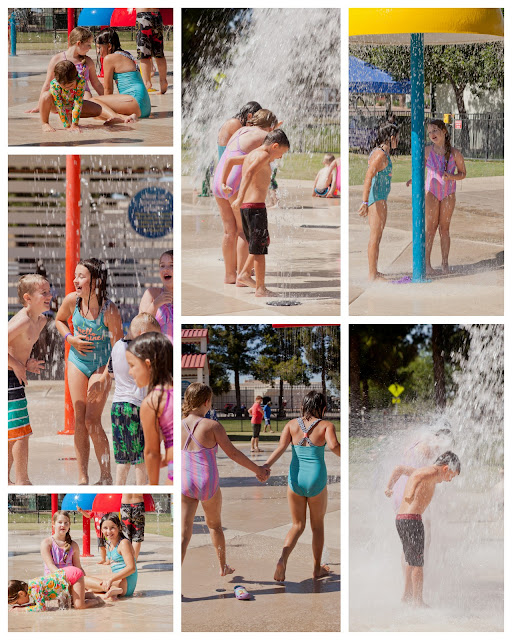 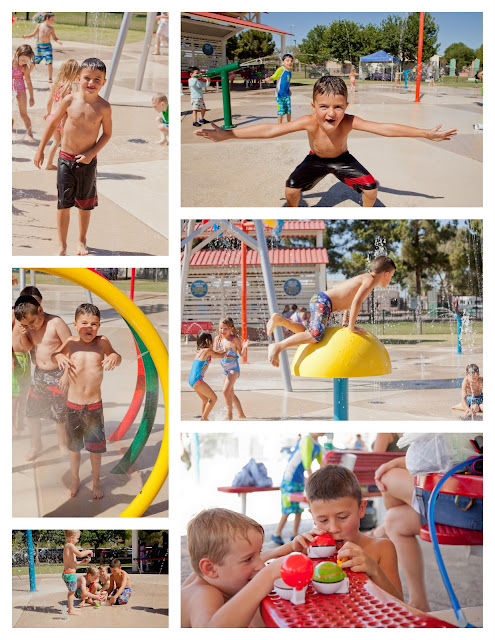 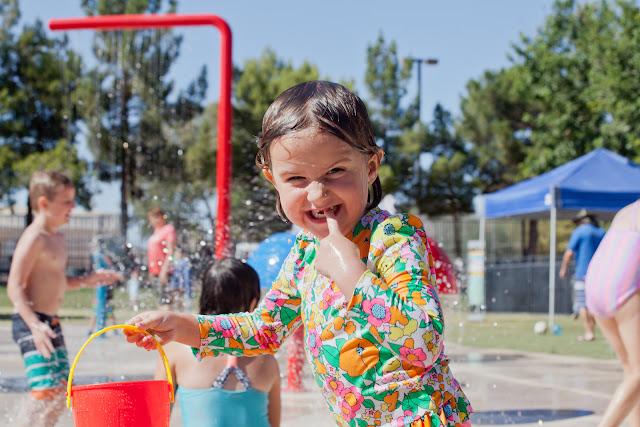 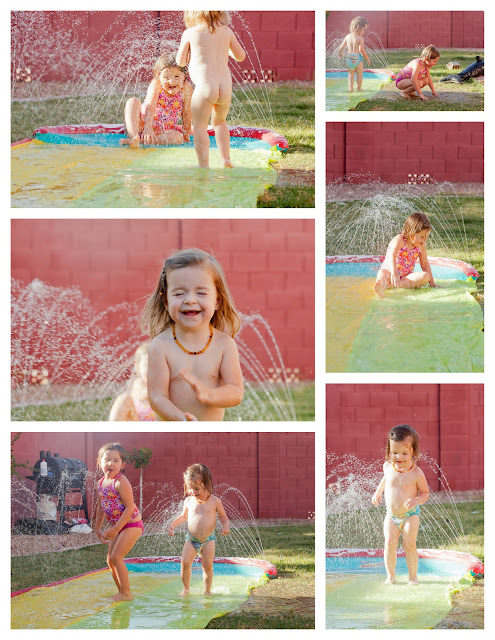 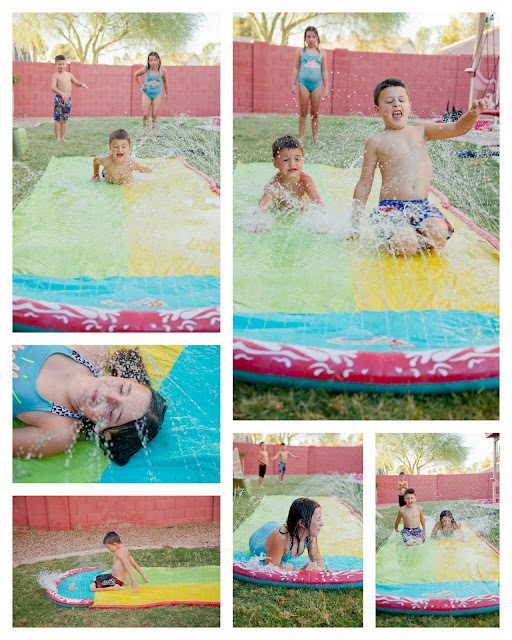 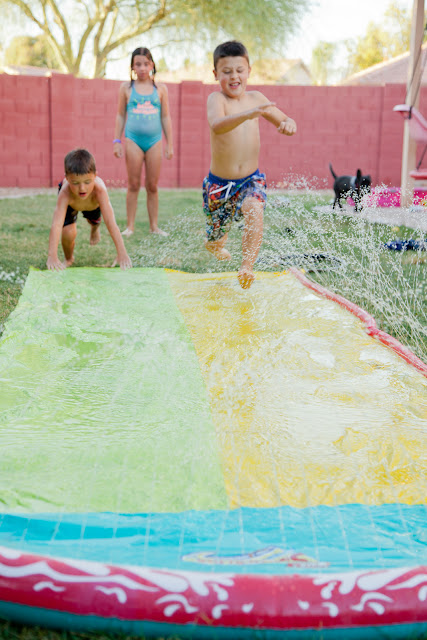 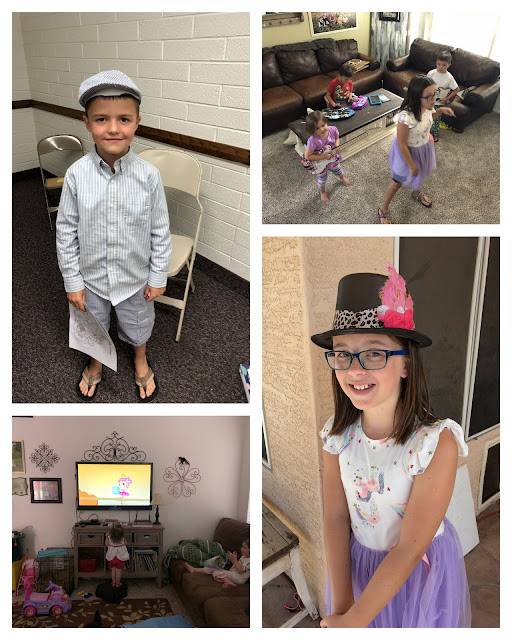 Memorial Day, sickness cursed this year. Phillip and Mia came down with ear infections, Evelyn and Josie had stomach flu, and Justin badly hurt his back. Instead of a lovely hike we rolled around in the house watching TV and being bored. I went grocery shopping instead. Justin was fixing a damaged sprinkler head, his back/hip gave out in that awkward position. He was able to get 3 chiropractic adjustments, one that very evening at the Godard's home. We are lucky to have a chiropractor as good friends and neighbors. The kids splashed about in the pool for a diversion. Justin fussed about with the pool chemicals. He is learning keeping the chemicals balanced is quite the challenge, the hot sun burns off the chlorine quickly. I fixed up a fruit salad and hamburgers for dinner. As a treat I got some wood and Justin made a fire in our pit, s'mores it was! Josie was delighted to eat marshmallows off a dirty rod. Poor Phillip took a very late nap, his earache kept him up all night. Making s'mores is quite the magical experience. The gooey marshmallows, melty chocolate, and crunchy crackers, mmmmm.

Justin stayed home from work Tuesday and Wednesday as well, had two more visits with Dr Godard. He worked from home a bit, mostly he stayed flat on his back icing it off and on. Phillip was his fetch-maid! Justin was quite amused when Phillip got him a glass of ice water with three straws, because Justin has a big mouth! Our no-tech Tuesday was lovely...I enjoyed taking a long break from photos and the computer. The kids stayed busy with all our activities in the morning. The kids stayed in the pool water for several hours to pass the time. Justin got reamed out several times for trying to watch TV on the big screen. He had to watch on his tablet. We cleaned up our house with all our extra time in the afternoon. Phillip met with Dr Melanie about his ear, got a strong antibiotic to help clear it up. She could not even see his eardrums because so much fluid was in his ears. I got some drops to dry out his ears after swimming and now make sure he is wearing his ear plugs. Evelyn started swimming lessons with Sister Price. We are practicing chicken, airplane, rocket, ice cream scoops, and daddy kicks! I already see improvement a week later. She can manage to swim without aid in our 4.3 foot deep pool. Josie was intent on swimming in the pool with Evelyn, she dipped herself without hesitation. Amelia noticed a new girl in swim team who was crying on her first practice day. Amelia completely sympathized! She went over and introduced herself, telling her story about her traumatic first day as well. I'm glad she had the nerve to help out a new friend in need.

Right after swim team for Everett we headed to the Elementary school to retake the last day of school photos. Thankfully, the kids were good sports and I got those taken in a jiffy. We headed to the library to return all our books and get new ones. The library was still closed so we decided to spend some time playing at Riparian. The older kids soon had a complicated game involving lava and saving the world going on. We stayed around the play area until the library opened. Evelyn, Josie and I went to see the ducks. A group of ducks, led by a large goose...seriously...decided that Josie was hiding crackers in her diaper. They started to pinch her clothes with their beaks. She was largely freaked out by that experience. We quickly vacated their territory and went to watch the calmer ducks floating in the water behind the bridge fencing. Much safer! We met up with the Russo family at a splash pad for our water day activity at Founder's Park splash pad. It was really nice! Completely enclosed with shaded areas and seating for parents to watch. Amelia and Averie skipped about holding hands in their own girl world! The Phillip, Owen, and Jack started a pokemon battle with poke balls Phillip brought. Josie ran about darting into the water and largely enjoying her little self. I managed to capture Evelyn's devious face right before she dumped a bucket of water on Josie. I could almost see horns on her head. Everett disappeared into his own world, I struggled to catch sight of that boy. He found a friend to play with then kept himself busy targeting aliens with his imaginary guns. Josie somehow snuck out of the enclosure (with another family). One moment she was there, the next an angry lady was pulling her back into the splash pad area. She was almost purple with rage at me for negligence. Yikes. Josie made it to the parking lot alone. By far she is the hardest to keep track of, that girl is fast and can disappear in the flash. Thank you purple-faced lady who was really mad at me. I appreciate your well-aimed anger, you saved my Jojo girl. We cooled off with shaved ices before heading home.

I spent all of Thursday dealing with the photo disaster. I ended up permanently losing more images than I thought to file corruption and file overwrites. By the end of that day I had all the lost images I could save re-edited. I was able to hand over three flash drives to Debbie on Sunday afternoon. Phew, that load is off my plate now. I did order a large canvas and large prints of one image I totally lost but happened to order at Costco, who had the full-sized file. Chloe and Ronald invited Amelia, Phillip, and Everett over for the afternoon to play at their home. I hear the kids got to swim in their pool and play with cool electronics we'll never own. Mr Nguyen took the kids out for a McDonald's treat as well. With the older kids gone I was able to buckle down and get lots of work done, fast. Evelyn amused herself for two hours with her barbie dolls. I love that kid! Josie is slowly learning how to pedal her trike. I attach a bungee cord to the handle bars to help her pedal since her feet don't quite reach. I pulled out the slip and slide for the little girls to enjoy while the olders were gone. They had a blast splashing in "muddy puddles!" Josie actually slipped a few times, each time made her giggle and laugh.

Friday afternoon we hosted our first Art Academy. I taught a lesson on oil pastels. First we learned about oil pastels and crayons, the difference, and history. Our project was to draw an abstract design then color in the voids with three colors in the same family. We used baby oil to blend the pastels even further. One set of pastels I had on hand were terrible, oddly, the cheap set blended much better than the expensive set. The project seemed to overwhelm the kids, most giving up after 10-15 minutes. We had 10 kids participate this week! Hooray! Can't wait to teach about watercolors next week. Justin came home with a bouquet of flowers for me. Lovely! He puts up with my lack of nursing skills, I'm sure he deserved the flowers more than I did.

Our weekend was a repeat of Memorial Day, lazing about and making messes. Justin is moving around more but is still in a bit of pain. We watched more TV than is healthy. I worked on cleaning the disaster garage mess. It was steamy hot out there! Took me a while to dismantle the sewing station, sort dress ups, get Legos back in their bins, and situate Phillip's collection of Imaginext. Justin bossed the kids around in the backyard like a disgruntled drill sergeant. He was doing such a good job all the kids nearly expired from hard work and movement. My eyebrow scabs finally started to fall off. The scabs itched terribly in the heat! Now my brows are much lighter and look quite natural. I am very pleased. Towards evening I had a photo session with the Jackson family. We did family photos then a bubble bath for their newly turned 1 year old. So much fun.

Our stake held a special fast for rain to lessen the drought enough so the youth summer camps won't be cancelled. Most of the campsites in AZ are closed this year because of extreme fire danger. Mia fasted the afternoon! Sunday evening we watched the "Be One" broadcast. I was impressed with the Bonner family! So many folks dressed up in white. We all felt uplifted while listening to the story about the Blacks in the LDS church. The kids wanted to camp out in the living room, Justin was Mr Grumpfish and refused to let the kids use a tent. He finally relented after an hour. He set up his very first tent he got back in 2000 after BYU graduation. The kids were elated to sleep in the tent. Thanks for changing your mind Justin. Amelia had a terrible night due to her worsening earache. I was in Jojo's room since she kept crying and waking up the kids. I got to sleep on her floor. Mia was groggy enough to not fetch some pain relief herself, or ask Justin for help. We went to the Dr again come Monday morning.