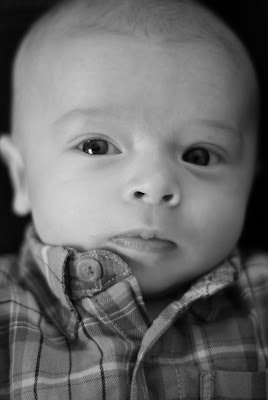 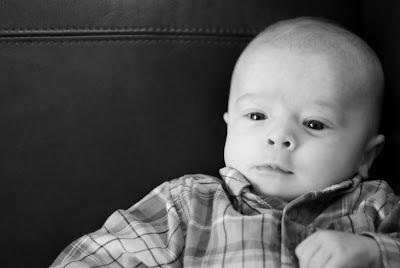 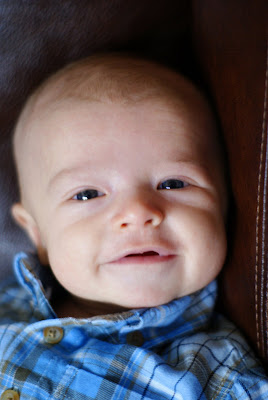 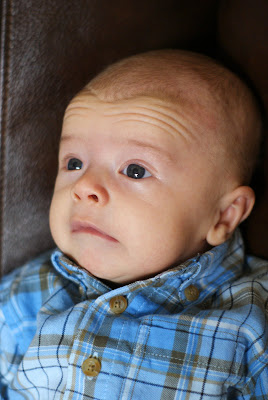 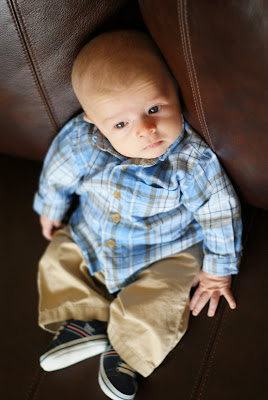 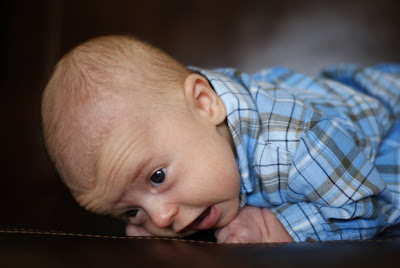 Phillip's Not So Impressive Head Holding Skills
Phillip is now two months old! His calendar is sadly neglected in some box, which I found today. To date he is more awake and alert. His favorite time to be cute is on the changing table, where he smiles and coos at me. He discovered his little voice about 10 days ago. Phillip can be found talking to the animals under his playmat. He is not so aware of Amelia yet because she moves to fast for him to get a good look at her. Tuesday we will find out how much he weighs and those other important stats. He is one cute little man! My only worry is his breathing and extreme snoring. Yikes!

The Miracle of the Ring 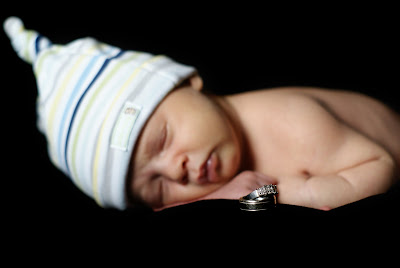 In early September I took some pictures of Phillip using our wedding rings as props. A couple days later I realized my ring was AWOL. I thought maybe Amelia found it or it got jumbled up on the mail pile. For weeks I surreptitiously looked for my ring, then confessed to Justin that it was lost. Miekka helped me look for it in the couch and as we moved stuff to the new house. No ring! By Friday I was really anxious because we were nearly moved out of the apartment, in the process of cleaning and clearing the final stuff. Earlier in the day I removed all the bedding to wash before remaking the bed. The last thing I did was take the bedding out of my car and onto the bed. As I remade the bed I noticed my ring sitting squarely in the middle. I know for a fact my ring was not in the sheets when they were washed because I gave everything a hefty shaking before loaded. But there it was sparkly as ever sitting on the mattress. I asked Justin if he found it and put it there as an "I found it first and told you so!" He said no...it must be the miracle of the ring. We considered painting a cross over the bed to mark the spot of our own little miracle.