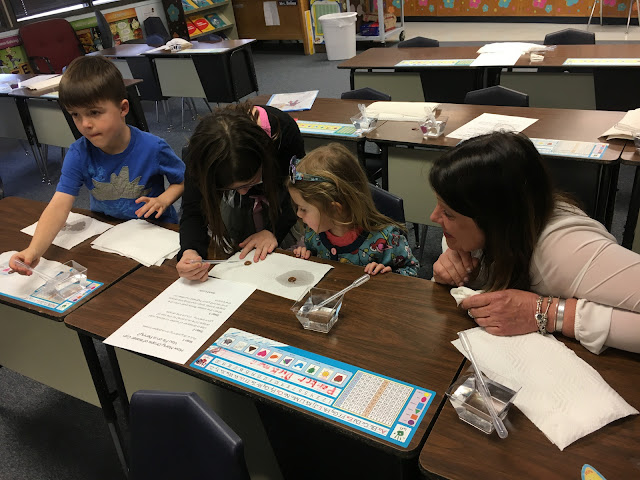 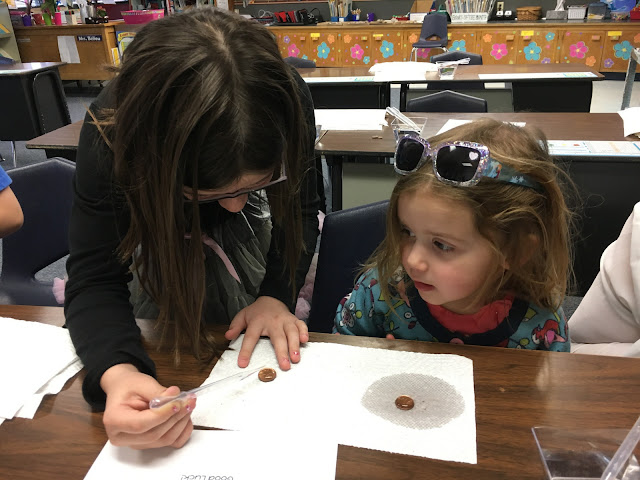 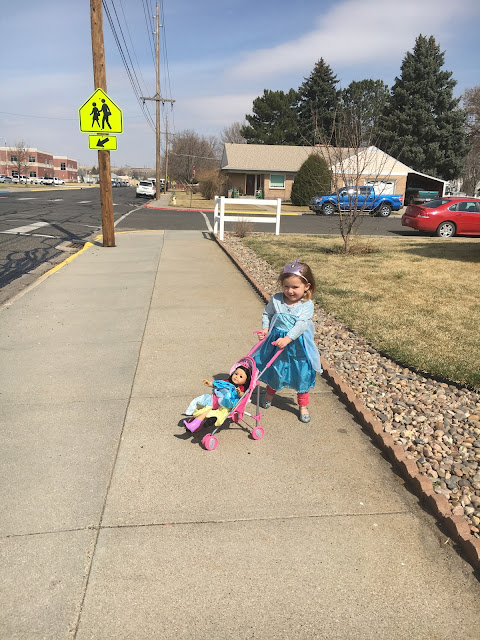 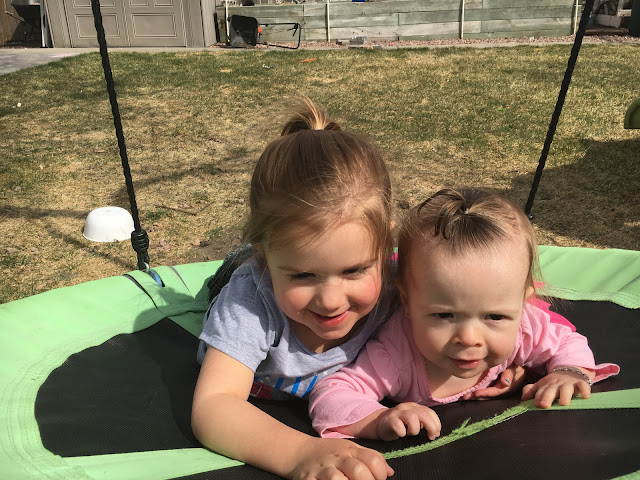 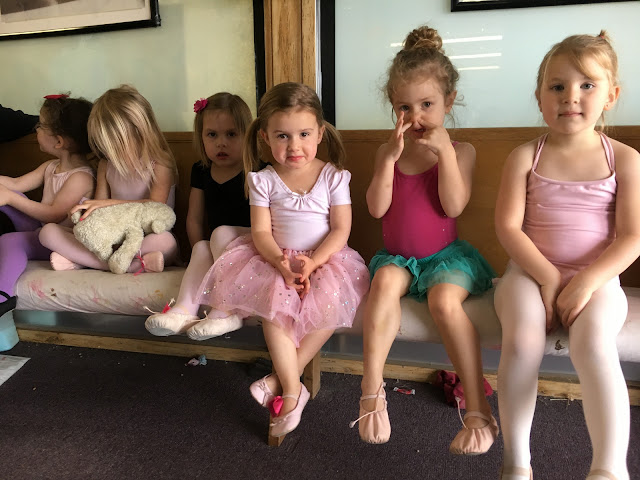 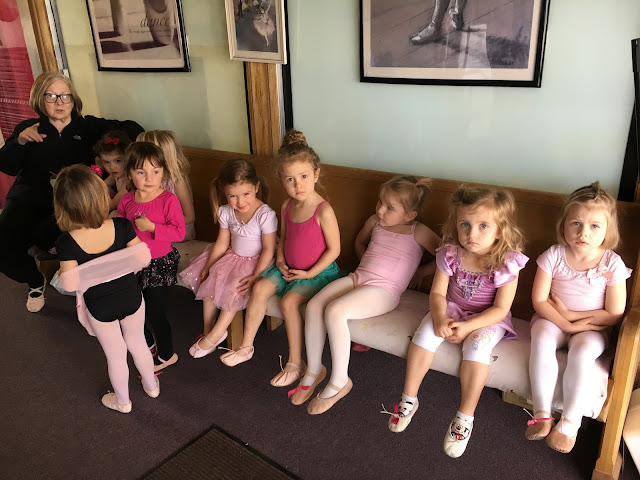 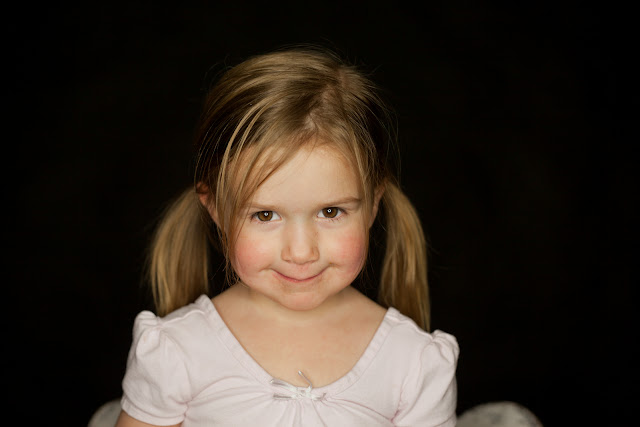 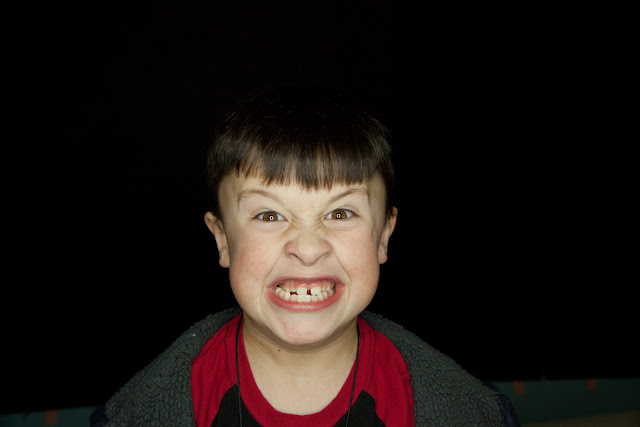 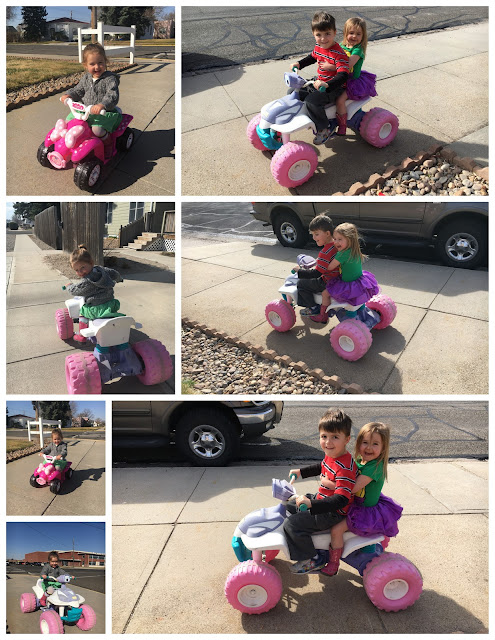 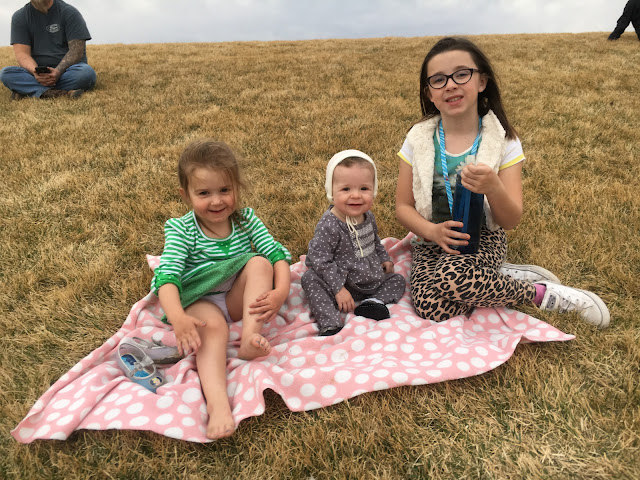 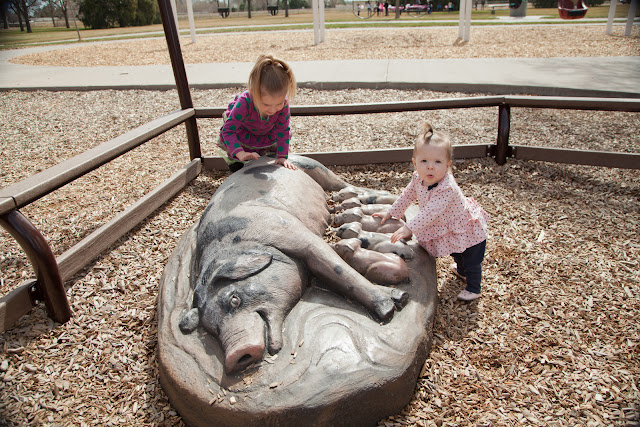 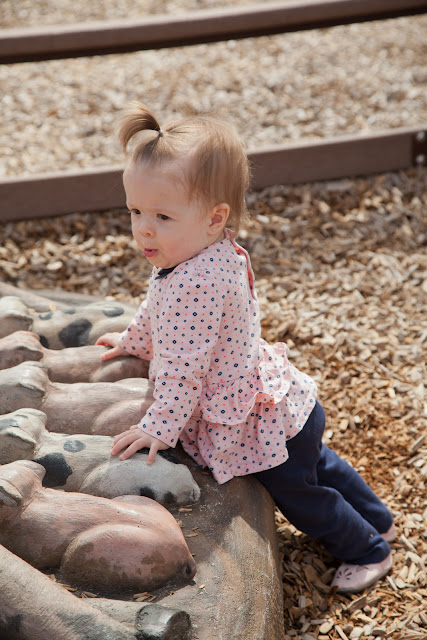 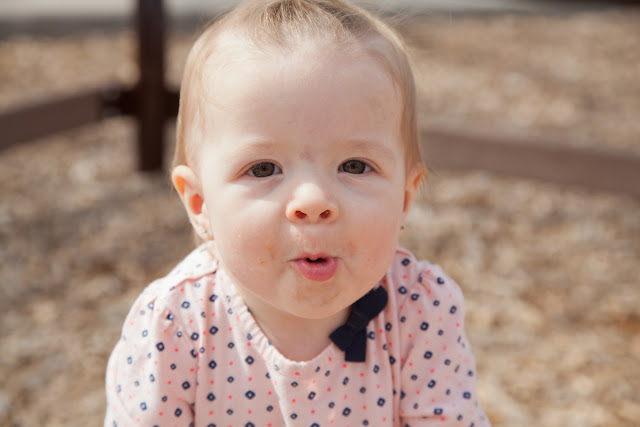 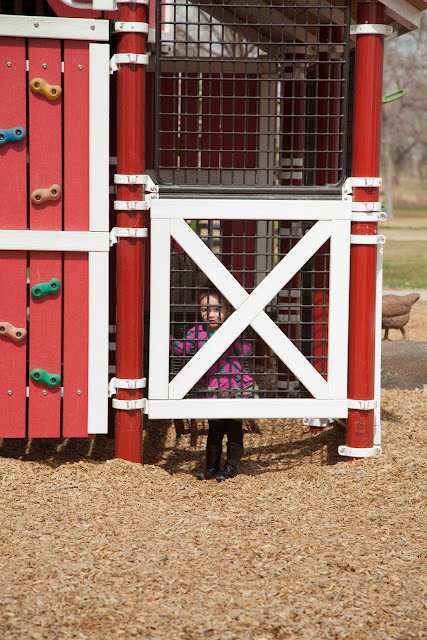 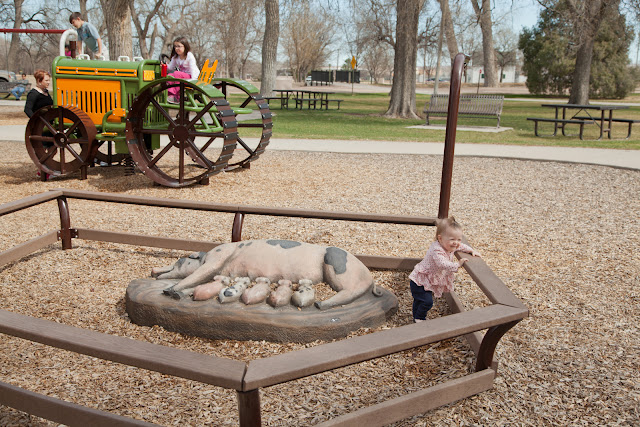 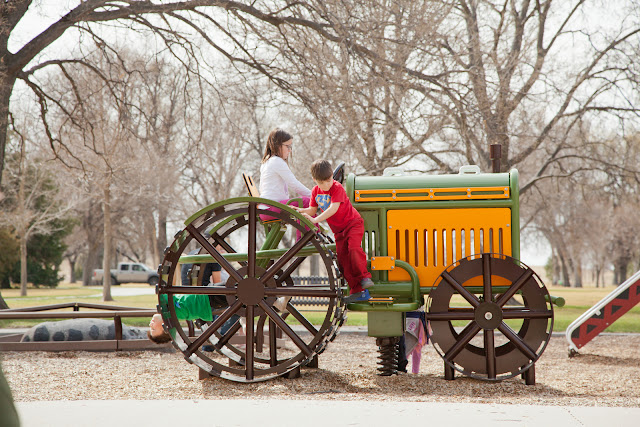 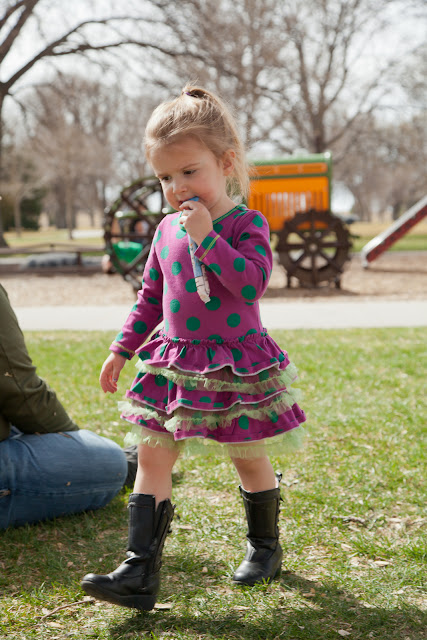 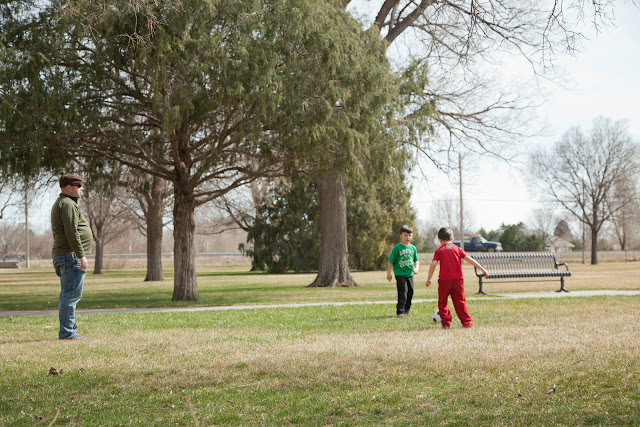 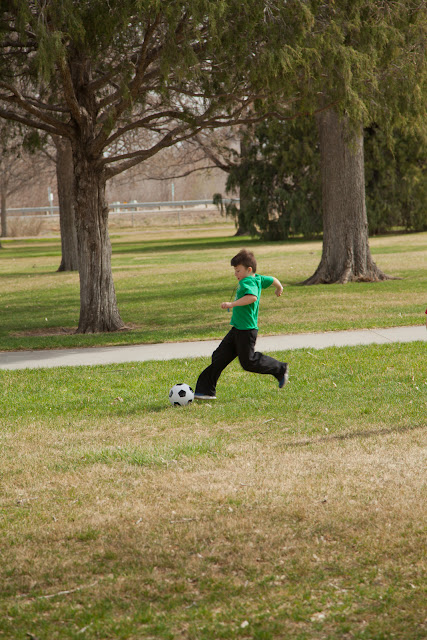 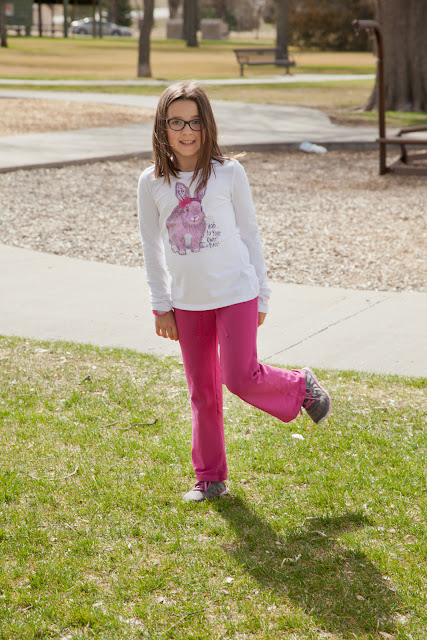 Monday for FHE we headed to Phillip's school for Science Night. Soccer practice was moved to another evening so we took Mia to piano then went to the school. I am so grateful the schools host these fun family nights each school year. Justin pulled in right as we were crossing the street! Mia wanted to start with Mrs Belieu's room, her favorite teacher ever! Amelia earned the highest amount of droplets on a coin, 58 droplets! Amelia joined us for three other activities then I walked her over to ballet class. Some of the fun experiments included: making slime, rockets, levers/catapults, gravity experiments, marshmallow shooters, group solving problem, and making carts for peeps. Everett and I made a cart together. I was surprised it actually moved, Everett raced his cart until he earned a high score. The boys loved the marshmallow shooters, especially when their treats accidentally hit someone. We picked up Mia from ballet around 7 pm then nabbed dinner at Sonic. I really need to get on the ball and start making dinner much earlier than 4 or 5 pm. That would require planning, which I fail at quite a bit lately.

Tuesday the kids brought home fundraising packets for the American Heart Association. These fundraisers are really annoying, especially to the parents. The kids are enticed with cheap prizes they never receive and the parents get to do the work. Just ask for money, geeze. The kids were all hyped up on goof balls over the chance to go door to door collecting money. After dinner Justin took Amelia and Vader. I got the rest of the kids. Imagine two salesmen with exuberant amounts of energy and excitement. You hear the commotion before the door is ever opened. A wall of shouting welcomes you then two boys are shoving a paper in your face, asking for money, issuing challenges to drink water/eat veggies/exercise, and asking for a $1,000 so they can earn the robot prize. The entire situation was so hilarious folks ended up donating coins and rogue dollars just to get the boys to leave. One lady near us is named Rebecca, I told Everett her name and that I shared the same middle name. He nodded his understanding and went on to ring her doorbell. She opened the door. He said, "Hi! Rebecca! Will you drink water? Will you eat your fruits? And will you exercise? If you accept give me some money! Hoping for enough to earn a bigger prize!" Poor lady was a bit stunned by the barrage, I caught her up on the situation with a bit of laughter, she donated some dollars to the cause. Amelia's fundraising was not so exciting but she did earn more money than the boys.

Ashley Jarreau donated a well-used power wheels to the cause, the potty-training cause. Evelyn was on cloud nine when we picked up the new toy. Ashley said the battery was not working and that the toy might not work. Once at home I plugged in the battery and let it charge for a couple hours. Wonder of wonders, the battery works and the toy functions. Evelyn was in high heaven as she leisurely rode around the block 6 times before the battery started to run low. You should have seen that girl and her smile. She whooped and hollered as she zoomed around the block...at a walking pace. I let her drive it to pick up Everett from school. The two kids rode it home together. I broke down and purchased the Minnie Mouse quad ride during our afternoon trip to Walmart. Evelyn marched right up the clerk and gave her all the dollars she had clutched in her hand to help pay for the toy. Seemed like the older kids could enjoy the larger Power Wheels and Evelyn could use the smaller Minnie Mouse one. She was once again on cloud nine, her very own motorcycle. A week later, she is ready to return the Minnie Mouse one, I think the power button is poorly placed, she has to stretch her thumb too far to activate and hold the power. The foot pedal on the Power Wheels is much better and easier to manipulate. Plus, now that she has her toys Evelyn is begging to return back to pull ups. She pooped in her undies 9 times yesterday, peed twice. Today no poop but two peed undies. She threw quite the pity party for herself when I told her no more pull ups. Sometimes it stinks to grow up. Justin was caught unawares over my plot to still get the little quad even with the free Power Wheels. Yeah, I pulled a fast one but earned the flack right back at me.

The Laurels came over for their activity this week. They wanted to learn a bit about photography. I set up my new ring light for the girls to play with. We busted out a fan and some black paper. The girls had so much fun posing for each other and using my camera. I did not give much direction, just let them play. Looking back I should have guided them more about how to focus and use a large frame camera. Most of the photos were badly out of focus. Ah well, they had fun. Evelyn and Phillip were our guinea pigs while I calibrated my camera.

Evelyn is pretty excited to watch spring time unfolding. Each morning we check out the grass to see if it looks greener, the trees to find baby leaves, and the plants hoping for flowers. She was not happy about the rain until I told her the rain will help the pretty flowers to bust open. After it rained we went on a walk to find pretty dandelions. One day I had both girls on the saucer swing. At the same moment both girls started giggling at the other and giving kisses. That right there was magic, the magic of love and happiness. Amelia and I can be found singing along to the new Beauty and the Beast soundtrack. I got to see it again Saturday night with my friend Carly. "Oh! Isn't this amazing.....?" Love that song and all the new ones!

Friday night we spent tidying up the kid's rooms. The YM/YW are hosting a yard sale and asked for donations. As the kids cleaned they searched for items to donate, well at least my group did. I helped Evelyn and Phillip, the more challenging pair. I love, love, love to see an empty floor staring back at me.

Saturday we headed to Sterling for an afternoon at the park. The weather was perfectly mild. Justin dropped me off with the kids, he wanted to check out some stores for cycling stuff. Right off the bat Evelyn pooped in her undies. I had absolutely nothing. Right as I was arming myself with a roll of park bathroom paper towels another family from Sidney pulled in. She gave me a pull up and a handful of wipes. I chucked the dirty items in the garbage dumpster. Justin pulled in soon after that incident. Josie was quite amused with the pretend pig sty. Phillip and Everett found friends to play with for the duration of our stay. Mia declared she was booooooored, so bored. I picked up Easter stuff at Walmart before we headed back home full of sunshine and fresh air. Mia and I attended Women's Conference. I loved President Eyring's talk. He told a story about a son jumping on the bed, he picked said son up ready to give him a piece of his mind when the spirit reminded him that boy was a great man. I often feel this way as I interact with my kids, it is so easy to forget and let mean mom out of the bag. I was grateful for the reminder to control my temper.

Mom?! Since today is fast Sunday can we go home right after the prayer....ya know? Cause it's fast?

Everett: But WHYYYYY? The guy in the suit said fast meeting.

Me: He means fasting which is to not eat or drink for 2-3 meals and no snacking while we pray.

Everett grumbling: well then he should not say it's a fast Sunday. That just sounds even longer. Well then, Mom, can you pass me the vanilla "wipers"? (I packed a little treat of vanilla wafers aka wipers for the younger kids)