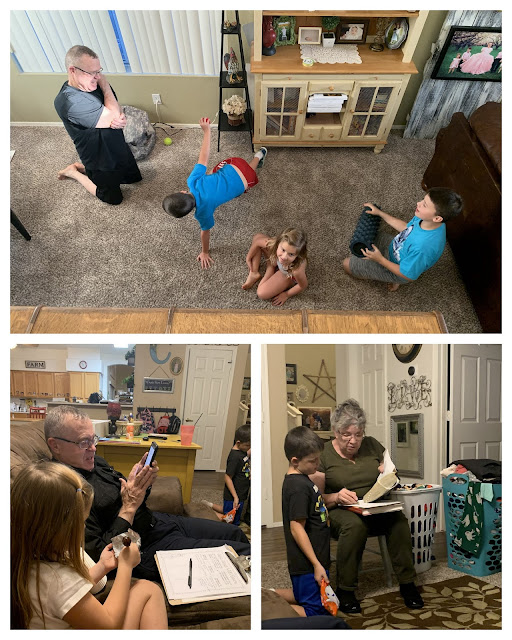 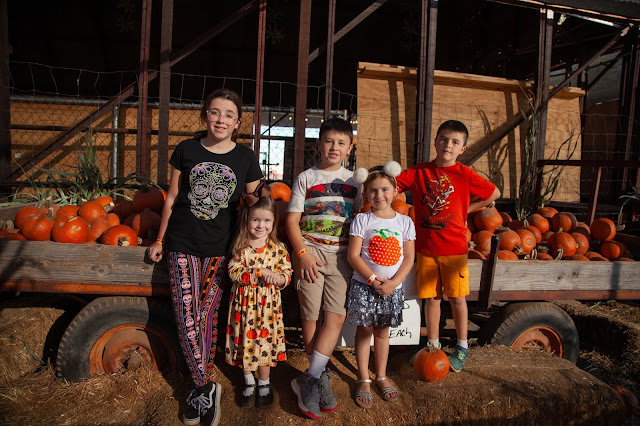 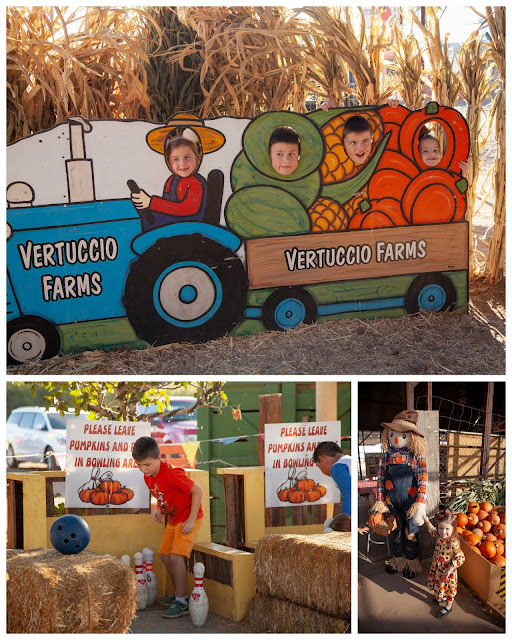 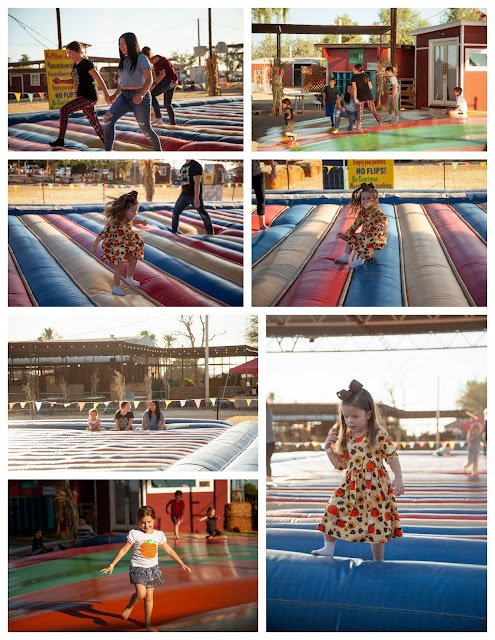 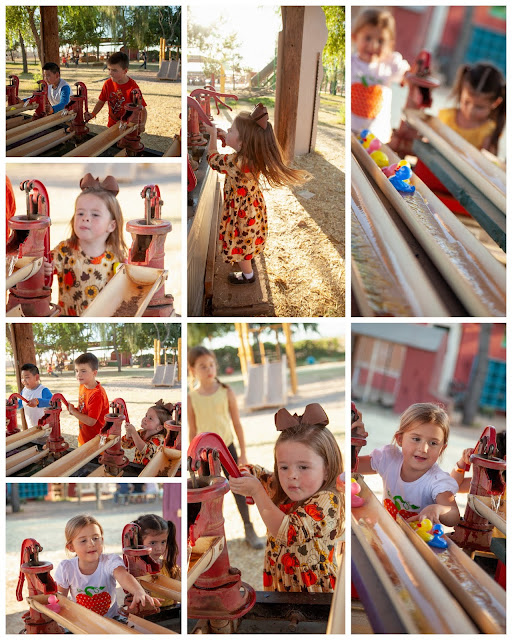 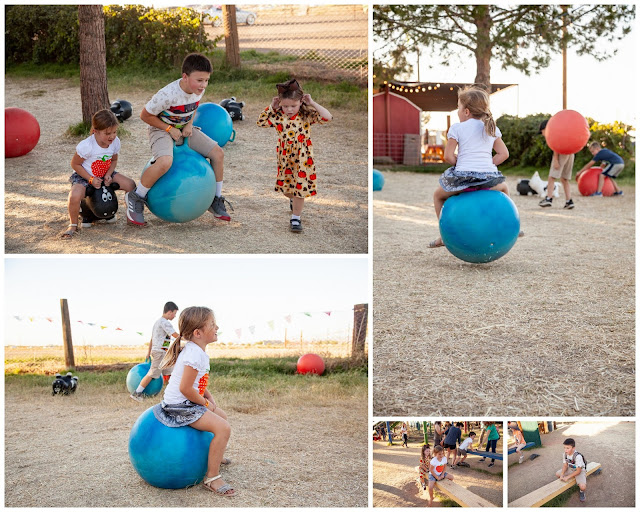 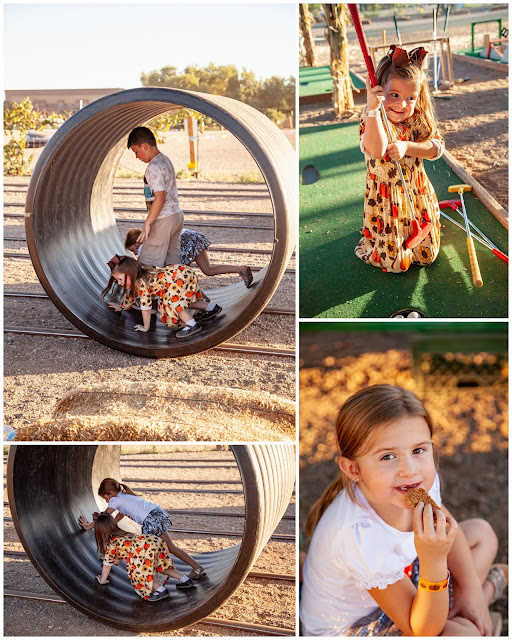 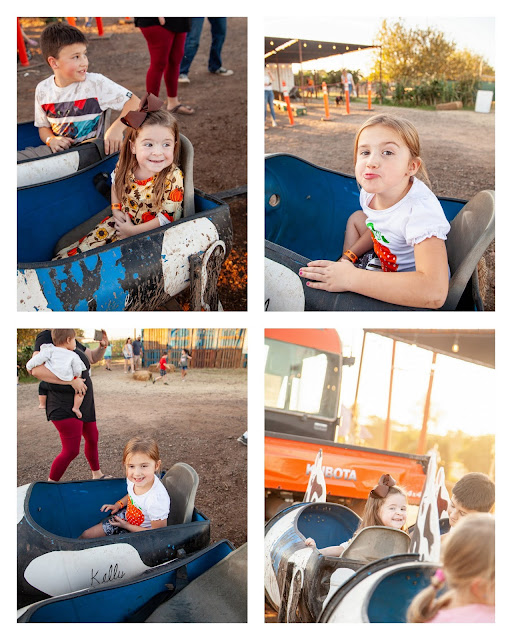 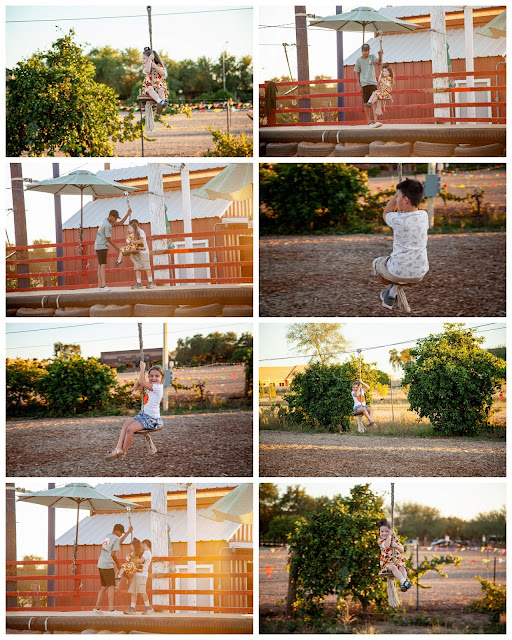 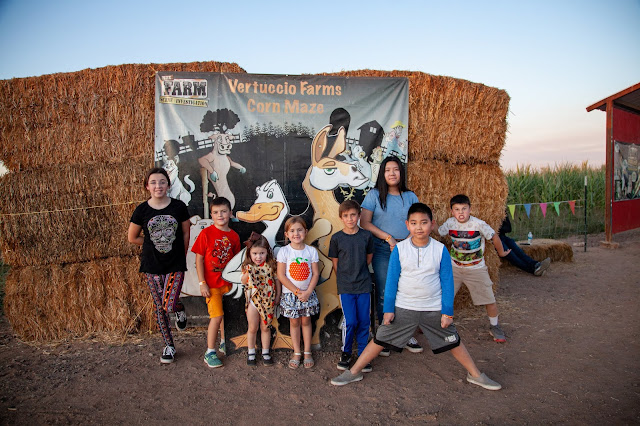 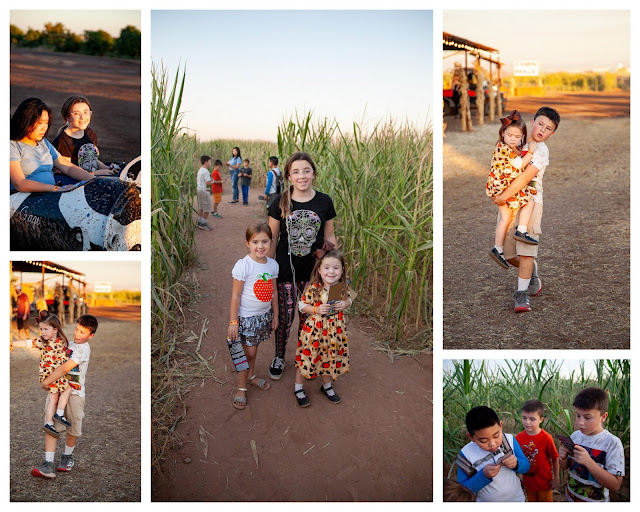 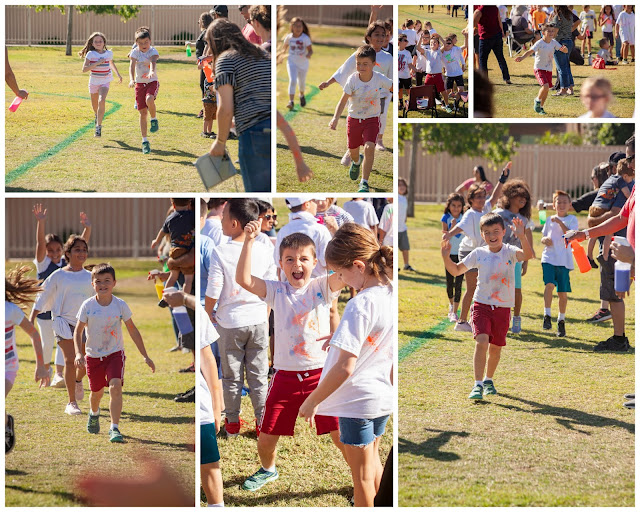 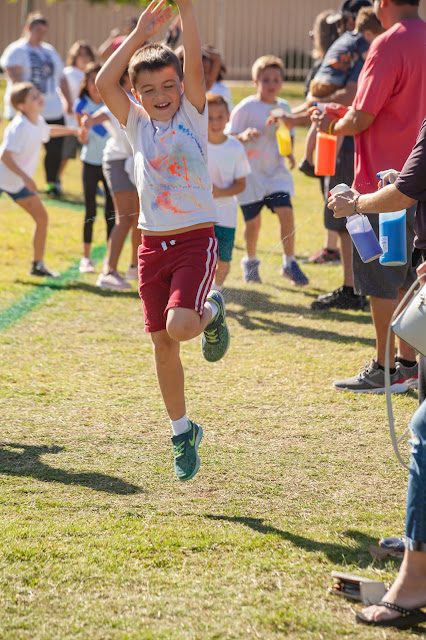 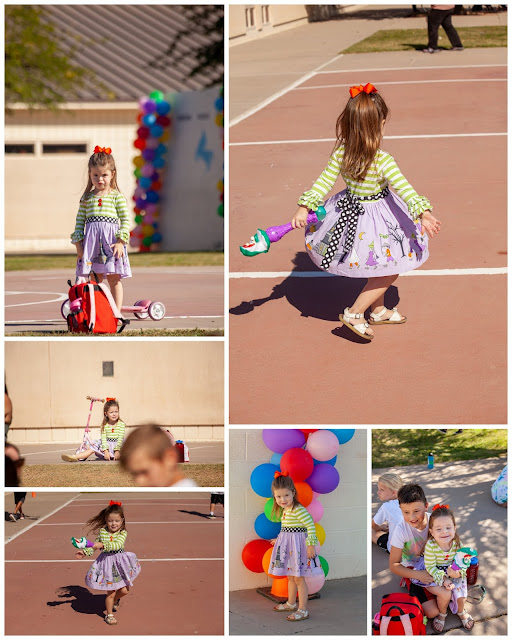 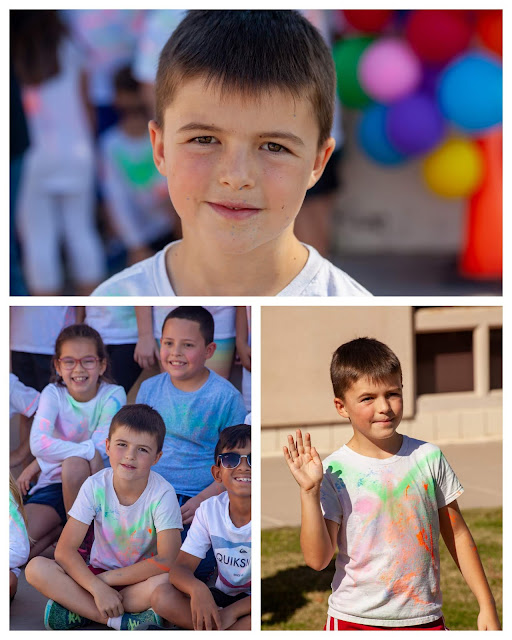 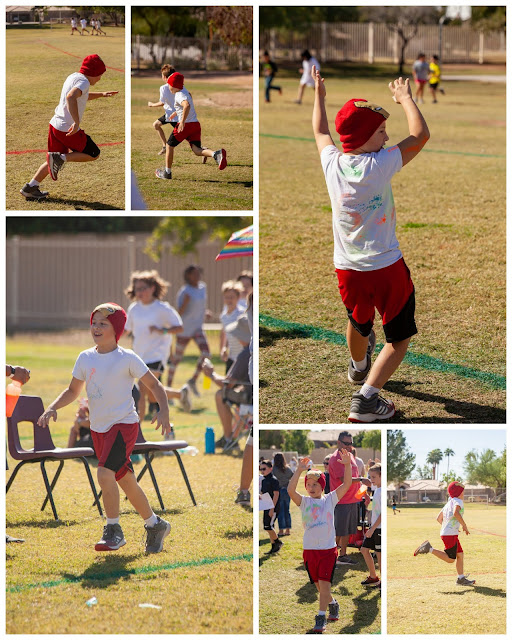 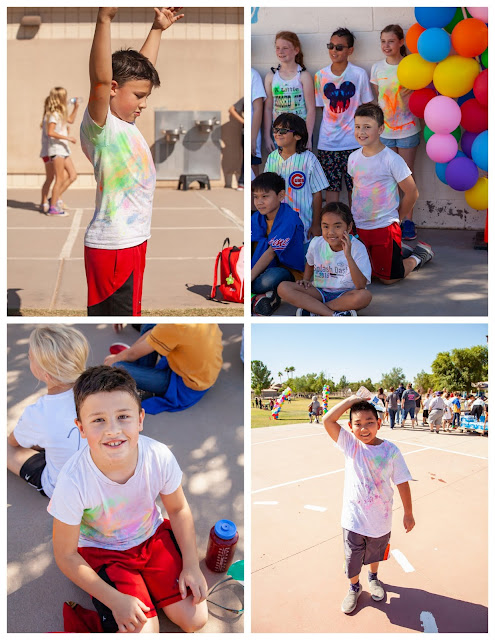 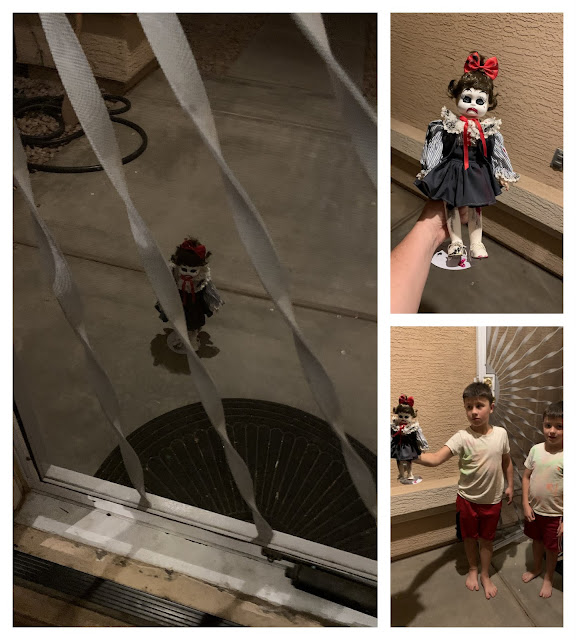 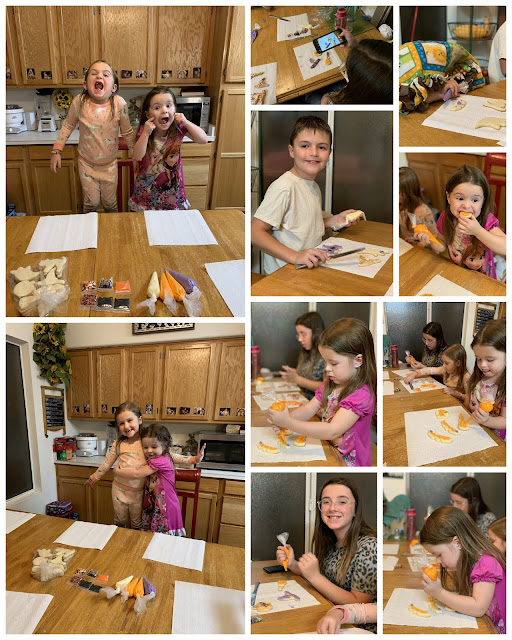 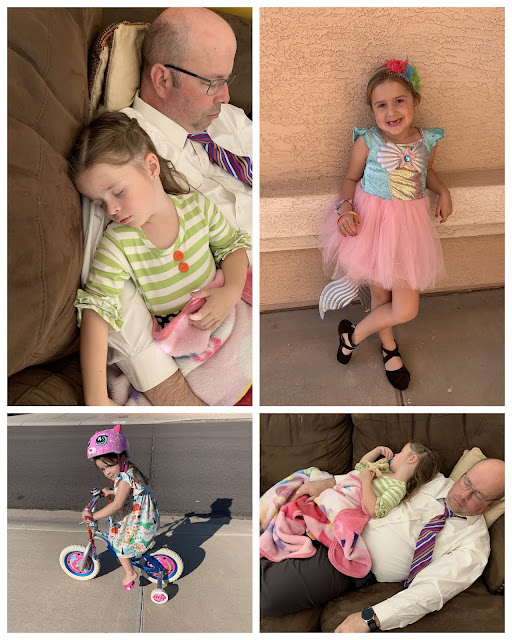 We enjoyed a special, short visit from Grandpa and Grandma Lance! They got up super early on Monday to make the 12 hour drive here. They arrived shortly after the kids got home from school, it was a whirlwind of joy and excitement. We showed them our afternoon routine with play, homework, piano, and dinner. For FHE we continued our lesson on the Apostasy. Next day Dad had all the kids exercising with him on the floor. Everett was especially keen on trying out all the exercises. Dad's duffel bag of tricks was especially exciting, one green handball was quickly lost. I found it an hour after they left! I had planned a trip to the Pumpkin Patch but our timeline for Tuesday did not work out in our favor. After dinner we headed to the park for an hour. Evelyn finally had the courage to ride down the steep hill on her balance bike...multiple times. The air was about 10 degrees cooler at the lowest point of the hill/ditch area...felt wonderful. Dad played ball with the kids for a while. Amelia and Chloe made the boys cry playing Monkey in the Middle, unfair advantage in height and skill. Mom and I played with the girls up in the park area. We topped off with some ice creams after the fastest baths the kids have ever taken. Mom and Dad were off early the next morning around 5 am. The kids were quite upset they left so quickly, on the other hand we are so please they made the sacrifice to come visit us. My dad is off to the Middle East soon for a new job lasting a few years. They drove straight through to Gilroy to visit my Dad's parents for a couple days. I quite enjoyed taking my dad to the gym with me and of course all the good talks with them both.

Wednesday was an early release day so we went to the pumpkin patch right after everyone was home from school. We went back to Vertuccio Farms for their fall festivities. We brought along Chloe, Ronald, and Jacob for a rather large group of 8 kids. Amelia, Chloe, and Jacob mostly played on the trampolines. Amelia said they adopted a cute little girl that loved unicorns as much as Mia. Everett and Ronald teamed up, they were everywhere! I saw snatches of them here and there, out of all the kids Everett and Ronald did the most exploring. Phillip and the little girls stayed with me most of the time. Josie loved the floating duckie game, that is always her favorite! It was torture removing her from the premises after 30 minutes. Then she fixated on the golf game. Phillip and Evelyn had a great time moving around the mini golf obstacles. We went on to the cow carts then the hamster rolls, and the zip line. Phillip melted my heart as he accompanied Josie each time and helped her up on the seat. Towards dusk we all met up for a turn around the corn maze! The little girls were a bit freaked out as the maze got darker. I quite enjoyed all the little smiles and time to enjoy Arizona fall weather.

Evelyn's school had a Halloween Mercado at school. All month the kids worked to earn fake dollars they could spend at the Mercado. I hear it was lots of fun! Evelyn came home with treats and a large bubble wand. She was allowed to wear her costume for the day as well. The Sister missionaries came over for dinner. Our ward has two new sisters that are quite energetic and fun. We enjoyed their visit along with taco salad and lesson.

Friday Justin flew to Idaho for some business. Josie and I went to Sonoma Ranch to cheer on Phillip and Everett as they ran laps for a school fundraiser! Both boys ran 14 laps! Towards the end of each lap the kids were squirted with different colors of liquid chalk (or something). It was fun to watch as each grade invented new ways to get colorized, Everett's grade walked a slowly as possible and jumped in the air, Phillip's grade did spins down the way! Josie was quite annoyed with the waiting around. She finally got to play with her friend Addison at the play structures. I came home to an oven dripping with pizza dough. I put in to raise, the dough was extra busy and efficient. We celebrated at home with homemade pizza and watching the new Aladdin movie. The kids were quite freaked out when an anonymous neighbor dropped off a creepy doll. I was gone to Safeway for a moment when the incident happened. Amelia and Phillip quickly passed the doll to another neighbor with shaking hands. Made me laugh.

I had a fun desert photo session Saturday evening with a young family of 3 kids. Ah, the memories of three kids and the young year chaos. I think we are finally growing as a family out of the young years. It is bitter sweet for sure. Josie is starting to put her poops in the potty, not consistent yet but getting better. That seems like the final hurdle for her to achieve the Big Girl prize. Friday Isla's mom, Vanessa gave her a cute little bike and a helmet. Josie immediately rode around the block several times. After baths we decorated Halloween cookies Sister LaBarr brought over. Phillip was in a mood, he decorated his cookie with a blanket over his head. Justin got home well after the kids were in bed.

Sunday we had a cool ward potluck after church. The theme was soup, salads, bread, and desserts. I made a squash soup with several delicious squashes my mom brought from her garden, I added an apple, sweet potato, and onion. Oh my gracious, it was delicious. The kids played in the gym while I attended our finance class. Justin and Josie fell asleep in the couch right before the potluck so they did not come to either function. In between church and the potluck I made two batches of cookie dough, peanut butter and chocolate chip. Right after class I baked up the cookies, just in time for the Sanders family to come enjoy a treat with us. They moved in earlier this year and seem to need friends in the ward. We swapped several stories and lots of laughs.