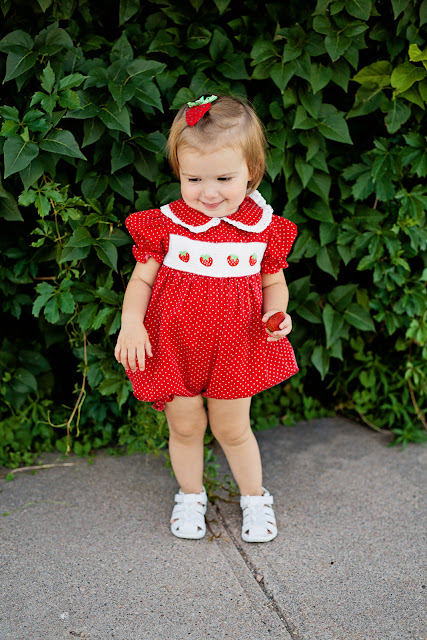 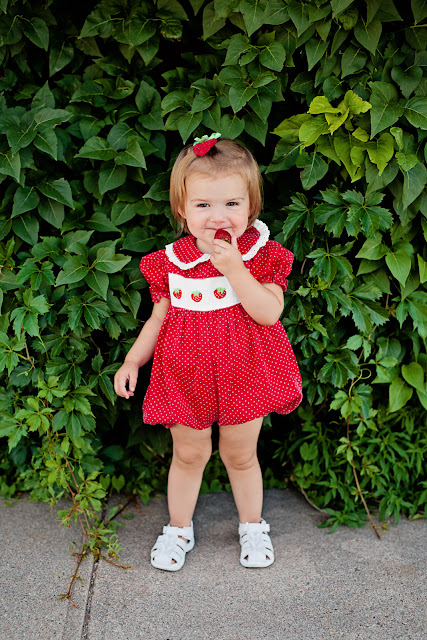 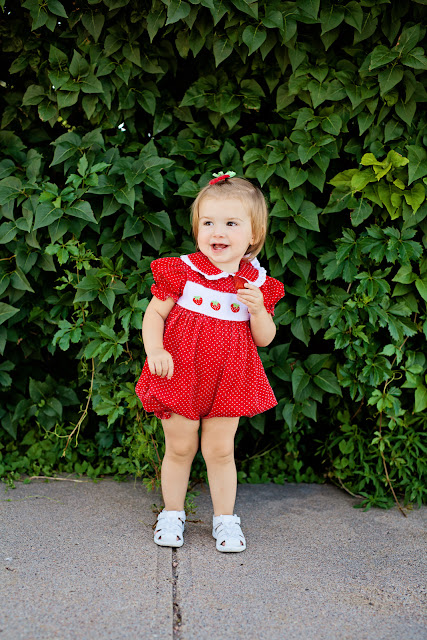 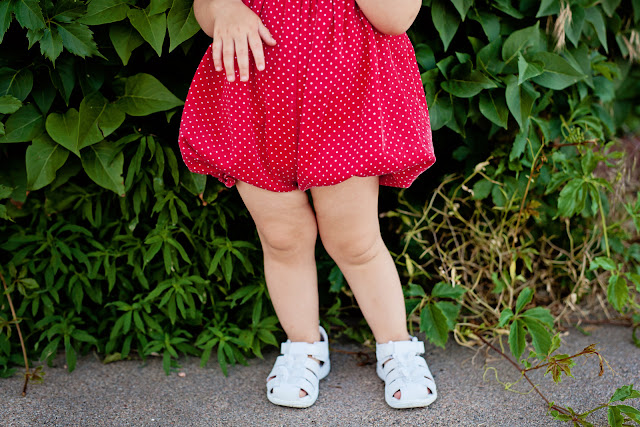 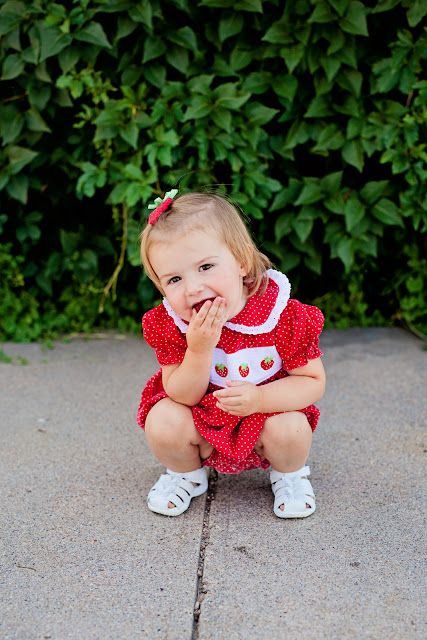 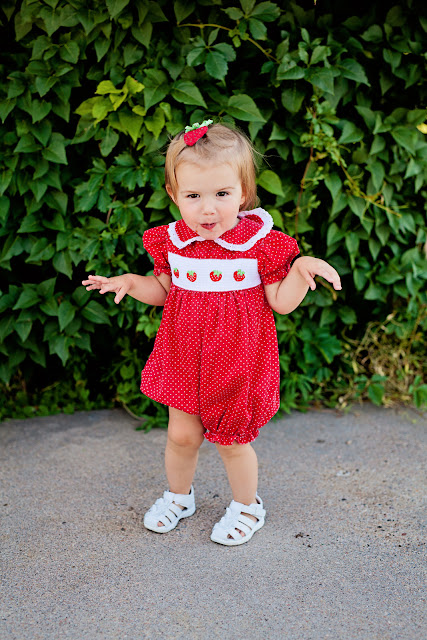 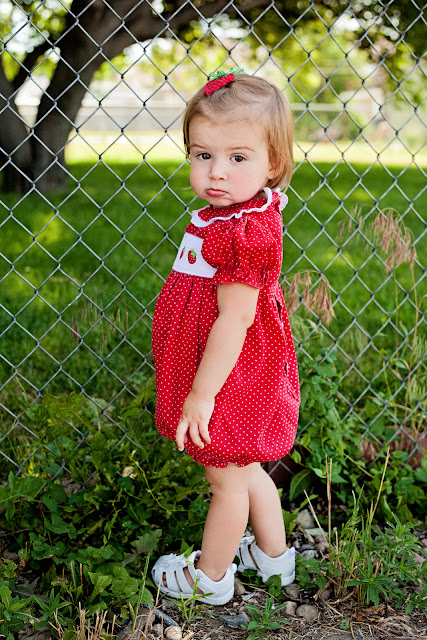 It was the Blob 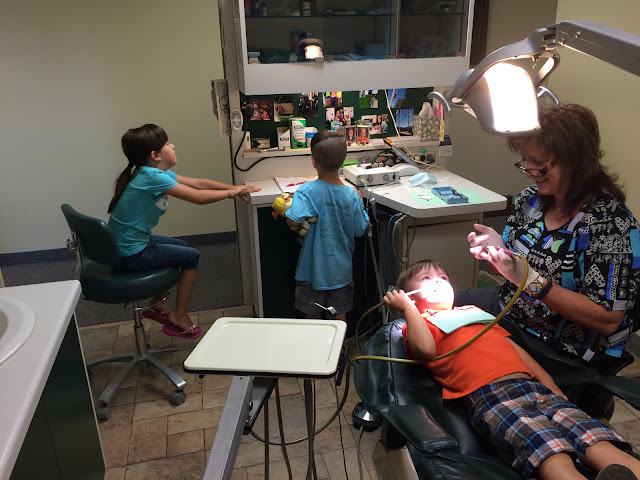 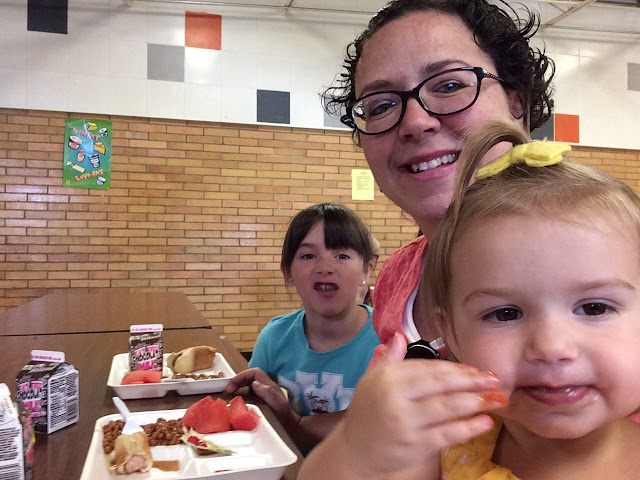 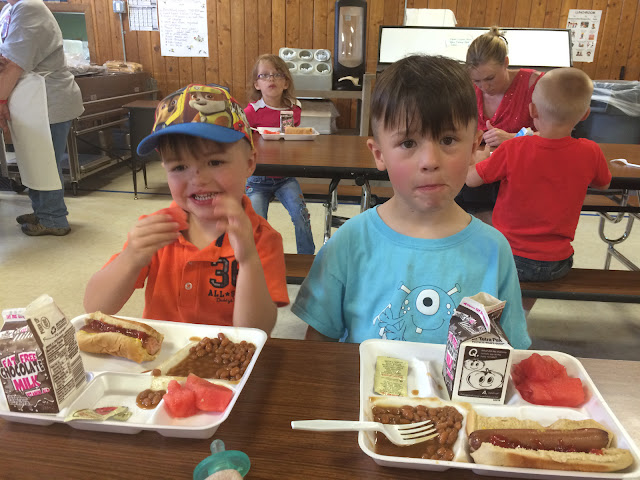 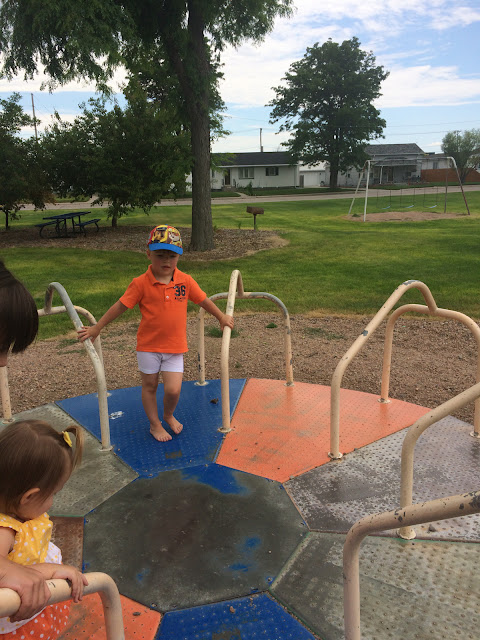 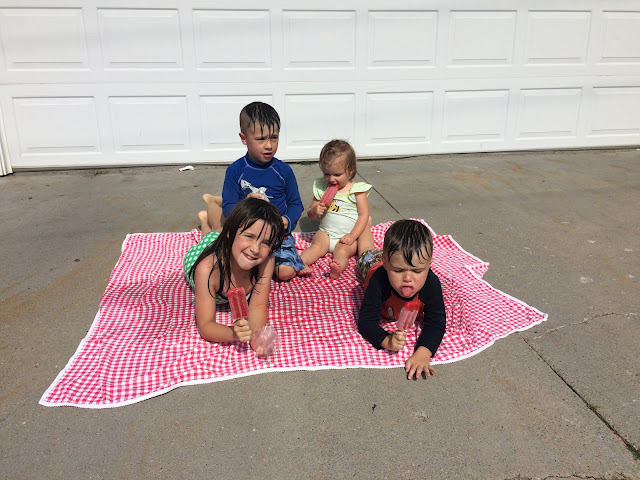 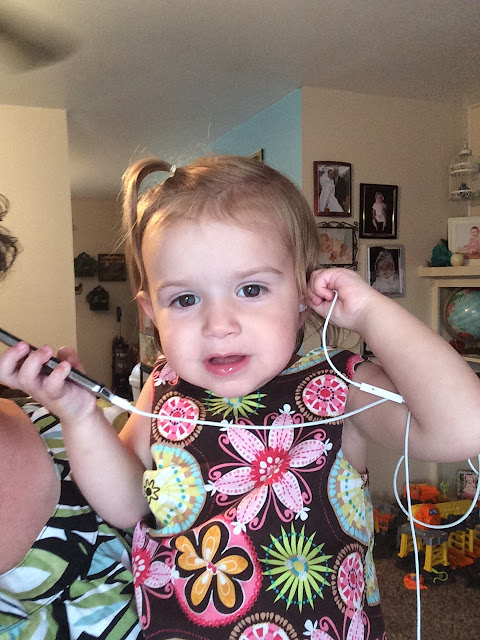 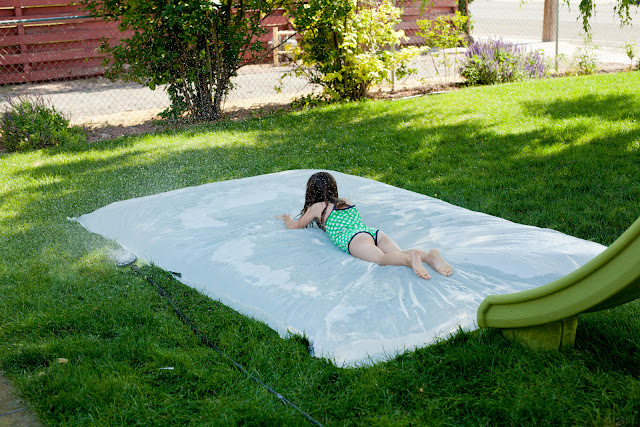 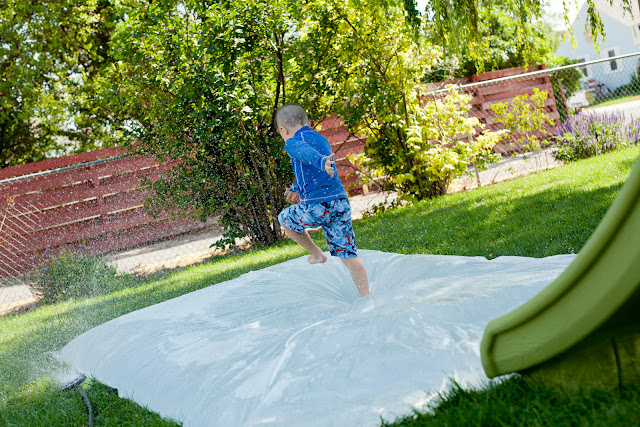 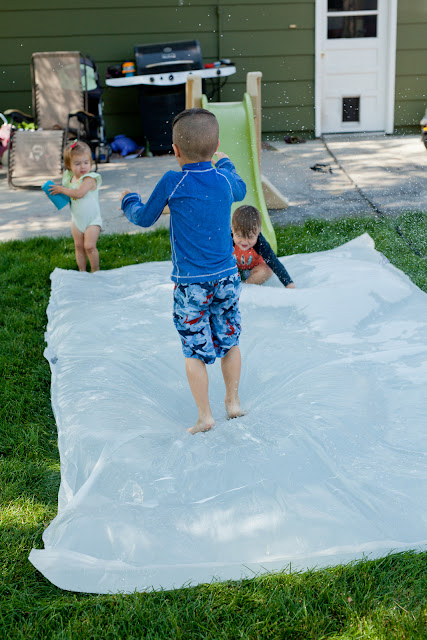 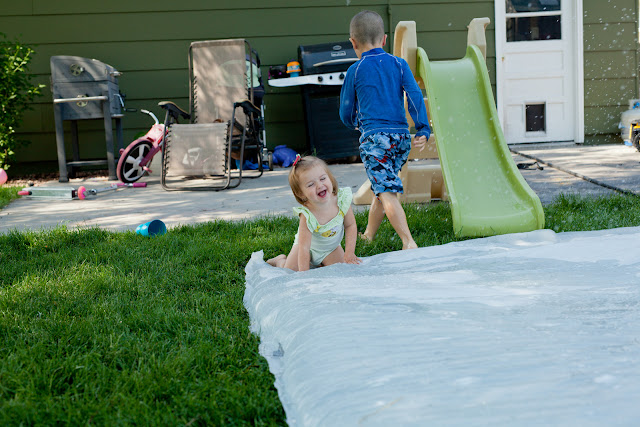 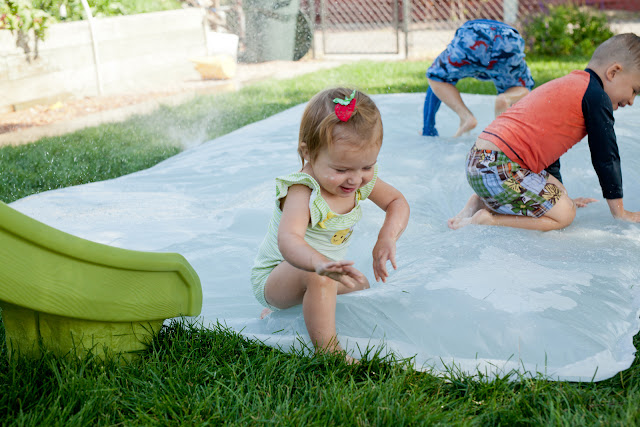 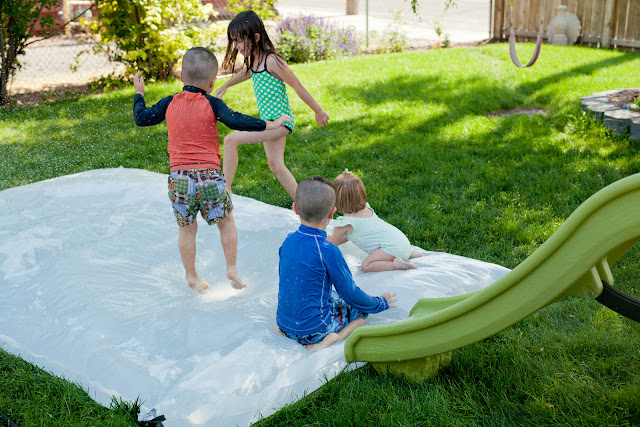 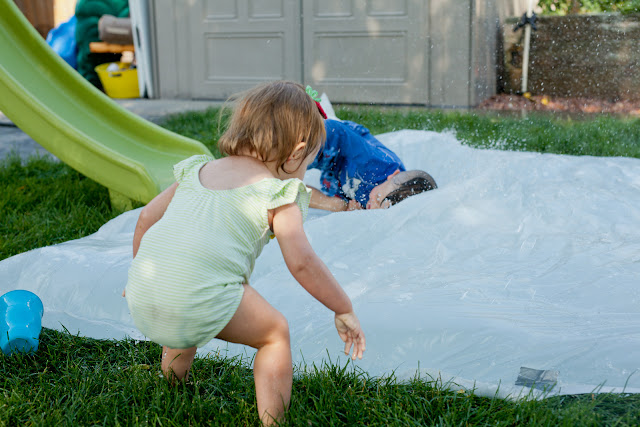 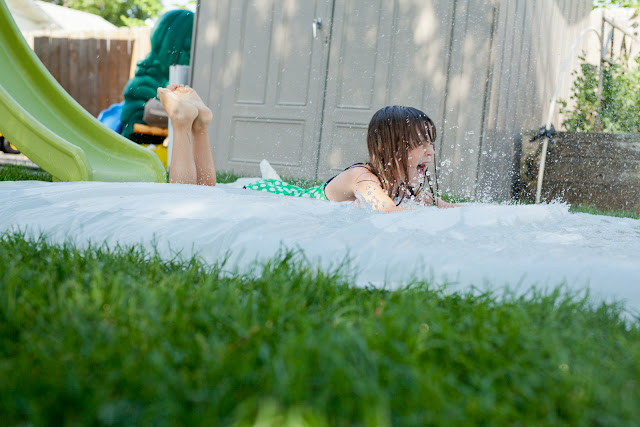 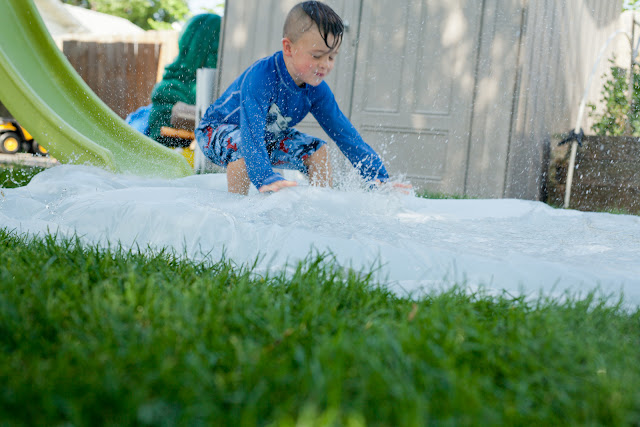 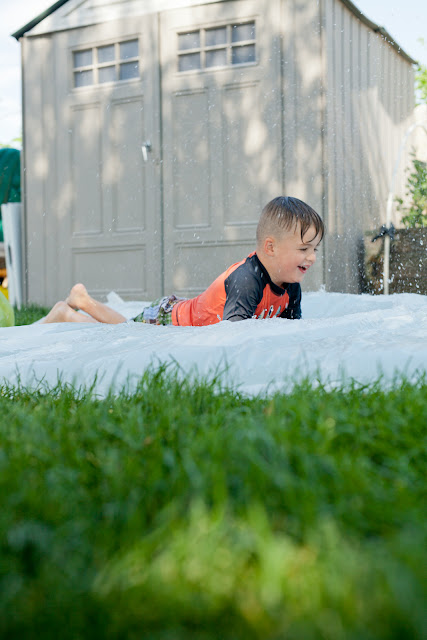 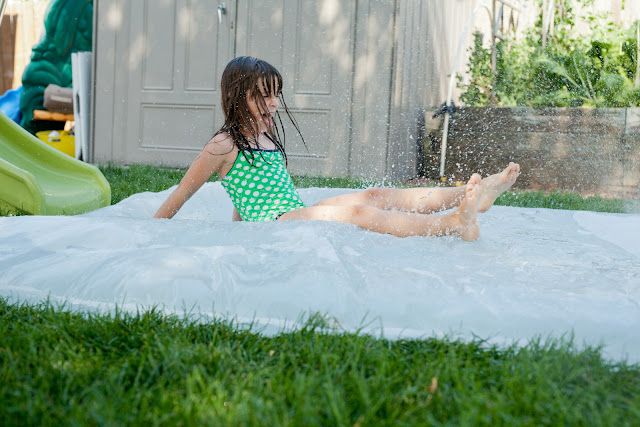 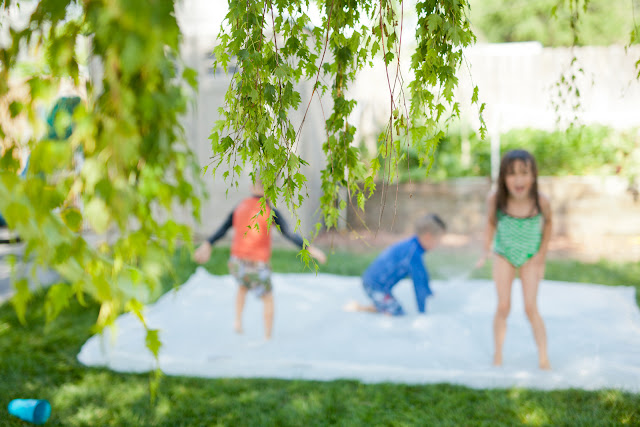 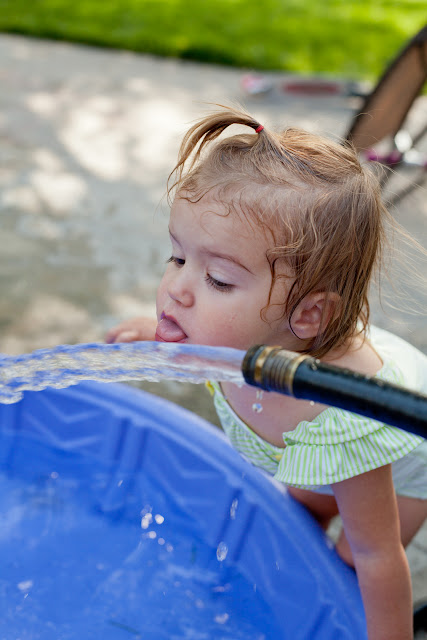 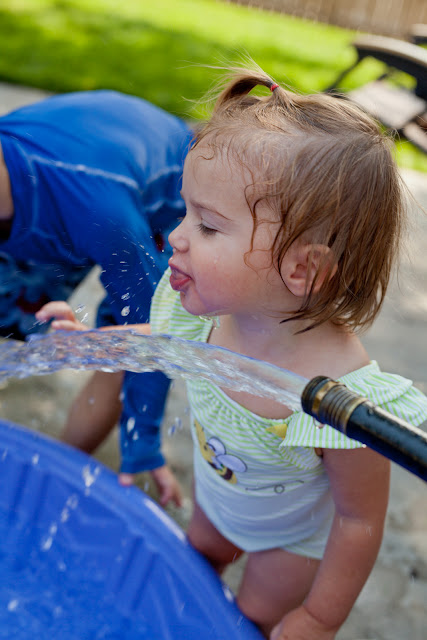 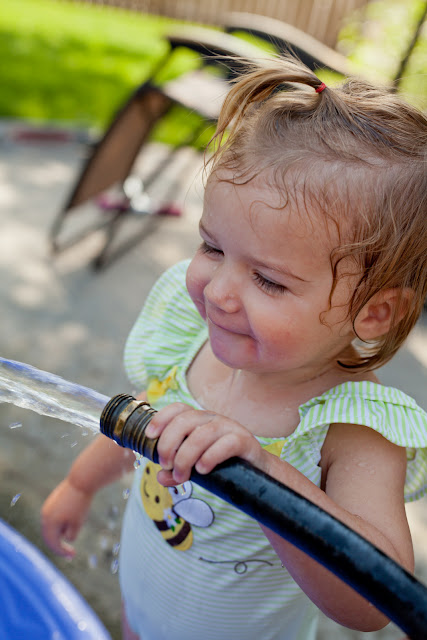 Saturday we took the kids to see the Nifty Fifties play our local kids put on. It was fantastic. One of the songs totally stuck with Amelia, "It was the Blob." The teenagers in the show sang about watching The Blob movie using every descriptive word to describe the blob (messy, gooey, sludgy, pudgy, ooey, hunk of jello). The song inspired me to finally make our own blob. So! The kids helped me lay out all the 7mm plastic, cut it to a rectangle, seal the edges with an iron and parchment paper. The blob filled with water while the kids ate lunch. I put the blob under the tree so it would not scorch the grass. We waited until Evelyn woke up from her nap, that was torture. The kids played with play dough while waiting through nap time. The blob lasted about an hour, which is more time than I originally gave it. I had a hard time sealing the edges, the iron kept making small holes instead of sealing, even with the temp turned down. I used gorilla tape to sort of seal the larger holes and the hose entry hole. Amelia positioned the slide in front of the blob, I turned on the sprinkler to wet down the blob and slide. The rest was history. It's been a while since I heard such excited laughing. Phillip was crazy man all over again. He actually punched a hole in the plastic with his heel. After that big hole the blob became a whale. Evelyn seemed to enjoy the outskirts of the blob. She loved drinking from the hose, based on the size of her cute smiles. The kids settled down after the fun with strawberry Popsicles in the sun to warm up.

The Call family invaded High Plains Dental early Monday morning. Justin started the slue of appointments. Phillip volunteered to go second. He was very excited to show the Dr his dragon breath. Everett kept biting the dental hygienist as his mouth was hard to keep open. He needs more help brushing his teeth. Amelia's teeth were also cleaned around her braces. She got another cool toothbrush with a Christmas Tree on one end to clean around her braces. Evelyn sat on my lap while I got my teeth cleaned. She sat completely still for 20 minutes! Since we were out and about we visited the consignment store and Salvation Army. The kids voted for lunch at North Elementary since it was close to lunchtime. I was surprised the kids demolished entire hot dogs, servings of bakes beans, and watermelon. Evelyn ate as much or more than Amelia. We spent the rest of the time until naps playing at parks on the North side. Everett decided his pants got too wet to wear from a trip down the slide. Next thing I knew he was running around in his undies. Phew, it was really hot and humid. I, for one was grateful to get back home to air conditioning. For FHE we took the family to see Inside Out. That was an experience I'll not soon forget. Remind me that Evelyn is not old enough to sit through a movie. She sat down long enough to finish half of her sucker, a sip of soda, and a 1/4 box of popcorn...in other words she got through the previews. Before the movie was half over she spilled an entire bucket of popcorn, then snacked on floor popcorn on occasion; she spilled my vat of sprite down the aisle. It did look cool racing down the aisle, illuminated by the movie lights. Little stinker then stomped on the cool liquid trails and ate ice off the floor. We ran around the lobby for most of the movie. Phillip was quite impressed with the "Anger" character. I thought the movie was a very good depiction of how emotions work inside our brains.

Wednesday we had quite the adventure visiting Avery at her home. I wanted some outdoor photos of baby Adalynn. The biting flies loved my ankles, thankfully the flies did not enjoy the baby. Halfway through photos my camera battery died. I had to run home and get a fresh one. The kids were starving so we met Justin at McD for the first time in months. The Sidney McD is about the worst one on the planet. Amelia whined the entire time, she did not want food. I ordered her some chicken nuggets. She stared at her meal for 5 minutes, whining that she was NOT going to eat lunch. Soon her meal was completely gone. Stinker pot. Amelia, Phillip, and Everett completed the summer reading program! Each kid earned a badge, pencil, certificate, and $5 from Diary Queen! They really enjoyed the super hero theme. We can still attend lunches and craft times for the month of July. The kids got their first installment of allowances for earning chore buttons. Everett was so adorable after I gave him $4 for all his hard work. He earned over 13 chore buttons. Phillip and Amelia both earned the base amount to earn an allowance. That kid loves to do chores!! I ended up letting him choose a more expensive toy this time for all his hard work. He was delighted!

I had the most frustrating experience Wednesday morning with Phillip. I finally scheduled an appointment for him to get a full-range hearing test. The audiologist came and grabbed him while I was busy with Evelyn. He took him to an undisclosed room and started the test without me or any explanations from me. Then he brought him back and announced in the lobby that Phillip had 30% loss in his left ear and 25% in his right hear. His next advice was to go see Dr Shaw again. I about lost it. His mannerisms were atrocious. I did not expect to receive that news in the lobby and without pretense. I felt floored and without direction. I came to him on advice of Dr Shaw. Laura Call was the best source of information and direction. Her son has significant hearing loss, so has dealt with many doctors. She explained that the first step is to determine if he has fluid behind his ear drums. An ENT specialist can do that, put in tubes to help the fluid drain out. That was easy! Done, he has an appointment next week. Maybe we can get more answers instead of lame declarations. Grrrrrr.

Thursday Ella came to visit us for the afternoon. The girls had fun playing with Evelyn. Ella walked her around the block 20 times or more. Evelyn can now say "Ella Haley" quite clearly. Amelia was quite impressed with the Haley's fireworks stand. They got to run a stand this year for a close relation. Seemed like they worked up a "hot" business! Amelia spent $2 on ground flowers. She was over the top excited. I am quite "over" the fireworks this year. Our neighbors shoot them off until 10:30 or 11, often right across the street from the kid's room. It makes it very hard to get the kids to sleep at a decent time. Amelia practiced a song, "Bruises" by Train, for a talent show she wanted to put on at Heidi's home. We heard a lot of flat, mostly in tune singing over the past week. Evelyn soon caught on that "Let it Go" was also available on the iPod. Soon she was tunelessly singing "Let it Go" over and over.