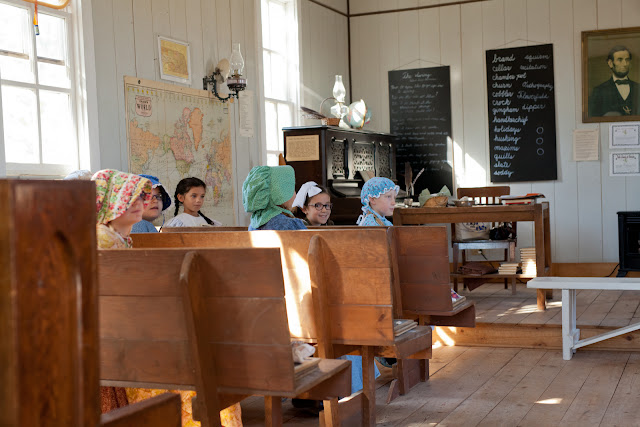 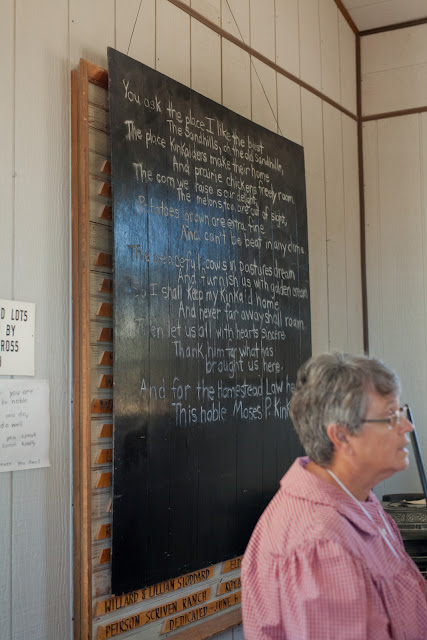 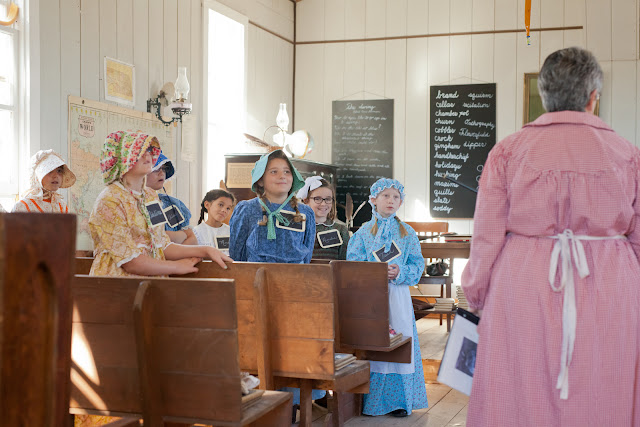 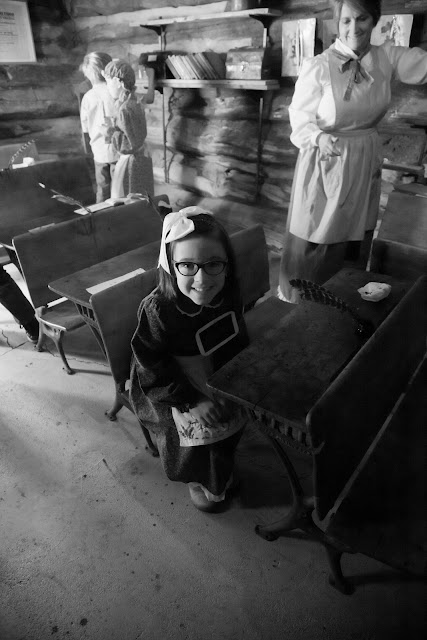 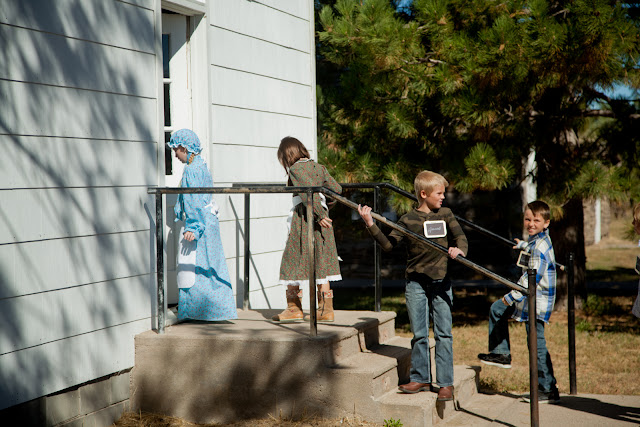 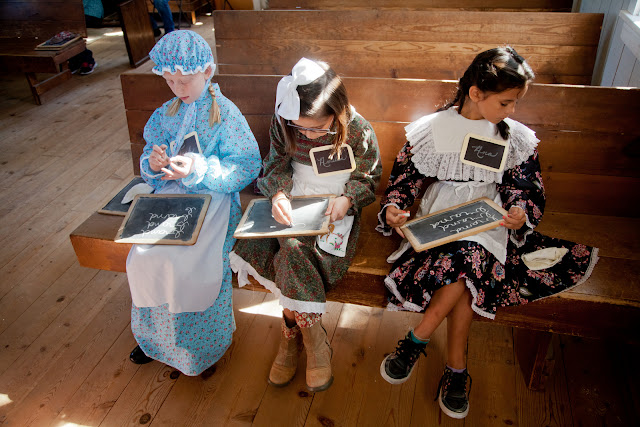 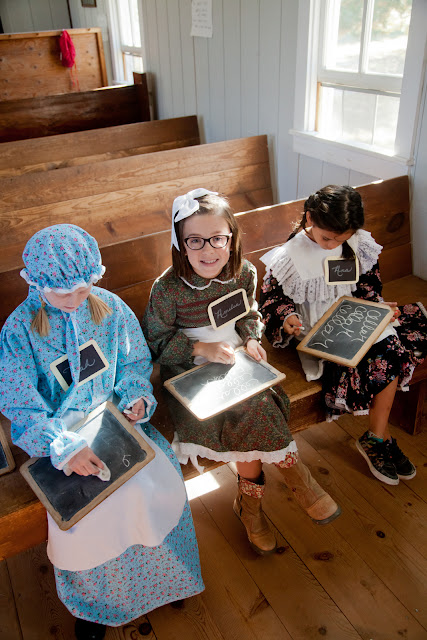 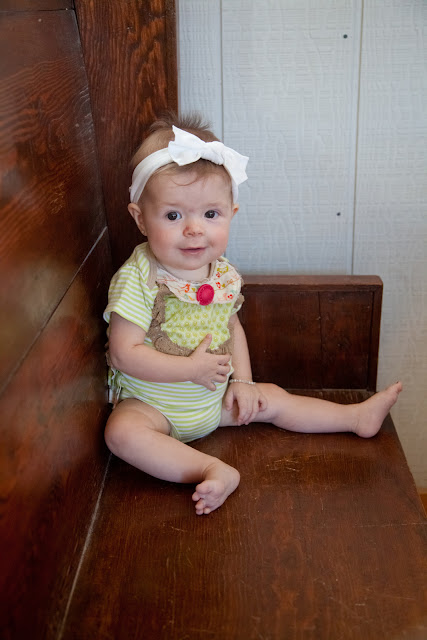 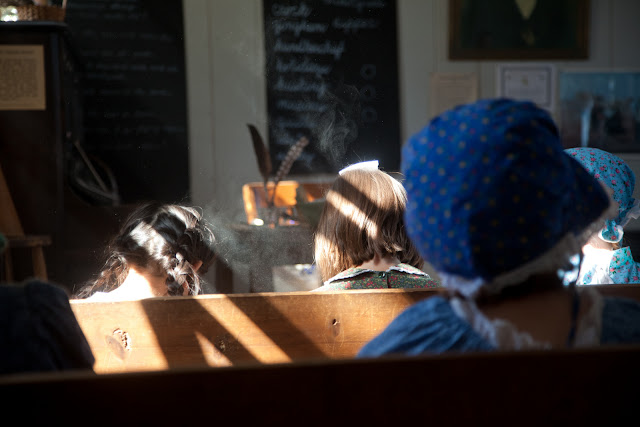 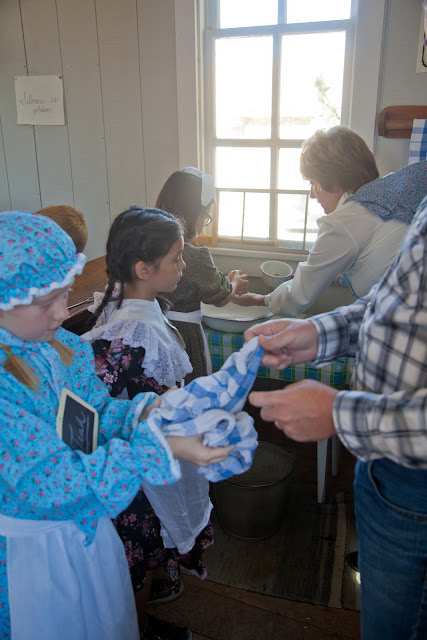 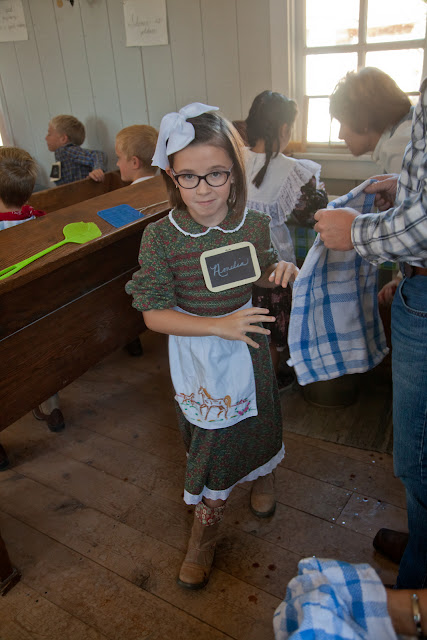 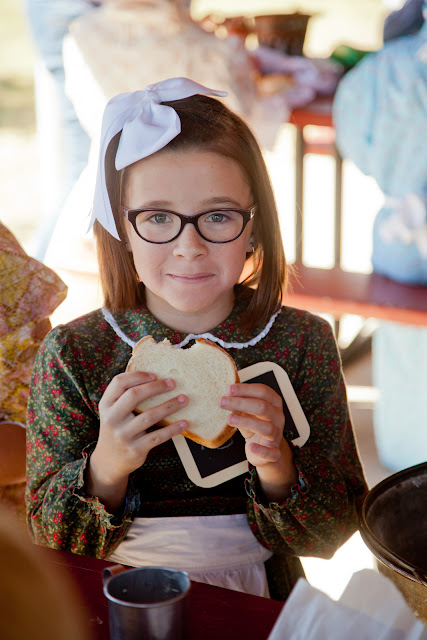 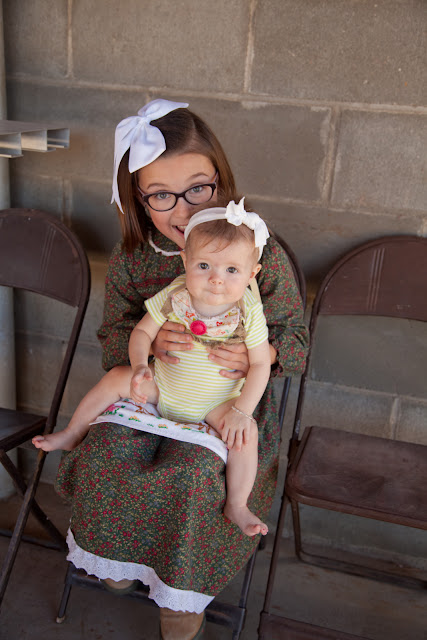 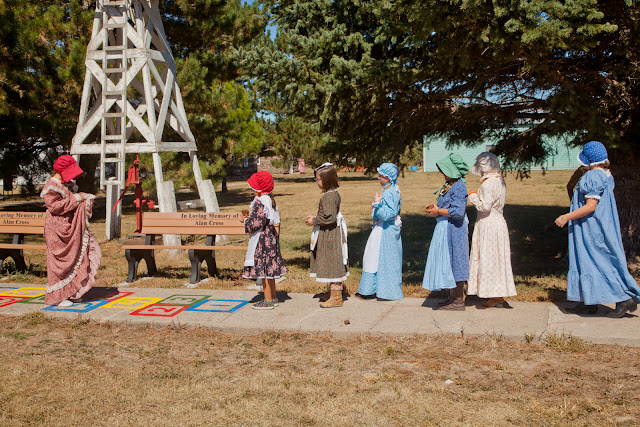 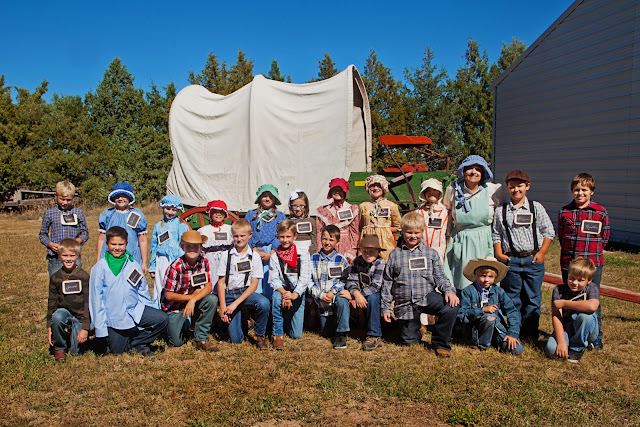 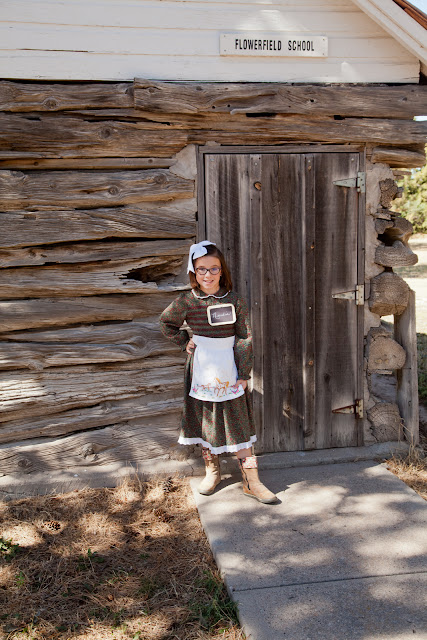 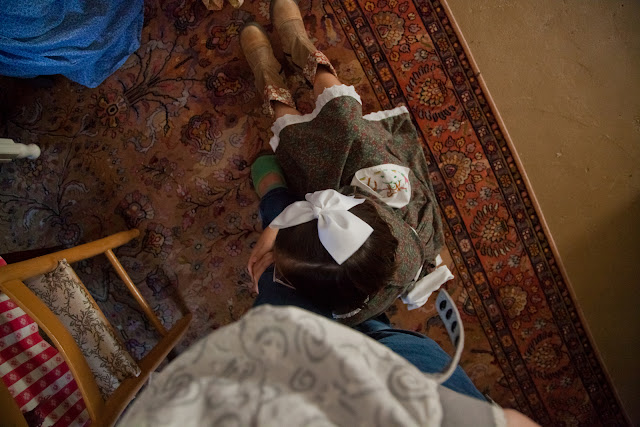 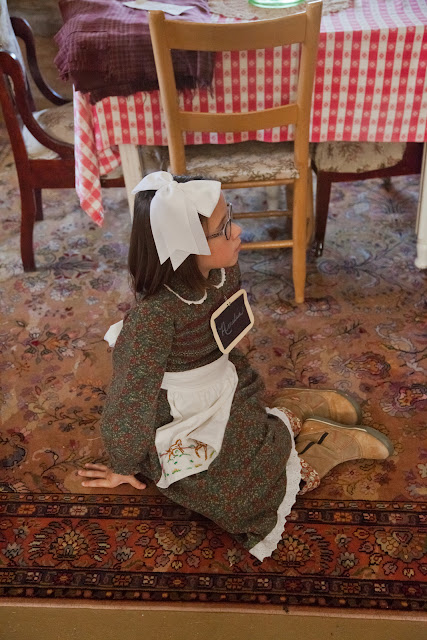 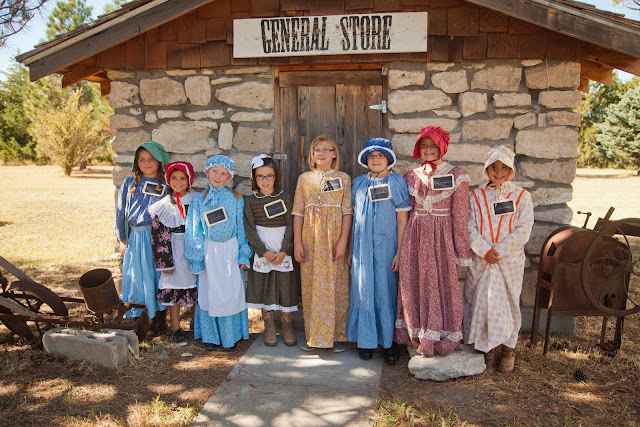 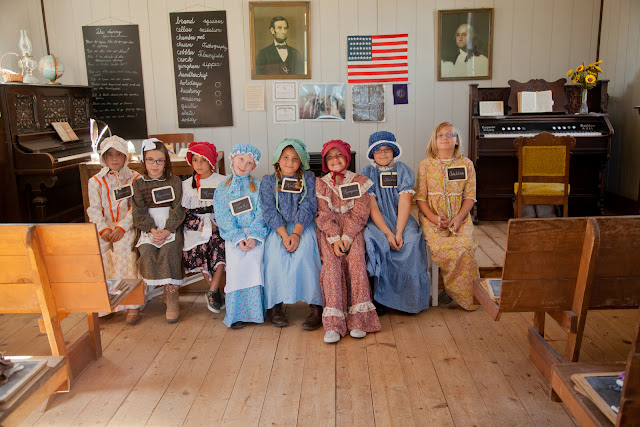 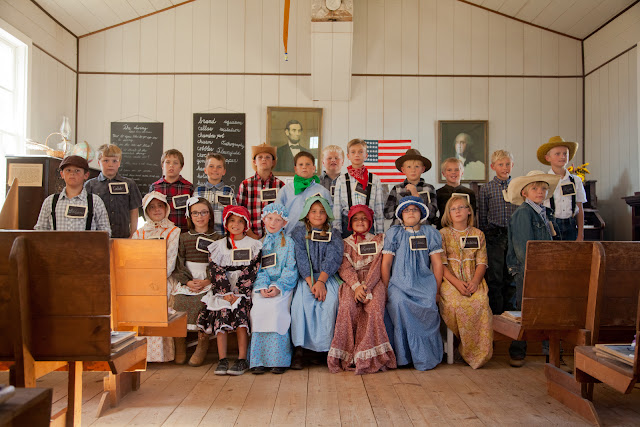 Tuesday Amelia had a singular experience at the Flowerfield school. It is a country school in Banner County that is structured after education back in the 1800s. The kids dress up as best as they can in era clothing. The school lends out dresses and bonnets for the girls. We had a dress and bonnet, I could not find the bonnet, so Mia went with just a hair bow. The kids left school around 8:10 and bussed to Harrisburg. I dropped off Evelyn for a day of fun with her friend Elliott, then made the trek a few miles behind the bus.

School was held in the chapel because it was larger than the actual school. Mrs Hersel was the teacher of the day. She started off the school day with introductions, to each child she said something like "how was the pony ride? did you get your butter churned? and how many eggs did you find today?" The kids thought that was pretty silly. Teacher kept saying "Silence is Golden!"

The teacher gave a lesson in Geography. The kids learned all about how Nebraska was settled. Nebraska had the first claim during the Civil War when the land claim law went into effect. A soldier went to the Lincoln land office at 12:01 am on Jan 01, filed a claim then went back to finish fighting the war!

Miss Hersel split the kids into 3 groups: penmanship (taught in the log school house), orthography, and reading. Amelia had penmanship first. Mrs Roach taught the kids to use real ink and quills to write on paper. It is harder than it looks. She went to orthography next. A row minder passed down slates, then chalk, then a rag to wipe of boards. She had to write each spelling word 6 times. They had a spelling bee back in their real classroom. For reading Mrs Hersel lovingly handed out McGuffey Readers. At first the school had 1 reader but a kind gentleman donated 10 more priceless books. The kids read sections out loud. Together the kids had an arithmetic lesson, they listened to problems then wrote down the numbers and computed the sums. The quips the teacher threw out made me smile.

The hygiene and rules lesson was pretty funny. The kids learned about punishments in the 1880s. One boy had to stand with his nose pressed in the highest circle he could reach, he was talking to a girl. A girl wore the dunce hat because she did not practice her spelling words. Then the teacher raved over the medicinal properties of lye soap. Each child had to wash hands with water a young boy fetched from the well. Lunch was eaten outside. The kids had to bring a lunch wrapped in wax paper and carried in a pail or wrapped in a cloth. Water was poured into tin cups for each child. After lunch the kids could play hopscotch (girls), or chase (boys). The genders were not allowed to mix. After lunch the kids performed a recitation of "Try, Try, Again."

The next hour the kids toured a log cabin decorated true to the times, a soddy house complete with dripping dirt and insects borrowing into the house, a general store, and a small museum!

All the kids were ever so excited for this particular field trip. Josie did exceptionally well! That baby is so quiet, well, as long as I hold her. She murmured to herself a bit but mostly sucked on her hands and sat contentedly watching the strange sights. I was so pleased that I went, it was hard to leave my house dirty, clean laundry piled on the floor, dinner unmade, and dishes in the sink. It was well-worth the extra stress to make this special memory with Amelia. We got to hold hands and sit next to each other several times during the day! I loved all the fleeting glances and shy smiles from her. The docent of the museum turned out to be a member of our church! She knew Justin from his visits to the Chimney Rock ward while he was on the High Counsel.

I was worried about Evelyn because I left her with Jenny (and Elliott) in a foul mood. She perked up quickly once Elliott woke up. They had a great day going to the park, watching Frozen, coloring, eating chips, and being silly toddlers. Balm to my soul! I am relieved she had such a great day!