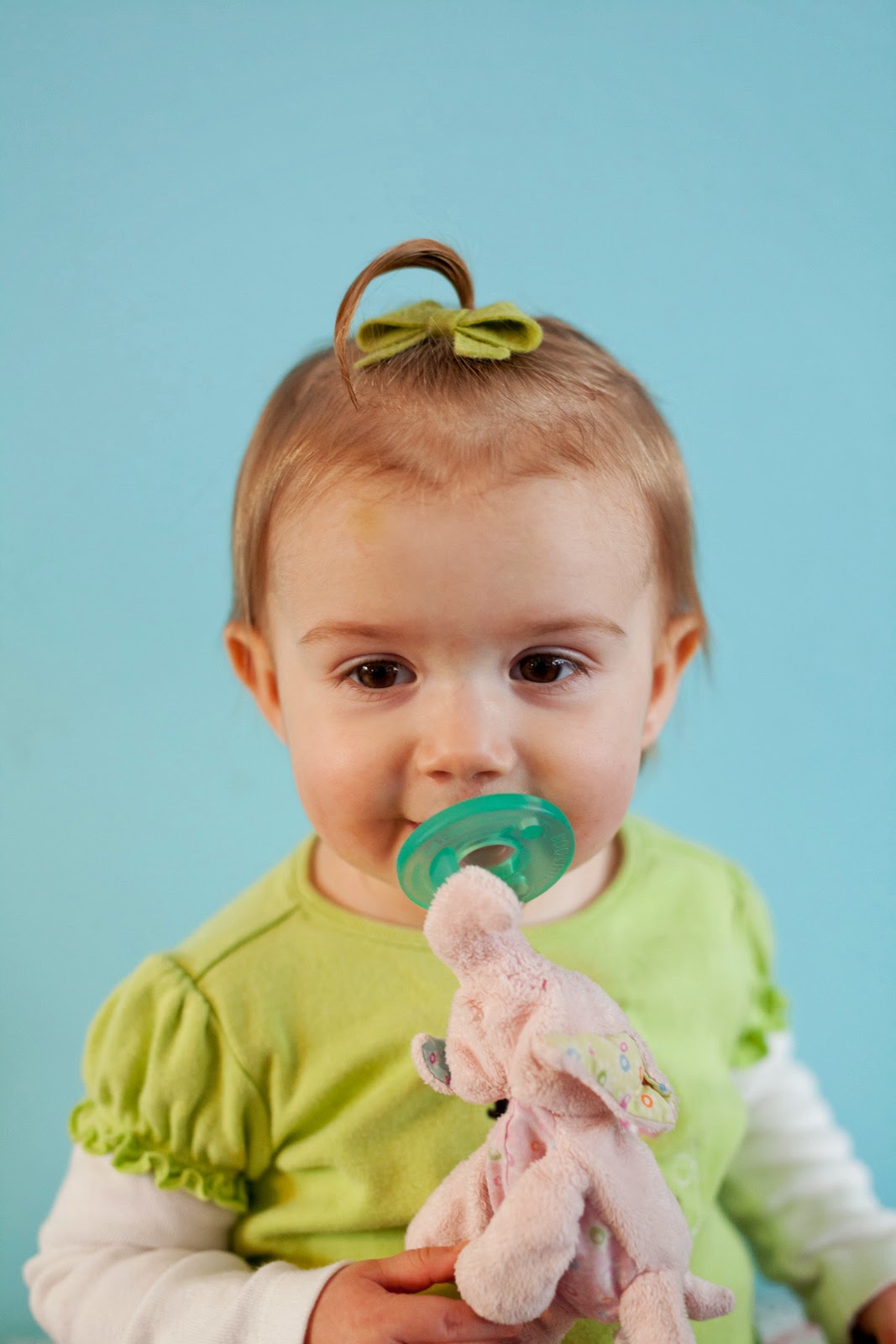 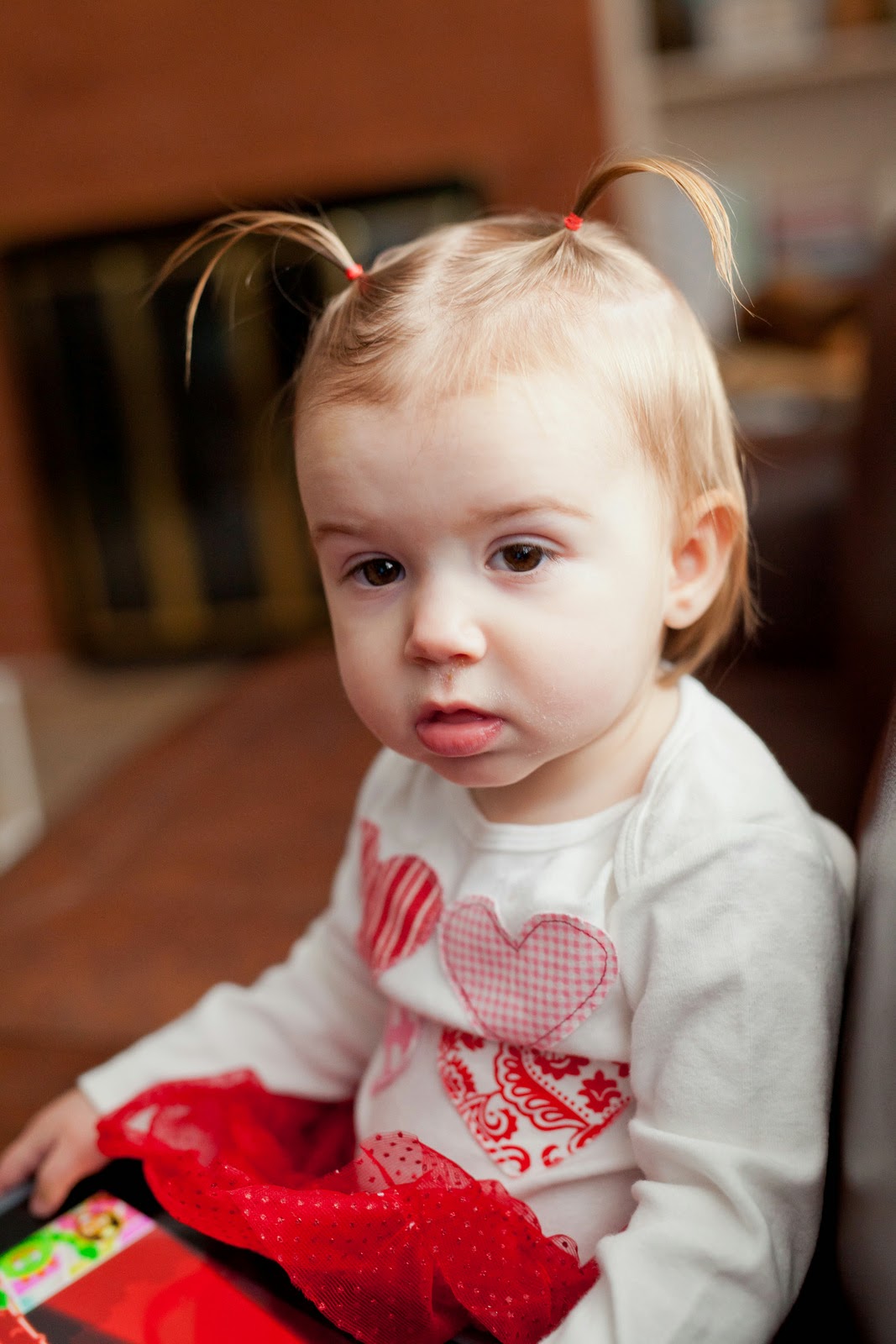 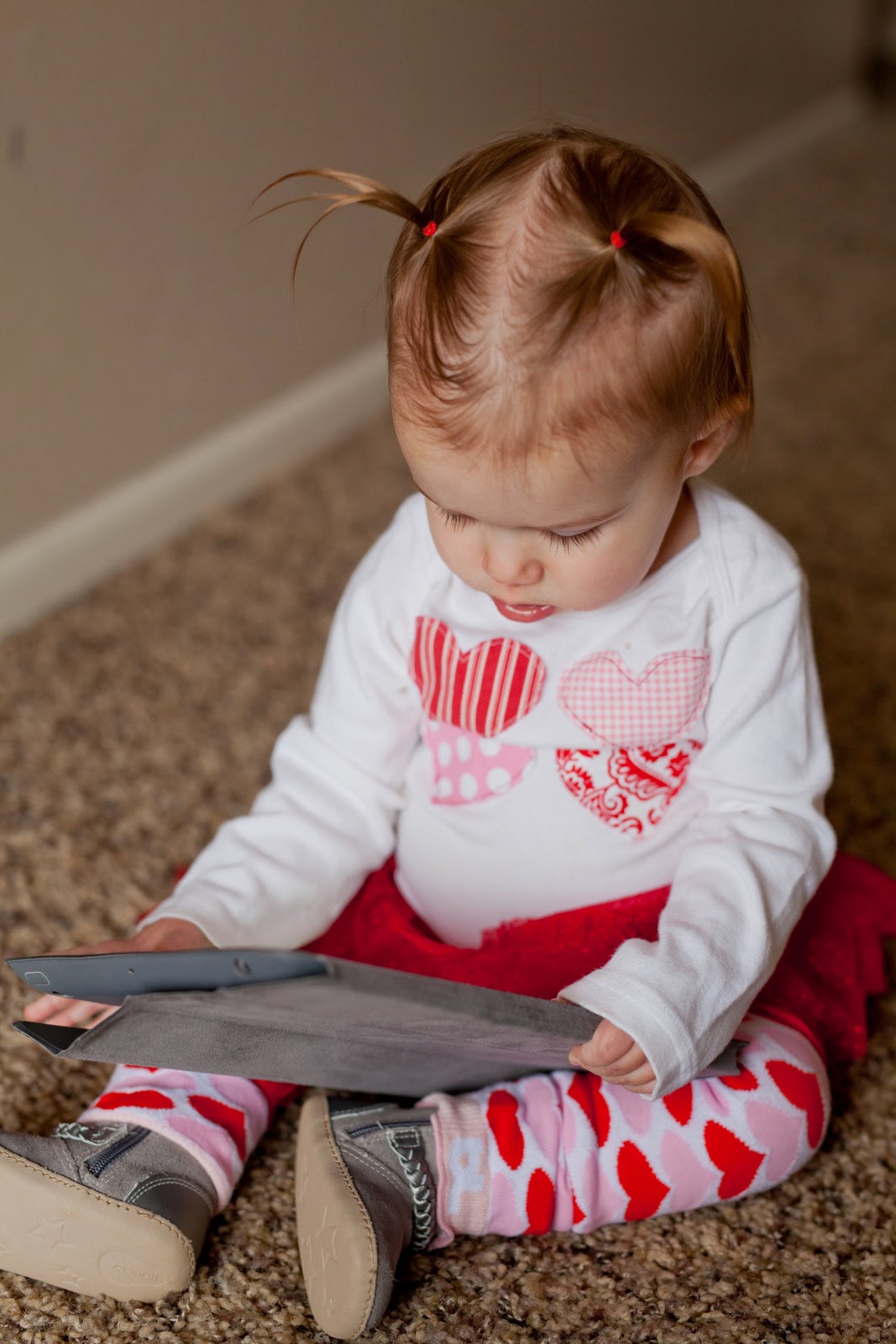 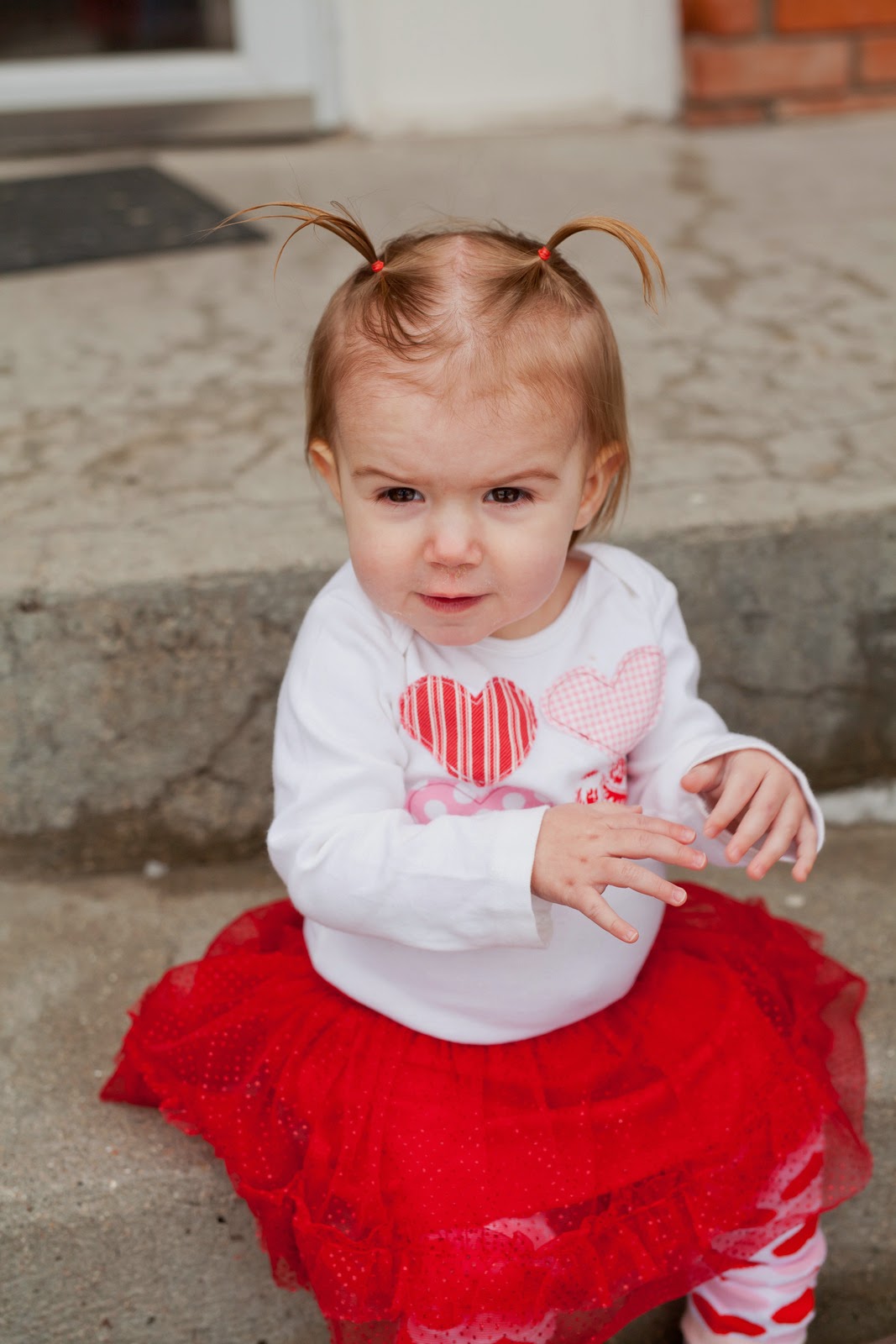 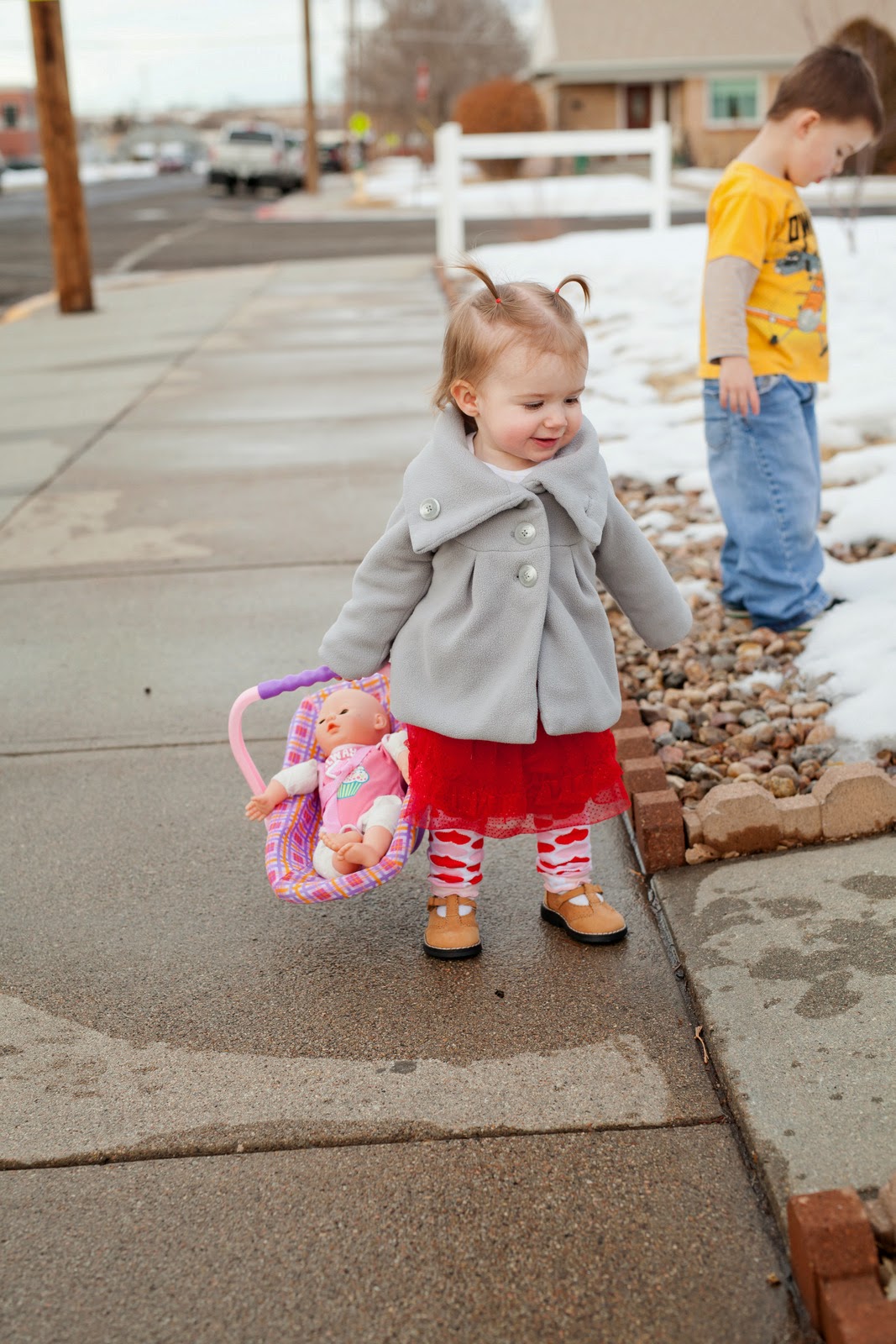 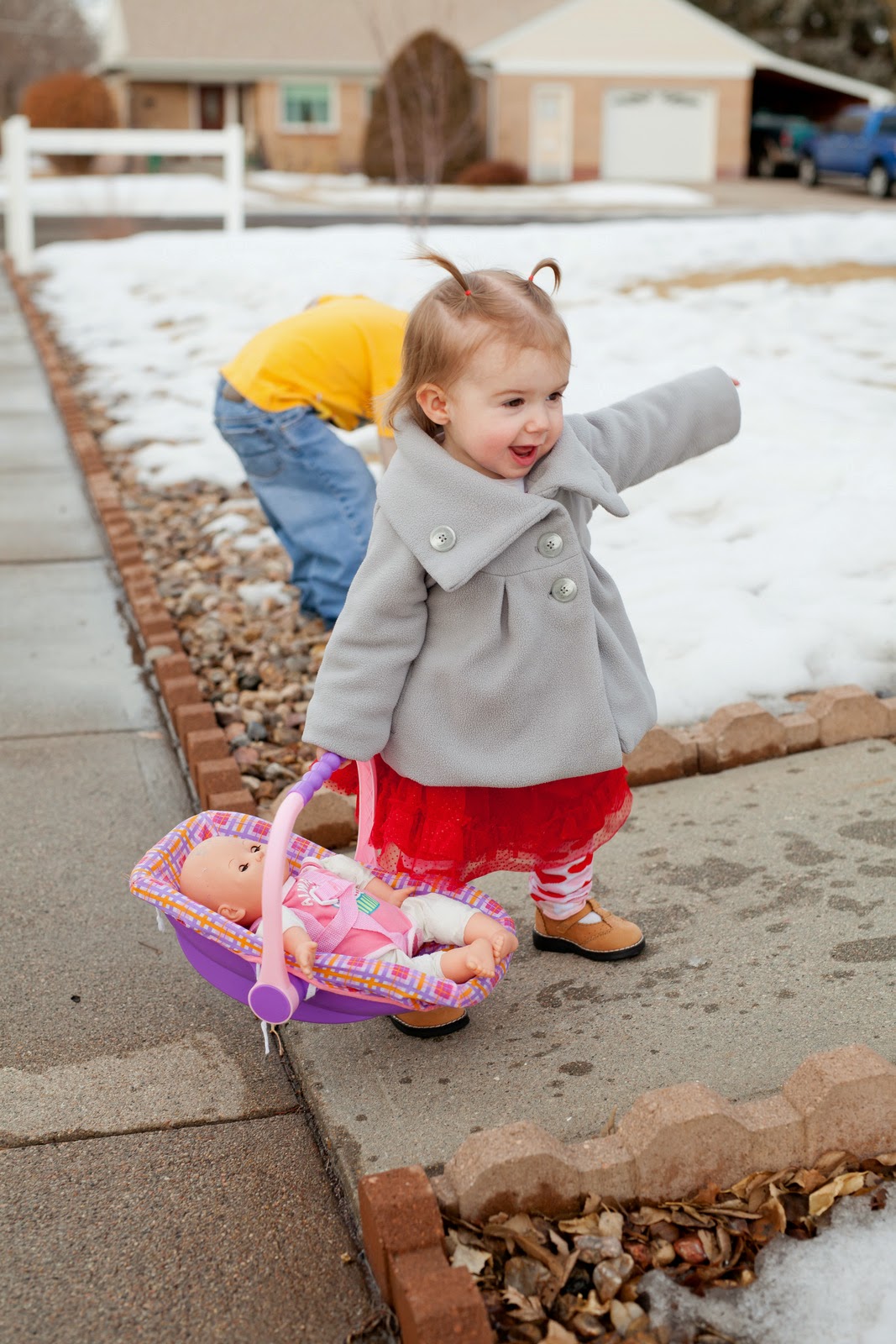 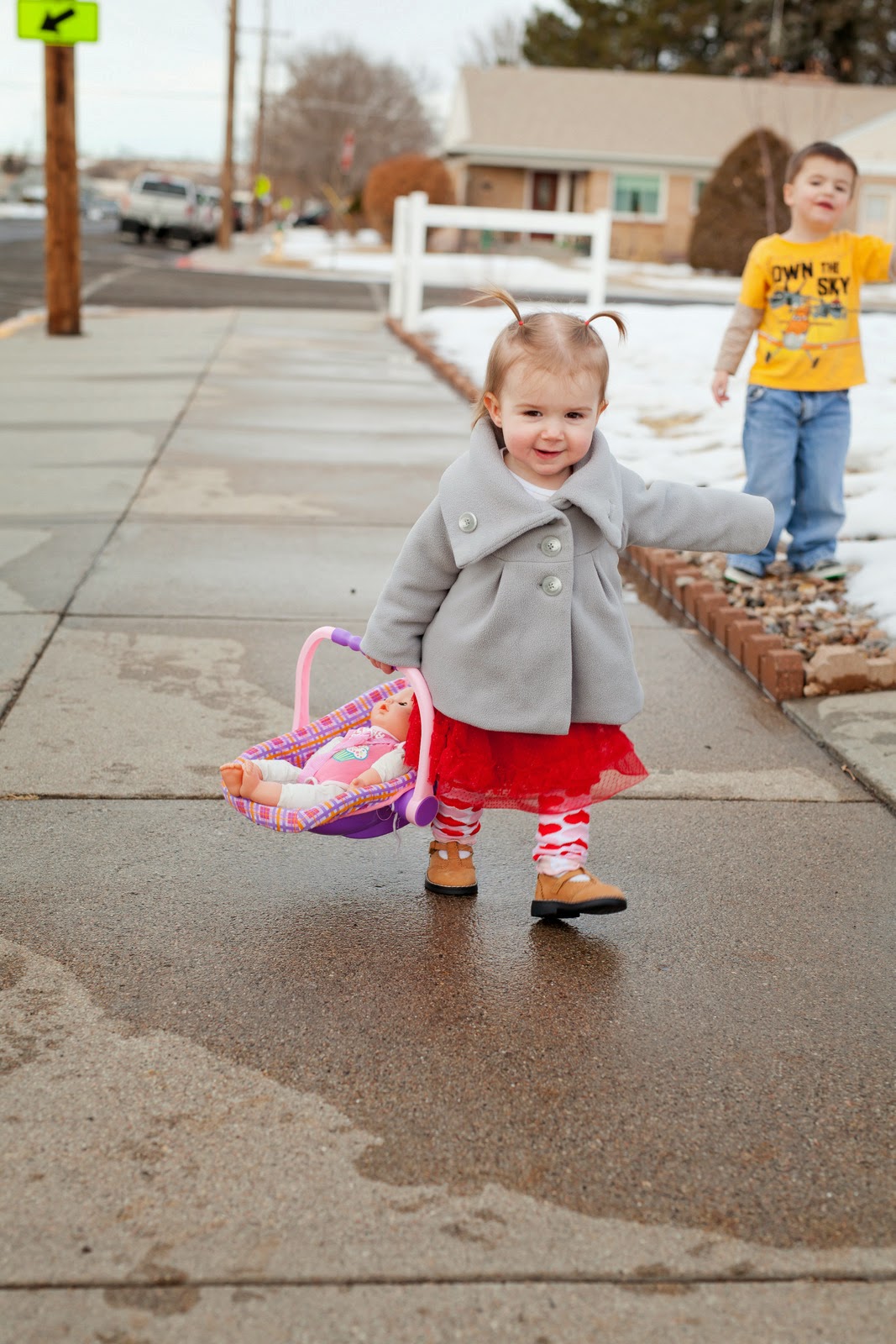 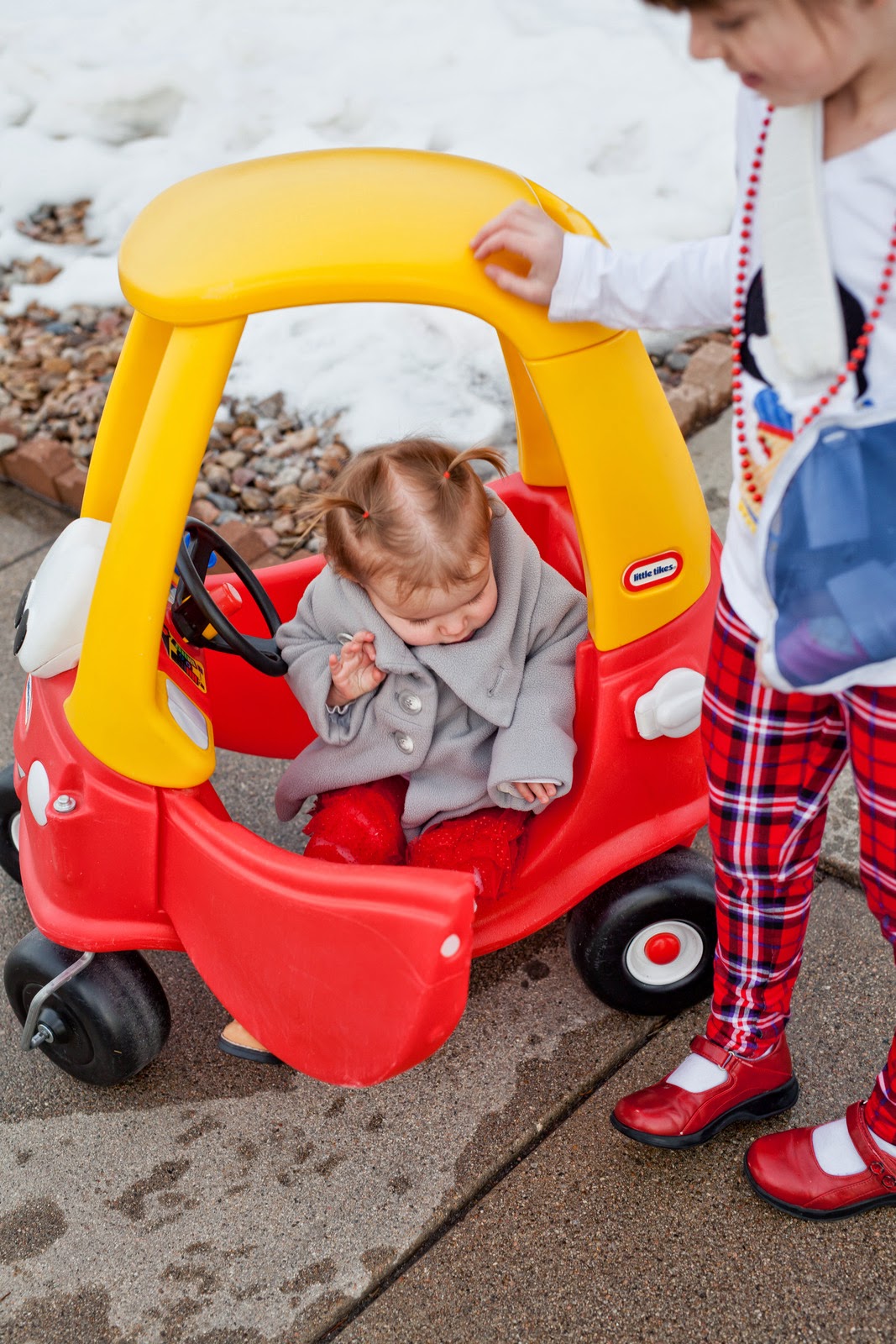 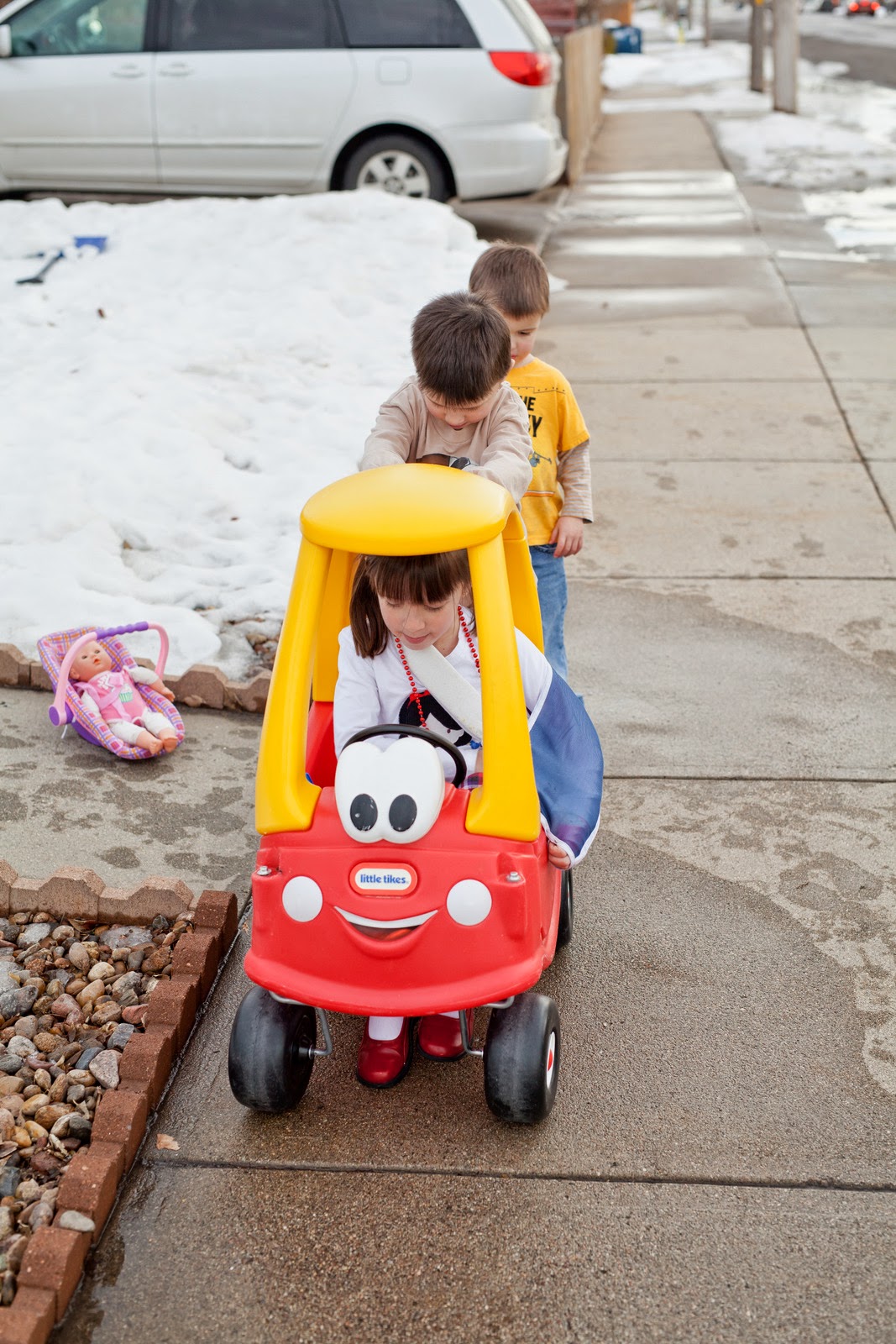 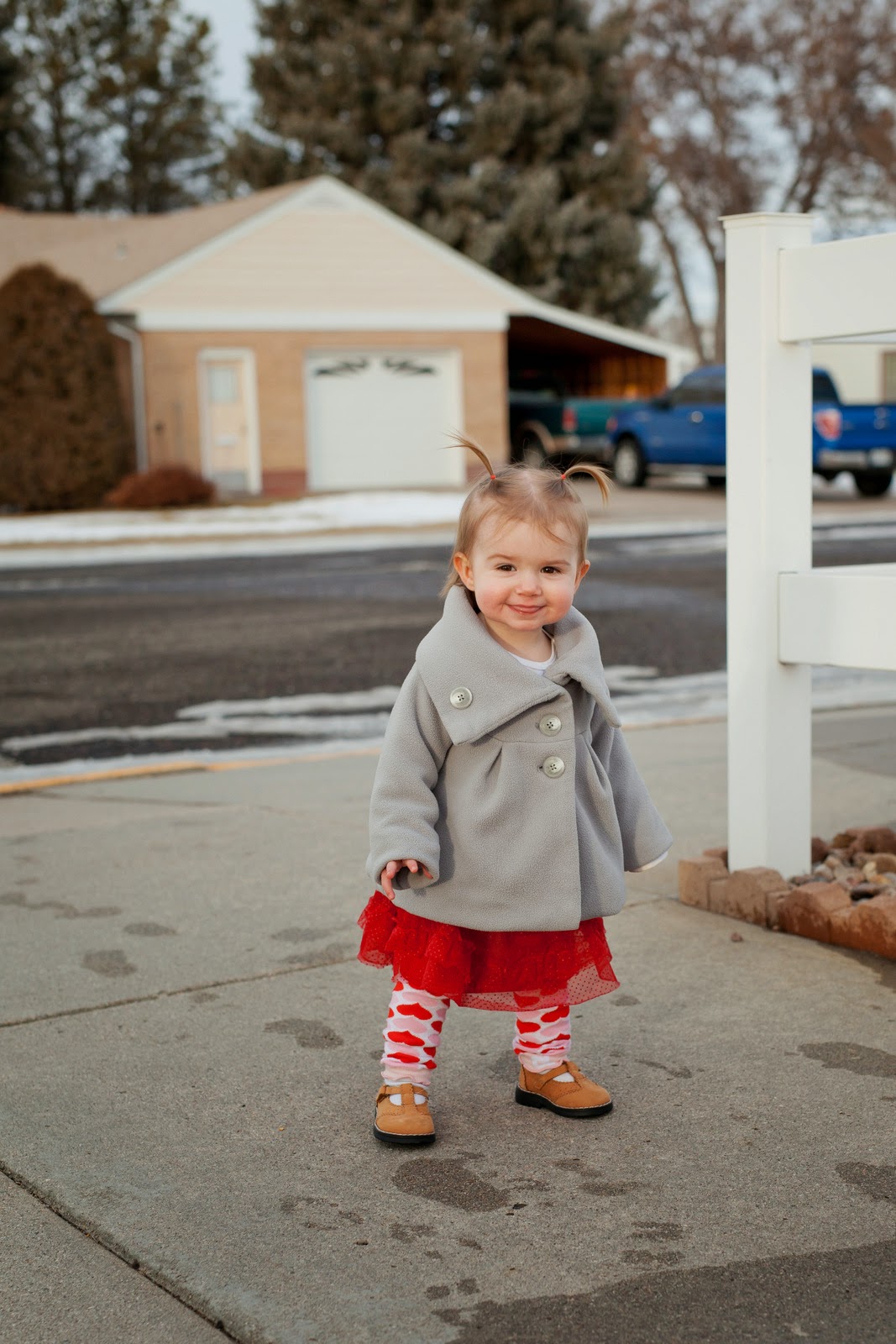 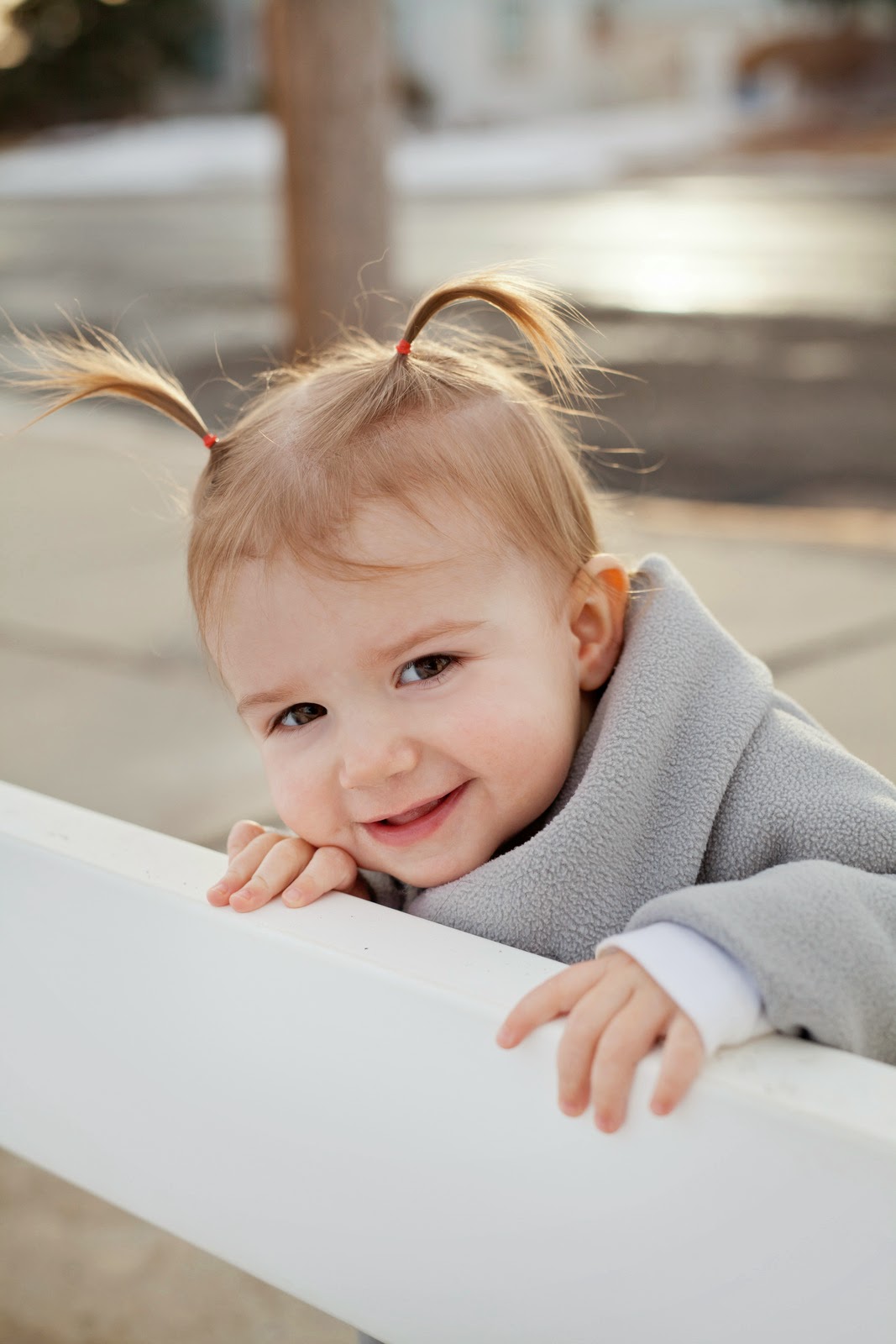 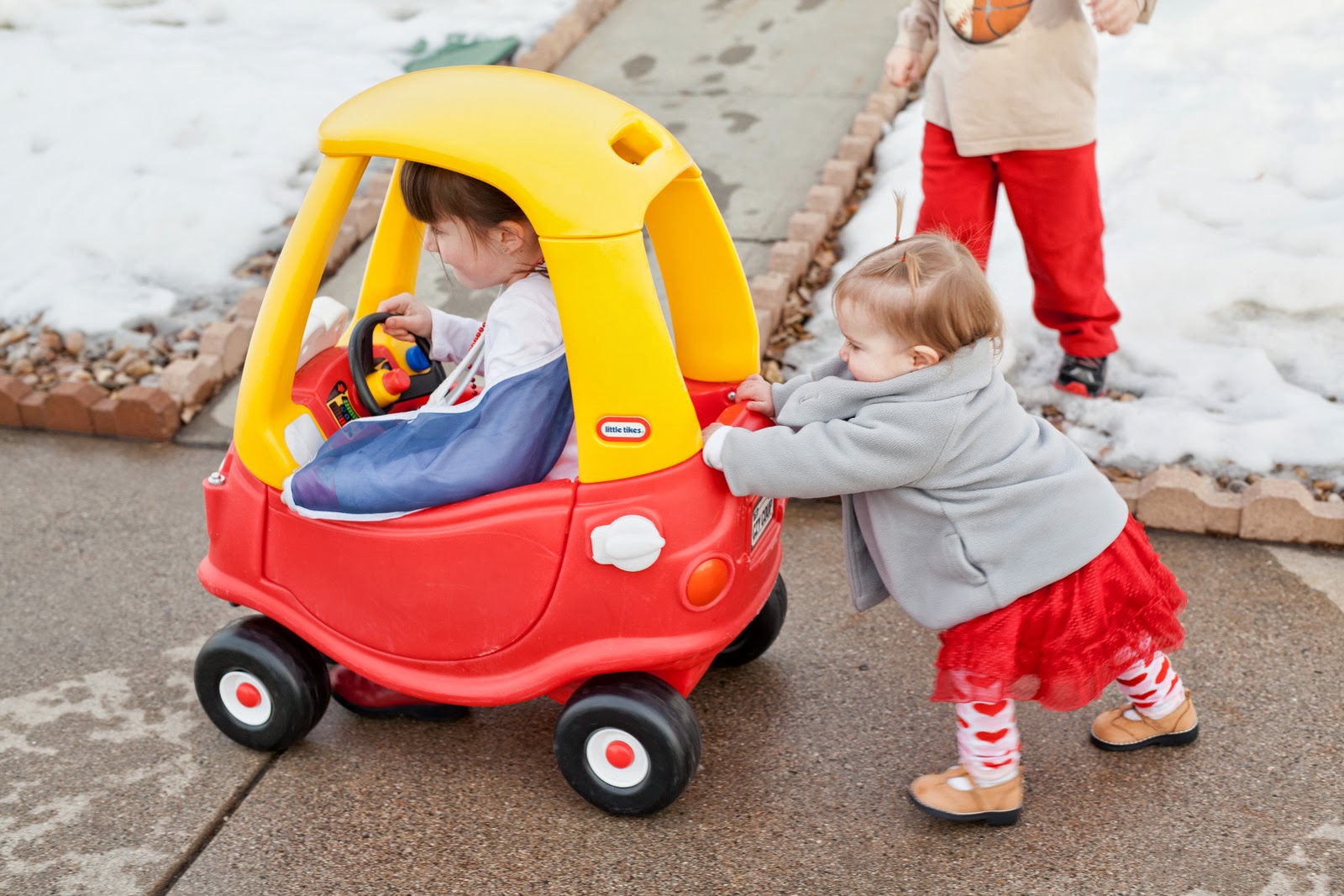 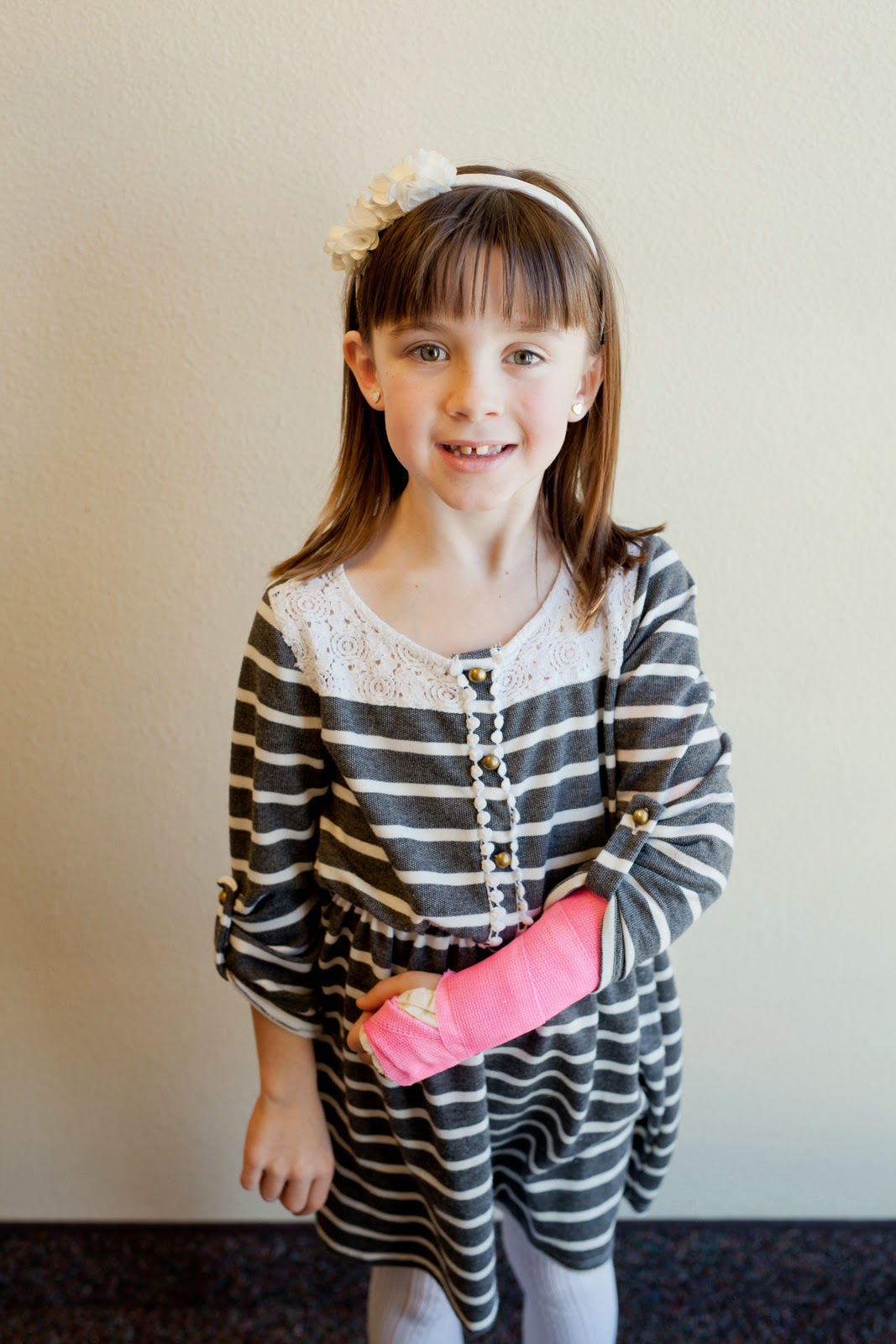 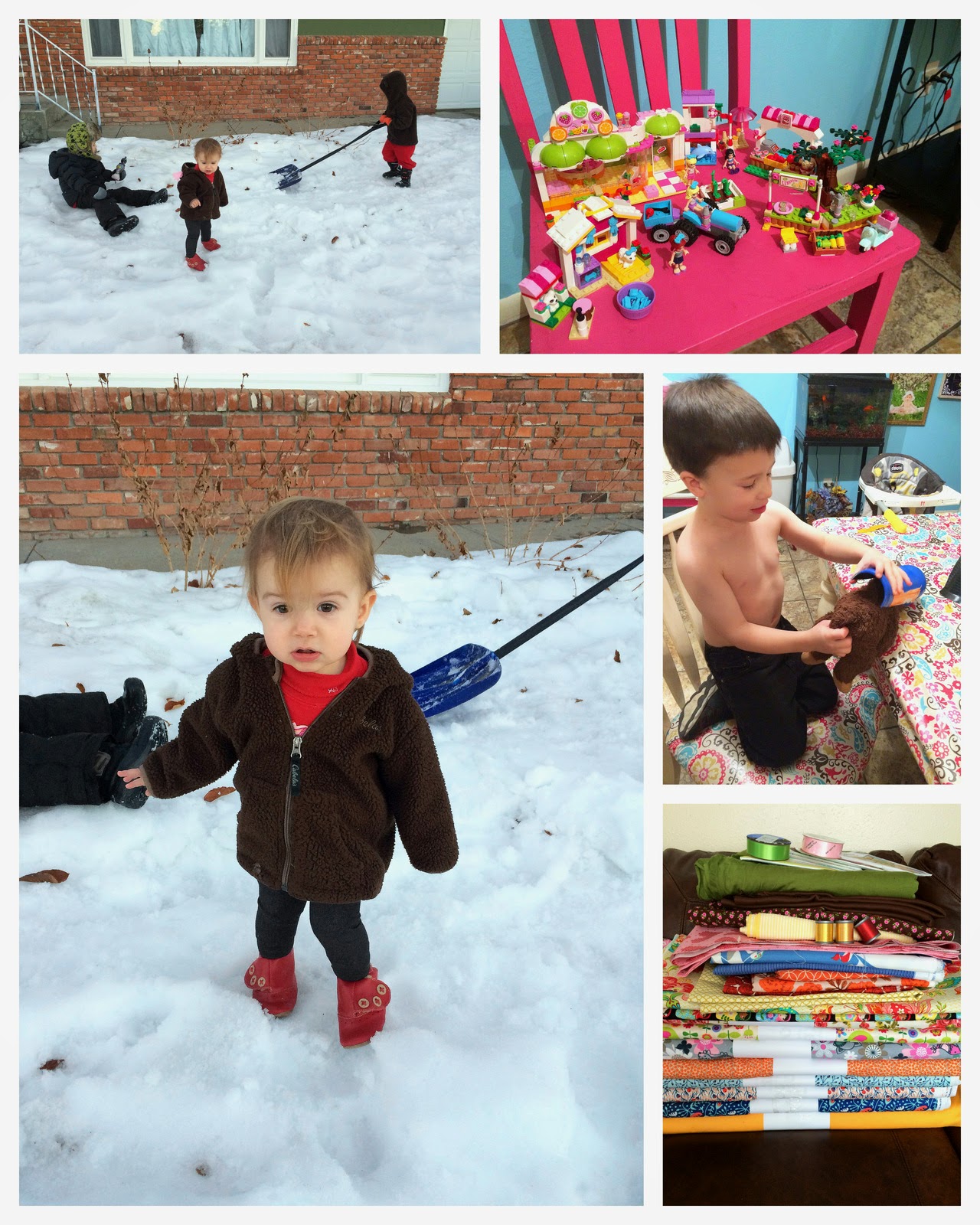 Last Saturday, when I checked on our mail, I found a library book checked out to me in the mail slot. I love living in a small town. The librarian heard about all our troubles and dropped off the book I had on hold on her way home. What? Awesome! Course it helps the librarian in question is Sister Jones.

Sidney's layer of ice and snow is finally starting to melt, we have the Call Pond collecting at the end of our driveway. The kids enjoy smashing the soft snow with their boots. I was so glad to let the animals out of the house each day this week. Evelyn gives a cute squeal of delight when I open up the screen door. She carries around her bear coat until I put it on her, she likes to wear her coat for some odd reason. Phillip made Cager a lightening-knight costume with an empty Pringles can. It makes Cager shoot lightening out of his bum.

Monday Phillip woke up at 5 am saying his tummy felt hot. He often says this when he does not know what he needs. A while later Evelyn woke up so I was snuggling her when I heard riotous commotions. Phillip was barfing his way down the hall and into the kitchen. He was miserable all day long. He was sick enough to take a nap! I warned the Missionaries about Phillip's malady but they decided it was safe enough. Phillip was all better around 5 pm. We had made from scratch Ramen Soup. The Elders taught Mia a discussion in preparation for her baptism. We are getting very excited as her special day draws closer.

Tuesday I took an impromptu trip to Scottsbluff to check out the close out sale at JoAnns and to get some paneling from Menards. I was impressed with the amount of nice fabric still available. The store is closing this week, a new Hobby Lobby is opening in a little while. The entire store's inventory was 75% off. I rarely buy more than 1 yard of fabric because of the cost. I found 7 entire bolts of 6+ yards, this means I might actually make some dresses! Yay! Some of the bolts were available to cut yardage from. The line to cut was insanely long, not because of the number of patrons but because of the amount each person had AND only two employees were on hand. I lost my place in line twice because the boys had to use the potty...across the street. We were in the store about 90 minutes. My boys were being very good, a little loud but not tearing things apart. They each had a zipper gun and were playing Star Wars. I got many dirty looks! I am continually saddened at the low tolerance for kids these days. I guess it was worth it since I saved $600. The boys wanted to play at the McD play place for lunch. We made 5 trips to use the bathroom. First the boys peed, than Everett pooped in his pants, I threw away his undies.  He pooped another three times in his pants, then his shirt, then his socks. He was naked by the time we left. I wrapped Phillip's coat around his loins to give the little guy some privacy. Course I had to make an emergency stop at Kmart. I left the kids in the truck since one was buck naked. I was gone about 4 minutes. A lady gave me a smart berating about leaving my kids in the truck. I thanked her for her concern and sent her on her way. We quickly got the few items from Menards and raced home. I was about 90 minutes later than anticipated. Michelle picked up Mia from school and let her play with them.

The boys enjoyed another session of gymnastics. I moved them to the Wednesday class from 7:15-8:15 pm. I pick them up after mutual. The girls made goals for mutual and then we played Life while munching on puppy chow.

Thursday morning Amelia had another Dr appointment. We got to our appt on time at 8:30, then waited an hour in an exam room. I fell asleep with Mia on my lap! Yawn! When our turn came the Dr removed the splint and cast her arm in less than 5 minutes. We were blinking our eyes as we left the building. It was so fast! She does not need to wear her sling, although she wears it because her arm dangles at a strange angle. Mia now sports a fun pink cast for the next 4 weeks.

I found a Cozy Coupe on the For Sale page. The kids love it, especially the older three. Evelyn enjoys pushing it more than riding in it. Evelyn looks adorable sporting cute little pony tails lately. Friday I put in two ponies. She was the cutest little thing. After school I sent the kids outside to play with the car and enjoy the warmer temperatures. Evelyn went out dragging her baby doll and carrier. So much purpose and direction. She started making a silly sound this week, like ahhck-ahhck-ahhck.

I spent a couple days staining the new wood panels I got at Menards. I stained them a deep brown, almost black. Planning to use them in my studio for some new flavor. Saturday afternoon I also decided to paint a basement wall with chalkboard paint. It is the wall that front the storage room. The boys ripped off the texture in several places over 6 months ago. I wanted to do something with it but nothing felt quite right. We are all very excited to make it into a fun art center. Each kid got a chance to help roll on paint.

Phillip and Mia spent most of the week playing Lego's. I put all their Lego's on the kitchen table Monday evening. Since then they played a strange game of Legoland Friends and Batman/Robin/Spiderman. I succumbed to the draw of Lego's Saturday evening. I spent a couple hours putting together  Amelia's 5 Lego sets. MOstly, I was curious how many pieces were missing. Playing with Lego's is very cathartic and calming. We were surprised only 4 lego pieces were gone. Pretty good if you ask me! I would not let the kids play with the Lego's until the next morning. I guess something needed to stay completed for more than a couple minutes.

I am in the middle of a monstrous task to organize my archived photos. It is fun going back through the years! Justin and I got Phillip's stomach flu on Thursday. We mostly just felt yucky and nauseous with digestional tract complaints.

This morning was awful. Evelyn woke up at 11 and was restless until 3 am. We spent 4 hours on the basement couch cuddling. Justin spoke in Scottsbluff at 9 am. I rushed around trying to get everyone ready. Usually that is no problem. This week Phillip ripped off his clothes after I got him dressed and stuffed the clothes into his pants, which he put back on. Everett threw a massive tantrum. His panties were in a twist because I pushed the table bench in crooked. We got to the church a little late, just in time for the sacrament. Everett was still crying and wailing in the vestibule. I checked on him to find he had peed his pants during his man diva tantrum. I rushed home to clean him up. He was so sad about not going to nursery he threw another tantrum. Sometimes these little ones can try our patience!