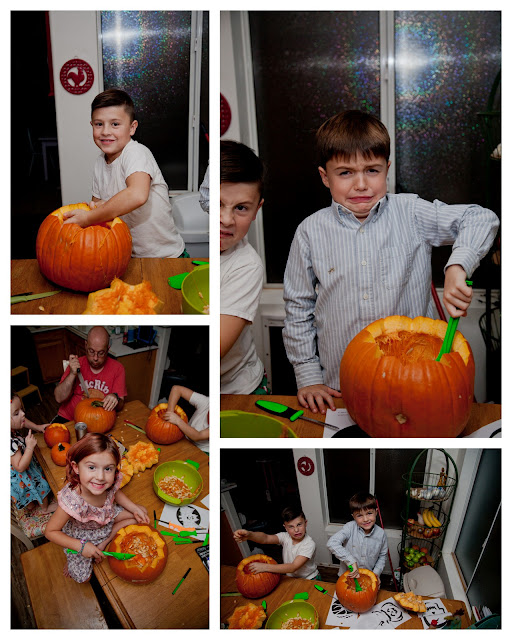 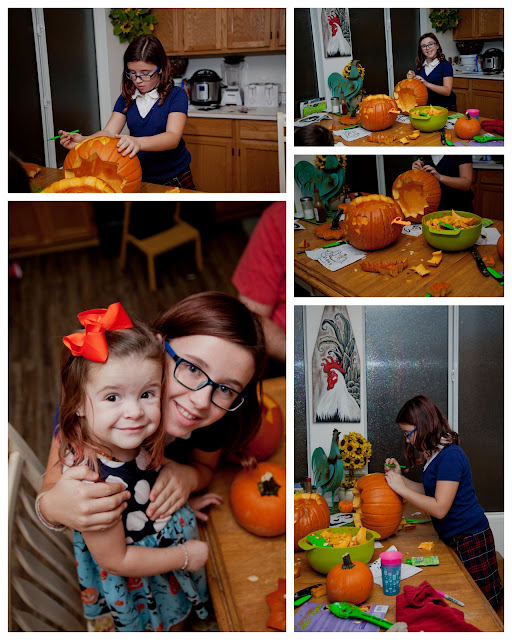 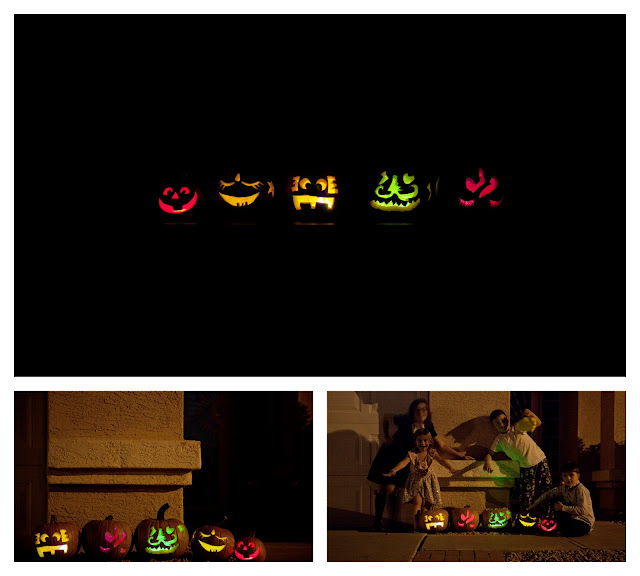 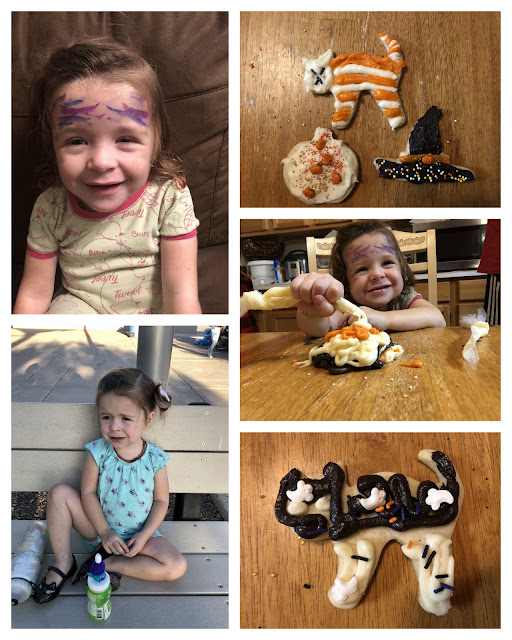 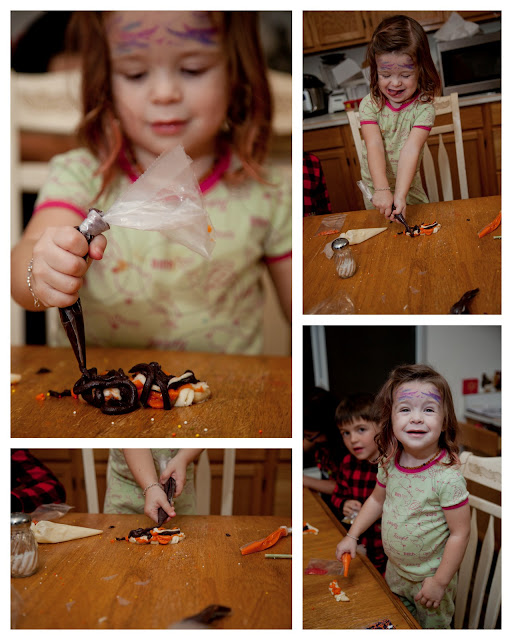 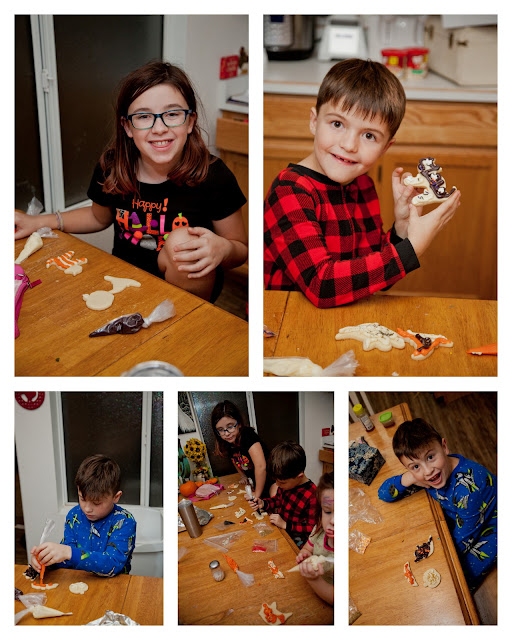 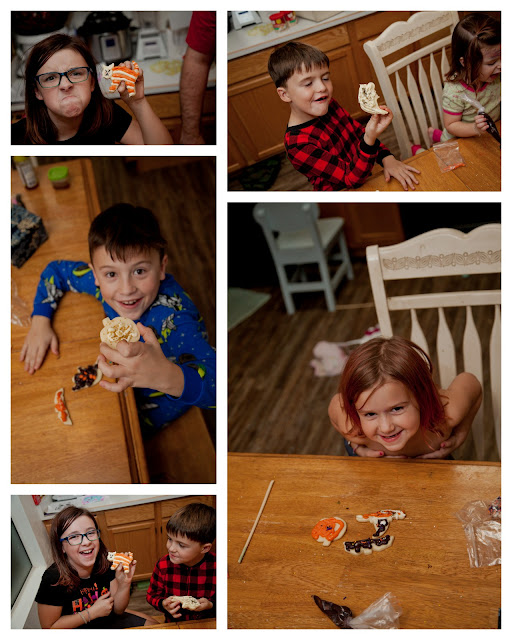 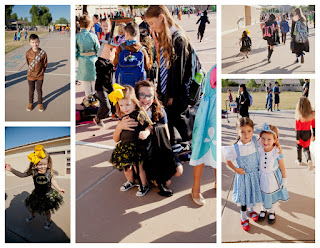 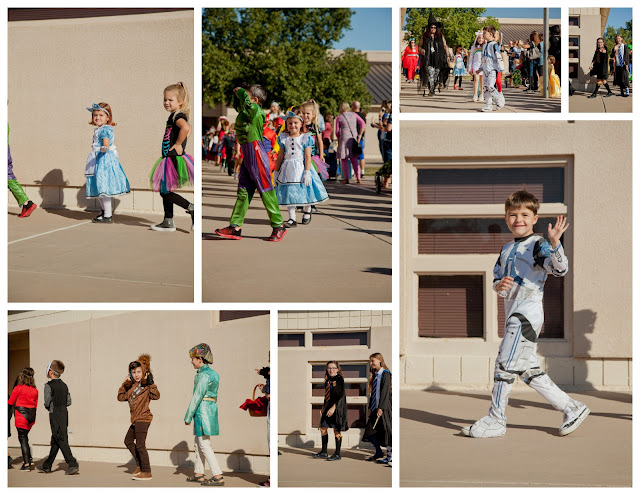 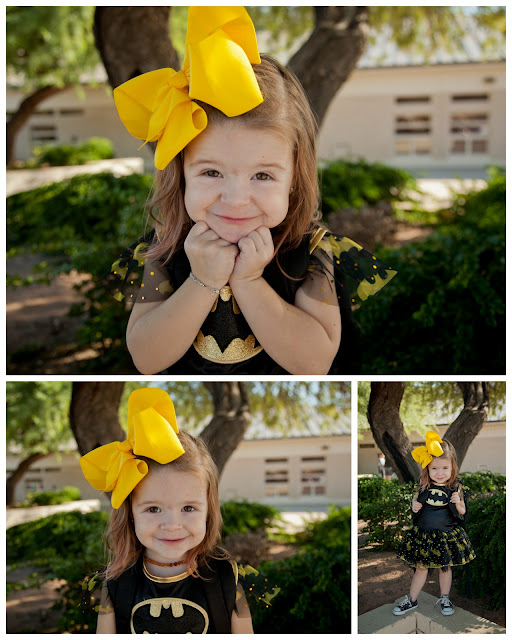 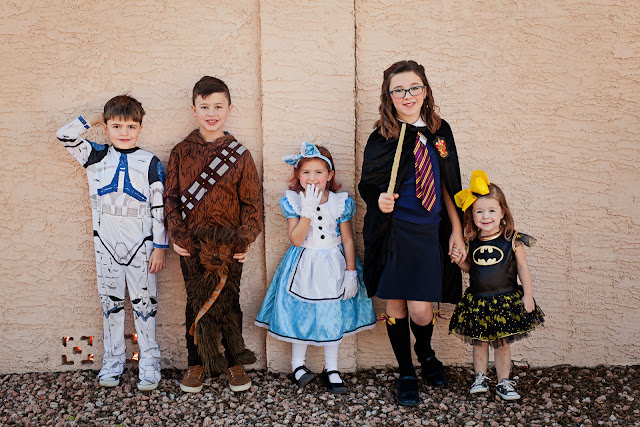 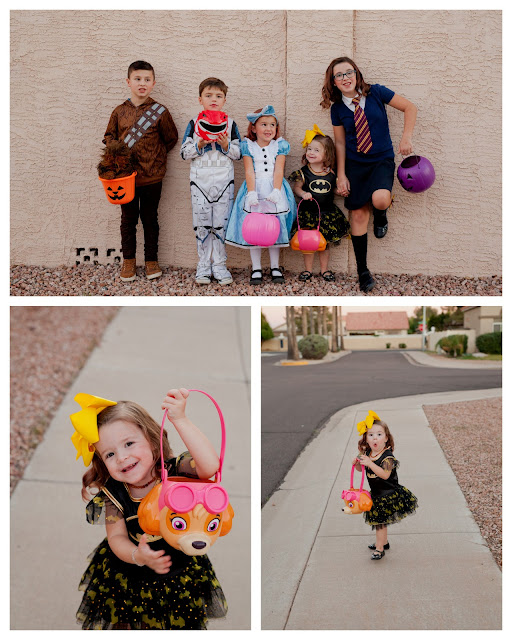 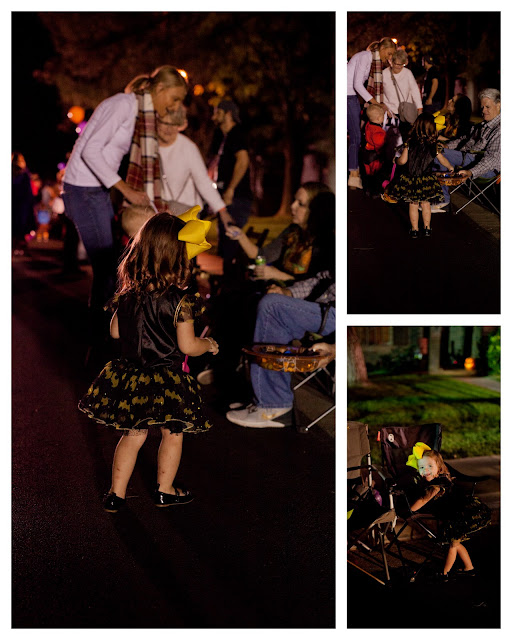 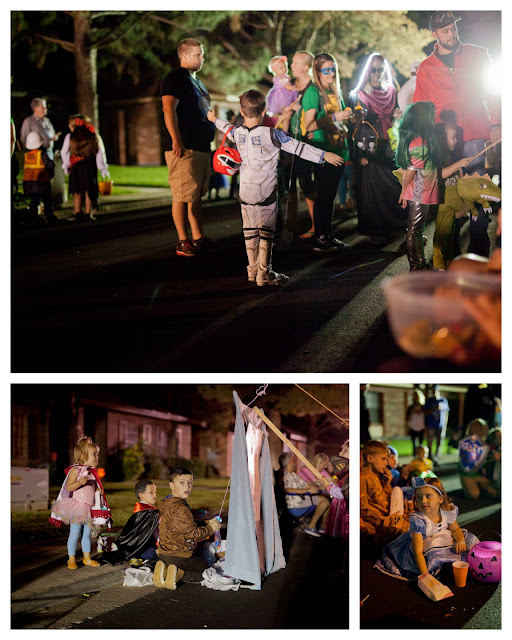 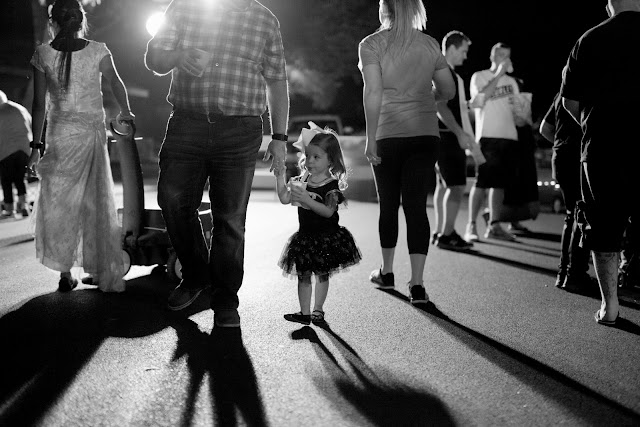 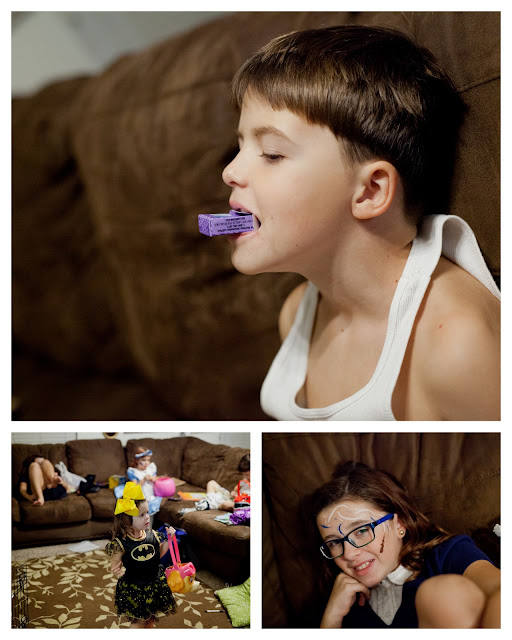 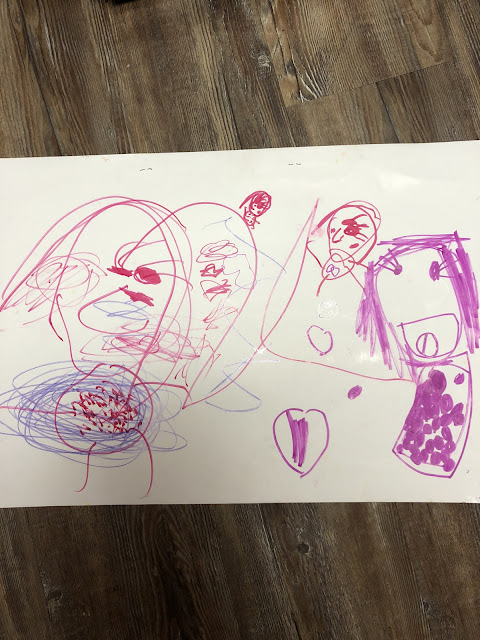 We welcomed Halloween week on Sunday with a pumpkin carving session. This year our tools were pretty awesome, I got the next level of cheap kits. Ha ha ha. The kids enjoyed designing their own faces with a marker. I quite enjoyed that this year the older kids emptied their own pumpkin guts, especially enjoyed their silly faces. Both boys jumped right in and tried to carve on their own, they did quite well with a bit of guidance. After the pumpkins were carved the kids used an entire package of light sticks to make their jack-o-lanterns glow. In the line up from right to left we have happy face Josie, unicorn smile Evelyn, "E" for Everett face, Silly mustache pumpkin, and sleepy unicorn Amelia. They kids carried their cute creations outside and spent a good while chasing each other around the yard.

For FHE on Monday we had a short lesson taught by yours truly. For activity Brooke delivered a box of freshly baked sugar cookies, tubes of frosting, and bags of sprinkles. Josie caught on quickly to the gist of decorating cookies! She piled about 2 inches of frosting on her one cookie with relish. Amelia showed off some seriously awesome designs! We dug into the cookies for our FHE treat as well. This round of FHE "glory" each kid earned loads of glory for earning amazing grades their first quarter. Amelia earned A's and one B! The other kids all earned in the top tiers number wise.

Tuesday morning I had my photo studio set up in the garage for several mini sessions. I snapped some photos of Baby Gabi and the kids in their Halloween costumes as well. It's no small feat to set up the studio stuff. I am quite swamped editing a million photos right now. I hated to add so many new ones with all the canyon photos still on my plate. Such is busy season for photographers. I also committed to photograph another wedding come December for our Stake President's oldest son.

Wednesday morning found us scrambling to get costumes on, hair curled, make up applied, and accessories located. I drove the kids to school so Josie and I could watch the Monster Mash parade. The kids all had the option to wear costumes to school then parade along showing off their costumes to those family and friends assembled along the parade route. Josie was so excited to wear her BATGIRL costume. We all got a kick singing, "do-do-do-do-do-do-do" Josie usually responded with a cute "batgurl." So much fun. After school the kids rested a bit then dove into their costumes for photos. Amelia and Phillip helped make pigs in a blanket for dinner while I worked on hair and makeup. We were all ready a few moments before six. Justin somehow made it home early enough to catch us in the driveway! I was not expecting him to get home until after 7, his new normal arrival time. Our ward hosted a block party, inviting anyone who wanted to join. We handed out candy while the older kids roamed the street and fun activities like fishing for prizes, face painting, movie, etc. I helped out with the face painting center after one of the ladies had to leave. Josie caught on to the candy craze faster than fast. She soon snatched candy whenever she could from an unattended bowl here and there. Amelia helped pass out candy so I could monitor Josie. Justin found Phillip manning the fishing activity without being asked. We headed home around 8 pm then walked around our block. I'd say half of our neighborhood houses were dark, the kids raced around to those with porch lights on. They scored big time since hardly any children were trick or treating on our street.

Friday Justin spent the day at home. He worked in the morning on work stuff. Josie and I did our grocery shopping for the week while he worked. We enjoyed a lunch date at Outback. We were both disappointed in our meals. UTI celebrates Veteran's day a week early thus the reason he had the day off. Justin caught up on yard work during the afternoon. Isla and Brooklyn came over for the afternoon and evening to play. Evelyn wants to know when Isla can move into our house. She loves having a new best friend. The girls stayed over until after 7 pm. Amelia and Brooklyn were invited to play outside with a bike gang of some friends from school. Not long after they left Amelia came home crying with Brooklyn in tow. Some of the boys were using foul language and prank calling pizza stores. The girls settled on making friendship bracelets instead. Evelyn and Isla amused themselves hiding plastic Easter eggs filled with Barbie accessories for a couple hours. Evelyn came home from school stoked to finally be chose as QUEEN BEE for the coming school week. She could not wait to decorate her poster. She filled it with 5-year old scribbles with Isla helping out. During her reign as Queen Bee she can bring a poster about herself with photos, share her favorite book, and bring a short show and tell. She got up the next morning at 6 am ready to keep working on her poster. All weekend she talked incessantly about queen bees.

Justin took the kids to Freestone park after lunch. He pumped up tires so they could ride their bikes! It is so lovely outside right now. I followed a couple hours later once Josie woke up. We passed each other as he was returning home with Evelyn (she had a potty accident) and I headed to the park for Josie to play. The older kids and Jacob were playing a game near the skate park. I checked on them several times as I moved from play area to play area. We enjoyed about 4 hours outside at the park!

I ordered a home sleep study test, still trying to get to the root of my fatigue issues. Sleeping all hooked up with a nose cannula, chest strap, and finger oxygen monitor did not bode well for a good night of rest. Add in that Josie woke up twice and Evelyn joined us in the bed bringing her hacking cough along. I am so tired of being tired. I stopped the keto diet since it was not helping and causing my joints to hurt (gout is a common side effect).  I am floundering. My left eye is also giving me grief. A few times a week it starts to burn intensely for no good reason, maybe I am allergic to my mascara. I hate to give that up since I don't wear much make up to being with.