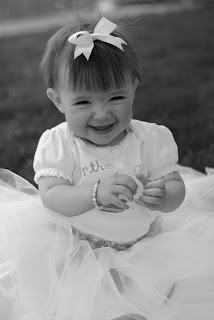 Amelia turned 1 year old!! I cant believe 12 months are gone already. Some days it feels like forever others a passing memory. We are so grateful to have Amelia as a daughter. She is so funny, smart, and precious. It is hard to believe two nerds in love made such an awesome human being. Heavenly Father has a funny sense of humor.

Justin had the week off so Amelia and I relaxed and enjoyed Justins slower pace of life. I am like a whirlwindJustin like a summer breeze. He managed to paint the front and back stairs (per HOA policy) and kept the couch from running away each afternoon. We walked to Dairy Queen for FHE. At least we worked for our dessert!
I arranged a fun Tuesday for us but he bummed out at the last minute and stayed home to nap and take a bike ride. I arranged for him to go shoot bunnies in the desert with Josh Johnson, it was out of character not to want to go bunny blasting. Instead Amelia and I met Sarah (Joshs wife and my good friend) and Bridger for a fun afternoon at the Tulip Festival. Bridger is a lively 2 year old boy. He had a great time chasing the birds, smelling the flowers, and splashing in the water. The tulips were not in top form this year. Only about 40% of the flowers were actually blooming. The colder weather and strong winds did not bode well for the tulips this year. Still it was refreshing to be outside in the warm sunshine and good company. Amelia and Bridger really liked the Secret Garden fountain. They were completely soaked after a few minutes. We enjoyed a yummy luncheon at Thanksgiving Point.
I felt compelled to get some cuter shirts on Wednesday. Lately, Ive experienced the frumpies and wanted to be as cute as Amelia for the summer. Ross had a good stash of decent shirts and some athletic shoes. Once the weather warms up I will look a bit cuter in my new shirts than in my worn out winter wear. I also had two photo shoots on Wednesday. I photographed an entire preschool of 7 active 3 year olds in the morning. In the evening I photographed a little girl for her 2nd birthday.
Miekka watched Amelia on Thursday while Justin and I went to the Jordan River Temple. She was good for an hour than cried for 2.5 hours until we picked her up. Little stinker pot. Miekka just ignored her whining and started making her birthday cake. Justin and I enjoyed a nice lunch at Rumbis before the session. I love attending the temple. This time seemed more relaxed since there was not a huge rush to get there and through the session and back before Amelia's next feeding.
Amelia's birthday was fun. I was very excited to dress her in her b-day onesie, tutu, tights, shoes, bracelet, hair bow, etc. She was VERY cute. We made a Costco trip with Seth and Jacob to allow Miekka time to finish her cake and get cleaned up after all her hard work. The kids snarfed down hotdogs and lemonade and smeared each other with cinnamon from their churros. Justin was thoroughly put out when the boys started licking each others tongues in the cart. For me, it was hard not to laugh; I put on my stern mommy face and told them to stop. Amelia must have caught a whiff of excitement because she decided an afternoon nap was out of the question. She was very cranky and crabby by the time we arrived at Mom's for her party. Justin grilled up the hot dogs and salmon/halibut (freshly frozen from Alaska). The rest of the party goers ate food and tried to appear excited. I think most were tired from a long week and ready for a big nap (probably just projecting my own feelings). We ripped open her presents and the kids fought over the toys. Amelia cried a lot and acted like a true birthday girl. The cake was the crowning glory. Miekka out-did herself with the cake. She fashioned it after the invitation graphic of a pink monkey. We gave Amelia a whole monkey ear to demolish. She just poked the cake and daintily put a few pieces into her mouth. I wanted to chocolate fountain of birthday cake gooiness. It was tempting to help her out. We ended her day with cuddles and kisses.
Saturday we slept in a bit, did the lazy dog (lay in the sunshine, kick our hind legs, while snoring with contentment), and went on a bike ride. This was my first outdoor ride of the season. Amelia rode in her bike trailer behind me. It was windy so the drag between me and the trailer was stupendous. Usually my heart rate is about 130-140, with Amelia behind me it was 160. For the first time I was struggling to keep up with Justinthat made him smirk with glee. We drove over to my Moms house for a reception around 4 pm. My Uncle Duane and his wife Rebecca were sealed earlier in the day. My mom's family gathered to celebrate.
Sunday, I was called to be the Wolf or Bear den leader for my ward. Can I just say that for once I feel totally and utterly intimidated by a calling? Talk about moving out of my comfort zone. Amelia and I went on a long walk Sunday to enjoy the perfect weather. Her peals of laughter brought out the folks around our little park when we rode the swings. Moments like that are gold.
Justin left this morning until Thursday for his new audit assignment in Berkeley, CA. We miss him already. Amelia had her 12-month check up today. She weighs in at 17.7 lbs, 27.5 inches (the 4th percentile). She showed her pediatrician her belly button, waved, and even nearly fainted when the nurse immunized her. It was a taxing experience for the little soul. Miekka invited us over for dinner. James turned 32 today! Mom and the boys showed up later on with a cake and gifts. The cake blazed with 32 candles!!! James managed to blow out all the candles with one big breath.