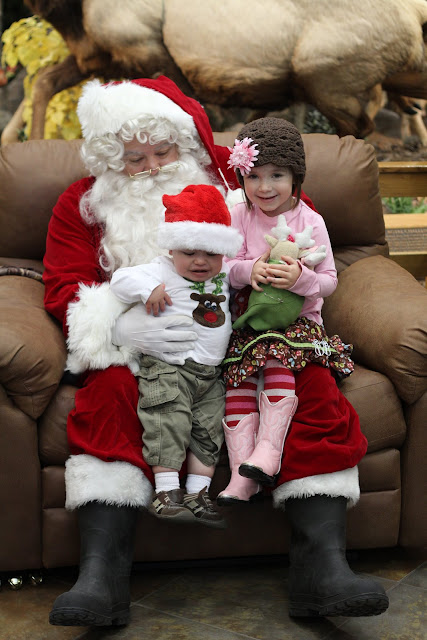 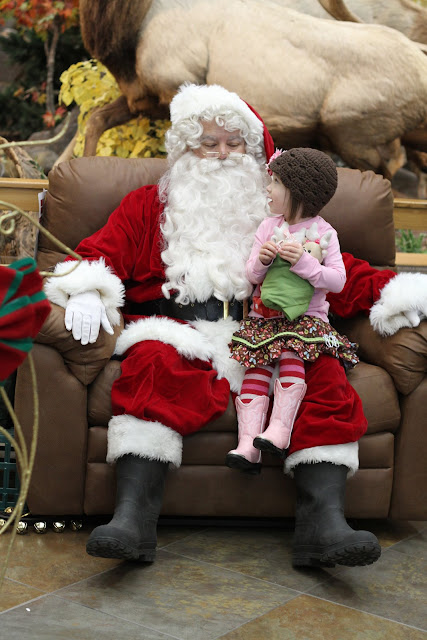 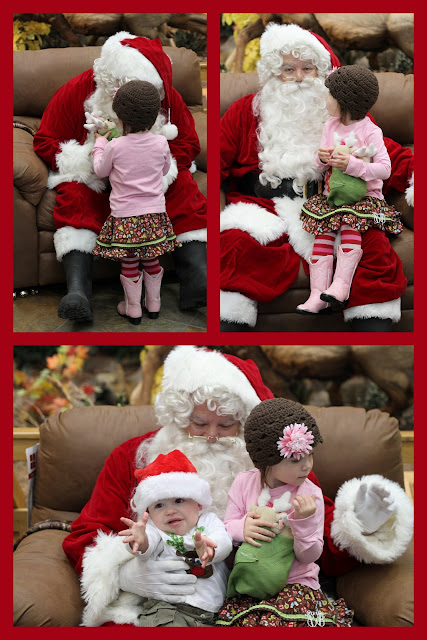 Justin was gone hunting water fowl yesterday morning. I made the mistake of telling Amelia that Santa was at Cabela's around 10 am. Lately she only wants to do new things. She will only watch new movies, only go to new parks, new Walmarts, wear new clothes, eat new food, etc. In the end she always picks something she's done before. I guess her little world is expanding and she realizes the possibilities of other places and things. So after telling her that Santa was at Cabela's her first response was, "not that Santa...again! We need to see a new Santa, not the same one." Then she decided that seeing Santa in Sidney was a little limited and thought that any ole Santa would do. From that moment until we left for the store she mapped and planned out her visit. We left around 2:30 once Justin got home. I spent a good hour trying to get my serger threaded with white thread. The tie on method has not worked for me yet so I usually end up rethreading the dang thing about 30 times until it works. Next time I am getting a self-threading machine. I made curtains for the inside of Amelia's play house and finished laundry while waiting for Justin. Amelia wanted to bring Apple and Bunny Gunny so Santa could meet them. Amelia ended up sitting on Santa's lap for a good five minutes. The ladies manning the photo desk wanted to take a photo for something else so we waited a little while. First, Amelia introduced her animals to Santa then sat on his lap talking his ear off. I heard part of her conversation:

Santa, I want a ball, purple, a purple ball that my brother Phillip won't like. I also want a pillow pet, the furry purple kind, with a sparkly horn called a unicorn. I want to unzip it and take it outside in my tent to watch the stars, the soft pillow unicorn under my head, then fall asleep. Maybe I can even have rest my leggies time with my unicorn pillow pet. What are you getting for Christmas, Santa? Candy canes are my favorite. This is my brother Phillip, he does not like you very much.
It was super cold and blustery yesterday. The city Jaycees hosted a Christmas party out at the fair grounds. First, there was a short (thank goodness) light parade. Phillip was quiet most of the time, his huge eyes the only telling part at how much he enjoyed the parade. We trekked to the fair grounds for chili, cinnamon rolls, and hot chocolate with about a quarter of our little community. The kids could decorate little ornaments, listen to Mrs Claus read a story, and sit on Santa's lap again. It was fun to do something a little extraordinary to bring in the Christmas spirit. 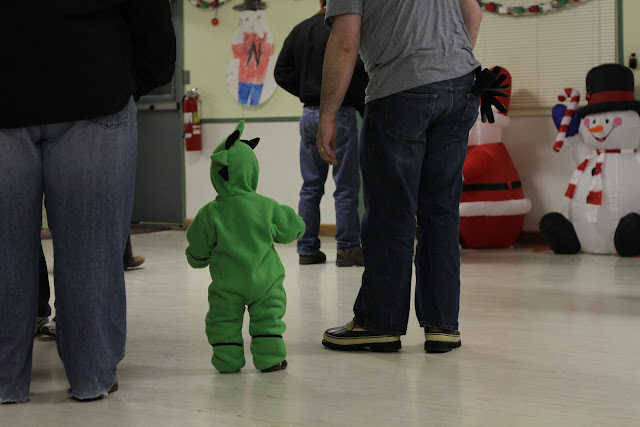 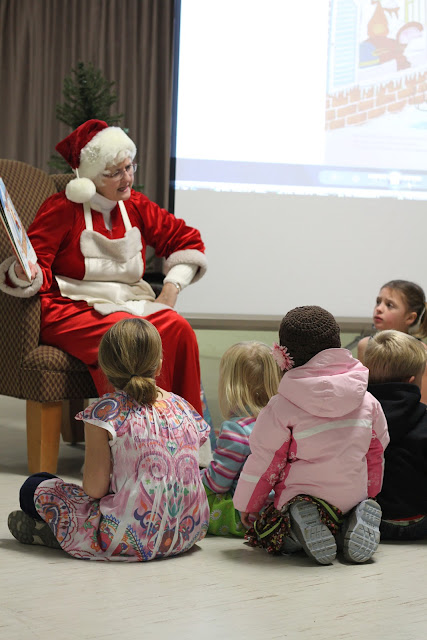 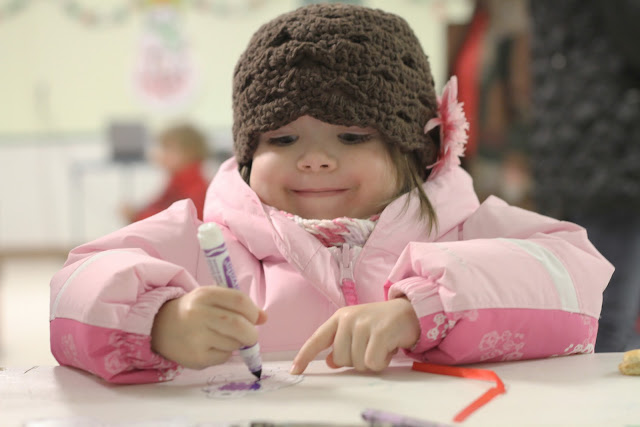 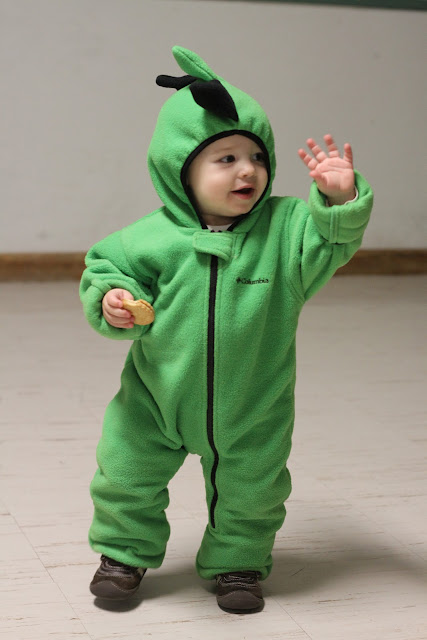 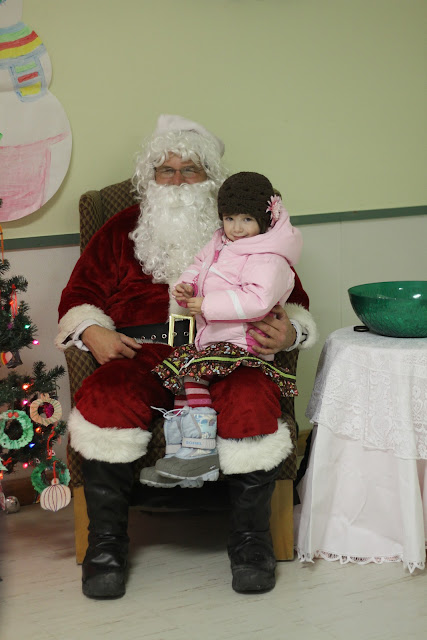 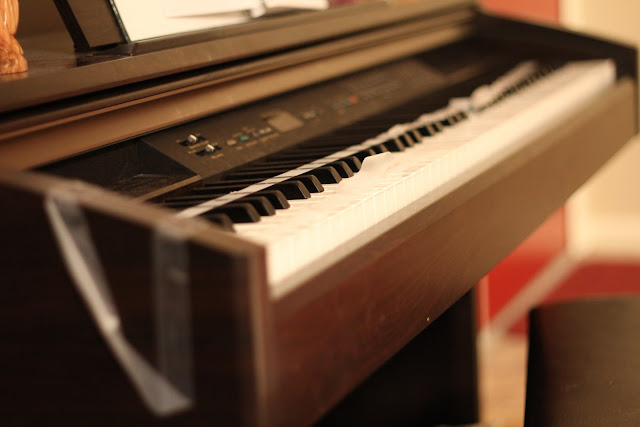 I am constantly finding shrines around the house. Yesterday Amelia took her clothes hamper, tipped it upside down and made a shrine on top. The shrine was a little basket, a photo of her, and a blanket covering her bottle of peppermint lotion. In the living room is a shrine to the snowman. All the snowmen are in one location smooched together so they cover a tiny baby snowman. On the couch is a candle lid, filled with water, covering a penny, sitting on top a napkin, this ensemble is all covered with a towel. Her newest shrine is shown above. She taped the piano to fix it. What you can't see is that in between some of the keys are tiny spangles from a Christmas decoration. I am sure at one time a nice towel or blanket covered the keys as well. Next time you are over see how many Amelia shrines you can locate!! LOL