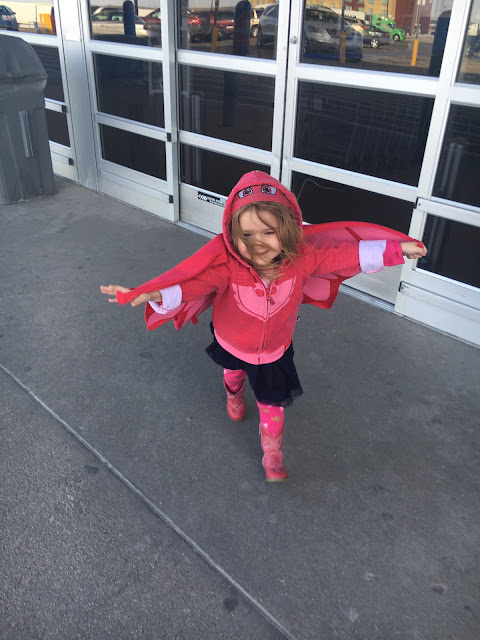 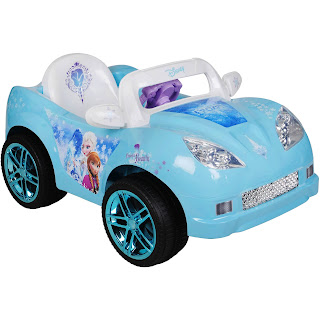 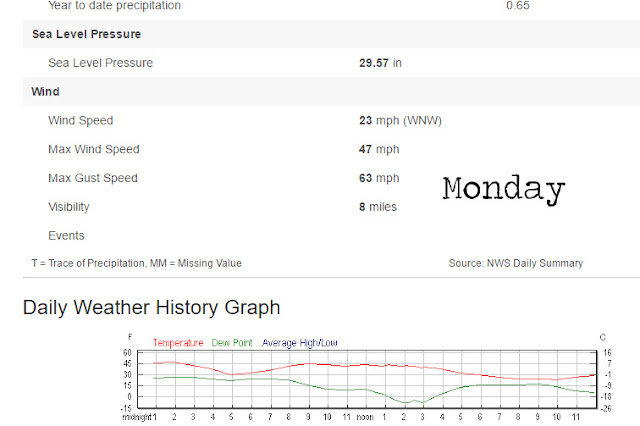 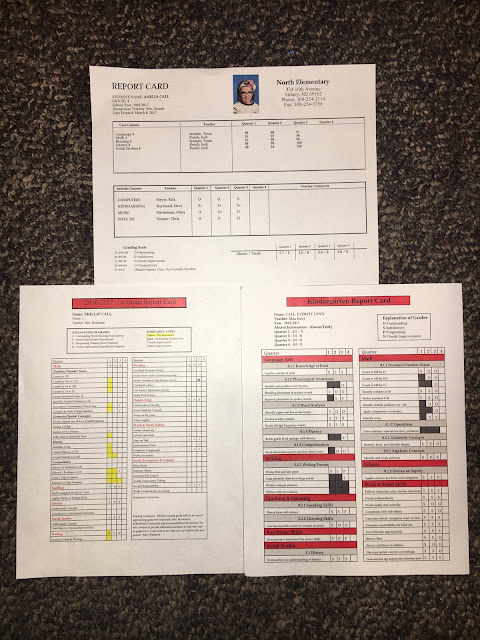 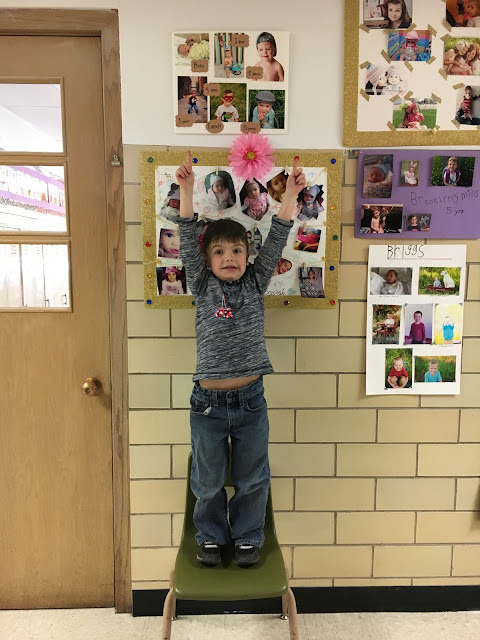 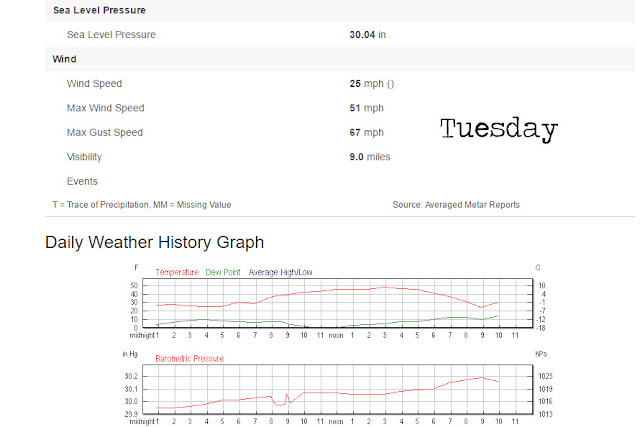 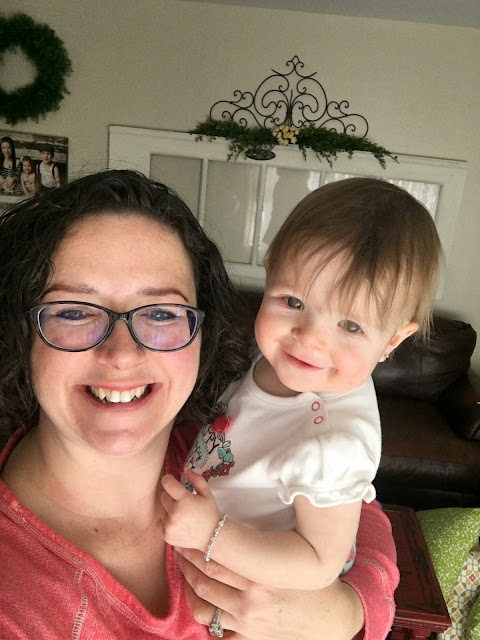 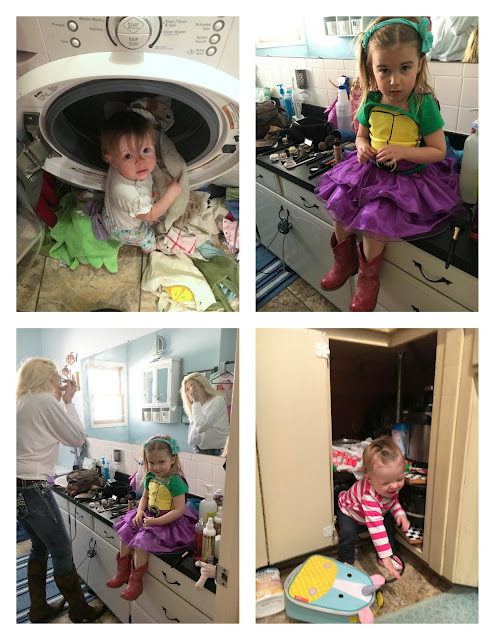 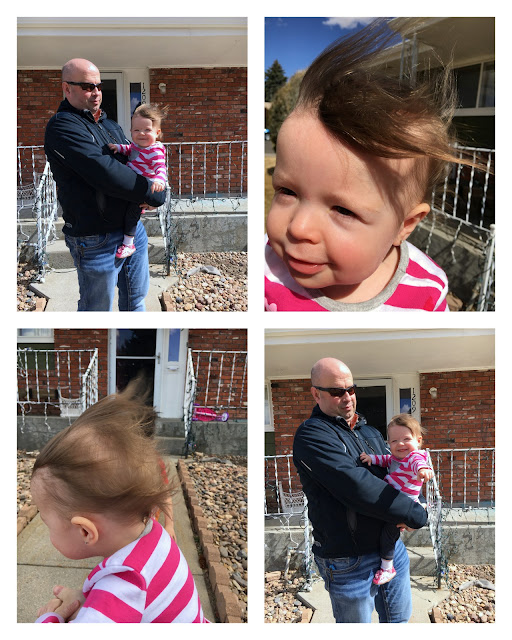 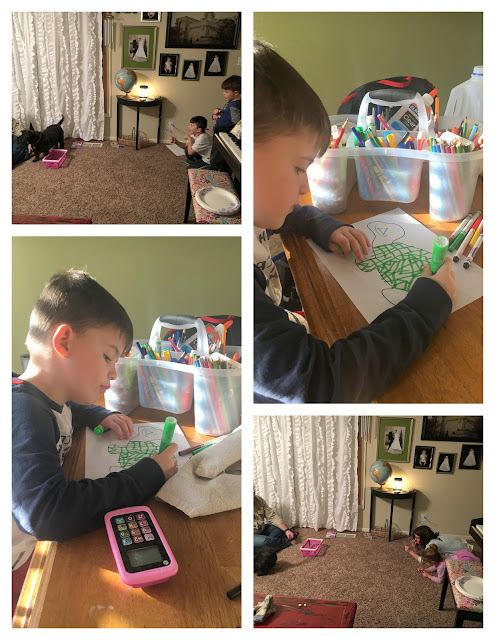 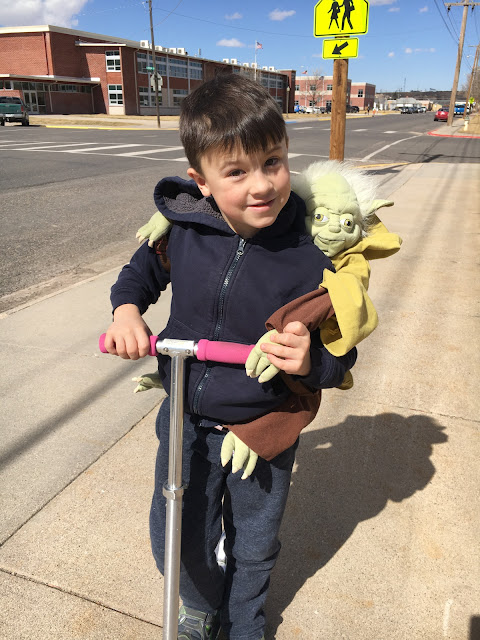 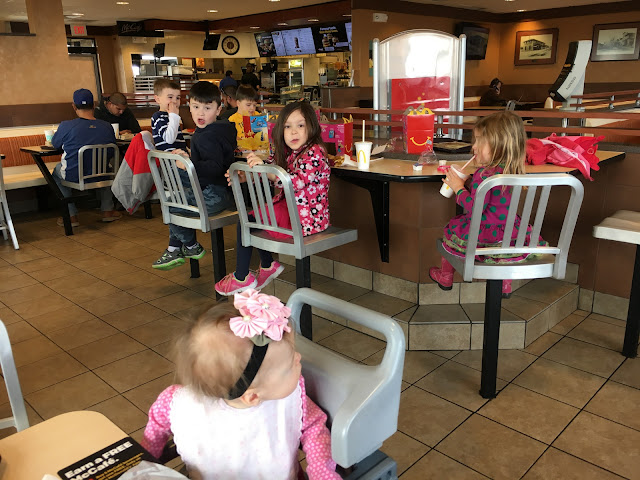 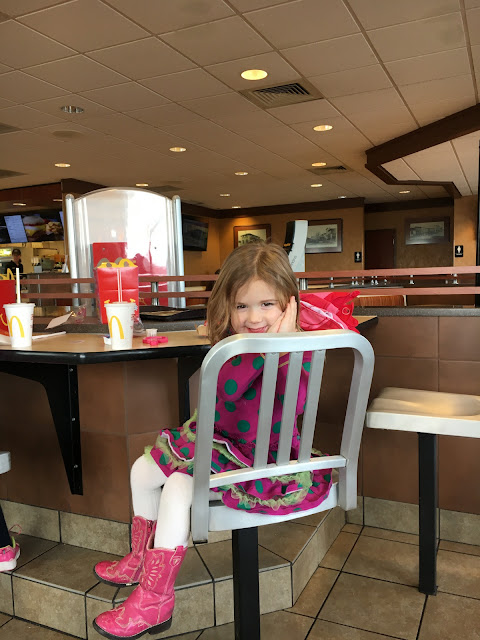 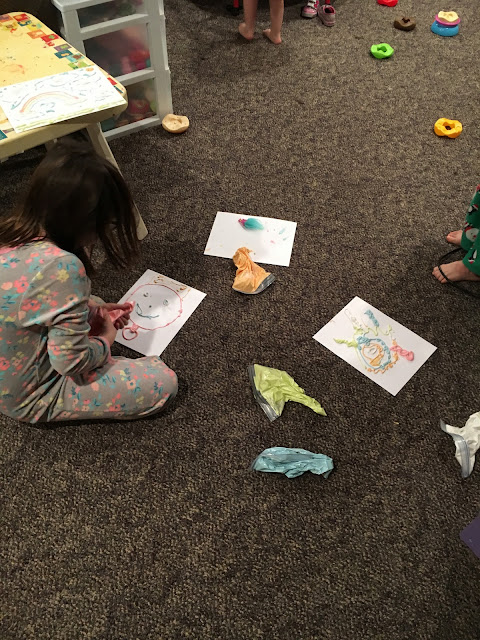 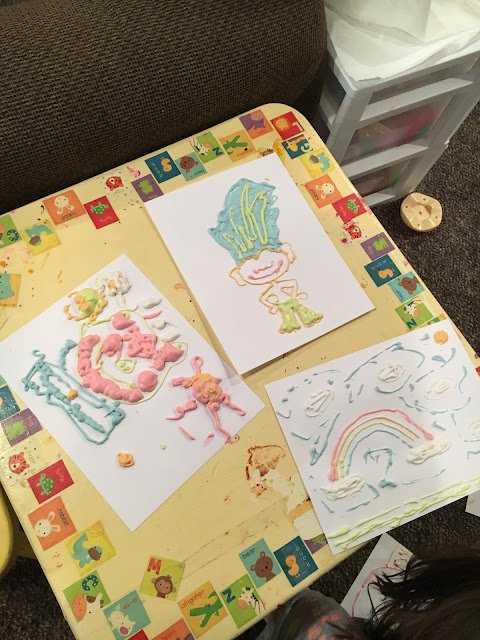 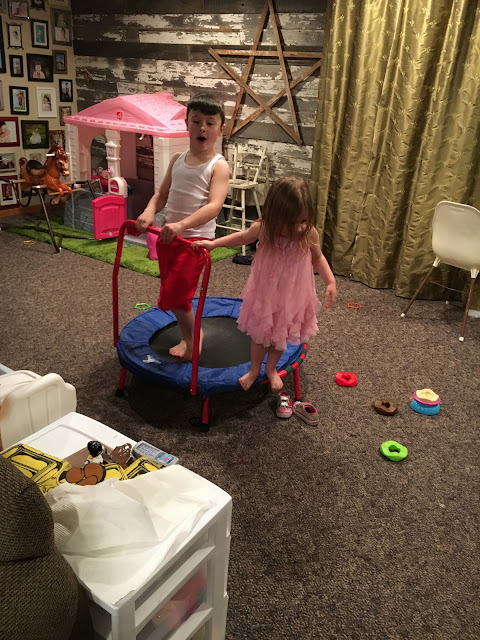 Nebraska is dotted with wind turbines. There is a good reason for this: Nebraska is WINDY. The wind usually comes when the pressure changes and the seasons. Holy smokes, it was windy on Monday. The steady wind speed was 23 mph, we beat the winds down the canyons in SLC, a steady 20 mph. Justin and I took the van to get new tires at 7:55 am Monday morning. Since I was out with the truck the little girls and I went shopping at Walmart. Evelyn wore her Owlet hoodie, she was thrilled the wings were really flying. She was thrilled until a wind gush at 63 mph swept her up a few inches off the ground. She was really flying. I got an eye full of dust, the truck was instantly filled with a light layer of dust, and grocery bags went flying. I came home and shook out my hair and clothes, even washed my face. The next day was even windier, with winds at 25 mph, gusts at 67 mph. The entire house rattled, quaked, and creaked. When the sunset and the wind dropped to a gentle sigh the silence was quite eerie. The wind continued to be quite strong all week, but not as strong as Monday and Tuesday.

Evelyn's most recent obsession is to own an Elsa car. She wants a $600 power wheel Elsa car to drive down the sidewalk when she and I walk to get Everett from school. She is quite obstinate about owning one. She insisted we walk past the toy section during our Walmart trip. There on the top racks of the bike section was a gleaming quad car. She squealed, hands on her cheeks, and joy oozing from her eyes. I killed that puppy. I refused to buy the "toy." She threw a full on tantrum right there on the aisle floor. I watched on for a moment then continued on my way, peeking around the corner to make sure no stranger stole my performing artist. She recovered. We got home, I printed out the object of her desire, colored it Elsa blue, cut it out, and gave it her. Amused at my own ingenuity. Now after printing, coloring, and cutting out 2-3 pictures each day for 10 days my amusement is quite diminished.

The kids had report card parent/teacher conferences this week. Monday was quite crazy with early out from school and two conferences. We rushed to met Everett's teacher at 4:15. He is doing amazingly well. The only critique is still his rushed scissoring skills and not caring to color nicely. Sounds like a boy problem to me. The important skills like reading and math are soaring. Right after Everett's conference we rushed home to take Amelia to piano. We rushed to attend Amelia's open house before ballet. She is doing so well, earning straight A's again, her lowest grade a 91 in Language for turning in assignments late. She hates keyboarding so earned an S+ in that class. I hated keyboarding as well, probably why I type like a Prairie Dog colony. Her teacher was dumbfounded that Amelia scored a lexile range of 987-1137, which places her in the 12th grade level. The issue we are discovering is finding books that suit her age and reading ability. Mostly she reads dog books and fairy tales. I love that her teacher tries hard to find her books that will amuse and challenge her. The kids were going bonkers while we waited our turn to see her English teacher, Mrs Janssen. She was in the gym so the kids kept running and whooping. They ended up in time out for disobeying me and making too much noise. After conferences Justin rushed Amelia to ballet. We ate a hurried dinner, decided it was too late for FHE. We postponed it for Tuesday this week.

Tuesday was Phillip's conference. He jumped from 151 NWEA score to 174 in reading! Way to go buddy! He is trying his best to read and making strides. He scored a bit lower in math because he struggles counting by 2's to 50. It seems the interventions introduced this past month are really helping: the chew toy, the velcro, gum, and the wiggle chairs, etc. He is on track to soaring out of 1st grade into 2nd! Good job crazy kid. I spoke with the vice-principle about pairing Phillip with Mrs Belieu for 2nd grade. Her enthusiasm and love of the kids will be a good match for him. Requesting teachers is not kosher here in Sidney since so many are related to the teachers. We enjoyed a nice FHE. Amelia taught our lesson. Phillip wanted to make catapults for his activity, he let me know 2 minutes before we started. He was upset over not making catapults, we finally settled on using plastic spoons to launch marshmallows into a basket. The activity was much harder than anticipated. Only Everett made a score!

The kids had a full day of school on Wednesday. I've amused myself sewing up over 30 little tiny newborn outfits using thrifted clothing for fabric. Two photographer friends bought the patterns for me, 9 patterns total (the patterns are $20 each). I will give them enough outfits to cover the cost of the patterns then sell the rest. Each outfit has a bonnet or headband as well. The hobby lobby is covered with thread, sweater fibers, and sewing debris. I even cleaned it up a couple days ago. Josie likes to help me unload all the drawers and cabinets while I sew. She is developing a sense of duty to reorganize things. In her room Josie loves to unload the bottom two drawers of her chest, she unloaded and loaded the washer 20 times while I ironed clothes, she helped herself to the lazy susan cabinet, found herself a convenient chair to sit on while she unloaded stuff. I love when her tiny tongue makes an appearance on the left side of her mouth. She was even throwing gang signs this week when Justin came home for lunch. I thrifted a fun Yoda backpack for Phillip this week, he immediately stuffed Chewbacca into the Yoda and went outside to show the teenagers getting off of school.

Thursday and Friday the kids were off from school again. Thursday the kids were all tired and insisted on a PJ day. So we stayed inside safe from the wind and just spent the day being lazy. We did clean the basement during Josie's second nap. Jen came over to use the hair dryer. Evelyn sat on the bathroom counter watching her like a hawk. Jen gave Evelyn a makeover as she put on her own makeup. Evelyn looked like a mini Jen, complete with dark lip liner.

Friday Amelia spent the day with Katelyn. Phillip had Cassandra over again and Everett invited Zach over for the day. The kids played all day long. We took a break for lunch at McDonald's. I wish the McDs had a playplace here. That would be so amazing. I fared quite well considering the ratio of 6 kids to 1 adult. A little while later my friend Sheena came over and added another 3 kids to the mix. We were all crazy tired after the fun day of playing. The basement reflected the amount of fun had by all. The little boys played Power Rangers all day, Evelyn made her usual mess with play food, barbies, and stuff, Phillip and Cassandra topped off the mess with playdough, dress ups, and Legos. Actually, I topped off the mess with a pile of patterns to cut out from newly thrifted shirts. We watched Moana as a family after dinner. The popcorn mixed right into the mess on the floor. I cleaned up while we watched the movie. Next afternoon it once again looked like I had not even cleaned up the big mess. Justin cracked down on the kids and had another clean up session.

Amelia had the stomach flu at 2 am Saturday morning. She messed up her bed with a large disgusting pile. I had her brush her teeth and spend the rest of the night on the couch. Evelyn and Josie came down with deep, rattling coughs and slug noses. Once again nights are like a circus show. I can't seem to get an hour's worth of sleep in a row. Poor little babes. The vicks trick on the feet really seems to help alleviate the coughs long enough for the girls to fall asleep. Seems like once the kid is really asleep the coughing naturally subsides. My pillow is a gross mess of snot on half of the pillow from Evelyn sleeping next to me.

Saturday afternoon Amelia was feeling a bit better. We made a batch of puffy paint to amuse the kids for a while. Amelia found a recipe using 3 cups of shaving cream, 1 cup of school glue, and 1 cup of flour. I divided the mixture, colored it, then transferred to plastic baggies. The kids painted with the glue using the tip of a bag cut off, like a frosting bag to pipe frosting on a cake. As the paint dried it puffed a bit more. Course, soon Phillip had his paper covered, his hands and feet covered with paint. Most fun activities end up with Phillip ruining it for the other kids. We had to put the paint away before the basement carpet was covered. Evelyn followed his lead and painted her dolls with blue puff paint.