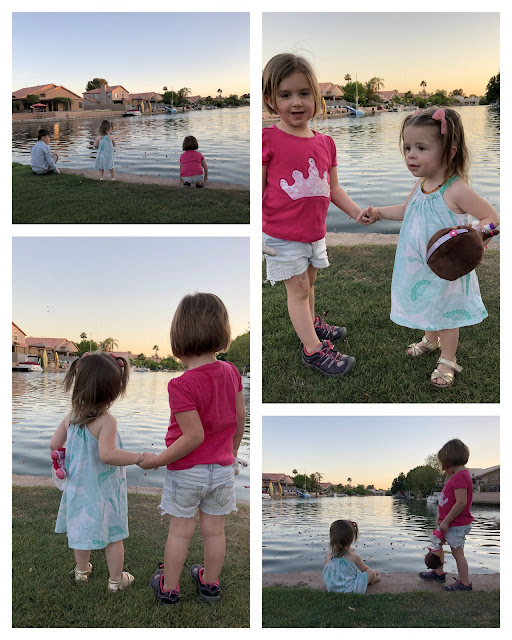 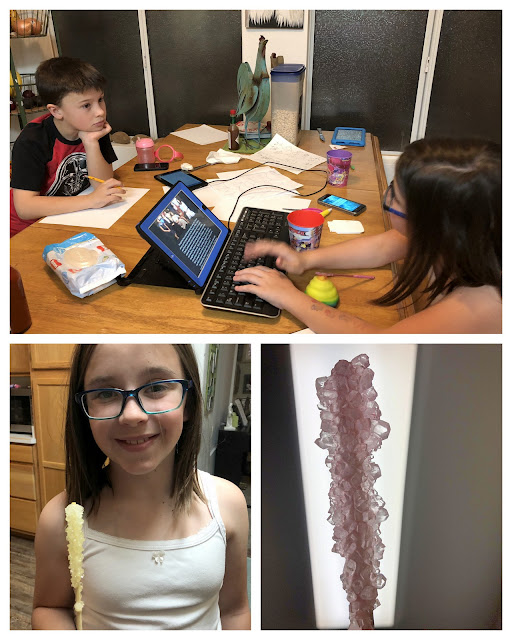 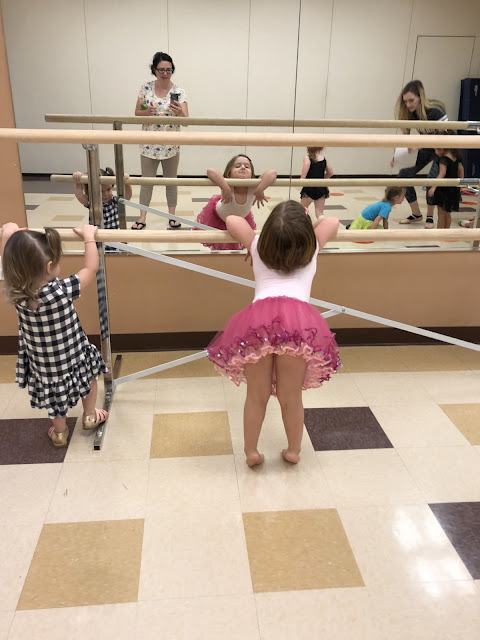 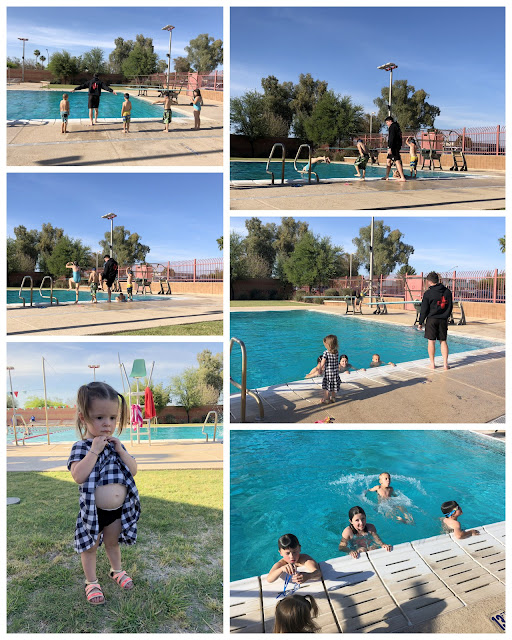 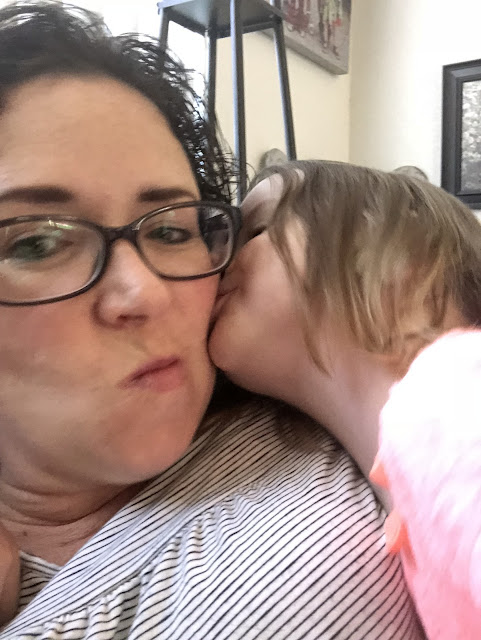 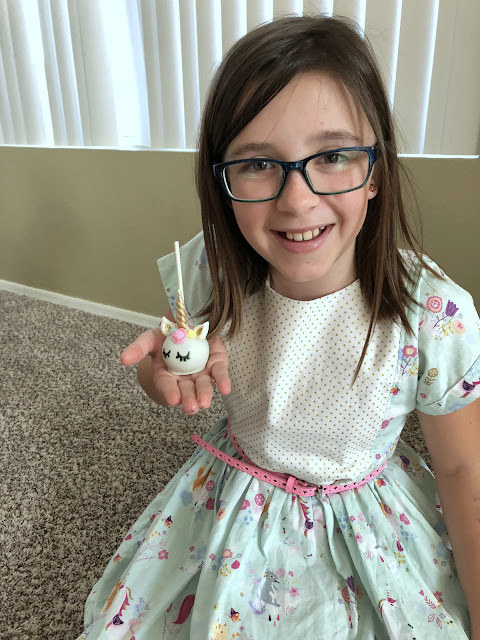 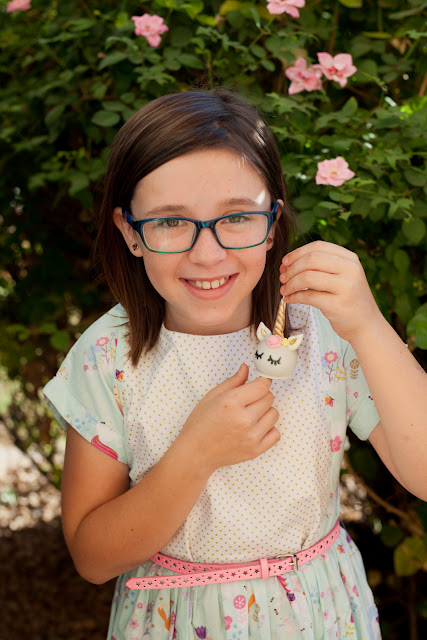 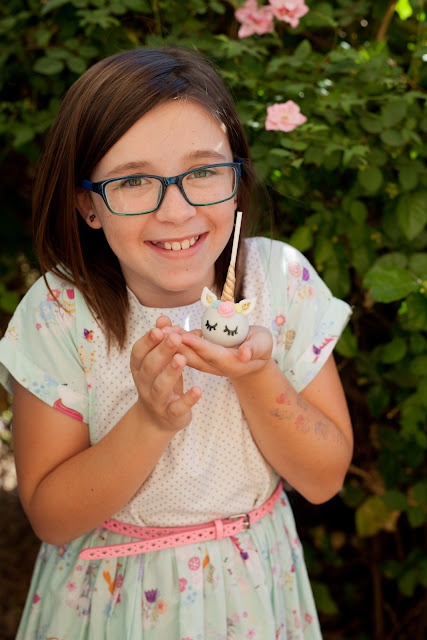 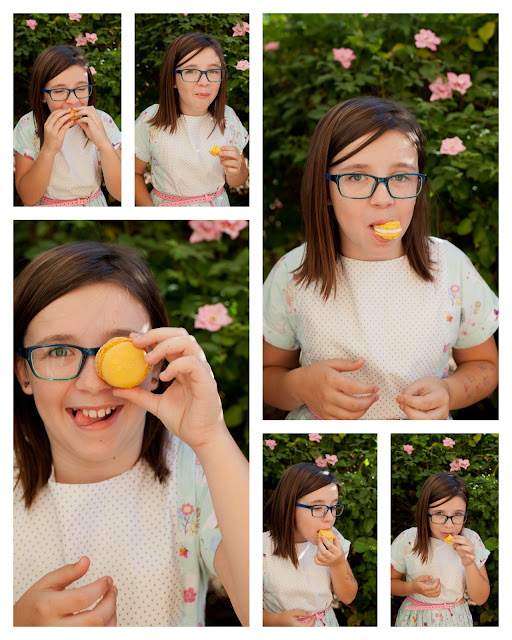 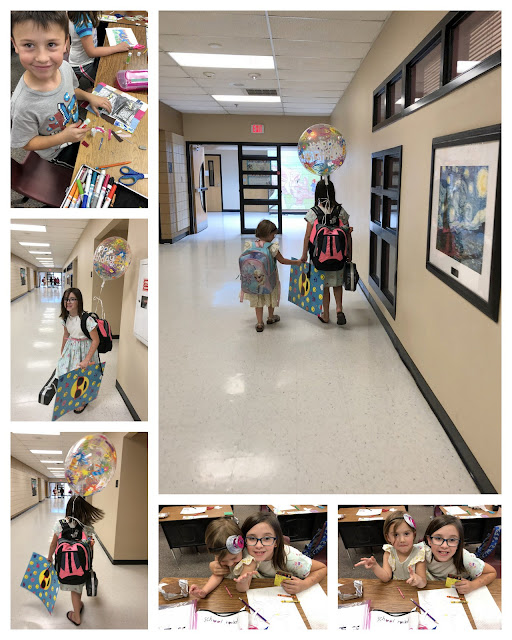 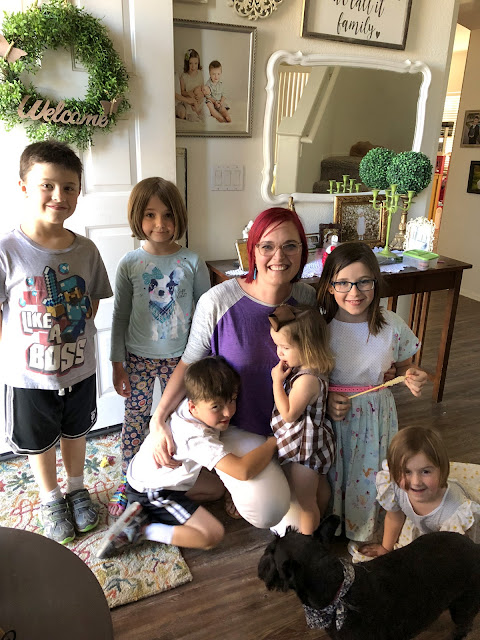 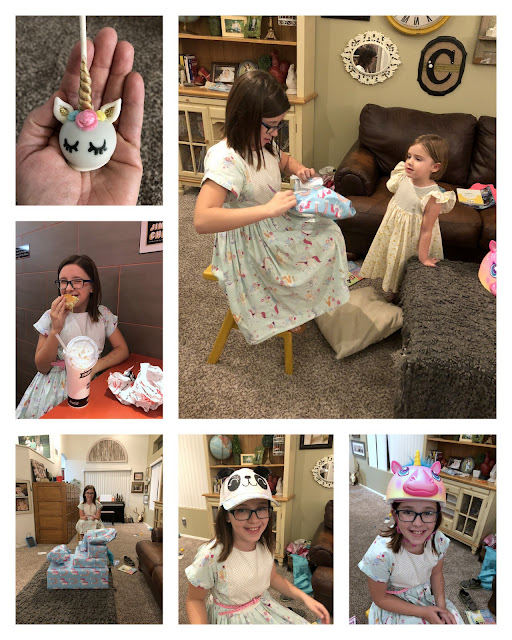 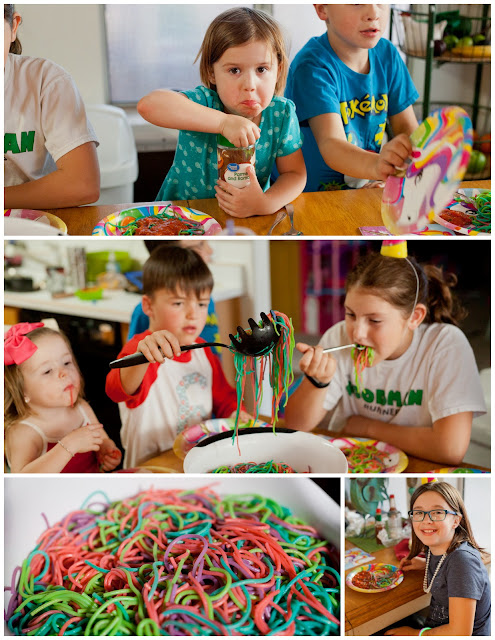 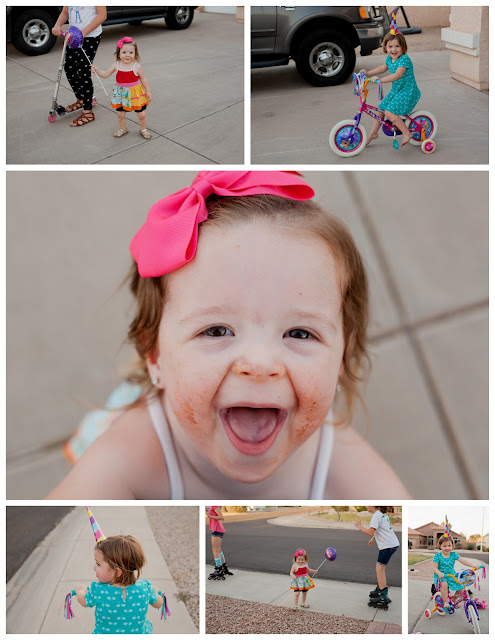 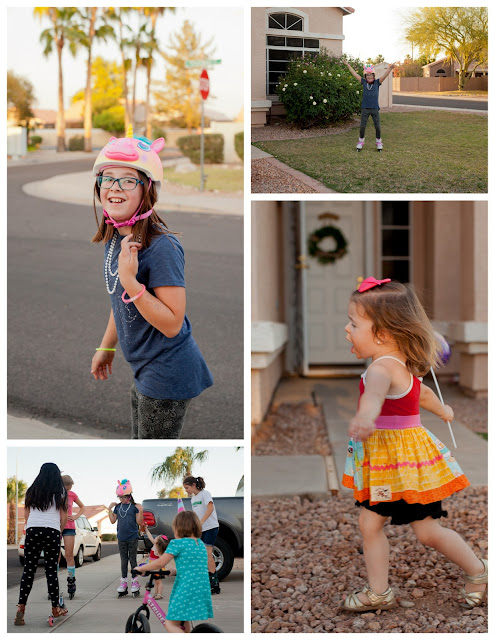 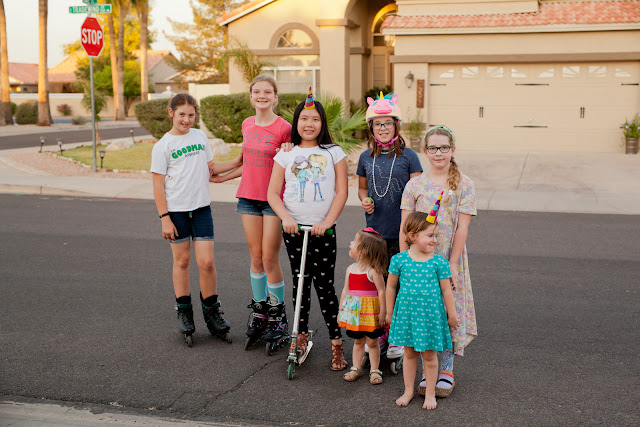 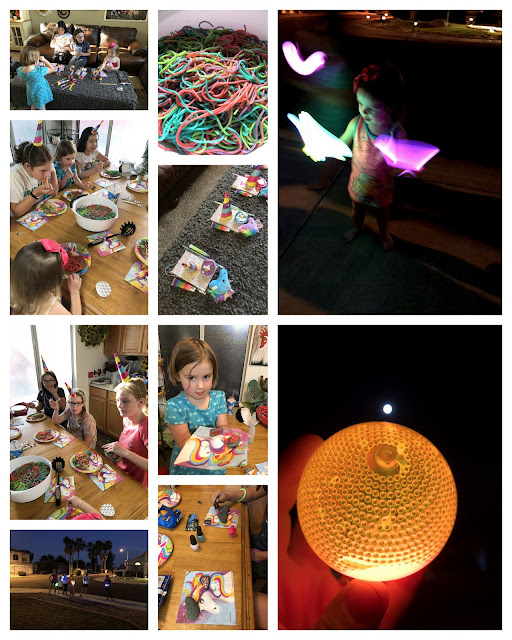 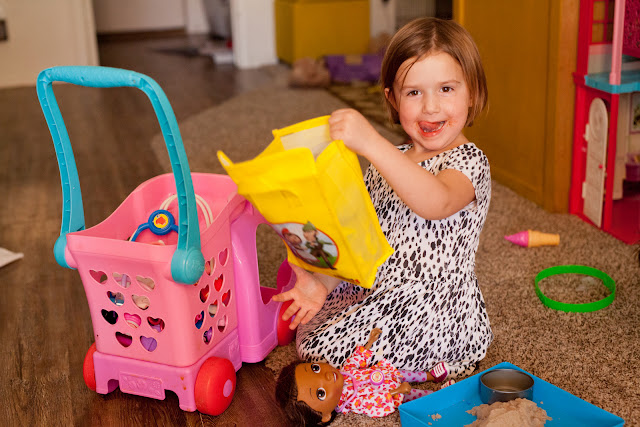 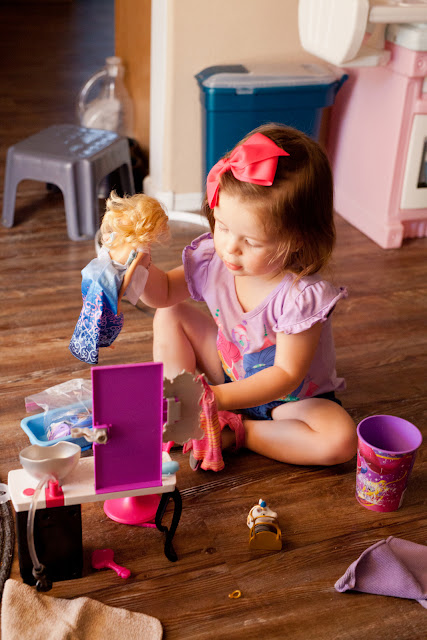 Sunday night the older kids were pretending to hold job interviews. Mia was using an old keyboard then interviewing the boys and Evelyn. Oh my heavens! The entire scenario was hilarious. The looks Phillip dropped during his interview were priceless. The kids finally revealed their rock candy we started the week before. Some of the candies were huge! We loved trying all the different flavors and colors.

Mia, Phillip, and Everett started diving lessons on Monday the 23rd of March. Josie was quite intent on ripping off her clothes and jumping right into the water. It was very intense keeping her corralled to the grass. Since the first lesson I have not been back to the pool area again, just dropped the kids off at the gate. The number of belly flops I saw that first lesson would impress most folks. Phillip's first step, step, step, jump, hop ended up with him chickening off. He jumped off the board sideways and landed on the concrete. I thought the teenager teaching was going to pass out! No more jumping back to the concrete from the board! The next lesson I sent the kids in with ear plugs since they all retained water in their ears. I got to take newborn photos of my third cousin's new baby, Kallie. I set up in my garage where it was nice and warm. We ended up taking the baby outside to a gorgeous Palo Verde tree across the street. The ground was covered with a blanket of the wonderful yellow flowers. The photos were completely magical!

Everett suffers from mysterious ailments all the time. His symptoms normally present around the time we are going to clean up, eat dinner, or start scripture reading. Last night he approached me complaining his belly ached. When he pulled up his shirt he revealed a very red stomach. The diagnosis? Too many belly flops. He scratched one of his toes over the weekend, nearly crippled the poor dude. It is hard to determine what really hurts and should be treated as serious. A couple weeks ago he stepped on a glass shard and cut the bottom of his foot. After just a visual inspection, while he was thrashing around on the floor, I noticed the shard was probably still in his foot. Imagine a strong, wirey, 6 year old thrashing about crying like I was about to amputate his foot. He did not even notice when I extracted the glass and finished. His antics continued for minutes afterwards. The same behavior exhibits when we trim his toe nails. Frustratingly hilarious.

Tuesday the girls and I spent the morning chasing down coffee shops and stores that carried French Macarons. At one store we found pistachio macarons AND the cutest unicorn cake pops ever. We picked up more flavors at a fine food grocery store. I want to go back to the Fine Foods store, it carried so many interesting ingredients! Amelia was keen on trying the french delicacy for her birthday. Mia met a new piano teacher after school. It was so, so hot outside in the van while we waited for her lesson. The boys were at cub scouts for a Nerf gun war. Temperatures were hovering near 100 that week.

The birthday girl woke up Wednesday an 11 year old. We are so proud she made it to her ripe old age! Wednesday was a really, really busy day. Mia dined on macarons for breakfast. She declared the treat amazingly delicious. Evelyn was so excited to hand over the unicorn pop, we made her close her eyes while getting it out. We sent her off to school with a loud rendition of Happy Birthday. I was able to teach two Art Masterpiece classes that day. The program is run and taught by parent volunteers. Josie spent a few hours with AJ Packard, her nursery leader while I was at school. Evelyn came with me since she had preschool for half the time. She was quite excited to pack a lunch and eat it at school. I taught Phillip's class first about Faith Ringgold and her "Quilting Bee." We learned about Faith, the kids loved that even though she was told her art was terrible while in college she continued and became quite famous. The kids created their own stories on paper then used fabric glued around the edges to reflect Faith's art style. I had to laugh that Phillip's story depicted our Nebraska house in a tornado storm. Evelyn mostly whined every few moments wanting to go to see Mrs Melichar. Mia and I left school right after Phillip's class and had a hurried lunch at McDonalds. Fancy, I know...but close. I taught Mia's class about MC Escher's piece Convex and Concave. Mostly we discussed his life, the process of lithographing, and his use of tessellations. The student's project was to create their own tessellation with a 2x2 card and repeat the pattern on paper. I was very surprised at how difficult this task was for the students. Only 3 students were able to follow directions and complete the exercise. Both classes were very well behaved and seemed to enjoy the change of pace! Amelia passed out ice cream treats to share with her class once our time was up. Evelyn found a balloon at Safeway we bought for Amelia to have in school. I took the girls home early after a fun visit to the book fair. Phillip took his wallet to school the day before and spent all his saved money on two books, a toy pointer, a toy calculator, and other strange items. Let me tell you, holding back my temper was a real test of patience. It IS his money, but seriously? He dropped $50 without permission. I dropped another wad of cash on new books for summer. After school Chloe came over for her piano lesson a day early. Amelia was glad to have her over. After piano we had diving lessons. Josie and I roasted in the van during the 30 minute lesson. We met Justin at Jimmy John's for birthday dinner. Mia ended her special day opening most of her gifts saving two for her "party."

All the public schools closed in Arizona from Thursday April 26- Thursday May 3 while the teachers walked out. The teachers are demonstrating to gain more educational money in the budget. From what I hear Gov Ducey signed the bill that originally started the strike, not changing a thing. It is sad to think that the students and teachers message was not heard by this money sucking governor. I think his governal race this November might just come to an end. His true colors shone through. Still, our schools and teachers will remain underpaid and undercut. I really feel sorry for all the parents and kids who were scrabbling last moment to find arrangements while parents were obligated to work. The kids enjoyed 7 unexpected days off, a pre-summer vacation! We had some fun times to mitigate the boredom.

Friday Chloe came over at 8 am, her parents were off to work all day and she wanted to attend Mia's late-night party. The girls planned and organized the entire party! I had very little to do with the party except making a cake and dinner. We did head to Dollar Tree for some favor gifts right before the party. Abby was able to come last moment, she was excited to surprise Amelia! At 5:30 cousin Anna and friends Abby, Chloe, and Averie started the party. We had rainbow spaghetti with sauce for dinner. The girls then skated around the front yard area for a bit blasting dance music. Evelyn and Josie were thrilled with all the excitement. They took a break inside to paint rocks with nail polish. The glow sticks, balls, and accessories came out next. The girls roped Phillip and Everett into a roaming game of hide and seek. That stopped when Phillip came nose to bumper with our neighbors car in the middle of the oval street. He was not watching and darted in front of the truck. That kid is lucky to be alive. He came in white as a sheet, refusing to talk about it. Everett spilled the beans once the game officially ended. The girls ate jello cake with fresh strawberry whipped cream. I snuck a slice of cake, sigh...it was delicious. Mia opened up the few gifts before Anna and Abby left. The girls watched Ladyug on Netflix until Averie and Chloe left. Pretty fun party if you ask me! Easy and fun.

Saturday Justin and I continued to prep the pool area and start setting it up. The pool looked level once we finished setting up sometime after dark. We moved lots of sand and rock again since the pool was 4 feet longer than the area we prepped before the purchase. I totally earned all my blisters. As the pool started to fill up the north side sunk down about 4-5 inches and even more on the north-west corner. The sides also bowed in so much it looked like the corner piece was about to come out of the sleeve. We stopped filling the pool once it was about 3/4 full. Took 4 days to drain the water via siphon. A neighbor came by to tell us how to set up the pool and use 2x6's to prop up the frame as it fills to keep it level. The instructions did not say anything about that! We had all the Hornbarger kids over from 10-4 pm while Ian and Evelyn went to the funeral home to prepare Brother Hornbarger's body, he passed away early Saturday morning. We were so glad to help! The boys and Mia were at a birthday party until 11. Hopefully, playing with friends helped distract the kids a bit. Kaylee and Phillip were joined at the hip, maybe we should arrange their marriage. Make love easy! Amelia, Julie, and Tess had the best time, there is something special about bonding with friends from a past chapter of our life. I had a senior photo session with Sister Taylor's daughter, Savannah. We headed to Nichol's park. It was so very crowded with prom goers taking photos before the dance, two cake smashes, and three family sessions. The park is not that large so space was quite limited. Most of the water had dried up except for a bit around the edges, Savannah was more than happy to walk out in the muddy water! She is a gorgeous girl! We all went to bed super, duper tired.