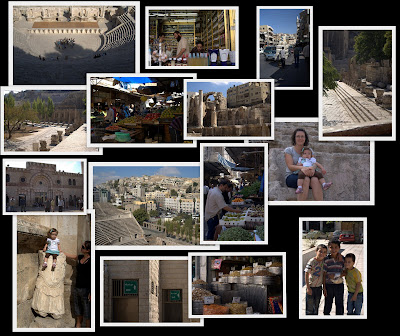 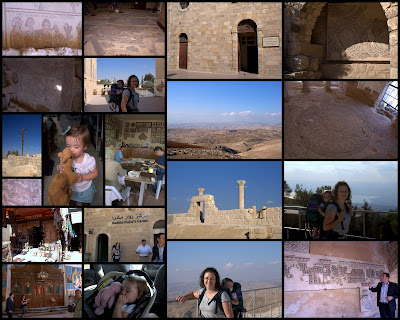 Madaba & Mt Nebo
Yesterday was a very busy day. I spent the entire day with Don Welty and his daughter Caroline touring Amman and the city of Madaba. Don bravely took the wheel of the Suburban whilst I navigated him around the town. You really have to speak "Arabic Car" language to make it safely from point A to B. The horn is a vital part of survival. Male-type aggression also helps push the car around the roads. One nice thing about the Suburban is it's size...no one wants to play chicken with a beast. We spent a good two hours seeing the Roman Amphitheater and walking along the main road for a mile or so. The theater is very impressive. It was twice the size of the theater in Jerash, but not as elaborate. Off to each side of the stage are museums. One is based on woman's dress, the other on the custom's of Jordan and the Bedouin tribes. The stairs to the top of the amphitheater are so steep my leg muscles cramped up!! Amelia had a good time (I think) posing on various ancient monuments.

We walked down a main street passing various shops stuffed to the gills with very specific goods related to that shop. The shops are very much like the European shops: one for shoes, another for plastic ware, another for spices, bread, milk, meat, etc. We stumbled on a packed fruit and vegetable market. The smells of all the fruit made my mouth water. As we passed each stall the scents changed from pungent cilantro to mild pears. Jordan is much cleaner than Cairo!! We had lunch at home then picked up Sela for a tour of Madaba. Sela is the first Jordanian man to be sealed in the temple and is from Madaba. He married a gal from Texas back in January of this year. He told us incredible stories about growing up in Jordan as a Christian. Madaba is one of the few Middle Eastern cities that has a presentable Christian population surviving from the days of Christ through the Islamic conquests. Madaba is a city decorated from one end to the other with amazing Mosaic tiled pictures. Sela said you could dig less than a meter and find a new mosaic. He took us first to St George church were the largest mosaic map of the area resides...a whopping 927 square feet!!

Then we walked through a market street to an another ancient church used to teach the art of mosaic tiling and as a museum. We saw some absolutely breath taking mosaics. The mosaics were originally assembled after the Greek style including depictions of gods, animals, and such. When Islam overtook the city showing the faces of humans and animals was considered perverse so the faces were rearranged beyond recognition! Sela showed us the first "pink panther" dating back to the time of Christ embedded in the church floor.

Sela led us to the tour ministry to show us some pamphlets and customs of the area. Caroline and I both purchased a mosaic picture to take back with us to America. We then quickly drove to Mt Nebo. Mt Nebo is supposedly where Moses smote the rock to bring forth water, where he saw the land of promise, and eventually "died." Sela said that the actual Mt Nebo is probably on the other side of Madaba on a different mount that proffers the same view and actually has more ancient monuments built up to honor Moses. The views of the landscape were incredible. We could see clear to Israel, a portion of the Dead Sea, and half the land of Jordan it seemed. We finally returned home very tired to yummy hamburgers and potato salad.

I am very proud of Amelia. She is being the perfect child lately. She just went with the flow yesterday taking in all the sites without complaint. She slept while we traveled and waited patiently for opportunities to exercise her legs when the chance presented itself. I finally gave in and let her sleep with me. The 2-4 hours of crying each night was wearing me out. Oh well!! It is nice sleeping with an octopus!! She flops around and mutters endearing phrases of "nice mommy" through out the night.

Dinner Sunday evening was fabulous. I love Indian food!!! Our hosts were very child friendly. Once again Amelia impressed the socks off me with her good behavior. She sat next to me quietly playing and snacking on whatever food came her way. By the end of dinner she was pretty tired. Our host took us on a house tour. In the basement her son had a drum set, he played a couple sets then went back to playing. I sat down with Amelia in hopes of keeping her awake, handing her a drum stick. She unenthusiastically played a beat. I handed her the other one and played a couple beats for her. She tried then perked right up, the most delicious giggle stumbled from her lips. She started rolling those sticks just like a pro, laughing at each interval. It was hilarious. Jeremy caught the event with his cell phone camera...too bad he doesn't know how to download the video. Looks like we might have a natural drum player on our hands. I got our host's wife in trouble by showing her how to digital scrapbook!! His wallet is now in jeopardy...

Today was more of a down day. I accompanied Mom to an Attache's wives luncheon hosted by the British. Amelia earned more than one coo and kiss from all the ladies. She stuffed herself with chips...no one else was eating them, probably due to her licking the chips and returning them to the bowl! I met about 10 ladies from different countries of the world. Wow...

Posted by Jenni Call at 6:45 AM 3 Stupendous Remarks