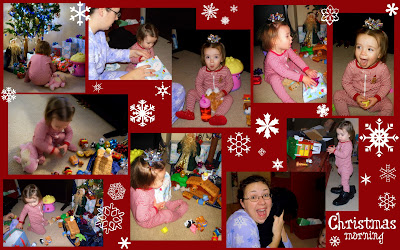 Christmas morning! Hooray! We got up at 8 am...it was so nice to sleep in! First we ate some breakfast then introduced Amelia to the secular side of Christmas excitement. She was totally distracted by the Little People Nativity I arranged under the tree. She pushed the angel over and over filling the room with Away in a Manger. We tried to show her how to rip open wrapping paper but the Nativity and Lego blocks from Grandma Debbie was too much! I ended up opening most of her presents! Justin sat on the couch playing photographer and opening his gifts. Amelia loved the little kitty and doggie we got her. She also really liked the Little People Farm because it makes noises. We are trying to get her ready for life out in the country. The worst part about children's toys is ironically taking the toy out of the box. Sheesh, I've never seen so many ties, screws, tape, cardboard, etc to ensure the toy stayed in the package. It took pliers, scissors, and elbow grease to pry the toys out of the boxes. We basked in the glow of our tree napping, playing, and cooking. It was a PJ day until 4 pm. Amelia thought Justin's new shoes were pretty comfy. Jana and Joe came over to play for a while. I made traditional clam chowder we usually have on Christmas Eve for lunch. While I cooked we watched Elf. We LOVE that movie. De-bo stopped by for a second to play with Amelia and say hello.

Around 4 we bundled up and drove to Charity's home for Christmas dinner. Melissa and Mom made a yummy ham dinner with green salad, scalloped potatoes, rolls, and my cranberry salad. Everyone was running around playing with new toys and hyper on goof balls. The snow started to pound down around 6:45 with sleet that quickly turned to heavy snow. The drive took 30 minutes longer than usual. By the time we arrived home at 8:30 8 inches of new snow covered the ground. To celebrate Christmas and the new snow we hopped in Justin's car (complete with emergency parking brake) and spun doughnuts in the DWS parking lot. It took about 15 runs around the lot to smash the snow enough to get some good spins. Amelia enjoyed going "whee" around the parking lot.

Posted by Jenni Call at 10:08 AM 0 Stupendous Remarks