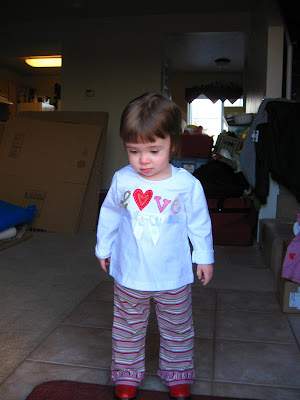 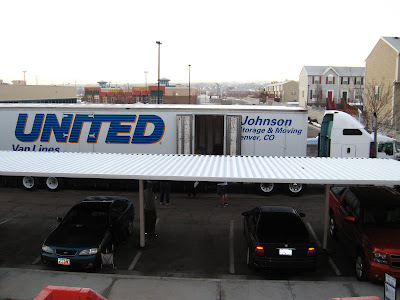 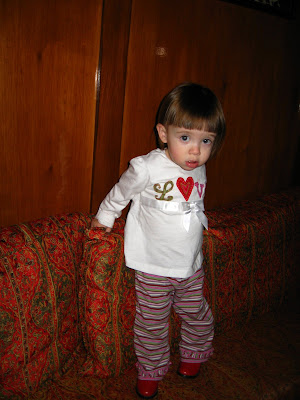 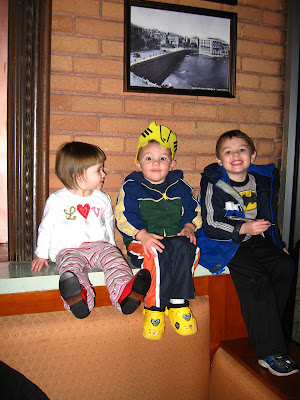 Shelf Mates
We are here in Sidney now! The packers swiftly packed our whole house on Thursday, they even packed my toothbrush and all my jewelry before I noticed they'd blitzed through my closet. It felt strange to walk through towers of boxes in our old home. I've moved quite a few times in my life (29) but this is the first time we moved since getting married. Amelia kept asking me to "put it back" when something was packed away. We had a birthday dinner at Mazza's for little Jacob on Thursday evening. James and Justin went shooting before dinner to try out James' new gun. Dinner was not so great...it was ultra garlicky and not a yummy as usual. The kids found a shelf to sit on after we finished eating! It was sad to say goodbye to Jana and the Lances. Amelia spent Thursday and Friday morning playing at Kate's house! Thanks so much to Catherine for watching her. Amelia already misses her friend Kate. She asked for her on Sunday at church. Bummer!

On Friday the movers had everything neatly packed into the moving truck by 1 pm. It took us until 4:30 to vacuum, clean, finish patching walls, etc before we were ready to pull out. My neighbor Natalie came over with her really awesome Dyson vac to help us for a little while with the vacuuming. One day I want a Dyson!!! De-bo stopped by a little while before we pulled out. She also helped out with cleaning and the last few details. Amelia took a really long nap so Justin mostly held her while I worked. Our two cars were stuffed to the gills with items the movers would not take and stuff we will need for the next couple months. Before we hit the road we made a stop at Charity's to drop off our keys and give hugs goodbye. Amelia and Reagan entertained us with a ballet show. 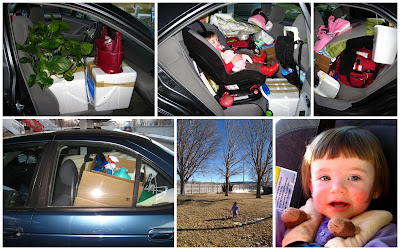 Our stuffed cars, pit stop in Wyoming, and Cheeto face
Friday night we drove to Rock Springs, WY, only a 3 hour drive away. We ended up arriving there around 10 pm so that worked out well. All my houseplants died in the car due to extreme temperatures. I am very sad...at least the containers survived. Amelia very clearly said "elelator" on our way up to the hotel room. She was ecstatic to be free of the car. Thanks to Elmo, Curious George, and a portable DVD player the drive was not so bad. She watched a movie and I listened to Brisinger by Chris Paolini. We were on the road the next morning by 9 am. The drive was much better in the daytime. Wyoming landscape is so diverse! The wind kept a steady stiff pace most of the way. We only stopped three times between 9 am and 4 pm. Pretty good time with an energetic toddler. Once in Cheyenne the wind picked up to speeds of 25 MPH plus. Good thing the wind was with us, made the gas mileage jump up.

Justin led the way to our little temporary home in Sidney on 1015 8th street. It feels quite large after living in a townhome with three levels. The home is only one level but bigger than the main floor of our SLC home. Without all our belongings to crowd out the house it is roomy. Amelia ran from the garage to the house yelling, "house! Isa House!" A lady from our new ward come over around 6 pm with a crib for Amelia we could borrow. Her room was completely empty, now it at least has a bed. We did not have much to unpack so everything was tucked away by dinner time. I made an emergency run Walmart for a couple things before Sunday.

Sunday Justin met a guy he knew back from his days of living in 29 Palms. When you mix the military (esp the Marines) and the church the world becomes very small. There is also a descendant of Anson Call in our ward! Our new ward is small. The ward was created in July 08! Still there is a wide range of ages and families attending the ward. Most of the families with young children are consequently employed by Cabela's. The meeting was pretty exciting because the RS presidency was rearranged. The old RS is now the nursery leader. Phew, missed that change by a hair!! There are 6 nursery aged kids, most are nearer to age 3. One little girl, Bella is about a week younger than Amelia. I learned she lives a street over and a block down from us! During RS I thought someone was dancing the tango on the roof. Turns out it was actually the wind and a tree entertaining us.

We endured the wind for 10 minutes after naps to enjoy the park. It is not too cold right now so the wind is quite strong (due to high pressure ridge). The Smith family invited us over to their home for ice cream around 7 pm. They have 6 cool kids ranging from age 16 down to 4. The Smith's custom built their home last year. Their kitchen was so awesome! Another couple from the ward came also, the Gaegallos. They moved from California to Sidney with a truck and fifth wheel. Their home in California is not selling, they've already reduced the price from $840,000 to $445,000. I could NOT imagine losing that much money on a home. The stories Sis Gaegallos told about living in a fifth wheel in Sidney were hilarious. They could write a book about how to deal with wind, cold, ducks, and water living in a fifth wheel. 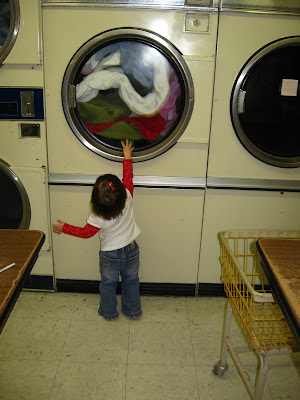 Watching Mimi in the dryer 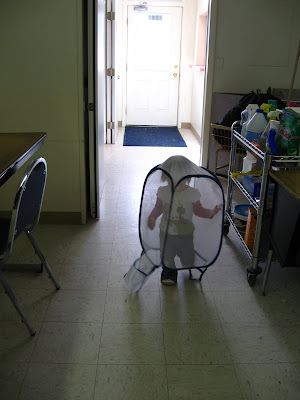 Hamper head
Yesterday Amelia had her first visit to the laundromat. She was done about 10 minutes into the wash cycle. We walked over the library to check it out and pass some time. Their library is decent, but no SL county library system. I will definitely miss the inter-library loan system SLC utilized. Back at the laundromat I put the clothes in the dryer and waited for an hour for the clothes to dry. Amelia discovered that the laundry bags were fun to crawl in, roll around in, put over your head etc. With snacks and patience we made it through that hour. I made a quick grocery run to Walmart. Amelia did not last long. By the time we got to the milk aisle she was squealing like a hungry kid. Folks kept staring at me, I felt like shouting "Hey, she's almost TWO and entitled to her fair share of tantrums." We cut the trip short. Justin was home when we arrived home for lunch. Our little laptop arrived so he worked on getting us some internet connection here in Sidney. Obviously, we are connected now. Yipee! After Amelia's nap we walked to the park. On the way there a train whistled through the town much to Amelia's delight. She rode the horsies at the park, consisting of horsies on a wheel. The fitness center is near by so we walked over there to check out their rates. We walked back home in time to make dinner. We took Justin a plate because he is working pretty late these next few weeks. Amelia and I finished our Walmart trip after we said hi to Justin. I am not feeling very well so I was very glad to get home and rest a little. 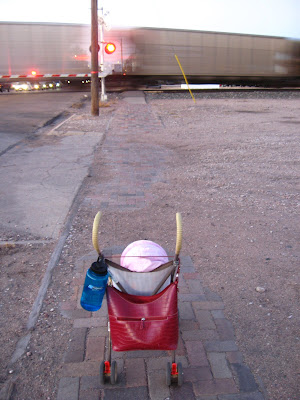 Train zooms by
I am so happy Amelia is sleeping better than I expected. She is only waking up 1-3 times per night, which is pretty darn good considering her track history. I am so glad be brought all her crib stuff with us. It was worth the extra space. We are glad to be here. My first impressions of Nebraska are of the constant wind and flat, flat landscape. Sidney is built in a depression so it looks like the city is built in a hole! I am not sure this configuration reduces the wind! There are no mountains to channel the wind so it rakes everything along the prairie. Mountains of sage brush are tucked into every corner. We hope our home sells so we can settle down with our creature comforts here in Sidney.

Posted by Jenni Call at 9:16 AM 3 Stupendous Remarks