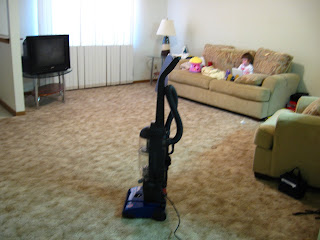 WaHoo!!! I am doing the vacuum dance right now!! I had J-dawg email the lady at work in charge of the "new people" about getting another chair and a vacuum. She delivered the two items today PLUS a mop for the kitchen floor. I am so excited. The chair is bar level so is way too tall for the table, thus the new chair is now Amelia's. We can eat meals as a family. I filled up half the vacuum chamber vacuuming the living room floor. Yikes...it was mostly due to me and my crafting remnants. Amelia helped by crumbling cookies, cereal, and crackers all over. My heart feels bigger having one small prayer answered. Thanks to Justin for actually emailing the lady and props to the lady for delivering. 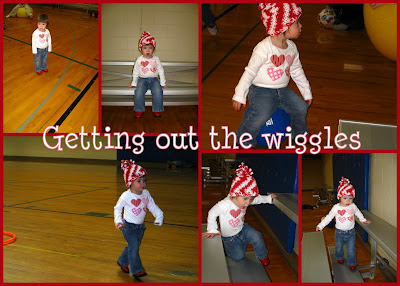 We have Internet issues. Yesterday the Internet was down all day long. I made 6 new shirts to sell and made a trip to Walmart. We had lunch with Daddy at McDonald's mostly to get out of the house. It was sunny yesterday and a balmy 7 degrees outside. Justin said his hands were almost frostbitten in the morning trying to scrape out his car, the weather station reported it was -12 degrees that morning. We stopped by Cabela's to purchase some gloves for me since they were packed with just about everything else we own. It felt nice not to have icy fingers!!

Tuesday evening our ward hosted a baby shower for two ladies who will have babies in the next month. There was a delectable spread of food, I resisted and munched on my apple instead. Amelia did not follow my train of thought and instead ate some "birthday cake," which is any cake looking dessert. She recruited one of the girls to play ring-around-the-rosies with her for a full 20 minutes. Then she decided to dish out hugs to me, the girl she played with, and an unsuspecting and ungrateful toddler. As Amelia hugged the toddler, the toddler had the most delightful horror-struck face. She skedaddled as soon as Amelia released her. Everyone loved my cute little infant shirts, an apple and a cherry shirt for the little newcomers.

This morning Amelia and I tried going to the gym at 9:30 am. This arrangement worked a little better. Amelia was not thrilled at all to go to hourly daycare, but she went anyways. Maybe we need to build a little character in that little girl. Naw, she has more than enough character!!! After my workout we played in the gym with balls and hoops for an hour, mostly to make up for my conscience. Jeff called while we were playing. It was awesome to hear his voice! He should be stateside soon. 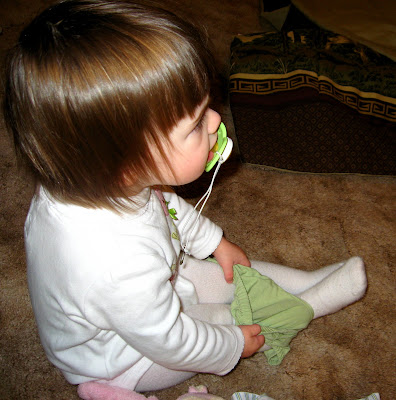 Sunday afternoon Amelia tried to put her pants on all by herself! She succeeded in getting both legs through a leg hole!! Goodness she is growing up so fast. We snuggled in after church on Sunday to watch the snow come down. It continued to snow all Monday also. The snow was thick enough that school was cancelled. Justin was disappointed work was not also cancelled.

I tried getting up at 6:20 on Monday morning to workout. I know that is not early at all but it was too much for me at this time. The rest of the day I felt so horrible, it must have been an exercise-induced migraine. Weird huh?? I need to figure out the best time to go. Amelia and worked on laundry mid-morning. The snow was really thick when we finally finished. I could almost imagine the mountains hugging us since the visibility was only about 10-15 feet. LOL. I am a bit homesick and really wanting my stuff back. This week I discovered we don't have a stinkin' mop. I was on my hands and knees scrubbing the floor with a sponge.