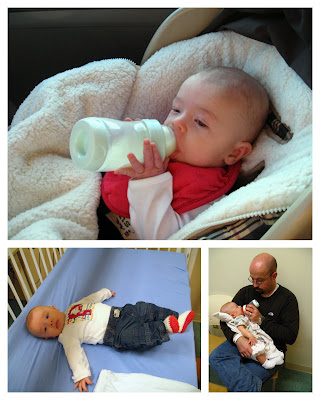 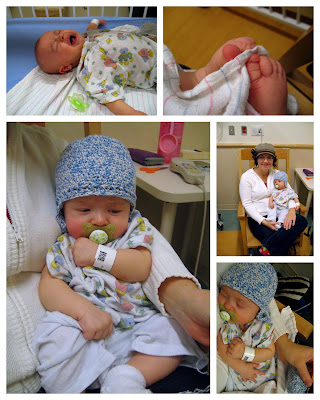 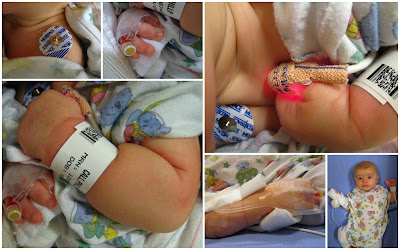 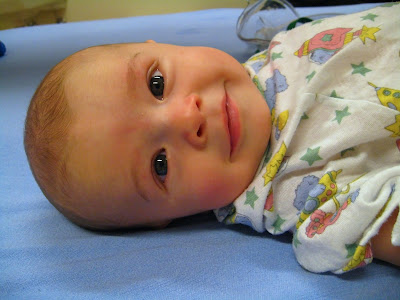 Phillip had his bronchoscopy on Wednesday. It was a super LONG day for everyone involved. We were up by 6:10 am and out the door by 6:50. Alison offered to watch Amelia for the day. When we left it was -18 degrees...without the wind chill factor. Brrrr! Phillip usually nurses at 7:30 but we had to travel in order to make it to Denver on time. He received his first bottle with gusto. Poor little guy was so hungry he even held the bottle himself! I brought along a pump and had the adventure of pumping in the car. Let's say it was a little cramped. We stopped in Sterling for gas and breakfast...okay, really...for Diet Vanilla Coke from Sonic. Yummy!

The Children's Hospital in Aurora is pretty amazing. The most frustrating part was finding a parking spot at prime hours (10:00). It took us 20 minutes to snag a spot. Once checked in we were in the procedure room and relaxed in 30 minutes. Phillip was being very cute with all the nurses, smiling and cooing at them. He had on a spiffy new shirt and hat for the trip. I was delighted to give away all my business cards. My kids are awesome at promoting my business! Justin fed him a little bit of pedialyte two hours before the procedure. Phillip was tired and hungry but still only complained a tiny bit. Pretty much he is a perfect baby. The doctor and anesthesiologist came and briefed us. He was in the OR for 40 minutes. Justin made a trip to Del Taco for lunch while we waited. Holy Smokes, we MISS Del Taco. Phillip woke up easily from the drugs and slept until 3. He was so hungry at 3 he nursed for nearly an hour. We stayed until nearly 5 pm.

Dr Kahn said Phillip has "laryngomalacia" and "tracheomalacia" both which exacerbate infant reflux. The awesome news is that he should grow out of the conditions by 18 months to 2 years old. The laryngomalacia causes a noisy "stridor" which is an abnormal, high-pitched, musical breathing sound caused by a blockage in the throat (larynx). In layman terms Phillip has a floppy tracheal wall, basically when he inhales his trachea partially collapses causing a strange noisy breath. We are glad he does not need further surgery and that the diagnosis was more severe. He is one a stronger reflux medication now and we are to keep him propped up most of the time. When he sleeps the Dr suggested using a small neck roll to open his trachea while sleeping.

Denver traffic made the trip a bit longer. Justin was kind enough to let me stop at JoAnns and the Carter's outlet in Loveland. We had another delicious meal at Noodles and Co. I feel a little BIT chubby right now after Thanksgiving, then Stake Conference meals, and now our Denver trip. My newly established exercise program needs a diet change too! My hands were stiff by the time we got home. I crocheted two hats and a pair of booties.

Mia did not have a good day at Alison's home. She only ate two bites of cereal, two bites of rice, a bite of pork chop, and a bit of egg. Alison said she only spoke a couple words throughout the day. It is really unusual for her to not talk! She perked up a bit when we talked over the phone. Alison said she talked more in that little while than she had all day. Thursday was NOT fun. Phillip was sore and grumpy and Mia was extra clingy and grumpy too. We had a PJ day!