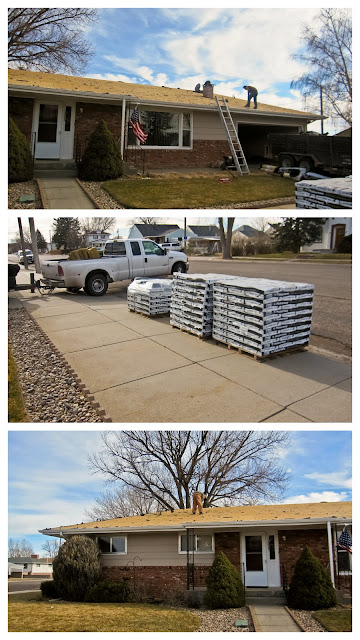 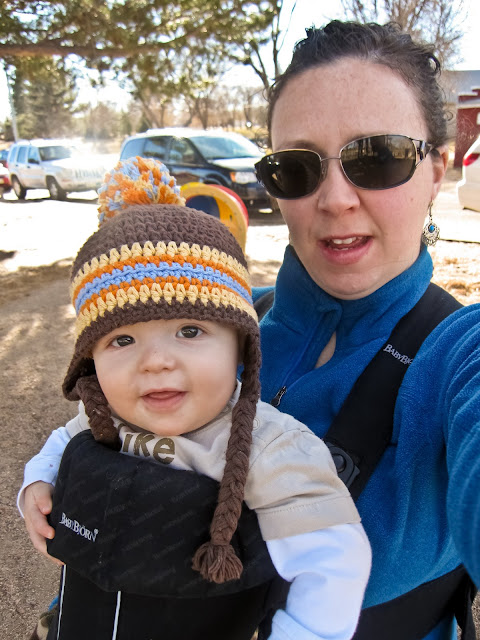 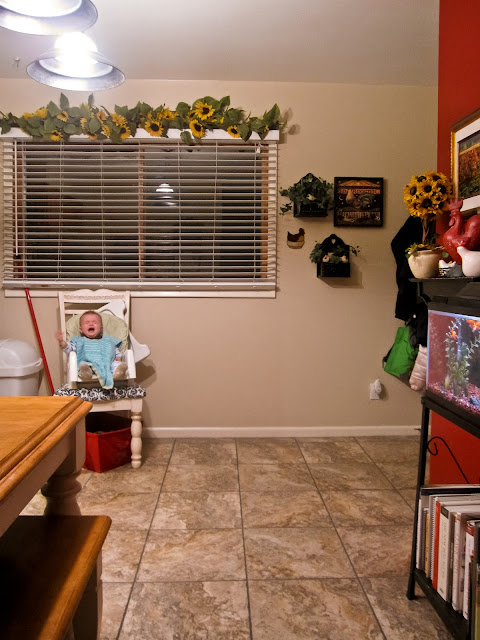 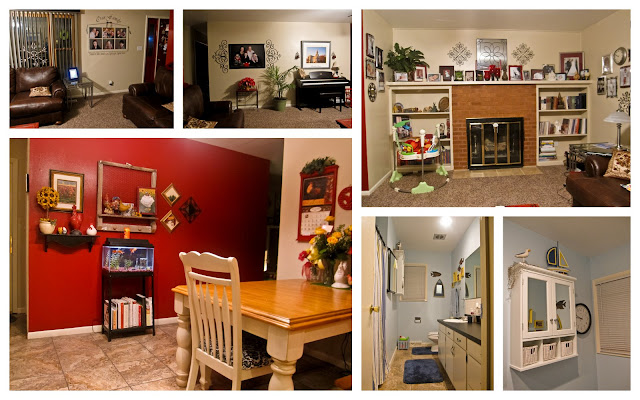 Collage of the livingroom, post Christmas, with our updated family photos; the bathroom cabinet, and my rearranged diningroom area. Moving out the wine/waterbottle rack makes the room feel much bigger.


I called the roofing company, we hired back in August, back in October. The company said they were totally backed up and most likely would not get to our roof until spring. I totally forgot about our holey roof...until Tuesday. Justin asked me if I knew where in insurance checks were. I put them in a special place that took me a couple days to locate. I called the company on Tuesday for a status update. They said the workers would be there the next day. A little while later I looked out the window to find a huge flat semi off-loading three flats of shingles. That was fast work. I cannot even begin to tell you how grateful I am that we had 18 hours notice. Wednesday was a bit crazy. The workers showed up around 10 am and worked until 6 pm, the entire house was filled with scraping, banging, and crashing sounds. The vents must be in the upstairs ceiling because we could clearly hear everything while in the basement. Phillip was determined to go outside and use the pneumatic nail gun. We worked on cleaning up the house and doing art projects. Amelia had preschool and a Dr appt. She woke up Tuesday night complaining of an earache. The Dr said her ears looked great (grumble). At least I got a diaper out of the visit for a poopy Everett...that was an expensive diaper. After a short afternoon resting time we geared up for a Walmart trip. I would have waited but we were out of bread, eggs, milks, and diapers. Shoot. It was hellacious. Period.

To back track a bit Miss Ella spent most of Tuesday with us. I want to commend Alison and Matt for teaching that girl to pray. When the girls started to squabble I asked Ella to say a prayer for us to bring peace and friendship. She nearly waxed obtuse during her prayer, it was so endearing. I love hearing kids pray. A while back I asked Justin to expand his meal time prayers to more than one sentence for the kid's sake. Now he says 3 sentence prayers! LOL. The girls did not argue or fight much after Ella's prayer. While the girls and Phillip played I packed up Christmas. Our house was a disaster zone for two days while I worked on rearranging and cleaning. Things look much better now!

Today the weather reached a record high of 74 when the wind did not blow. The kids and I spent about 5 hours outside in the sunshine. It was heaven. We prowled around for loose roofing nails, made mud pies, rode bikes, went to the park, and had a picnic. I even spray painted a new-to-me (Salvation Army) shelf and finally sorted through my tangled mess of jewelry that Phillip made. We miss being outside.

Everett does the cutest thing with his lower lip of late. He sucks on it then pops it out with a loud smack. He hums whenever I carry him around. He seems so grown up the past few days. Stop it! I already miss the newborn baby part. Phillip learned how to dive into his bed on Monday. He throws all his Christmas toys into the bed then dives in head first...then yells "...'elp me, 'elp me!" Amelia is constantly whining about how she can't do this or that, how she is stuck, or needs help. Phillip, hearing all her yammering on, took up her example. He will put his foot under the stool then start yelling, "I stuck, I stuck, mommy!" He will stand on a stool and try to reach something then yell, "I can't!" After he yammers on for a couple sentences he unsticks himself, helps himself out, or does what he needs. I am not sure if he is putting on a parody of Amelia for humor's sake. Makes me laugh every time!