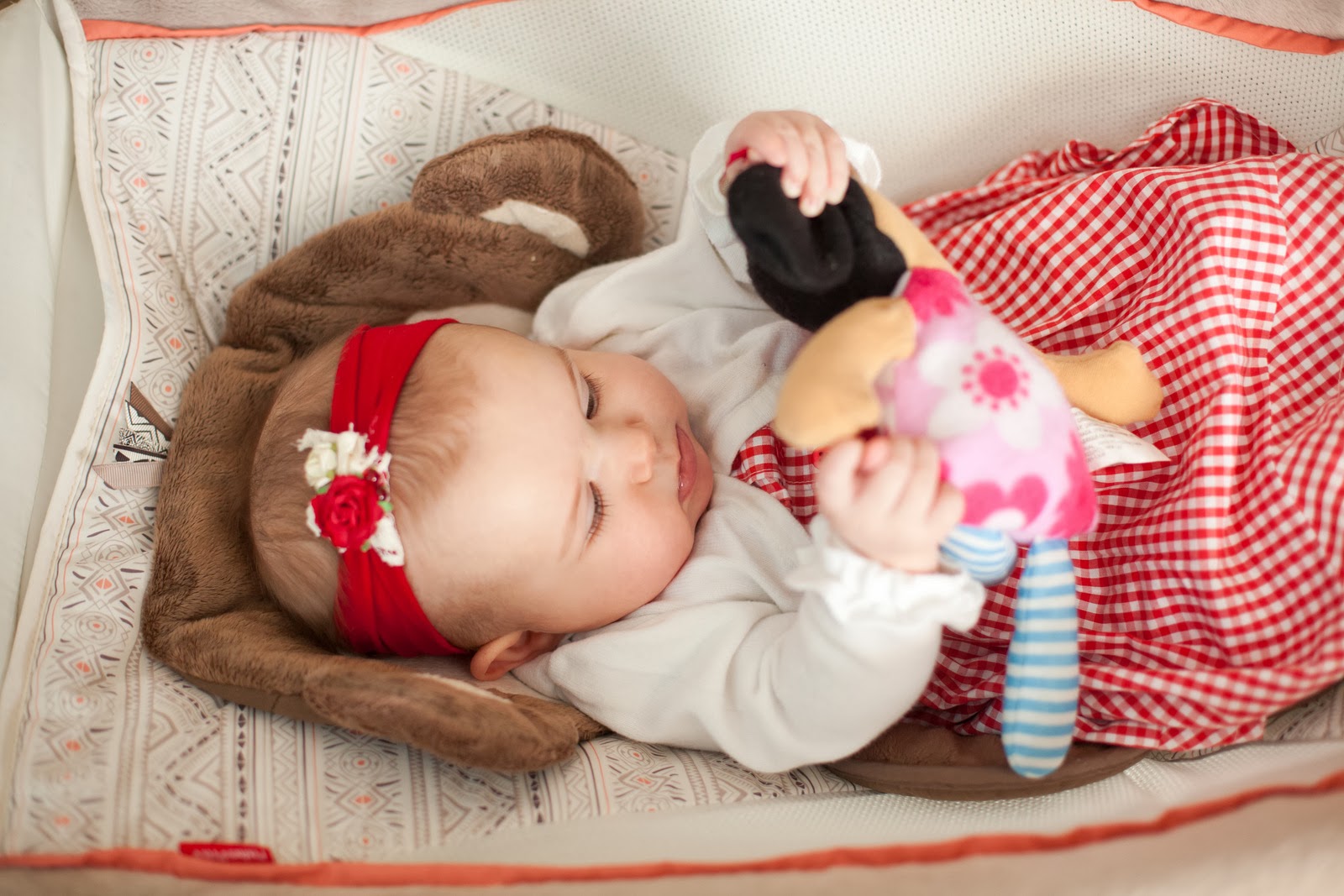 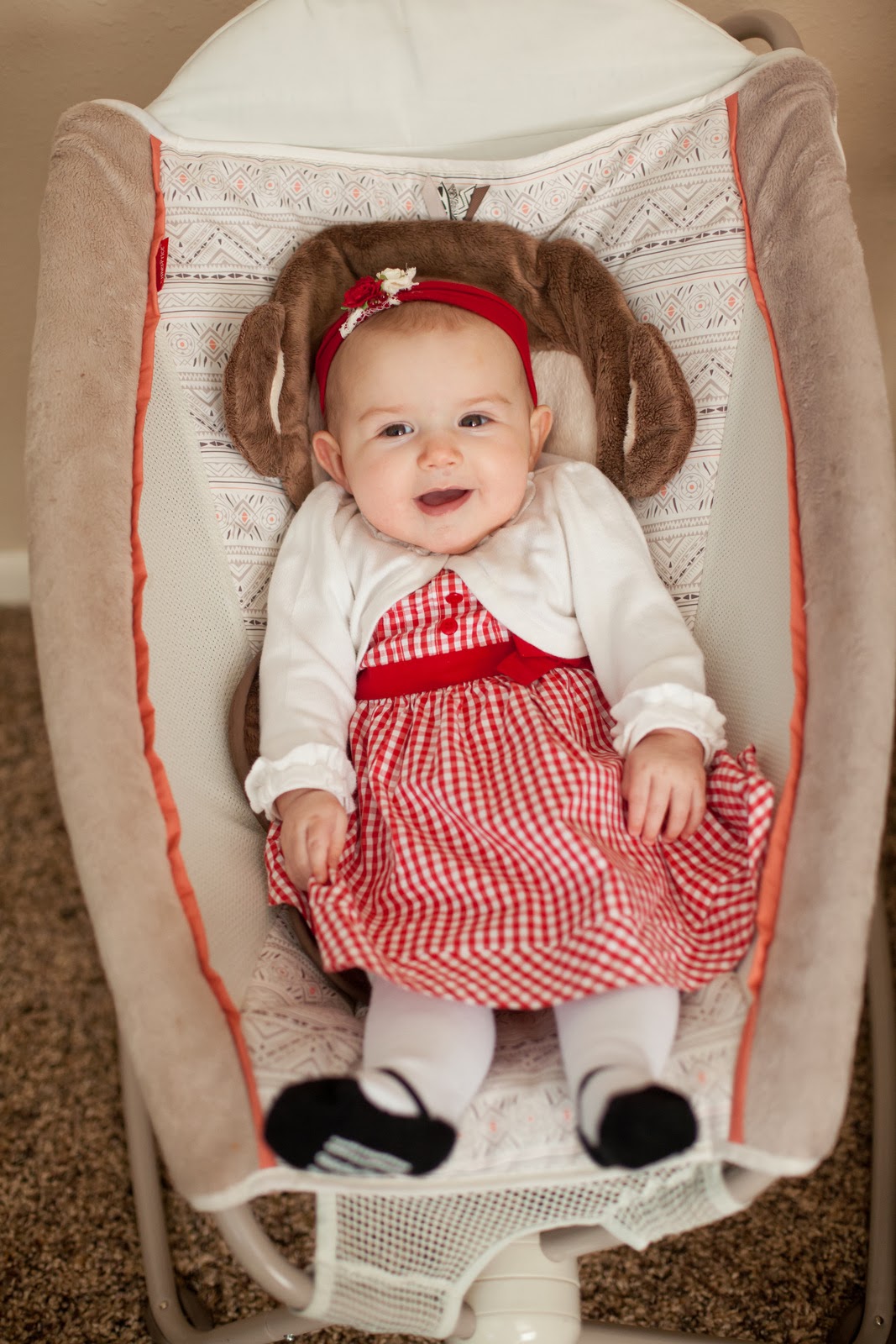 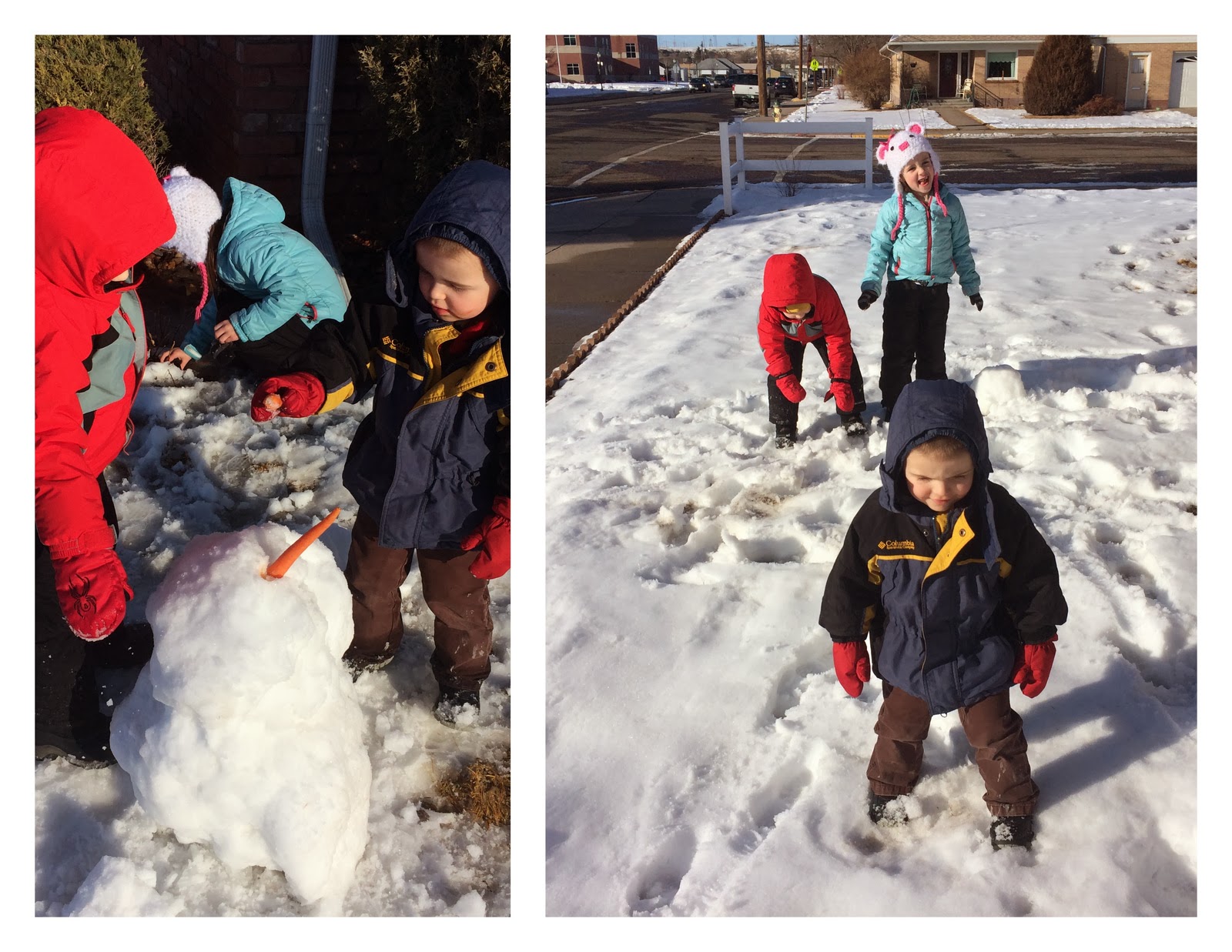 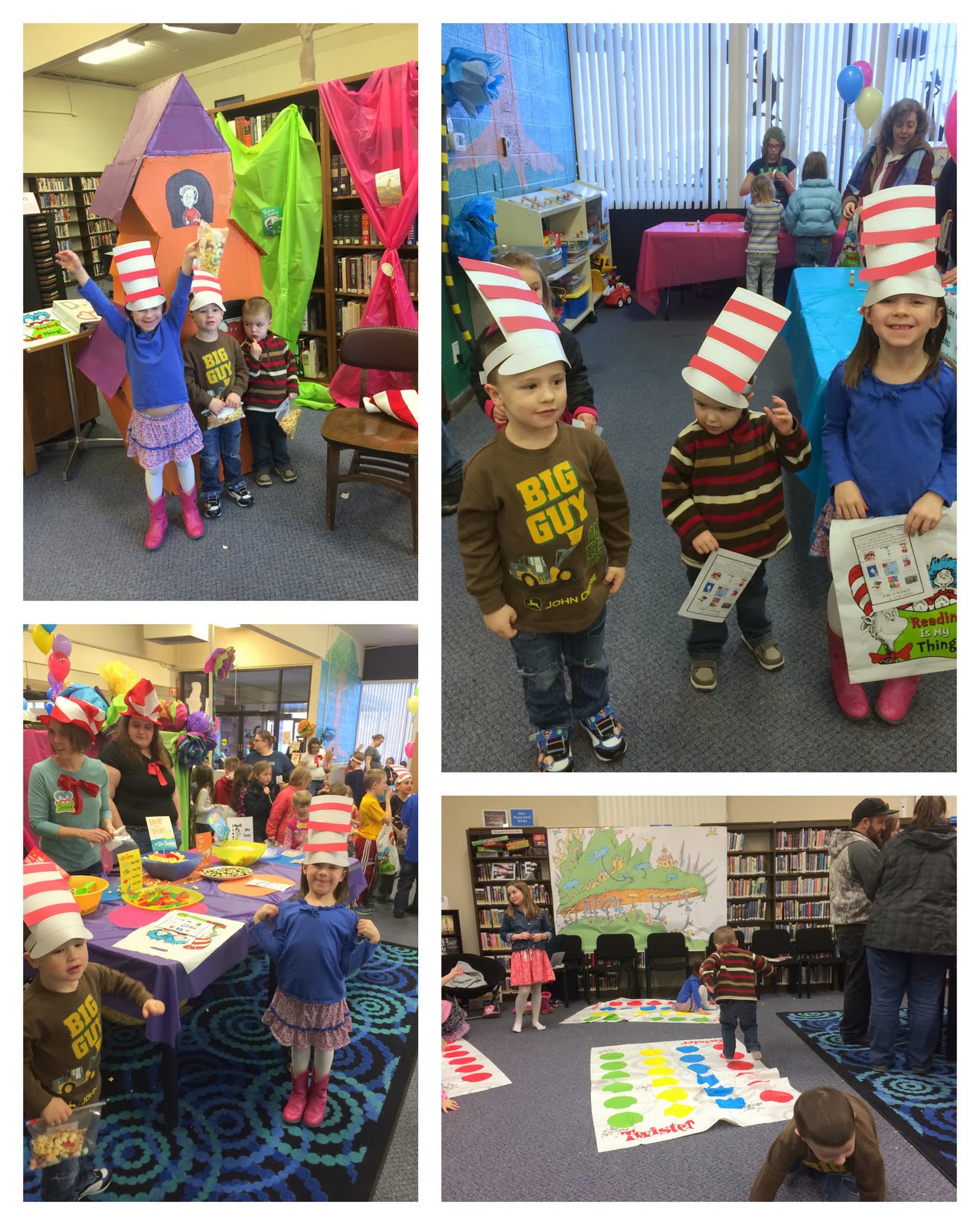 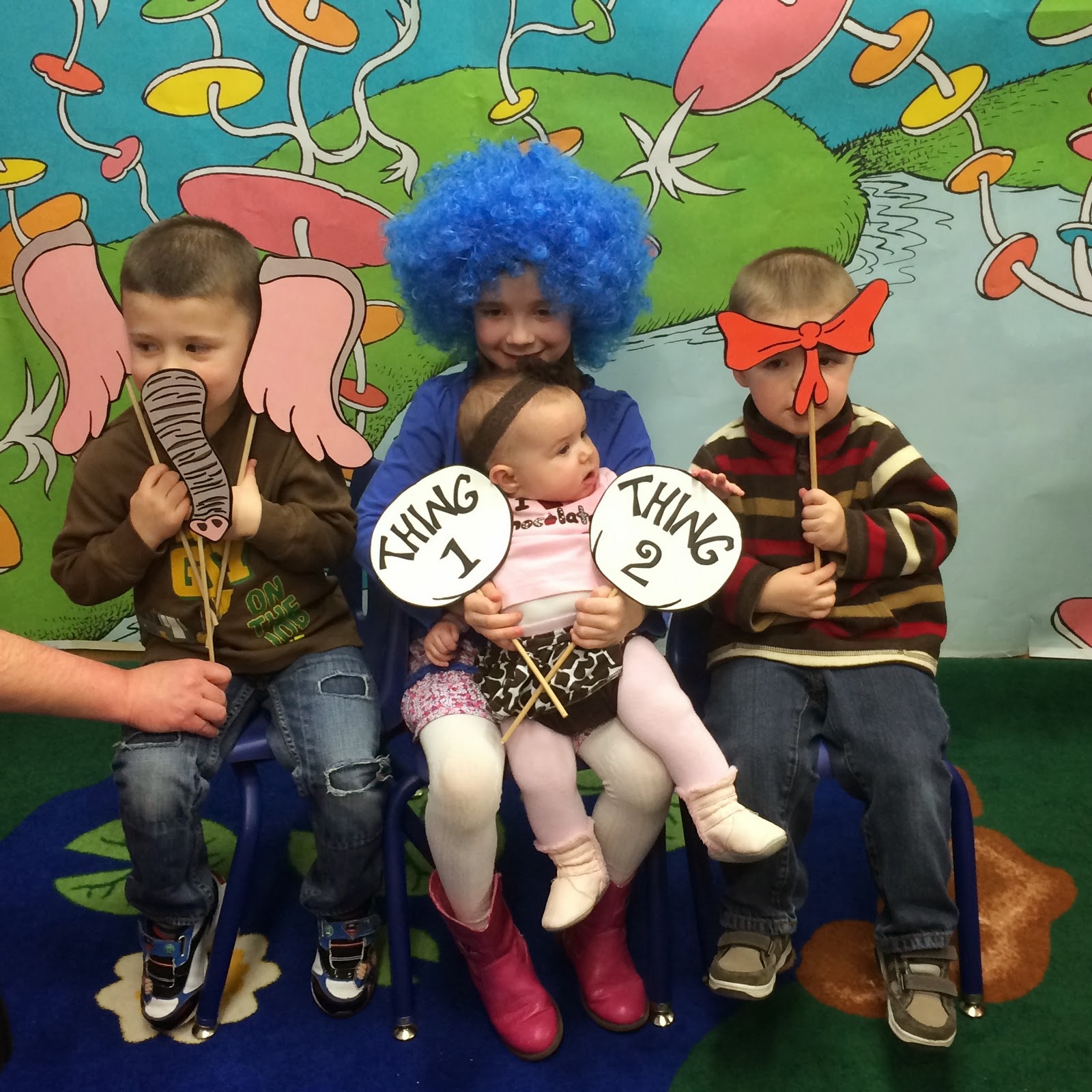 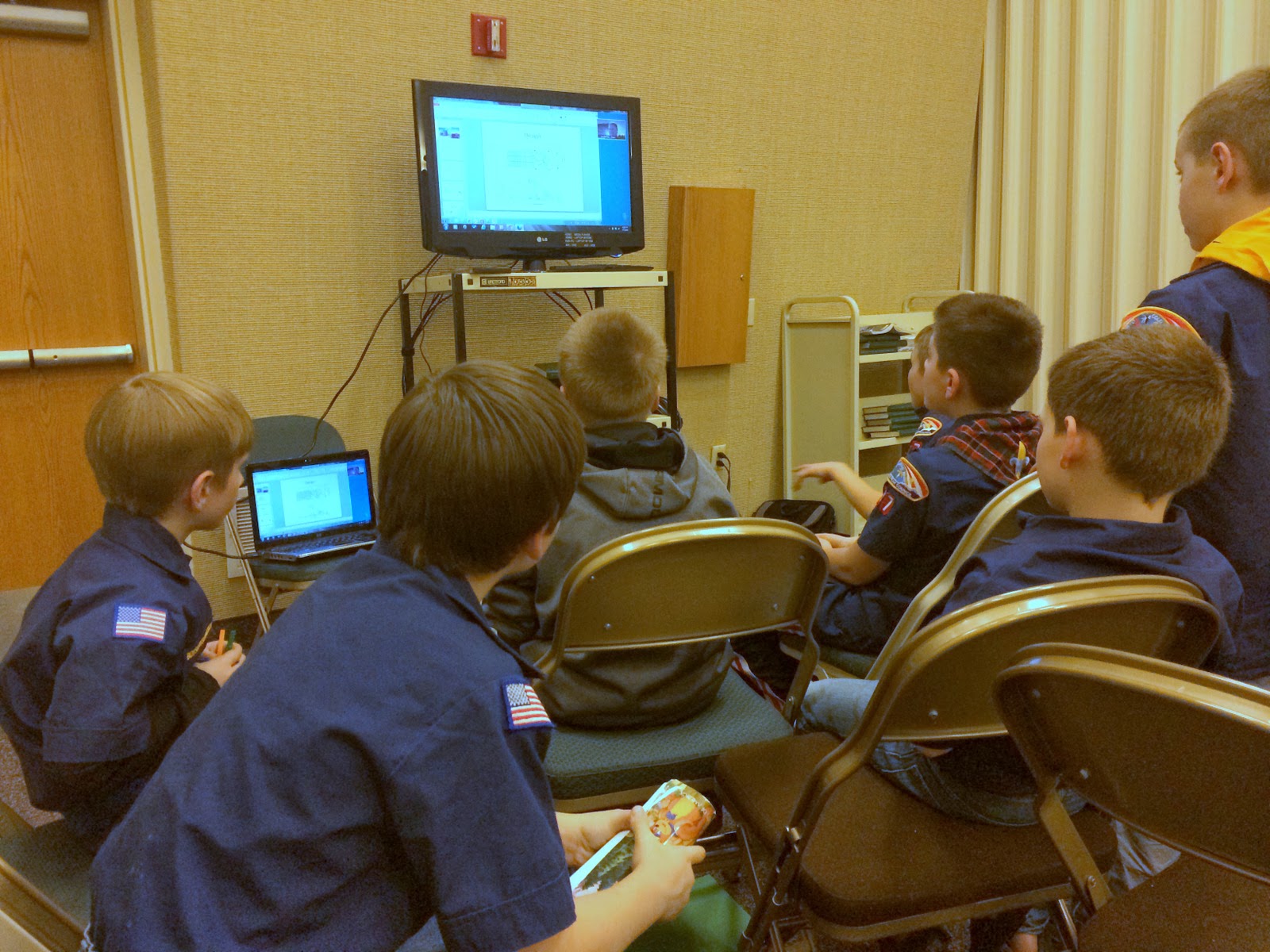 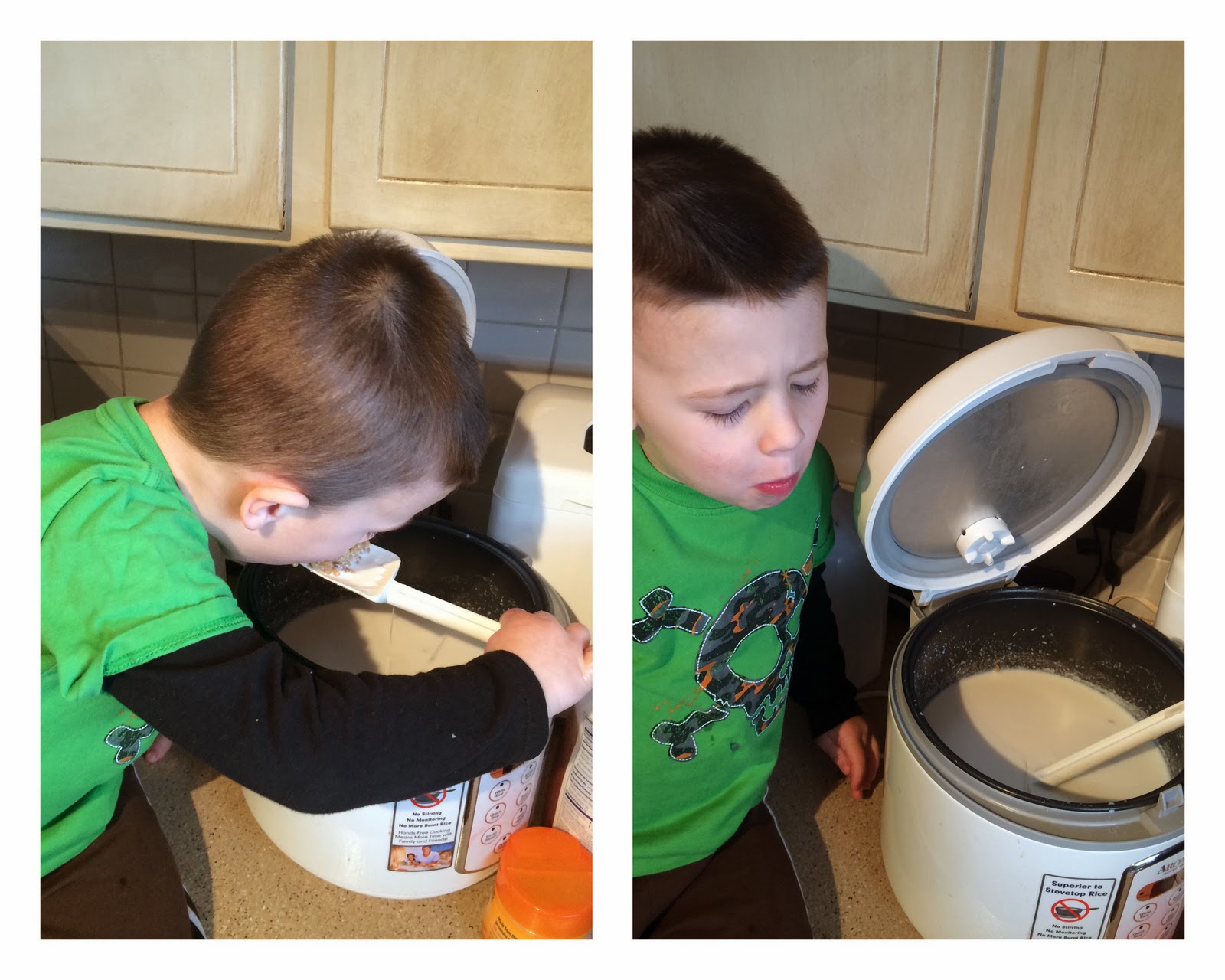 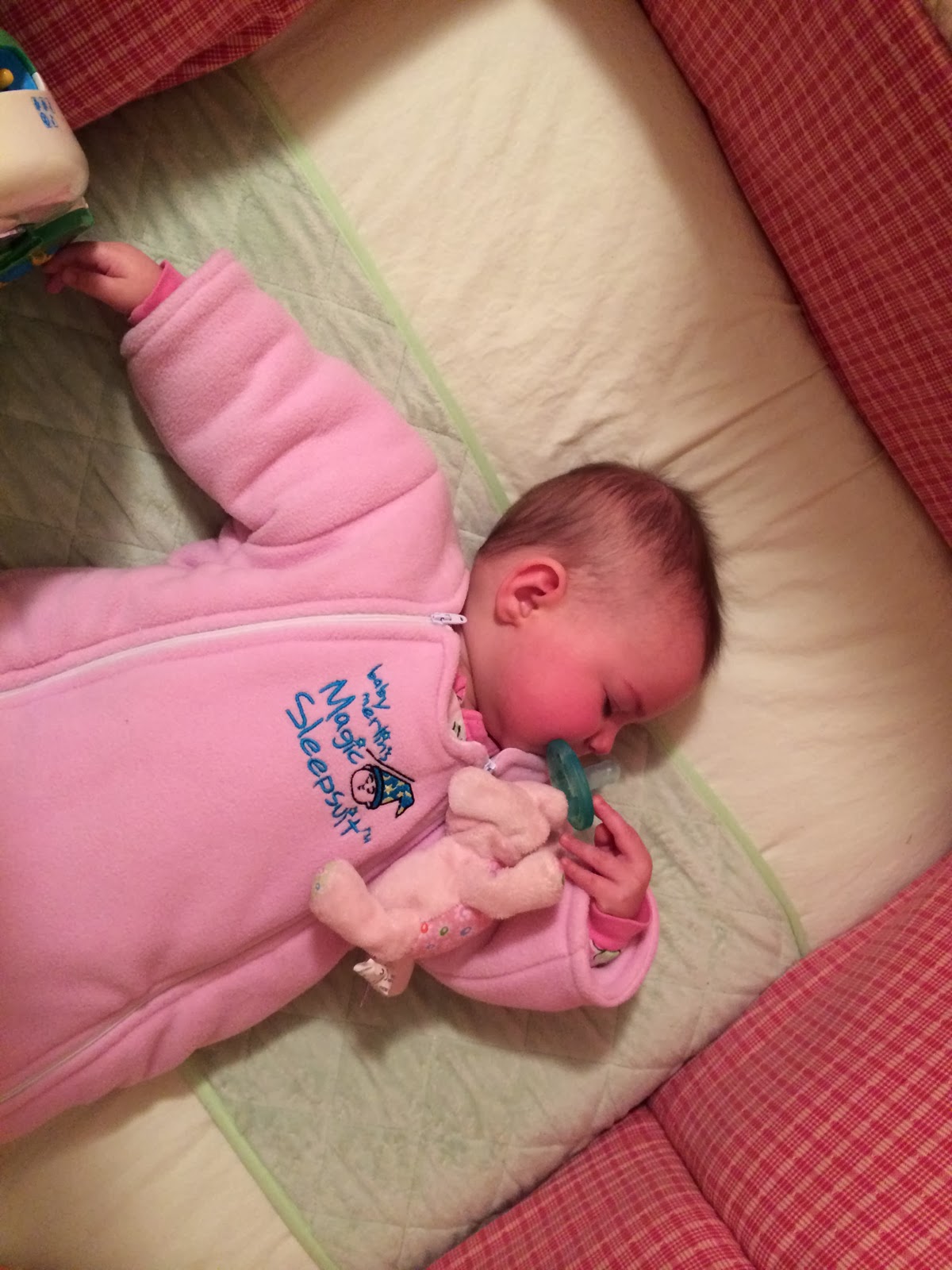 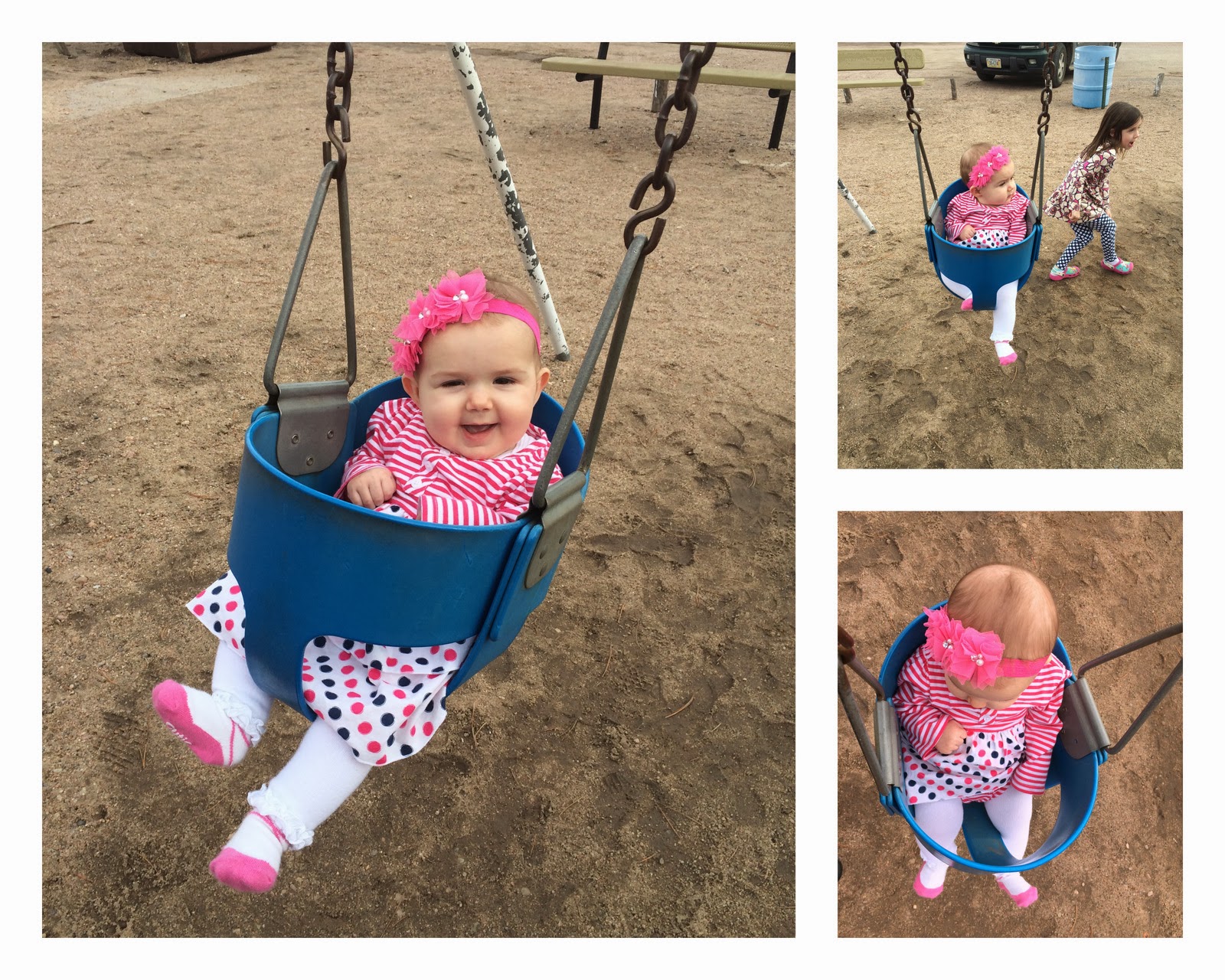 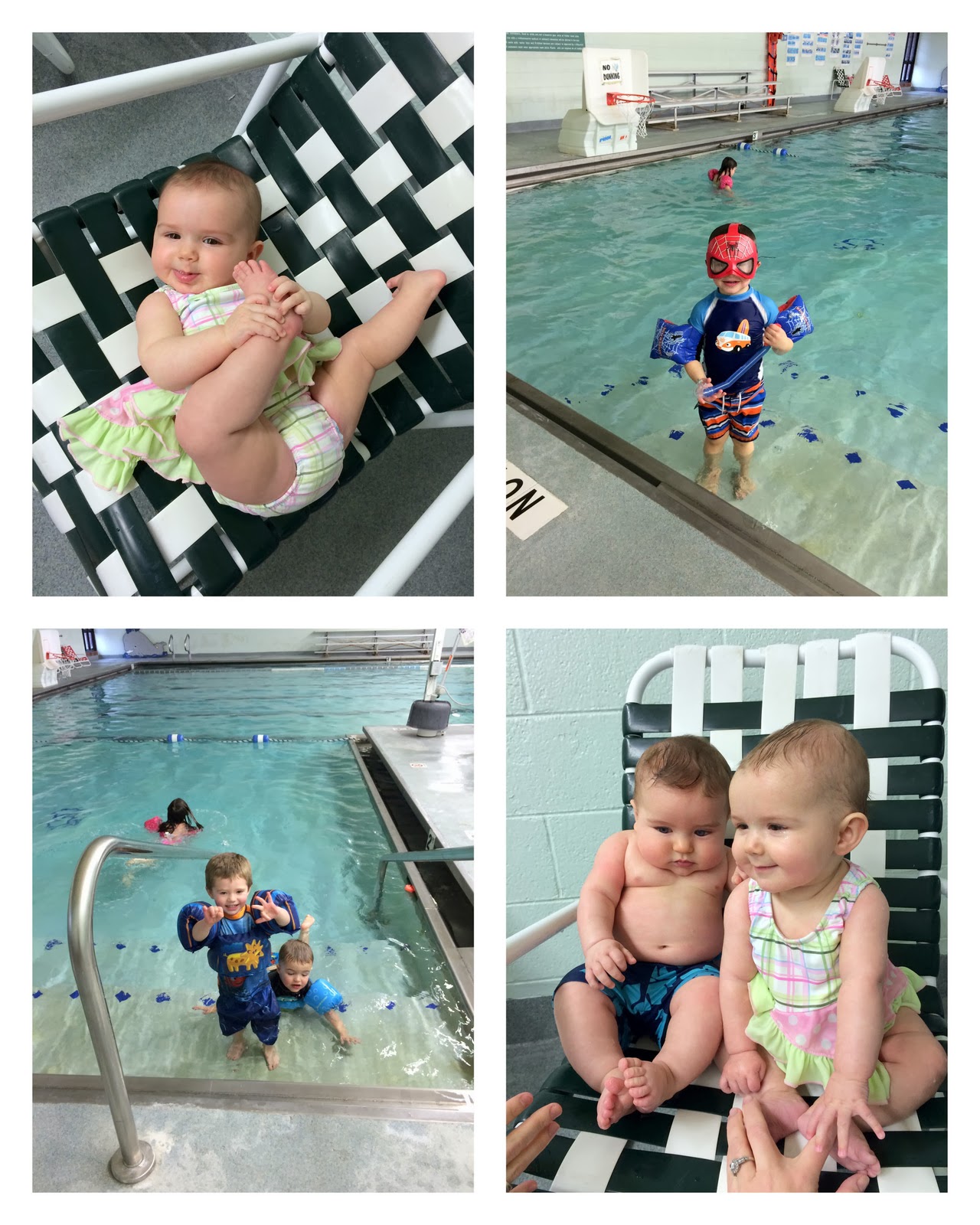 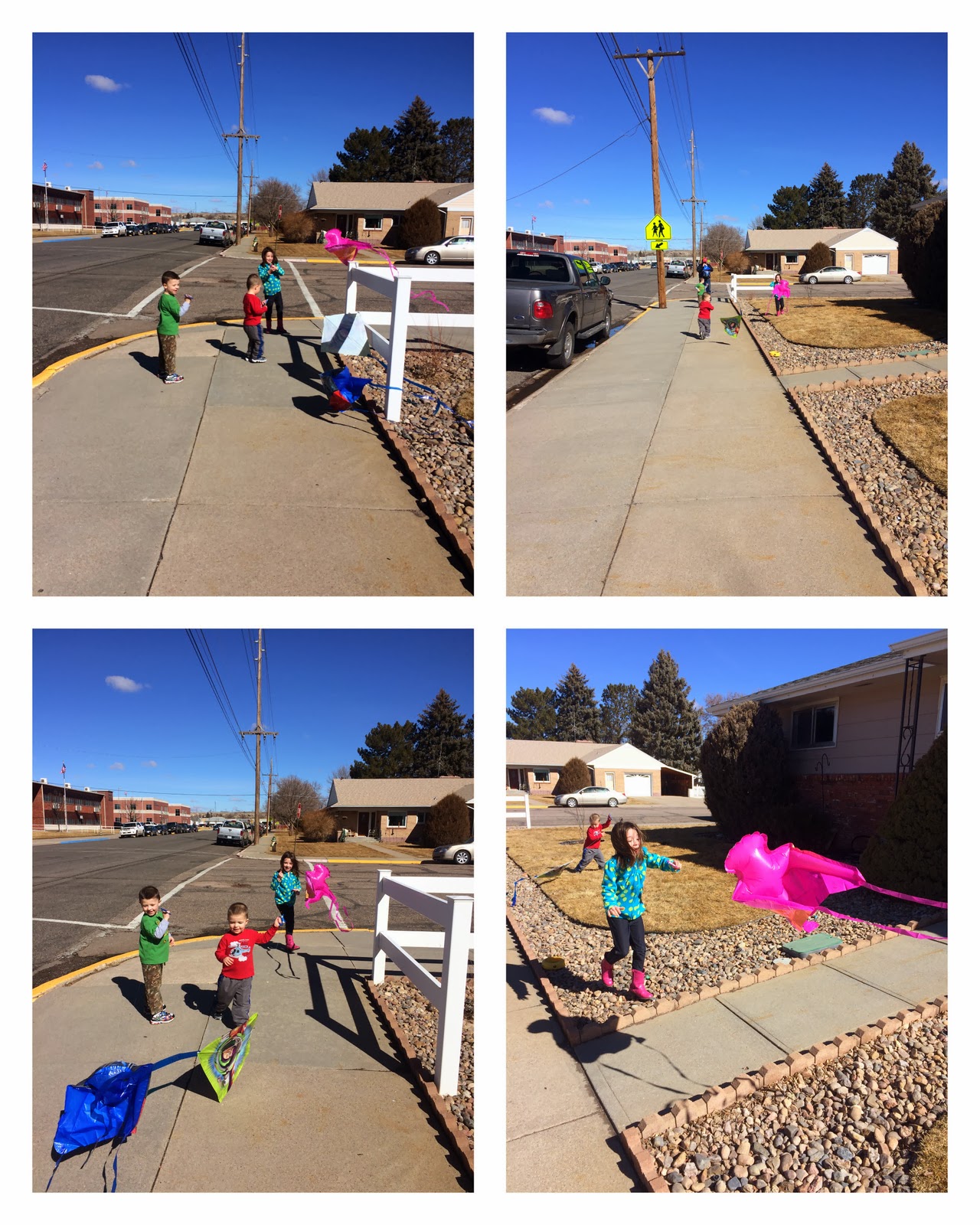 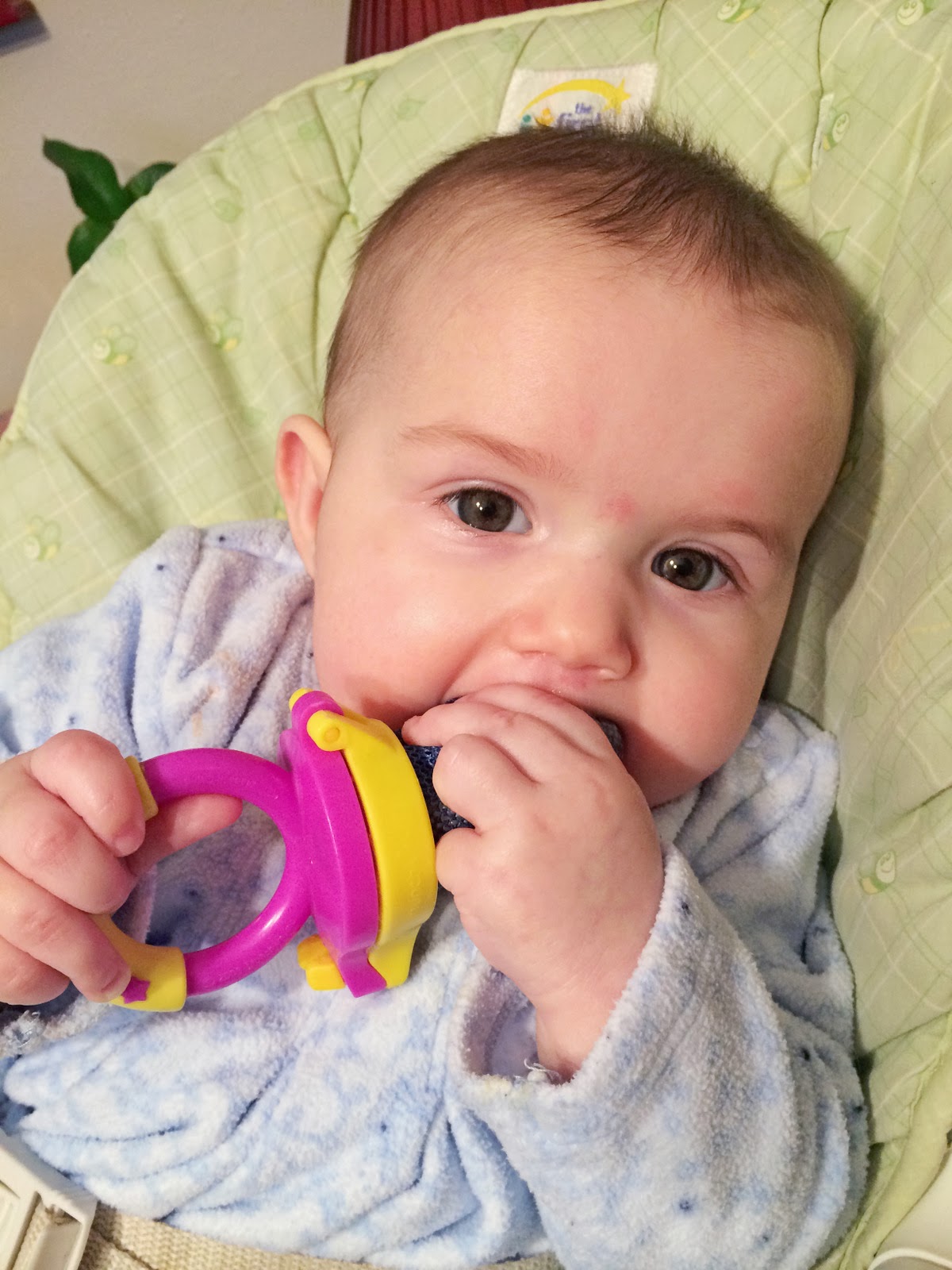 Our kids LOVE the Dr Seuss books. I mean LOVE. I love them too. Our library hosted the cutest birthday party for Dr Seuss this week. There were 8 stations the kids could go to: make a cat hat, make cat whiskers, take a silly photo, make a truffela tree, play twister, get Seuss snacks, go fishing, and listen to a story. It was awesome. We blended right in with the other kids and had an enjoyable hour with our friends. We celebrated FHE and Dr Seuss at the same time.

The snow is all melted! Warmer temperatures finally moved in around Wednesday. Amelia, Phillip, and Everett worked on making a snowman Monday and Tuesday afternoons. I think the snowman ended up with 8 carrot noses. The boys kept eating the nose off the poor snowman. We discovered over 150 rocks the boys threw into the snow on the grassy areas of our yard. Our lawn reminds me of a trailer park right now with all kinds of broken down stuff, rocks, and dead plants. Justin said he would park his blue car in the sideyard to complete the effect. We really have our work cut out for us this spring to get the outside in tip top shape. I've spent too many springs and summer either pregnant or caring for a new baby. Makes it hard to keep up with everything.

Wednesday my scouts finished the Engineer badge. We Facetimed with a geological engineer who works in Utah building gas refineries. The boys were actually quiet and attentive during his presentation. The boys got to see a huge machine that works like a chainsaw tearing gigantic holes in the earth. Next we experimented with a pulley and made 4 different types of bridges. Everett has a favorite game on the iPad called "pinch the peppers," it is supposed to teach a child how to perfect the pincher move with their fingers. Phillip reached over and pinched one of Everett's peppers. Everett, enraged yelled at Phillip: "Don't pinch my peckers....DON'T Pinch my PECKERS Phillip!" I died! A little while later the boys heard a wood pecker outside working on more holes in the dead tree across the street. They yelled at the bird for a long while, "stop you pecker, pecker...STOP!" I thought the teenaged boys walking home from school were going to die from laughter. Ahhh, the innocence of babes. Our van reached critical winter-kid-itis. I spent over two hours scrubbing and vacuuming it out. To keep the boys amused I gave them spray bottles and a rag to wipe off the dirty exterior. They sprayed the van, each other, the ground, and cleaned their bikes!

Phillip made himself breakfast. I made steamed whole wheat in the rice cooker. He found the wheat, pour half a gallon of milk in, two cups of sugar, and stirred it all with a large scraper. I found him reveling in raptures of deliciousness. He told me not to worry, he had breakfast covered. Evelyn now sleeps in a magical creation called Baby Merlin's Magic Sleepsuit. It is indeed magic. Reminds me of a puffy snowsuit. Basically it is so puffy around the elbows the baby cannot easily bend their arms. It gives Evelyn more ability to move while she sleeps but not wake her up. She is back to sleeping like an angel!

School was cancelled Thursday and Friday because the Girl's basketball team went to State. No complaints here! We went to the park for an hour Friday afternoon. Evelyn got her first swing ride. The boys were very excited to be outside. We ran around the pond several times. Our fun was cut short when Phillip had a poop-cident. Gross.

I convinced Sarah Wood to go swimming with us on Friday. We met at Santiagos for a fun girl's lunch. Phillip locked himself into the bathroom. He was whooping like a gorilla when I finally heard him. The windows were covered with condensation, Phillip noticed of course and decorated the windows with his name. I am so proud. Evelyn sang her baby songs at the top of her voice. I felt sorry for the other patrons. We swam for an hour. RJ was not very confident about the water for a while. Once he learned to trust the floatie he had a blast! Phillip convinced me to buy him a spiderman swim mask, snorkel, and floaties at the consignment store. He taught himself how to swim. Rule #3 is: stay within 2-3 feet of non swimmers. Excellent rule. What do you do when your FOUR kids are not competent swimmers. The lifeguards kept yelling, RULE #3! I yelled back there is noone else in the pool, grab your chair and sit by the edge. Help me instead of yelling at us. Grrrr. I was grateful when one of the guards moved closer.  Both Evelyn and Michael loved the water! Michael was so worn out he slept on the locker room floor while we dressed. We survived.

Saturday we put some kites together for the kids to fly in the wind. Cheap kites are awesome because they last about as long as a toddler's attention span. The kids moved from the kites to making mud cakes in my garden box. Amelia signed up to collect donations for the American Heart Association. We walked around the the neighborhood meeting our neighbors and raising money for a good cause. I met neighbors we've never talked to yet. It almost felt like proselyting...except I had 4 kids with me instead of a well-behaved companion. One neighbor one block away has a girl in First Grade! I had no idea! Maybe we can have some playdates! Another guy is Cabela's lead photographer. I was very excited to meet him. We raised $45 in about an hour. Good job Amelia. Justin worked on the door frames and hinges on two doors. The hinges were coming loose due to loose screws not tightening in the frame. He's patiently worked on most of the door frames in the upper floor over the years. It was totally my fault! I was not careful while painting the doors and trim when we first moved in. All the doors are hardware got mixed up causing a lot of troubles. Blush.

This afternoon I found Amelia quietly coloring while listening to A Child's Prayer. She told me she was trying to have a spiritual experience so she could bear her testimony in FHE. Life stopped for a moment as I realized how much she is growing and maturing. She is a wonderful girl.

The kids finally figured out their kites. Or maybe their kites worked better with the windy gusts tearing through town. They flew kites for an hour or so outside. I parked Amelia on the north corner and Phillip near the driveway. They stayed put and made those kites dance. Everett ran in between the kids trying to catch the kite tails. I absolutely love those simple moments like watching a kite dance in the wind.