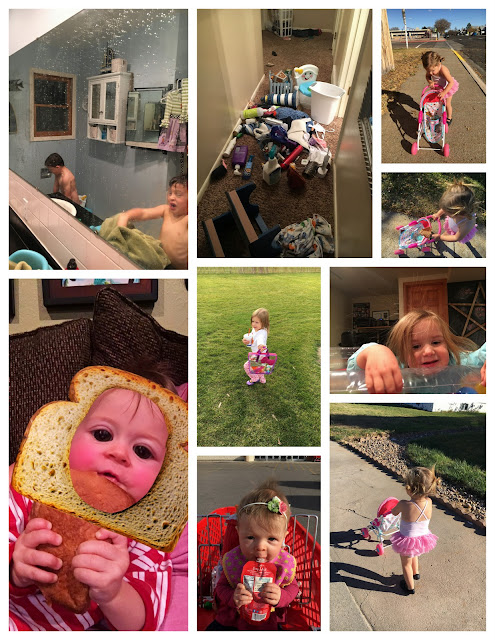 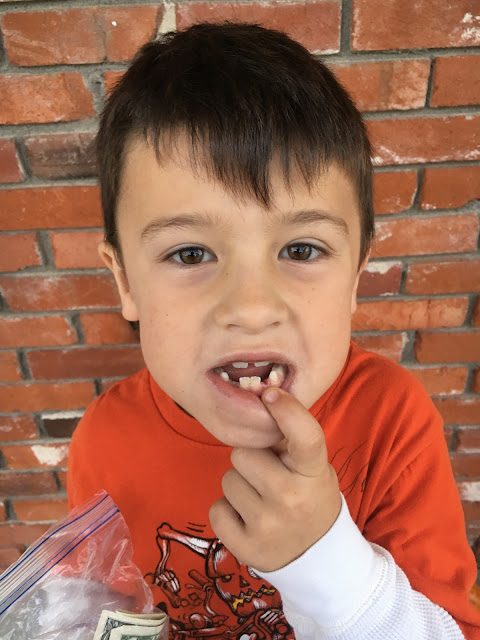 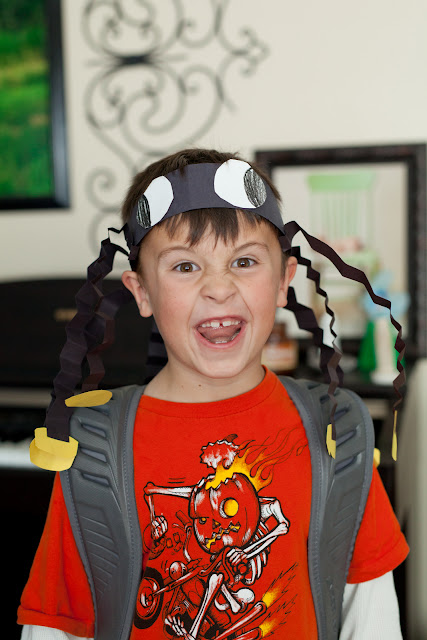 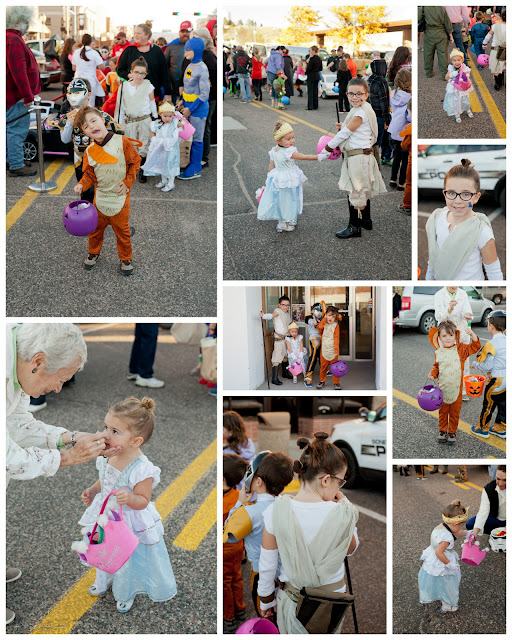 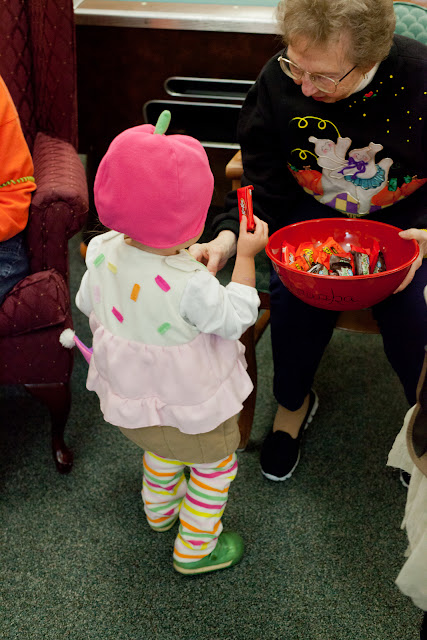 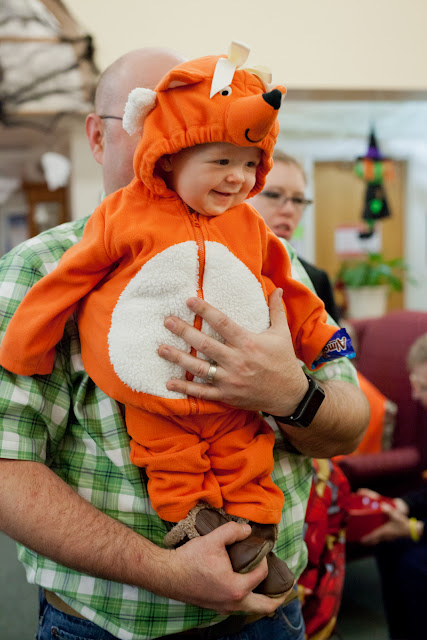 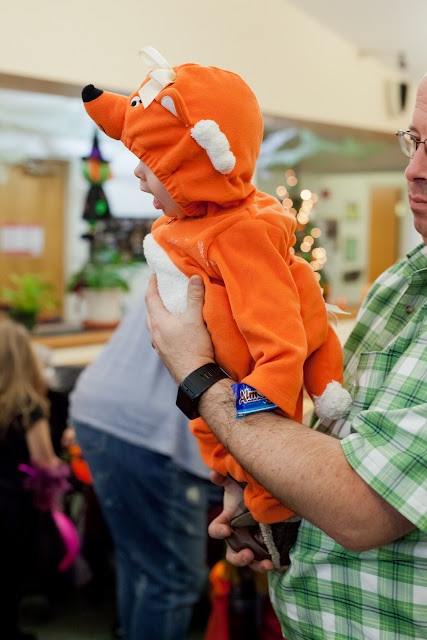 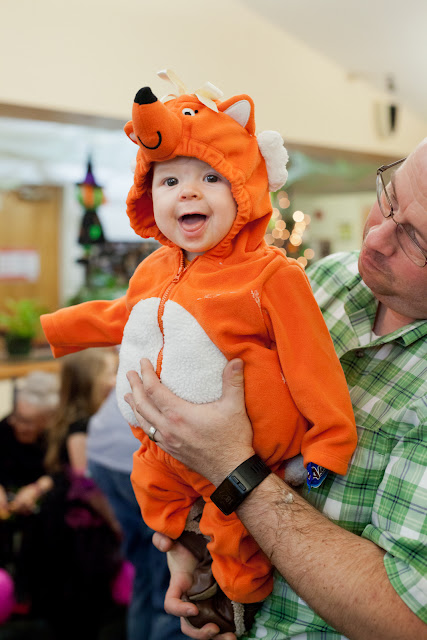 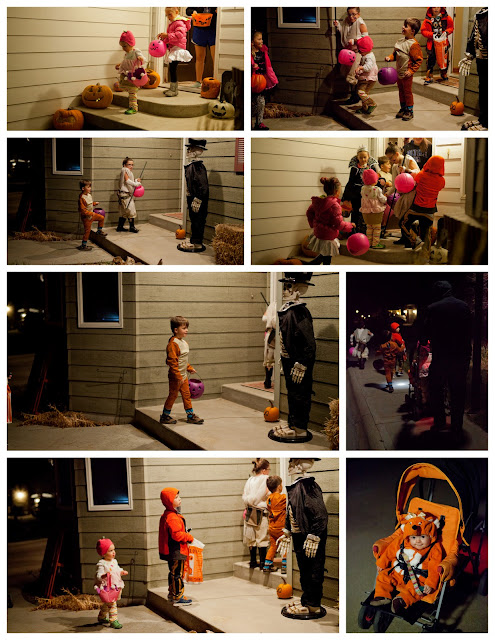 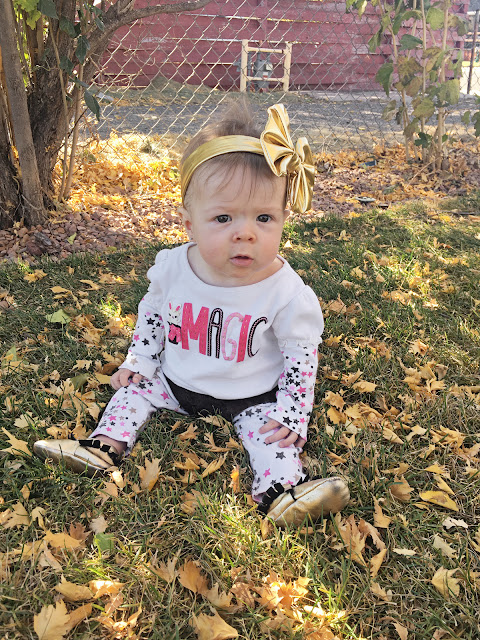 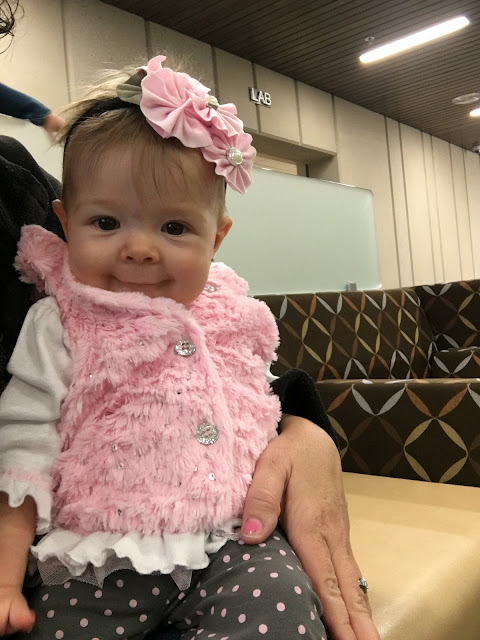 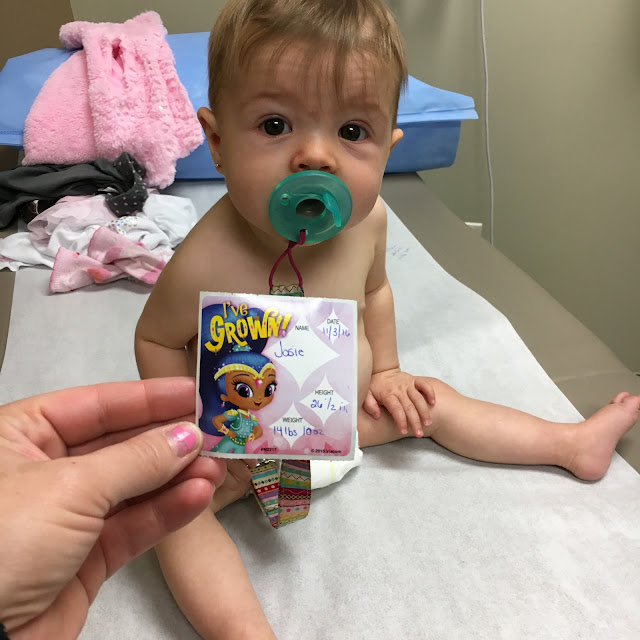 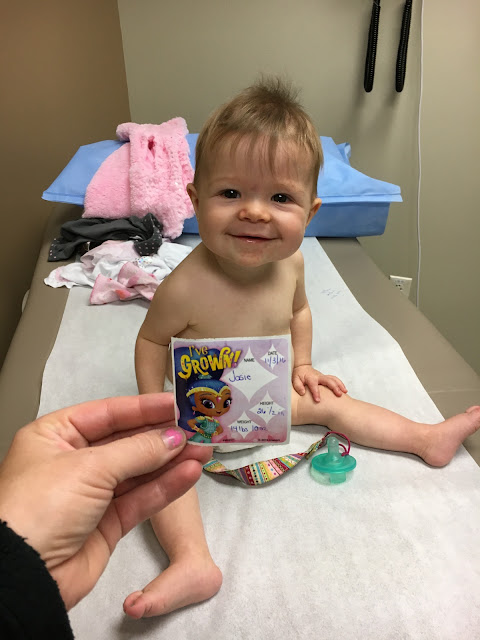 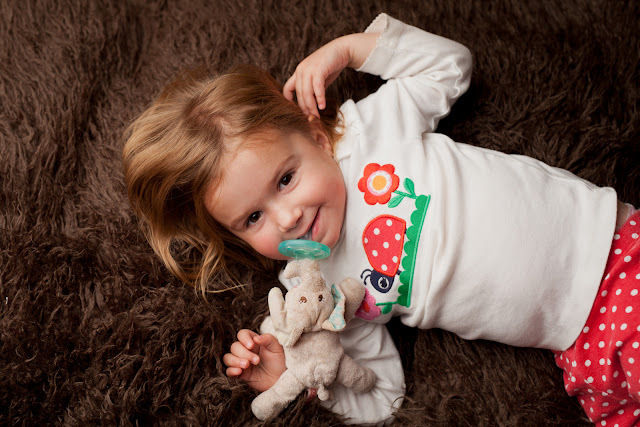 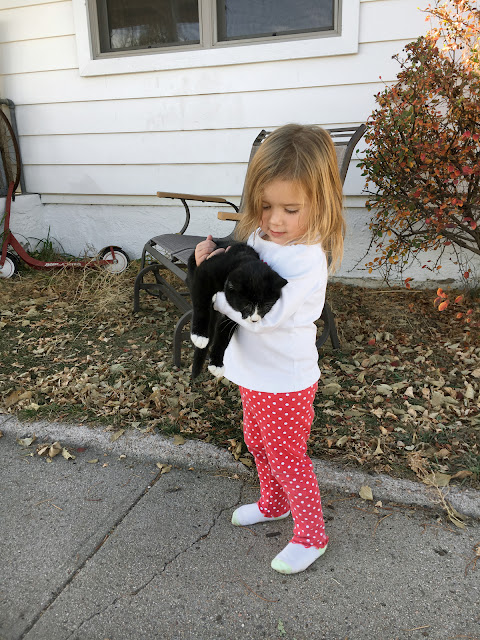 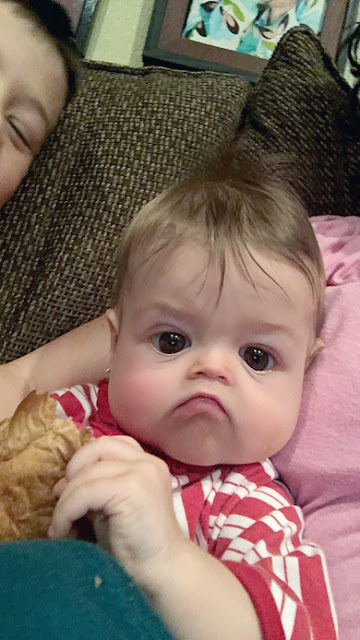 Phillip lost another tooth, the event occurred after dinner on Sunday. He was a total chicken but the tooth was literally barely attached. He finally let me fit floss around it and remove the tooth. It was totally painless and bloodless as well. The tooth fairy hid a dollar under his blanket near the foot of his bed. She is sneaky.

Monday was a bit stressful. I battled the weekly laundry pile. It likes to fight back but don't worry I slam it down every week. I filled up the newly delivered Jump-O -Lene for Evelyn to enjoy while I worked. I got it as a smaller alternative to the huge bounce house. She was in heaven. I think she jumped off and on all day long. By the time the kids came home from school I was ready with costumes for the older kids and Evelyn already dressed up and ready to go. Phillip walked into the door after school with a spider hat on. Evelyn laughed so hard she fell over! Guess the spider hat touched her funny bones. Phillip was late getting home from school because he HAD to walk his two (girl) friends home from the bus. The girls are scared to walk alone so Phillip escorts them with his big muscles and powerful farts (his words not mine). He is a sweet, attentive boy, albeit smelly at times. My yeller was exhausted by the time (4:15) we piled into the van for the city trunk or treat. The thermometer said it was 70 outside, but with the wind and shade we got quite chilled. Poor Evelyn was especially cold. She turned blue like her dress. The kids met quite a few of their classmates and friends at the event. I loved seeing all the folks who keep our city going handing out candy and dressed up to entertain the kids. The police, the firefighters, the librarians, the local shop owners, and city leadership. Something magical about events that bring our city together. The kids scored hot chocolate and cups, gloves, apple balls, toys, and of course candy. Evelyn was not too sure about approaching strangers, she only did it if the person gave her candy. She loves candy. We rushed to the van at 4:55 to run Amelia to piano lessons. While she was in lessons I ran back home to get warmer clothing and coats for the evening trick or treating. The boys struggled into footed PJs then costumes. Evelyn wanted to wear her fleece cupcake costume this time so she got to wear that. Justin met us at home a few minutes before we left to pick up Mia. We grabbed $.50 corn dogs for dinner at Sonic as a post-report card treat. After dinner we let the kids visit the rest home, we love making rounds there to bring a measure of joy to the older folks of our community. Josie charmed the folks with her fox costume and love for standing up tall on Justin's hand. Amelia's hip was hurting already at this point. We let the kids trick or treat down a couple streets. I loved watching Amelia escort Evelyn by the hand up steps and to front doors. She loves her sister (sometimes). At times it was difficult to keep all the kids accounted for. We managed! Everett and Amelia went through the spooky garage with Justin. Phillip refused with all his might to even step foot on the driveway. He was spooked out for a week after watching Scooby Doo. On our drive home Justin stopped so Amelia could visit Mrs Belieu and Mrs Roach. She was toast by the time we got home. After quick baths, hot packs, pain relief, and bed the night came to a swift close.

I made a quick trip to Scottsbluff early on Tuesday. This might have been a tactical error on my part. The drive was fine but the shopping trip at Target with a cranky Evelyn was terrible. She refused to sit in the cart. She can escape from seat belts and climb out of carts so there is no holding her back. Little stinker opened up several tubes of lipstick, piled stuff in the cart, and screamed when I restrained her. She removed her shoes and hid them in a clothes carousel. I found them, she then threw the shoes impressively far and almost hit a lady. Took me 10 minutes to locate her shoes. I went Target shopping to get a cute outfit for myself since we had family photos taken a couple days later. Target actually had affordable clothes in the correct color palette I had to work with. After the shoes both girls filled their diapers at different times. When I finally arrived flustered and flushed to check out the store seemed to sigh in relief. We had a picnic lunch at the park, Evelyn ran in circles for an hour. The kids were suffering from post-Halloween disorder after school. The whining and fighting. Dang. The boys asked to try out the Jump-O-Lene, I told them they could only use it one at a time. Sounded like the kids had a blast playing with the jumper toy, after an hour or more they came upstairs. Evelyn soon came crying upstairs asking for her jumper to get more air. Little stinker boys took a pen and stabbed holes in it then scissors to cut out the balls inside the toy. Together they shredded they 24 hour old toy. I was furious. Furious. Phillip had homework on Halloween, we did not get that done. Right after dinner Phillip had to complete 4 pages of homework, the customary 2 per day is too much for him. Justin called to say he was staying late at work. Josie was super clingy and would not let me put her down. Evelyn was a naked terror wreaking havoc on the house while I helped Phillip with his homework. He finally finished. I rushed the boys to the bathtub to scrub off their sticky faces and hands. Evelyn joined them. Next thing I see is water, water splashed here and there. Water half an inch deep on the floor, the boys and Evelyn creating a water vortex. I am quite proud I kept my cool. The boys sensed my pending explosion and quickly promised to clean up. They emptied the bathroom and wiped the entire room down. I helped them get the stuff back to proper places after they wiped up. I was done, done with the post-Halloween disorder well before bedtime. I went to bed dreaming of punishments for the boys.

Thankfully, the rest of the week was not as terrible as Tuesday. I should have made tacos, for Taco Tuesday. Maybe that would have placated the gods of Terrible Tuesday. Evelyn pushed her stroller with Ellie strapped in the rest of the week to get Everett from school. She insisted on wearing her tutu ballet and slippers all day on Wednesday.

Thursday morning Josie had her 9 month well-baby visit. She weighed 14 lbs 10 oz and measured 26.5 inches long. Dr Shaw prescribed more zantac and prilosec for her, her spitting up is still a problem. She is tiny! We are adding butter to her food now, trying to get her some more weight on those skinny arms and legs. She can roll over now, actually enjoys tummy time for more than a moment! She might actually crawl! Soon after rolling over she moves herself in a circle to get toys. Atta girl. She also learned to chew soft foods, I added soft finger foods to her diet this past week. Right after the Dr the girls and I went food shopping.

I got to hang out with Sheena, her girls, and new baby boy Friday morning. Evelyn was in farm heaven: kittens, dogs, and friends to play with. She spent most of the 3 hours we were there outside with the cats. I took photos of new baby Noah. He is quite long so posing him was a challenge! We got home just in time to pick up Everett from school. I was beat down tired!

Saturday was our RS Super Saturday. Josie and I went around 11:30 am to work on my crafts and enjoy lunch. I only signed up for two easy crafts! Lunch consisted of a delicious salad made by the salad maker Mrs Elaine Peters. She makes the best salads ever. Right after lunch I left and headed home. I rushed around getting the kids and myself ready for family photos. Justin was still in bed napping 5 minutes before we were due to leave. I was a bit steamed, gah. He said last time I confirmed a time it was set for 4:30 and not 3:30. I moved it to accommodate another activity we had going on at 5 pm. My photog friend Candice snapped our photos for us. I was not impressed that she did not take control and try to capture my kids attention. I ended up looking crazy as I tried to manage the kids and look pretty. After reviewing the photos a few days later over 80% of the photos were out of focus. Gadzooks! Needless to say I felt trampled on and exhausted. Well, at least the photos are real us and real life. I hope to cobble something together that will work for a Christmas Card. The Bishopric hosted a dinner for the ward counsel at 5. Josie was still quite crabby so she came along for the evening. The rest of the kids stayed at home with a sitter. Josie chewed up a dinner roll, kept her entertained and delighted. Dinner was over the top delicious, smoked pork loin, dutch oven potatoes, veggies, and rolls.

Posted by Jenni Call at 11:49 AM 0 Stupendous Remarks