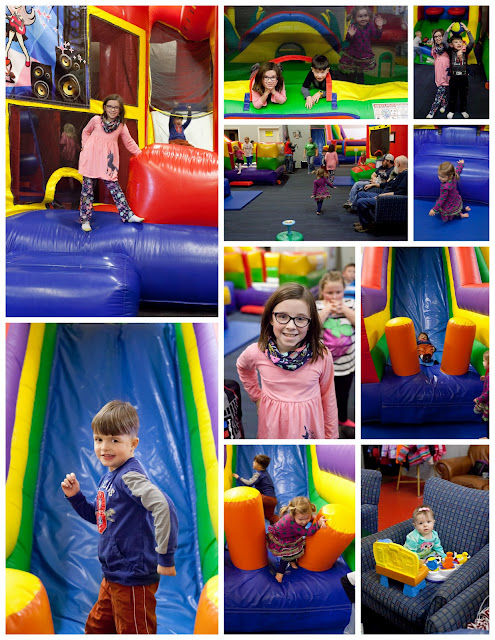 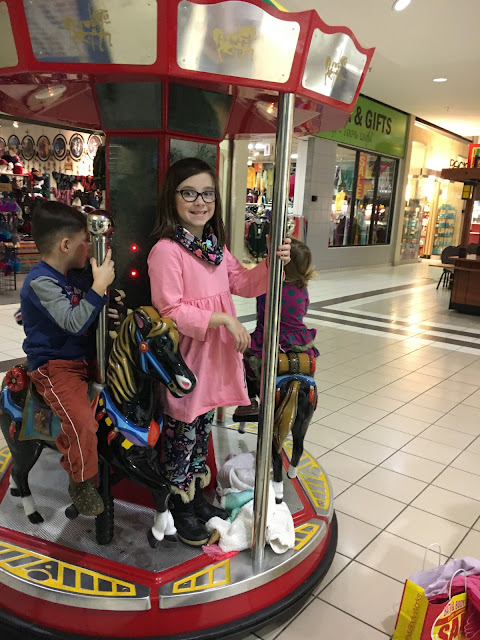 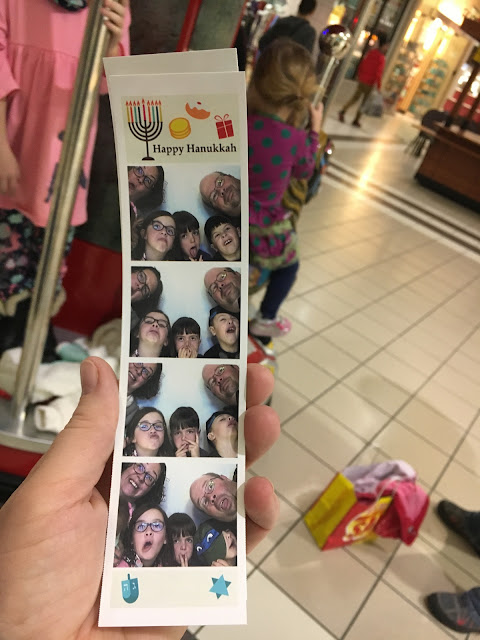 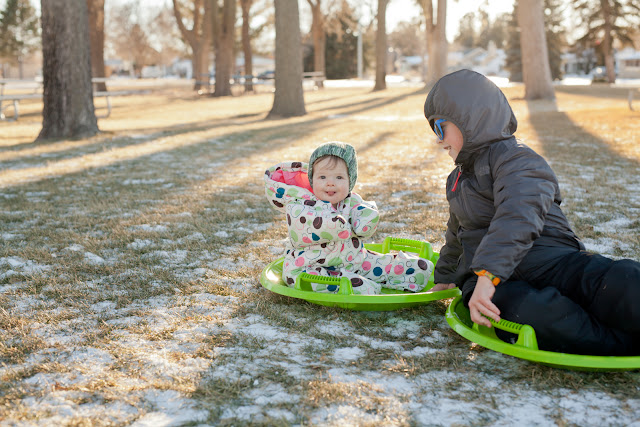 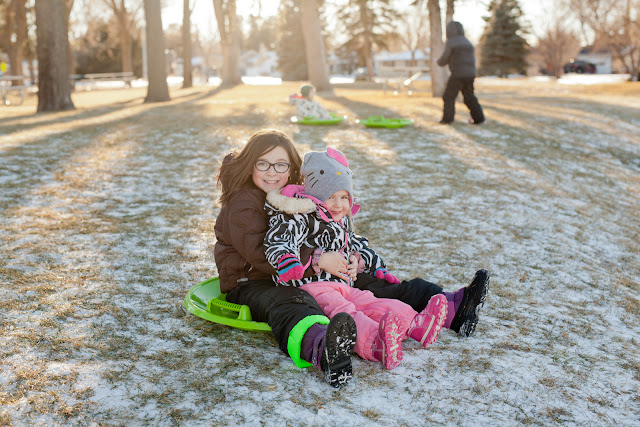 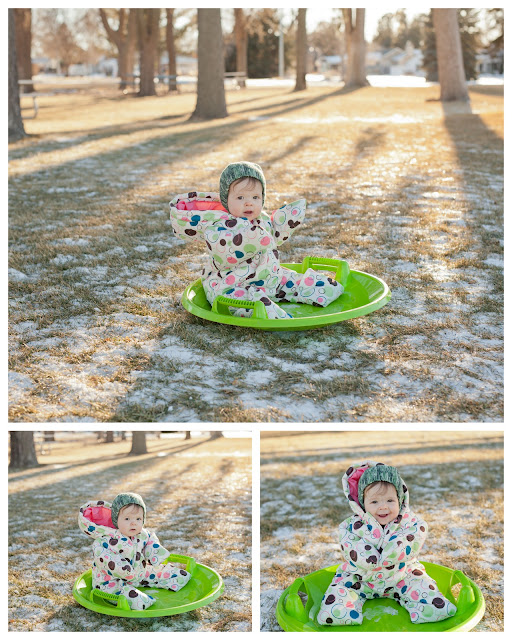 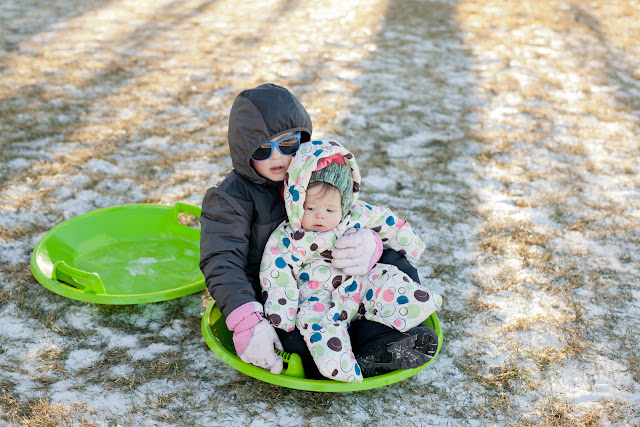 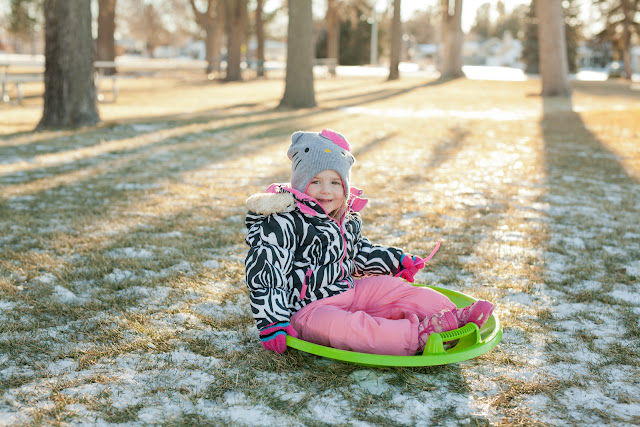 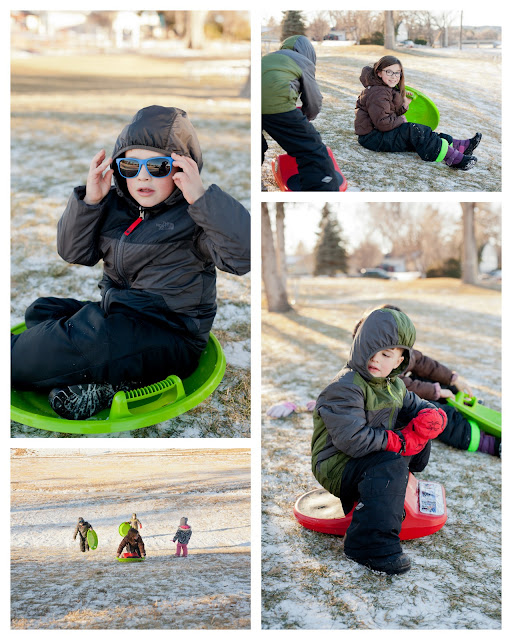 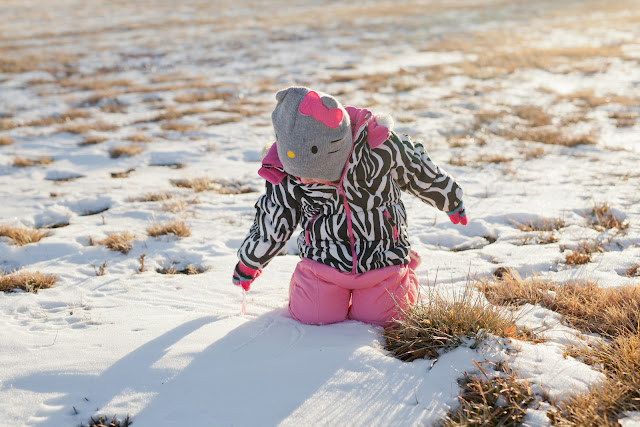 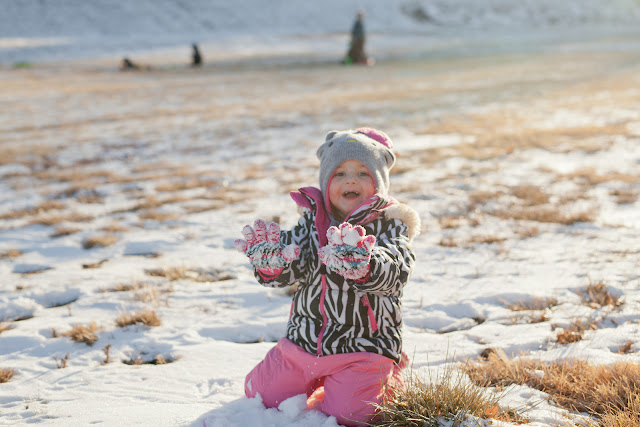 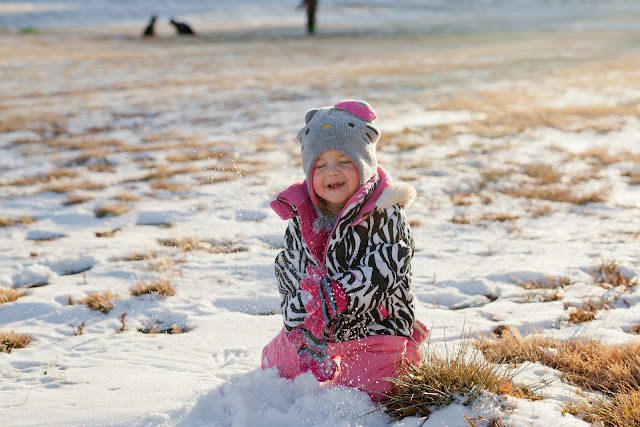 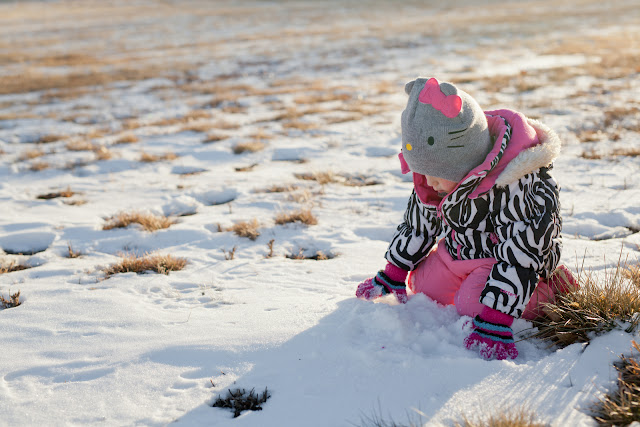 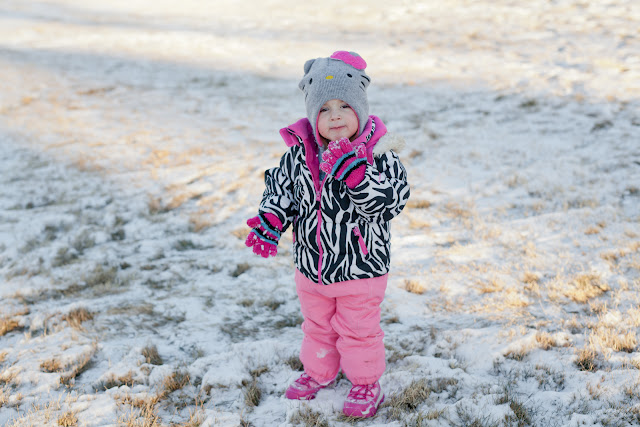 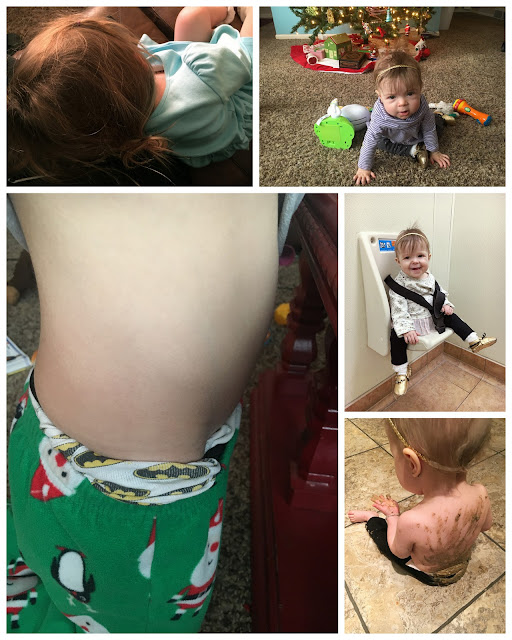 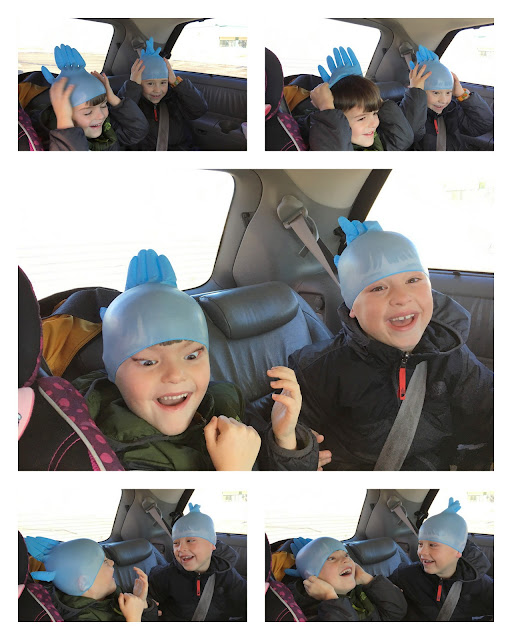 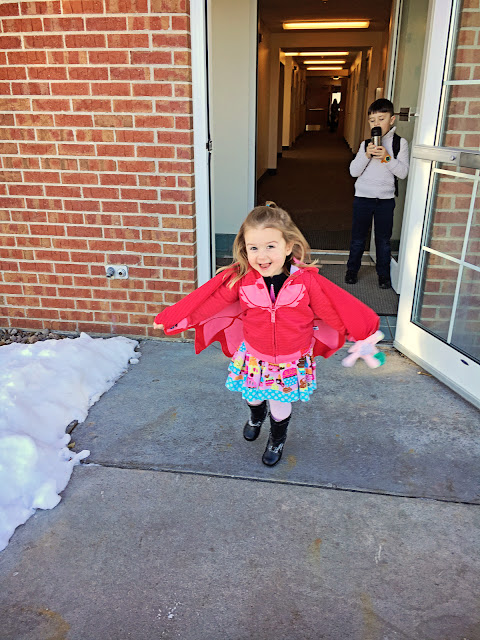 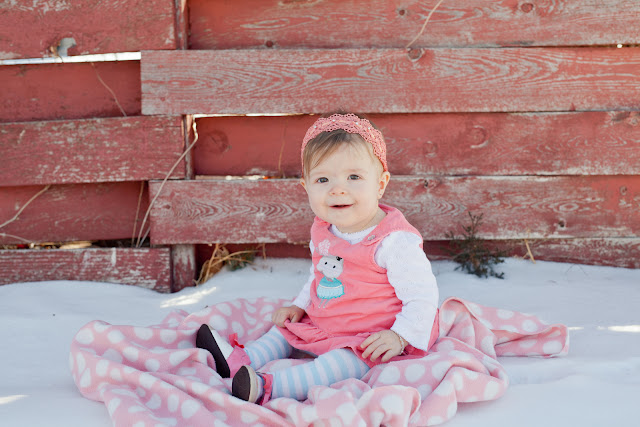 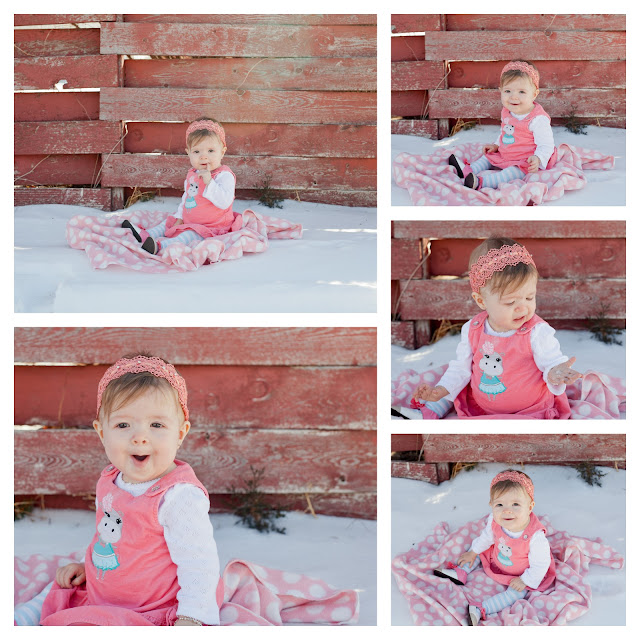 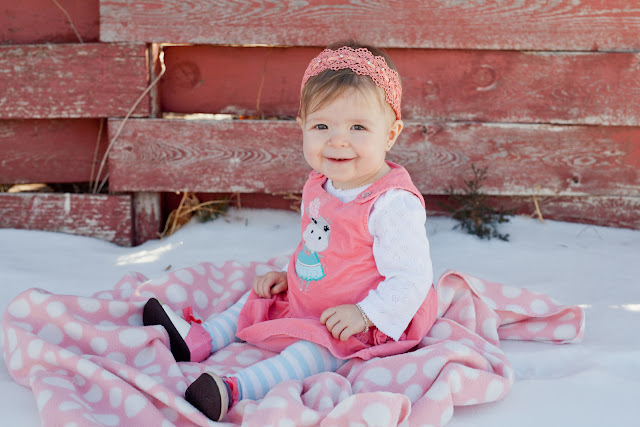 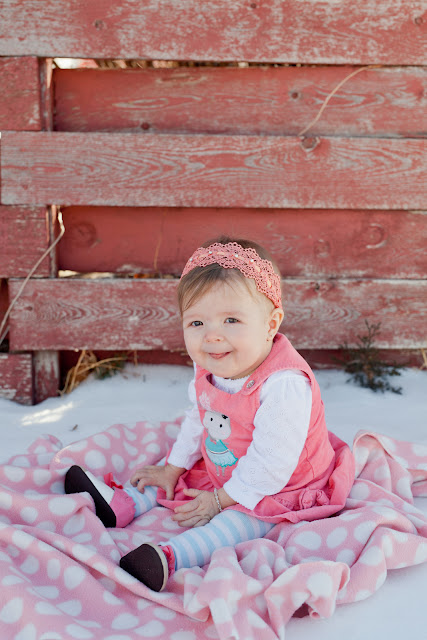 Justin stayed home this week from work. It was so relaxing to have him around, we all got more naps than usual. Pretty boring. He is really talented at motivating the kids to clean up and go play outside. He had the kids outside making an ice fort one day. Each day the kids went out with him to chip ice off the sidewalks and enjoy the sunshine. I took the kids sledding down the banks at the park. There was barely enough snow, thankfully, the grass was almost frozen so the sleds still went down at a decent clip. The kids loved the sled Jen handed down to up, a zipfy, that sled really goes fast. Evelyn was not so keen over sledding down a hill with brown grass poking through. Instead she had fun breaking up the ice in the gully. She also found a broken piece of pink plastic, she used it to poke the ice and make sweet footprints. Josie and Evelyn were done sledding after 30 minutes. I left the older kids at the park to run home and put Josie down for a nap. Justin was helping a family move so he went to the park soon after I left. Nothing better than an afternoon of fun in the snow!

Monday and Tuesday felt like extensions of Christmas Day. We basked in the aftermath of Christmas chaos for a couple days. I finally had enough and cleaned up the main living spaces a bit. We put the first batch of rocks into the new rock tumbler. I am excited to see the results...in a month.

Wednesday we drove out to Cheyenne for a day away from our mess. I heard of a newer facility with bounce houses we wanted to try out. For $20 the kids bounced to their heart's content for 3 hours. We'd catch a grinning face speed by every so often. A couple times Everett got hurt but he was letting other kids take advantage. Once the kids started whining we left to go check out the mall. There is a small play area there. Justin and I took turns sitting with the kids to check out Bath and Body and other stores nearby. The kids were quite excited to visit the pet shop. Amelia fell in love with a cute 10 wk old puppy. Cute, but no thanks. Phillip and Everett wanted to try out a photo booth so we crammed into one. The selection buttons were jammed so we automatically won a photo strip with Happy Hanukkah decorations. Evelyn was more than pleased to ride the carousel. We dined on the best pizza this side of the Rocky's for dinner. How an Italian guy ended up in Cheyenne is a pleasant mystery.

We all had dental cleanings Thursday! Justin went early in the morning by himself. I took the older 3 and myself at 1 pm. Justin dropped by Josie and Evelyn on his way to help a new family move some belongings. All the kid's teeth look great. I have terrible tooth luck, me...the one who flosses 3-4 times each day and brushes after every meal. So not fair. Grandpa Baerwaldt gave me his terrible teeth gene. I get to return next week for a small filling in my back left molar. I felt clever tricking Dr Shaw during an appointment for medication refills. She asked the reason for my visit, I said, "well I might need a pregnancy test." Her face betrayed her. I rolled on the floor laughing. Unbeknownst to me her nurses played the same trick on her earlier that morning as the reviewed her morning schedule of patients.

Friday Justin and I celebrated our 12th wedding anniversary! YAY! We went out for dinner at Sam and Louie's. Justin bought me another pair of boots, snow boots this time, instead of flowers. Lucky me! The last time I bought snow boots was a week or so before we moved to Sidney. I am excited over all the boots I have now: ankle boots, brown furry knee boots, black knee boots, Sperry calf boots, and now new Columbia snow boots. I wear a lot of leggings, so the boots go well. I wear leggings with too-nics, makes me laugh to say too-nics. Good gracious I must be a stay-at-home mom. Justin celebrated our anniversary with multiple naps, I tried hard not to get too steamed. The boots and pizza helped and the vacation from the kids for a few hours.

The boys made us all laugh hysterically when they shoved blue medical gloves over their heads. I about died laughing. Everett looked like an exotic Asian with his eyes all stretched back. Amelia was in a foul mood, nothing was going to make her smile. She grimaced over their antics while the rest of us enjoyed soul food. She had a conniption fit over lunch at Sonic (we were really bored, so eating out is an easy, short outing). After eating a couple bites of her lunch she turned back into a normal girl. She and I went grocery shopping after lunch. The one-on-one time helped turn her attitude as well. She was a huge help fetching items and loading up the conveyor belt at check out. She had a 6 hour playdate with Avery Hill the day before. Maybe she just had too much fun. The girls spent most of their time in Amelia's room making Lego videos and other mysterious things almost 10 year old girls do. We learned the Hill family is moving to Omaha soon. Brother Hill is leaving in a couple weeks, the family will follow in March. So sad, so so sad. We celebrated New Years Eve with a huge bowl of fresh shrimp salsa, chips, and dips. That was dinner and snack. Amelia and I played Scrabble for the first time together. She played relatively well on her own once she understood how the game is played. We were adventurous and let the kids stay up until 9 pm. Yah, rebels. Justin had a nasty sinus blockage that kept him up the previous night, he went to bed soon after.

Evelyn is now a Sunbeam. She showed up to church in style wearing an owlette hoodie. She only went to singing time this week and for the next couple weeks until a new teacher can be secured. Phillip thanked HF in his prayer that he got to see Evelyn in Primary. That was so sweet. Josie had a massive poo-cident this week. Clear up to her neck. She started sticking out her tongue this week, a dainty, tiny tongue barely peeking out. We are quite amused with her apparent attempts to mimic what we say. Her attempts sound like growls and reflections of the sounds we make. She tried to tell Vader to "Stop IT!" last night.