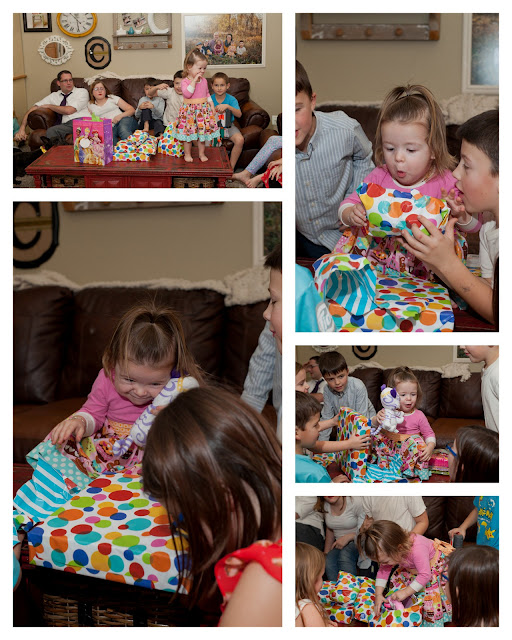 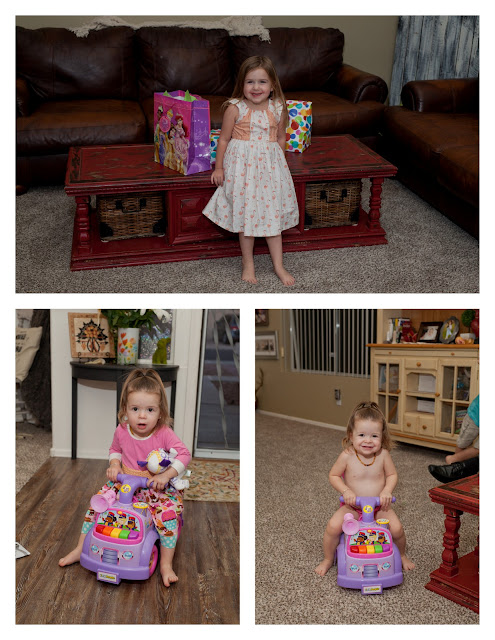 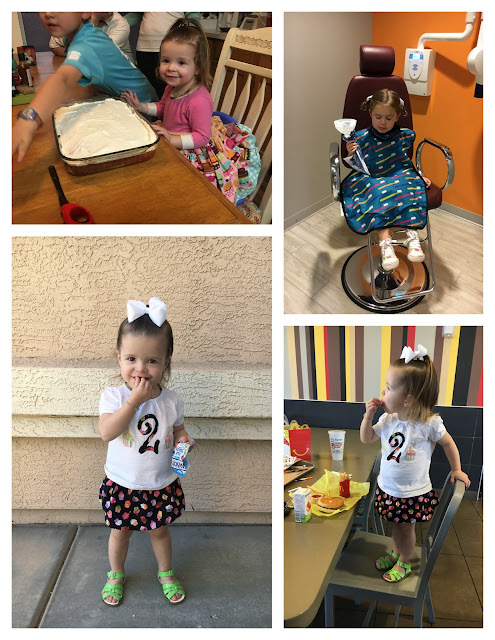 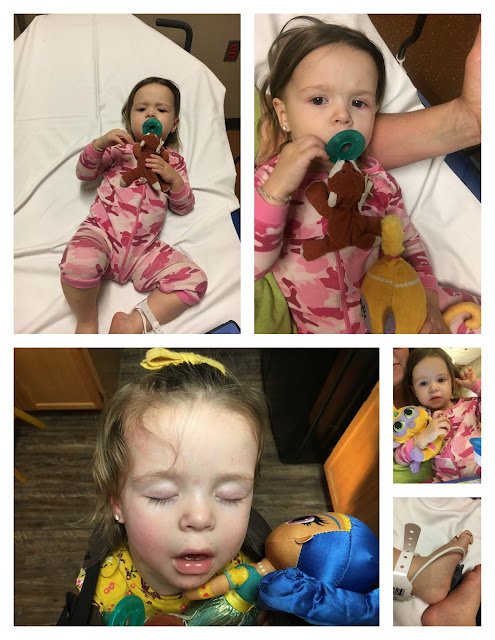 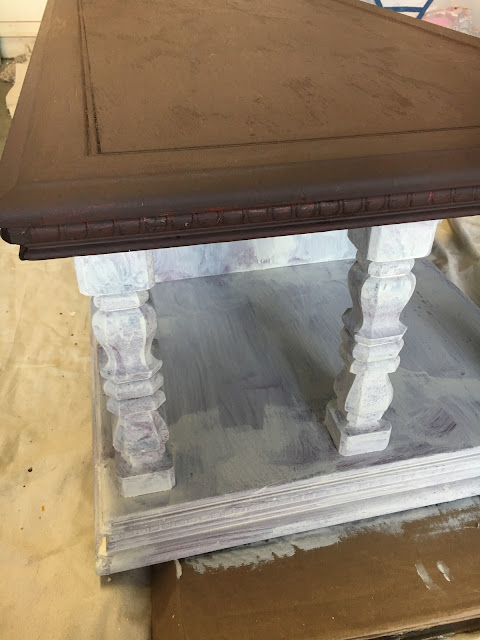 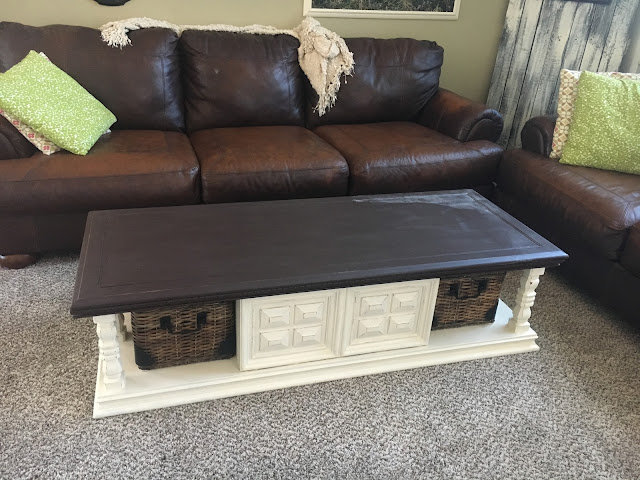 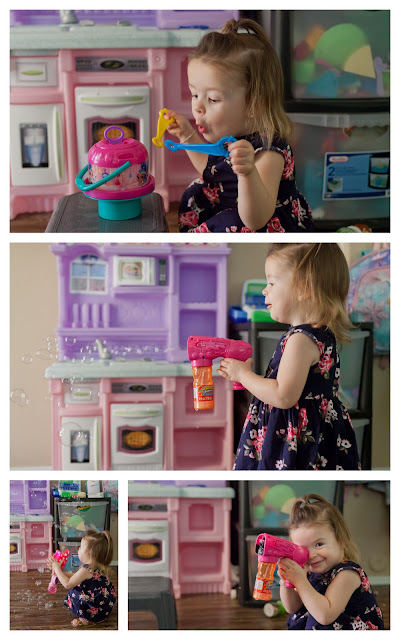 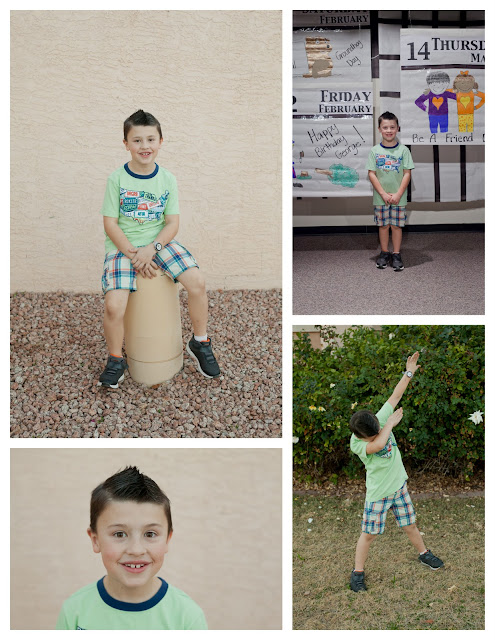 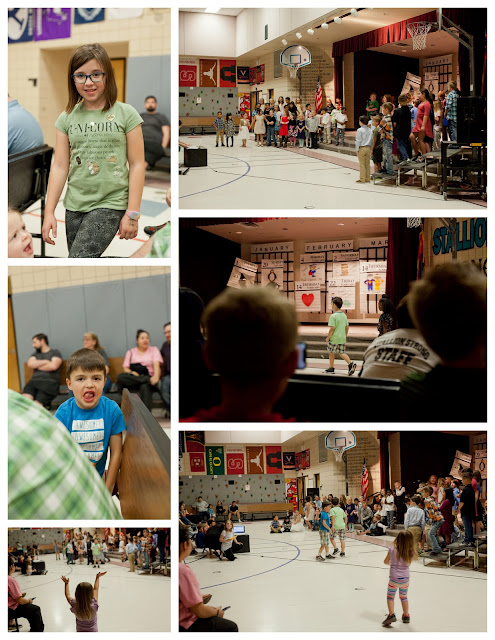 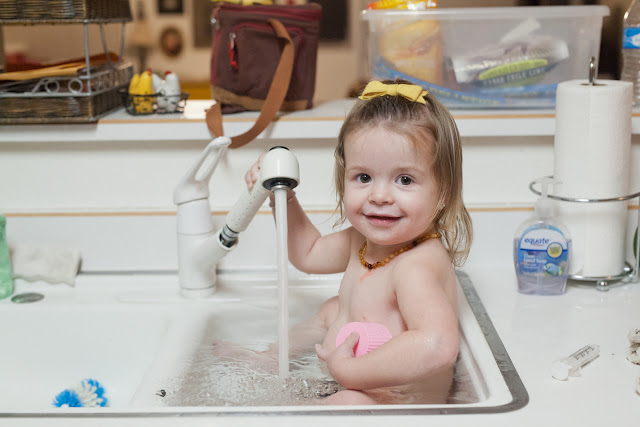 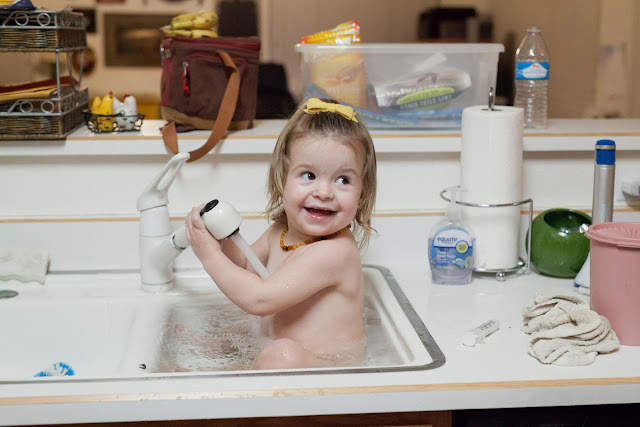 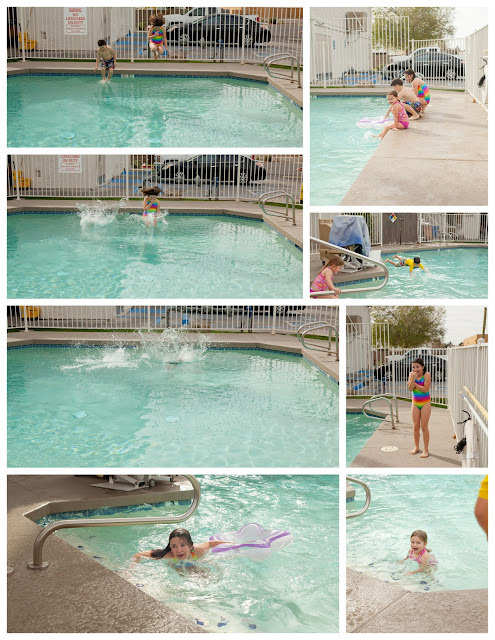 We all have a hard time believing that Josie is now two. She is turning into the funniest little monkey ever. Tonight we took the kids to a store and she went wandering around gasping in delight over each new item. Her new talent is blowing bubbles! Those pursed lips slay me. She is advancing her speech practically each day. Next week is her well-child so I'll include more details at that time. As pictured above we celebrated her birthday on Sunday with our cousins. They came over for dinner and strawberry jello cake. Josie got lots of bubbles, a Nahal plush (Shimmer and Shine character), an ABC toy, a Minnie Mouse phone, and a sit on toy. She was quite excited over the Nahal toy, she showed it to Mia saying, "Ahhhhhhh?!" while showing it to Mia. Course the best way to ride a toy is half-naked. She is entering the stage of hating clothes.

I went to a school supply store to laminate some items for singing time. As soon as we walked in Evelyn exclaimed, "I hate this store, there is too many papers and pencils here!" The cashier was cracking up. Our FHE on Monday was a notable one. Justin gave a lesson on the importance of making a house into a home. He then dedicated our house into a safe haven of a home. Amelia, Phillip, and Everett all had teary eyes and tender hearts. The experience was special for all of us, one I've been waiting for, that night seemed the perfect night. Amelia hosted a dance party and I made smoothies.

The kids are all busy making Valentines for their classmates. Evelyn and Everett are probably the most excited. At school the kids could buy monkeys to give to siblings, parents, or classmates. Amelia bought 5 monkeys! Everett, our money conscious man, spent $2 on a monkey for a classmate who moved back into the school after being gone a couple months. Phillip, not sure how many he purchased, maybe 4? They worked hard to earn the spending money. Evelyn asks each morning if that new day is Valentines. "I so 'cited for Balentines! I love my friends and Mrs Melichard!"

Evelyn had to go back to the dentist for a tooth cleaning and check up. That girl went in kicking and screaming bloody murder. She screamed until we got to the booth. She screamed when the hygienist entered. She stopped screaming when the hygienist offered to just brush her teeth with a princess brush and special pink toothpaste. She did a great job with her x-rays! She started screaming again when the dentist came in to check her teeth. Fortunately she calmed down long enough to let him examine her back molars. I was sweating bullets before the appointment was over. Wrestling a 4 year old is a bit more detailed than wrestling a 2 year old. Josie looked so sweet wearing her "I'm Two" shirt. We celebrated with lunch at a fun new McDonald's a bit further away from our house. The girls were in heaven playing for over an hour. The rest of her birthday was spent napping then homework time and then dinner. Right before I took Phillip to Scouts, Evelyn came running in to tell me Josie was drinking Phillip's medication. I found her with the bottle and the stopper uncorked. It was hard to tell if any was missing. She seemed ok so we went on our merry way. After dinner she became really clingy and agitated. I forgot about the medication until Justin mentioned that she seemed to have strange tics going on. I called poison control who advised me to take her to the ER ASAP since the medication is a controlled substance and the amount she ingested was unknown. I missed our Sidney ER right about the time we walked in to a full ER waiting room. Took 2 hours just to get in a room, another 2 before they let us go. While in the waiting room Josie barfed all over me three times. I scored a couple barf bags to minimize further incidents, which amounted to 7 more episodes. We both smelled terrible and felt terrible waiting with all the other people suffering from flu, valley fever, and other unknown sicknesses. Pretty much treatment included waiting in a room with a barfing baby until she could keep down a couple ounces of juice. I got a lecture about securing medications better and to be mindful of my children. (duh!). Seems that she drank about 15 ml of an Amphetamine, so had all the signs of a druggie on a high. First rubbing alcohol (Phillip) then amphetamines! At least we are moving between drug classes. What a way to end a birthday. The next day Josie was a mess, she cried and whined most of the day. She ended up napping in the front carrier for a good 45 minutes while I made dinner.

I found another clinic that focuses on hormones and such in women. I met with one of the owners just to find out more about the clinic. I felt better about this clinic than the Red River one, plus the price was much lower than the former. A woman medical doctor does all regulation of thyroid and blood work, I'll meet with her next week. They took a new blood sample since I stopped taking synthroid a couple months back. She also requested I stop taking birth control since they cannot test my levels and get an accurate reading of my levels. I am going to try these folks out. Hoping for better answers this time. Mom sent me a thorough family medical history to which I will add my own notes. Dad advised me to be more proactive in getting what I need since most doctors are no longer curious about finding the right answers. I went to the clinic in a complete brain fog since our ER experience got us home after 2 am. Amelia had an orthodontist appointment down in Chandler. The orthodontist said her lower four molars all need to be pulled out since the adult molars are not moving. She was tasked with wiggling and getting her top molars loose. They will also pull her baby incisor, seems her adult incisor was coming in wonky and would never push out that tooth. They are hoping once the tooth is pulled the adult tooth might come down where it should. With our Amelia luck she will need surgery to pull back her gum, attach a wire to that tooth and pull it down to the correct position. Bam, there goes another nest egg of money! Grandpa Lance came down for a quickly planned visit. He came down to talk with a former buddy about a potential job. He drove for 12 hours to get here! We arrived back home from the ortho moments before he arrived. The kids had time to scrawl "Welcome Grampa" on the driveway! Dad arrived before he collapsed with a nasty flu, influenza B to be precise. He was not feeling well at all but was not running a fever. He tried to keep up with the pack of kids! He went to bed shortly after dinner. Next day he check out of Amelia's room and checked into a dumpy Hotel 6 in Mesa. He went to an instacare and got the flu verified and maybe a dose of tamiflu. He holed up in the motel for Thursday-Sunday feeling like death warmed over. That was a strange experience for me as well, knowing your own father is a few miles away convalescing with the flu. He refused any contact and pretty much quarantined himself. The kids were quite disappointed. I was quite upset since this was my first ever visit from my Dad!

Thursday evening the second grade put on a show for all their parents. Earlier in the day Phillip performed for the school. He came home and picked out an outfit to wear for his concert. I asked why he did not wear his suit, he replied, "I'm afraid I'll ruin my suit with my muscles when I flex them during the concert." He selected a stretchy shirt! Ha ha ha ha. We ate a quick dinner of leftovers and rushed to his school. He came out beaming from ear to ear! The concert was based on the months and holidays between January and March. His favorite song was Pizza-Pizza-Daddy-O. He practiced his deep, loud version of his voice so everyone could hear him! We could hear him alright! I am so proud of his speaking part, he had it memorized and delivered perfectly. Do you ever look at your kids and think, "Wow, that is a good kid?" I sure did. He is funny, smart, kind, and caring. After Phillip's concert Everett ran up before the show actually ended and the boys gave each other a huge hug! Josie loved all the music, she entertained us with her cute little dance moves. The music teacher instructed all the parents to take her students out for ice cream after the show because they worked so hard! We obliged and got cones at McDonalds. Yum.

Saturday clean up was miserable. Just miserable. All our tempers were high, especially Justin and Amelia. Those two can clash hard and long. Everett was the star of the show, probably because he could feel the volcano about to erupt. Phillip is so clueless he kept ignoring Justin which makes him madder than a hornet. Amelia just whines: "why? why do I have to clean? I did not make the mess." After the house and backyard were more acceptable I gathered the family into the family room. We cannot continue to have such disastrous family cleaning sessions. It brings a terrible feeling of discord and anger into our house. Amelia spent half the time sobbing in her room or yelling at everyone, that is no way to clean up. We developed a better cleaning strategy together, make a list of duties in a given room and then make assignments. We are going to try out the room-by-room approach instead of assigning a kid a room or task alone. Imagine a cleaning task force ripping through rooms cleaning as a team. Yes! Now I need to make a visual we can follow. During naptime Justin stayed at home to work on his talk and be home with Josie. The older kids and I went to spend some time with Grandpa Lane at his hotel. What better way than to swim in the middle of winter?! The water was frigid! Brrrr! Still the kids jumped right in, never saw Amelia swim so fast in her life. Dad and I talked about working with doctors as I work on solving my energy issues. He suggested a detailed medical notebook I can use to keep myself and the doctors current.

Sunday Dad checked out of his hotel and came back to our home. His fever was gone, but he was left with a tired body. Justin gave an excellent talk on Reverence During Sacrament Meeting. I sent him home afterward with a coughing Evelyn and snotty nosed Josie. I really thought Evelyn caught Dad's flu. Turns out she just had a viral cough and no flu. Dad and I had several nice talks about Heartland theory, President Trump, education, LGBQ and school, and electronic devices. Lots of food for thought. I ran out of lettuce (rather the head I had in the fridge was frozen solid) for our Bulgogi dinner, had to improvise with loose spring mix, made for tiny Korean tacos. The kids rather liked the size.