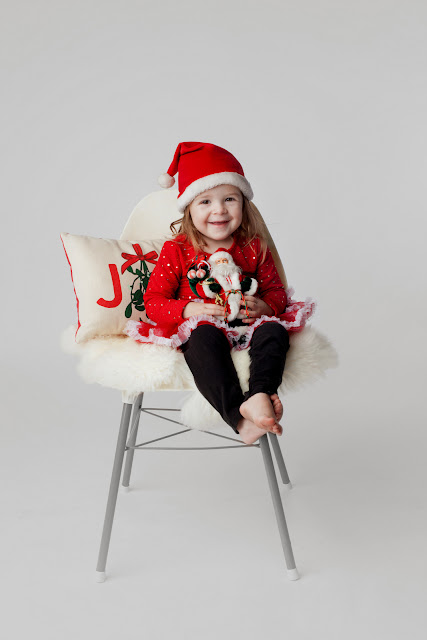 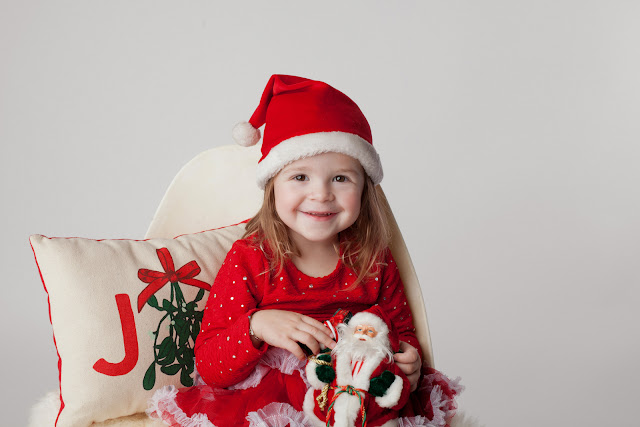 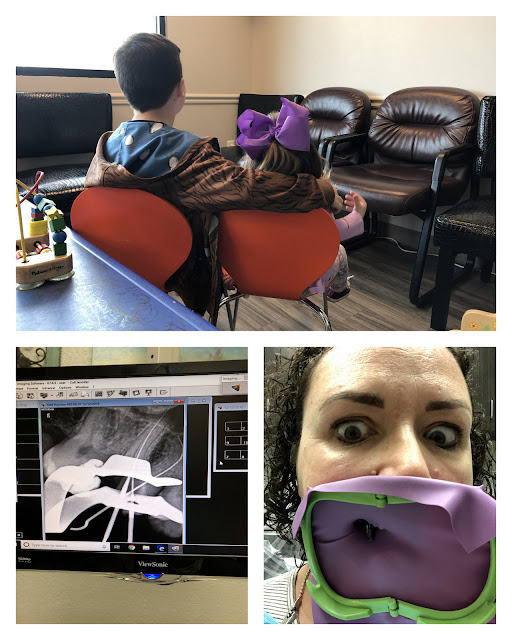 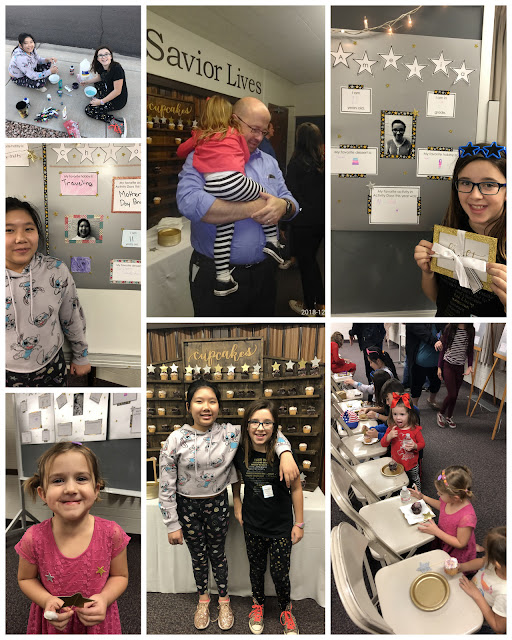 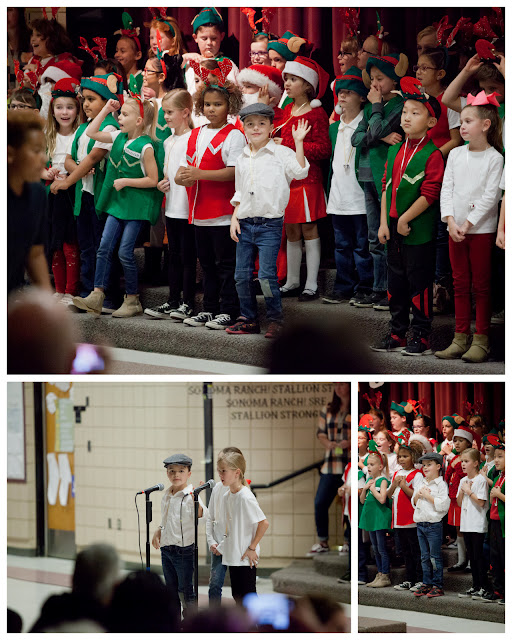 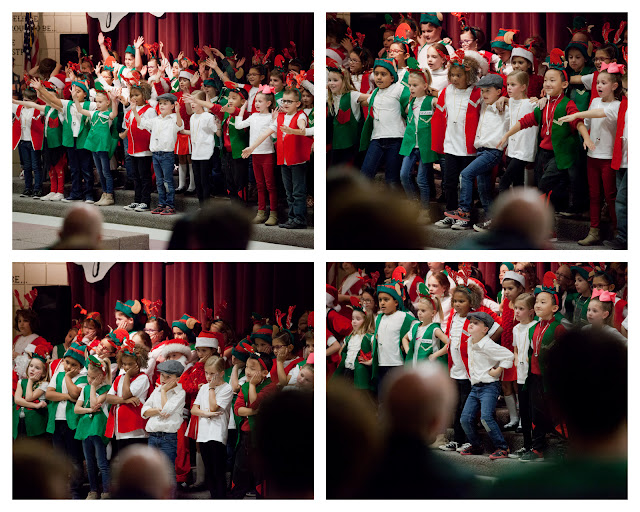 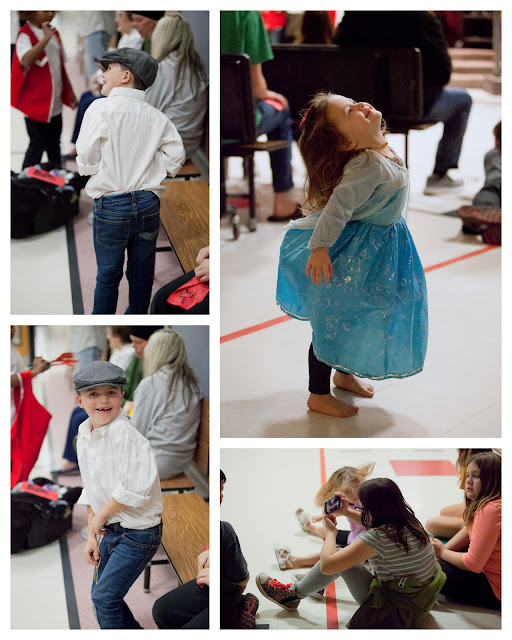 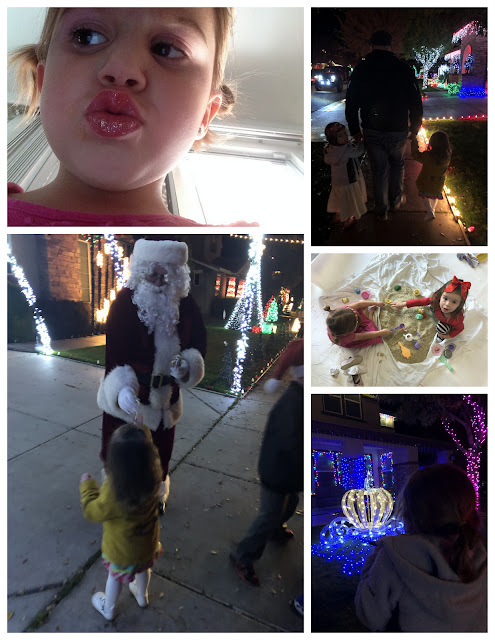 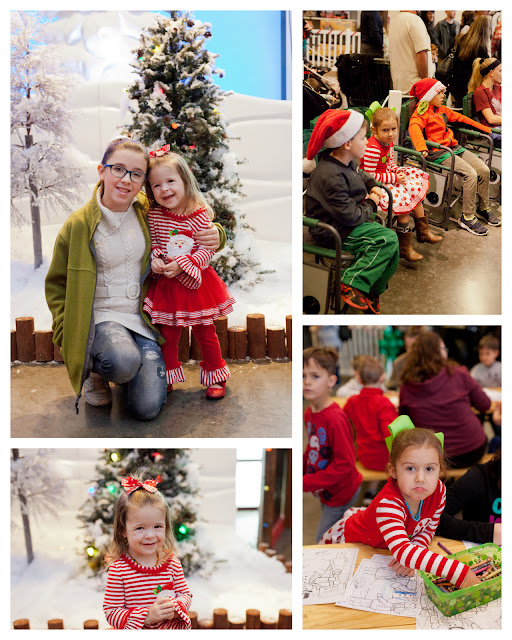 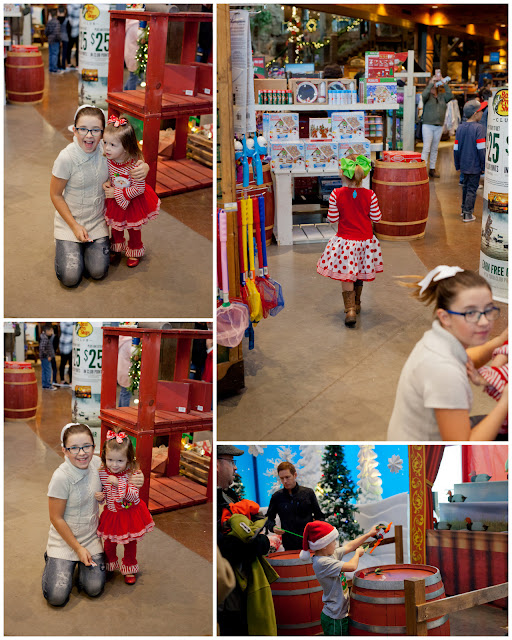 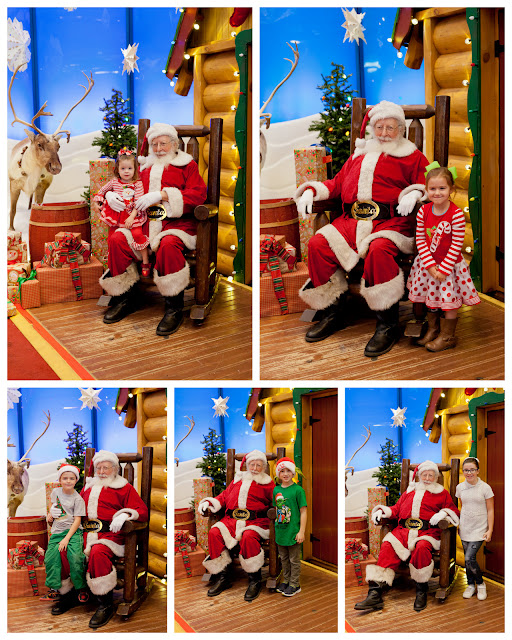 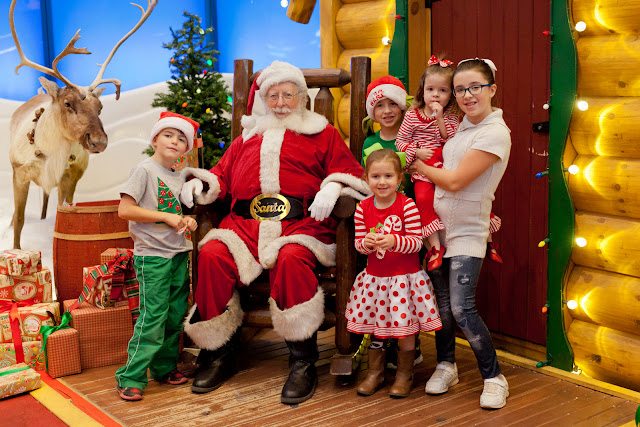 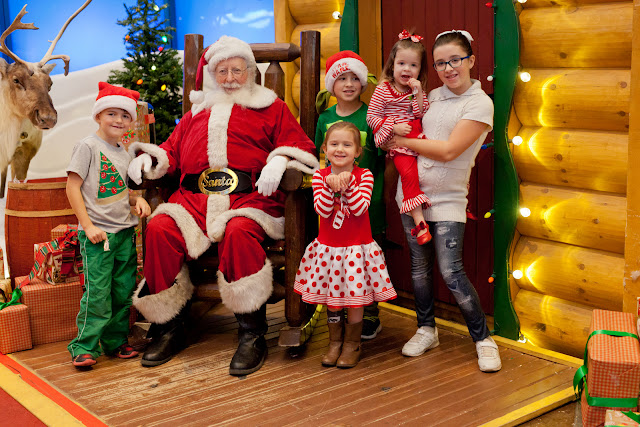 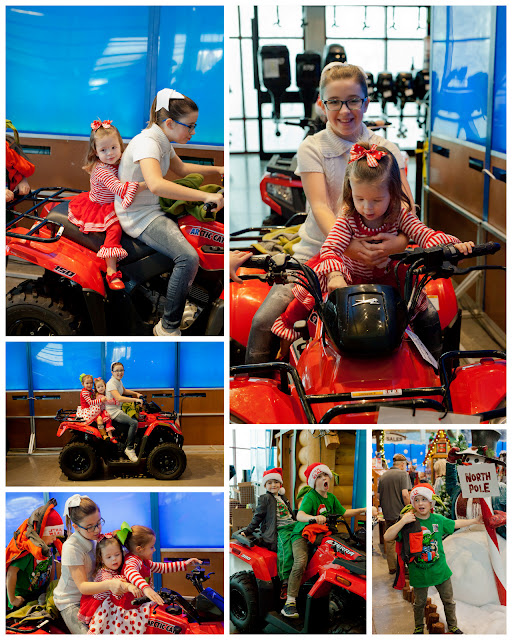 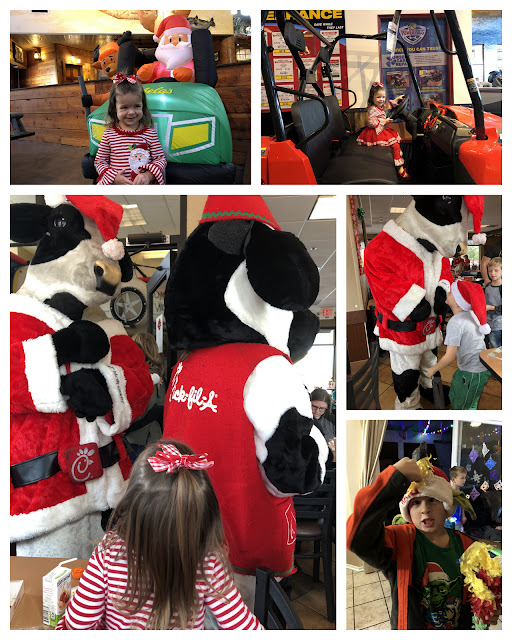 What a fun week! We filled our week with a performance, Christmas mini sessions, doctor/dental visits, and topped it off with a visit to Bass Pro. I love the busy season this time of year provides. I seem to perform better under pressure.

We enjoyed a fun visit to Christmas on Comstock St, a street all decorated up with lights and a radio station with coordinated light shows. Josie quite enjoyed sitting on my lap while we drove down that street. For the next two days she cried every time we got in the car, wanting Mommy's lap. We parked the van after driving the street and took a turn walking down the same street. Santa was handing out high fives and candy canes! Josie was quite keen to give Santa five, Evelyn stayed 10 feet away. We headed back home because Phillip had to use the restroom. We arrived home to find several police cars lighting up our quiet street. A very young man was being arrested as we pulled in, sad day for him. Turns out he assaulted his mother after she would not let him leave with her car.

Everett had a fun unit last week on recycling. He is intent on making a compost pile for us. Each morning he takes the egg shells from breakfast and buries them in the garden! I think he would be delighted if we brought home a composting box with worms. Everett also lost another tooth after several days of dedicated wiggling. His teeth are quite endearing right now with one front took fully grown and the other barely peeking out of his gums. He rocks the snaggle tooth look!

This week I picked up my new c-pap machine. Trying on masks in front of the medical supply worker was one of the more uncomfortable experiences of my life. I'd rather give birth than have an elephant nose mask on my face in front of a stranger. I rip off the dang mask most nights in my sleep. Opening your mouth while running the machine is a very strange experience. I often imagine the scene from "The Mummy" when the dead pharaoh opens his mouth and spews a torrent of insects out of his mouth. Gaaaaaahhhhhhhhhhhhhhhhh! As imagined getting up and down with kids and a mask is also not fun. I wake up feeling starved for a normal breath. I suppose it gets better. I went to an ENT just to ensure my nose is not a problem. Looks like my nose is not deviated, my stuffed right nostril issues is probably due to ongoing allergies and sinus problems. I took Phillip to the ENT since his left ear tube needed extraction. It's possible he will need tubes again, the ear drum that gave him all those issues over the summer had lots of pressure built up behind the ear drum.

Wednesday I had a root canal on my top right molar. Two hours of keeping my mouth open felt like torture. If you can imagine the impossible, I actually fell asleep while the dentist was filing away at my canals. It was boring so I fell asleep, not the best cat nap I've ever nabbed, but hey I was without kids for a couple hours. The worst was getting the x-rays. I have the worst gag reflex after so many bad pregnancies with morning sickness. I cannot tolerate stuff in my mouth for more than a few seconds. I go back on Monday for a second root canal on my bottom left molar and to get a new crown on the top. I left with a raging headache. I thought my face would be sore for days but the next morning I felt right as rain, just a little muscle soreness in my jaw.

Amelia and Chloe had a fun Activity Days celebration. Each girl had a poster with several things about themselves and a photo. The theme was "I am like a star." Amelia has a fun group of friends right now at church. I am happy she is sharing her beliefs with Chloe. I'm not sure what Chloe thinks about it all but we'll include her as long as she desires. The girls spent their time after school making loads of slime to give as Christmas gifts for their friends. I finally got the garage cleaned up after three days of taking studio photos in the garage. I quite enjoyed the Christmas sets this year.

Everett gave quite the amazing performance with his 2nd grade mates on Thursday. He is so animated and gregarious. My favorite was how loud and off-key he sang all the songs! He practiced for weeks at home singing the songs (quite off-tune with all the hand signs) and working on his speaking part. At one point he turned around to boss around his classmates who were not paying attention. Love that kid! Josie insisted she wear her pink tutu and Elsa dress to the event. Somehow in the chaos of leaving I forgot her shoes. At least I remembered the kid and forgot the shoes, not the other way around. I left from the school and attended a fun RS progressive dinner. I missed the appetizer house at the Barlows but arrived in time for the main meal at the Smiths and dessert at the Paynes. It was all quite fancy and well done! I loved the messages shared that evening. We enjoyed fancy hot chocolate and desserts outside around several fire pits! I convinced Sarah Burton to come with her little son. He ended up the only little one in attendance. Ah well, we'd rather have her and the baby than no Sarah.

Friday was spent up to my elbows in flour, sugar, butter, eggs, chocolate and almond extract. Christmas cookies for the WIN! This year Debbie Goddard and I teamed up to hand out Christmas cookie plates instead of doughnuts. We wanted to spread some cheer with Christmas caroling and treats. I made several dozens each of chocolate crinkles, cherry shortbread, and spritz cookies. Debbie made cake balls, pumpkin rolls, and rice crispy treats. I always get nervous making the cherry shortbread because the dough is quite dry, only butter and drained cherries to moisten the flour. The amount of gentle kneading makes me nervous about a resultant tough cookie. Somehow, yes, somehow I forgot to add sugar to the flour at the beginning so had to knead in sugar as the last step. I'm happy the cookies even turned out, those cherry cookies are by far Santa's favorite.

Justin manned up and left to secure tickets for Santa's workshop at Bass Pro around 8:45 am. The line was ridiculous even at 9:20 am. He scored us tickets for 11 am, he stayed in the store while we packed up and drove up to meet him. I spent the couple hours at home coaxing the children to help clean up clutter. I think Justin had the easier job. Everett and Evelyn begged to stay home since watching a spot of TV was more in their favor. Evelyn refused to wear her cute Christmas dress, I brought it along and made her wear it over her clothes while we were in the store. All in all we had an enjoyable time. The store has a lovely area for kids to play with pop guns, kinetic sand, blocks, a pretend camp spot, and other activities. Amelia followed Josie around until our turn was up. Josie was quite taken with the ATVs. The kids all posed for a single and a group photo. I'm grateful to the silly Elf who got the kids laughing with a cute hedgehog toy. I had Justin buy a digital copy of the group photo. He went to check out while we went to look for fudge samples. I did not realize he had my phone so we spent a good 20 minutes searching all about for him. Once we were reunited our inattentive Everett was left behind at the entrance. We noticed he was missing several minutes later. Took us about 20 minutes to find him. He was bawling and red-eyed right where we got lost at the entrance. I passed the entrance about 6 times, how I missed seeing him I'll never know. He saw me page Justin so once the store employees noticed him he told them our names so we could be paged. I'm happy he stayed put and waited for us to find him. Poor kid was quite traumatized the rest of that day. Lots of extra hugs for him and reassurances of love. We enjoyed a lunch at Chik-fil-a. The Christmas cows made an appearance much to the children's amusement! Evelyn was scared but little Josie handed out several high fives. The Christensen's hosted their annual Posada towards evening. I brought a massive batch of refried beans. Amelia earned points by watching little Payson, keeping him happy for quite some time. She is earning status as a babysitter.

Phillip came down with croup Sunday morning. He thought sticking his face in the freezer was amusing. He was impressed the treatment worked! He was pleased to stay home alone while we attended sacrament meeting. I was able to quickly get my temple recommend renewed. Somehow I managed to snag the Stake President at a moment's notice and get that interview without waiting more than 3 minutes. Justin had a very late meeting Sunday until well after 10:30 pm. We postponed our caroling trip to Monday for FHE.

Posted by Jenni Call at 10:19 AM 0 Stupendous Remarks