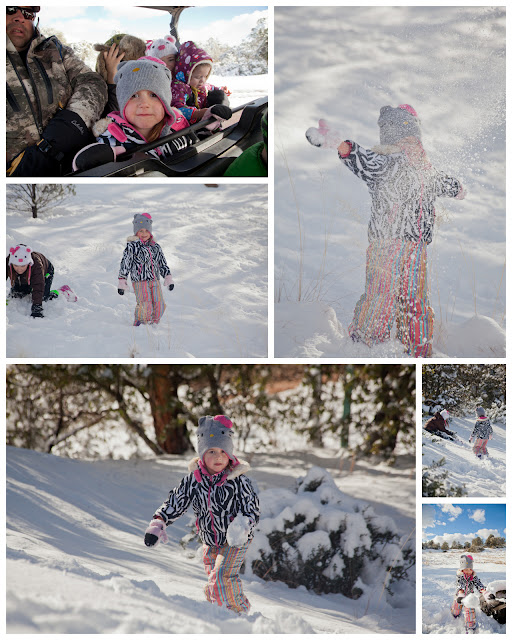 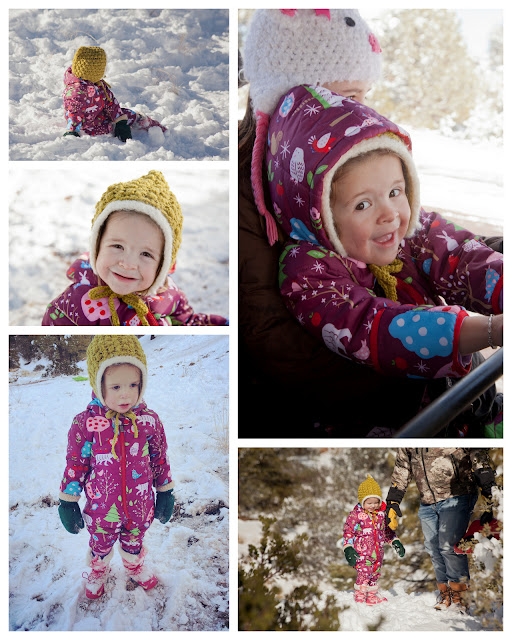 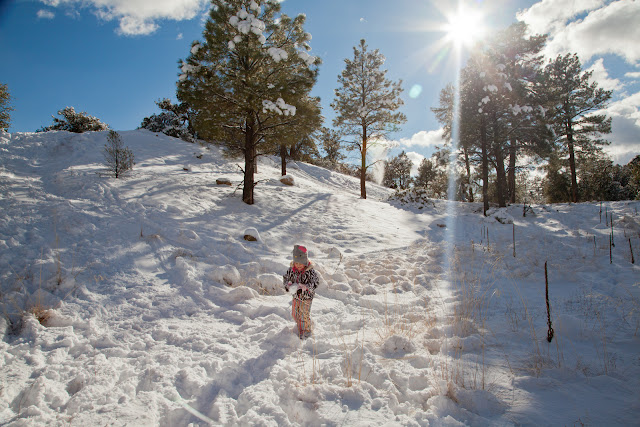 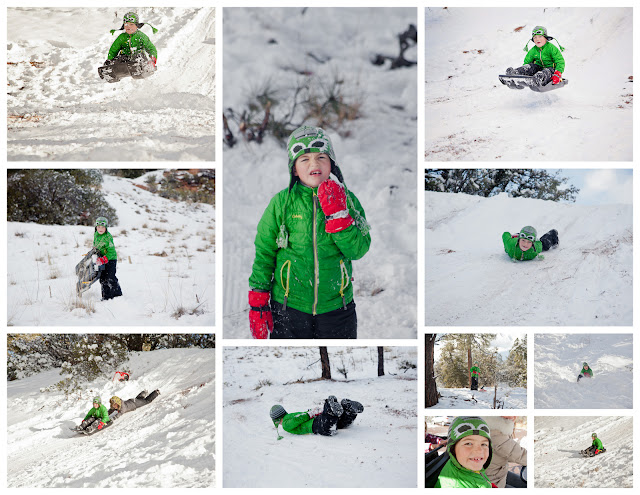 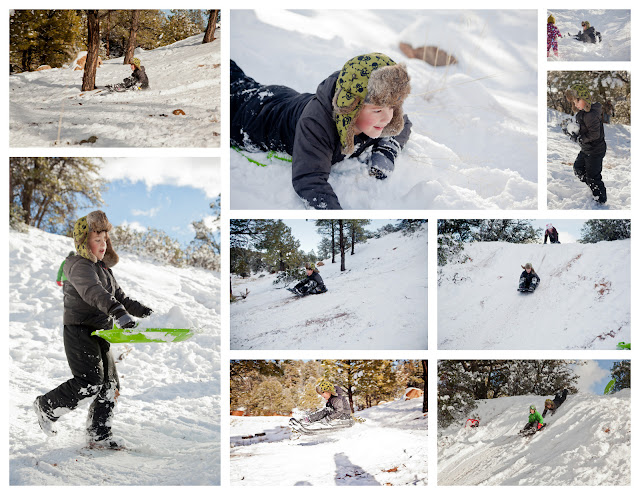 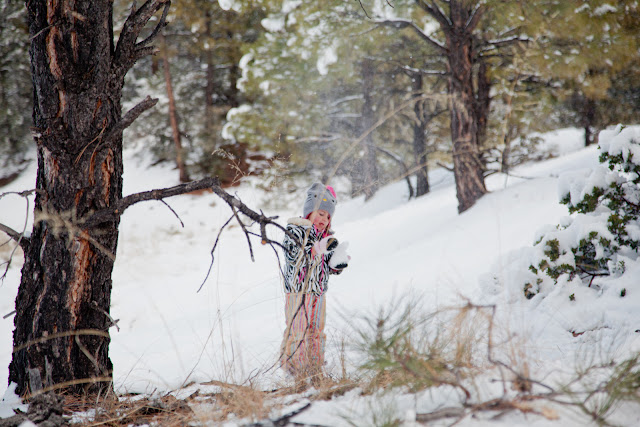 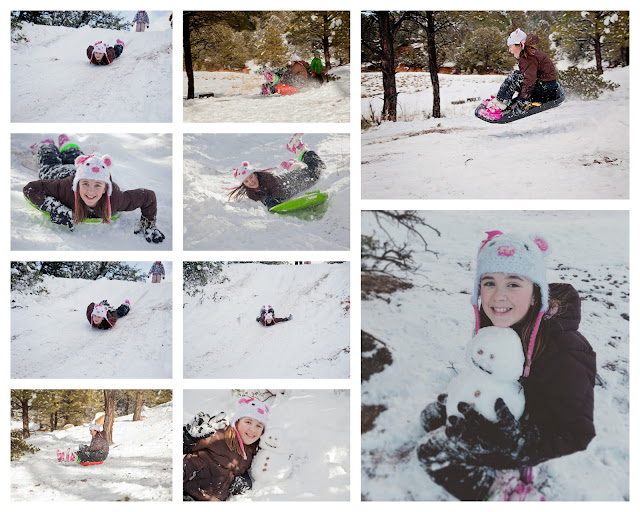 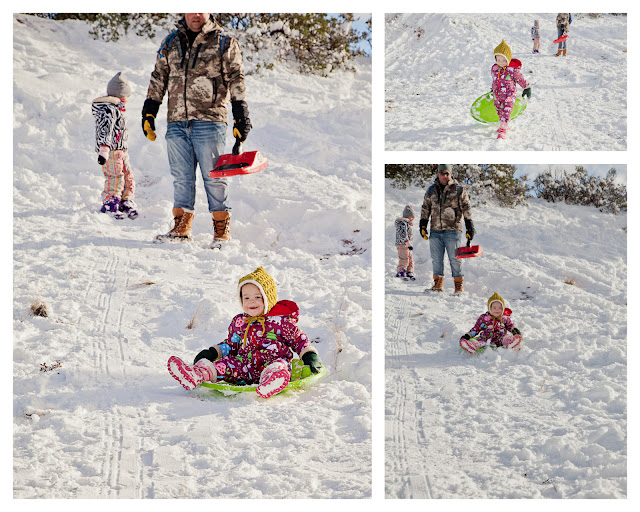 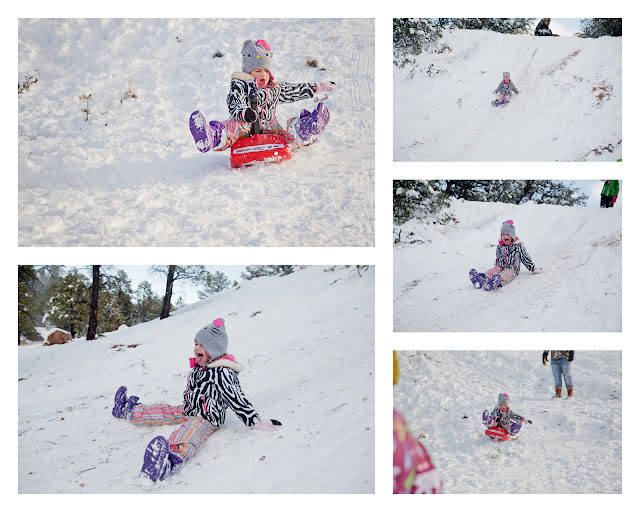 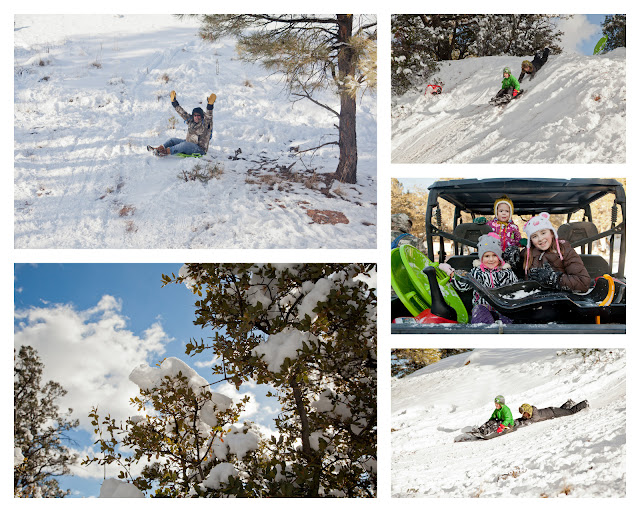 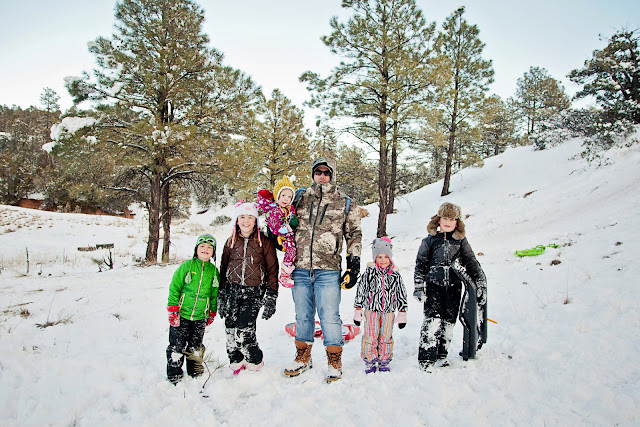 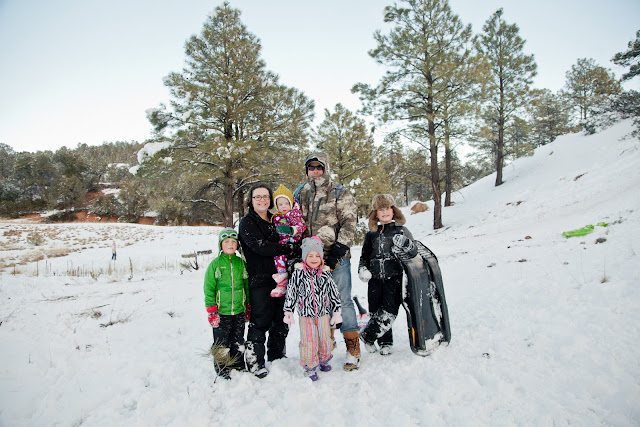 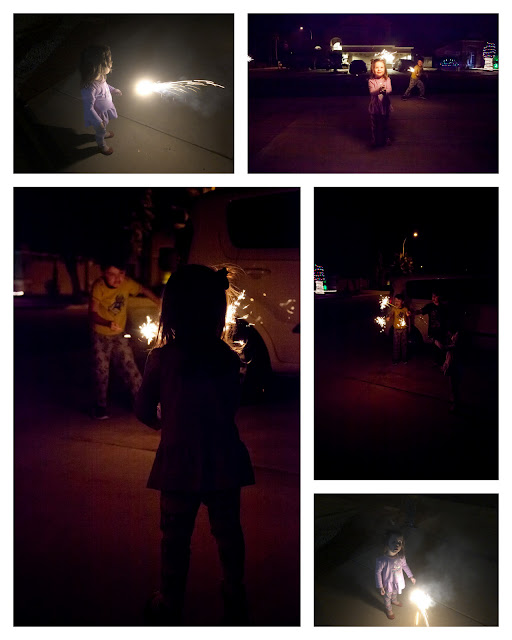 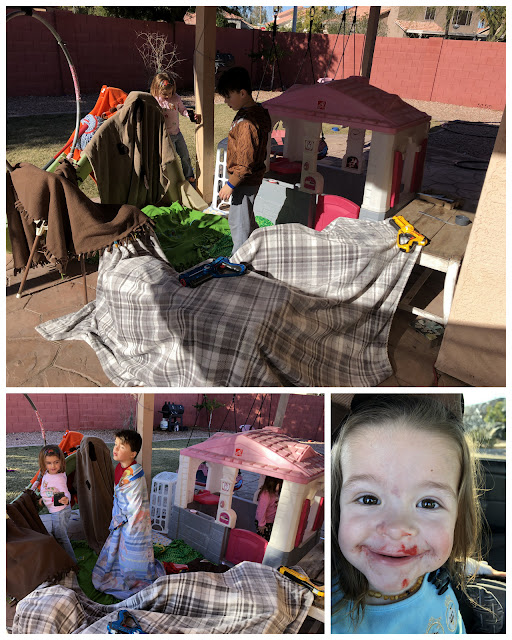 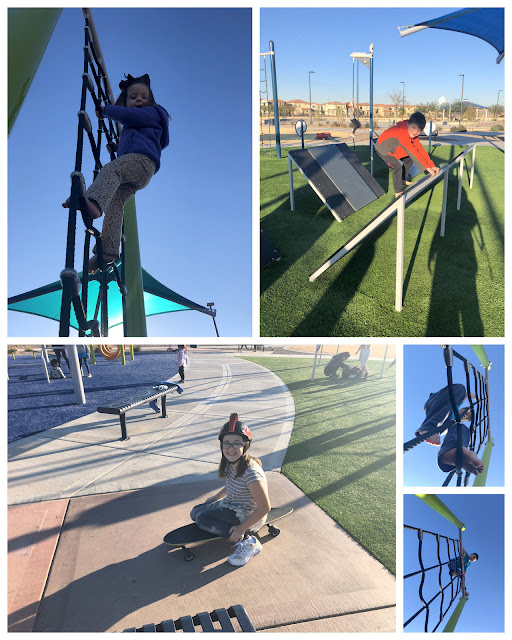 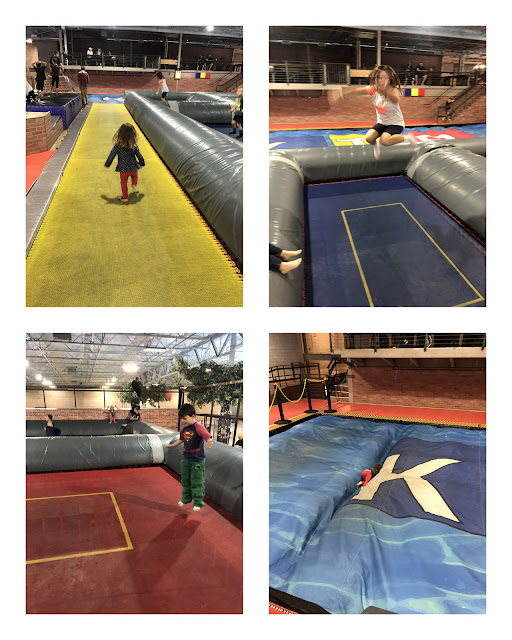 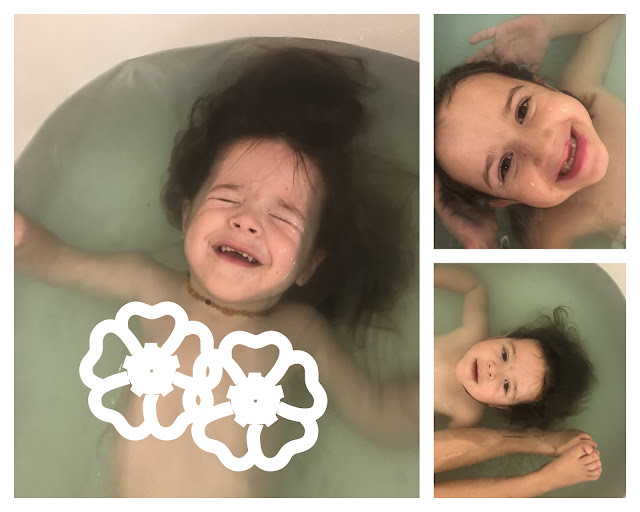 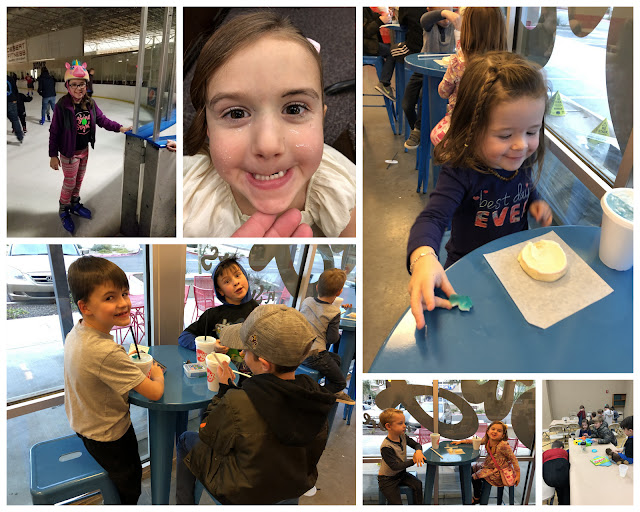 I hear New Year's at home was quite tame. Justin took the kiddos "bouncing" for an hour or so towards evening. The kids stayed up until 10:42 to celebrate the New Year. It was too wet for sparklers so that activity did not work out. I flew back home early the next morning. Flying out of Provo was even more awesome than Mesa! I cleared security in less than 5 minutes! As soon as I walked in the door Josie yelled, "Mom! You came back!!!!" Lots of sweet hugs and kisses welcomed me back home.

It snowed in the higher altitudes on Monday, after some texted with my cousin Amber we learned the snow was still sleddable up in Payson. We quickly tracked down winter gear and loaded up the van. Within and hour of arriving home we were back on the road headed up to Payson. There was a ton of snow up in Flagstaff, but that drive is 3 hrs each way. Amber picked us up in their utility 4-wheeler due to the slushy snow. She was afraid our van would get stuck without 4 wheel drive. Amber dropped us off at their family's favorite site and left us to enjoy the snow for a couple hours. Josie put her boots in the snow then yelled, "Mom! I stepping on OLAF! Olaf is everywhere!" I die! So funny. The little girls were done after 30-45 minutes, but they somehow made it another 90 minutes. We tried out several hills before the kids settled on their favorite, the hill with a snow ramp at the bottom. Amelia made a cute snowman, Josie and Evelyn tromped about throwing snowballs and making angels. The boys were enthralled with the sleds and racing down the slope. I got to ride down a few times with an Evelyn or a Josie on my lap. We caught the ramp most times. Justin caught some hilarious cell phone shots showing the little girls catching air as we flew off the ramp. We had the little try sledding down a shorter portion of the hill with the saucer sled, Josie loved that. Evelyn had a good time, that is until she sled over a cactus and got spines in her pant leg and boot. Towards the end the kids wanted to try belly-whoppers, the same belly-whoppers Frosty the Snowman taught his little friends in the classic animated short. That was quite silly and fun, Amelia tore a rip in her down coat so was leaking feathers like a wounded bird. I like going to the snow, not living in the snow. Amber treated the kids to cups of hot chocolate. My other cousin Tiffany was at Amber's house when we got back. That was a treat!

At home the kids enjoyed sparklers on New Years Day! Josie is quite the little pyro. Evelyn was too chicken to even try. Of course the boys were over the moon to burn fireworks. Both boys soon had 4-6 sparklers lit at the same time. It was quite cold for Arizona last week, highs were in the low 50s.

Justin went back to work on Wednesday. The kids and I settled in to enjoy those last few days of Christmas Break. I misread my calendar thinking I had an early morning dental appointment on Wednesday. In preparation the middle kids all had a play date with the Payne family. I dropped of Mia and Josie near the park entrance so they could play for a while. It was way too cold, so they were back home less than 30 minutes later. I ended up with 45 minutes of alone time driving about. We cleaned up the house a bit and worked on laundry. The boys made an elaborate blanket tent out on the patio for Evelyn and Josie.

Thursday morning I spent a lovely 3 hours in the dentist's chair getting two crowns seated, another crown preparation started and two cavities cleaned out. My mouth was so, so sore afterwards, especially since my entire mouth was numb. We were quite stir-crazy by that afternoon so we went to check out a cool park the Chandler Calls found. It is a obstacle course slash parkour course park with lots of climbing and hanging stations. The Calls joined us after 45 minutes for just a little while. Hooray for cousin time. We visited one more park on our way home that was more fun for the little girls.

Friday we headed to KTR for the morning with the cousins. KTR is an indoor skatepark, parkour park, and trampoline area. It was pretty fun! I even got a couple flips in while taking a turn on the trampoline. Josie was obsessed running down a tramp runway to a large covered foam pit. Phillip even took a turn with the scooter on the skate park side. We cleaned up the house a bit more before going to have fun. Justin was still not feeling well so he came home ready for a weekend of sleep. Sleep he did! I think Justin slept a good 30 hours over the weekend, add in the night hours and we did not see him much. Amelia is now a Beehive! She got to go ice skating with the Beehives on Friday night. She was stressed out picking an outfit she could skate in! None of her jeans fit and her leggings were not up to par. She ended up wearing a pair of my smallest leggings. That girl is growing faster than I can keep her decently clothed. Over the last month she went from a size 4 shoe to a 6.5, same with clothes, went from a 10-12 to a ladies small. Gracious. Sunday she was all in a tizzy planning a cute outfit proper to wear to young person's Sunday School.  We went to the Primary breakfast on Saturday morning so the kids could meet their new teachers. I had to laugh that Amelia was acting all cool and so over Primary when she was excited to be there just last week! Thankfully she forgot about her new status and opted to visit with her friend Averie. Half the teachers were not in attendance so only Phillip met his new teachers. Seems that Primary will meet combined for opening then split into jr and sr for singing time. The leaders served delicious pancakes, eggs and sausages. Josie ate THREE large pancakes! Evelyn and I spent the rest of Saturday morning food shopping. She insisted each kid get a new calendar, I chose a really silly calendar for Amelia. Amelia was not amused at all, she later broke down crying because she hated the calendar but knew I wanted her to have it, so she removed the packaging then sat in the car crying. Everett took the silly calendar and we returned his wolf themed one. The boys and I figured out how to put together the magic box Everett got for Christmas. The little girls were delighted and stunned that Everett could make things appear out of thin air. We celebrated the end of Christmas break with the Russo kids at Sodalicious for yummy drinks and cookies. Josie and Jack unscrewed all the decorative panels covering one side of the wall (thankfully hidden from the front). We quickly reinstalled the panels so no harm, no foul.

My teeth are so sensitive. I can barely eat foods that have any structure or density. I'm dreading the next month of just eating soups while my teeth heal. For those who know me, I sorta really HATE soup. I'll eat it and make it but soup is not my favorite. Cheers. Josie loves taking baths with baff bomps. Evelyn put in a green and dark blue "baff bomp" the dark color really freaked out Josie. She jumped out of the tub shivering with fright, crying her head off. She hate dark, scary "baff bomps!" LOL

Posted by Jenni Call at 10:43 AM 0 Stupendous Remarks