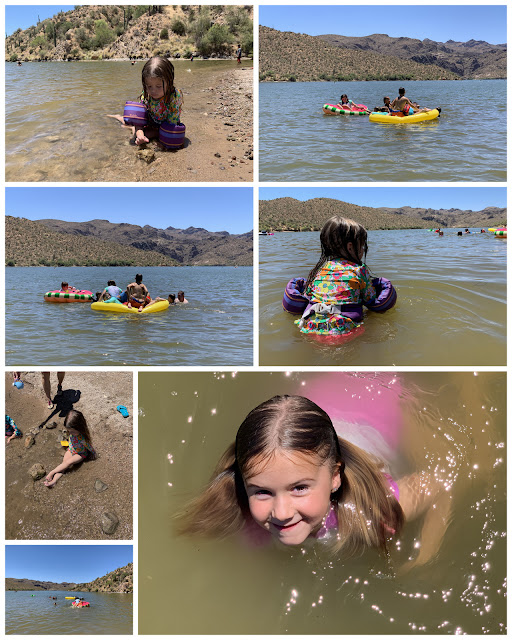 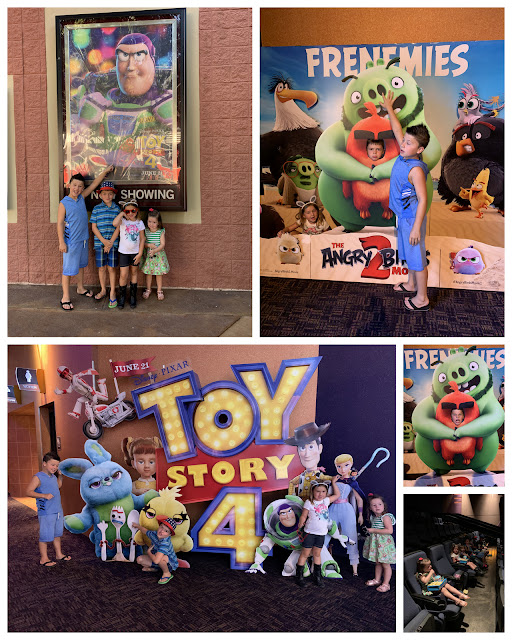 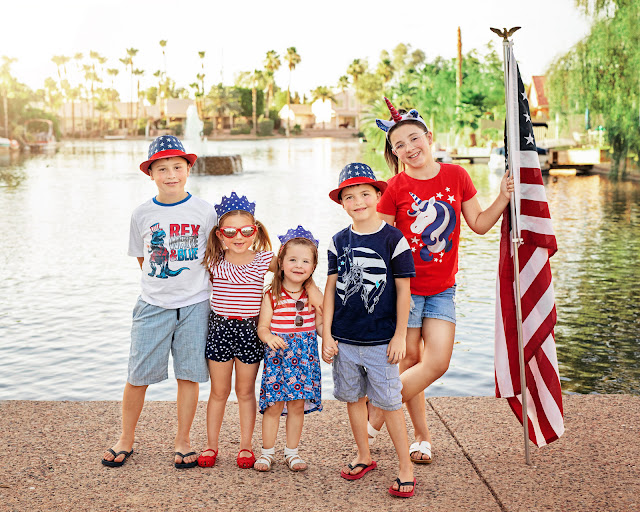 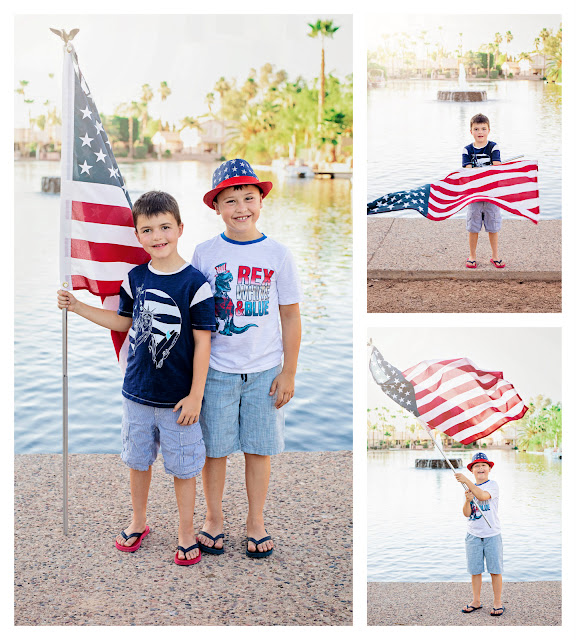 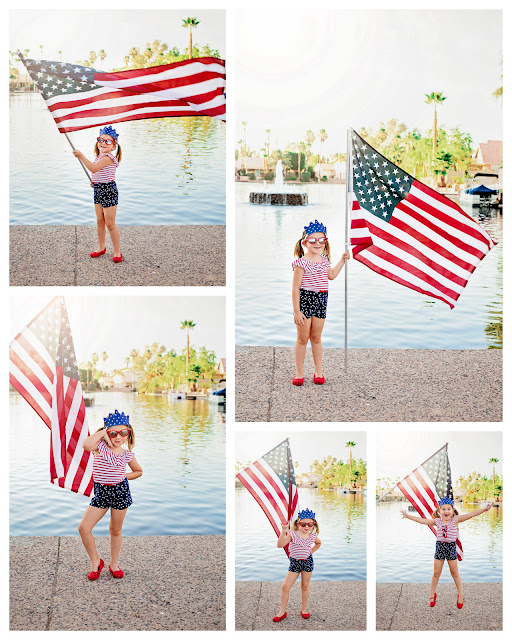 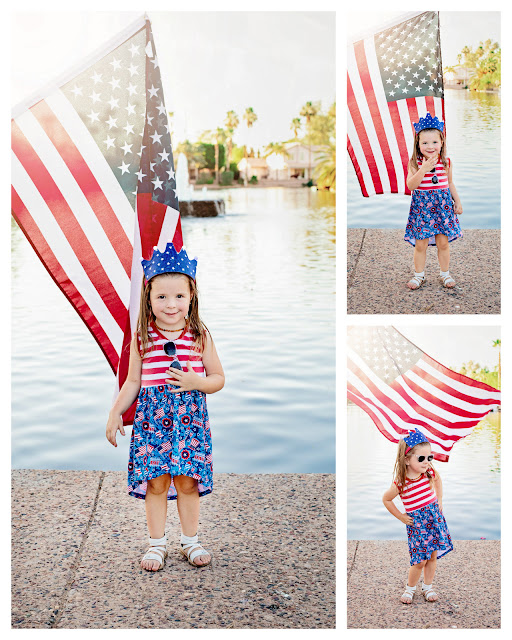 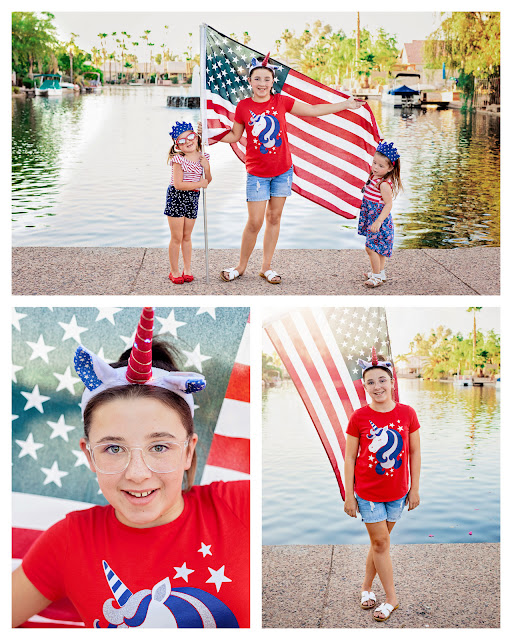 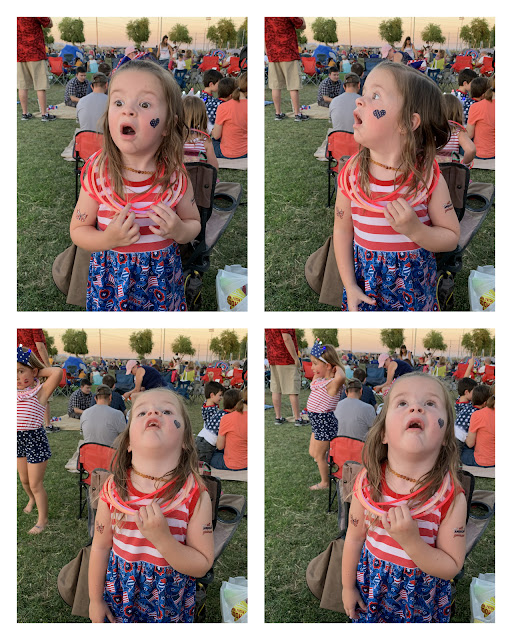 Josie heard a train and saw a jet at the same time, she was confuzzled. 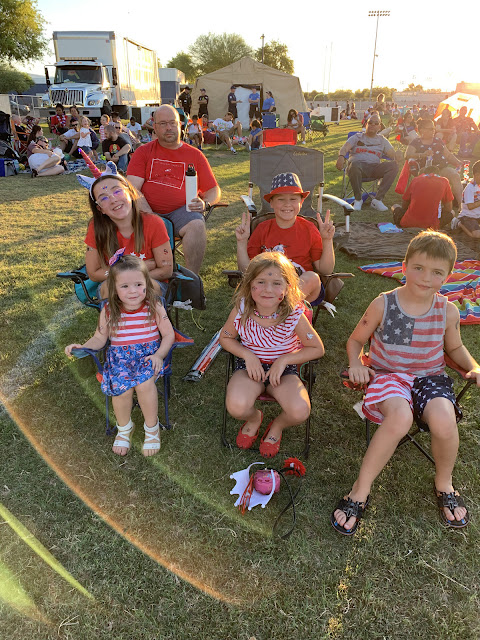 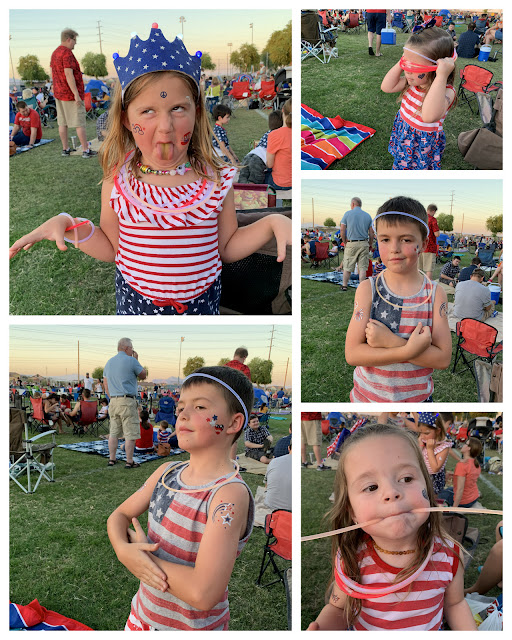 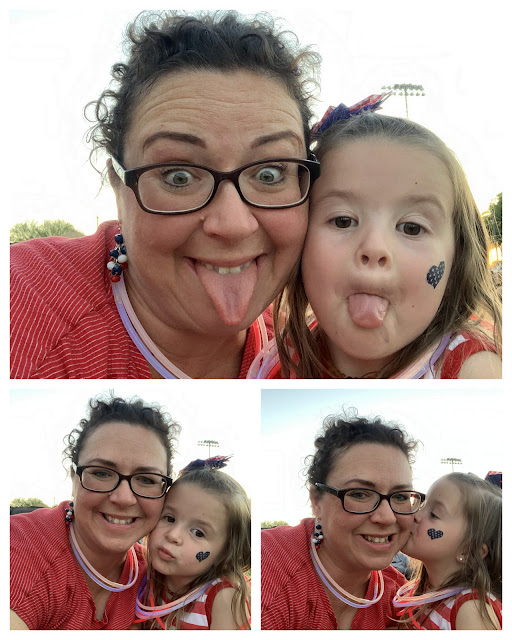 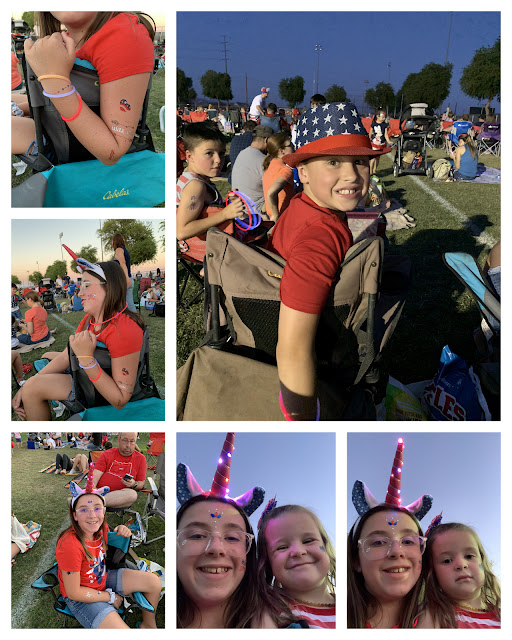 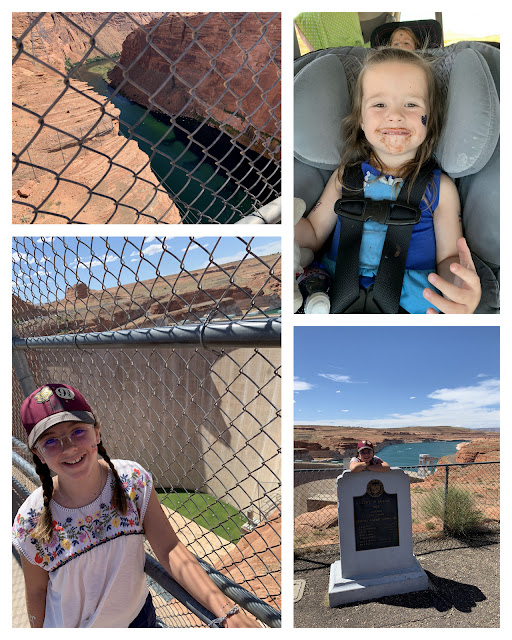 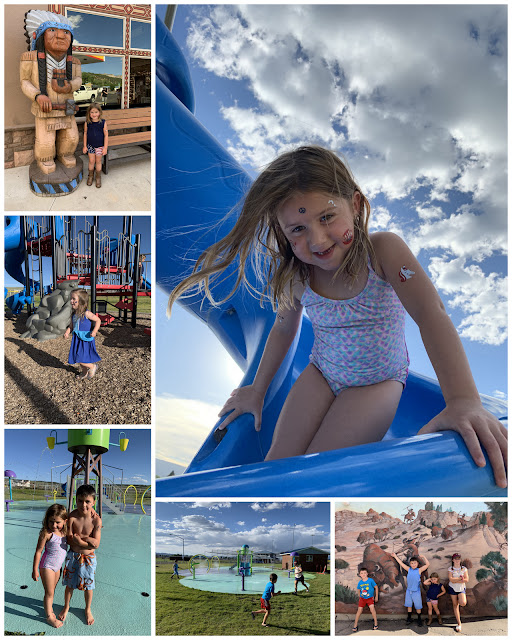 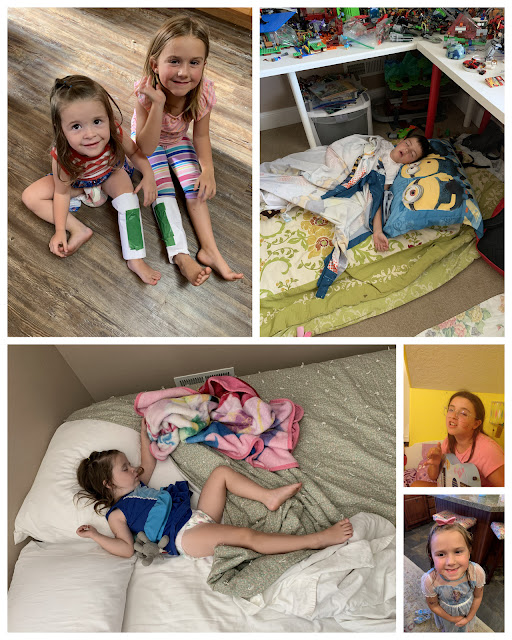 I'm writing this 2 weeks after, pardon my terrible memory. Maybe the photos will tell the story better for me.

We met up with our ward's Mom and Tot's group Monday the 1st for a lovely day at Saguaro Lake, Butcher Jones Recreation Site. The other two families brought along huge floaties that all the kids enjoyed for the day. The bottom was a bit slimy so I kept my flops on in the water...plus I *might've* been scared of the crawfish. Brother Payne celebrated his birthday with the three women and huge crowd of kids. He was quite the entertainer, the kids had a game of some sort that looked like king of mountain. Just 5 yards away from the water we baked in the sun, that water felt amazing. The Paynes shared sandwiches with us since I did not bring any food other than snacks. I heard everyone was leaving at 11. Sister Smith did leave at 11:30 but none of our crew was remotely ready to leave. Bless them for saving my hungry children. We had Ryan along for the day so the boys were busy, busy. On the way home we fed our hot selves with ice cream cones, best treat ever!

Tuesday afternoon I had a fun photo session for a sweet girl turning 12 months. Her theme was boho camping. We sweltered outside at Nichols park with the mosquitoes searching for a meal. Evelyn made herself and Josie leg casts out of paper and duct tape. The girls hobbled about pretending to be in need of medical assistance. I quickly edited the session because we needed to pack up for our Utah trip by Thursday. I added some work by taking fun photos of the kids in their "red, white, and bubs configuration." A joke created by Justin to poke fun at my love of dressing for holidays when Amelia was a tiny baby. Phillip managed to flip the eagle off the top of my new flag pole, thankfully it did not land in the lake. Evelyn was making me laugh with all her inventive poses.

Wednesday Amelia got to spend the day with Chole for a change. I hear they went out to breakfast with Chole's Aunt, then spent the rest of the day working to sort out Chloe's room. Behind those words kindly read, the girls probably played Gotcha Life and watched TV most of the day. The rest of us went to see Toy Story 4 at Harkins with Ryan and his family. During the opening previews, was the exciting trailer for Frozen 2. Ryan's sister yelled, "Elsa is my BEST FRIEND!" Josie immediately yelled back, "No! She's MINE!" Toddler turf wars right there. I opened Josie's fruit snacks to avert war. The movie was a total shift from the prior three, it was good but not really Toy Story. I came home to do feverishly finish editing photos before the 4th. I accomplished that task but gained a neglected house in return. My new opinion is that the kids must LOVE to clean. They clutter so much stuff about that must be the reason.

We quite enjoyed having Justin home for the 4th. We cleaned some, packed some, did laundry, packed some more, the usual. Justin did take the kids to the splash pad with the pirate ship all by himself! I stayed home to pack and finish stuff before we left. Justin grilled up chicken thighs for dinner. On the side we had broccoli salad and cobbed corn. After dinner we headed to Higley High for the fireworks show. Parking was not too bad, especially with my parking fairy privileges.  We marched the kids down to the football fields and set up camp chairs for the evening. The girls decorated themselves with lots of patriotic tattoos. The boys edged in on the action after most of the good ones were taken. Evelyn was especially decorated. I had a large package of glow sticks for the kids to play with. Once it started to get dark Amelia's patriotic unicorn horn was highly visible. I could see it from 50 yards away. Beam me home unicorn girl. Everett spent a chunk of time in the roped off section for games and ball stuff. He loves his sports. The fireworks were "meh" one about every other second, the Mesa show was much more explosive. I did like the venue better in Gilbert. Getting home was quite slick, no real traffic to speak of. Justin put the car-top carrier on in the dark once we got home. Best part of the day was digging into the fruit pizza masterpiece I made as dessert. Sigh, that was delicious.

Friday morning we quickly packed up the van...after I slept in until 8. My bones are mighty tired these past few weeks. We pulled out around 9:30 so not too bad. I stopped at Lake Powell damn this time since it was actually daytime. Amelia willingly got out of the van to explore the bridge for a few minutes. We both laughed about the fake grass adorning the top of the damn base. Quite the amazing view, with the red canyons cut with blue water. I was doing pretty well driving until we got to Panguitch, UT. That is still an 8.5 hour drive for us. I messaged some friends from Sidney to see if they were around. The Gallegos moved to Panguitch 5 years ago once the rumors about Cabela's were starting to realize. They were on their way home from Cedar City temple but were less than an hour away. We found a cute little park with a slash pad and play structure for the kids to play on while we waited. The water was freezing, plus the temperature was a moderate 72, cold for my desert creatures. Josie was not keen on getting wet with cold water so she parked herself on the play ground side. As the hour drew to an end we dried off and went to find some dinner. The Gallegos recommended a pizza place. The cashier misheard my order so only made a small pizza and an order of spaghetti. We waited an extra 25 minutes after waiting 20 minutes for our first order. At least the kids were entertained with a movie. We found the Gallegos garage house well after sunset. The home was inhabited by Susan's parents until they got too old. They renovated the home to something special. An elevator whisked us from the garage floor (chock full of super fun ATVs) up to the home part spanning the entire area of the garage. The kids immediately took to two poker spinner games set up for kicks and giggles. We ate pizza while catching up on our news. Justin booked a hotel in Beaver for the night. Took us another hour to get there, arriving around 11 pm. The hotel was a complete dive, but it was high season so everything else was booked. Phillip walks into the room only to start complaining about his tummy hurting. He barfs in the toilet. The toilet will not flush. Now I've got two kids who need to pee but won't use the disgusting toilet. I finally finagle the beast to flush and bam! that issue is solved. I set up Phillip with a barf bucket just in case, at this point I thought he just had motion sickness. Nope, he barfed 5-6 times through the night. Did he use the bucket? Nope, gross animal puked all over the floor, coffee table, bed, etc. I tipped the maid. At one point Josie started talking about her goggles, she was dreaming about someone taking her precious goggles. Evelyn and Josie ended up completely entwined in each others limbs, hair, and pjs. I was quite impressed. We left early.

Saturday we continued our journey. It was not a long one. We were at the Lances before lunchtime. Yay! My boys were quite disappointed Everett was not at home, Evelyn about threw a tantrum because Penny was gone. Somehow we managed to pass the afternoon by with just the James Lance family. Amelia and Lia went on an adventure to the gas station and shaved ice shack with Evelyn in tow. I got a much needed nap with Josie. Courtenay FINALLY arrived to provide playmates for the younger kids. It was a cousin party for the next few days. The girls got a fun bath in Miekka's indoor pool. I ran to the store shortly after getting the boys situated in the tub. The item of the trip I forgot was diapers. Yeh, not a good item to forget. About 5 minutes after I left I got a text from Miekka that Phillip had diarrhea on the bathroom floor, it smelled too gross to leave for me to clean up. Oh man, that was embarrassing. Phillip later told me he need to fart, he was not sure it was a fart or a shart so he let it fly. We had a discussion about sitting on the toilet in case you choose the wrong fart or shart scenario. Sorry Miekka, I owe you for that one.

Posted by Jenni Call at 12:37 AM 0 Stupendous Remarks