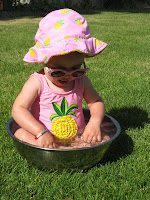 We celebrated a great week! It started with food and ended with food!! The Lance families met at the Centennial pool for an evening of swimming for FHE. The bigger boys had fun on the awesome water slide. The water was pretty warm but the air was cooler so Amelia got chilled after 30 minutes. Justin was on an airplane to LA while we played. He attended a 3-day training there.

Our neighborhood book club met Tuesday night. The books we read this month were 3 short stories about Griffin and Sabine. Each book is filled with post cards and letters between Griffin and Sabine. The books make an interesting read. I hear there are 3 more books of the same series to indulge in. While at book club a little 3 year old girl taught Amelia how to pretend eat food. The little girl would give Amelia a pretend bite of peas from a Fisher-Price play table. At first Amelia was like, what the heck are you doing? Then she caught on giving pretend peas back to the girl and eventually to me! It was so interesting to watch her grasp the concept and role-play. 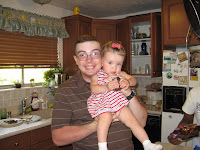 Wednesday I picked up some of our Cub Scouts from day camp up Millcreek canyon. The boys were at the Jurassic land section of the camp. It was stinkin' cool. We spent the rest of that day at mom's home to enjoy Joseph and Jeff's company. Amelia played a while in grandma's backyard with the hose and a large bowl, which became a perfect-sized pool for her. Grandma and Grandpa Lance arrived from Gilroy Thursday evening. Mom made calibicitos (a vegetable dish) and scones for dinner. Grandpa loved the scones. Justin showed up after dinner much to the delight of Amelia. We chatted for a while longer before going back home.

Logan and Anne were married on Friday at the Bountiful temple. Aunt Charity took Amelia for a couple hours so Justin and I could attend the sealing. We were married in the same temple so it was a tender reminder of our own marriage. I remember smiling so much that my face hurt!!! I loved watching Grandma Lance interact with her three siblings, Mary, Fred, and Margaret, before and after the ceremony. The wedding was very instructional and sweet.

Logan and Anne looked very calm and content. After pictures we headed to Mt Green for lunch at the local fire station! Matt and Laura decorated the rec room with frogs (Anne) and monkeys (Logan). At the entrance were two baskets filled with foam frogs and bananas. I loved the theme! Amelia wanted to hug and kiss each of the monkey placemats like a true Call girl. We hung out at the Pettits until the reception began. We only stayed a little while then headed home. It felt like three days had passed since that morning. Weddings can make for a long day.

Saturday morning I attended a photoshop class for two hours. Justin stayed home with Amelia. After class I took myself to the Instacare due to a nasty sinus infection. My face and teeth were literally aching and pulsing with intense pain. While at the doctor's office my sinuses actually started to bleed. Yuck. The rest of the day we mostly spent lounging about. Justin was very attentive. He made two Walmart runs for medication and even a Del Taco run. Thanks honey! Our ward threw a magnificent BBQ towards the evening. One little boy gave Amelia a nice kiss on the cheek. She started bawling! Keep those boys away...

Today my face didn't hurt, just the normal "I have a cold" aches. Phew! I'll take that any day. The next week will be filled with a plethora of family dinners and parties. Dad flies in tonight!!! Finally! The Lances will fly to Jordan the evening of July fourth. Jeff leaves two days later to resume his Iraq deployment. Justin and the Lance Grandparents will fly to CA on Sunday as well. Let the parties begin.