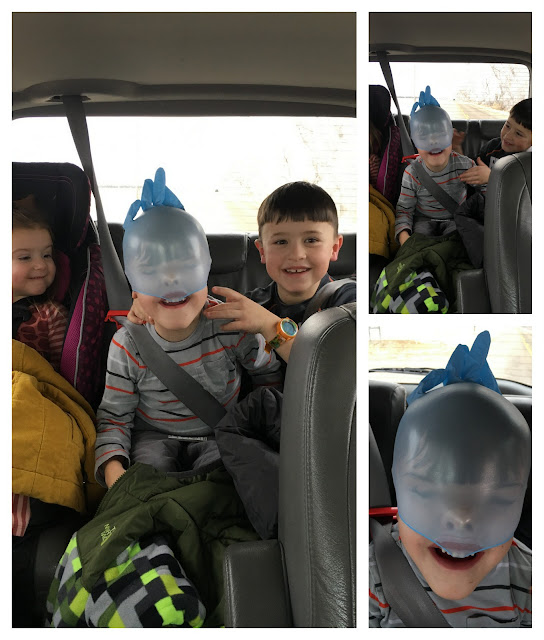 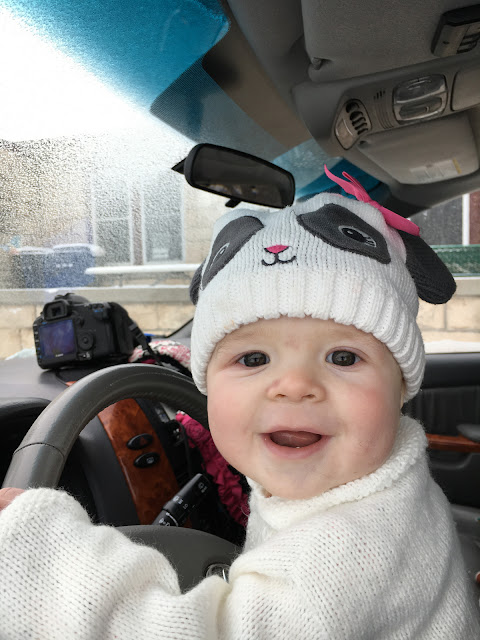 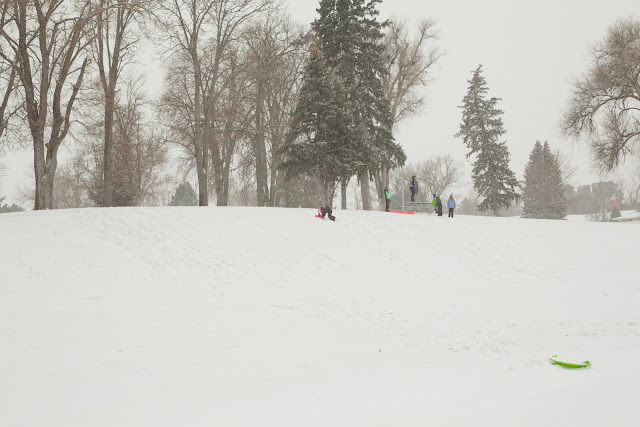 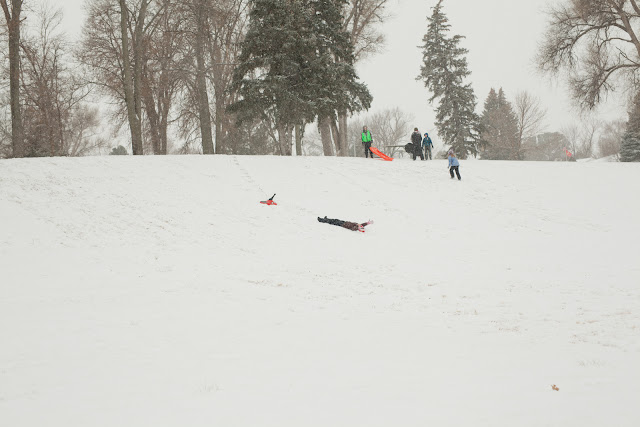 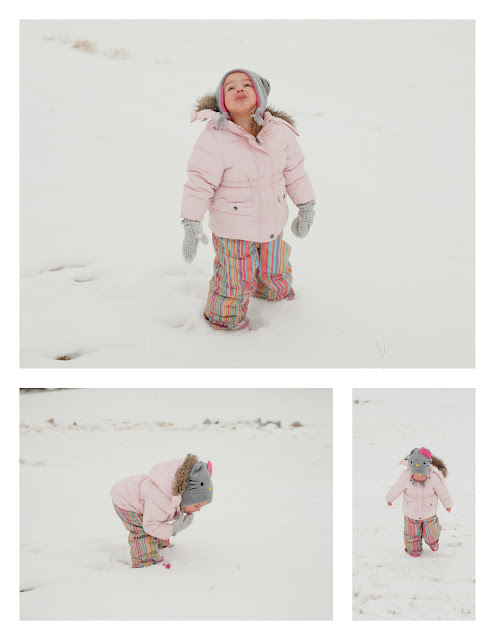 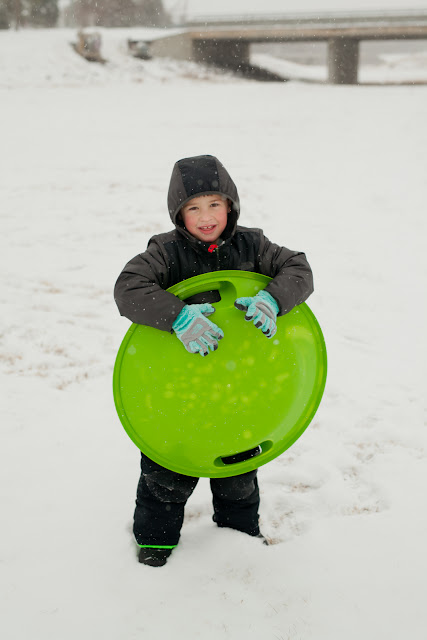 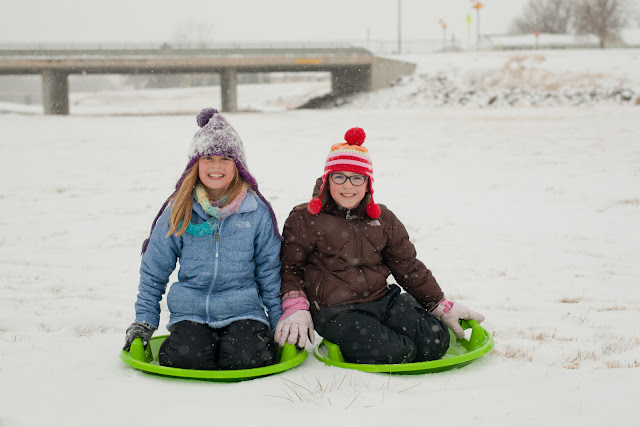 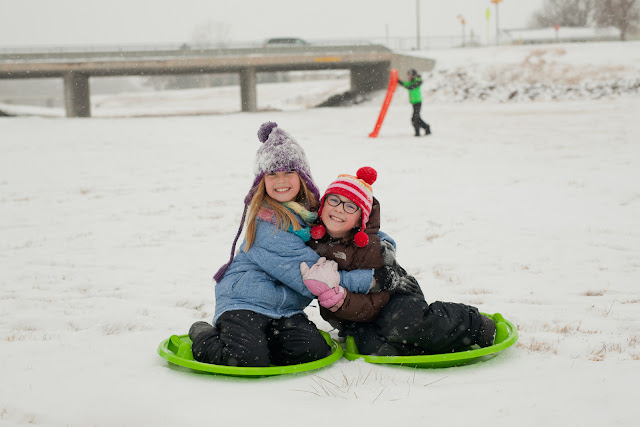 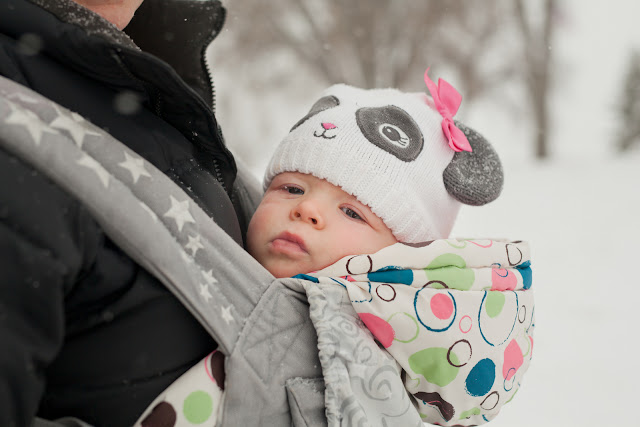 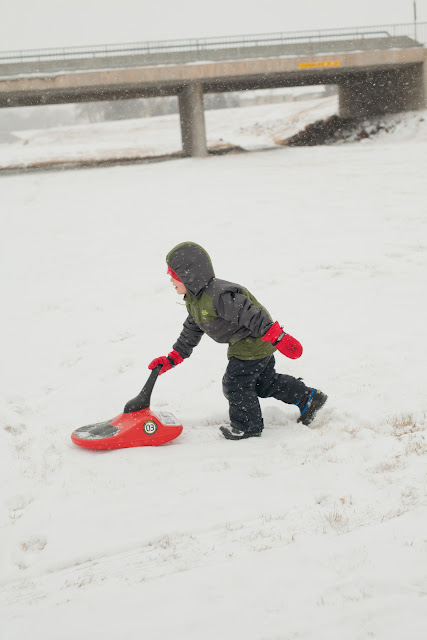 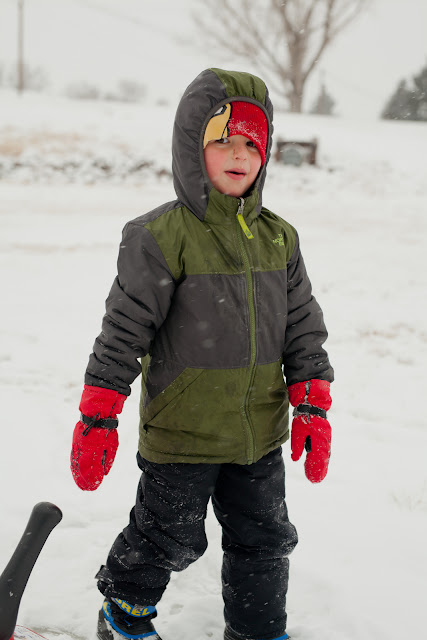 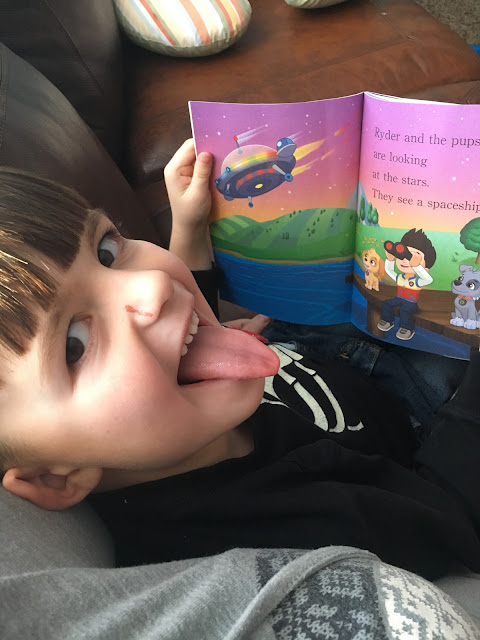 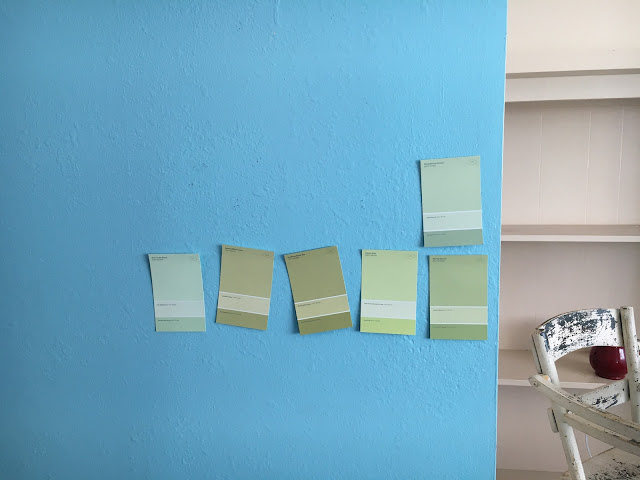 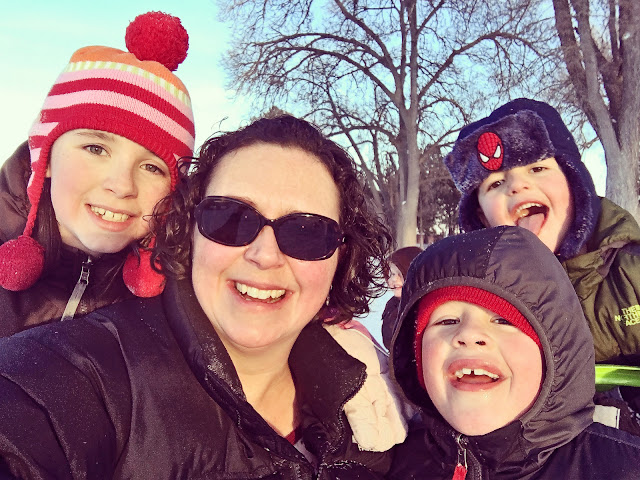 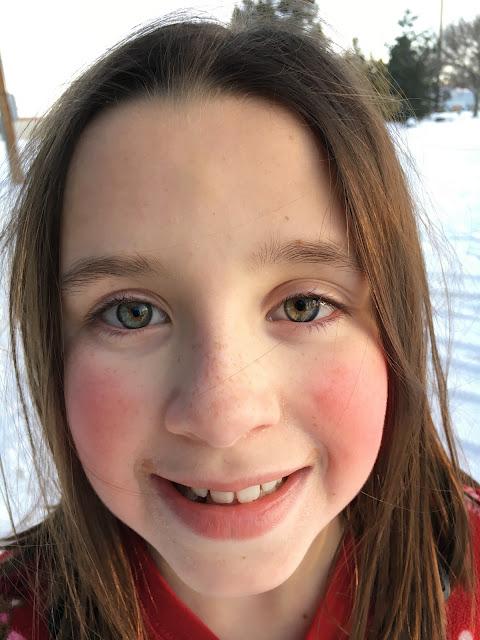 We had a great week to finish up Christmas vacation. Justin went back to work on Monday. Amelia got to spend an entire day with Ella out in Dalton. Alison picked her up at 8 am, I hear the girls got to pick out donuts for breakfast at Safeway! Spoiled. I did not hear much about her day, just a fun day with friends. We picked Amelia up in Gurley at 5 from Ella's basketball practice. The rest of us spent a few hours at the Markum's home in Kimball. Phillip begged for a playdate with his buddy Conner. He made him a bead and pipe cleaner friendship bracelet the night before in anticipation of their play date. He was so very excited. We let Josie take a good morning nap since she is still teething and quite restless at night. As I pulled into the road I looked back to check on the kids. A blue faced chicken head was staring back at me. Everett had pulled a glove so far down on his head the glove was hooked to his front teeth. I about lost it as I laughed. Course, I HAD to pull over and document his nerd face. The boys played a long intricate game with Legos, fake boogers from some board game, and Doc McStuffins. Evelyn was quite content to play with Regan and Shaylee's toys. Playing with new toys you don't have is the same as a kid in a candy store. I enjoyed a nice visit with Karissa. We stayed until Karissa had to leave for her kid's tumbling class. We drove straight to Dalton, the backtracked to Gurley. I about froze my face off when the van door opened. It was then I noticed the temperature was a frosty 9 degrees.

Everett spent the day with his friend Zachary the next morning. I dropped him off once Josie went down for a nap. Evelyn and I ran a couple errands after dropping Everett off. Her idea of an errand was grabbing a quarter to get a gumball at Safeway. My idea was depositing a check and getting some more bins at Walmart. A skiff of snow smattered the ground. Nothing of consequence, except to create ice. I worked on packing up Christmas the rest of the day. I also removed the rest of our living room decorations. It took me a couple more days to fill nail holes, wash walls, and clean up the room. Now the room looks completely bare...well, except for the toy messes and furniture. I am inspired to paint and update the room again. Maybe I can last another few years here with a new view. I am trying to decide on a new accent wall color, some shade of green. Phillip immediately started to cry when he noticed the green paint samples taped to the wall. He hates the color green. He hates change as well.

Wednesday Amelia invited Katelyn over to play. She is a really fun friend, inventive, polite, and silly. The girls holed up in her room playing American Girl Dolls with their horses. I found a 24" horse and foal for American Girl dolls on our local for sale site. She named the pair Vanilla and Pudding. I was so proud of her for sharing her foal with Evelyn. Snow! Snow was finally falling, beautiful, fluffy snow was falling straight down instead of horizontal. By lunch time we had a couple inches with more coming. All the kids were quite enthusiastic for an afternoon of sledding. Sledding while snow is falling seems magical. I dropped the older kids off to sled then took a few photos of Josie in a vintage velvet coat and bonnet during the storm. She was not so keen on the idea. It was pretty darn cold, temperatures hovering around 5 degrees. Mostly the girls and I stayed in the van watching the kids play. Once the older kids reached their frozen limit they stalked into the van to get warm. Evelyn ventured out twice to catch snowflakes on her tongue. She is not keen on the idea of sledding, it looks scary to her. Instead the amuses herself stomping on ice and catching snow flakes. Our white chicken chili soup dinner that night tasted so warm and delicious. Justin and the boys bundled up after dinner to clear the driveway and walks of snow.

The kids went back to school on Thursday. I was scoffing over the school district starting school on Thursday. In all reality, it was so nice to ease back into school. I am sure the teachers were grateful as well. We quickly got homework completed then played with Christmas toys after school. Everett read me an entire level 1 reader for homework! He is pretty good at anticipating what words come next.

Poor Justin came down with the nastiest of nasty sinus infections. He was up several time past midnight with stuffed sinuses. He's hacked, coughed, and moaned all week. I seriously almost sent him to the man-cold emergency hospital. If Sidney had one I would have checked him in. Snicker. No, in all seriousness, he was pretty sick and not feeling well at all. Seems like he is on the mend now. Thursday night Josie pulled another all-nighter. I was so tired as well, after 4 previous days of attending to her at night I had Justin take a turn. She was just awake and ready to play. We were both exhausted on Friday. I took a nap with Evelyn snuggled next to me watching Cinderella. Friday we had record temperatures, a low of -21 with a feels like temperature of -36. In WY one town reported a low of -56! I think Alaska had warmer temperatures than we did this week. Brrrrrrr.

I need to take a moment to rave about Amelia. She brought home her 2nd quarter report card on Friday. That amazing child earned straight A's again! She finally found her groove with spelling and grammar, gets the darn packets done three days before they are due. She reads about 3-4 books per week. We are busy studying for the spelling bee the end of this month. We are so proud of her, especially her hard work.

Saturday afternoon the kids spent a happy couple hours sledding at the park. I dropped them off and ran errands with Evelyn. Justin stayed home to nap with Josie. Evelyn and I went to Salvation Army, Safeway, and to clean out the van. We checked on the sledders every 20 minutes. We got to sled for a bit before we left. I got to sled down the hill a good 10-15 times. The mini-luge sled is wicked fast and so fun. We teamed up a couple times to make a train sled! Everett had to pee, I helped him with all his snow clothes. The little dude peed all over his coat, pants, and snowpants...and me. He is not very talented when it comes to pottying outside the toilet arena.

Today in church I was quite in demand. I played the organ in sacrament, the piano for Sr primary, and taught Sunday School. Phew. We have a new RS presidency as well after 4-5 years. Brother Haley was also called to serve as 1st Counselor. I can imagine that Bishopric meetings will be quite amusing with Grunig, Haley, and Franken as attendees. Those three will have fun and get the work done. We are so sad to lose the Hill family. I was in tears as Brother Hill bore his testimony. Shoot! We did gain a new family this week, they bought the Hill's home. After dinner I played a primary song on the piano. Phillip sidled up to me and started to sing, then laid his head on my shoulder. It was such a sweet gesture. Melt my heart.

Josie turned 11 months old on Friday. She weighed 16.2 lbs on our home scale, and measured 27.75 inches (a tiny weight at 7.9 percentile in weight and 18.1 for height). Seems like she suddenly grew out of tiny baby mode. She is not much for snuggling lately. She just wants to sleep on her own, no pre-bed rocking anymore. Boo Hoo. She is a distracted nurser. All she wants to do is try to scoot around. She is making strides on her belly and trying to crawl. Once in a while she pulls her knees up but then launches herself forward. A new favorite this month is learning to make animal noises. She can make a dog, horse, monkey, and cat sound. Mostly, just cute noises that she thinks replicates the animals. Her favorite toys are books and toys her siblings leave on the floor. She also says Hi and flexes her fingers and waves. Little cute stinker!