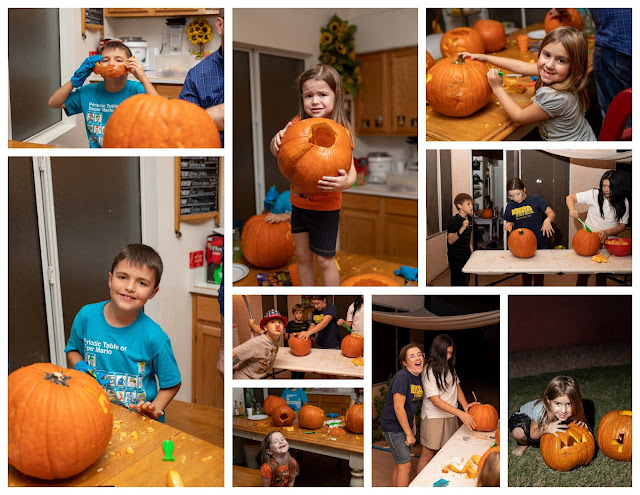 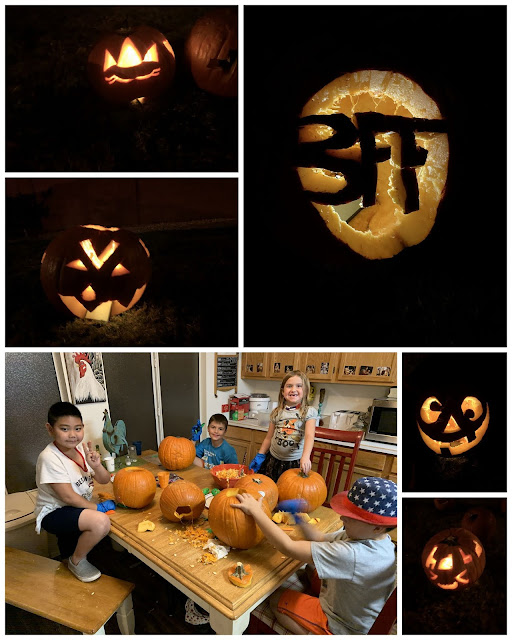 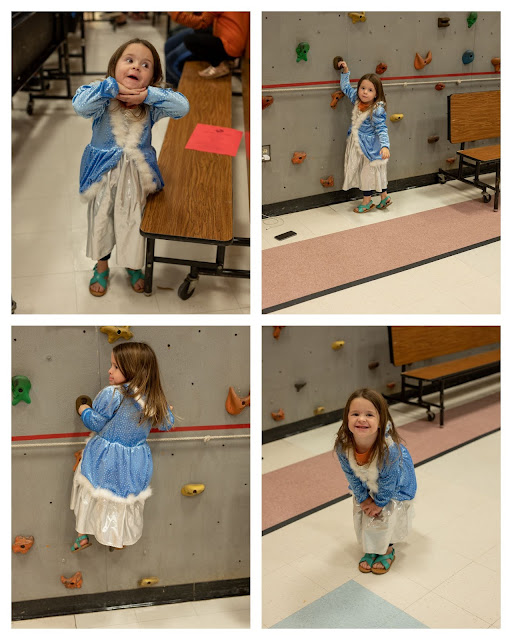 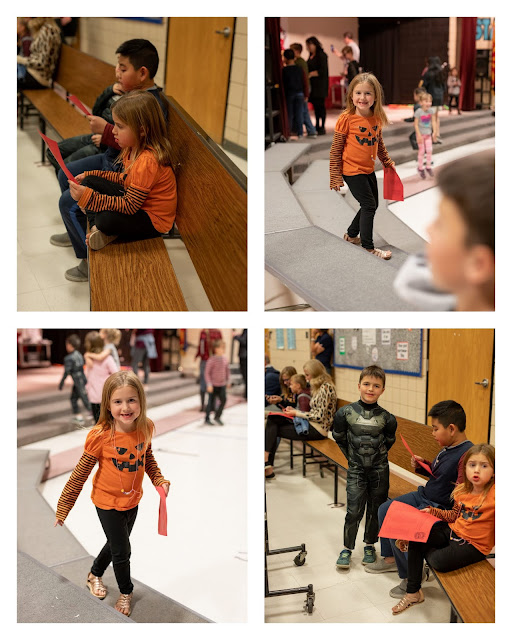 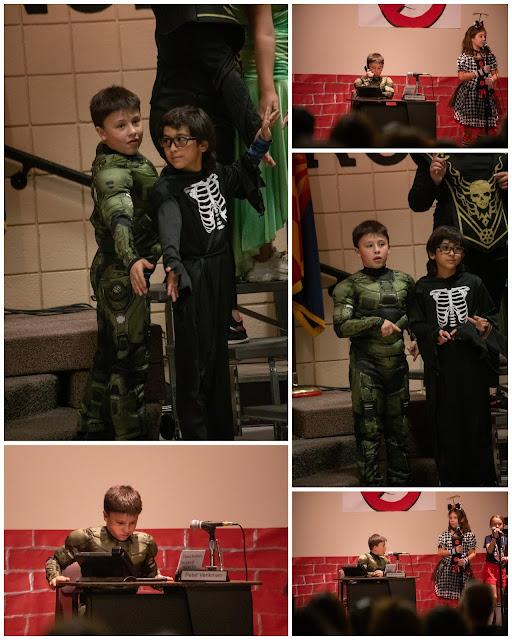 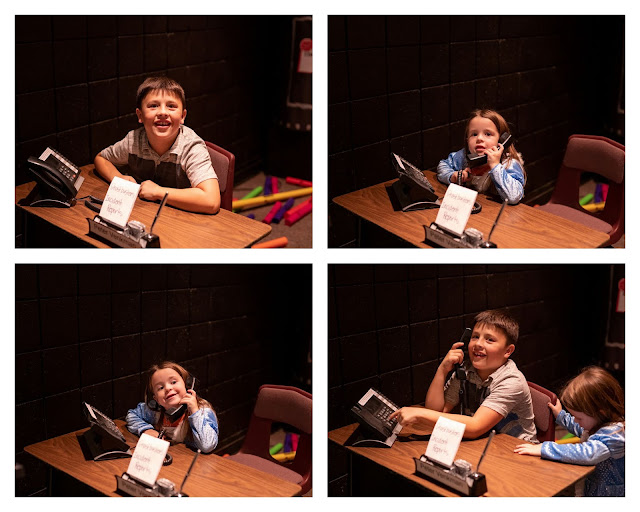 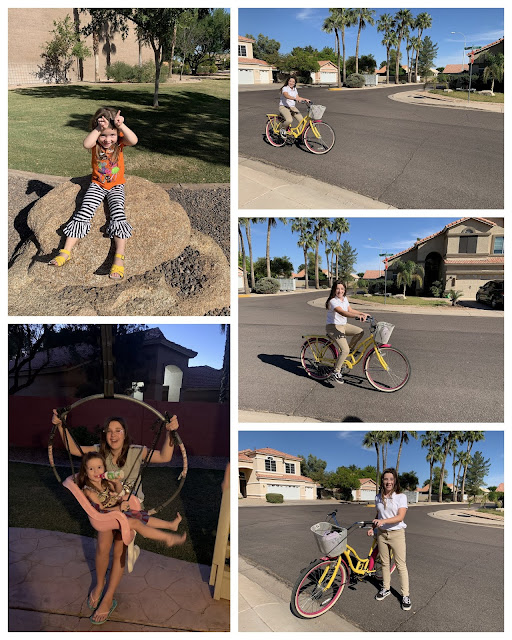 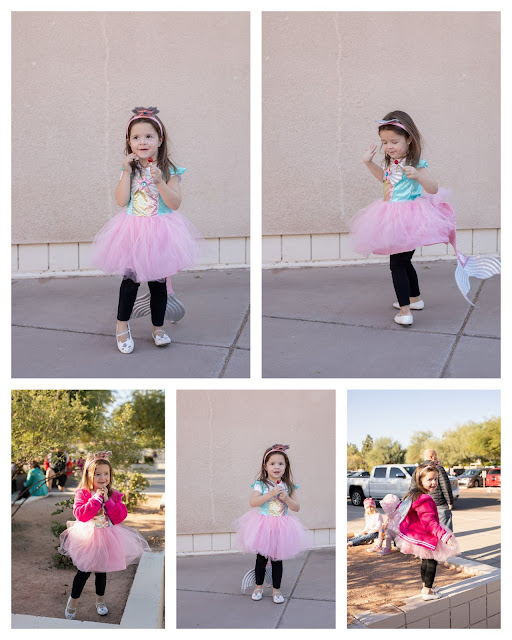 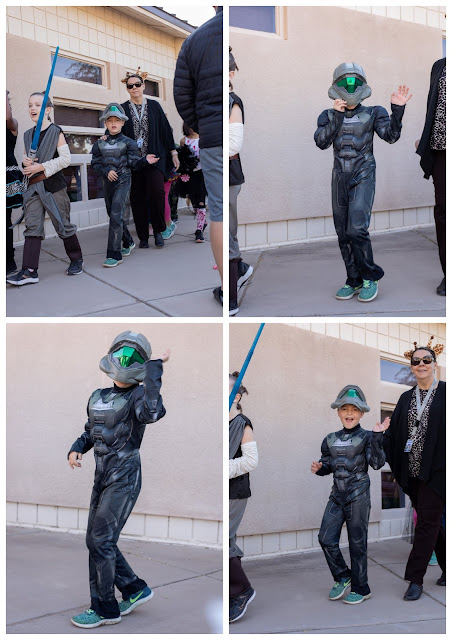 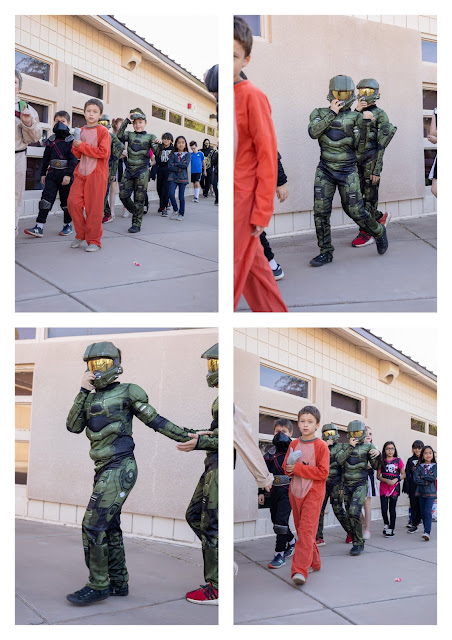 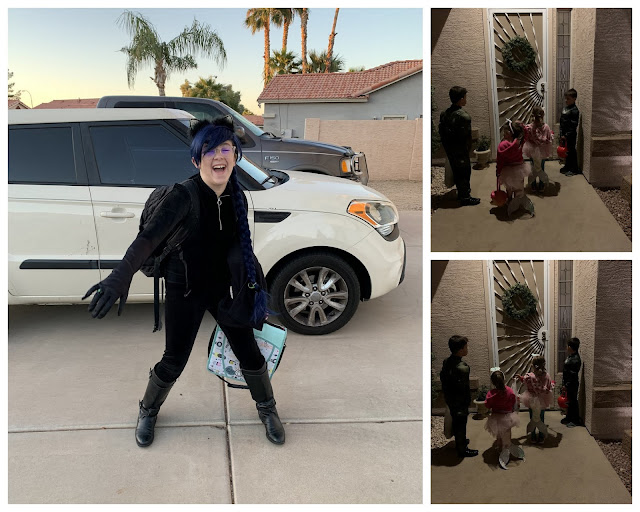 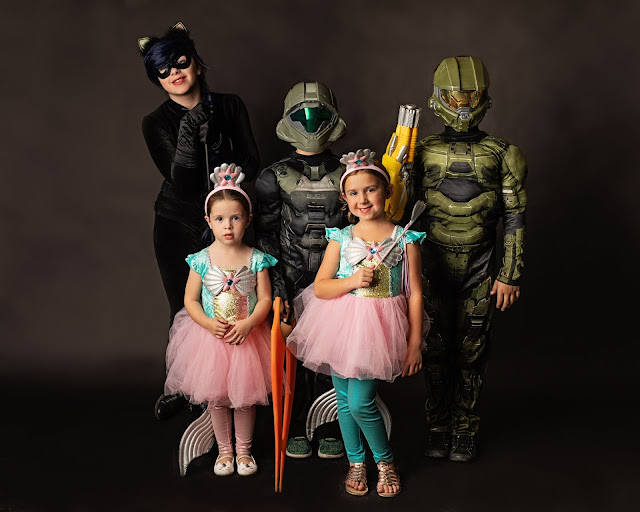 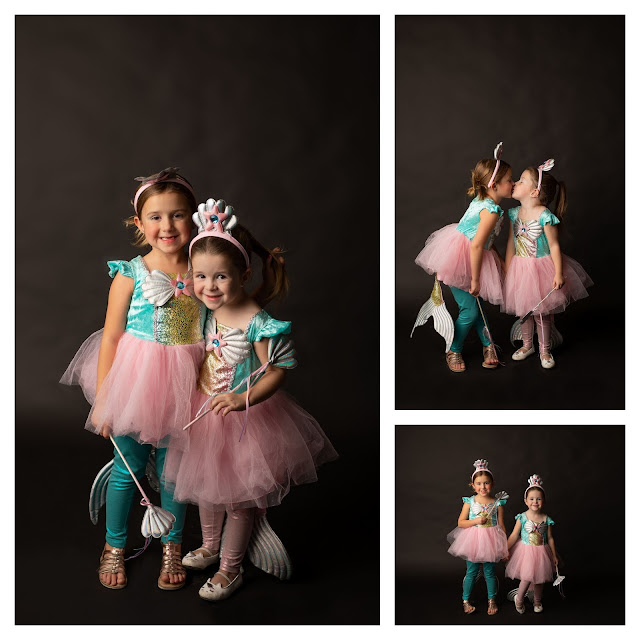 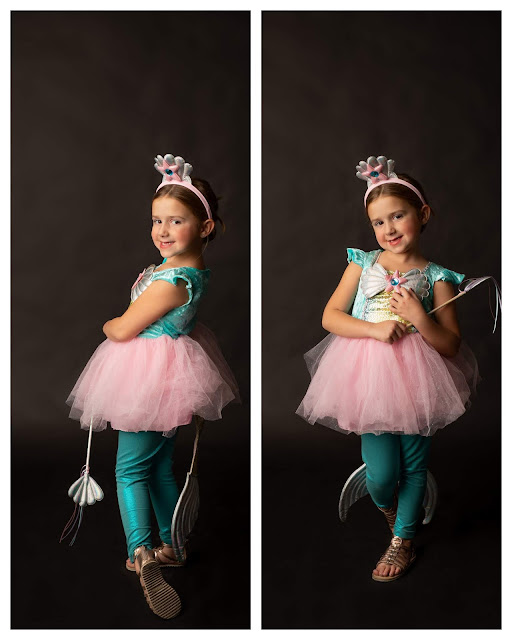 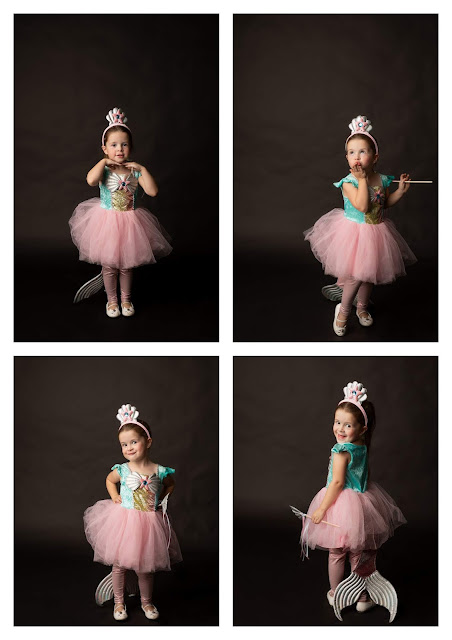 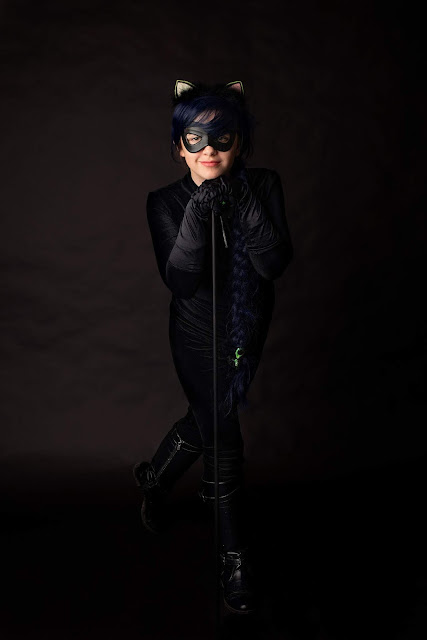 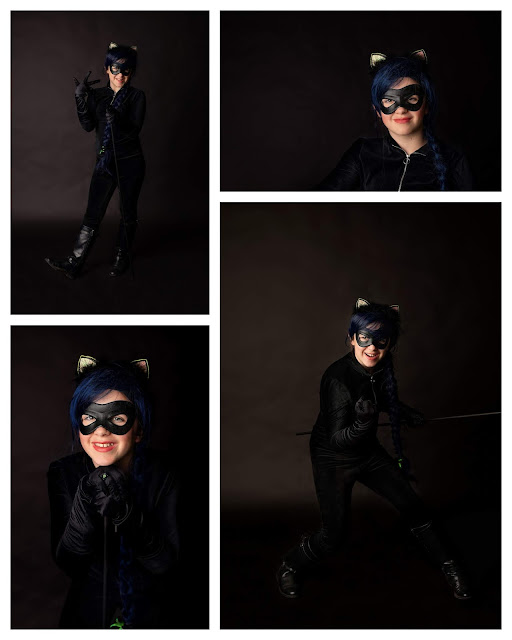 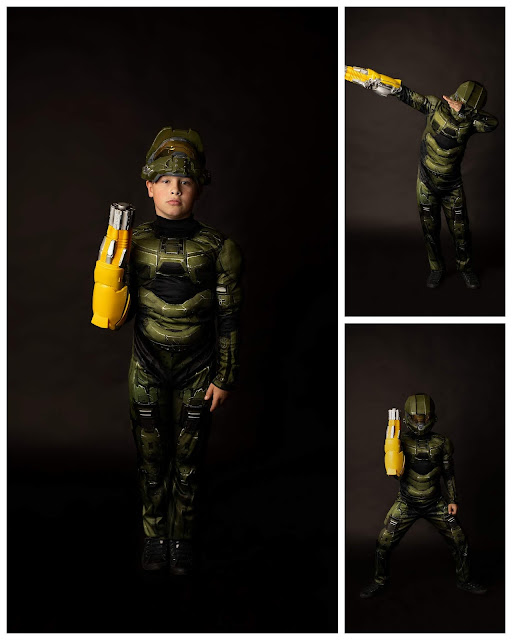 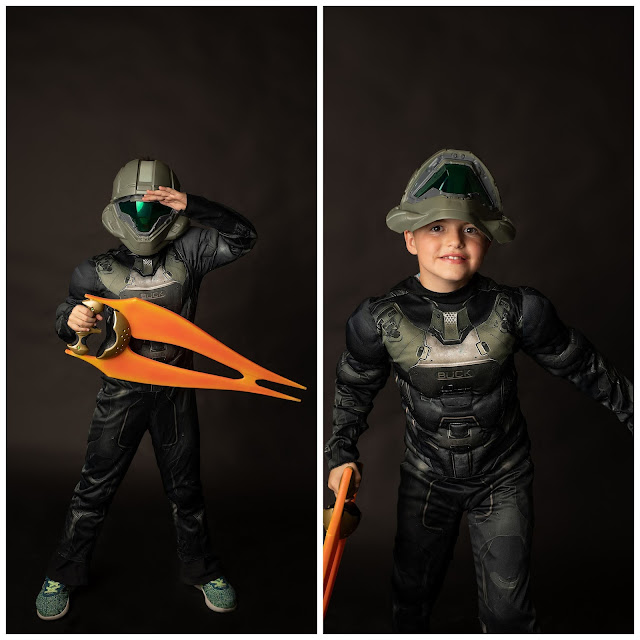 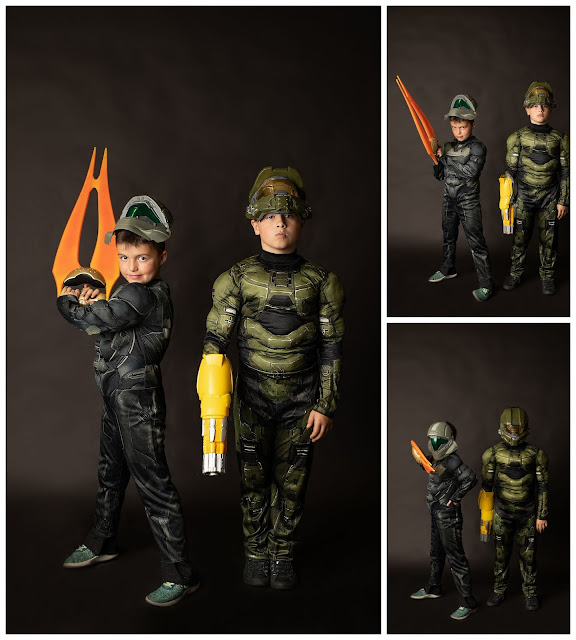 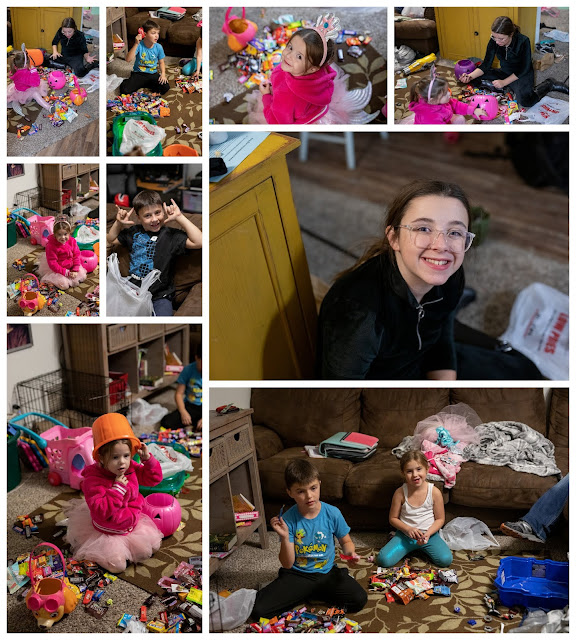 We laid waste to 6 large pumpkins! Went to Walmart for pumpkins at 5:30 and two hours later we had a pile of pumpkin guts and scraps flying all over the kitchen table. The kids had a blast designing their creations and doing their best to cut out their designs. Mia and Chloe carved BFF pumpkins, Phillip had his usual special creation with farts and stuff, Ronald mostly got frustrated, I helped Evelyn carve a sleeping unicorn face, and Josie wanted a silly face pumpkin. Oh yes, Josie was laughing her head off when she chose her pumpkin. She found a pumpkin with a butt on one side, I tried to steer her to another pumpkin but that misshapen gourd caught her fancy. I caught her singing a bum-bum song to her pumpkin. Justin arrived home in time to assist a couple kids on the carving portion. Two days later the pumpkins were oozing and growing mold. Traditions are tradition!

Tuesday early, early morning Phillip came down with croup. He and I were going between freezer air and hot water in the sink to clear out his airways. That took an hour of hot/cold treatment, breathing treatment, and breathe oils. He slept until well after 10 am that morning, even slept through the garage door opening and closing multiple times. Little person spewed his germs everywhere, wiping his boogers, spraying cough germs all over the place, he was not selective at all. He lost the towel I gave him to cough into about 10 times. It's no wonder the rest of us caught his nasty cough.

Phillip's grade performed a Spooky selection of songs for Halloween. The kids all dressed up in  Halloween costumes. Mrs Munley had the kids do a little play acting this time, the kids were all part of a ghost-busting squad trying to catch the Purple People Eater! Josie and Everett wanted to dress up as well just for the fun of it, Josie went as Elsa! Phillip got to be the telephone operator at one point in the concert! He quite enjoyed the action. Seemed like all the kids either had a speaking or solo singing part.

Thursday was of course a busy, busy day. I was on double duty carpooling that entire week, most of the time only morning or afternoon. Amelia got her costume on for school, she could wear it if she paid $2 or donated canned food. The boys wore their costumes for Sonoma Ranch's costume parade. Josie and I rushed between dropping off kids and trying to make the parade. We got there with just a couple minutes to spare. Josie loved watching all the kids parade by wearing costumes. Our favorite costume was a girl wearing a horse contraption, looked like she was actually a full-sized horse. Josie especially enjoyed the Princess costumes and the T-Rex blowup ones. I had to run a couple errands afterwards. Phoenix had a cold spell the high for Thursday was only 70 something, I had to run out and get long-sleeved shirts for the girls. After looking at Target I headed home, on the drive home I realized my phone was missing. Instead of grabbing both my phone and wallet, I only got my wallet. I ran back to Target but could not find my phone. I filed a report at Target and left Justin's phone number. Back at home I logged into "find my iPhone" saw my phone traveling towards the inner parts of Mesa stopping here and there, mostly Mexican marts and medical offices. I went back to Target after Josie went down for her nap. A very helpful security guard tracked down the individual who picked up my phone and logged the information. The lady who took it (out of kindness) eventually called Justin's number. I was able to text her and coordinate a time to pick up the phone. At 4 pm I headed back to Target to wait for the lady who never showed up. That was a stressful hour of waiting, knowing the kids were anxious to go party and eat dinner. Justin finally texted her in Spanish and was able to coordinate times and places. He met up with her back at the same Target on his way home from work. I picked up $.50 corndogs for a quick dinner at Sonic. The kids had done their best with costumes. Amelia put on makeup for the girls! I took a couple photos then we were off to the block party. I was asked to do face painting at one booth. I was so stressed out and without my phone to help me paint designs that we ended up putting that table away. Amelia looked so awesome in her costume! She really thought out each part of her costume and either made it or enlisted my help. At one point I noticed Everett watching the movie with a pile of candy by him. I asked where his bucket was, he answered, "I lost my bucket and candy so I played that game over there to get some candy in case I never find my bucket!" What?! What kid loses a bucket of candy? I snooped around the street and finally found his bucket under a table where a matching game was played. Justin came halfway through the party with my phone in hand. Phew, that was a huge fiasco just because of my inattentiveness. Ronald wandered away from the party with a bunch of school friends his age to trick or treat around the other streets. His parents and I were quite frantic looking around for him. Brother Payne (a police officer) finally found him two streets away calmly gathering candy. Drama! We walked around our neighborhood to finish out the night. Only a few houses actually had porch lights on. Our group was the first to trick or treat our street at 8:30 pm. Most houses gave each kid handfuls of candy just to get rid of their stashes. The kids were thrilled! At home the great candy trading and sorting game ensued. The dislike pile had Snickers and Heath bars, I acquired all the Baby Ruth bars and a couple Almond Joy. The kids enjoyed their candy for a day or two then forgot about their bags.

Woke up Friday with a bunch of grouchy kids! The teachers had quite a handful of hyper and grouches for that school day.

Saturday I had a couple photo sessions. My first appointment was a set of 1 year old twins. Phew, we adults were all sweating as we attempted to get the littles to cooperate. Took some elbow grease but we got some really cute shots. I was glad these sessions were close by at the Riparian. I got a couple fragmented texts from Justin and Mia about dinner prep...after 6 pm. I came home to the oven on, some cucumbers chopped up, and frozen gyro meat. At one point Amelia texted me, "Ugh! Men!" after Justin couldn't find the meat in the freezer. I died! Laughter for days. We did not starve but did eat a lovely late dinner after 7 pm.

Sunday we had our monthly Call dinner. I had to prep big time before church this time, cheesy potatoes and a baked chicken. During our class I quietly asked Justin to text Mia to ask if she'd flipped the chicken. Well, she texted back that flipping the chicken was way too hard for her. We were all laughing, since my comments were clearly not quiet enough. She did her best! Flipping those chickens is not easy. Dinner was delicious. Laura made Cold Stone style ice cream using the kid's Halloween candy. Yum. The boys were so funny to observe, they have the best time together.