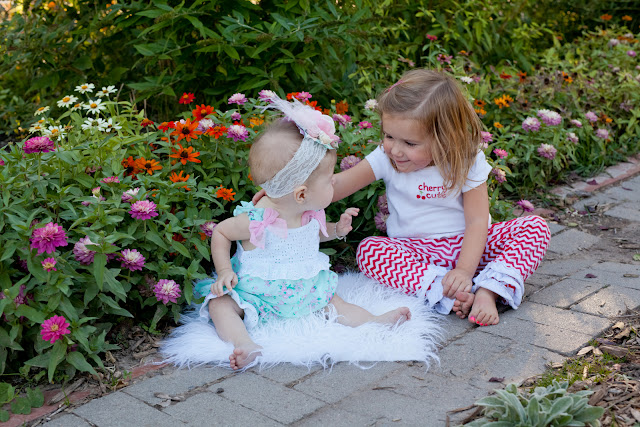 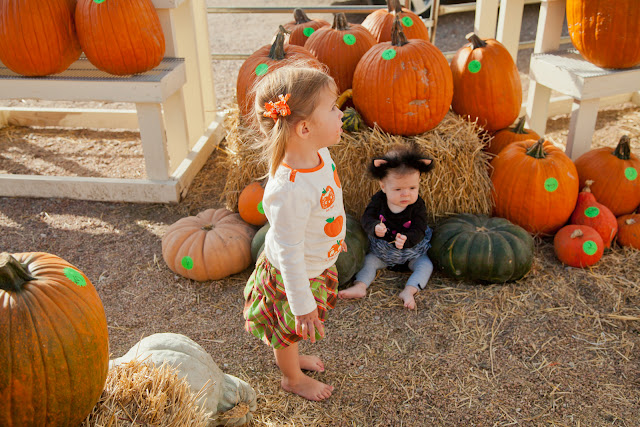 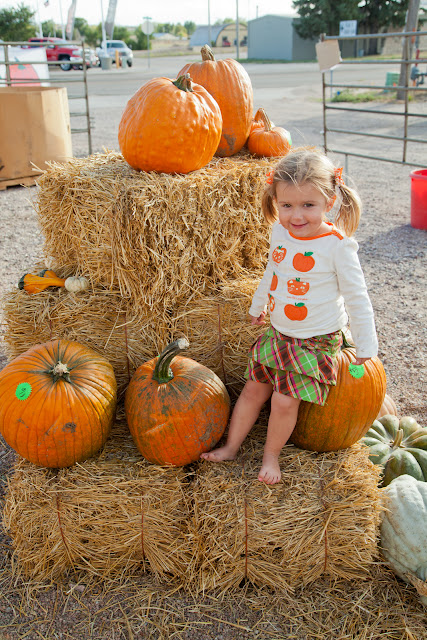 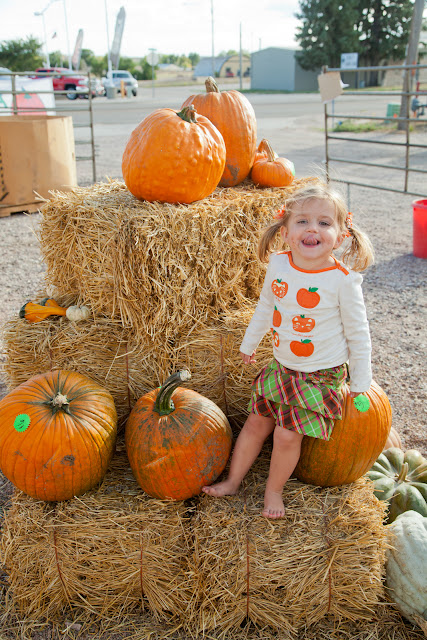 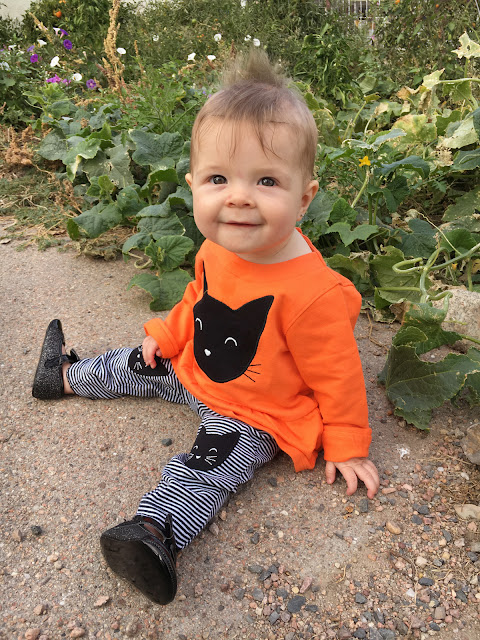 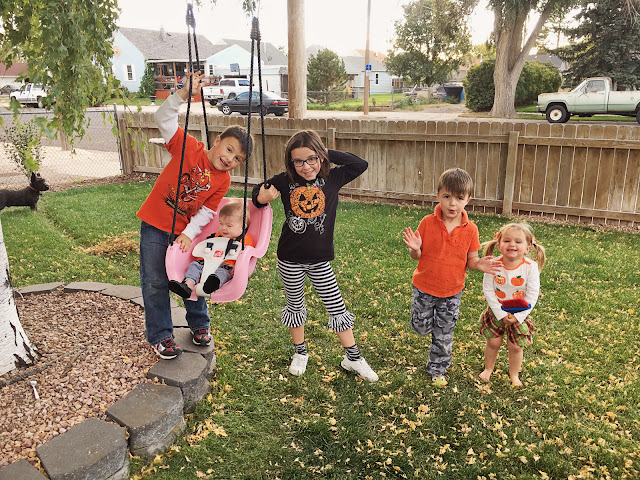 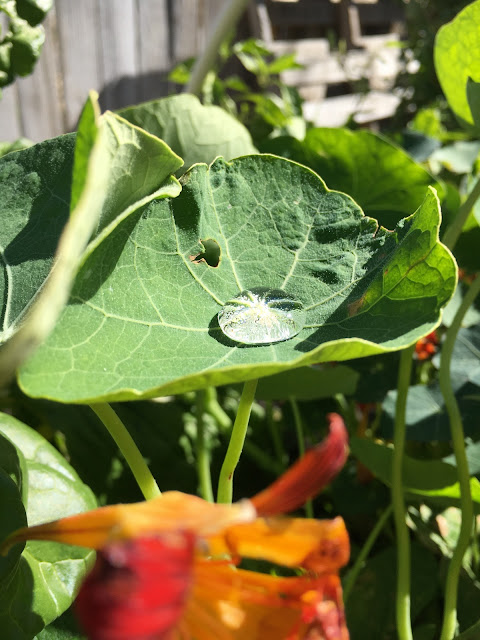 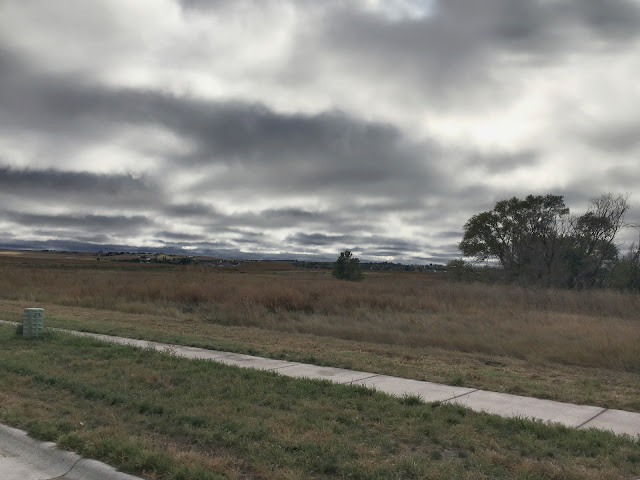 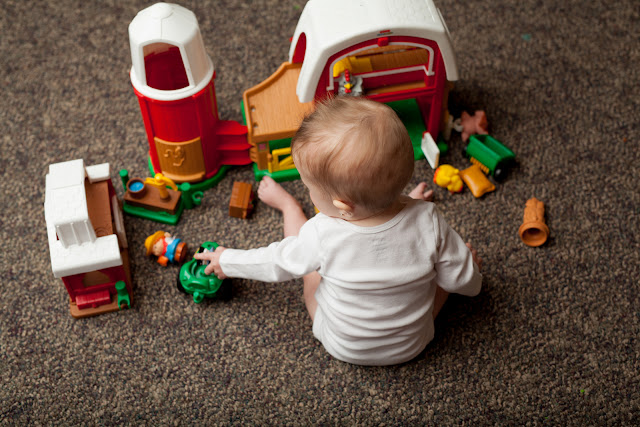 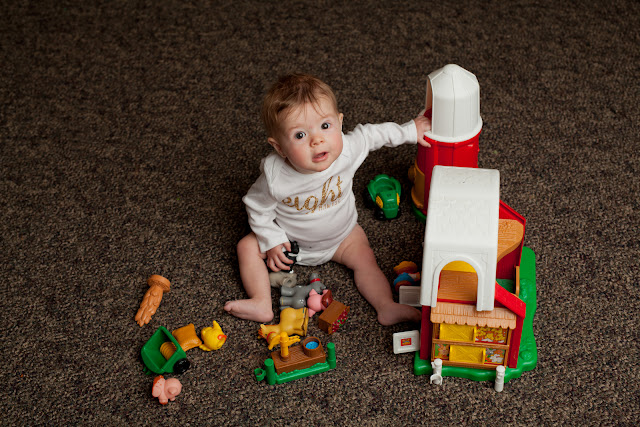 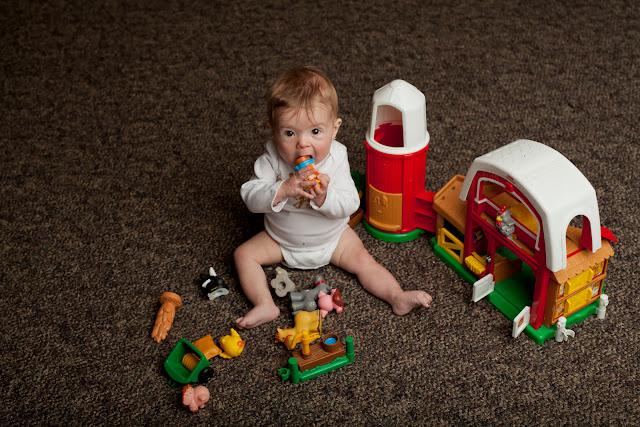 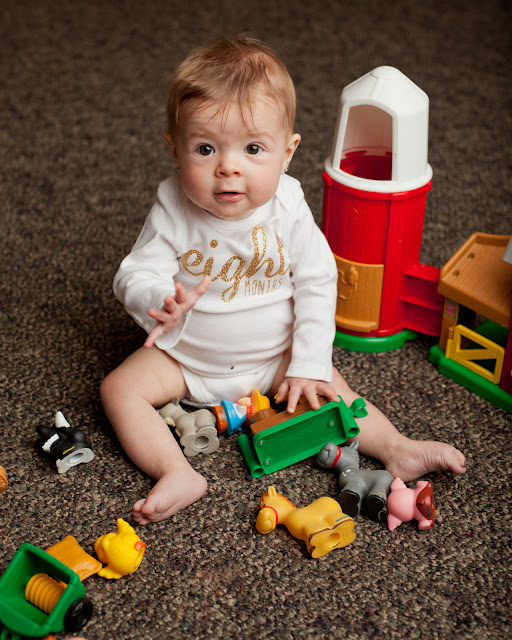 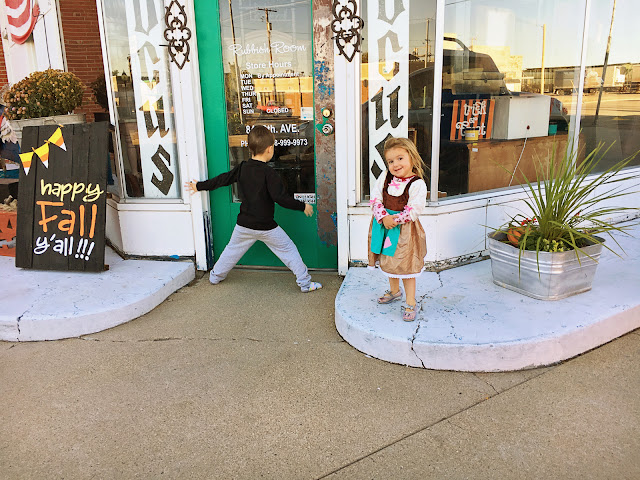 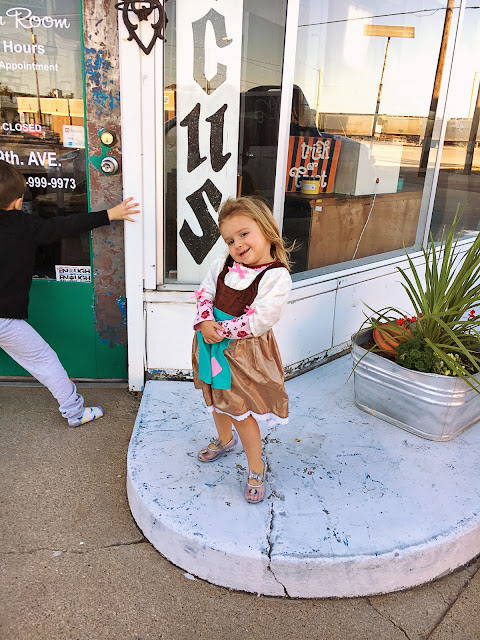 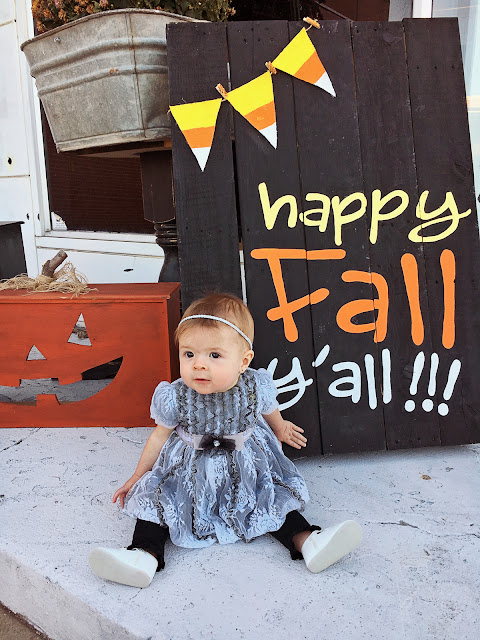 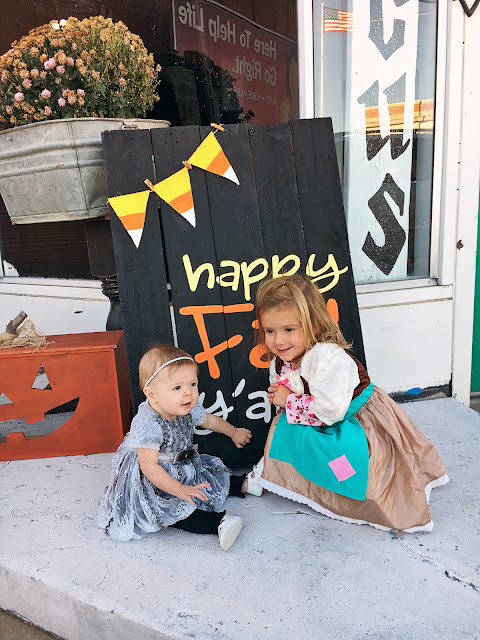 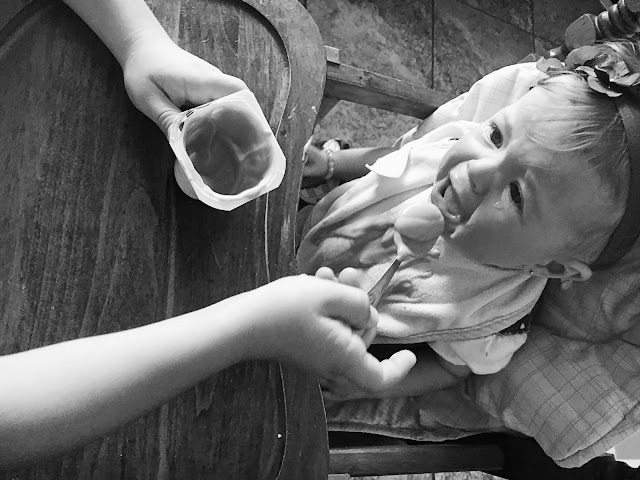 We had a cold day this week! I broke out the soup and scones for dinner on Thursday. It felt so right after a rainy day. Except for Thursday our weather is hovering right around the mid-70s. Gotta love perfection! The little girls and I enjoy spending time in the side yard swinging, digging in the garden, and playing with lady bugs. We have an unfortunate infestation of hornets in the side yard this fall. Seems like the hornets are numerous all over our area as well. I can't find hornet killer stuff locally.

Monday morning Justin read the press release that Bass Pro is indeed buying out Cabela's. The news finally came from credible sources. We don't have much information since the merger was announced. Seems like the deal will happen anywhere from 4 months to a year from now. Bass Pro will acquire Cabela's for an approximate 5.5 billion dollars. While Bass Pro promises to respect the "deep ties" between Sidney and Cabela's we are all wondering what that means. The executives of the company stand to make millions and millions after the sale is completed. Makes our hearts heavy thinking about those who benefit from selling. Alas, business is business. The company was lost the moment it went from private to a publicly traded company several years ago.  It is quite hard not to worry our heads off. We worry especially about the housing market. Already there are over 100 homes up for sale in a town of 6,800 folks. The percentage of homes up for sale per capita is quite deviant for a town our size. We worry about Bass Pro offering jobs to employees at Cabela's. We worry about headquarters moving to Missouri. We worry about losing health insurance with a daughter who needs another surgery, about moving away from her primary doctor. Worrying, I used that word quite a bit. I guess deep down I don't feel worried. I feel concerned but at the same time feel positive that God is over all. This ward was promised on it's creation that there would always be a presence of the church in Sidney. I guess time will tell. Justin says emotions are high at work. Lots of crying and wailing!

Monday I had a fun conversation with Phillip and Everett. Phillip told Everett that something was a myth. Everett wanted to know what a myth was, so I gave him several examples. Hey Everett: is the tooth fairy real or myth (real)? Is Santa real or myth (real)? Is a leprechaun myth or real (myth)? Is the Easter Bunny myth or real (myth)? Phillip pipes up...what about GOD? Myth or real? Everett pipes up He's a real myth. I laughed so hard. Phillip was quite concerned Everett thought God was a myth, he instructed Everett that God was so, so real and he needed to have faith or he might die a sinner. I thought it was hilarious God is on the same level as Santa and the Tooth Fairy.

Tuesday we went to get Temple Dedication recommends from the Bishopric. Justin was intent on interviewing Amelia. I got a simple hello, you have a current recommend?, Indeed!, check, here is your recommend. Then Justin asked me to give a talk Sunday using Elder Ballard's addresses Oct of 2014 and 2015 on the Old Ship Zion. Sneaky, sneaky. Last time I spoke was about a year after we moved into the ward. I enjoy speaking, so the thought was quite invigorating.

Josie is now 8 months old. She learned to clap this week. She is pleased at punch when she claps at herself. She is a quiet, gentle soul. She loves to be held and admire the world from my arms. I enjoy how Josie and Evelyn are becoming friends lately. Evelyn shares some of her precious things with Josie. We sure love her little personality.

We cleaned the church Thursday evening. All the kids helped clean up. The boys dumped the trashes, Amelia cleaned some classrooms and vacuumed. Evelyn spent the evening borrowing cleaning tools and supplies and did what she does best! She helped me clean the toilet bowls with a duster and mop. The boys went to gymnastics at 7, the rest of cleaned until 8. We finished just a few minutes before 8 pm so the timing was perfect. This week I plan on going back to help clean the church for the Ft Collin's Temple dedication. Three dedication sessions will be broadcast at our building, essentially the chapel will become an extension of the temple so we need to spiff it up a bit. I will go get some pumice stones to scour the gross water stains in the toilets. Evelyn serenaded me with cute off-key renditions of I am a Child of God. She loves to sing.

Wednesday the kids lost electronic privileges for Friday because they disobeyed me. I took Evelyn to ballet while the kids stayed home to get started on homework. Instead they dorked around, got bored, and then snuck turns in the iPad and Kindle. I can home to find them oblivious to my presence. I was a bit surprised the kids were not more furtive in their efforts. The next day Amelia stole another few minutes on her Kindle. It quickly disappeared. I am quite enjoying our electronic free afternoons and evenings. Our new favorite game is called Slamwich. I play it several times each day with Everett, sometimes Amelia and Phillip join in. We also love to play some Lego-based games like Hogwarts and Magikus. I whipped up a huge batch of playdough on Friday. The kids played with that off and on over the weekend. Right after Evelyn helped me knead the colors into the dough, she mixed all the playdough together and twisted it up. Gah! I was only able to separate out four of the 9 colors. Evelyn happily dabbled with the dough for the better part of an hour. She is doing much better controlling her temper. If I mention time out in the carseat she usually sobers up and apologizes, cleans up, or tries to rectify her mistake(s). She still has her tantrums but as of now not as drawn out.

Friday the mailman delivered a special mailer to our door. Evelyn pranced around shouting, "it's my birthday!!!" We opened it up. Two beautiful Princess Cinderella dressed spilled to the floor. Evelyn scooped up the pretty dresses and danced around yelling, "I love it, beautiful, so pretty!!!" I think she liked the dresses. Thanks to Aunt Courtenay for doing a little shopping in Utah for me. She wore the Cinderella work dress all day long.

A couple weeks ago one of my long-time customers handed me a petition for mini-sessions with 12 signatures on it. Apparently, several customers were quite put out over my retirement. I went ahead and did 9 mini sessions this weekend. No more, no less. Two of the ladies will take my kids several mornings this week for free so I will have time to edit without worrying about them. The "nope" is back. That's it. I only took sessions of those families I've taken photos of for more than 5 years. Yes, I am justifying. How does it sound? I earned enough to cover Christmas...or to replenish our year supply.

Saturday was a gorgeous day. While I worked on the morning mini sessions Justin spent a couple hours at the park with the kids. I could hear the kids whooping along as they sped by on their bikes every so often. Amelia had a long playdate with Katelyn over to our home for the afternoon. The girls disappeared into her room to play, do pedicures, and the mysteries of pre-teen girl stuff. Phillip was quite intrigued and kept trying to interrupt their play date. It's good for them to get interrupted by annoying brothers.

Justin sat with the kids while I spoke in church. I think that was the best part, standing alone at the pulpit with the spirit in my heart. The spirit was strong. It was even stronger during Sunday School's lesson on Parables. We talked about the parable of the Prodigal Son, I related how I connect with the older brother, how he felt over looked and over shadowed. Sometimes I feel like I am a shadow worker, pulling strings and making things work. My heart grumbles sometimes over the tedious work. Yet, when I ask God why I am the one stuck being good and steady with no seeming reward, His answer is always: Oh my child, you misunderstand, you already have it all, just look around you. Your steadiness has already reaped your reward. Be glad your "brother" has a chance to earn the same salvation. I love how poignant that parable is.