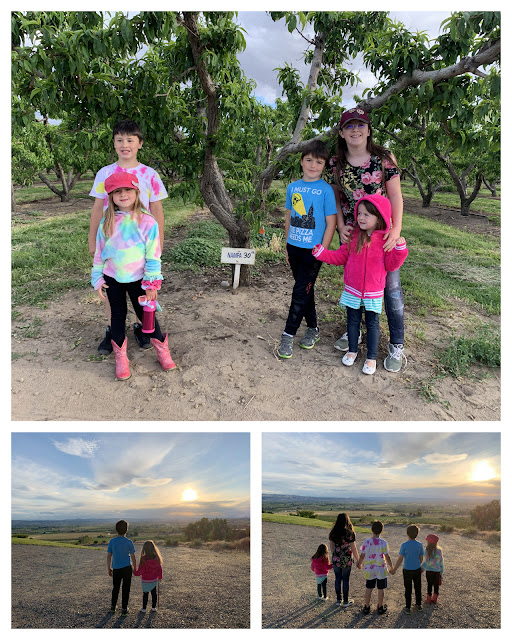 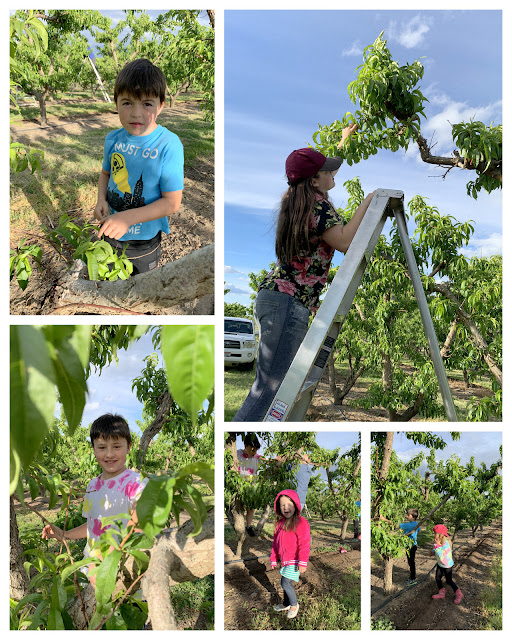 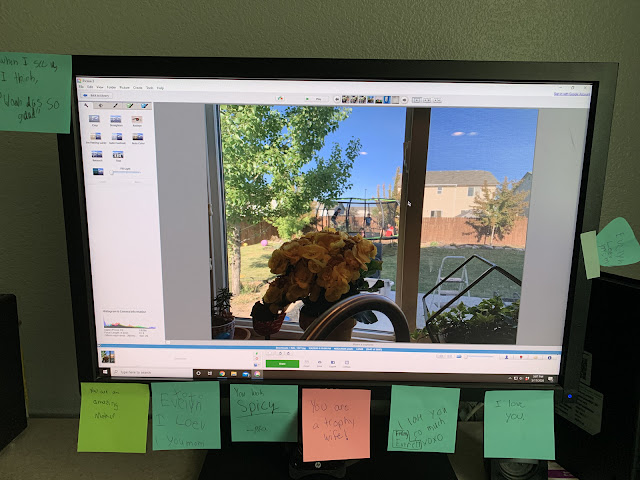 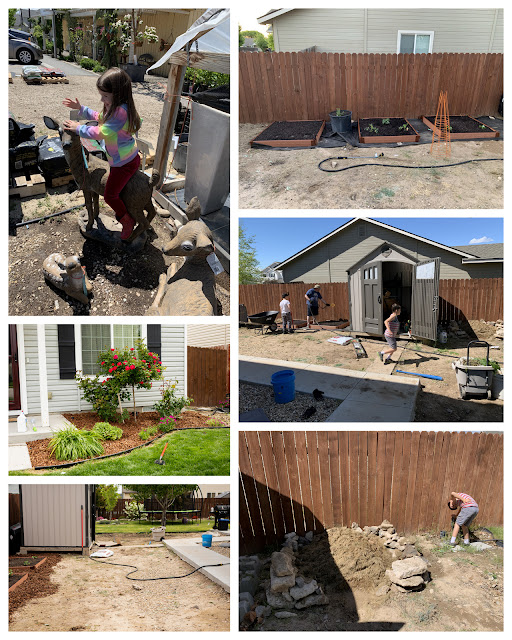 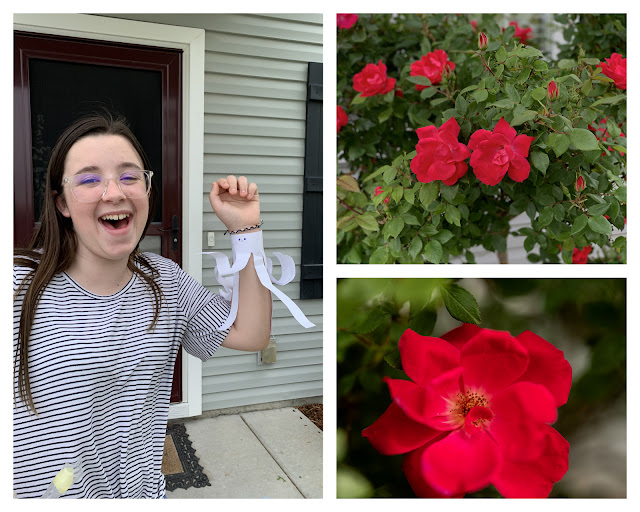 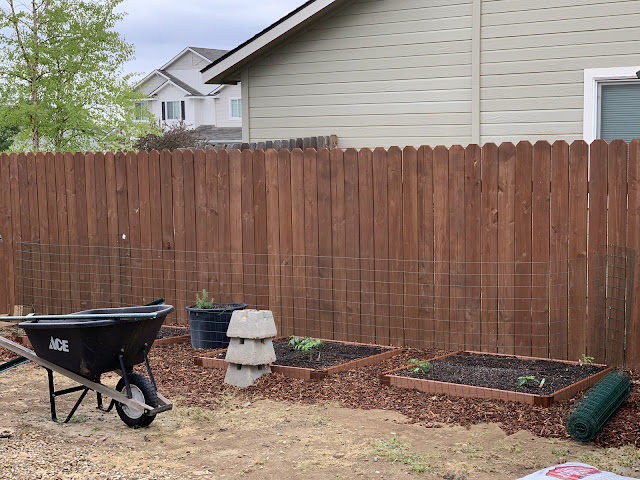 Justin and I stole away for a mid-week date to Lowes for garden boxes, a snake plant, and stuff to plant in a front porch planter. We even walked away with a new ceiling fan and light for the main living area. The silence was ever so pleasant. Justin even treated me to a double-dipped butterscotch cone at DQ.

Justin signed us up for a ward service project working in the church peach orchard on Wednesday. I was not so sure I wanted to drive 45 minutes just to herd kids. Justin was not able to make it due to some changes and hang-ups for the most recent filing. We arrived about 10 minutes before the project was to start. The drive up was gorgeous! We hugged the shore of a large lake, the banks teaming with trees, bushes, and flowers of all sorts. I am reading "Freckles" to the boys right now so the scenery lent some framework for our imaginations. The lake front fell away to broad farmlands neatly growing crops. Then came the orchards! Oh my gracious...we passed apple, grape, peach, cherry, apricot, pear, and all fruits in between. The church expects to can 30 million bushels from the peach trees we worked on! Only one older gentleman was there slowly picking through the trees. We surged in to help! Our job was to thin the peaches to one fruit every 3-4 inches. The rest were pinched off to allow the bigger fruit room to grow. Loads more folks arrived around 7:30 in typical LDS timing! Amelia was thrilled to use the ladder for a time to thin the tops of the trees. Our ward had an entire row to work on! We left shortly after 8:15 pm. The best part was the western view as the sunset over an amazingly beautiful valley. I treated the kids to Dairy Queen cones just for kicks and giggles...I was not complaining about two cones in a row.

Justin started a cute note trend. I am not so nice to myself after having 5 kids and the years of raising little kids catching up with my current weight. I hate where I am at right now, but still don't see how I can get out and do what needs to be done exercise wise. Penned with 5 kids is a bit mind-numbing. Justin leaves me sweet notes in the closet, on the bathroom mirror, the bathroom scale, and on my computer screen. The kids swept up the trend and are now leaving me notes! It does my heart good to see all these positive affirmations pasted all over.

Friday Justin only worked a half day so we took the rest of the day to work on our yard. The north side of our house is a mud pit! We picked up a load of raised garden bed soil at a local nursery. First step was to move the compost pile to another location. The kids helped schelp lava rocks to form a border containing the compost. Amelia helped trim trees by removing sucker branches. It took the rest of the day to build the boxes, fill them, and plant seeds. I also picked up some nursery plants like tomatoes to plant from Walmart. Everett really wants to become a gardener now! He mused out loud if he could be an accountant and a gardener at the same time! Everett is my "stick-to-it" guy. He helped me until the last task was done. He got to water the plants as a reward. Grilled chicken never tasted so good as it did after a long day of work. Saturday Justin picked up a yard of wood chips to mulch around the garden boxes. We plan on getting another 6-8 yards of wood chips to cover up the ugly, messy mud. The mulch work went much faster! I had the nursery deliver 4 more yards but they were delayed until Monday morning. It was much nicer to take an afternoon rest after working hard for several days. Both boys are quite proficient lawn mowers. Phillip even earned the privilege to use the blower for a little while! Evelyn is quite taken with Ambery, one of the kids next door! She roped Ambree into playing American Girl dolls, LOL dolls, and Barbies for hours on end over the weekend. Phillip is also quite happy to have Ambree as a friend. Earlier in the week the kids shredded up several boxes playing a rousing game of kitty cats in the trampoline! They even did a good job cleaning up their mess after playing.

Dog Vader chewed up my new tomato plants and stomped all over my new garden boxes. Justin convinced me he would leave them alone...NO!!! Stupid dog traipsed all over, probably peeing on it all. I jerry rigged a fence with some fencing, staples, and some cement blocks lying around. Justin was convinced my plan would fail. It probably will fall over, it just needs to last long enough for things to grow so the dog avoids that area. My Baerwaldt genes were hard at work, I'm sure Grandpa B was giving me pointers from up in heaven. Amelia made an arm octopus, she was sharing her Popsicle with it...we're all a little worried.

Home church is going quite well. We have lots of singing, the sacrament, a short talk and listen to a conference talk most weeks. I might not want to return back! Ha ha. Sunday we went on a brutal stroll down a walking path near our home. Most of the kids almost died, the only one who didn't complain was Evelyn! The path was abundantly gorgeous, patches of wild primroses grew mixed in with raspberry brambles. We even stumbled on a pretty little nature park. My love of beauty was completely filled. Everett had some digestive troubles along the trail. He had to do a squat...we all heard the noises from many, many paces away. Poor guy.