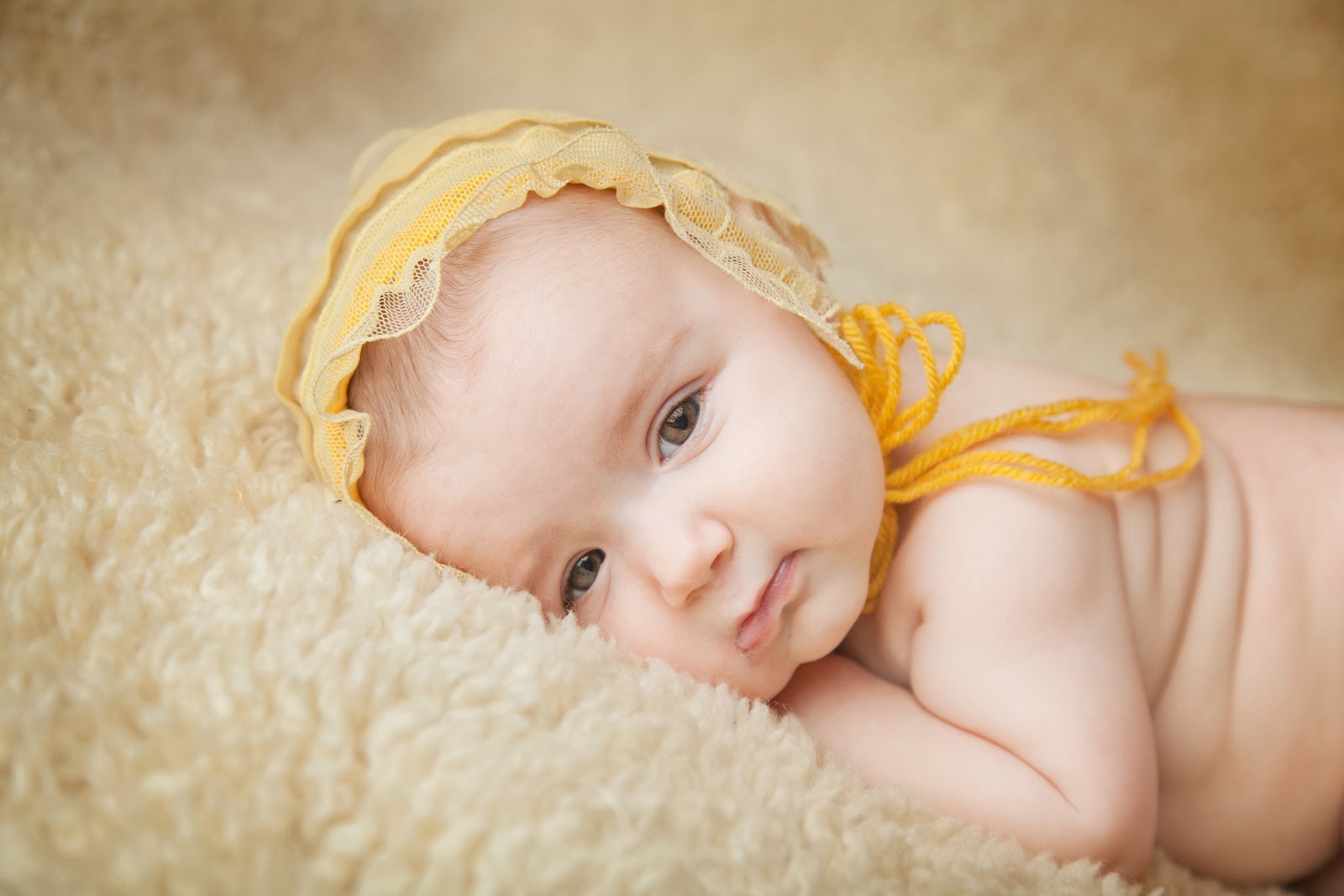 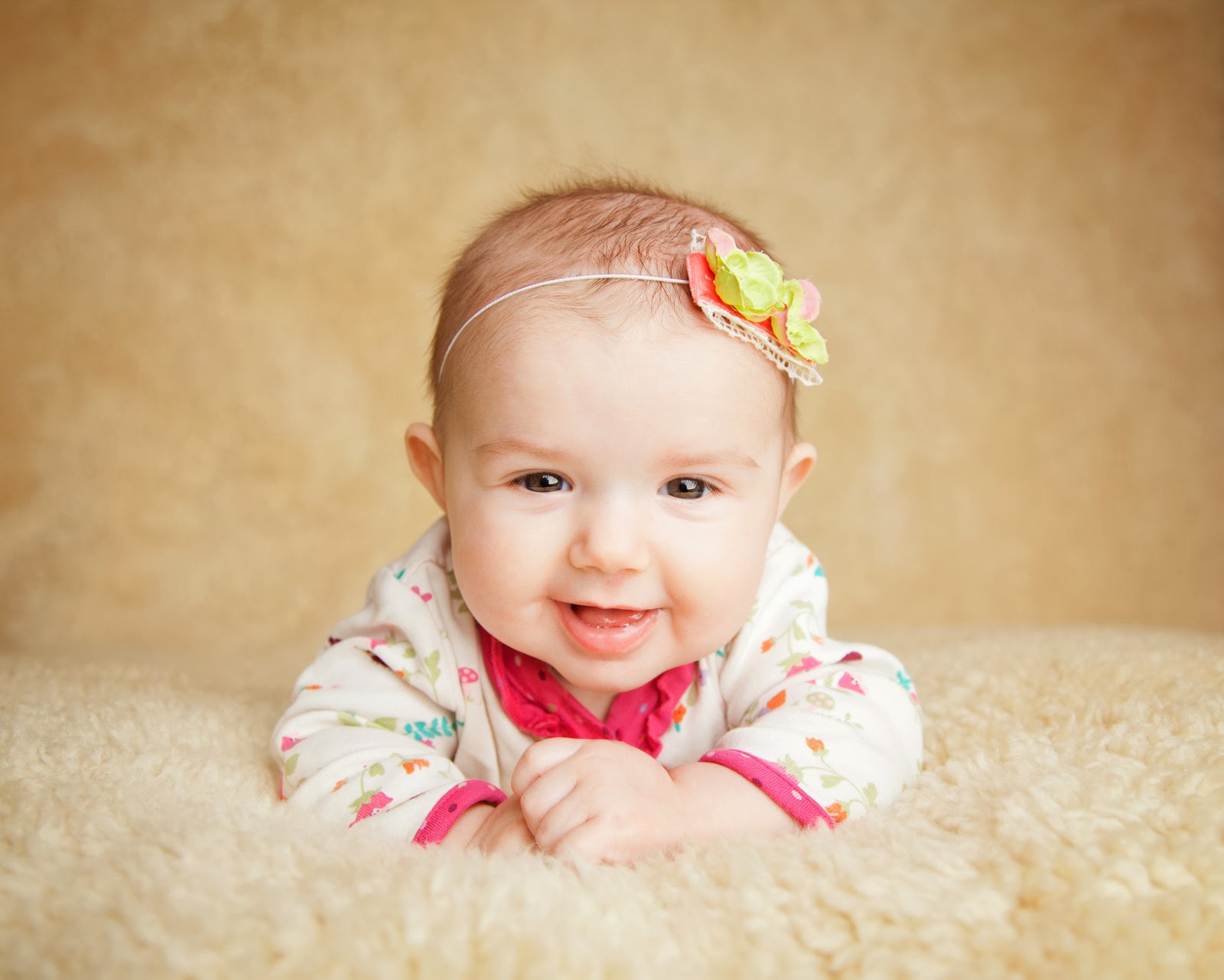 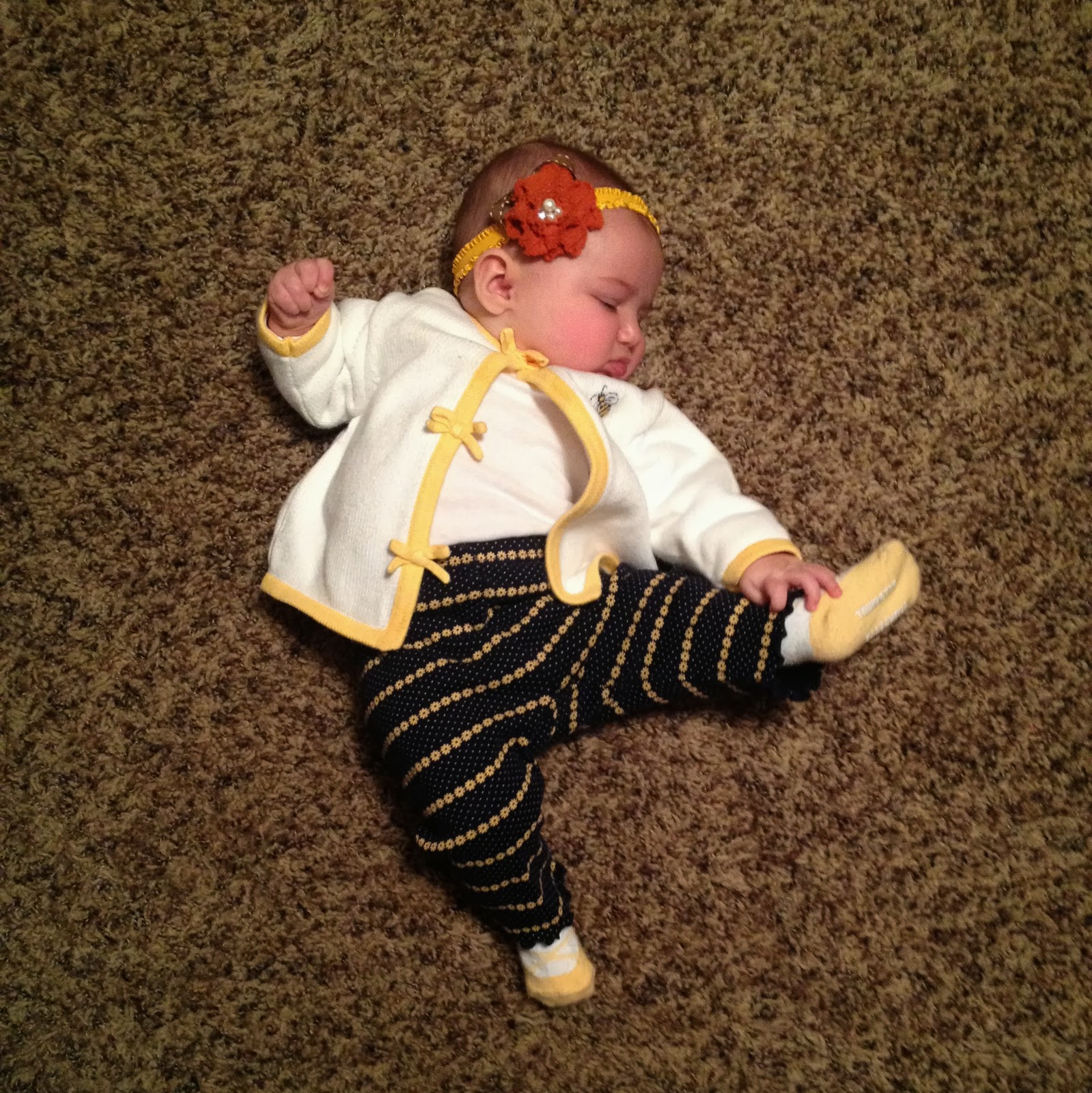 Evelyn had her 4 mth well-child visit on Monday. She is doing perfectly well. Evelyn weighed in at 13lbs 8 oz, that places her in the 34th percentile. I was a little surprised since she seems to be on the chubby side. Her cheeks must weigh half a pound per side! She measured 24.5 inches long, or in the 45th percentile. Just in the past week she met several milestones.

*can now grab her toes. She started reaching for her toes while laying on her side. Two days later she had her legs in the air grabbing her toes. As of today she is not tasting her toes.
*yesterday she rolled onto her tummy
*she also reared up her head and kept it raised for a minute or more! I was worried since most babies do that by 3 months. With her head raise she rolled back to her side.
*blows raspberries when upset. She is constantly spitting now, spit bubbles galore.

I mentioned to Dr Shaw that Evelyn favors her left side. She rarely looks to the other side and always rolls to one side, favors one fist, etc. Dr Shaw sent me to the Physical Therapist to get her neck muscles looked at. The PT said her neck muscles are equal and she can perform the necessary movements like looking side to side when enticed. She just favors the left. The PT gave me some exercises to do and advised me to continue helping Evelyn try out her right side.
I finally moved Evelyn into her room for napping and at night. The convenience of her sleeping right next to me is hard to argue. She was restless for a couple nights and still wakes up between 5:30 and 6:30 wanting her binky (several times). She is pretty amazing. Love my serious little lady. 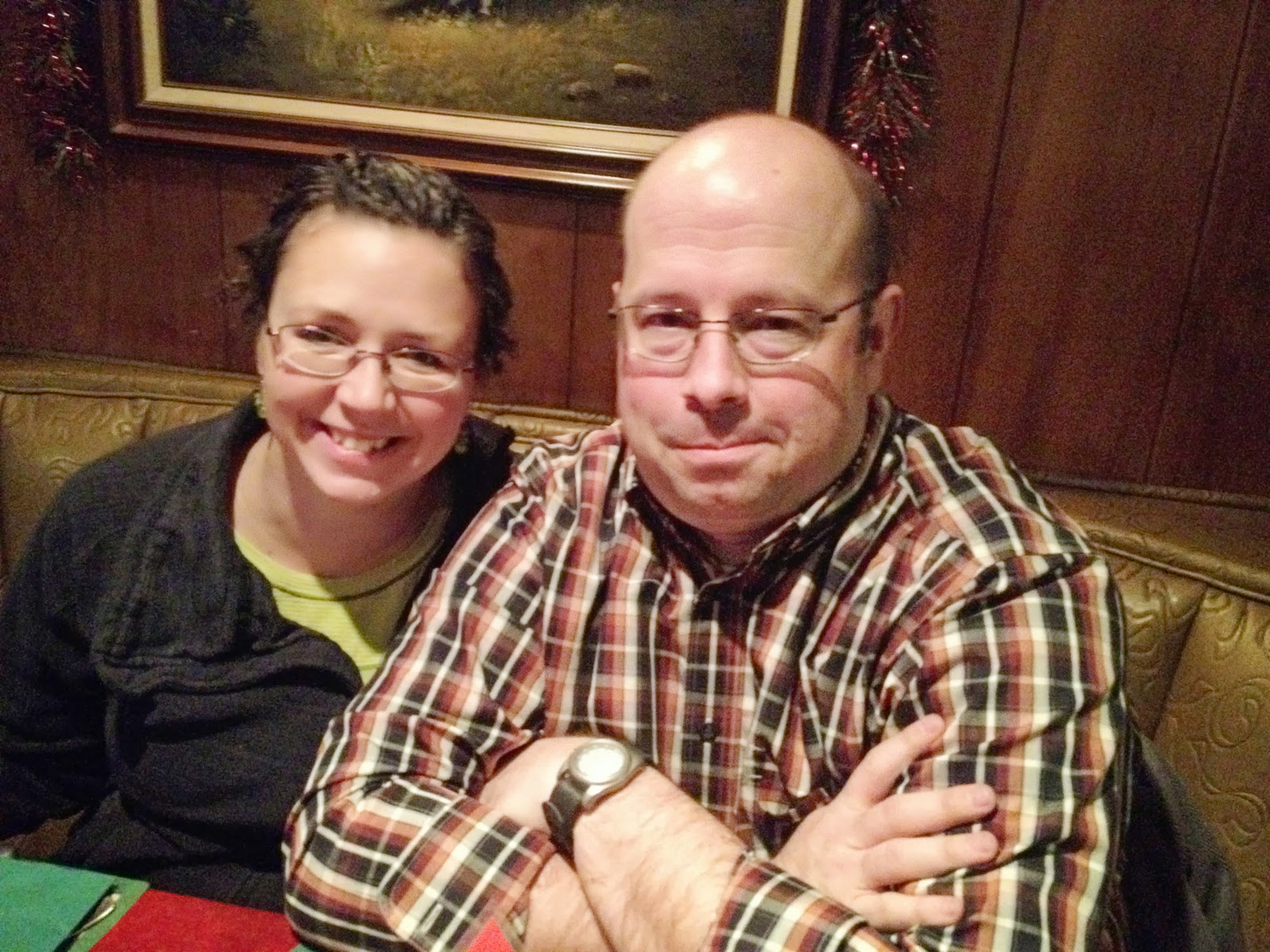 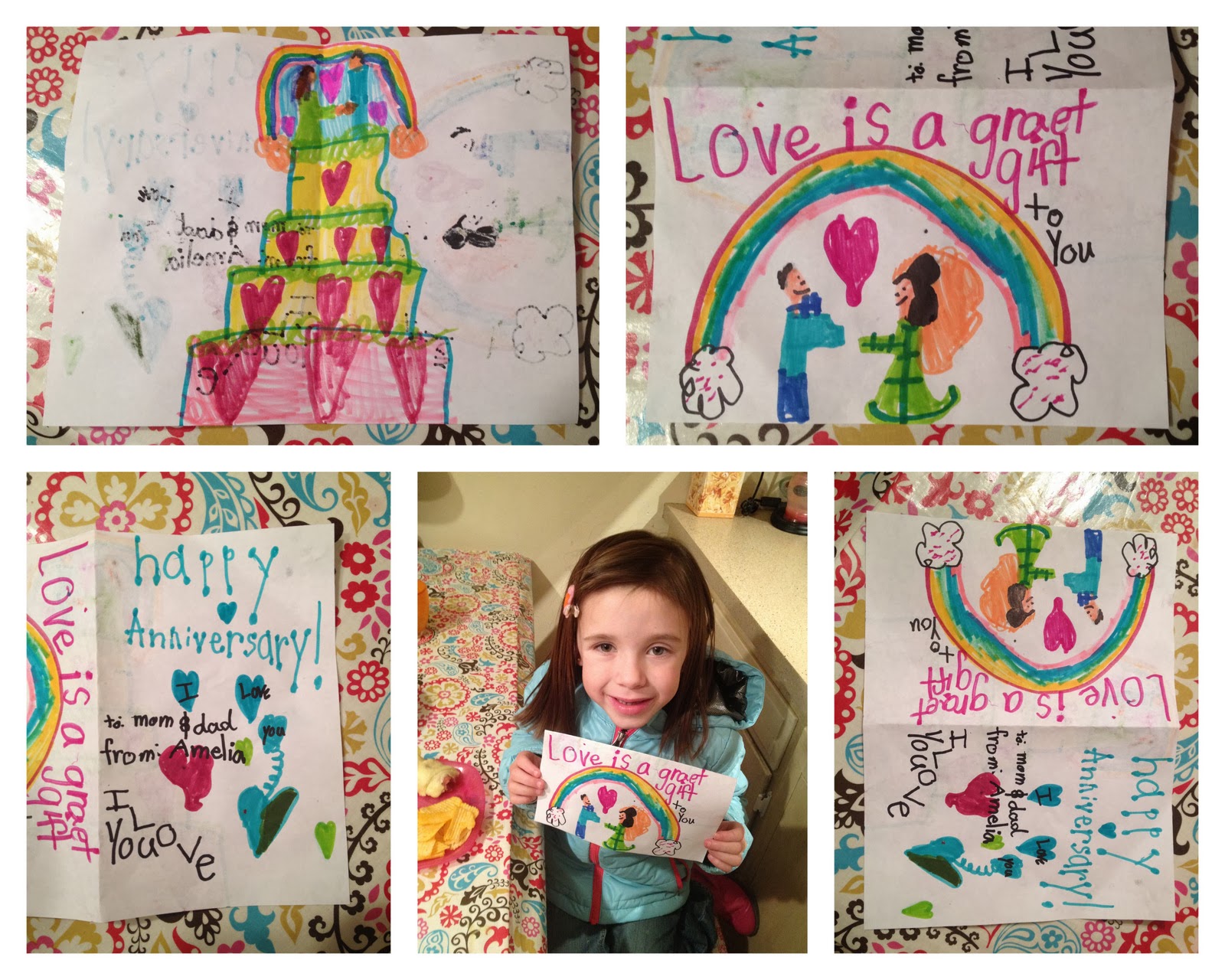 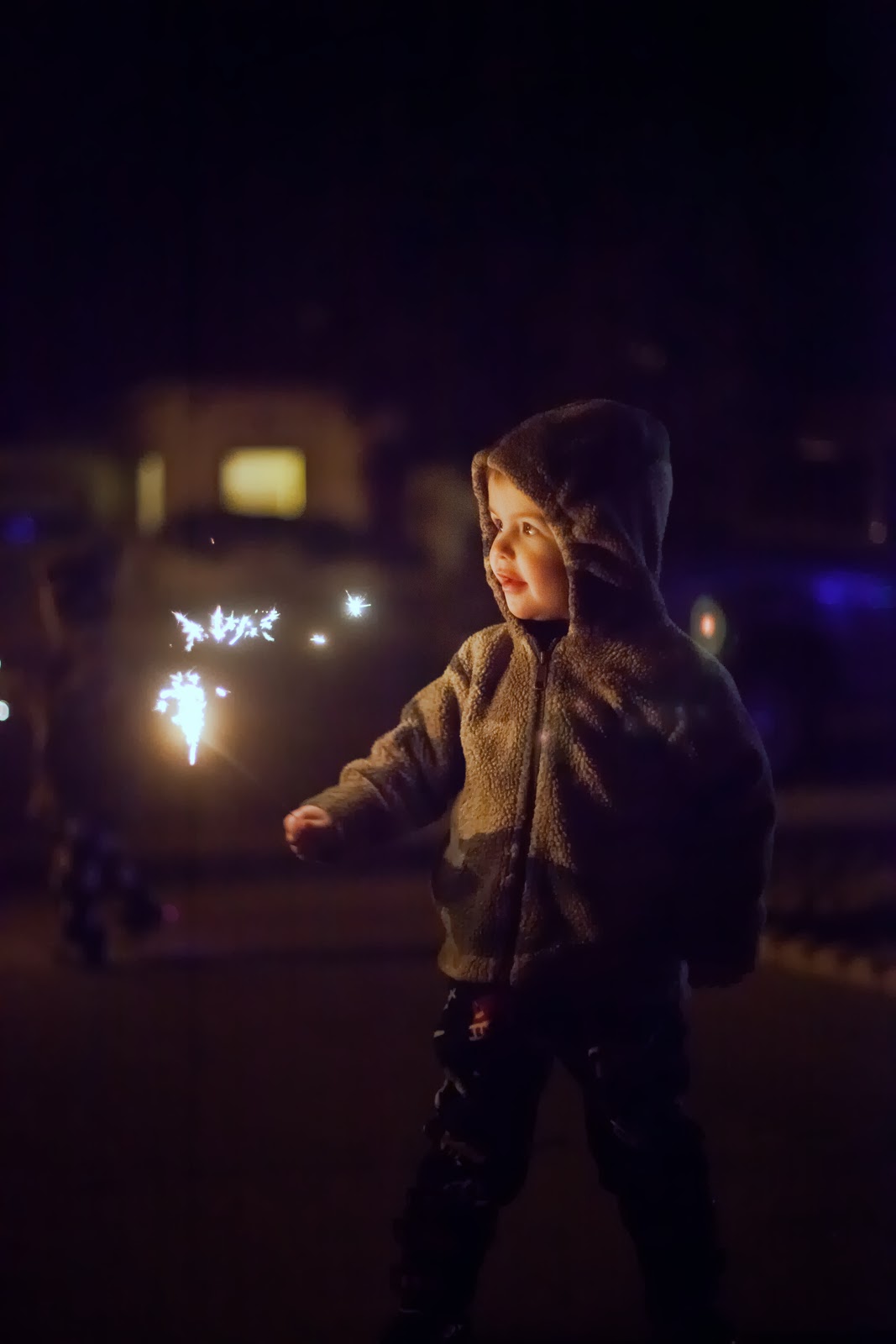 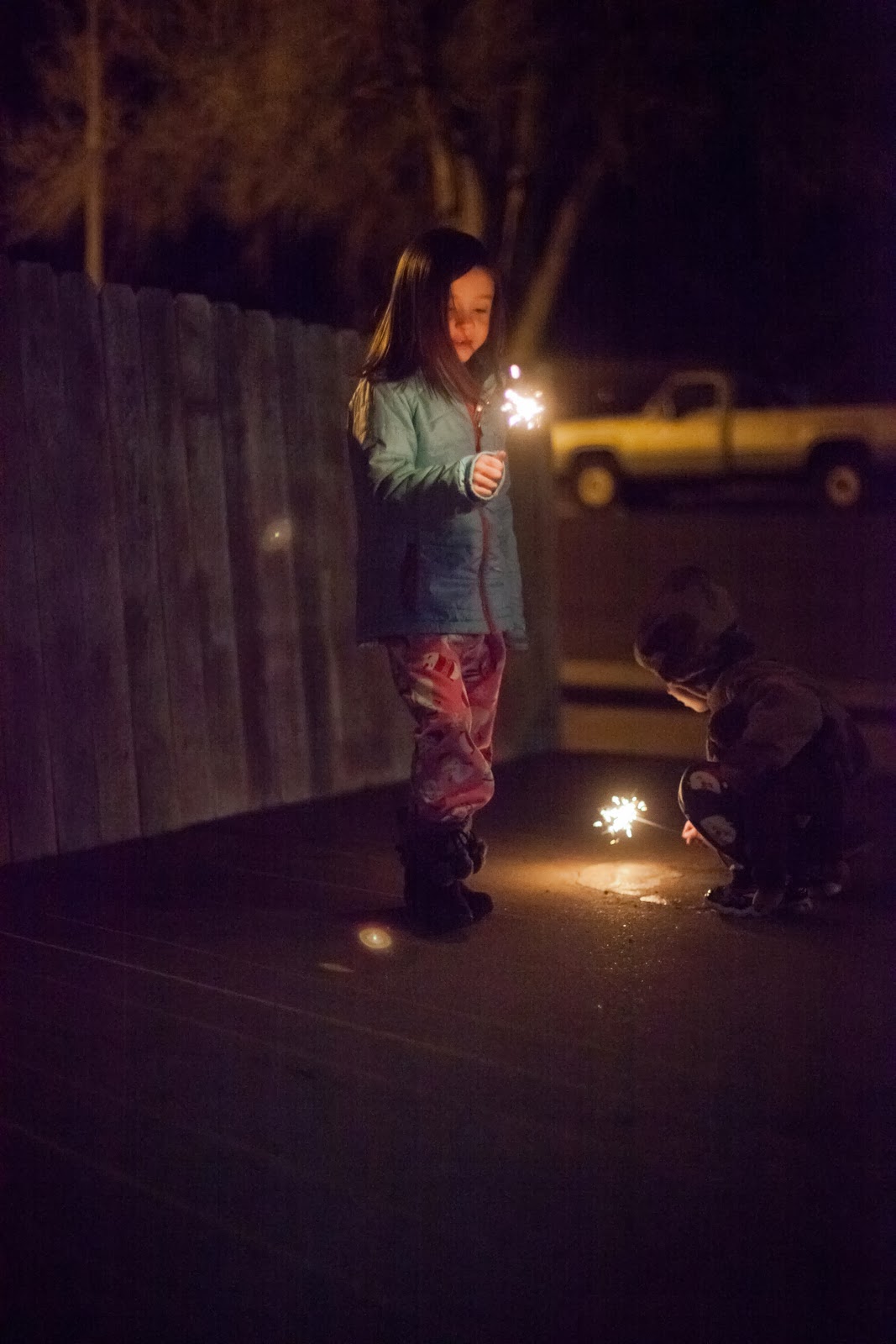 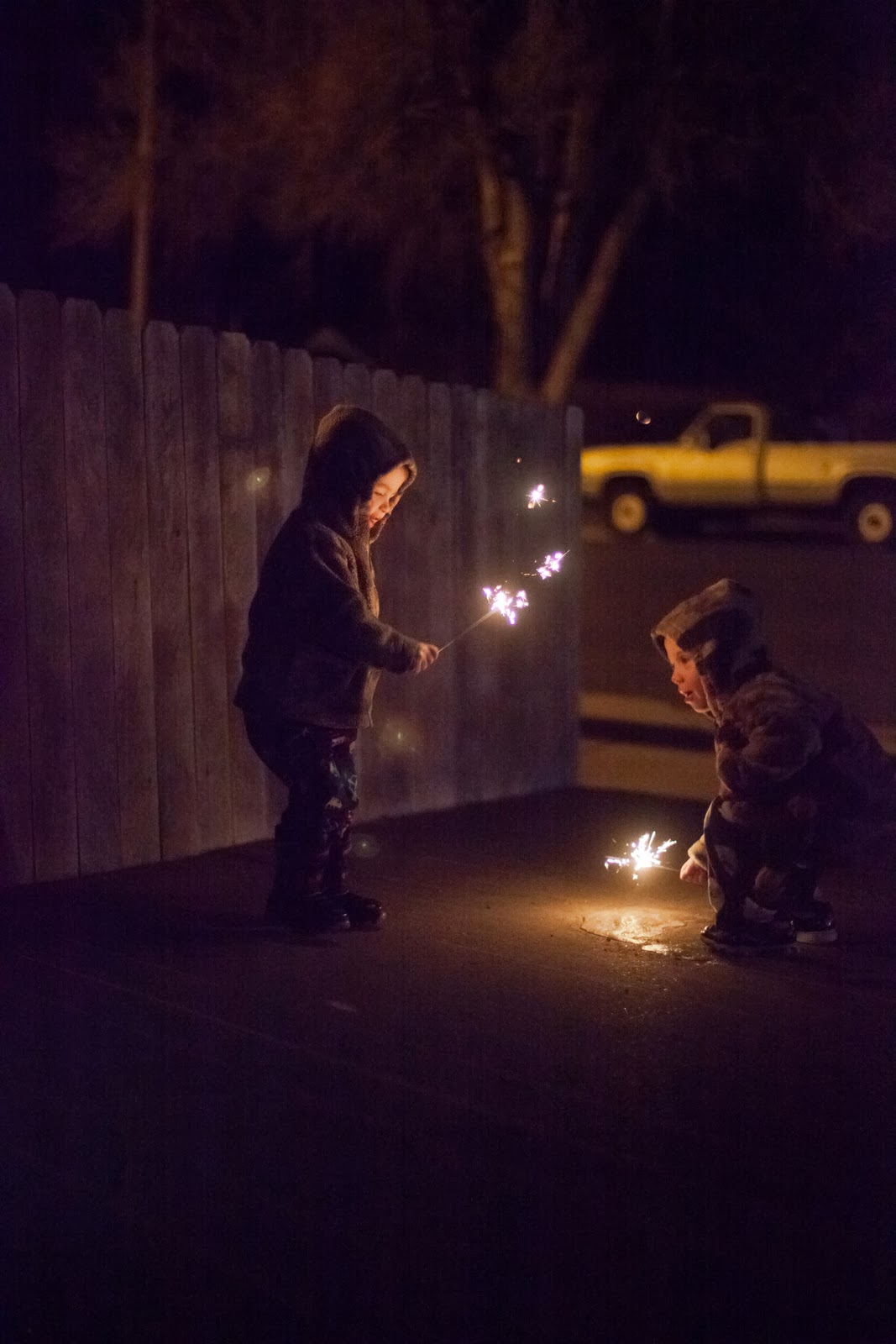 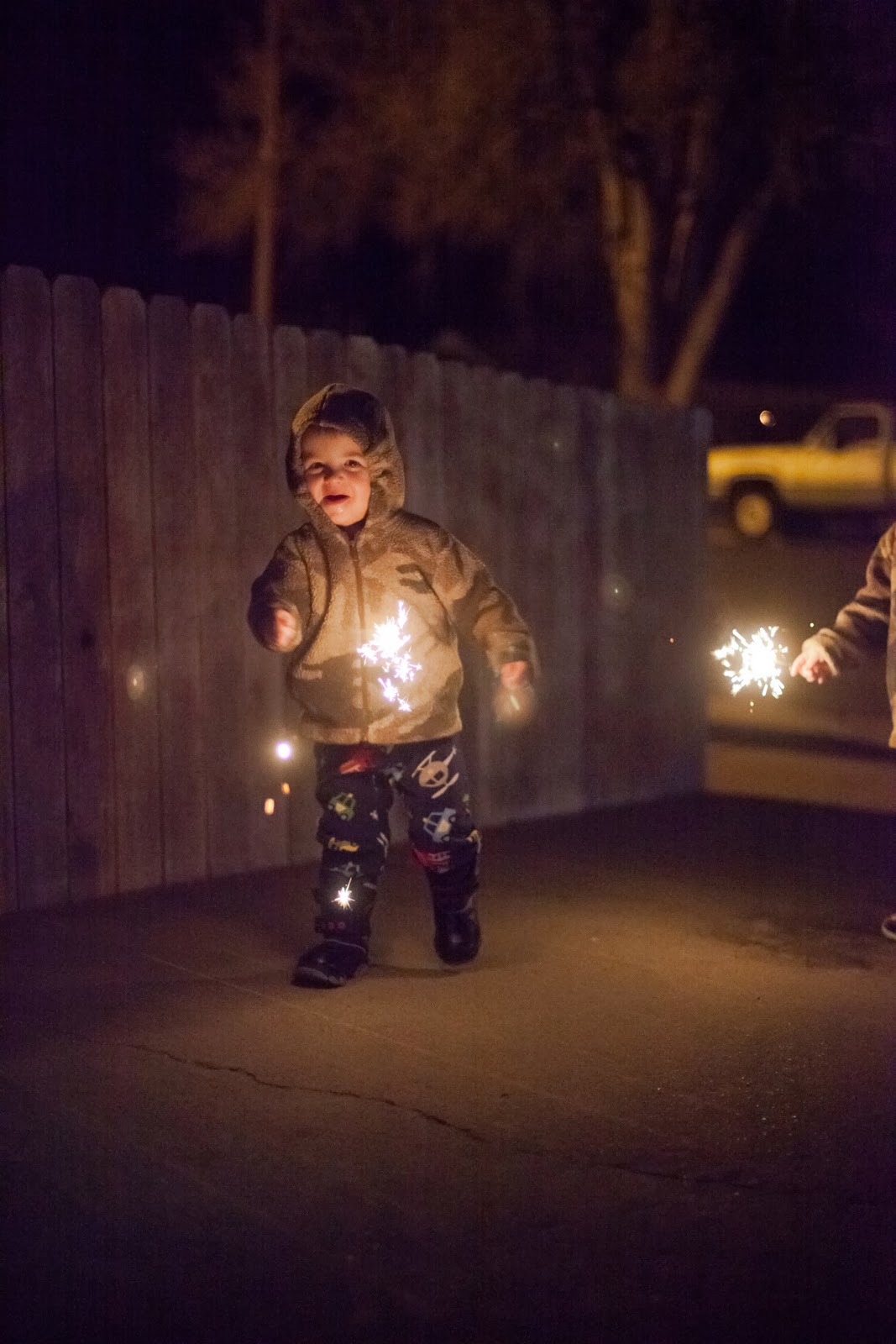 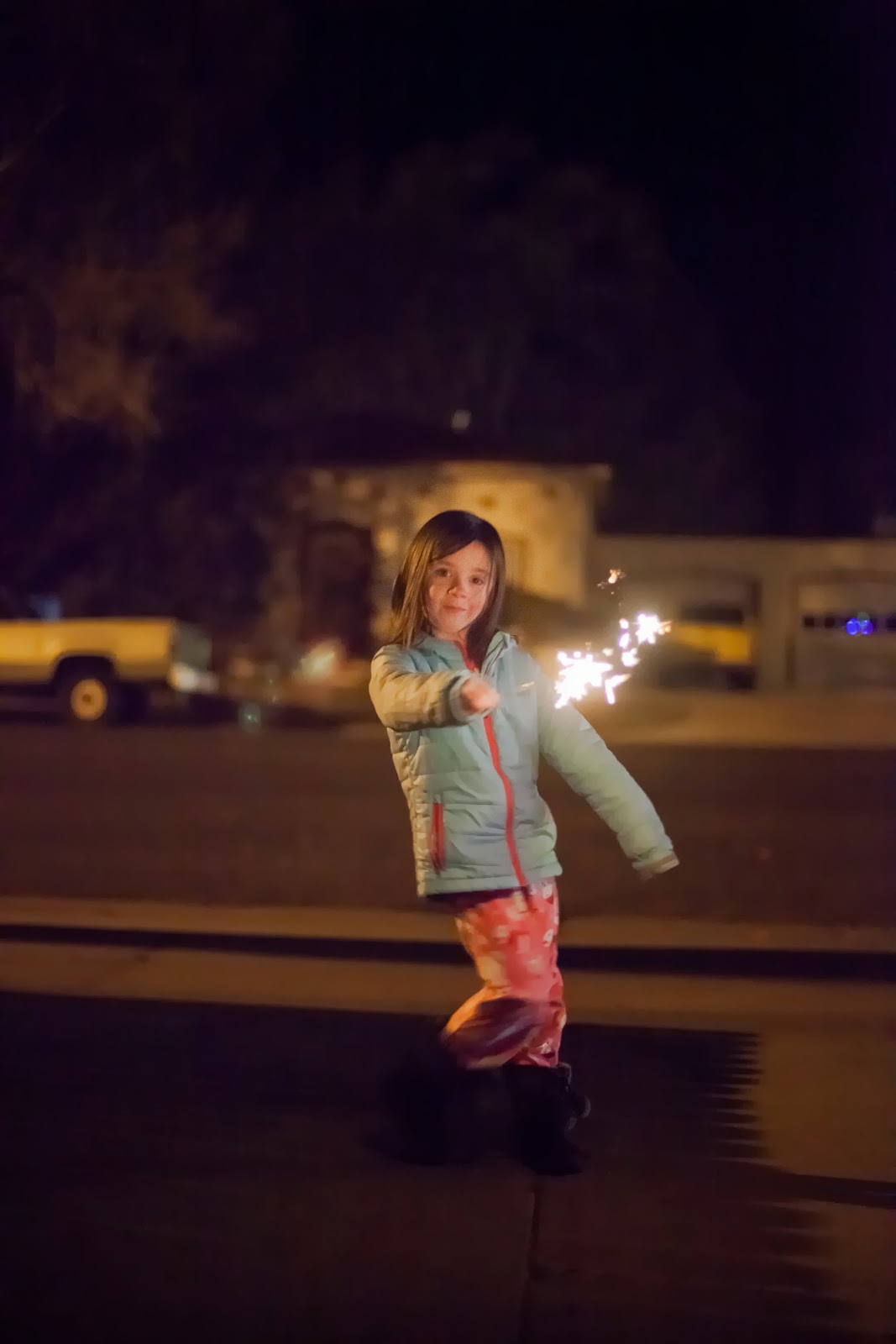 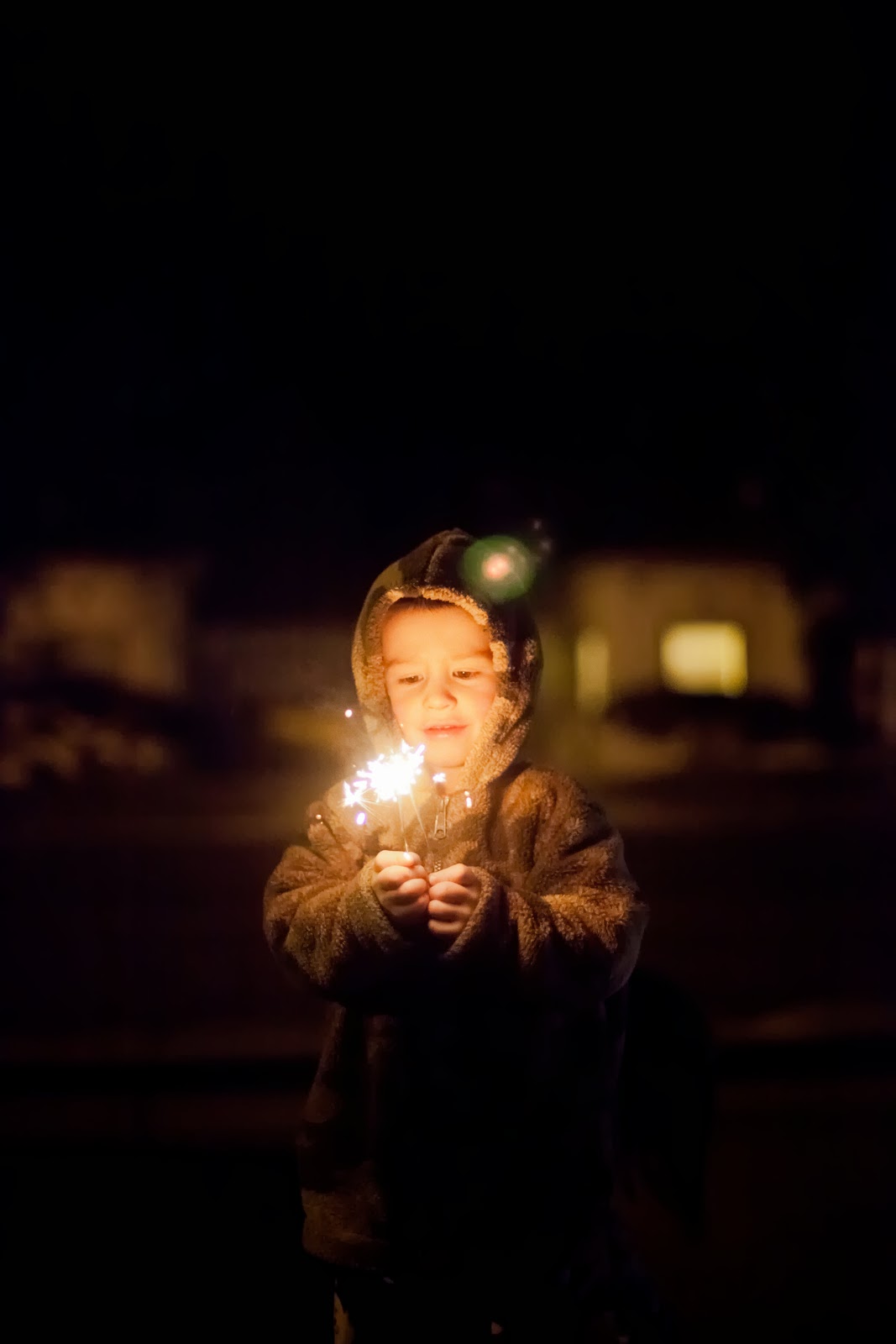 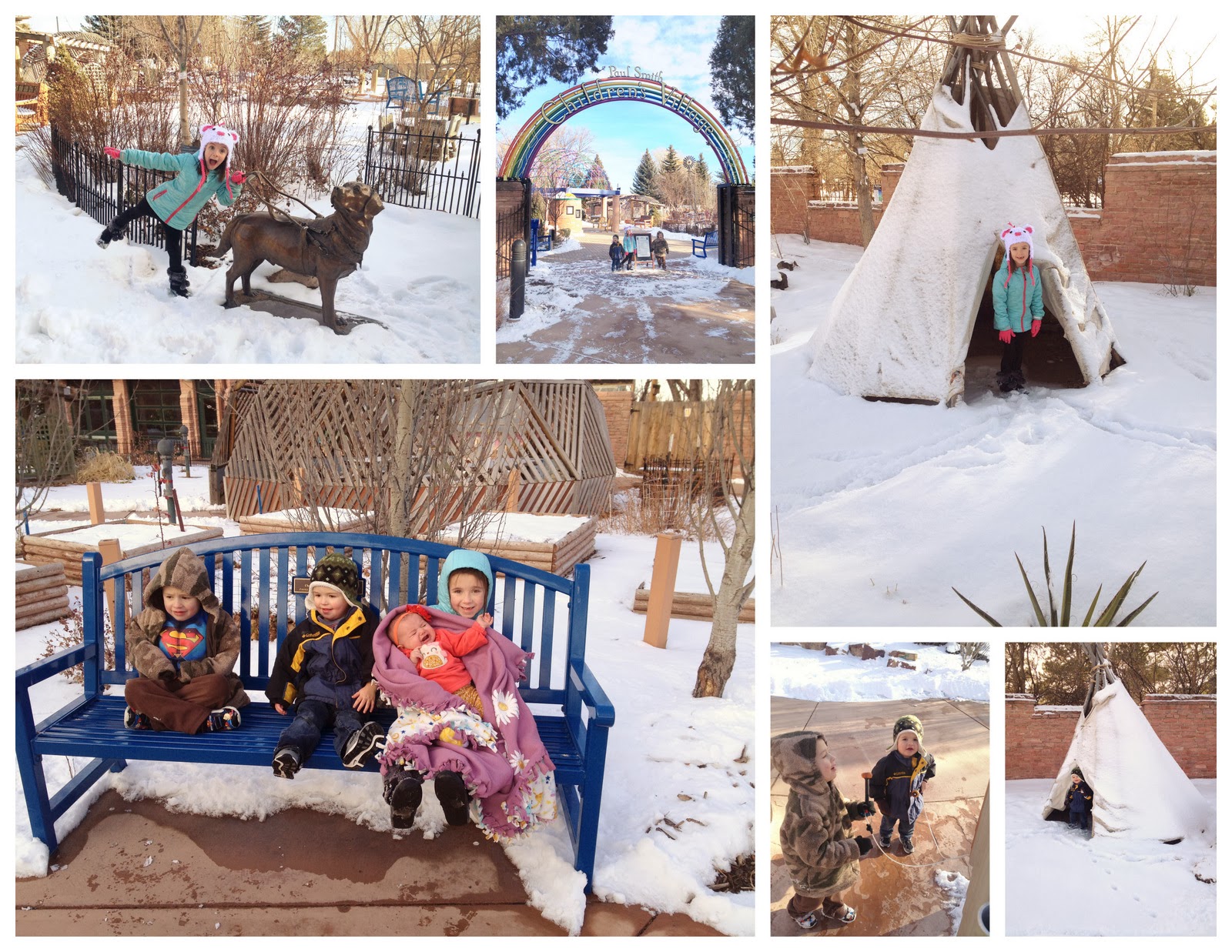 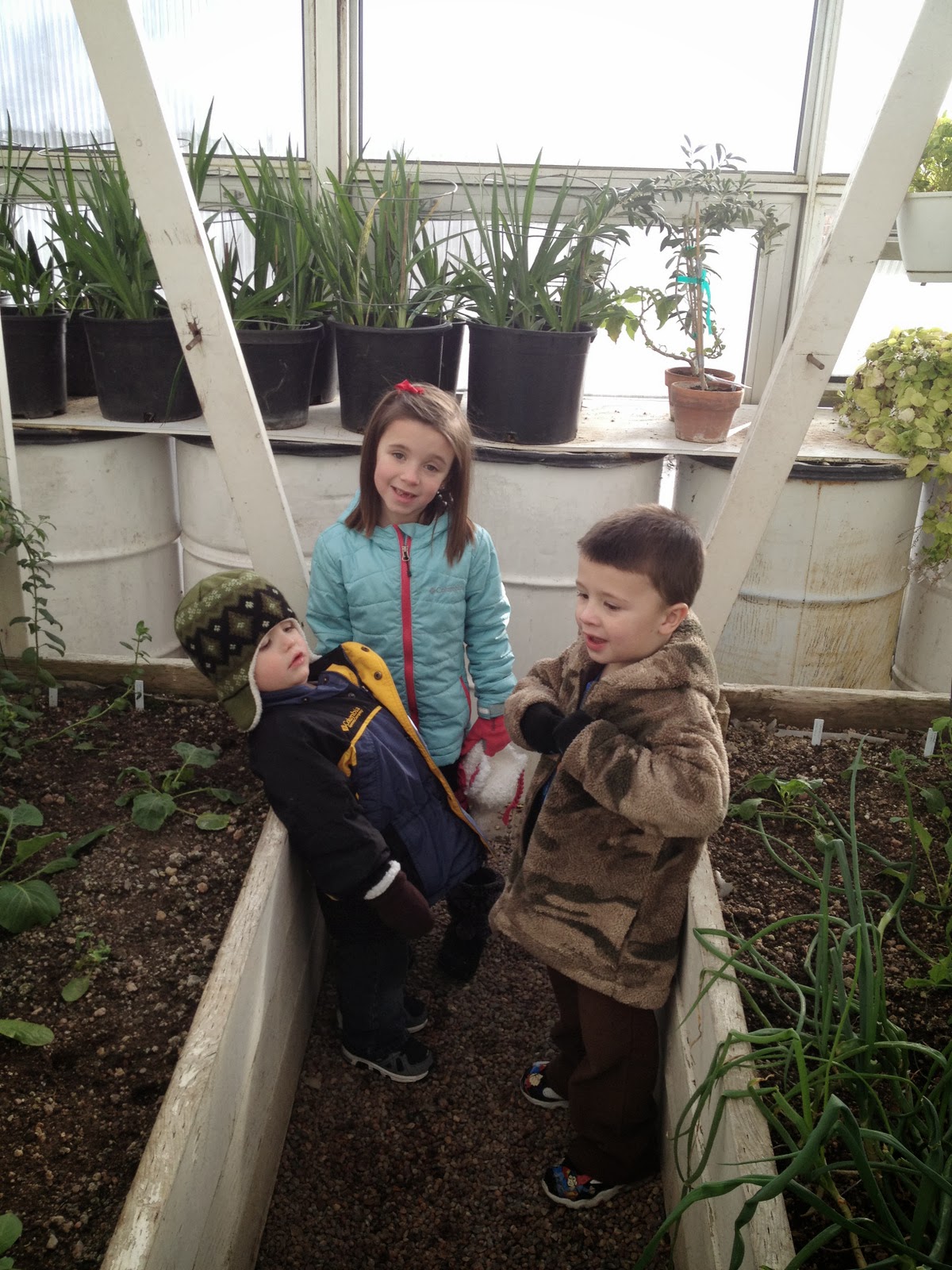 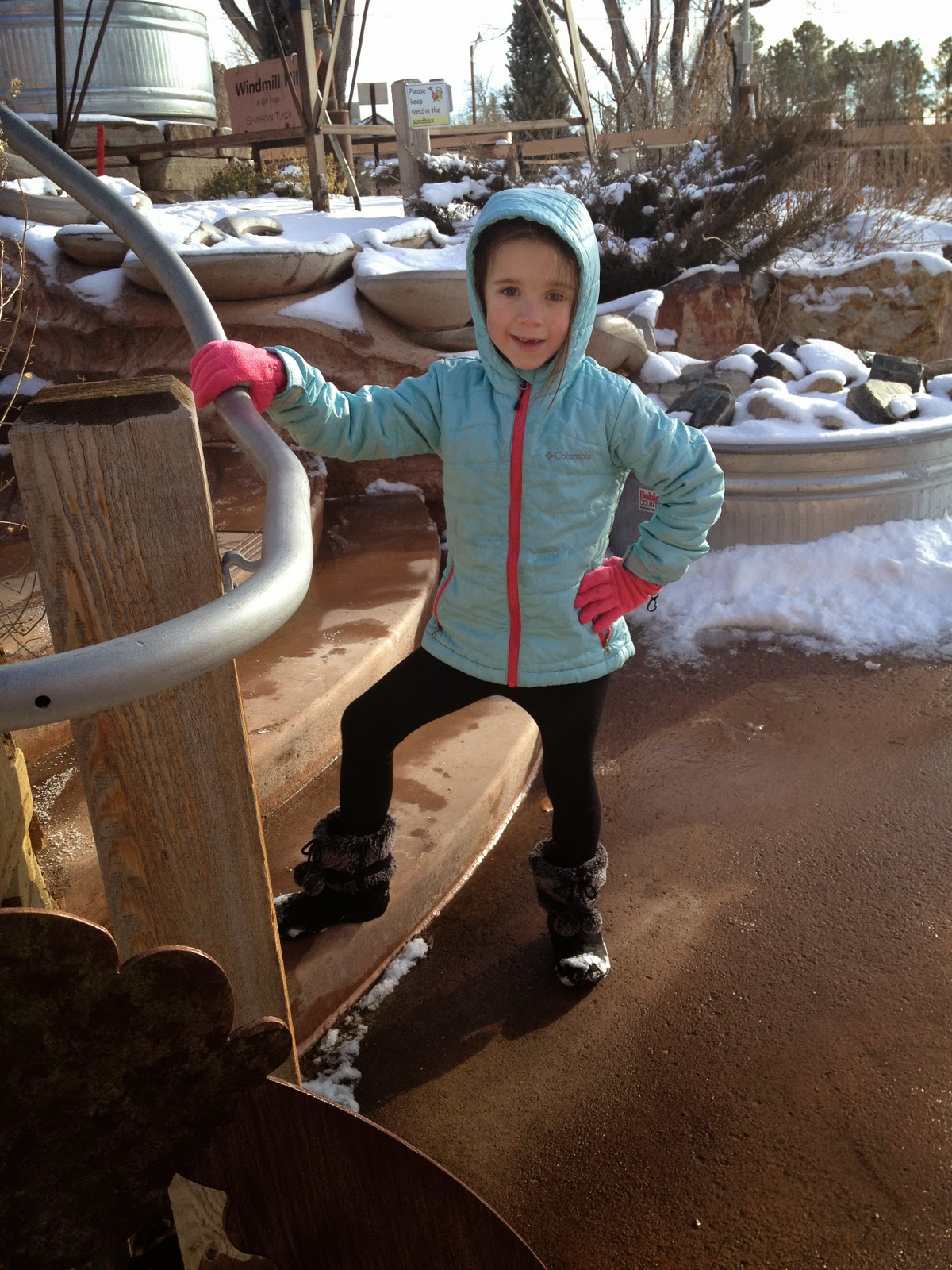 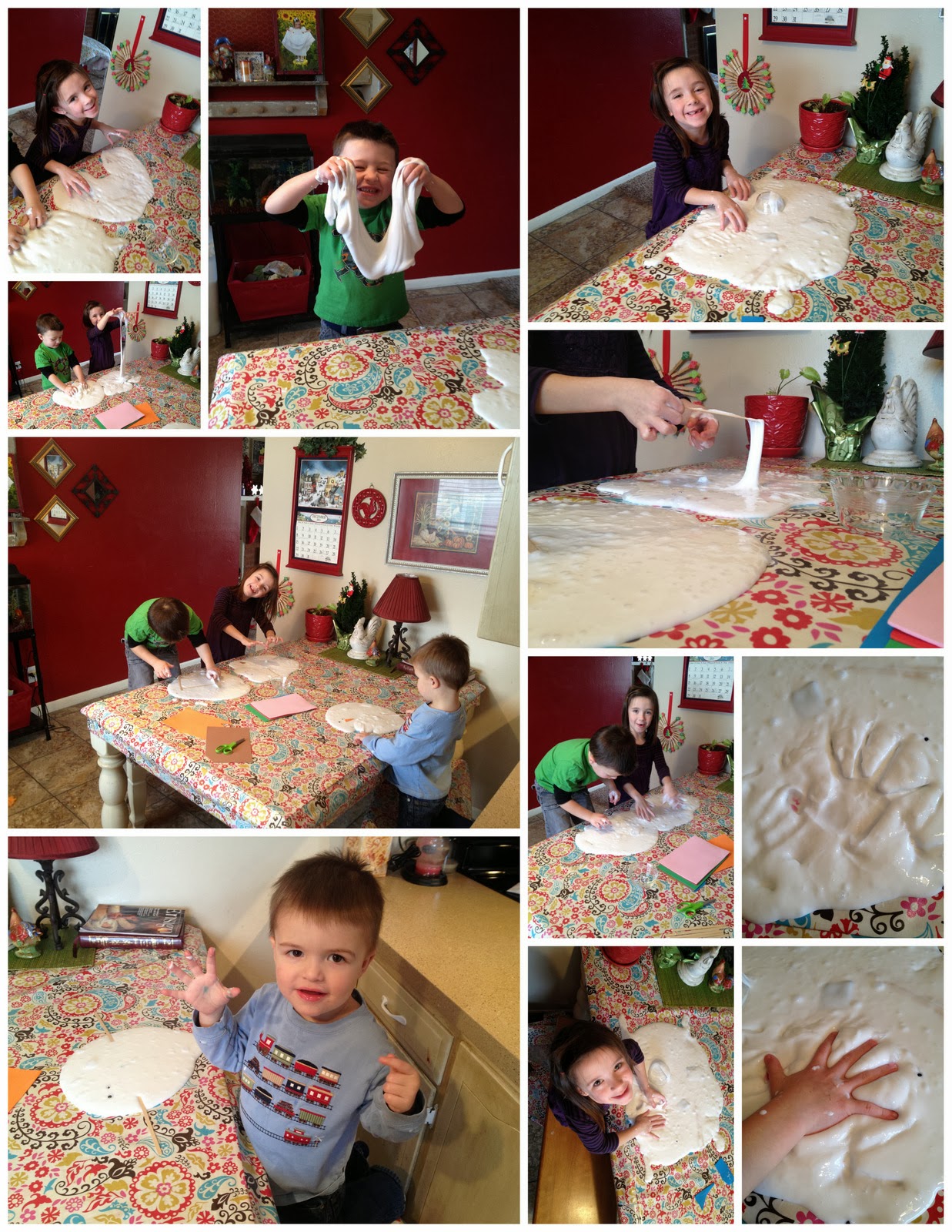 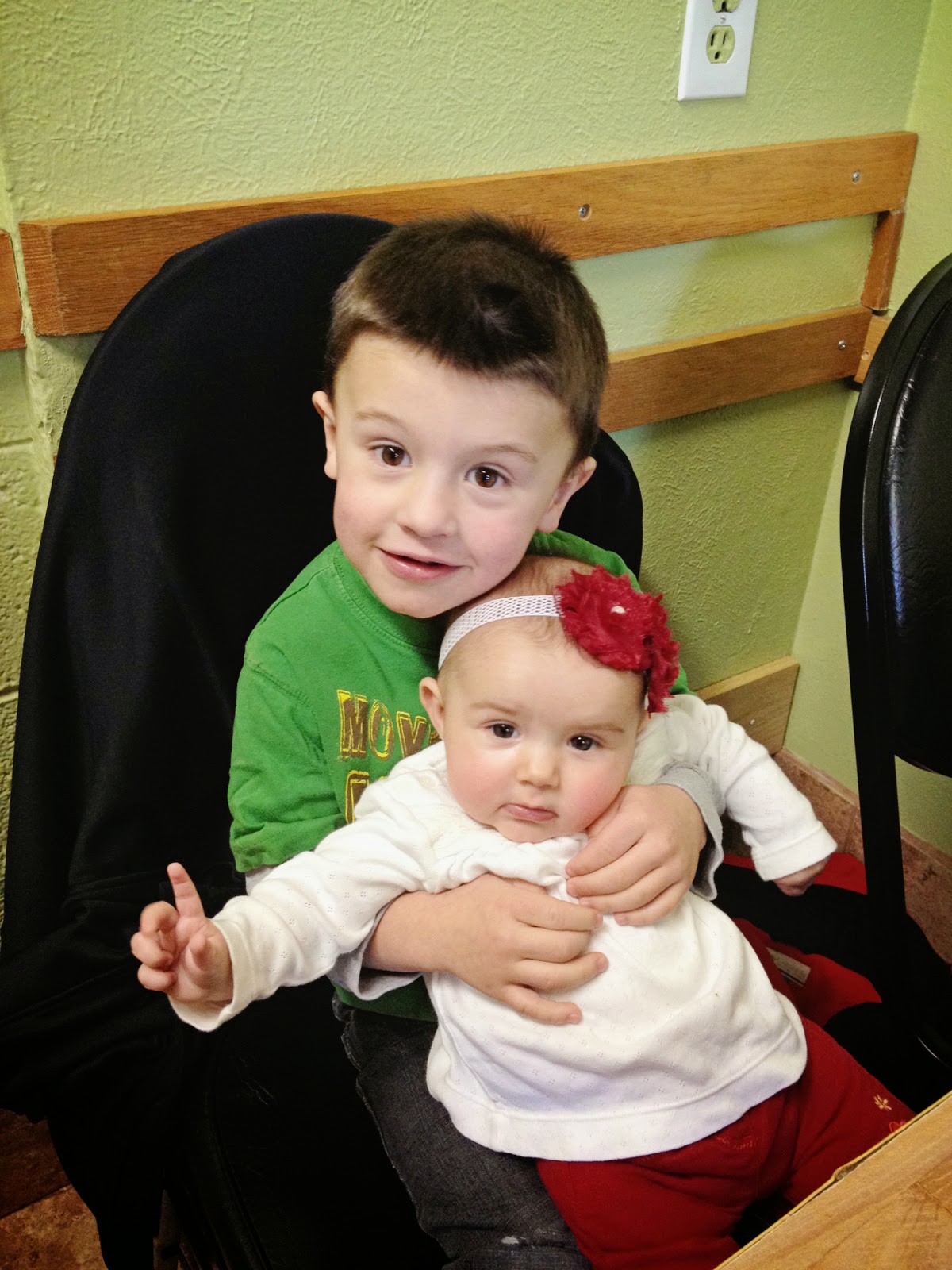 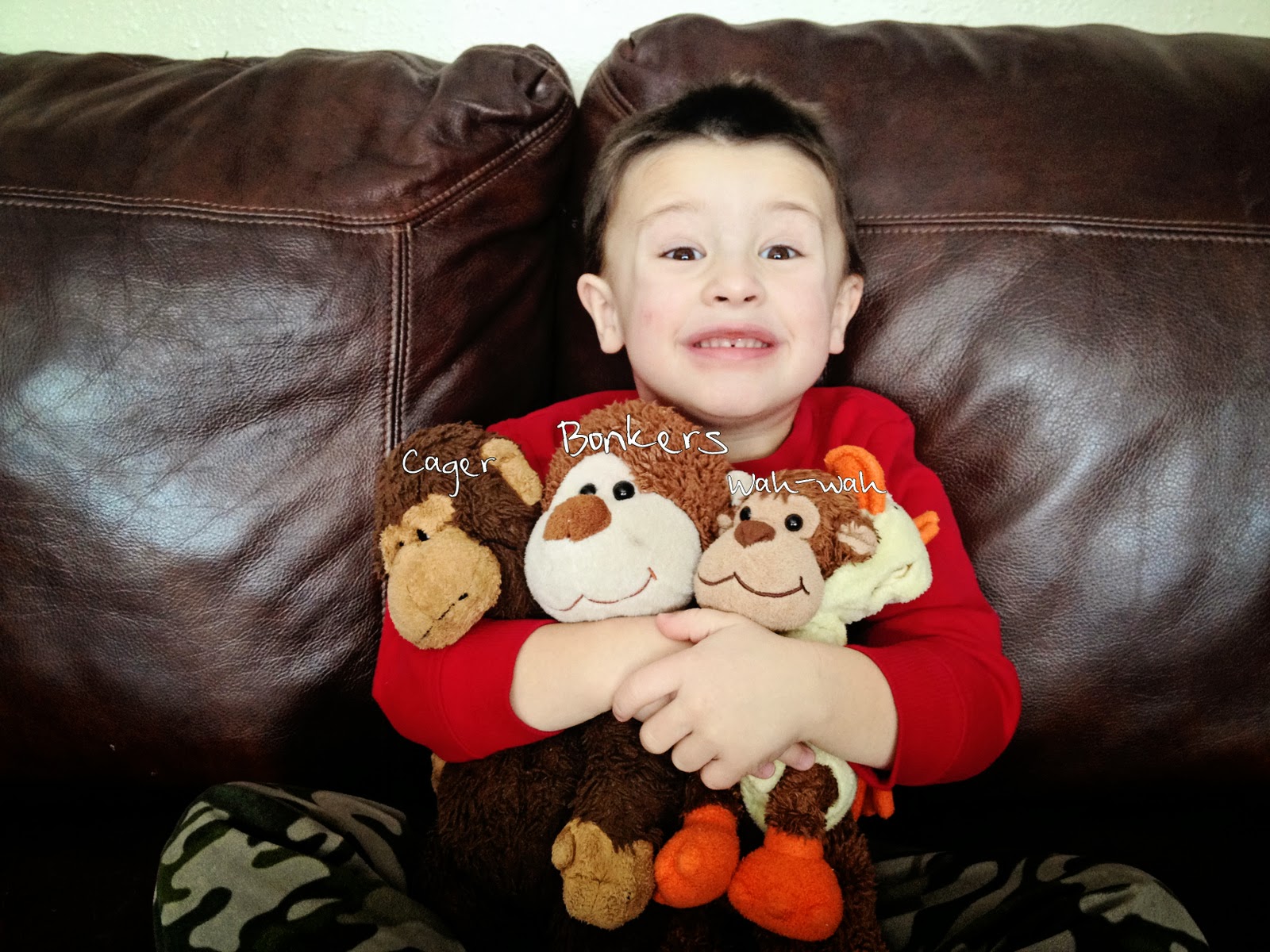 We enjoyed a full, busy week. Monday was our 9th wedding anniversary. Hard to believe 9 years slipped away so fast. We celebrated with a date out on the town. Taylor babysat all 4 kids for an hour while we went to Dude's Steakhouse. Too bad there is not much else to do around town except eat. Amelia made us a cute anniversary card. It said "love is a great gift..." with a drawing of us, a wedding cake in the middle, and the front. Warm our hearts! During the day I took photos of Maren's new baby Micah. He is a cute little guy, born on Christmas Day. I sandwiched his newborn session between two doctor appointments for Evelyn. The kids played at the Jarreau's home while I worked.

New Years Eve was kind of boring around here. I put away clean clothes and cleaned up a bit. Ella came over for a while to play. I did make a special dinner of chips and cheese dip...if that counts as dinner. Justin helped the kids set off several boxes of sparklers before bed. The boys found a little frozen puddle of ice. Phillip tried to melt the ice with his sparklers. Evelyn and I hung out taking photos of the kids running around with fire sticks.

Wednesday we left early to visit the Peter's ranch. They live out near Lisco, NE almost 90 minutes away. Sister Peters daughter had a baby boy almost a month ago. Nicole really, really, really wanted me to take photos of her baby. We tried several times to do his photos at my home but the stars did not align. The kids thoroughly enjoyed visiting the ranch while I worked. Mitch rounded up the boys and a sled to gather firewood. Mitch later took Amelia out to ride a horse. Little Gideon was not so keen on sleeping for me. In the meantime I made a mess in the Peter's front room! It was so hot in room with a fire going and two space heaters. The little guy finally went to sleep. We visited for a couple hours. The Peters are salt of the earth folk. Our ward is blessed to have them. After a long day Everett had a meltdown around snack time. We started laughing at him over his silly tantrum. He was so incensed he stood up and yelled, "Don't laugh at Everett, not funny!" That little guy is sure growing up.

The kids and I planned on visiting family friends on Thursday down in Ft Collins, CO. Right before we left I checked my phone to find the Call curse (barfing) had visited the Curry family. Since everyone was buckled and ready to roll we decided to take a drive to Cheyenne. The mall has a fun play area for the kids. The kids roamed the mall for an hour or so. I decided to slip into Victoria's Secret to get Justin a Christmas present. I looked back to make sure the kids were in grabbing distance. Phillip had three lacy bras hung around his neck and was twirling a 4th around his arm. Everett was rummaging through a drawer of underpants. I am sure the store clerks were wondering what a gal with 4 kids was doing in a store like that. Me too, lady...! Me too! It was cold but not too bad so we played in a cool botanical garden. It was covered in snow and quite lovely. We can't wait to visit in the spring or summer. The kids loved roaming the warm green houses as well.

Friday we were bored so I looked on Pinterest (love that site) for some fun ideas. I saw a recipe for rubber snow. We took 8 bottles of white glue, 4 cups of water, peppermint extract, and 2 tsp of borax and made some strange white substance. It felt like snot but was not sticky. The kids totally enjoyed playing with what we now call Snowman Snot. It smells lovely with the peppermint, sparkles with some glitter we added, and feels cold to the touch as well. Everett would not touch the stuff, he preferred to snip up several pieces of paper instead. After a couple days of being away from home, the kids seemed to be fine with a down day. I was fine with spending a day at home!

The wind finally tore our screen door off the hinges. I imagine the kids helped quite a bit eroding the hinges. Phillip lost the hardware for the hydraulic arm many, many months ago, that means the wind catches the door quite often and overextends it. Justin suggested a visit to Home Depot in Sterling. We picked up a nice, new screen door. I am over the top excited to paint the two red walls in our upstairs living space a fun turquoise color. Amelia helped me browse and pick the paint color. I hope the paint is not too bright for our space. I can keep the red accents already up and supplement them with some turquoise. Yum. The temperatures hovered around the low 20s all day. It was COLD and windy. Justin drove the truck there and back. We stuffed all the kids into the truck. Phillip and Everett amused themselves ripping apart two Styrofoam cups and having a sword fight with straws. Amelia nuzzled us in the front seat. She felt like a queen sitting up in the front with us. I crocheted a cute hat with custom yarn for Evelyn.

Phillip absolutely loves his Primary teacher. She is a marvel. I was so worried Phillip would refuse to attend church again with the class and teacher changes. My mommy prayers were answered! The Primary President felt that the Sunbeam teacher would move up with her class. That means Phillip gets to keep his teacher. I love those little miracles that mean so much. On the drive home from church Phillip pulled out a stale 3 day old sausage muffin from McDonalds from his van storage compartment. Yep, he nibbled that on the way home from lunch. I guess now I need to make weekly inspections of his compartment. Not sure what else he has stowed away in there.

A couple of funnies:
*Phillip loves to nuzzle me at night. He crawls into our bed no matter how many times I put him back in his own bed. Last night I was crowded out when Everett decided to join us too. After the boys fell asleep I crawled into Phillip's bed. No joke, 10 minutes later he crawled into his bed with me. After he fell asleep I went back to my bed (after putting Everett back). Once again 10 minutes later Phillip was back. We played musical beds off and on all night. I think his new nickname is Captain Barnacle.
*Last week Phillip gave his 3 beloved monkey family names. I was sitting next to him during the phenomenon. He stuffed daddy monkey's head into his batcave jail/cage...the monkey is named Cager. He bonked Everett on the head with mommy monkey, she is named bonkers. The baby monkey cried, wah-wah...it's name is wah-wah.