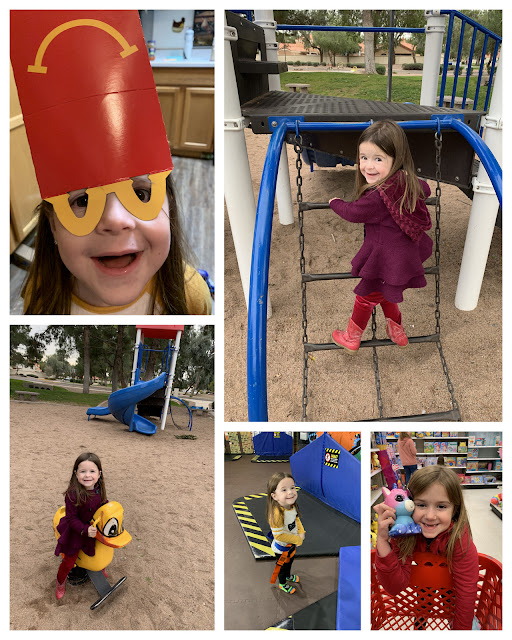 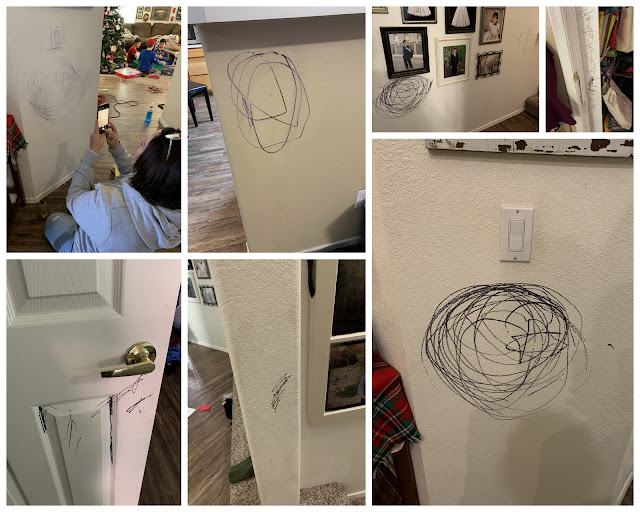 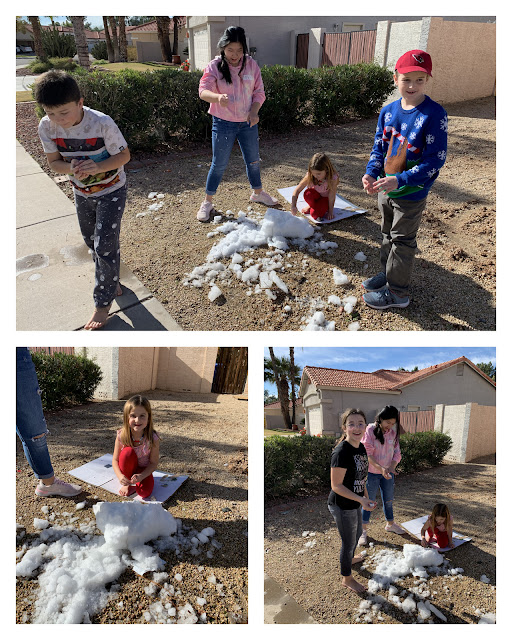 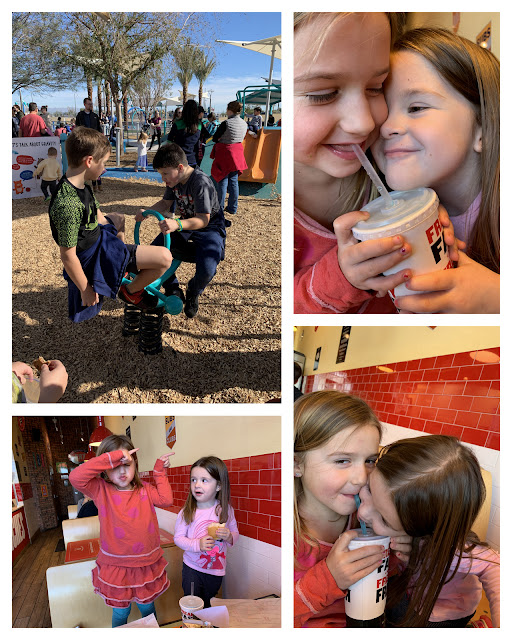 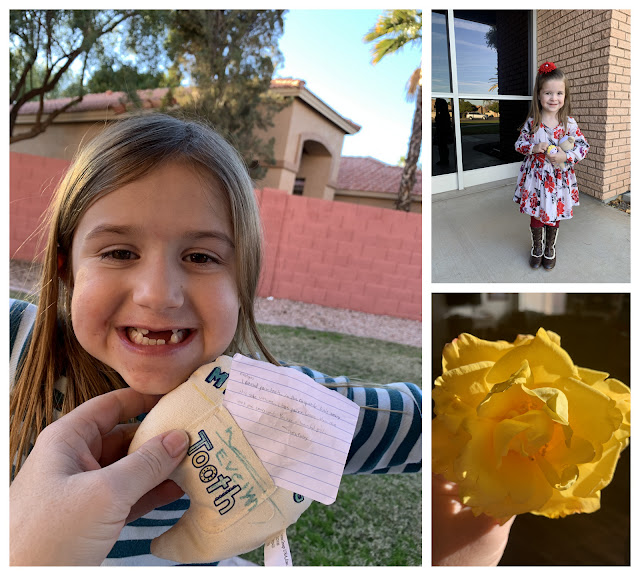 Post-Christmas week was sorta, mostly, kinda boring. We did not have much on our radar to amuse us other than keeping our house ready for house buyers. Thankfully, we had a lull until Thursday so I had plenty of time to repack Christmas decor and get that out of the way. I donated both of my Christmas trees since the lights on my NEW tree stopped working. I changed all the fuses, checked the bulbs disconnected the tree sections, tried everything but nothing worked. The kids tree sheds pine leaves worse than a real pine tree past it's prime. Evelyn was quite worried Santa would forget about us if we did not have a tree! I needed to have a part of my living room cleared out as well to set up my newborn studio for the newest Russo baby.

Monday was our 15th wedding anniversary! Since we celebrated a few days beforehand we did not do anything else except chat about the meaningful memories with the kids.

Josie insisted I take her to the ducky-go-back-and-forth park all weekend. I was so confused, had no idea what she was talking about, maybe feeding the ducks. We got into the van and she directed me to the right park! "Mom...turn dis way, turn the Ban that way...you see the ducky now?" So cute! She was delighted to play on the duckie for quite some time. Justin had work Monday and Tuesday at UTI so he was not around much on New Years Eve. I found a Groupon for Uptown Jungle, the kid's favorite activity indoor park. We played there for two hours on Tuesday then got McDonald's for lunch at the request of 4 out of 5 kids. Our New Year's is quite boring, we go to bed at 10 and do a simple countdown is all. The Broughton's set off a few fireworks, my kids went to watch. They were kind enough to let the kids do sparklers. Josie came inside crying huge alligator tears. She came inside to get her new baby kitty, went back out to show Sister Broughton but they already left for their nightly walk. Josie was adamant someone admire her cute baby kitty, so we walked around the block until we came upon some folks chatting in their driveway. Josie went right up and showed off her toy then skipped home happy as a clam! Outside fireworks blasted until well-past midnight. It's hard to believe another decade has passed. Ten years ago we were just starting our crazy family with a two year old Amelia, a 4 mth old Phillip, a new house in Sidney, and lots of fun in the future for us.

While I was busy cleaning the kitchen after dinner Josie managed a spot of mischief. Most of the kids were in the living room playing. Everett was in the family room reading. Josie grabbed one of those thick (the ones that are about 1/2 inch thick) permanent markers for poster board and drew huge circles on 7 areas (kitchen pony wall, closet, bookcase, three walls, bathroom door, and the stair well). Her art work was not small! She went all the way with her expression. I tried magic erasers (2 large boxes), goo gone, windex, hair spray, toothpaste, and lemongrass oil. The kids helped scrub away New Years Eve. The best we achieved was about 2-3 shades lighter. I resigned myself to painting those areas, hoping against all hope to match the 3 different paint colors. Next day Wendy Call-Kechley contacted me saying she had a miracle product that would remove the marker. I was quite dubious knowing we'd done our best. She came over with a product called Mel-a-luca an oil-based natural cleaner. She patiently worked out the stains with a rag and toothbrush, not to mention half a bottle of the product. Heaven above...she did it. The paint was rubbed down to the primer in most spots but the glaring black marks are gone. I thank her and her sore arm muscles for working a miracle. I worked on cleaning up my mess from the newborn session and dismantling the rest of Christmas. Amelia was a good helper scrubbing walls with Wendy! Evelyn and I take the blame for the marker situation. Evelyn wanted the marker for an art project, she used it but did not put away as instructed. I ignored the marker for a day also not putting it away. Josie was also to blame knowing that art work goes on paper and not walls. Josie did her time scrubbing walls, enough for a 3 year old to handle.

I decided our digital grand piano was too rickety for us to move to Idaho. Last time I listed something it went ignored for months. I listed the piano hoping to sell it before we moved. I was surprised and a bit disheartened it sold in just a couple hours. It feels strange to not have a piano in our house! The family who purchased it lives up in Payson. They dumped a pile of snow from the back of their truck to fit the piano in! I ran inside to tell the kids we had snow in Gilbert. They ignored me! Evelyn was curious so followed me out to find said pile of snow! She got the rest of the kids to come out and enjoy the few moments we had to play with snow in the valley! First time in 20 years...he he he.

Justin flew to Boise, ID on New Years day for a retreat with his new company. His new boss wanted Justin in attendance to help make team goals and be part of planning the next few months. They went snowmobiling as a fun activity on Friday. He said it was much more difficult than anticipated. Before his flight back home on Saturday he toured 4 houses we had tagged as potential homes. Justin was quite impressed with a house in Middleton, ID.

Phillip experienced the first bow and arrow wound! His friend Ryan was over playing. Phillip neglected to teach him the rules about holding fire while someone is down range. He shot an arrow hitting Phillip on the lower part of his heel. The arrow glanced off and tore a good sized hole in his heel. He sported quite the bandage for a couple days and limped about when he remembered his heel hurt. Later I found the boys shooting limes off the tree as target practice! Just a week after Christmas and all the arrows are either lost or damaged! Guess who gets to buy more arrows?! Not me that's for sure.

We met up with some families from our ward and our Call cousins at a new park in Gilbert for a couple hours of fresh air. Everett had an espionage mission going to to spy on the older kids without anyone noticing. The boys went back with Aunt Laura to play more with Anson and Gary. The main reason is the boys wanted pizza for lunch and the girls wanted Jimmy Johns. We had more folks looking at our house while we were gone.

Everett accidentally kicked Evelyn in her teeth a few days before causing her wiggly lower tooth to loosen even more. She was beside herself with worry about the tooth coming out. She was worried it would come out in her sleep and choke on it. Not worried enough to let me help her. It took me two days to cajole her mouth open! That tooth came out without any pain or issues. A light pluck with a tissue before she even noticed. She was so happy to stuff the tooth into her tooth fairy pillow! In between her room and the bathroom she lost her newly plucked tooth. She cried and cried frantically searching for her tooth. The tooth fairy left her a dollar and a tiny note in spite of the misplaced incisor. One bright side of Arizona winters are the gorgeous roses! It's the perfect weather for my five rose bushes to put on their show. Flowers bloom year round here, makes my heart so bright and happy.

Josie started Primary on Sunday! She is finally old enough to graduate. She had almost an extra year in nursery with her early February birthday. Switching from Nursery (puzzles, toys, and snacks) to Sunbeams could be quite the challenge for her. She cried all through singing time. Phillip sat beside her as a comfort. Such a good big brother. The younger kids met their new Primary teachers at a Primary breakfast on Saturday. The kids got to eat donuts, drink juice, and play fun board games with their new teachers. Everett and Phillip's favorite game was playing with a set of tiny magnetic balls. I told them Dad had a set, they freaked out wondering why he never played with the magnets. Once at home we could not find the magnet set, looked in all the places with no luck. Justin had no idea where it went either.