Letter V is for: 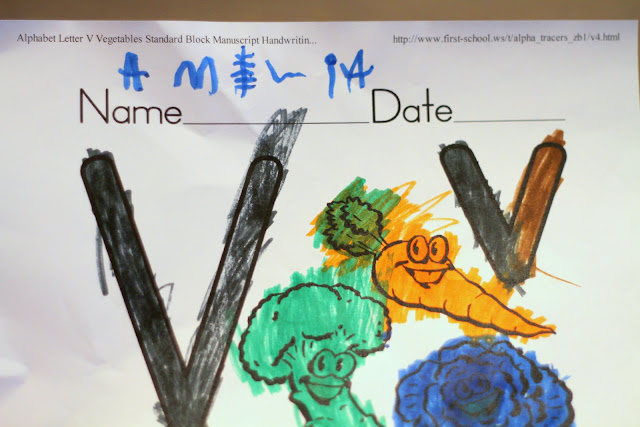 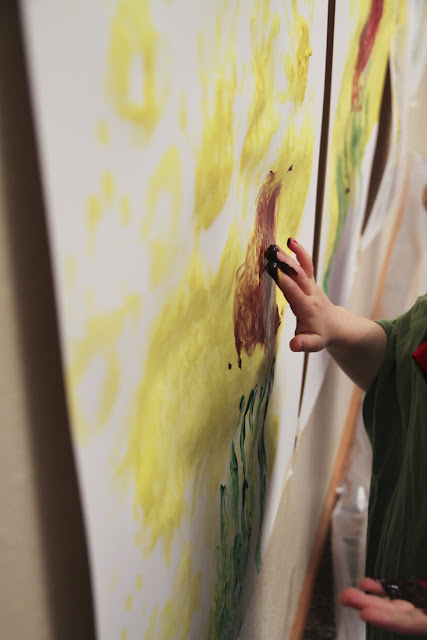 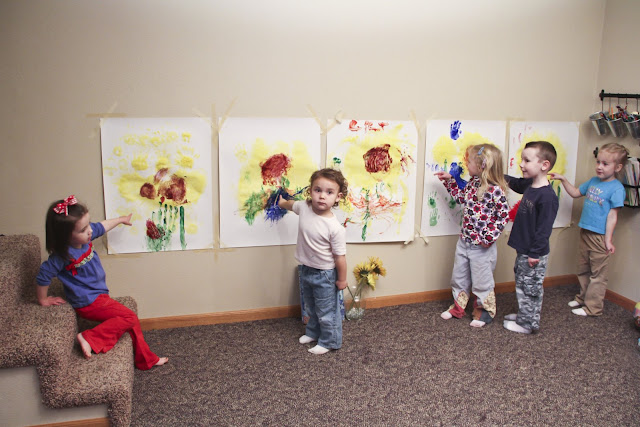 We had an exciting week at preschool! Our letter of the week was the simple, yet amazing letter V. I felt like doing something with art and science with the letter so planned accordingly. One of my favorite Impressionist painters is Van Gogh. I saw a number of his paintings in person and was floored at the amount of paint Van Gogh used to create depth and motion with blobs of paint. Amazing. Monday we learned about Vincent Van Gogh, vases, and the vanilla flavor. The art project was to replicate Van Gogh's Sunflowers painting. I taught some basic paint mixing principles and how to paint with hands and fingers. All the kids followed directions very well. Phillip spent some time in the playpen, Phillip and paint was unthinkable. We had a yummy snack of Nilla wafers dipped in vanilla pudding for snack.

Wednesday I taught a lesson on volcanoes...you know my love for rocks and geology! I read the kiddos a Magic School Bus book about an island suddenly formed by magma and lava. We talked about the Earth's tectonic plates and why volcanoes are so important. Then we all helped build a volcano of play dough around a plastic bottle. Each child put an ingredient into the bottle and watched it explode. The second time we exploded our volcano the foam actually shot out of the volcano 7 inches. Zane's reaction was so memorable. He has quite a sensitive nose and did not like the vinegar smell...at all. Right after the volcano we segued into a lesson about vegetables. I blindfolded the kids and had them taste different vegetables. When they tried to guess it was always carrots or some innocuous vegetable. Some kids learned about potential likes of bell pepper, cauliflower, avacado, and even celery. So funny! We ate veggies and ranch for our snack.

I can hardly believe it snowed a couple inches Monday and Tuesday. The snow is totally melted as of today and temps hoovered in the 60s. At least the snow is not lasting very long. Phillip has a half of one molar on the top right! Now he is back to working on the rest of that molar and the left side. He is not sleeping well again at night then getting up at 5:30 to 6:00 every morning. Poor kid! This evening he pointed to himself and said his name. We've pointed to each other and said names for a couple weeks now. He made the attempt and his version was quite passable. Phillip's speech skills are improving every day. Tuesday I actually won a contest...twice. Alison's friend held a give away for homemade soaps. Drew pulled my name out of the bowl twice in a row! Guess I need some pampering. Now the next trick is finding a time to shower without a monkey trying to shower with me. Phillip shoved the toilet bowl brush into my nice clean shower this morning. Yah, that shower did not last very long.

All week I worried about what to do when the baby comes. Alison is going to be in Utah for her brother's wedding. Thanks to family two sisters-in-law (Courtenay and Charity)! Either could come out and help when the time comes if needed. I feel better knowing someone the kids love will care for my little stinkers/lovelies. We may not need help but we may need help. Preparation relieves some of that stress. Thanks gals!