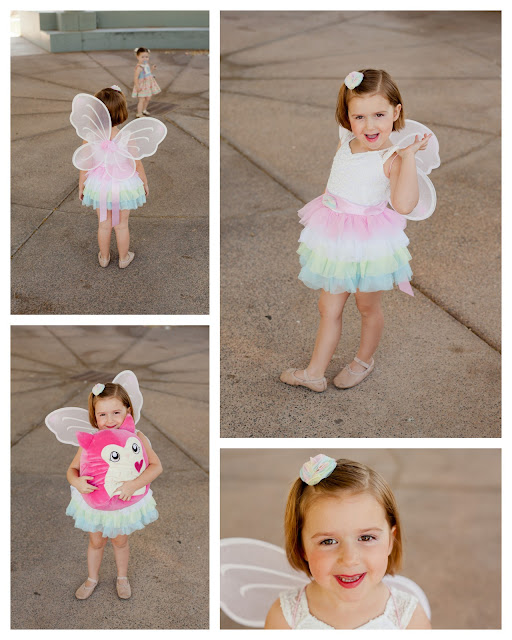 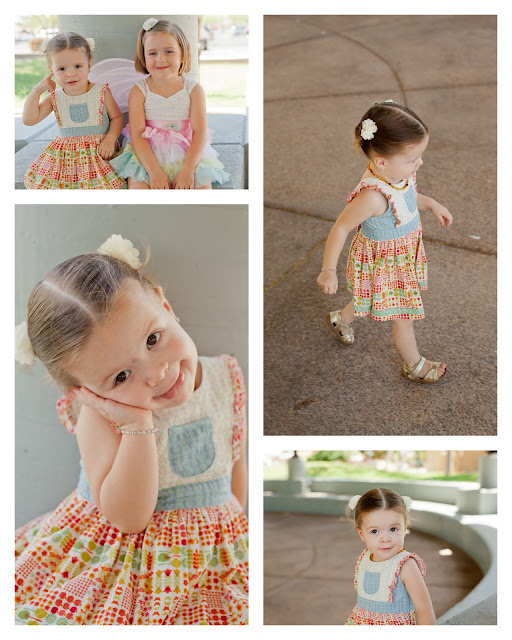 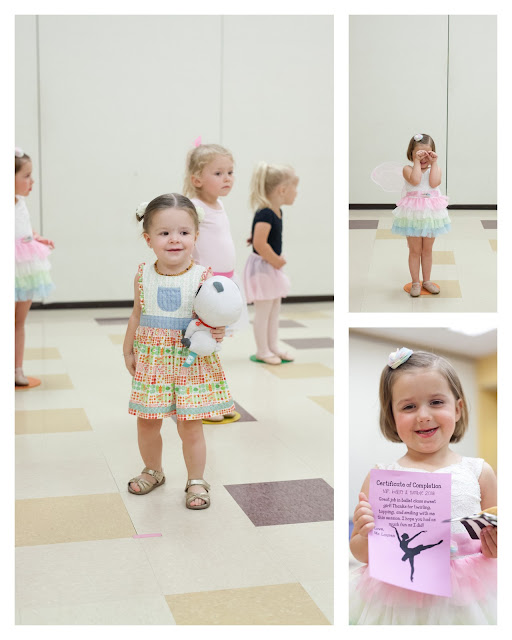 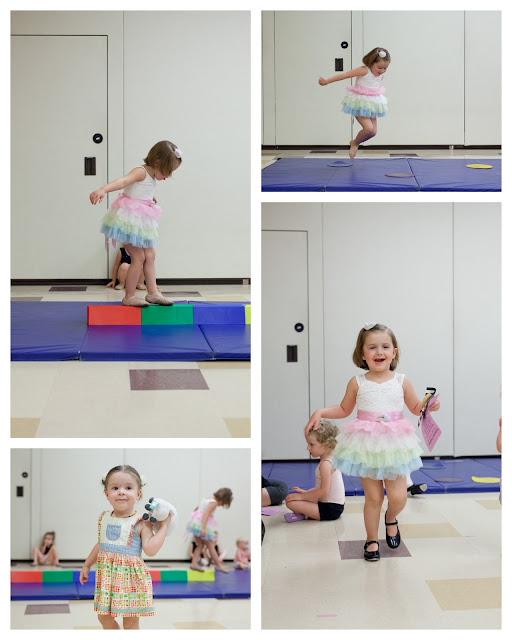 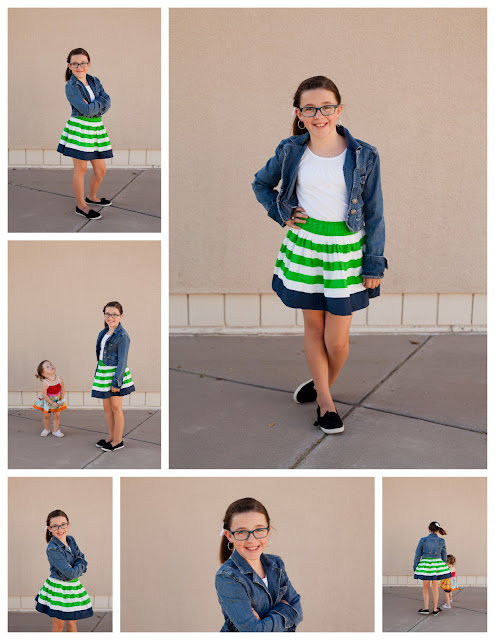 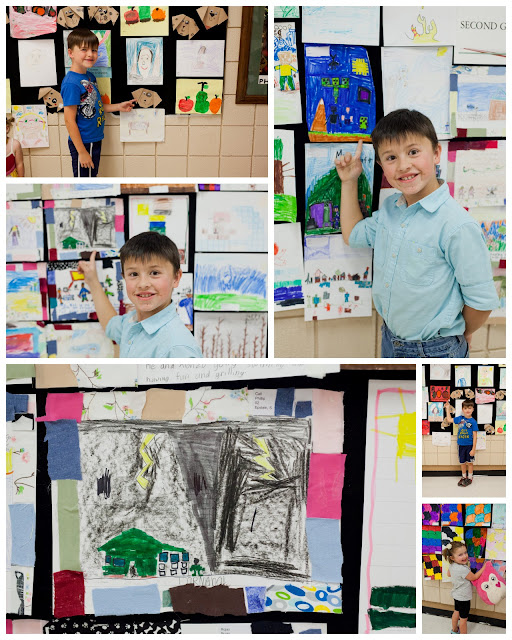 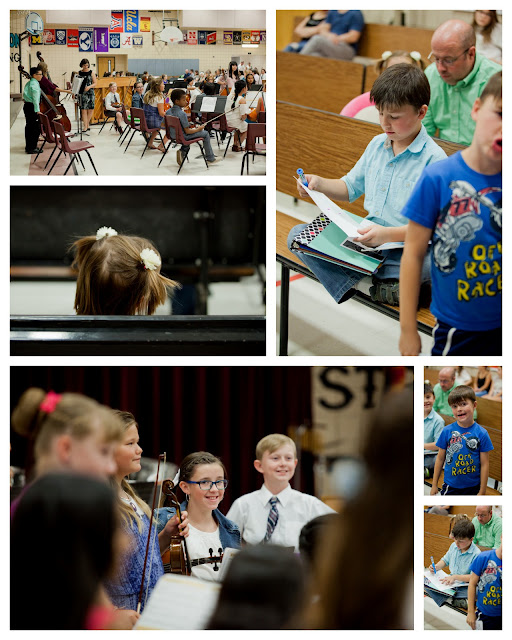 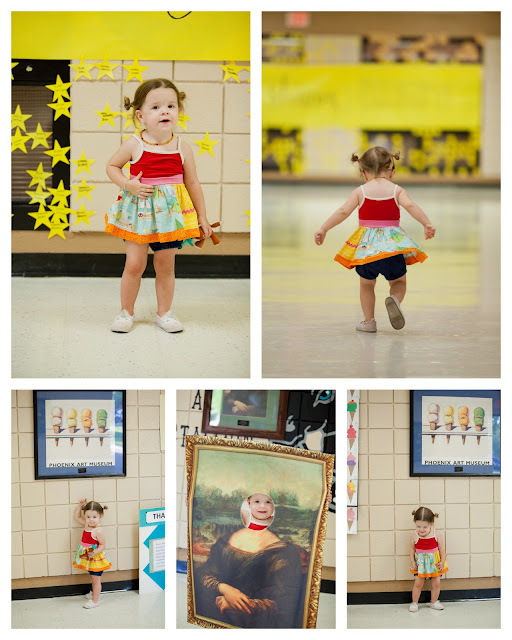 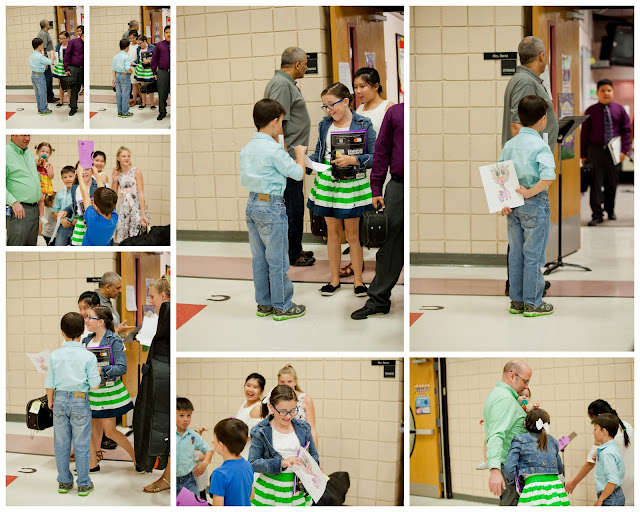 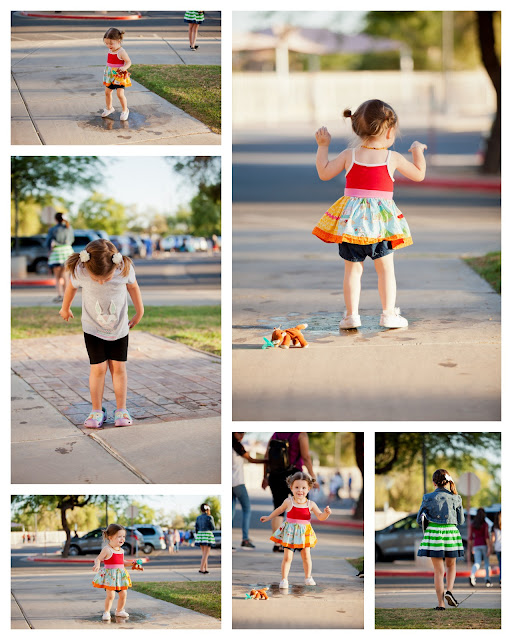 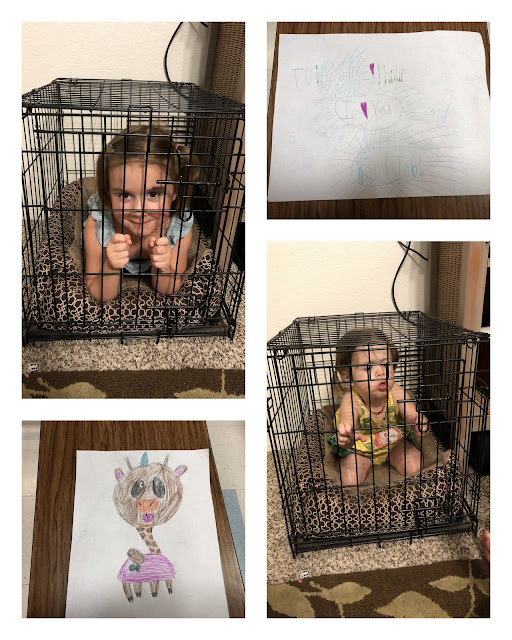 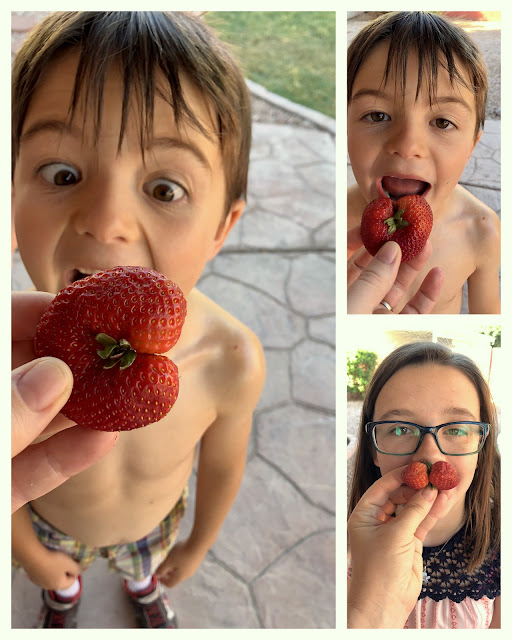 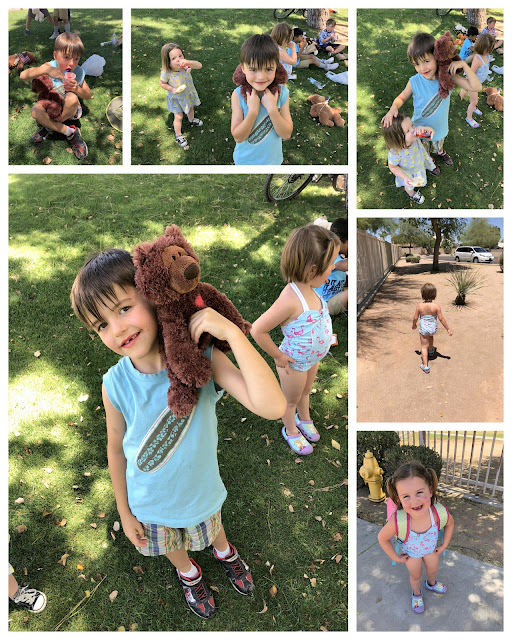 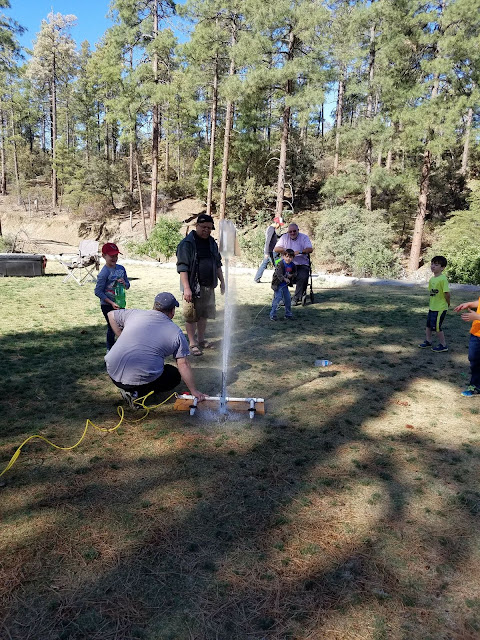 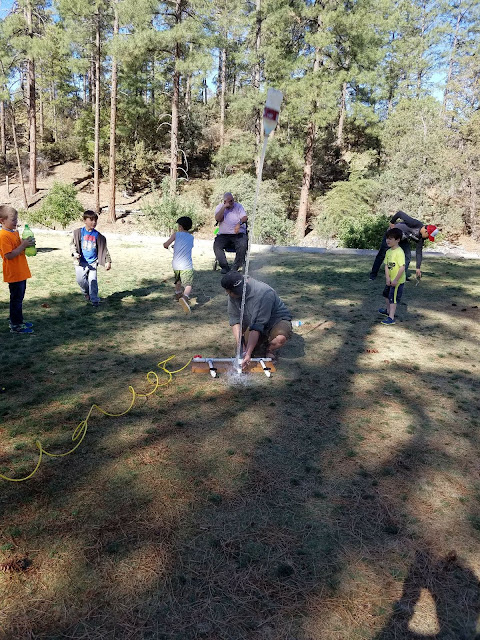 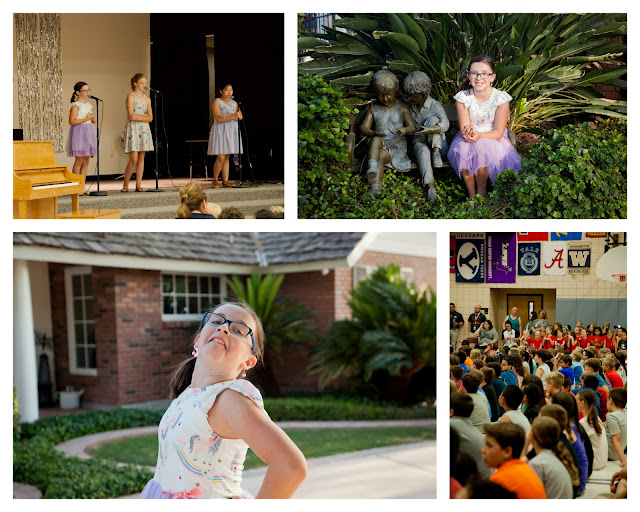 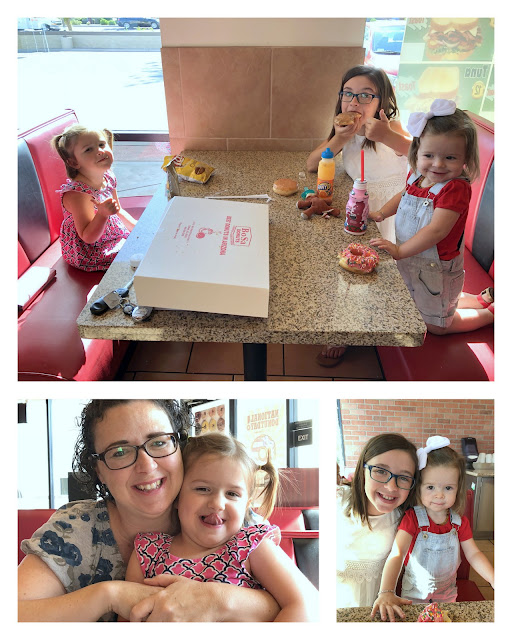 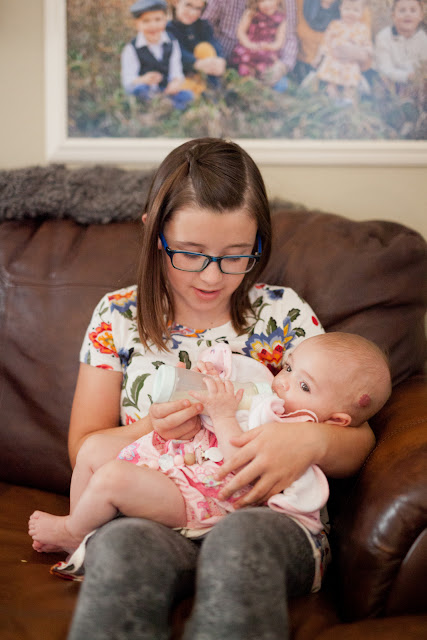 I was using the bathroom (alone with the door locked). There is a good 1.5 inch clearance from the floor to the bottom of the door. Suddenly I saw Evelyn's lips sticking under the crack, she yelled, "Do you wanna build a snowmaaaaan?" I about died laughing. It was so unexpected. Evelyn then started to laugh at herself saying, "silly there's no snow in Arizona, just sand...let's build a SANDMAN!" Insert laughing. Ha ha ha ha ha. She's a funny one. Today she stuffed a ball in her pants, then went to the mirror to admire her new wiener. I am curious what this girl is going to be when she grows up.

We started our week off with Evelyn's last dance class. She insisted on wearing her Mrs Margaret dress since the girls would give us a short performance. I do miss recital days, we enjoy getting all dolled up with hair and make up to go with the cute costumes. Josie found a stuffed doggy someone left in the waiting area toybox. She was quite the pill interrupting the performing girls with her own cute moves. Evelyn showed off some ballet, tap, and gymnastics. She is already signed up for an Island Princess class to learn Moana moves. I need to sign up Jojo for some classes come fall.

I went back to the camera store to pick up a rental 24-105 lens, since mine was still in repair. I also went to sell my 70-200 lens since I don't use it very much. The salesman said I could sell it for more on a public platform like eBay or Facebook. Amelia performed well in the 5th grade strings performance. She loved playing the viola this year and decided to stay with it next year. We signed her up to borrow the same instrument over the summer and next year. She was so jumpy all during my piano lessons, worried we would be late, especially since she needed help choosing an outfit. The theme was nautical so we found a cute boat skirt in her closet paired with a jean jacket. That girl felt all shades of pretty! Before the concert we admired all the art projects the kids created through the Art in Action program. I still love Phillip's the most because of his hilarious rendition of a Nebraskan tornado. Evelyn's little pig tails were totally melting my heart. Josie decided to be a stinker, she made so much noise I had to leave Justin to wrangle the other kids, we headed to the hall where she could run and find "stars" on the walls. Phillip sat quietly and drew a giraffe he gave to Amelia after the concert. He is so kind and thoughtful. Outside the school Evelyn found a couple of "muddy puddles" to jump in. Josie joined her yelling, "Peppa! Puddles!" and snorting like a pig. We celebrated with a Taco Tuesday outing to Del Taco and their play area.

I was so nervous all Wednesday, by 3 pm my stomach was in knots. The reason? I photographed a Bridal session at a very posh resort. I was anxious about forgetting equipment, being late, getting lost, leaving Mia to watch Phillip and Everett, and other factors. Amelia made a chart for each boy to keep tally of their infractions...I was concerned that would backfire in her face. I was nervous because the wedding was Friday morning and the couple requested a complete wedding album ready for the reception. I arrived just 5 minutes late...felt terrible...until the Bride and Groom were 45 minutes late. The session went off beautifully. The Royal Palms made a luxurious setting, the photographers pass cost $250! Once we got started and situated everything fell into place. The girls did not die at Christensen's home, instead rather enjoyed some time on their trampoline, Mia and the boys were still alive with cleaned rooms. Mia excited to earn $10 for her effort. I pulled an all-nighter to cull, process, and assemble the photo book. I finished by noon on Thursday! Hooray for me! I had the book and prints in the Bride's hands before 8 pm on Thursday. Now I want to go back to the resort for some R&R with Justin.

Thursday the girls and I enjoyed a picnic lunch with Everett. The first graders brought stuffed animals to school the prior day to sleep over at school. The kids took their animals to the park for a Teddy Bear's picnic! I thought the idea was so cute. We found Everett gnawing on his carrots and sandwich with a slushie in the other hand. Evelyn was stoked to enjoy a water day for her school. She spent the entire week counting down for water day ("Mom! I have 2 more sleeps until water day!").

Friday was another busy, busy day. Once the older kids left for school I left to drop off the girls with the Russo family. Evelyn was in heaven playing with Averie's barbie collection! When I picked up the girls Kristin had dozens of balloons filled up for the kids to chase! I was at the temple by 9:15 am to photograph the temple wedding part for Kassie and Nelson. I immediately felt intimidated! I am so not a group person, I do well in small groups of 2-3, ha ha. Put me in charge of bossing 50-60 folks and that is quite out of my comfort zone. Thankfully the videographer had quite a booming voice so bossed everyone around. Weddings are not my forte or where my photographic interest lies, the entire situation is way too stressful for me. I admire those who photograph weddings for a living. Right after the wedding I rushed home to get the girls. We ate a hurried lunch then went to see Amelia, Chloe, and Abby perform in the school talent show. Josie fell asleep so I rushed to find someone who could stay home with her, luckily our neighbor Mandeep was home and able to stay with her. I ended up leaving the show early to rush home and grab her after Josie slept 90 minutes. We arrived just in time to watch the girls perform. Justin then raced home to get supplies rounded up for our ward Priesthood Commemoration camping trip (aka Father and Sons). The boys left right after 4 pm. Once again I took the little girls to someone's home for babysitting. This time they went to the Payne's home. Evelyn was so excited to play with Miranda! Josie was not so excited to be left again. Amelia and I arrived at the reception at 5:45 as requested. The couple wanted family photos again. We arrived to find the reception only half set up and everyone rushing about. We chipped in and did not get those photos started until 6:50. Amelia was tasked to clear tables during the reception. I think she had quite the fun time with several friends coming to help her. Not exactly how we wanted to spend our girl's night out, but pretty darn fun! Once the dancing started Amelia ditched the tables for the dance floor. She loved dancing to YMCA! Oh, the memories attached to that particular song.

We continued our girl time with doughnuts for breakfast and a trip to Target. Amelia hosted American Girl Doll Book Club this month. She chose a Samantha mystery book to read. We went to Target to buy the game Clue! Amelia changed the character cards to correspond with those from the book. The girls enjoyed doughnuts for a snack, colored and glitterized their own gems, then played the game. We drove the 30 minutes back to the camera store to return the rental lens then had lunch at McDonalds. The boys came home full of stories about tents, camping, and bottle rockets. Phillip said his favorite part, "was yelling as loud as he could!" Brother Ferolino rigged up the coolest water rocket apparatus. The boys loved their campout so much! We lazed about recovering from our exciting weekend the rest of the evening.

Sunday evening we got to repay the Payne's kindness in watching our girls by watching their 4 cute kids for a couple of hours. Amelia was in heaven taking care of baby Bertie (her name is Liberty), especially feeding her a bottle. The boys played with Phillip's Imaginext toys out on the back patio for a couple of hours. Miranda was kind of a stinker and refused to play with Evelyn. We enjoyed the crazy evening as a group of two adults and 9 kids.