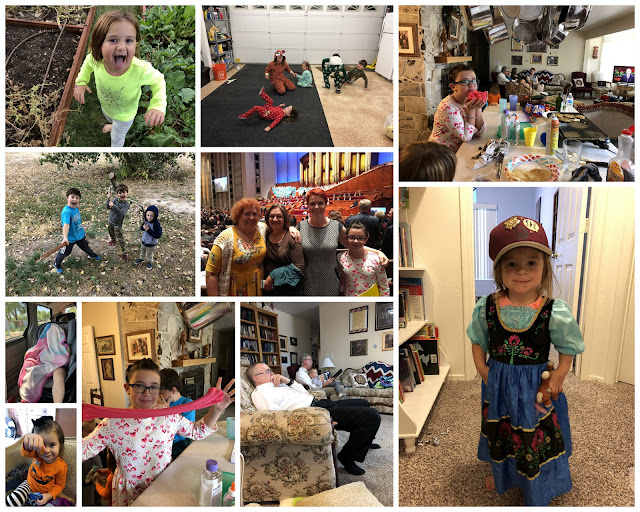 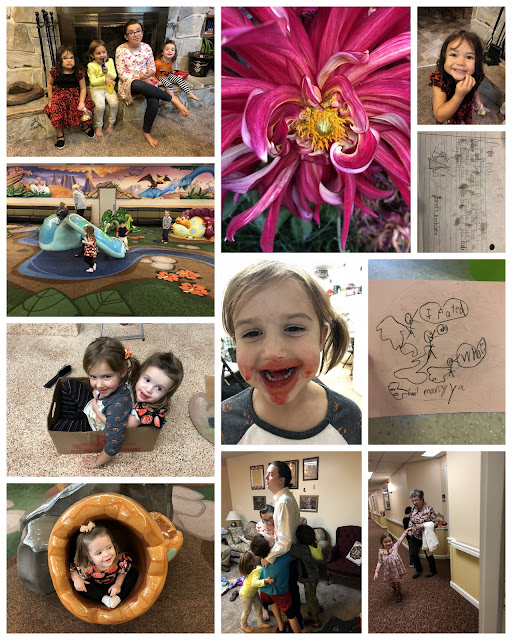 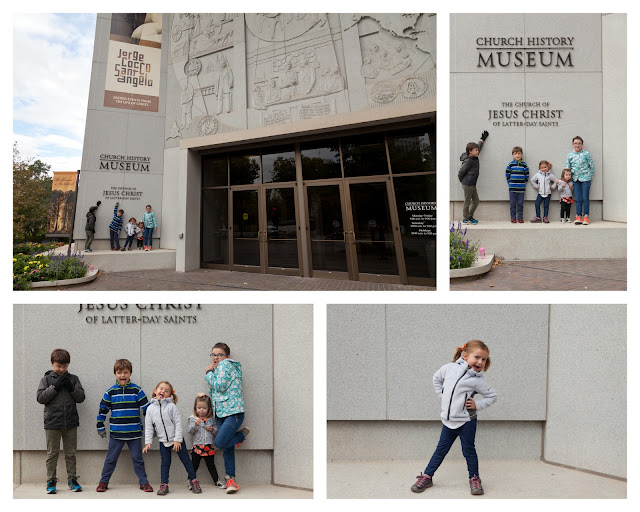 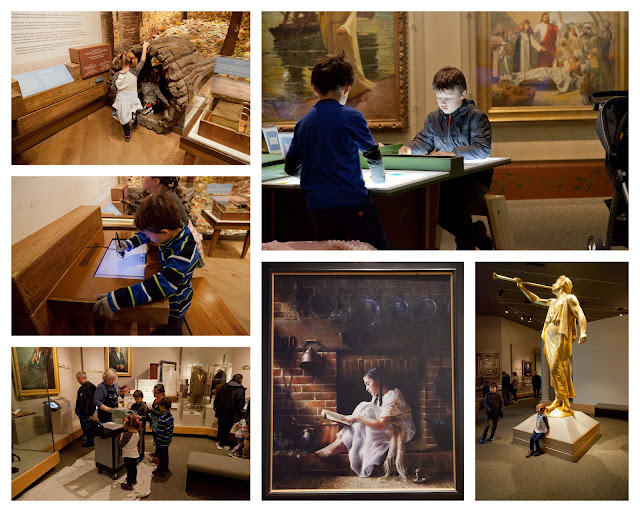 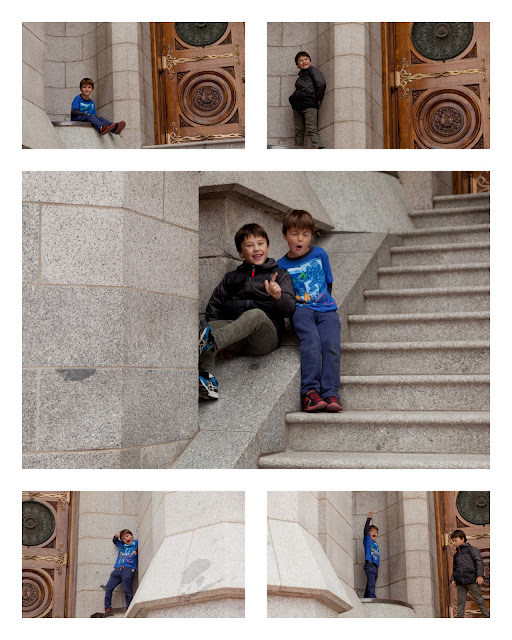 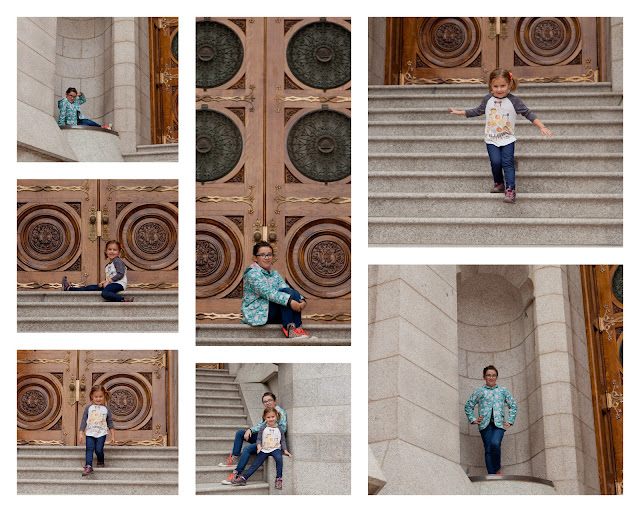 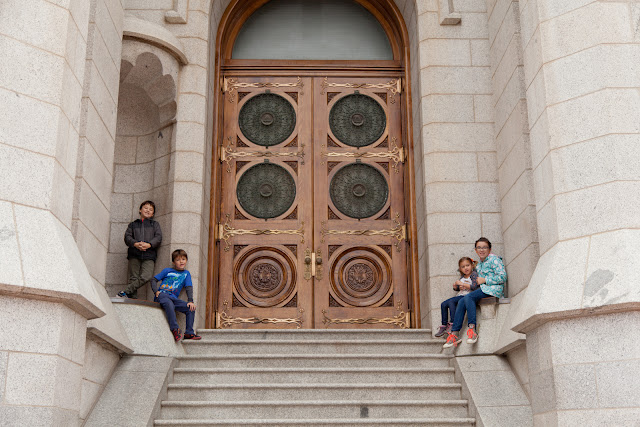 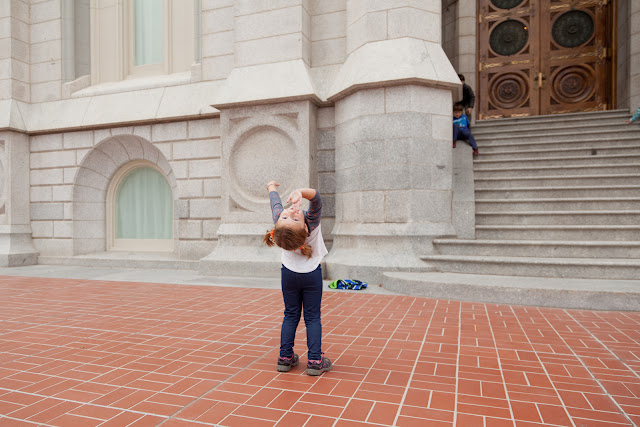 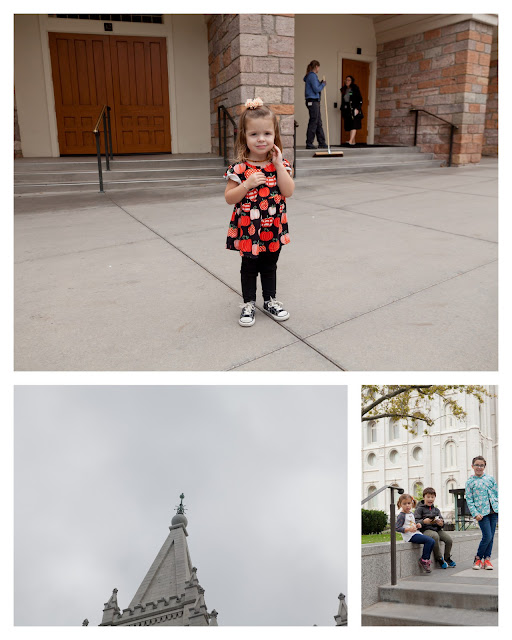 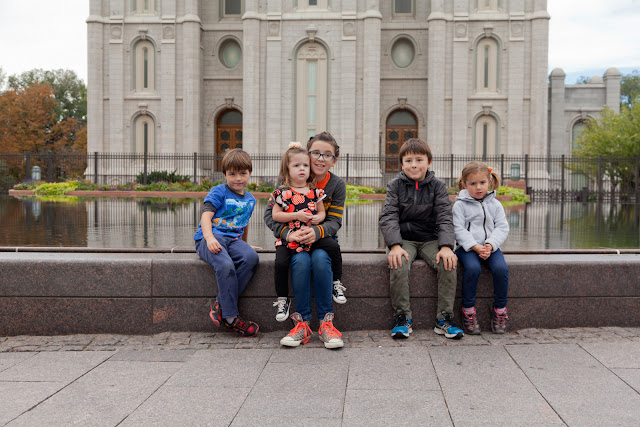 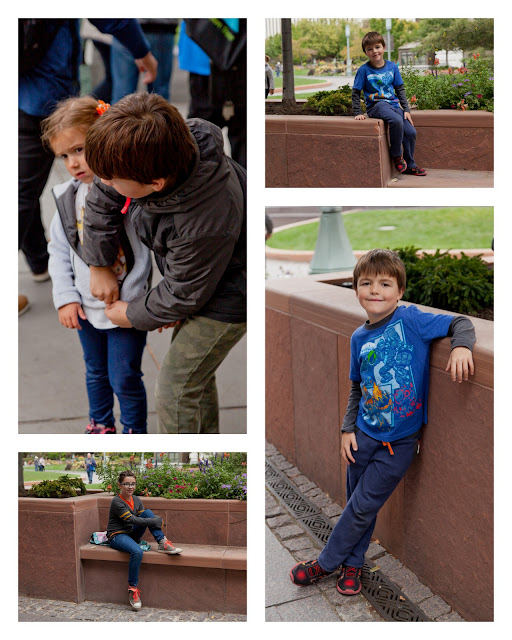 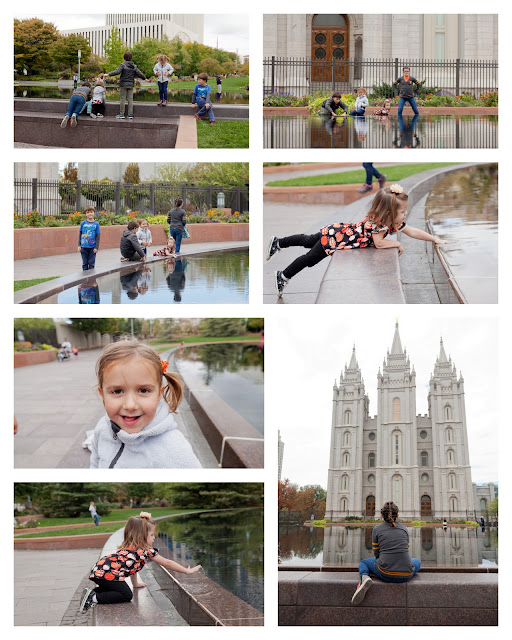 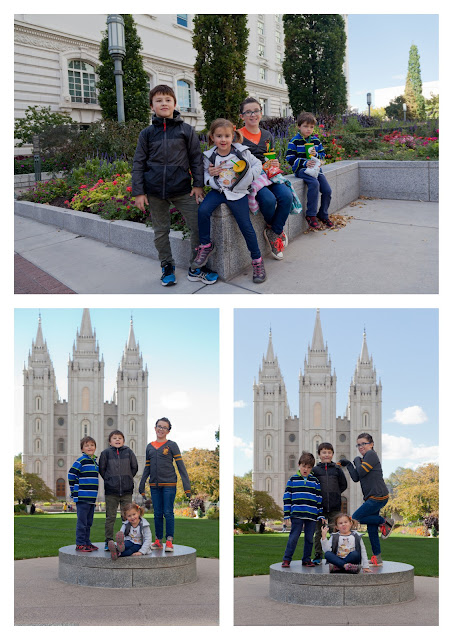 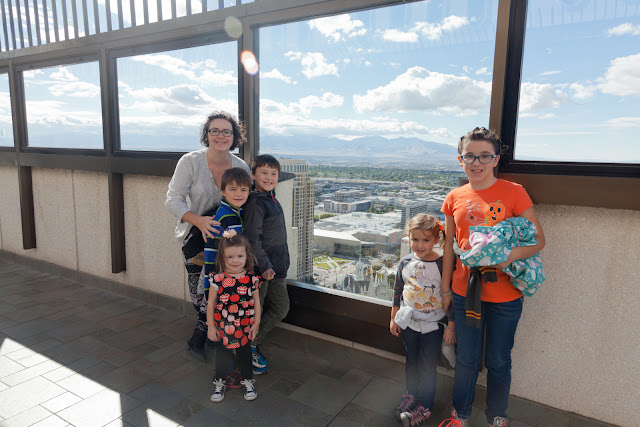 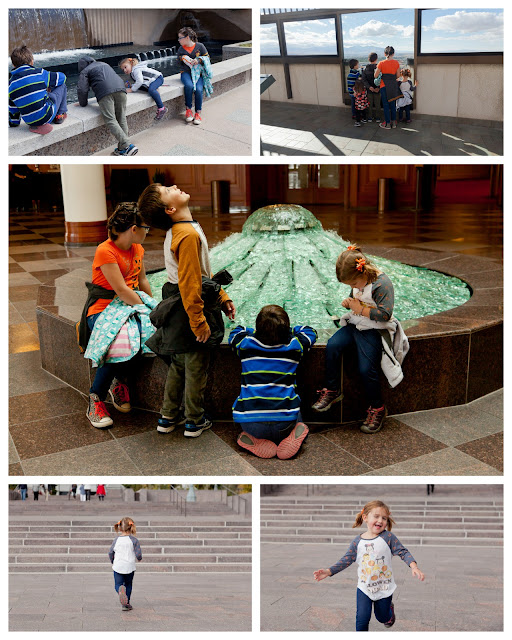 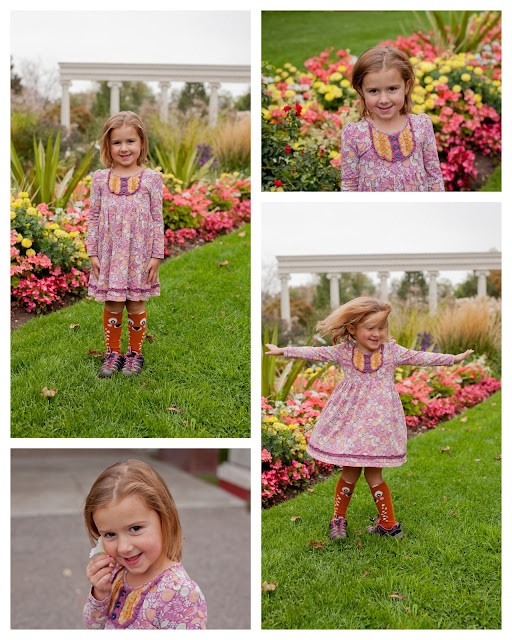 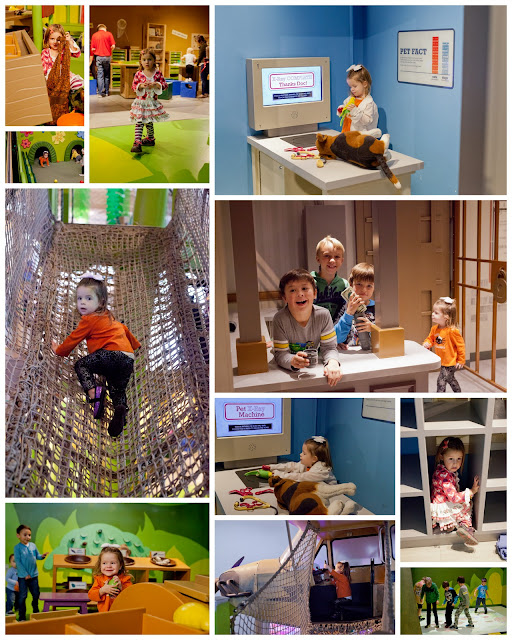 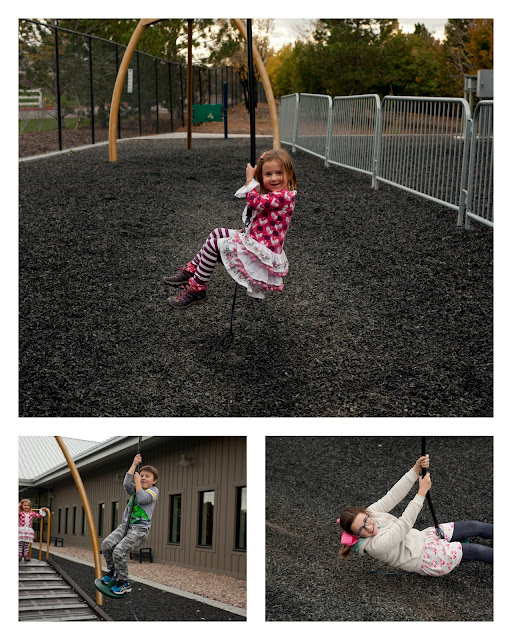 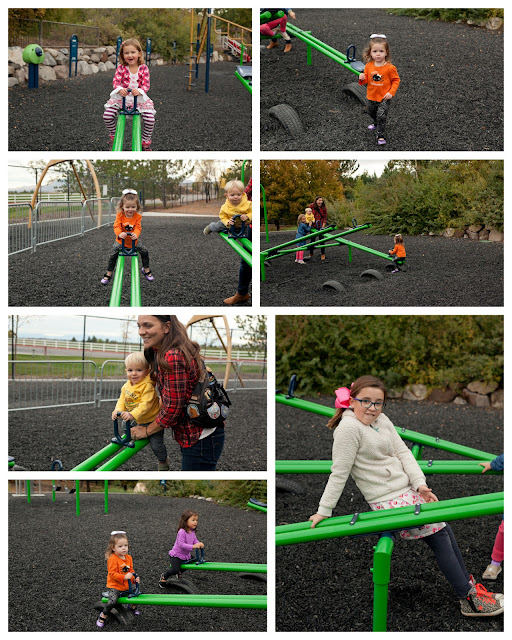 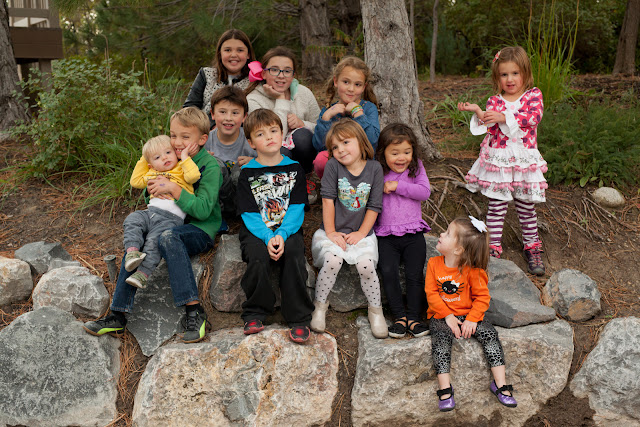 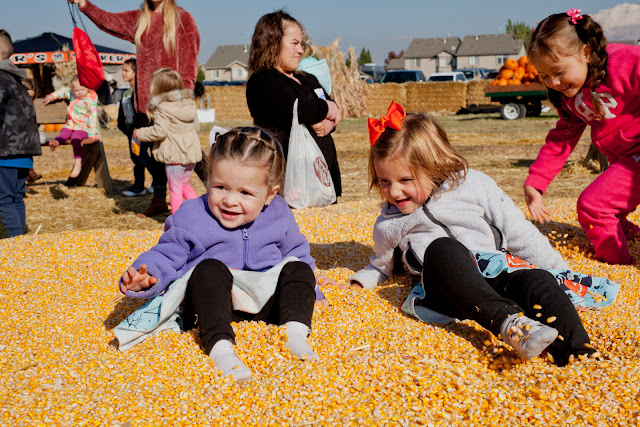 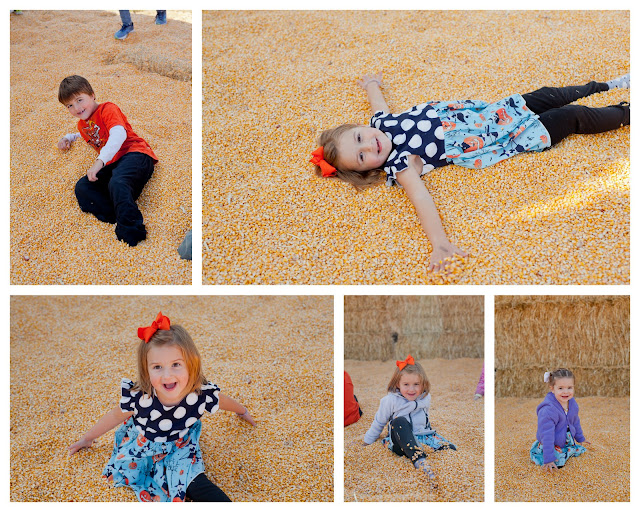 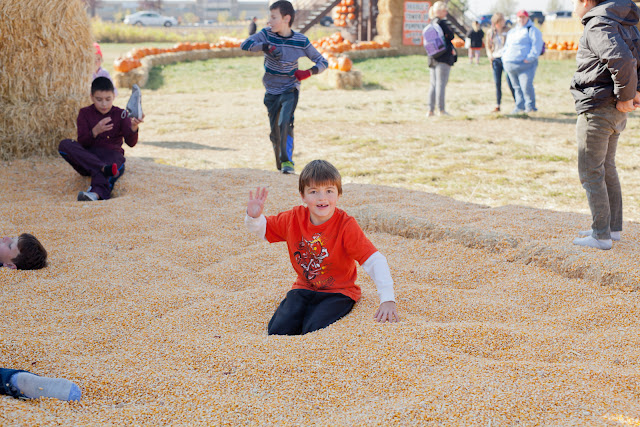 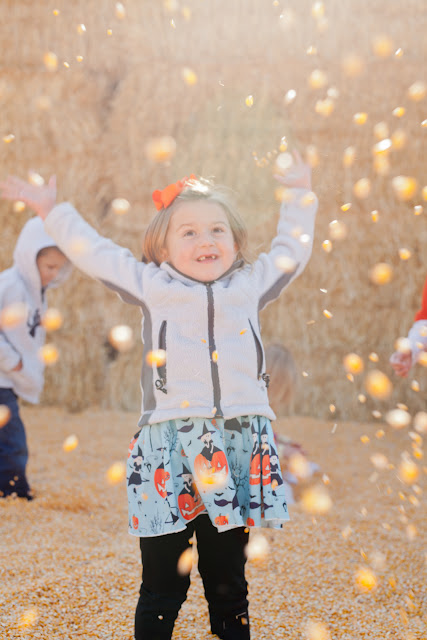 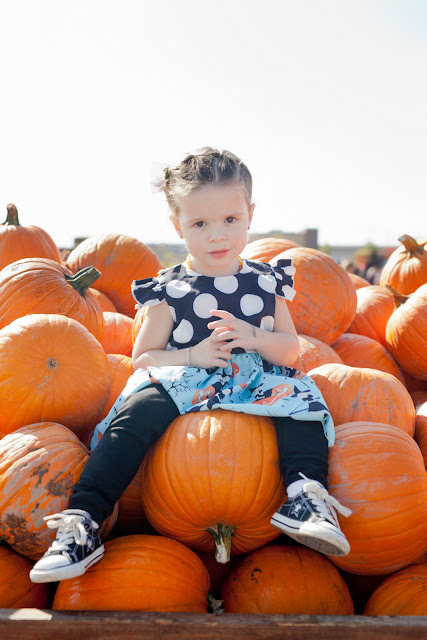 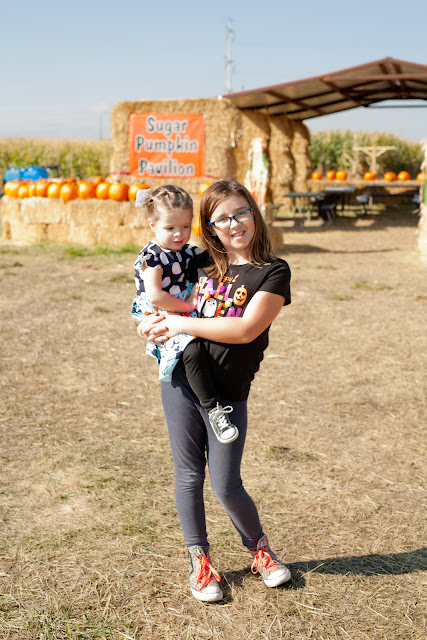 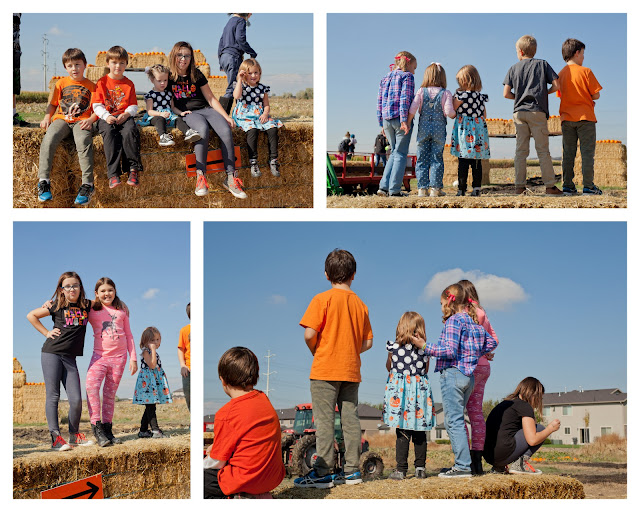 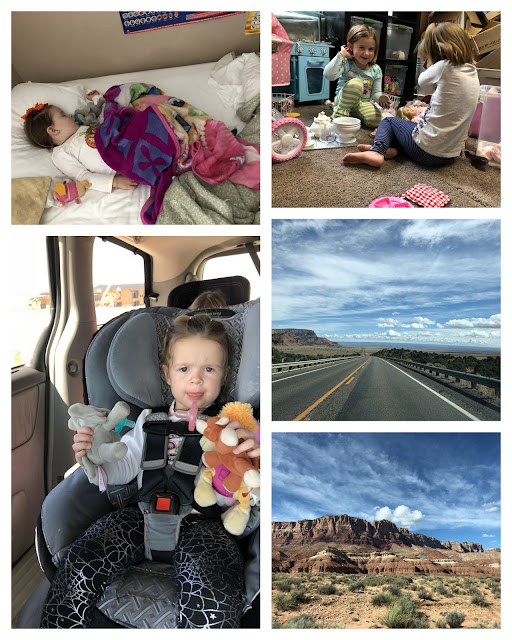 Friday Oct 5th: left for Utah at 1:25 pm. Josie and I packed up the van that morning. Mia had a Greek Feast at 11 for her history class unit end. I brought a platter of gyro meat and pita triangles. I enjoyed watching the 11-12 year olds picking at their plates of strange foods. Mia brought home a tray of figs, yep, we ate those in a matter of minutes. We drove the Vegas way, mostly because I did not want to be winding through canyon roads in the dark, instead we wound through the huge metropolis. We stayed the night in Hurricane at a hotel, took us from 1:30 until 10 pm to drive that far.

Saturday: Josie stuffed her favorite binky into a drawer so it got left at the hotel. I was so not ready to wean her cold turkey, but did not want to drive back 3 hours for the comfort toy. She was elated over the elephant version we picked up at Target. I also found a cute deer footed PJ in Mia's size while out shopping. Back to the drive. We left Hurricane just in time to catch the morning session of conference. Rain followed us the entire drive to Grandma's house. My knuckles were white and my shoulders frozen in a hunch from driving the slick roads. We all exclaimed over the new changes happening this coming year! Two hour church should be amazing. Most of my thoughts that first session centered on how the Lord is urging us to be accountable for our own gospel learning, personal and family. One talk I know made me think of Justin and his struggles with anxiety. We stopped at Fillmore for lunch at a gas station Costa Vida/Burger King. It was nice to get something the kids would eat and a salad for me. The drive seemed to drag on longer than it should. We arrived around 3:15 pm just in time to finish the last few talks of the afternoon session. My Aunt Jan was also at the house with Joana's little boys Benson and Liam. Benson followed around my boys for hours learning the ropes of being a big boy! The boys roamed the back empty lot behind the house collecting rocks, sticks, and junk. Phillip came in quite excited over a chain saw he found, wondering if could "fire" it up and chop something down. Everett was obsessed about picking vegetables for Grandma. Mostly, it was nice to be free from the confines of the van.

Sunday: Watched conference with Mom and Dad, Jonathon, Jan, Julia, and the boys came over before the first session. Jan offered to fix Amelia's hair, she completed a fun elaborate hairstyle with braids and sectioned hair twists. Amelia was able to attend the last session on Sunday at the Conference Center! Aunt Jan had several extra tickets. They bumped into Aunt Laura at the same session. Amelia said it was amazing to attend the live session. She got to experience the fun temple announcements. I was so excited to hear a temple will be built on Praia, CV. So exciting. After the session Laura and  Scott came over for a sibling's dinner. We provided the entertainment. Ha ha. The kids played a silly game in the garage with Grandpa's car cleaning tools. Amelia was a rabid deer (wearing her new footie pjs) and the kids had to rub her belly with the car brushes. Dad thought the kids sounded like a zoo.

Monday: We spent more time at my parent's house than usual this time. It was nice to switch things up. The kids and I headed to Temple Square for the day. We started at the newly renovated Church History museum. The kids and I really loved all the interactive exhibits, the artwork is breathtaking. The kids got to watch an organ recital, Josie was quite unhappy so I enjoyed the concert from outside. Josie spotted a temple decoration on the steeple that looked like a creepy spider. She talked about creepy temple spiders for quite some time. The kids wanted to check out the hand carved wood doors on the temple. Their poses had me cracking up. The reflection pond was a huge hit for Josie. She spent most of the time strapped to my back. We did not have a great night of sleep. Josie was restless and Amelia was sharing with us so it was cramped. Amelia did not appreciate having toes in her nose that night. We walked over to the food court for some lunch. All the kids had Subway, I went for a bite of Chik-fil-a. Holy smokes the kid's play area was completely amazing. It was a dinosaur lovers dream! One part of the carpet depicted a lava pit. Even Josie went about yelling, "floor is LAVA!" I was ready to head back right after lunch but the kids spotted the church office building and wanted to meet the prophet. We did not meet the prophet but did meet several folks who worked there, one man from the music department gave us a CD of children's music. We had the quick tour, just a peek from the observation decks. From the observation deck Amelia noticed that the Conference Center had a garden on the roof. Of course we had to go check that out as well. Cranky Josie finally fell asleep on my back, her head flopped in time with my gait. Our tour guide let us take the short tour as well. All the kids were quite impressed with the immense size of the auditorium. On our way out Everett waved his hand at the guide and said, "Thanks Paul for the nice tour!" Paul and I exchanged puzzled looks until I realized his name tag had his first and last name! How I laughed over that! "Thanks Paul!" We rushed home since all the cousins were at Grandma's house for dinner and FHE. I did not mean to spend that much time but we sure enjoyed every second. Next time we will need to catch the JS building and Brigham Young's home. Jared played Pied Piper with all the kids. He has a magical gift with kids. It was so nice to see all my siblings, minus Jeremy (he's in Jordan). Jana and Melissa both have really cute bellies. Got to hug Joe and Kat. Jeffrey popped out of his room for a while. Dad showed Courtenay and I his intense, complicated series of back torture/exercises.

Tuesday: All my kids came down with runny noses and coughs from the weather changes. We enjoyed a lazy day not doing much. I took Josie and Evelyn to the International Peace Gardens that morning. It was blustery and cold. I sewed up a version of a Spanish Puffball dress to take photos of Josie wearing. She looked darling. We picked up the other kids and Grandma for a visit to see Great-Grandma Baerwaldt. She was getting her bandages changed when we walked in. The kids were shocked to see her large sores that she constantly picks at. We visited for 20 minutes got lots of hugs and kisses. I showed her my newest dress creation. A few weeks ago I woke up suddenly with the thought that she had passed away, thankfully it was only a dream. I was grateful to get a hug and kiss this time. We treated Grandma to Gryos for lunch. Yum. The rest of our afternoon and evening were pretty tame. After dinner we paid Hannah a visit at her home. She was looking out her window when we drove up. Her reaction was so darling. She loved our visit until we walked in her territory and touched her stuff. It was good therapy for her new baby coming.

Wednesday: packed up and headed down to Miekka's for some cousin time. We played at the Curiosity Museum with Courtenay, Jana, and Lia (with kids). I think the zip line was a huge hit. The boys were excited to band together and explore on their own. Lia, Mia, and Emmie went off on their own to play as well. Lia and Mia made lots and lots of slime. Mia tried her hand making butter slime with model magic. Evelyn was thrilled to make her own batch.

Thursday: The kids played all day. We spent some time and Courtnay's since Miekka had home school obligations most of the day. Jared came over and amused the kids. I hear they got yelled at around 9 pm while outside playing night games, some neighbor got grumpy. The ladies and Josie went thrifting for a few hours while Jared watched the kids. Scored the cutest oval frame and some cute clothes.

Friday: played with cousins at the pumpkin patch. The corn pits were a huge hit. I loved that the entrance fee did not break the bank. We had corn kernels in all our places! Josie loved the ducks so much. We had some tacos for lunch then headed back. After a short break we went to a new park in Eagle Mtn. Poor Charlie got his face smashed by a zip line swing. Poor baby!

Saturday (13th): we were headed back for home by 8 am. It was a LOOOOOOOONG drive in one day. Just barely on I-15 a guy flagged me down. My rooftop carrier had popped open and was spewing stuff from inside. I locked down the hatches and tried not to worry about what we lost and if anyone else damaged their cars from our flying debris. Turns out I lost diapers and the stuff we thrifted from DI. Boo. Hoo. Hoooooo. Once again our drive was white knuckled from Hurricane south. We stopped by the hotel and picked up Fox binky for Jojo. This time we drove through Page and Flagstaff. It rained the entire way home after Hurricane. The large semi trucks and Indians in their pickups screaming by made me near shaking! Scary. We pulled in just before 9 pm! Our drive home was an hour shorter than the drive up, we stopped more times on the way up. Still, it takes a good 13-14 hours to make the drive. My eyes seemed permanently peeled open after being wide-awake for so very long.

After that long drive I was in no shape to perform as music leader for Primary. I let the president know on Thursday that I would not be at church. I attended sacrament meeting then went home to rest. I hear that for some reason no one knew I was not coming. I spoke with the President twice and sent reminder texts three times!

***Grandma Debbie introduced us to Daniel's pulse. A guess at the dish Daniel and his friend's ate instead of the King's meals at court. It is quite delicious: OF oats, flax seeds, milled flax, chia seeds, raw sunflower seeds, raw pumpkin seeds, unsweetened coconut, sesame seeds, raw honey, and milk. I'm changing up my diet after a year of low-carb. Going to try this out for a while! I hear you can also make the pulse with various whole grains, served warm or cold, also as a dinner meal with bone broth.