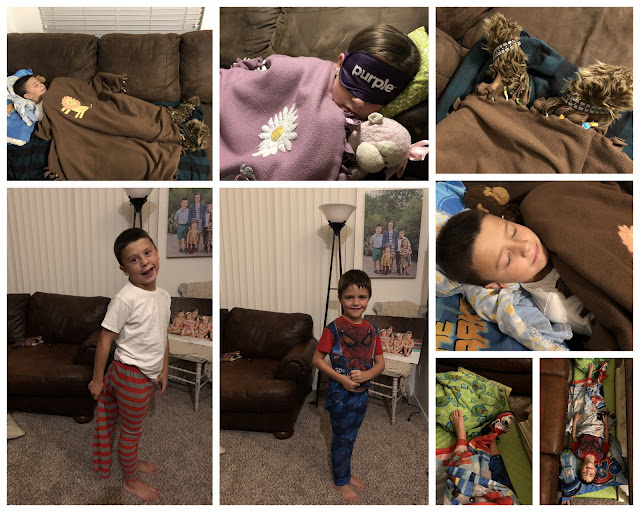 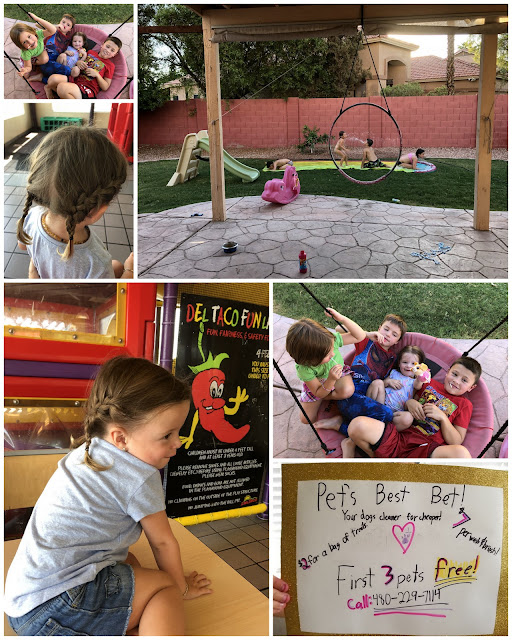 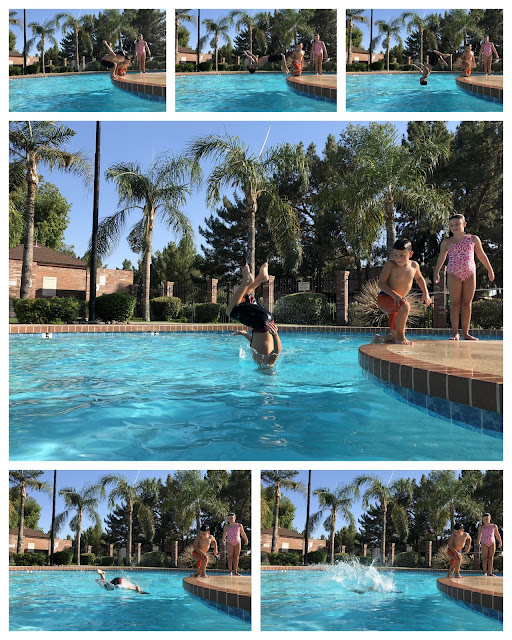 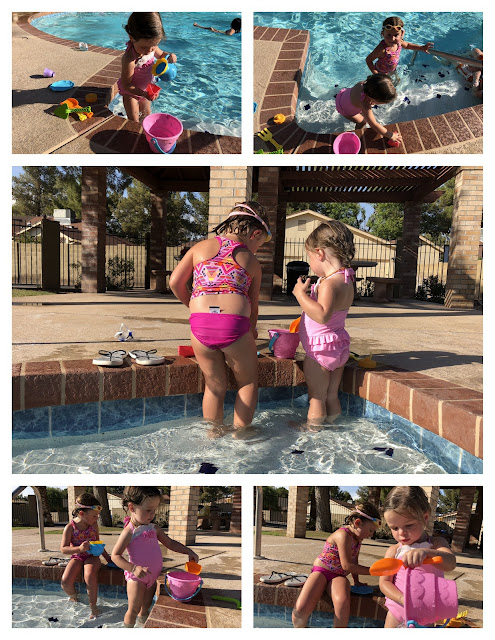 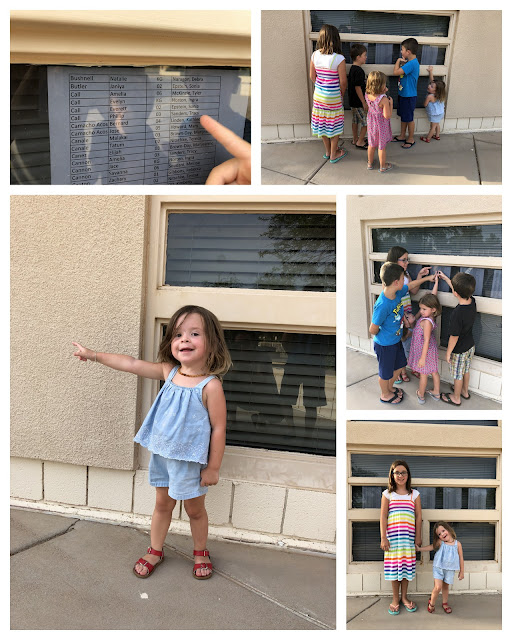 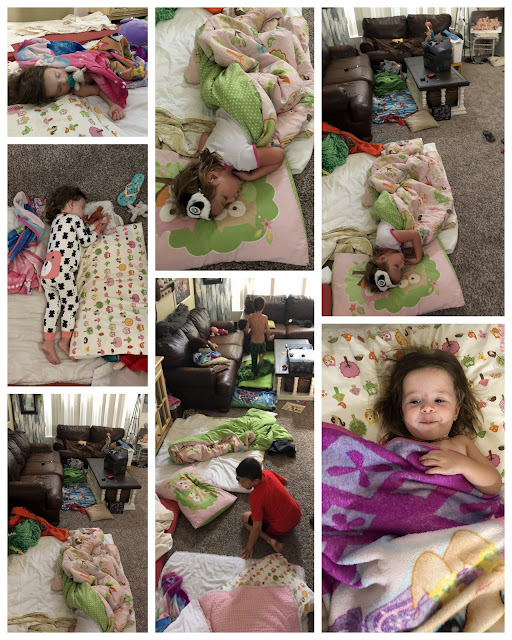 The saga continues. It is quite entertaining, our 1st world problems are overtaking our lives. We started out the week with things under control. The little girls sleeping on the floor in our bedroom with the portable air conditioning. This situation at least provided for Josie's afternoon nap. The air conditioner was overloading the circuit and popped the circuit more than a few times. We decided to bail on the portable since there were no other windows to vent near a circuit with more amps (like the bathroom). Wednesday night found us all camping on the main floor. I had a Dr appointment early on Wednesday, while I was gone Amelia said the air conditioning repair guys came by. I was so mad, since we had an appointment set up for Thursday morning. After a call to the company turns out whomever stopped by was not sent by the folks we're working with. We've been sleeping down on the floor for 4 nights now. We woke up all shades of excited on Thursday knowing the repair company was coming. Our beds were calling. The doorbell rang at 7 am, we rushed the door open to find a pest control company who had the wrong address. Shoot, that meant the little girls lost 90 minutes of sleep. Grrrrr. A couple hours later the repair guy showed up, he left 10 minutes later. His only job was to diagnose and confirm that our unit was not functioning. He put in an order for a new condenser. I was so happy when we got a phone call a few hours later saying that the part we needed was located and the repair would take place the next morning. Hooray! The desk personality told Justin that it looked like the tech ordered the wrong part so he ordered the "right" part. Friday morning was a mirror of Thursday. He came started the repair but had to stop because the desk personality ordered the wrong part. Looks like we get to wait another 3-5 more business days spanning another weekend. By the time our air conditioning gets repaired we will be seasoned indoor campers of 14+ days. I will need a chiropractic adjustment as well. The dog wakes us all up whining way before it's time to arise, Vader can't stand it that Justin is just 4 feet away. His tags jingle and jangle us all awake. Everyone's walking around with a fuse 4 times shorter than normal. I hope we don't blow up before school starts. I really wanted to have a normal routine for a couple days before school starts.

I also happened to catch Everett and Josie's digestive bug on Monday. I ran a high fever, was practically delirious for two days. I lost 10 lbs just from the digestive problems, wish losing weight was that simple. During the twilight hours of Monday night the nausea resolved into something more meaningful at the same time my digestive tract was playing it's games. Lovely. Being a mother on Tuesday sat in the back row of our bus. Amelia helped make pancakes for breakfast. The rest of the day I worked on laundry from the couch. I started to feel like myself on Thursday or Friday.

We did not do much this week. The kids got to play at the Russo's on Tuesday. They came home to find Josie and I playing in the little pools with the hose. Josie was content to fill up the pools and have some one-on-one time. The kids decided going swimming in their undies would be much more fun than using swimsuits! Indeed it was much more fun. I set up the slip and slide as well in order to extend outside play. We watched too much TV this week. It's way too hot outside to play and going elsewhere to play is always expensive. The kids are sick of swimming so we only went swimming 4 times this week. Once at Mesquite Pool and twice at the community pool that friends let us use on occasion. Josie started diving to the pool bottom to fetch rocks on Thursday! She reminded me of a baby otter diving happily for shells. Her little face pops out of the water with a face full of smiles! She will also jump into the water instead of jumping into my arms now. I am amazed at her transformation: from terrified to a baby otter! Evelyn is completely flotation device free! She needs a spot of help now and again but she is a darn good swimmer. Everett surprised us all by doing back flips off the side off the pool. He spent a good hour on the diving board at Mesquite just diving and learning to back dive all on his own! Everett is that magical middle child who thrives with little to no maintenance.

Friday felt so frustrating. I went to Walmart to return a window air conditioning unit I purchased for Josie's room. At Customer Service I realized the return receipt was not in my wallet. I convinced the manager to accept the return and waive store policy. He did. Phew. They just needed my driver's licence. No problem! Shoot, my driver's license was missing. The boys used it to borrow rackets at the rec center, we forgot to get my license back. So frustrating. My favorite birkenstock sandals decided to snap the toe thong this week. I was in a mood to send the company a complaint email about my disappointment. Mia earned $10 for babysitting for over two hours, I had a 6-week touch up appointment for my amazing eyebrows. I desperately needed the alone time! Alexis let me whine my mouth off while she tweaked my eyebrows.

We delivered dinner to the Boyle family. Ashley is expecting her 4th baby, but has terrible HG (severe morning sickness) for the first 20+ weeks. Her MIL was in town for 4 weeks to help relieve some of the strain. She left two weeks ago so we, her ward, could finally help her out. The kids helped me make Hawaiian haystacks and deliver the meal. They also have three small kids under age 5, a kid every 2 years. No wonder I am so tired! I forgot already how dynamics change with your oldest still under 5. I felt crazy and now know, we looked crazy! It does get better! Look at us, we almost have a 12 year old! Serving someone else felt so good, to step outside our hot mess for a moment or two and into someone else's life.

The kids were excited to find out their teachers for this coming year. Amelia (and Brooklyn) have Mr McKinzie. She is scared of her new teacher, but I hear amazing things about his methods and capabilities. Phillip will be with Mrs Sanders. Everett has Mrs Epstein (same teacher Phillip had). Evelyn has Mrs Norton. We have all the supplies, or so I thought. The school website has multiple lists but none are the same. Looks like I chose the wrong list to shop from. Makes me steamed to buy the wrong items! That's money folks! I think someone typed in the wrong amount of tissue boxes for the 6th graders, 12 boxes per kid? Yikes. They could build a tissue box wall with that number. I need to regroup and shop from my stash before going to the store for more stuff. I ordered some folders and sharpies for Mia but we cannot find them anywhere.

Saturday morning we spent cleaning up the disaster mess accumulated through my illness, recovery, and the events of living in temporary quarters. The kids started whining but eventually lost interest knowing I was not going to budge. We got the cleaning done before Justin got back from another early morning job interview. He is not enjoying the interim CFO at work. Justin's looking for work elsewhere. We are hoping to either get him closer to home or move again. Things could also change at work but it's not looking likely. This month so far was especially annoying for Justin. It is busy and his new boss is constantly asking for items last moment, which makes Justin stay late at work, miss lunch, or down a bottle of tums. He's had several interesting job interviews. We have to keep the crazy train going.

Phillip fit both his legs into one pajama pant leg. He is always catching me off guard, making me laugh. That boy is a natural comic. He adores his thrifted Chewie slippers. We love his strange sense of humor. This week he taught himself to spit/stream water through the gap in his front teeth. He still has not learned to armpit fart, so some skills are still lacking.