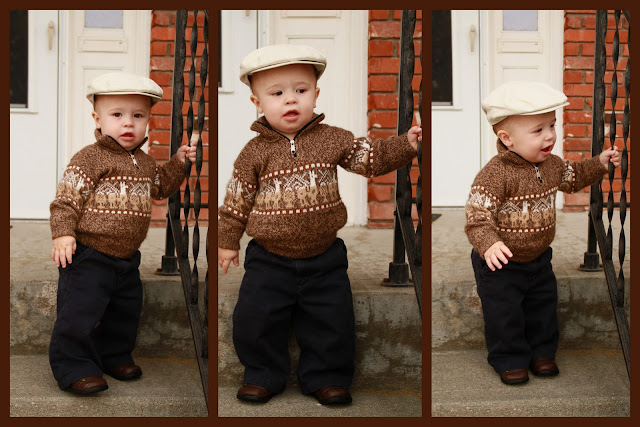 Phillip wearing the sweater Grandpa Call got him in Peru earlier this year, he is so handsome!
We've had a lazy week! Justin celebrated his 35th birthday on Monday. Amelia was so excited about that. I got up early and went to the doughnut store for a rare breakfast treat. Justin's doughnut had a candle in the middle! We had lunch at McDonalds, Justin wanted the McRib. Then off to Cabela's so Amelia could get Justin a gift. I called the Walmart in Scottsbluff to see if someone located Amelia's reindeer. Her lovey toy was sitting in lost and found! We can pick her up from the "Walmart Hotel" in a couple weeks. Hooray. We still got Fork, the girl reindeer a twin sister, Apple to tide her over. Poor Moose and Avena (a dolly) did not make the cut. Amelia and Phillip helped me make birthday brownies for Justin. Justin was so glad to enjoy a day at home with me and the kids.

Amelia enjoyed Preschool this week. Rose taught the kids about Thanksgiving and Pilgrims. Amelia is now in love with their dog, Duncan. She wants a dog named Fish now. I about died laughing over a list of what she is thankful for:

Crack me up kid!

Phillip ran a fever most of the week, has a nasty diaper rash, booger nose, diarrhea, excessive spit up, and cough. I think he started out teething but the cold weather turned the runny nose into a cold. Poor kid tries to toddle around until I pick him up. Mainly, I've been a Phillip-holder this week. He snuggled with me on the couch with a blanket and binky for a couple days now. I think he is finally on the mend now that his fever abated. His bottom gums look a smidgen swollen.

Justin is elated with his first big game kill. He went out Saturday with no luck. Yesterday he put in a half day at work and then went out by himself. He downed a 4 by 5 buck around pm. I think he does better out on his own with no pressure. Justin reports that gutting the deer smelled as gross as he anticipated. While he was gutting it another buck came within 50 yards, tempting to pull another shot but not legal. Matt Haley helped Justin get the deer back to Sidney after work. The guys worked on skinning and prepping the deer until after midnight. He stayed home today just to burn days off. It was nice to have him around helping with dishes, playing with the kids, and letting me take a nice nap. The deer will cure for a couple days then Justin will need to process the meat. It might be time to consider a deep freezer?!

I worked on a processing a couple photo shoots this week. I had a major frustration when an expensive print came back from my printer with a horrible color cast and red teeth on the kids. I spent a couple days on the phone getting the issue figured out. Course, it all comes down to me not having the right equipment and right calibration for my monitor. I invested in a monitor color calibrator but it was not the right model, which cost $200 more than the one I have. My monitor will not allow for precise color manipulation by me so I am sort of stuck. It all comes down to having a much lighter hand on my edits and getting the photo right in the camera. I don't know why I still struggle with this same issue. At least my printer will let me recalibrate on my end. If I had a million dollars...I'd have more work, right? LOL. My uncle Scott nearly made me cry last week. He said that my skills are vastly improving and I have what it takes to succeed. Coming from an artist and photographer that was an amazing compliment. I think a new computer is in my future! Just a couple more photo sessions and a lot more piano lessons. One day at a time! Other than the photo stuff I completed several sewing and crochet orders. Justin and I finished Season 7 of 24 while I did the crocheting. I can't believe Thanksgiving is next week. Will someone come cook a nice meal for me? I am so not in the mood to cook right now. We may end up having pancakes for Turkey Day.