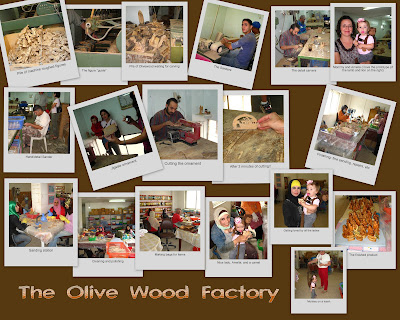 This morning we met up with Shannon and three of her friends at the Olive Wood Factory here in Amman. Sam gave us a tour of the place. We started at the ground floor, where the wood is cut into blank blocks, the a basic figure is turned on a lathe built for 8 blocks at a time. The wood is purchased once a year after the olives are harvested. If a tree is not producing well the farmer cuts the tree down with a meter long trunk left. The tree will regenerate from the trunk. None of the wood is purchased by trees being destroyed! The figure is sent to sanding then upstairs of the cutting station to another cutting and sanding station. This station is for detailed work done with dental attachments on a dremel tool. One gentleman demonstrated the process on a little angel in less than 5 minutes. I was amazed at how fast he work. The same guy cut out a one dimensional ornament of Noah's Ark on a jigsaw...lickety split. Sam lead us outside and up another stairway to a third floor, where all the women work. The women did the fine sanding, shaping, polishing, and fixing of the figures. Amelia saw a camel and sheep and made a strange braying, mixing the two noises. The ladies were delighted with her, especially once she starting blowing kisses. The final phase was to flatten our wallets at the little shop. I had a great time! Most of the workers were either deaf, maimed, or possessed a disability. If you want to check out their products their website is www.holylanddesigns.net

Yesterday Courtenay, John's wife, arrived fresh from SLC. LOL! She looked pretty tired. Around 5:30 I attended a BYU Alumni party hosted by Elders Holland & Snow at the local chapel. Elder Holland dedicated the same chapel we met in about 23 years ago. He was so delighted to be back. Only a handful of people were at the party when I got there. Elder Holland showed up 5 minutes later. He walked straight over to me cupped the back of my head and tousled my hair, asking if I was a good girl and enjoying the shady tree I sat under. I believe some muttering sounds came from my mouth. He brought a super-charge level of energy into the party. His booming voice and outgoing personality dominated. An hour later there were so many people milling about it was hard to find purchase. Apparently, BYU and Jordan have an agreement to send 5-10 students over each year. More than half the attendees were Jordanian!

Around 7 pm we gathered in the chapel for a fireside. The Snow's spoke first. President Leavitt announced that Courtenay Lance would then bear her testimony! Lucky gal. Her testimony was awesome to hear. We also heard from a young man preparing for his mission. Elder and Sister Holland spoke last. Much to my dismay I missed most of the fireside trying to amuse Amelia and keep her quiet. She learned how to plug her nose with her thumb and forefinfer...during the fireside. Each time she plugged her nose she would gag. I was trying so hard to not laugh at her little antics. Ths spirit was strong and we were all enriched by the testimonies borne.

Posted by Jenni Call at 6:38 AM 0 Stupendous Remarks