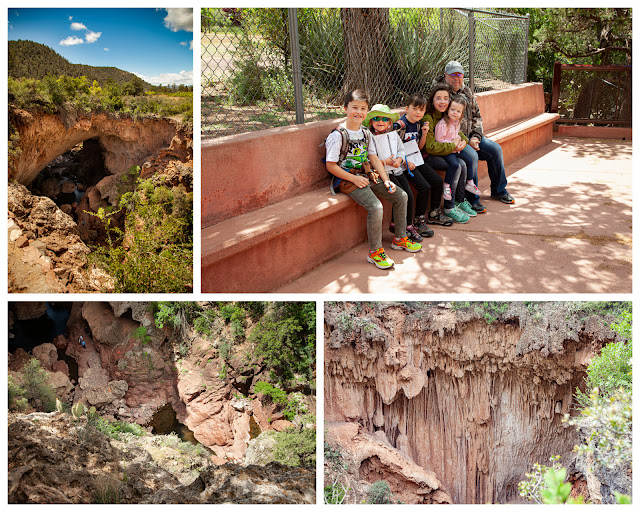 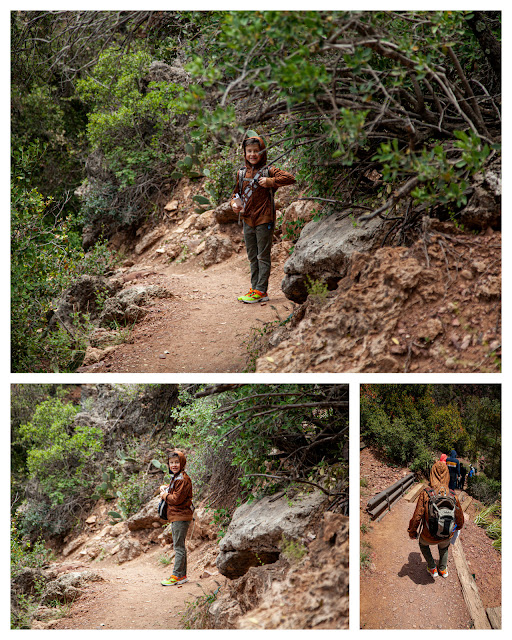 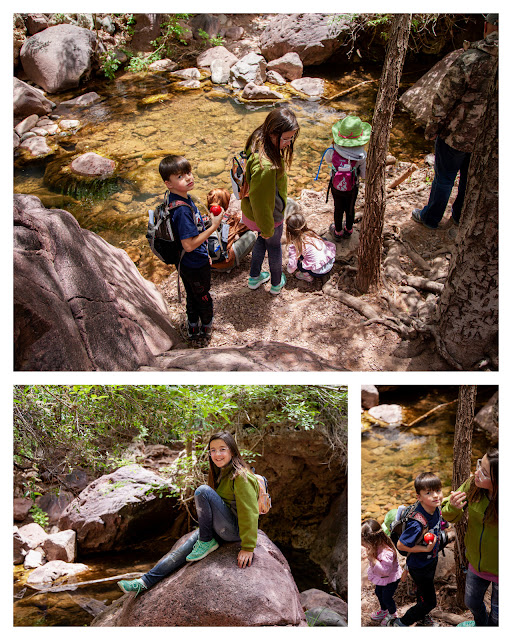 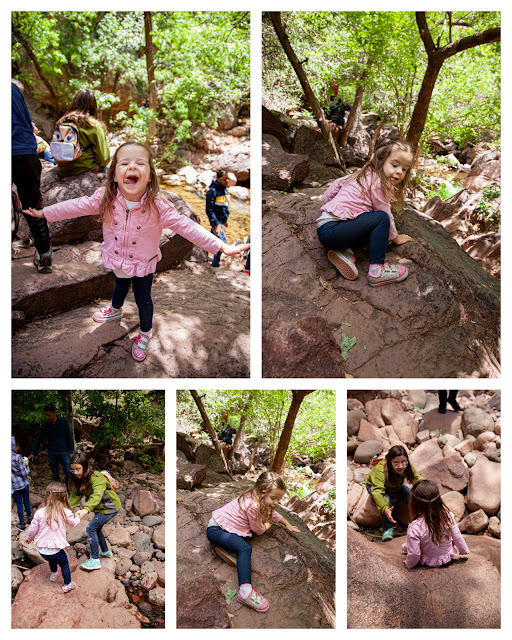 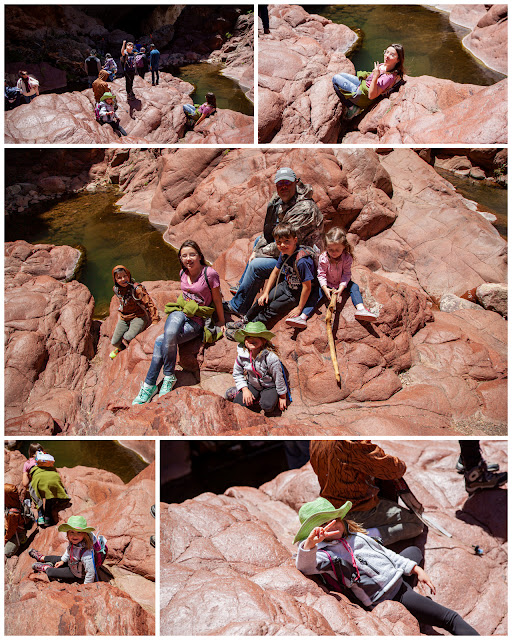 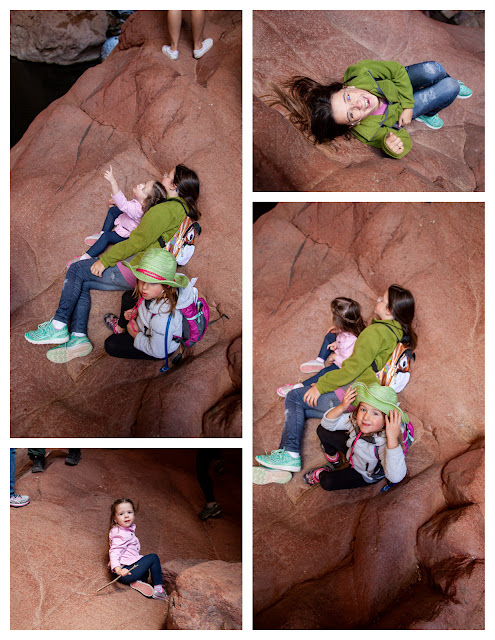 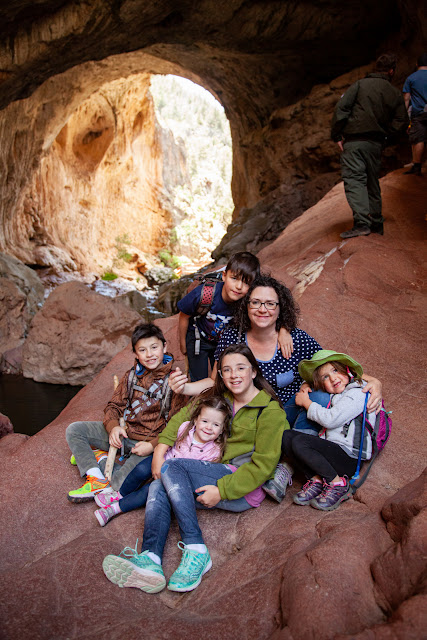 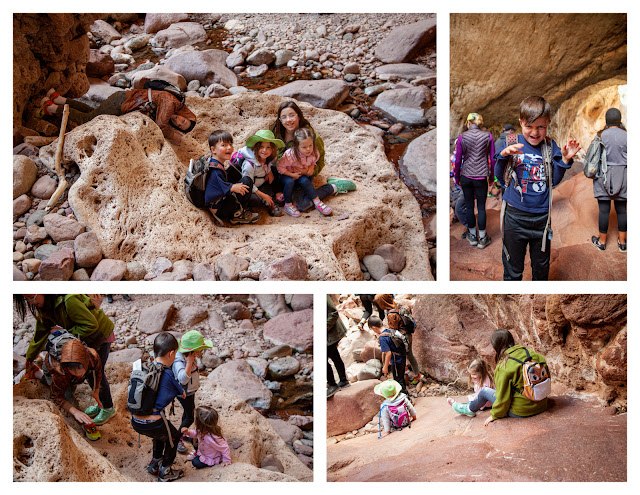 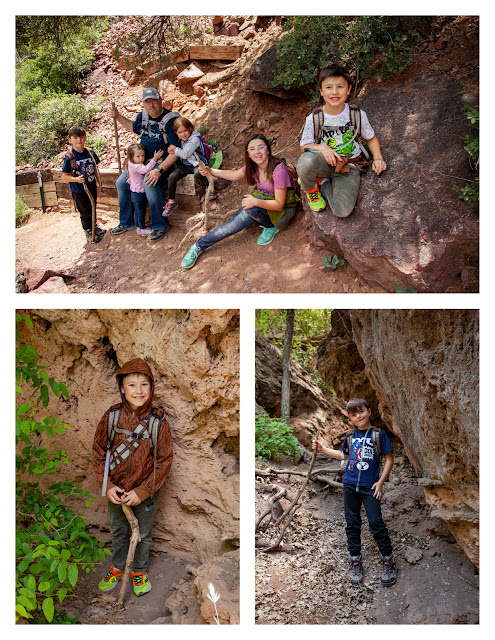 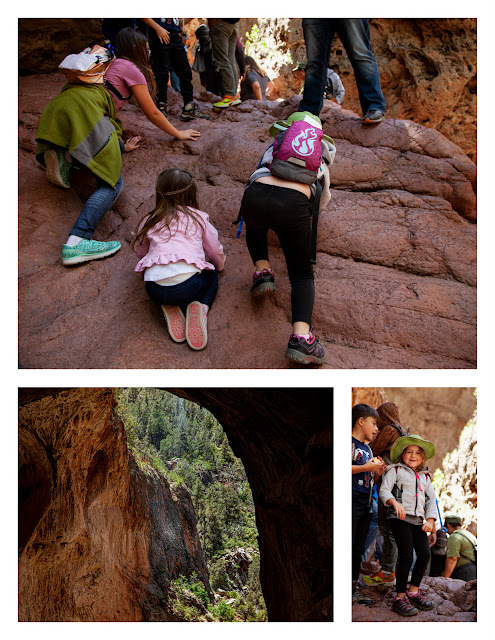 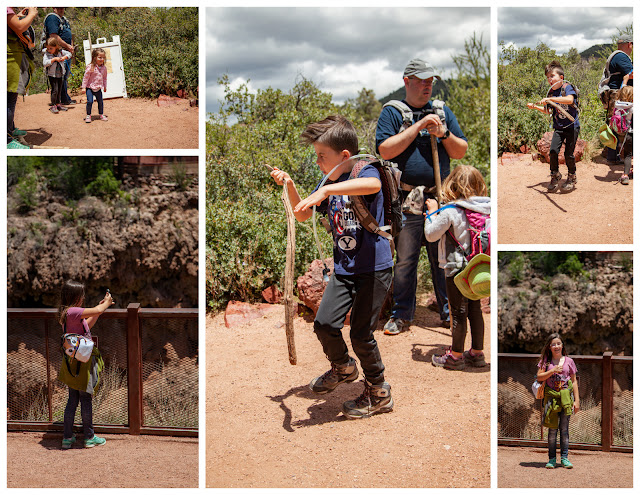 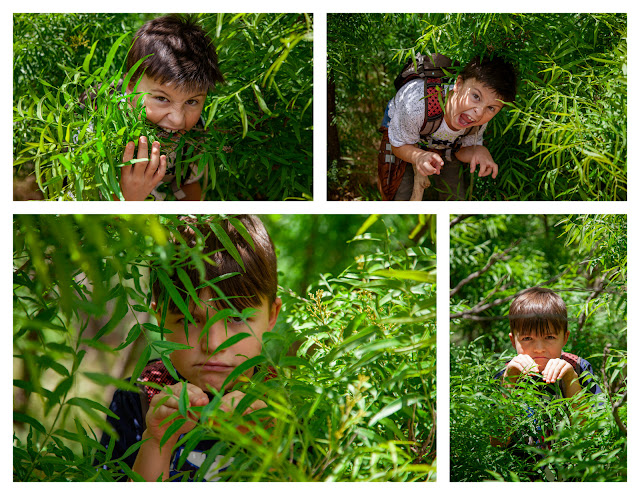 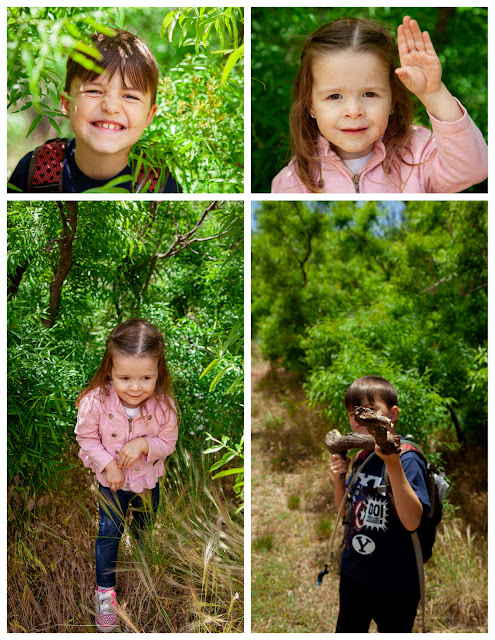 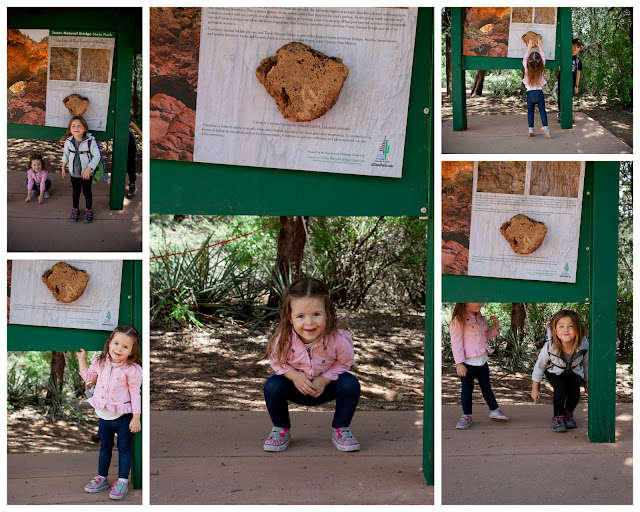 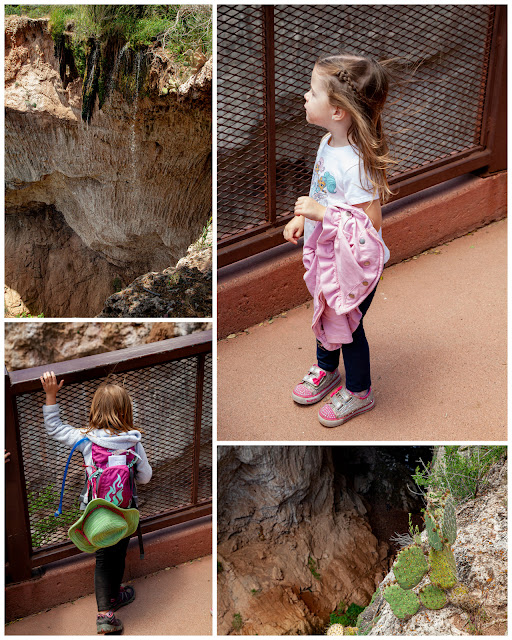 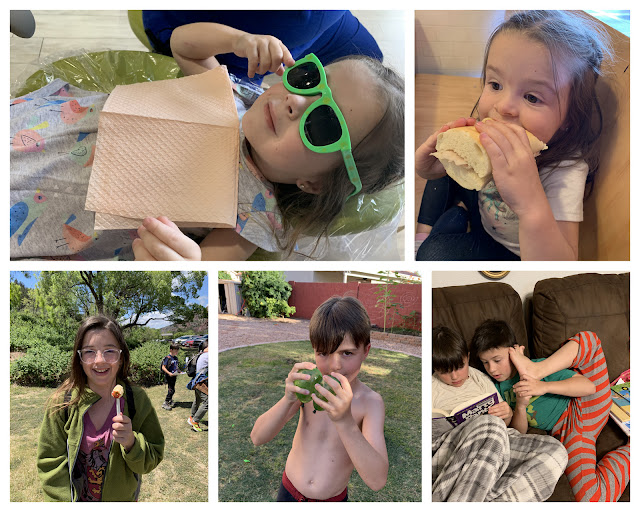 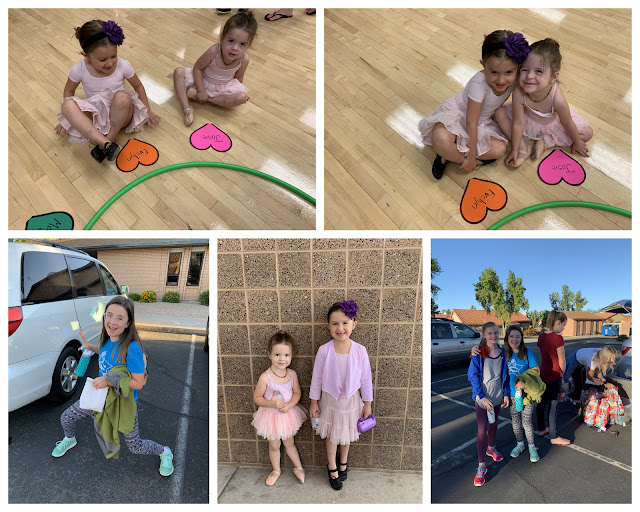 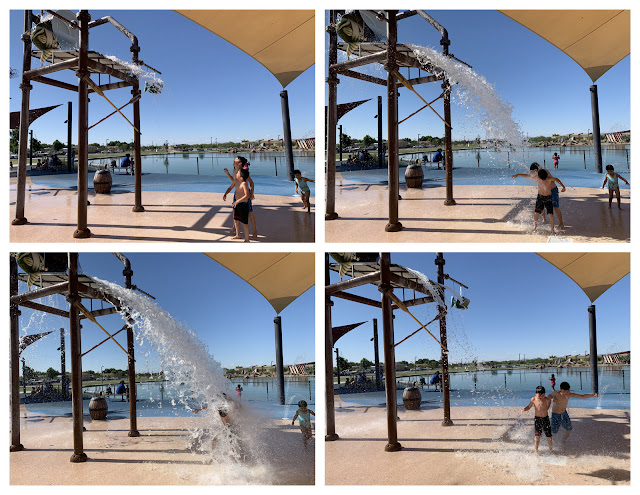 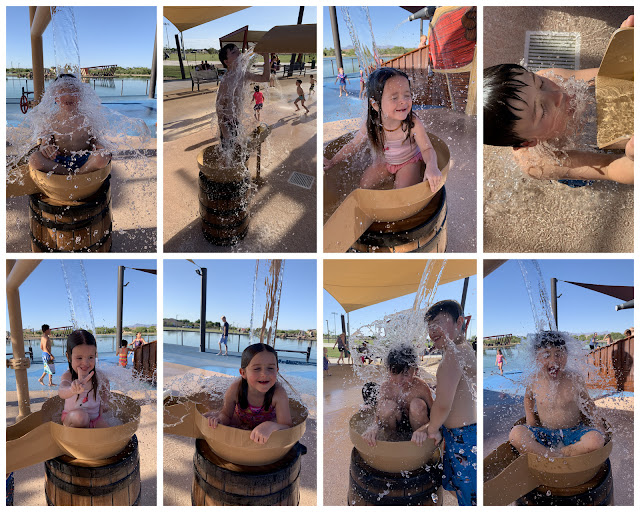 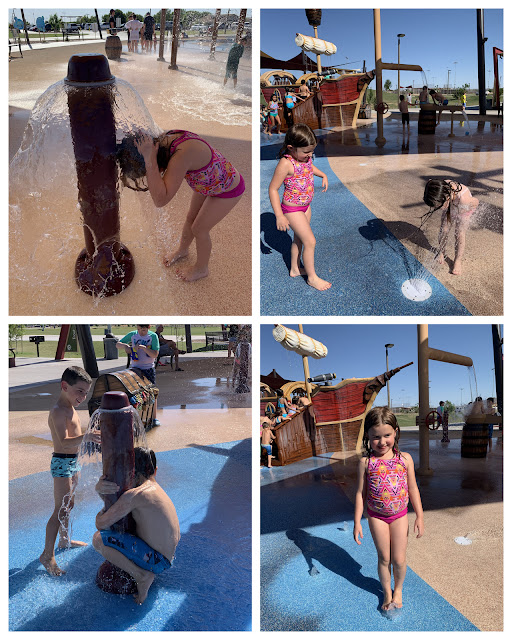 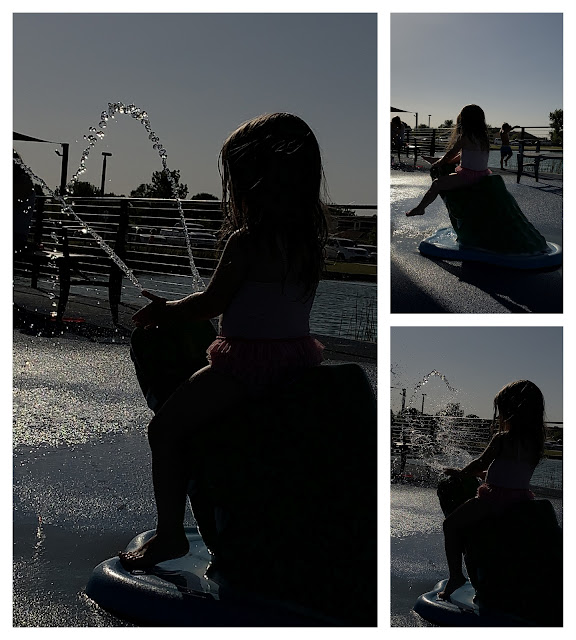 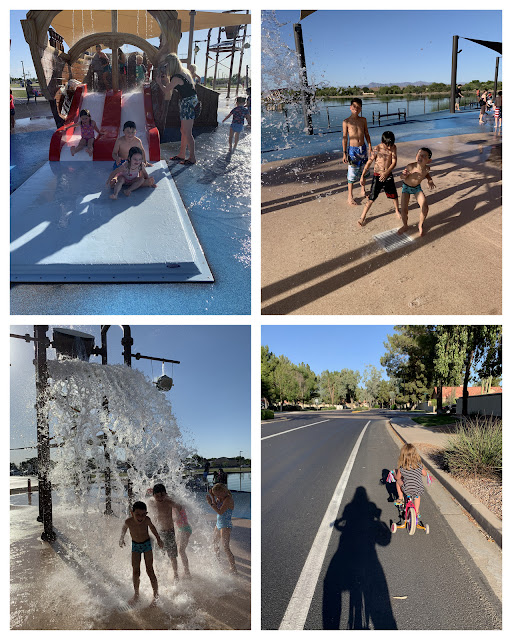 We did it! Finally! I've had a bee in my bonnet to hike Tonto Natural Bridge for nearly two years now. Something always cropped up at the last moment preventing us from going. Saturday I told Justin my plan and we made it happen! Amelia was super cranky, she wanted to sleep in, which she never does. I was sure the trip was headed towards disaster but sister pulled it together. We left home around 9 am, got there after 11. Amelia made an apple pen, she was laughing her head off singing pen-pineapple-apple-pen right in the parking lot. Twelve year old humor is quite odd, she's also taken to snorting like a pig just to be silly. It was quite chilly, those who had jackets kept them on. Those who forgot (Everett and I) tried to ignore the freezing wind. We checked out the view from the top. I convinced Justin we really wanted to hike down to the falls. I thought the hike down and up was quite fun. The kids found favorite hiking sticks along the way. We clambered over bounders, forded streams, and enjoyed the warm areas of sunshine. I so loved watching Amelia help her little sisters over the steeper parts. Josie adores her Amelia. The boys were off on grand adventures scouting ahead and clearing the way. From the bottom the falls are mostly a wind-blown stream that trickles into the canyon below. The main viewing platform is closed for two years of renovation. Everett got quite cold so pulled his arms into his shirt giving him raptor arms. He thought that was hilarious. The kids found a natural bowl, Phillip enacted the part of a fork, the other kids were soup ingredients. We found a couple caves along the way. Phillip wanted to scale down a cliff, Justin talked him down and made him walked the long way back. Josie and Evelyn made the trek back up with only minor complaining. My constant mantra was "way to go" and "you can do hard things." I tried to get Josie to do a victory dance, Everett ended up dancing the dance instead. We found a grove of really green trees, Phillip was a raptor eating the tree branches with his raptor arms. Everett and Josie followed suit, pretending to be dinosaurs. We took another path and checked out the falls from the outside view on the platform side of the bridge. The kids were ravenous by this point, no amount of apples or crackers would assuage the beasts. We left in search of Jimmy Johns. Josie nearly ate an entire 12 in sandwich on her own! Felt good to check that off my list. We even made it a family event, double check. We enjoyed a light meal of cereal for dinner instead of the lovely BBQ meal I had ready to grill. Lunch proved to be extra filling and we ate quite late. Amelia and I made a quick trip to Walmart for water shoes and other items on her camp list we needed to purchase.

Tuesday the boys and Josie had dental exams. All three kids made it on the no-cavity wall. Josie was quite the amazing patient. She opened wide and was finished after just 8 minutes. She was pleased to earn her own prize this time around. Everett led the way for a 300 water balloon fight in the backyard. He was quite bossy with his collection of balloons. I had to settle several spats between Everett and the other kids. Course we had an extra 3-4 kids over to play as well. Amelia worked on packing her bags for girl's camp. She saved most of the packing until well after 8 pm, much to my dismay. We miscommunicated, I thought she was mostly packed. Instead she mostly packed her clothes. Also the kids and I did an exercise video together, ended up with the sorest quads and bum muscles for days. I could barely get myself up and down the stairs without crying. Felt like a total loser for not making it though one measly workout.

Amelia and I slept poorly, excited for her first ever girl's camp, we were at the church 30 minutes before everyone else started to arrive at 6:15. I kissed that girl and wished her a lovely time! Back at home I knew there was no more sleep for me. I took a nice long walk about the circle. The little girls started ballet with the same teacher Josie had last "term." It's much easier to attend class with an older sibling. I just hope Evelyn is not overly bossy with Josie, who does not appreciate being pushed and pulled about. The girls were happy to don leotards and tutus, wear their hair in buns, and prance about in ballet slippers. I got more information about the fitness center. I'm going to get a 3 month membership, try it out for a bit. I gotta get this body whipped into some kind of shape. I'm not sure I could walk to Zion in my current position. Ha ha. My legs did not recover for 3 days.

Thursday we checked out a new splash pad in Queen Creek. I told the kids we would go play after nap. Josie woke up from her nap so fast, she zinged out of bed, and right into the van. We took our neighbor friend Aiden (Gabi's brother) with us to play. The splash pad was so much fun! It has a large pirate ship slide in the center and lots of little centers with water features. Just up the hill is another covered play ground. The kids went from the play ground to the water and back several times. Everett managed to forget he had undies on. He removed them solo without flashing anyone! All the kids thought the best part was sitting in the tray thing right under a fall of water. If your back was in just the right place the water sprayed to the sides just like wings. We stayed until our snacks and water ran out. I stopped on the way home for a rotisserie chicken, easier than waiting the hour to thaw and cook chicken. Our house is in full summer mode. Mostly crazy, half way clean, mostly not. Yah know, whatever goes. I mailed off my camera and sigma lens so the lens could get calibrated to my new camera. I was never really satisfied with the lens from the beginning. Hoping I can use it again soon. I also got our summer day themes and daily check lists figured out and laminated. Our themes this year include: Make-it Monday, Library Tuesday, Water Wednesday, Trip Thursday, and Friend Friday. The kids are whining about how much they have to do on their checklists! YES! That means I have it just right. Make it HARD to earn a little device time. Phillip earned two little toys for babysitting for me while Evelyn and I went back to the dentist for a small filling she had. Evelyn was a total rock star. She kept her mouth open and was done in less than 5 minutes. Guess that filling was only surface work! The dentist did not even put her tooth to sleep. Evelyn was quite relieved to have that put to rest, she's quit chewy candy for the time being. She'd rather avoid another cavity.

Friday we rode our bikes to escort the boys to karate. I took Evelyn, Josie, and Aiden to the park for the hour the boys were at karate. Evelyn whined the entire ride, "my bum hurts, my legs hurt, I'm thirsty, I have to pee!" I think she needs to learn how to ride without her training wheels, slows her down. Once at the park she rallied with some crackers and lots of water. Justin rescued her towards the end of our ride, she had to pee quite badly. We made it! The boys started cleaning up the water balloons and straightening the yard mess.

We did quick work of the yard and house work Saturday morning. Even got it all done before Amelia got back home. Josie was so excited when Amelia walked in she tumbled down the stairs trying to get to Mia. We heard all about camp in less than 10 minutes of really fast chattering and lots of smiles! Amelia had a great time, cannot wait to return next year. She was exited her friend Ruby was at camp with her. The leaders did such a great job, so much work goes into camp, but the results are ever so amazing. We earned some slurpees for working hard, especially the boys out in the hot yard. Amelia's fuse snapped during lunch. Evelyn was humming, probably just because but kept at it much to Amelia's annoyance. Soon we had wailing and gnashing of teeth. Our house was quiet and free of hitting and fighting, I did not realize how much of the contention is created by Amelia! What Mia really needed was a nap. Recharge those batteries after a few days of not sleeping well. I got a couple hours worth of thrifting in during nap time. I took over a load of donations and then looked about DI and Goodwill just for kicks and giggles. Justin grilled up some BBQ pork for dinner. Yum.

Today I actually fasted and felt pretty darn good. I've not felt good while fasting since I started having my babies. Seriously, felt like a relief to truly fast! I love fasting, love the peace in my heart it brings. We had our Call family dinner this month at our home. I made an Italian Antipasto salad, pretty much just antipasto cheeses, meats, and olives over lettuce with dressing. Laura brought bread. We added a new cousin of sorts to our mix, Wendy Call-Kechley, Husband Tyler, and two darling teen girls. The girl fit right into our crazy bunch. We loved hearing about the Kechley clan's wandering about Europe for 3 months! Makes me a bit stir crazy to get back out to Europe, it's a lovely place to be.