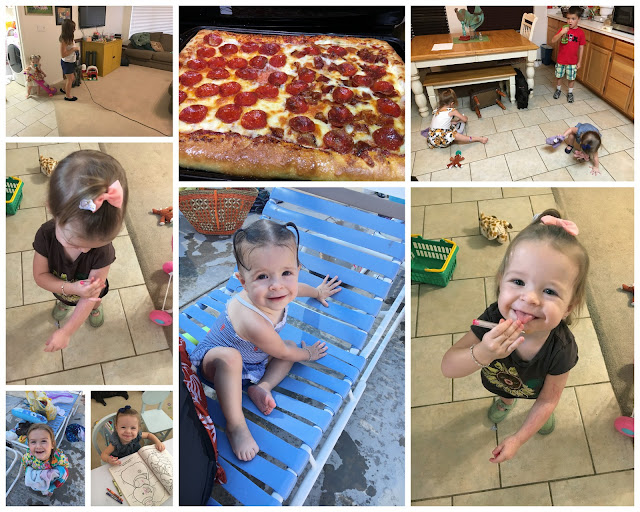 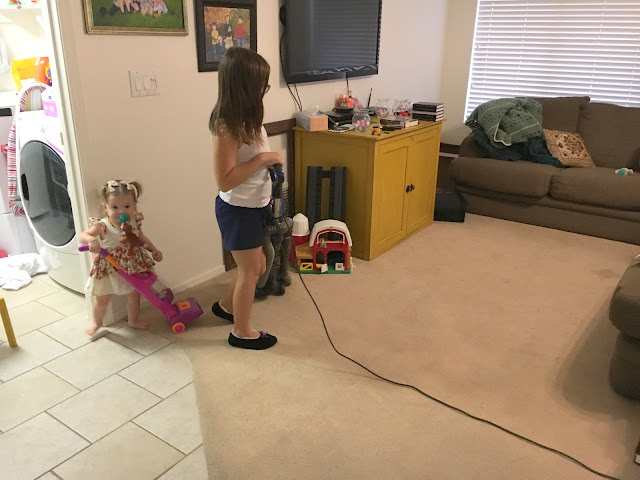 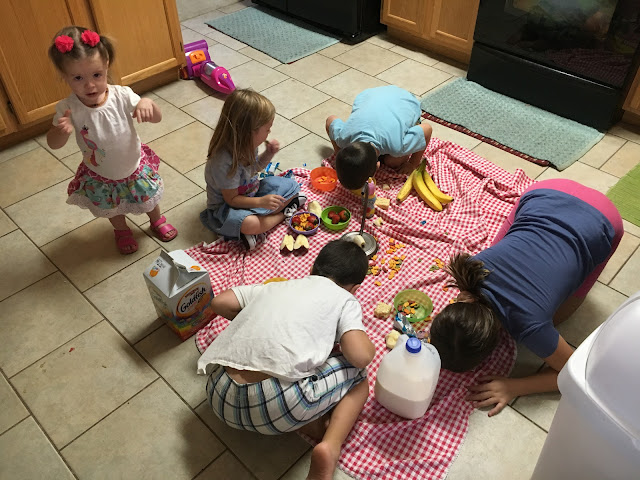 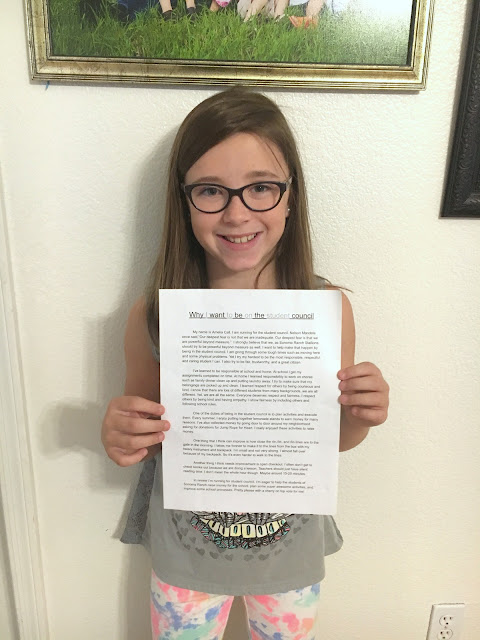 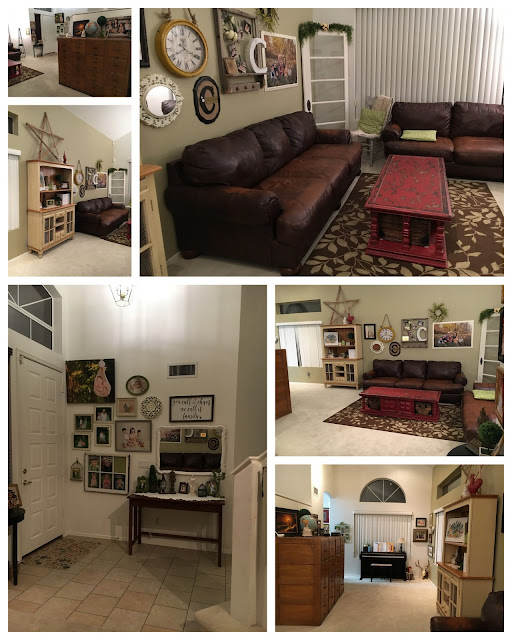 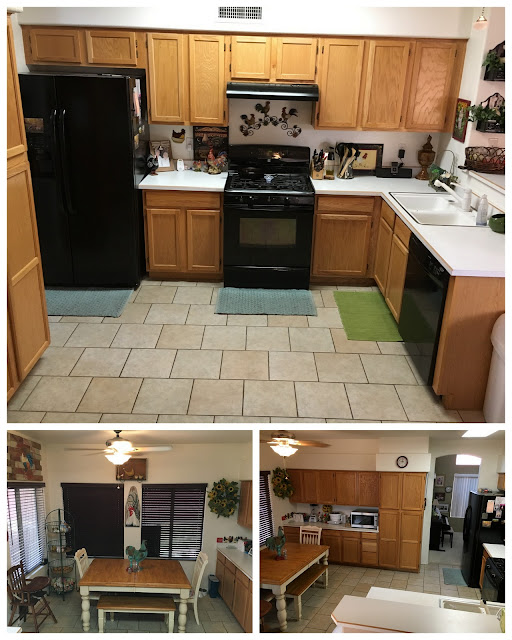 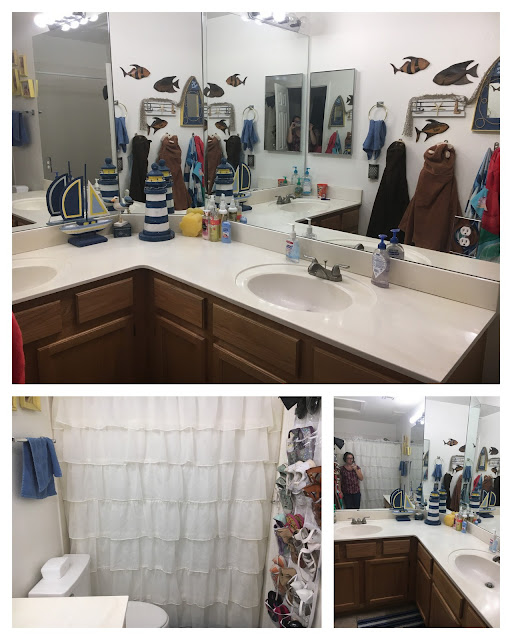 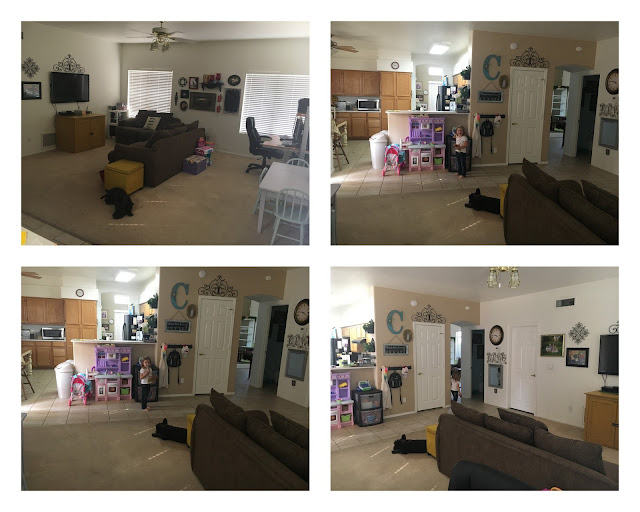 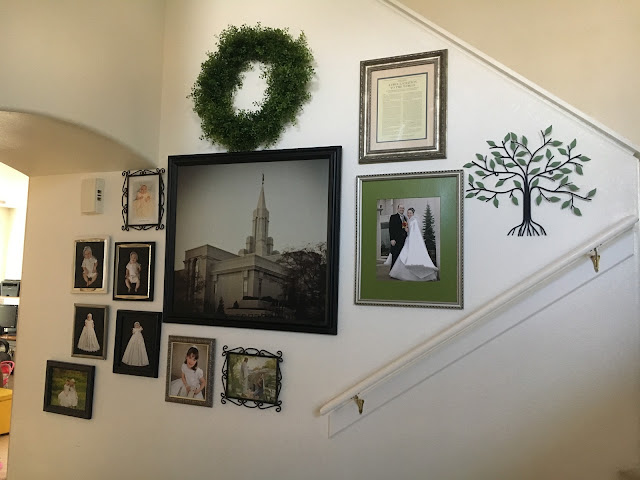 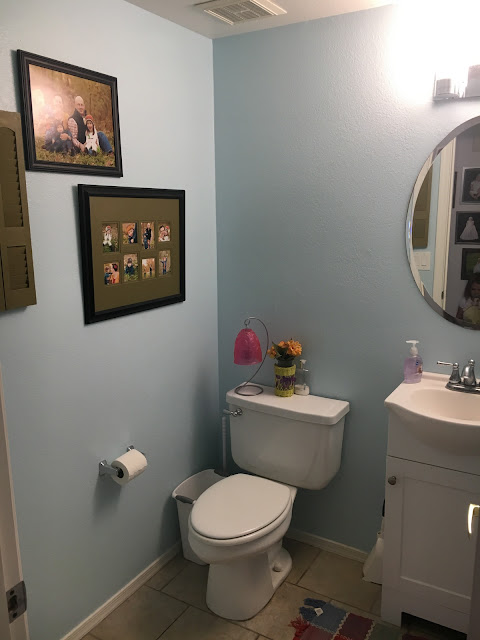 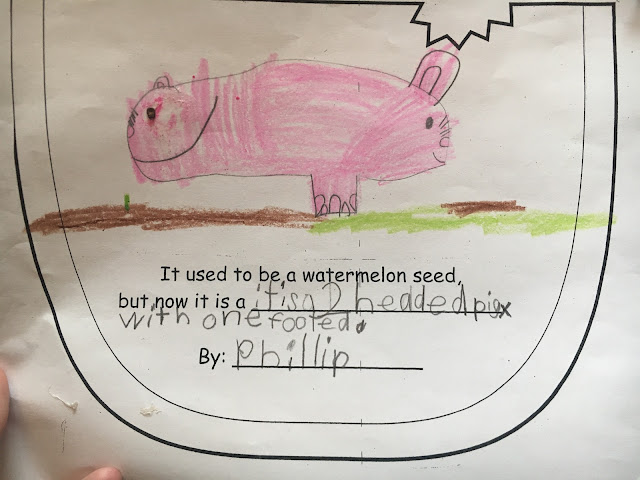 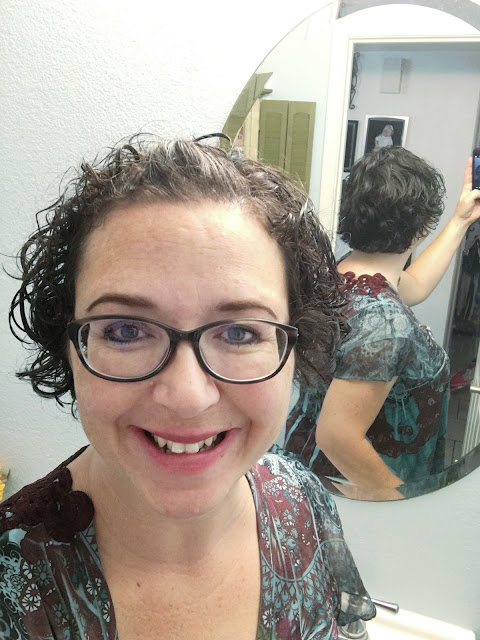 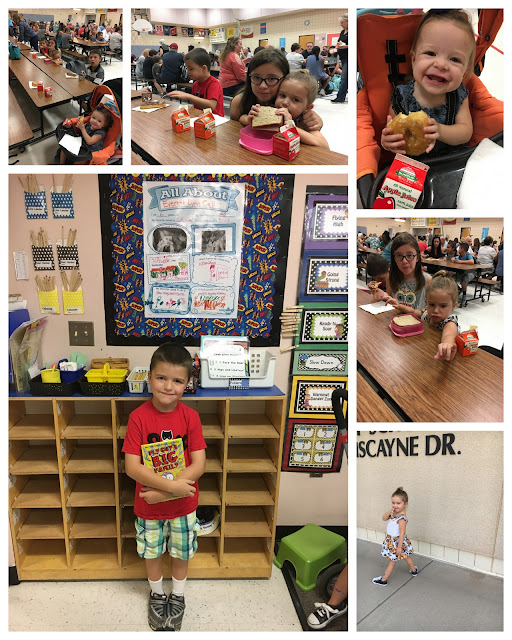 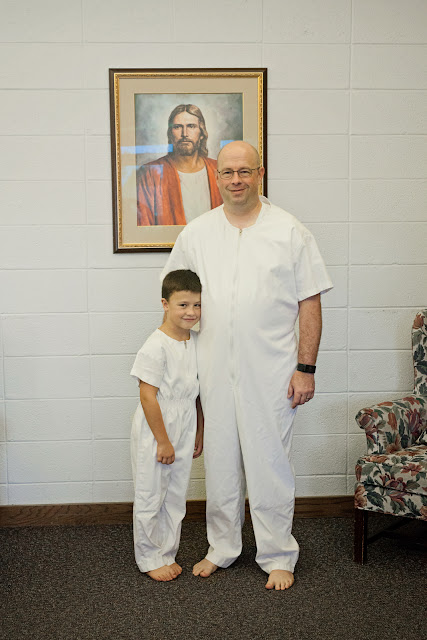 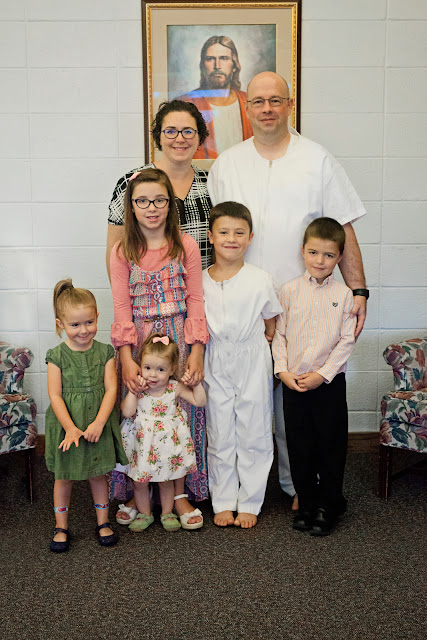 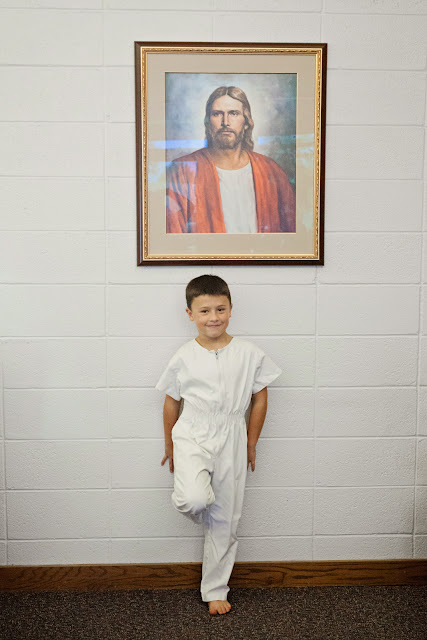 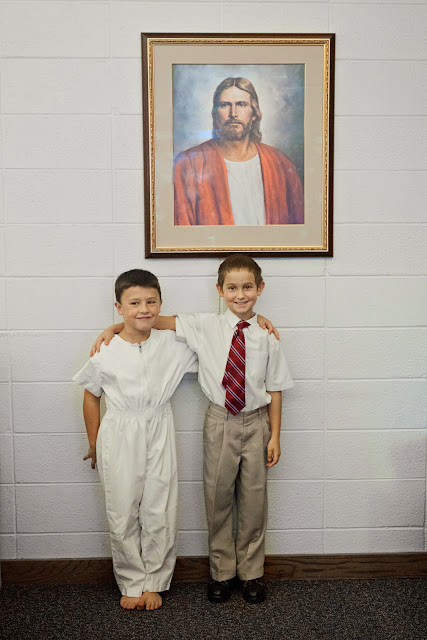 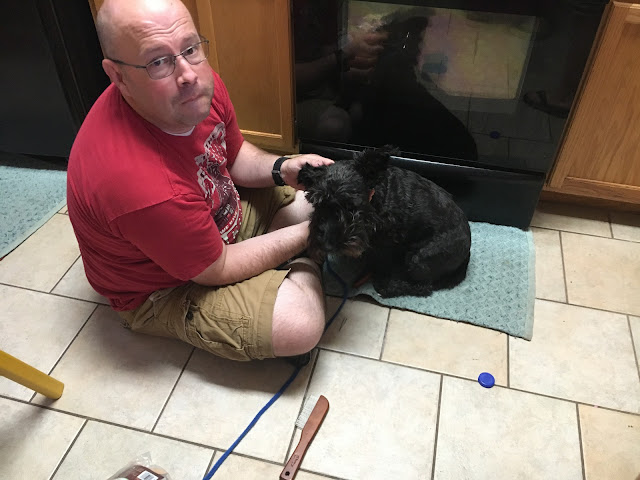 Our Labor Day was quite absent of labor. Instead we watched TV, read books, and laid about like lug-a-muffins. Evelyn wanted a picnic for lunch. The kids instantly took up that idea and made a kitty picnic with bowls of milk, goldfish crackers, fruit, etc. At 1 pm we suited up for some swimming at one of the local pools. Labor Day was the last open swim day of the season. Baffles me why they close pools around here when the temperature is consistently over 100. This pool had a fun splash pad and a surfing type pool (cost extra). The kids quite enjoyed their time swimming in the main pool. Josie and Evelyn were quite out of sorts that the baby pool closed for an hour due to a poop incident. Josie is not keen on floating about and letting me hold her. She wants to range about in shallow water, gratefully the splash pad kept her somewhat amused. That girl has learned to scream and screech like a banshee whenever she is crossed. Josie was absolutely sure one of the water spigots belonged to her. She screamed each time someone got even remotely close to her. The water felt so refreshing, the water was actually cool! After swimming we treated the kids to either a corn dog or a 1/2 price drink at Sonic. Phillip only wanted items were not willing to purchase. He was terribly upset and mad for a good hour or more. He cried the entire drive home and sat in time out until his angst passed. It's hard to make choices that like and deal with the consequences. I cut watermelon and cantaloupe while keeping an eye of Phillip. He was keen on hitting anyone who got too close. I wanted to put some lemon juice and sugar on the fruit but only had lemonade powder...I tried it out. Not too shabby in a bind! We had dinner and FHE over at Spenser's home. Laura made Mongolian Beef for dinner. Anna gave a cute lesson on sharing the gospel.

Tuesday morning I had another chiropractor visit with Dr Godard. He was surprised my hips and lower back were way out of alignment again. My hips are certainly sore and causing discomfort. The girls were quite unsure what to think of me getting an adjustment. Evelyn had her entire fist stuffed in her mouth. I worked on cleaning up the house a bit throughout the week, finally getting a chance to take some photos of the downstairs area. A gal in our ward referred me to someone who could cut my hair. We visited this business plaza with lots of little rooms each rented out by a sole hair dresser. We closeted ourselves in with Alana who cut off my hair. Josie decided to fill her diaper within the first few minutes. Evelyn had to use the bathroom 3 minutes after that, she would not use the potty because someone had an incense burner going, Evelyn was afraid of the smoke. Felt like being shut up in a poo closet getting my hair worked on. Feels much better! I need to go back because one side is noticeably shorter than the other.

I am loving all the thrift stores around my area. I needed a letter/paper holder so went looking at Goodwill. Totally lucked out in a letter holder and some darling dresses for the girls. One day I took a pile of outgrown Josie, Amelia, and Everett shoes to Once Upon a Child. I was quite let down they only took one outfit and one pair of shoes. The stuff I brought was in better condition than most of the shoes in their bins. Stinky, stink. Amelia presented her Student Council speech she prepared over the weekend. She and I worked on her 2 min speech using bulleted lists of ideas found online.  She was quite excited to deliver her speech! Amelia came home on cloud 9! From what she told me her speech was the longest in her class. After all the speeches the class voted for their favorites. Amelia and another girl were chosen to be the representatives. I certainly hope the position is manageable. Way to go sweet girl!

Phillip had his first Cub Scouts meeting at 5:00-6:30 pm on Tuesday. He wore a second-hand shirt we borrowed from someone in the ward. Phillip was all shades of excited and a bit worried about his first meeting. He came home raving about getting to eat a cookie and make slime. His leaders are awesome. Looks like I will be pulled back into Scouting again. Amelia had Activity Day Girls Wednesday at 4:30. Most extra curricular activities are not going to happen this year, things like sports and ballet and piano lessons. I will teach the kids myself piano if I can get my ducks in a row this coming week. Phillip read a long, boring story this week/month for school. The teachers are going by theme and not in order. The first story of the year was quite long (took me over 15 minutes to read out loud) and not very interesting. He got discouraged after the first two pages. We muddled through the story as best he could. He brought home a drawing assignment where he was asked what his watermelon seed turned into, with all his imaginative, boyish sarcasm he drew a two-headed pig with one leg. I laughed over and over all day each time I caught sight of his snarky drawing. What did you really think of that story? Ha ha ha ha!

Friday morning the little girls and I headed to Sonoma Ranch for Grandparent's Day, a day for grandparents to visit the school with their grandkids. Parents were also invited in the case no grandparents were available. We were treated to doughnuts and milk or juice for breakfast in the cafeteria. In the library we fought immense crowds to visit the book fair. Each kid got to pick one book, Phillip and Everett paid for their own books using birthday money. Then the kids got to see each other's classrooms! I spent some time finally meeting Phillip's speech teacher and getting her up to speed. Phillip's IEP never arrived from Sidney. After more time on the phone the records were set up to come on Monday. He came up upset one day because his teacher had him read in front of the class. He was so embarrassed! We are working each and everyday on his reading skills. It's hard to watch him struggle, he is smart, smarter than Amelia just not in the traditional ways.

Saturday was Phillip's big day. The day arrived for his baptism. He carefully got dressed, making sure to wear his white undies (even though the pair had a slight poo smear stain) and bring an extra pair. Three kids total were baptized that day. The stake had a small and short meeting beforehand. We were so glad the Chandler Calls and Arizona Grandma Shirley could come. Phillip offered some sweet prayers earlier in the week, one night he prayed for a good 5 minutes asking for all the animals to feel the spirit when he was baptized like the hamsters, dogs, and cats. That boy was beaming all day long. He flashed many a toothy smile! He had cousin Anson right by his side most of the service. Evelyn is quite impressed and now plans on getting baptized like Phillip. We gathered afterward in the RS room for another short talk and his confirmation. He was confirmed by Justin, Spenser, and Brother Waite. I made special sugar cookies for everyone to take home once the service was over. Aunt Shirley came over for lunch of fancy chicken nuggets and ketchup. Mmmmm. He did not sleep well Saturday night. He woke up and told me he flipped and flapped and flopped about all night, sitting up every few minutes. Why? He was excited to sit up front with the Bishopric in his new suit and "Future Missionary in Training" badge. Indeed, he beamed up there on the stand.

Josie is developing into a full-fledged toddler. Why are we so blessed with kids who have such strong personalities? For once, I'd sort of enjoy a toddler who did not scream or cry at the turn of a hat. In nursery all Josie does is cry and carry on when another child gets remotely close to her. Evelyn and Josie constantly fight now. Her ear-blasting screams might even challenge someone hard of hearing. She discovered the joy of coloring this week: on paper, on the floor, on her arms, on the furniture, etc. Sigh. Back to constant preaching over the glories of writing only on paper. She even played with her poo this week. I neglected to change her diaper for a few moments after she pooped. A while later she came toddling up to me delightedly chattering to show me her poo covered legs and arms. Speaking about poo...Justin spent a few nights this week fixing a leak on our toilet. Took a few trips to Home Depot for supplies and a wrench...but the toilet leak is much slower now. Thanks sweetie for fixing that.

We came home from church to find Vader's snout full of cactus spines. The side gate was left open so he went a wandering while we were gone. Guess he sniffed a cactus and got a piece of one stuck in his mouth and nose. I never want to pull out spines from his snout again. Poor dog was shaking and miserable as Justin held him still and I used tweezers to remove the smaller spines. We are grateful the cactus he got into was a larger one and not one of the fine-spined ones.