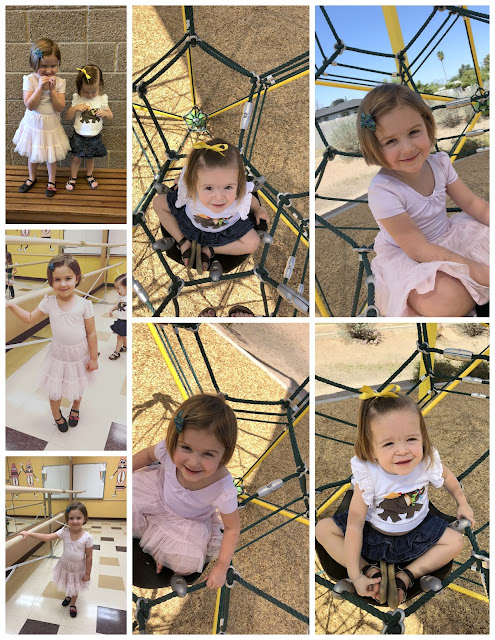 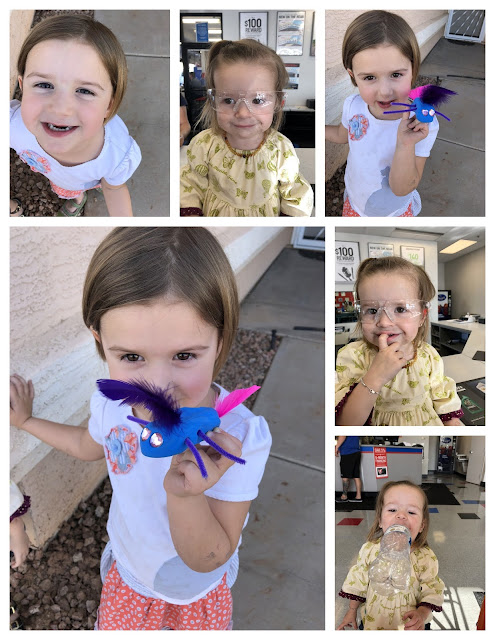 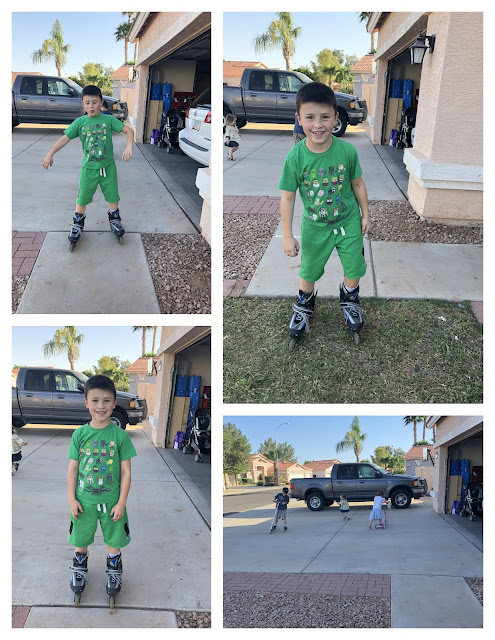 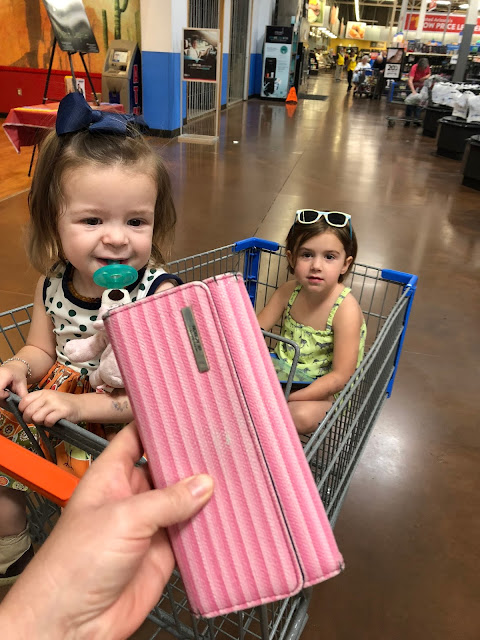 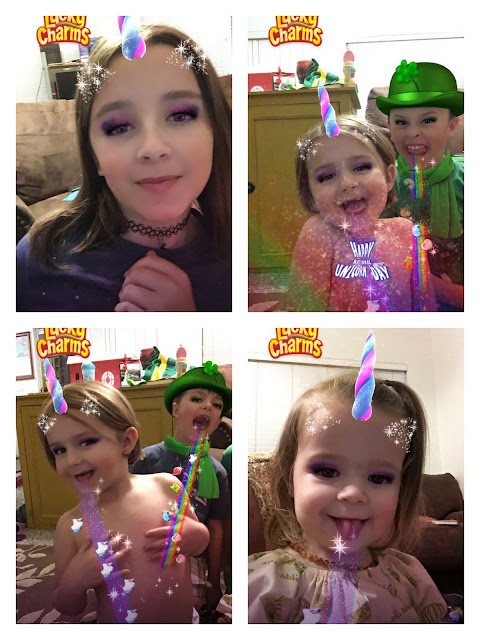 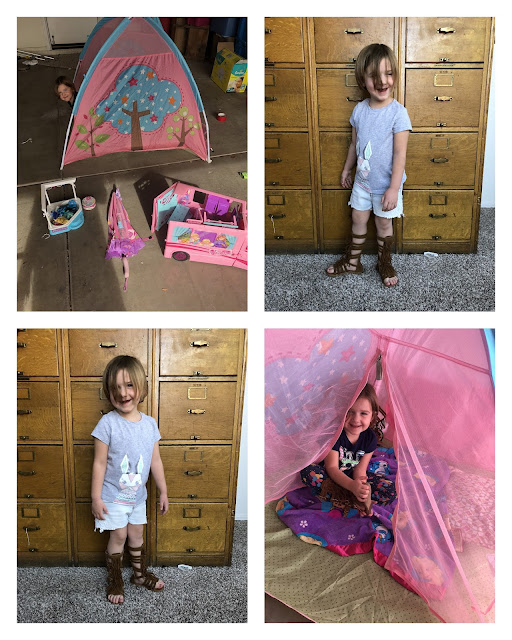 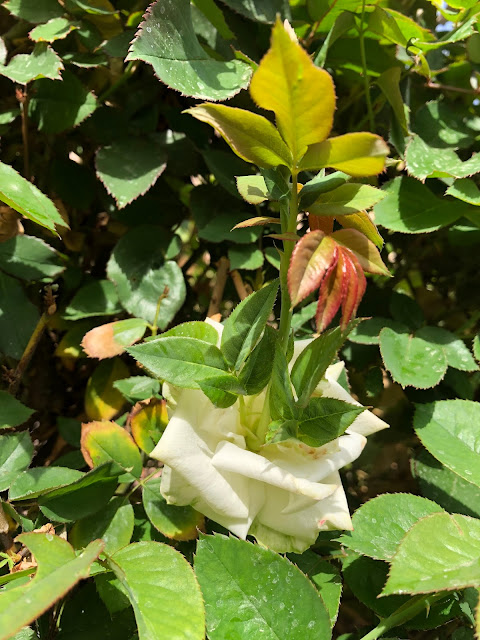 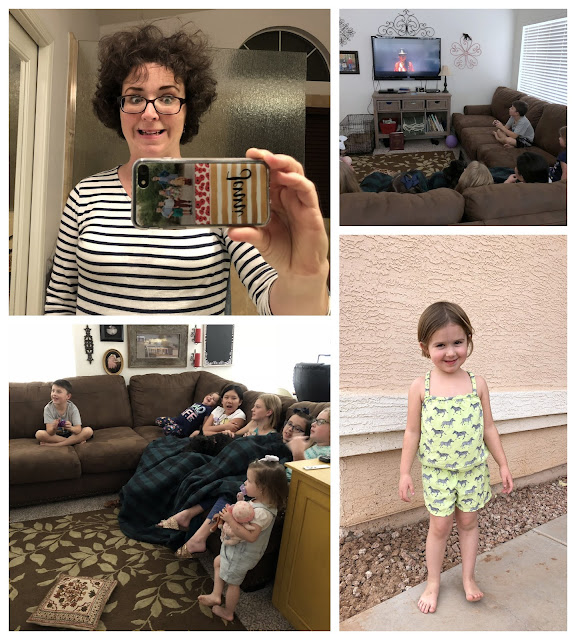 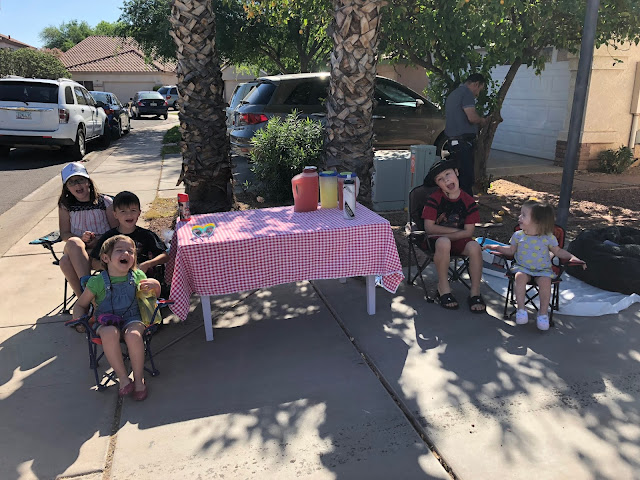 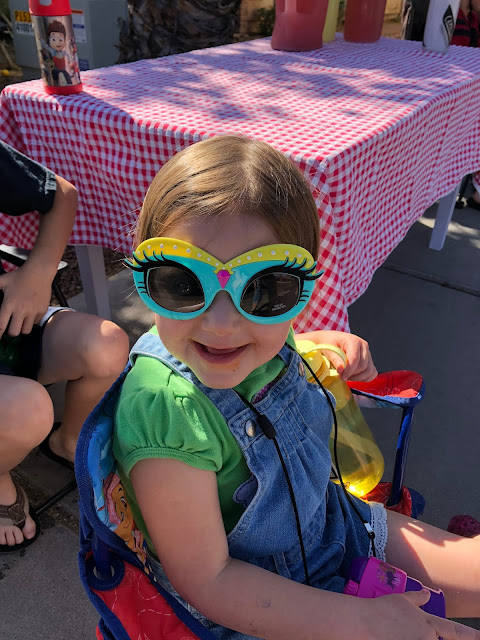 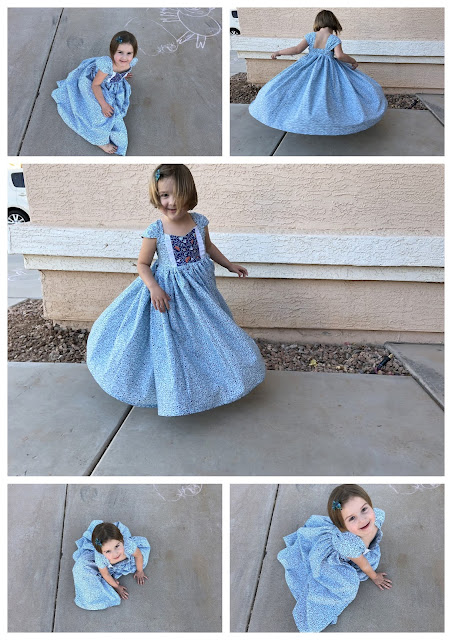 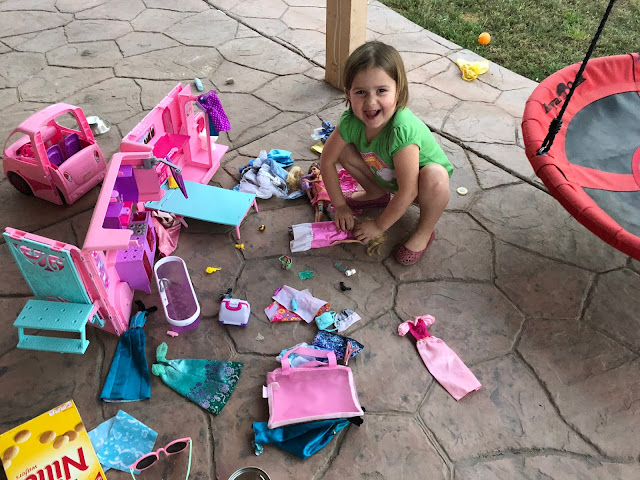 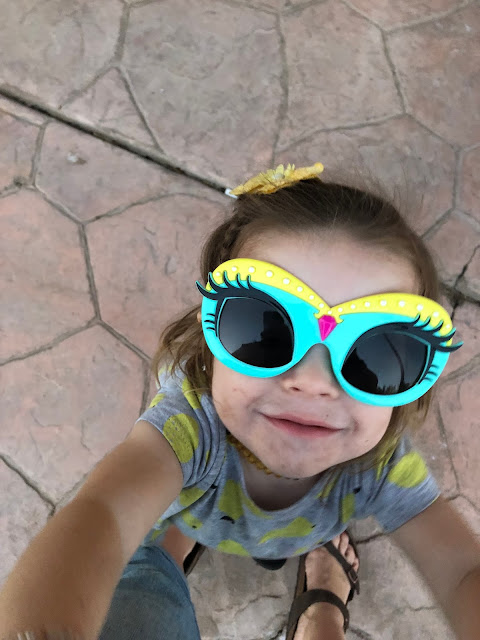 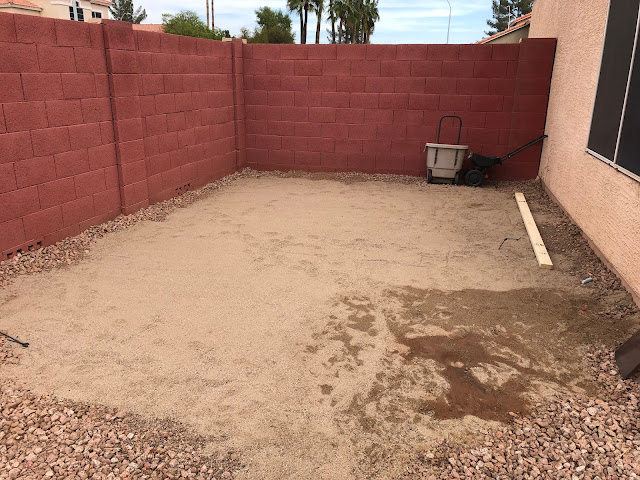 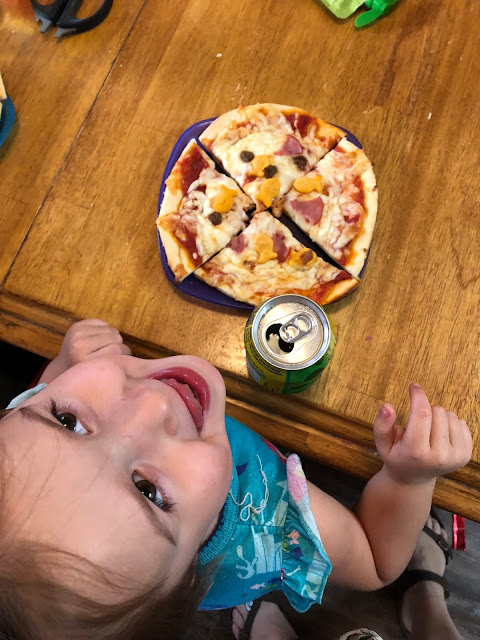 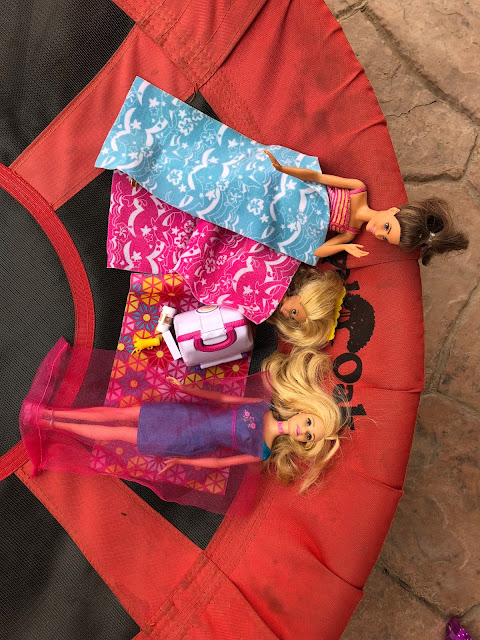 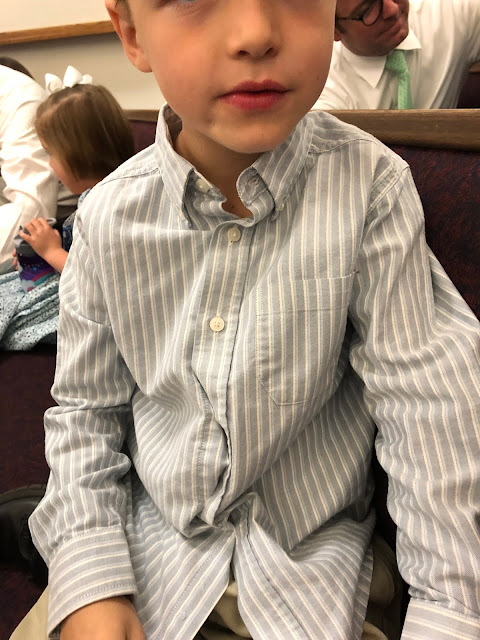 Evelyn started ballet/tap/gymnastics class this week through the city of Gilbert. We enjoyed going to the recreation center and playing. At the end of class the girls show off what they learned! I love how low-key it is! Evelyn gets to dance and wear tutus with other little girls. We stopped off at a cute park down the road after class for a bit. The girls pretended to be baby birds in the climbing web area. Evelyn watered some plants since there was nary a bathroom in sight. After preschool we took the van in for some tire maintenance. Last time I drove up to see Justin the van was shaking quite terribly. The rear passenger tire was coming apart and causing most of the issues, course the tire sensor was also broken, and the front alignment off because of the rear tire issues. At the same time I realized my wallet was nowhere in the van. Justin checked our accounts to make sure no one had my cards and such. Phew, no strange activity. We waited around for 90 minutes while the tire was fixed up. I'm happy that Mia can take charge at home, starting the boys on homework and fixing snacks.

Monday just happened to be National Unicorn Day (in Scotland). Mia needed no further excuse to wear unicorn themed clothing and act like a unicorn all day. Even Snapchat had fun unicorn filters for that occasion. FHE was a disaster this week. Some I was upset and stressed, Justin was upset at Mia for not listening, Mia was being stubborn and obstinate (gasp), and the little girls total divas. In fact, FHE this week was just about as bad for the same reasons. Justin and Amelia seem to go at it right before FHE starts, usually she will not (stop playing piano or take off her roller blades when asked) and Justin felt the need to sort it all out right there. She can be a pain.

Tuesday morning found us at Walmart searching for my errant wallet. Thankfully, it was in the office all safe and sound. We headed back to the tire shop for an oil change, the tire sensor repair and the alignment. After an hour the girls ran out of snacks and patience. After the second hour so did I! Phillip showed his true colors. I am telling you, this boy is so generous and kind. He always amazes me with gospel insight. I finished my first piano lesson for my newest student, Tillman. The boys went out front to play while we waited for his mom. Tillman wanted to ride bikes so Phillip let him use the treasured motorcycle bike. After a moment or two he asked Tillman if he had a bike. He said no. When time came for Tillman to leave Phillip and I asked Sister Webster if they wanted the bike. She asked how much, Phillip said, "He can just have it, I will feel happy knowing he has a bike and is using it!" After they left Phillip told me, "Mom, I feel so happy and good right now, I made a good choice!" Yes, yes that is right. He's saved his money for over 6 months now to buy his own Kindle Fire like Everett. This boy was blessed for his generosity. Saturday he found a practically new Kindle Fire for $5 at a garage sale. He was over the moon happy to still have $55 dollars and a Kindle. We can all learn to be a little more like Phillip. A kid who gave away at $50 bike just because it was the right thing to do.

I've been busy thrifting clothes for the kids summer outfits. I found a pair of darling gladiator sandals for Evelyn! Last week I found two nice pairs of roller-blades at Savers. Amelia and Phillip come home each day now and practice roller blading! So many memories for Justin and I of all the skating we did as kids and teens. Sunday we walked around the oval while Amelia and Phillip roller-bladed. Justin said it felt like baby birds leaving the nest! Phillip's herky-jerky moves made me smile. After some youtube videos and tips from Justin both kids are now learning railroad ties and pizza pie moves.

I wanted to torture myself further by cutting out and sewing three more sister dresses with some fabric I have hoarded in my stash. I lost my mojo. I resewed the bodice for Jojo because it was too small, the sleeves were torture, my ruffler was not working correctly, and my serger quit on me again. I pulled through and finished thanks to a seam ripper and the zig zag stitch. Now my station is put away until I catch the fire again. Evelyn had the best time playing in the garage, I set up her tent and she stuffed it with all kinds of goodies. Her Barbie dream camper went on a trip to Las Vegas and then camping in the tent.

The Greatest Showman came via mail on the 10th. Oh my gracious! So exciting. The kids got to watch it both Wednesday and Thursday after school. Phillip divulged after the movie that he did not mind the kissing parts at all...in fact, he rather liked those parts! Ha ha ha ha, he's got a romantic heart. Thursday Mia invited over Chloe (who was over for piano anyhow), Abby, and Averie to watch the movie with her. Fun times. Even Evelyn is taken with the movie, especially the bearded lady. We dance often to Million Dreams and other songs in the soundtrack.

We found an alien rose in our bush, a rose stem with a bud was growing out of the center of the rose!

Saturday morning the kids set up a lemonade stand at the Kim's garage sale! Sounds like they had more fun perusing the garage sale and spending their earnings on a bean bag and the above mentioned Kindle Fire. While they older kids sold lemonade Justin and I took the little girls down to South Gilbert to fetch some "free" sand. It was lots of hard work moving enough sand to build a two inch base for the above ground pool. We only ended up moving 6-7 wheel barrows of sand the first time. The second time Justin took just the boys plus a young man from our ward looking to earn money. They moved another 9-10 loads of sand! We are slowly working on grading the area and pulling out larger rocks. We were all a bit sore the next day. I worked on cleaning the garage again and closing up my sewing shop.

Singing time was interesting this week. Instead of my planned 20 minutes this week I was given close to 40 minutes. I'll just say it was a bit sketchy at times with junior Primary. The senior primary seemed to enjoy singing favorite songs...from the hymn book! I love that they chose Star Spangled Banner and other favorites. The girls looked so gorgeous in their new dresses! They even let me take some nice photos of them just because. Well, Evelyn was a bit touch and go, but we managed.

Evelyn has almost half her sticker chart filled out. She is a booger. She wakes up so early and pesters Amelia and even the boys until we all make her cry. Several times she got up in the wee-hours and refused to go back to bed unless I was with her. Still, she is proud of herself for "sleeping" in her own bed. Little battles win the big war right? Maybe I'll move her bed into the food storage closet and call her Harriet Potter.