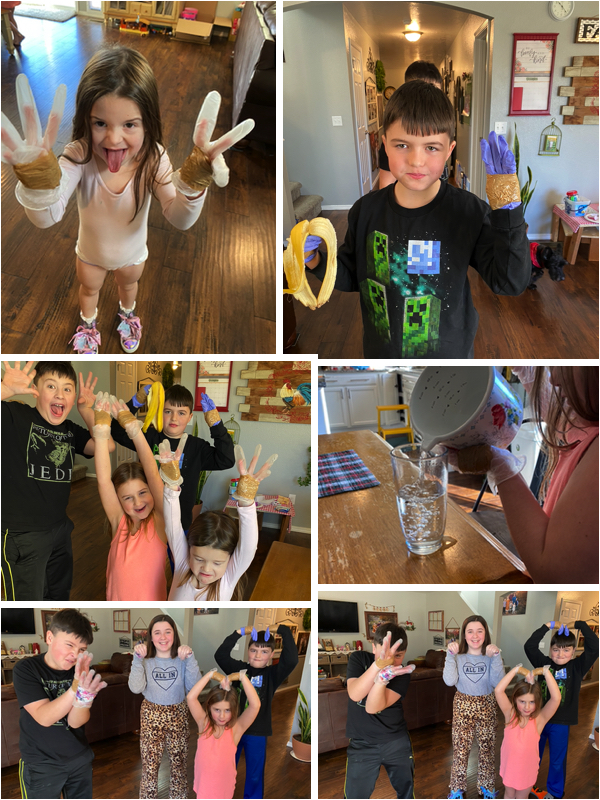 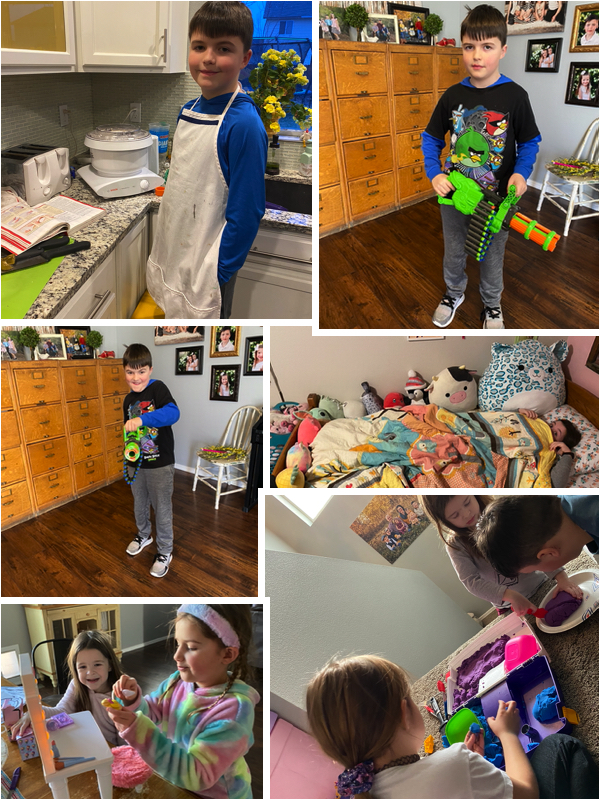 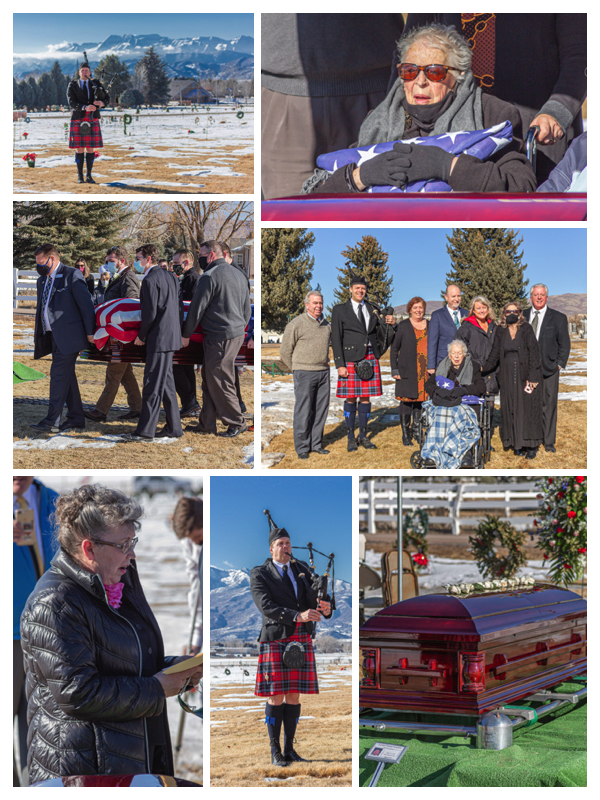 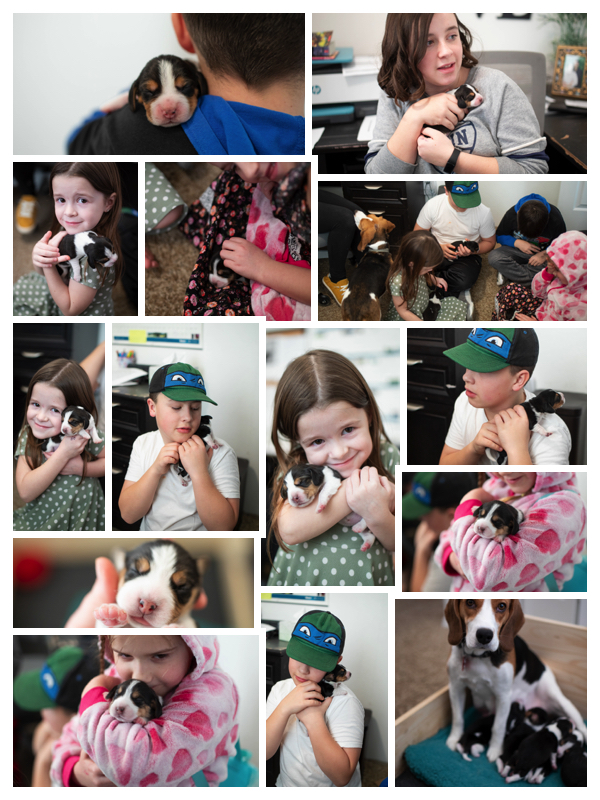 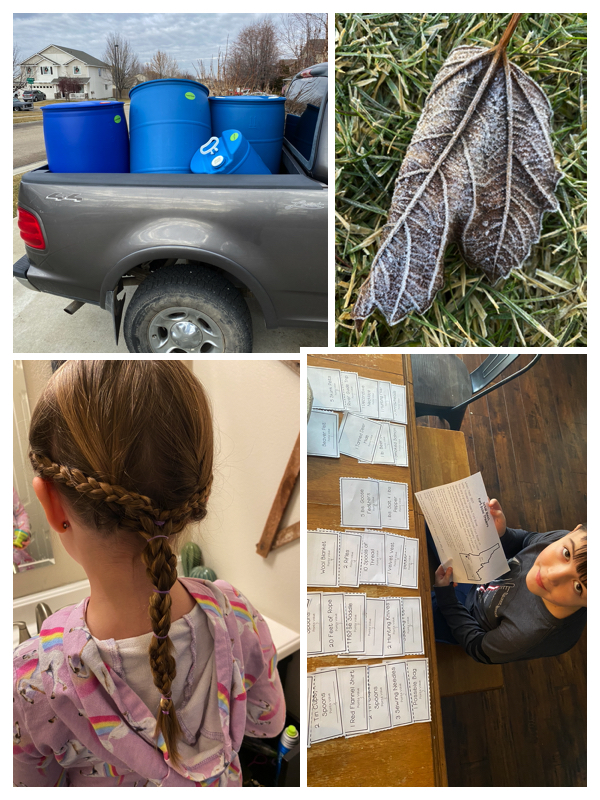 I am trying to figure out how to attach photos to my blog now that I have a new computer. Change can be hard to deal with after years of doing my blog a certain way! In the end my new computer does not support the rather easy photo program I used for blogging. Maybe it's time for a change. One answer could be to just skip the blog and make my family books. I don't know. I missed last week so remembering that will be a challenge!

School is going. It was hard to get back into the saddle after Christmas break. We managed with a light first week back of school work. We will have state testing come March this year, the kids can practice the tests until end of February. I signed up Phillip and Everett for the ELA test. Everett finished his test in about 30 minutes. Phillip whined for an hour, would not even try to read the first sentence of the test. That was particularly frustrating. I then switched his assignment to work on a 5 question math quiz. Same behavior. He missed lunch and was facing a weekend of boredom over a stupid quiz. He gives up before even trying. After he actually looked at the quiz and read the questions, he realized it was super easy and finished in 5 minutes. I am concerned he will refuse to take the state tests! This week I contacted the student success team to revise his 504 plan before the deadline in January. I am hoping we can get some extra accommodations especially for testing (extra time, text to voice, multiplication tables, etc). Phillip has got to face the fact that sometimes learning and work include repetition and doing things that fall outside of "fun." These situations are stressful for us all because his behavior (and my responding behavior) affect our home aura. I wish he could test in a facility, but COVID...but COVID. Everett had a fun science experiment testing how useful our thumbs are. The experiment had him wear gloves then tape down his thumbs and try to open bananas, twist jar lids, pour pitchers, pick up marbles, etc. It looked so fun the other kids soon lost their thumbs! They raced around on the hoverboards acting like raptors. Everett is also learning about the fur trade in Idaho. He and I played a fun Trader and Indian game, we each had cards with trade items rated on a point system. I won, my barter skills are superb. I was "Ninja Mother" the Nez Perce Indian. Everett was Everett the Fur Trader. After Christmas break I expected Evelyn's reading skills to be much worse. She stepped up to the plate and is reading like a champ. We even started reading a chapter book together. I guess when your front teeth come in your reading skills improve?! Ha ha. Amelia experienced some headaches this week with lots of tests at the end of first semester. She got through her tests without much of a problem. This week she had to create a portfolio showing what was learned and answer a bunch of questions about each course. That was fine just time consuming. Things got dicey on Wednesday when she found out that part of her math grade was based on taking math tests in CTC Math. She did all the course work but had to go back and take a certain test (not the ones she took during the semester of course). We stressed over taking 12 math tests in a day. She did really, really well until the linear equations. Those had me stumped as well. I understood the mechanics but the answers were not matching up. Dusty came over and clarified the problems in less that 5 minutes after we stressed over the equations for an hour. Felt good to submit that test. Bam.

Everett decided he wanted to make bread. I was not in the mood to assist him. He was not taking no for an answer...he basically made bread all by himself. The bread was super tasty! Way to be assertive, Everett. Everett and Phillip are learning to play a new game called "Here to Slay." The game is a bit complicated. I have a hard time keeping the rules and following the gist of the game. So we fight. The game is best played with fighting gloves on and shouting. Phillip made the game extra fun this week, he learned how to make guardian cards online! He made me a power card that said, "if you lose, you sever mom for a hole week." Ummmm, that sounds uncomfortable. I helped him spell the words correctly. Guess I get slaves when I win.

My Grandpa Lynn's funeral was on Saturday the 9th of January in Heber, UT. We joined via Zoom to watch the proceedings. My mom carried dad around on her phone via zoom! He was far away in Saudi Arabia. My dad even delivered the Eulogy via zoom to those present in Heber and remotely. Oddly, we could hear Dad the best. It was very difficult to hear Laura and Scott. The best part was the graveside service. Johnny Miner, Grandpa's great-nephew, played the bag pipes. Grandpa was laid to rest with a lovely military tribute, flag folding, gun salute, and taps. James, Seth, and Jacob all served as pall bearers. My mom sang a lovely Welch lullaby. I felt my heart stir knowing we would meet again with perfect health and as an eternal family. I've included Lynn's obituary:

Lynn Terry Lance was born April 23, 1932, a resident of Gilroy, CA, passed on December 28, 2020. Lynn was born in Salt Lake City, Utah son of Lynn Eldore and Hilda Terry Lance, he met and married Amelia Jean Crook from Fallon, Nevada. After graduating from the University of Utah, he was inducted into the US Army during the Korean War. He served in Verdun, France and Fort Ord, CA. While at Fort Ord they became familiar with the Gilroy area. In 1956, the young couple moved to Gilroy with their two young boys to begin his 32 year career as a teacher for Gilroy Unified School District. He taught thousands of students in Gilroy. He was always interested in how they were doing and never stopped caring about them. Lynn was president of the Gilroy Teachers Association and participated in many school activities over the years. He also served as Bishop of the Gilroy Ward of the Church of Jesus Christ of Latter-Day Saints and helped build the chapel on the corner of Miller and First Street.He is survived by his wife of 67 years. Jean and children Lane (Debra) Lance, Scott Lance, Laura (Matt) Pettit, Jonathan (Jan) Lance, Carol Wilson, Shawn (Sandi) Lance, and Sally (Jeff) Herbert. He is also survived by 27 grandchildren and more than 50 great grandchildren.

Last weekend felt quite stressful. I had a moment to un-decorate Christmas, the mess is terrific! I do enjoy the challenge of redecorating the walls. I made a couple small changes to our walls, even set up a seasonal table to Evelyn's delight. I went thrifting on Saturday to shed some stress and find Valentine's decorations for my table. Justin and the boys stepped up before dinner and put all the boxes away. We then cleaned up the main level. Everything looked fabulous all cleaned up. I finally found the calendar I purchased in November...I put it away so it would not get bent. It was in the closet I searched about 6 times...only hung up between several winter coats. Gah! Amelia spent the afternoon with Jocelyn for her birthday.

Phillip had a stellar Sunday! He was set apart and sustained in sacrament meeting as a new Deacon. He received the Aaronic priesthood right after second (half) hour. We've got a squeakin' Deacon. This Sunday he passed the sacrament for the first time and did a wonderful job. I had to update his wardrobe with a new white shirt, shoes, ties, and a belt. He keeps growing! Justin and I delivered a stellar lecture last week after the testing fiasco about doing hard things. Grandpa Lane would approve. It was ward conference last week. We unexpectedly got a new Bishop. We are praying for the retired Bishop and our new Bishop. The Palmers let us come over and snuggle Tilly's 6 new puppies. The puppies are so, so cute. Almost makes me want a puppy, except I don't want one. Just to snuggle. Phillip also achieved a personal record by making it 7 days without a shower. He was an oily, smelly mess. Gross boys.

Most of the kids spent some Christmas money this week. Everett found a Gatling nerf gun; so many darts, so many games this week. He can be found shooting inanimate objects of all sizes and kinds. Evelyn finally spotted a doll-sized vanity she's wanted since her birthday. Josie got two figurines of Jojo Swia. I found the dolls buried in kinetic sand the next day. Amelia convinced me to take her to Costco in search of an XXL squishmallow. She scored a cute cheetah now named Chai, Chai Bubble T. The teen is happy. The teen now wants a bar on her bed so can make a bed nest with all her animals. Phillip still has his $20.

Our country is going cuckoo. President Trump spoke in a rally near the Capitol Building. Soon after the building was "raided" in an effort to change the electoral college votes going on. Now Trump is being impeached only weeks before Inauguration Day. Essentially, Trump is being hailed a terrorist for inciting a riot; Biden is taking over (triple yikes), and patriotism is hailed only if you agree with those in power. In my mind we are at the point where Laconeous and his people retreat into their city and endure a 7 year famine of food and war against the Gadianton robbers. If you express your opinion be ready for folks to crucify you digitally. So instead we are quietly making sure our water storage is up to par, went from 70 gallons of water to 420 in just two days. I bought some used food grade barrels from a local store. Two of the barrels smell like almond extract, that water could be used for bathing. The vinegar smelling barrels are for sanitation and bum washing. The new barrels are for drinking water. My dad said his barrels smell like diet coke....he won the lottery. Hold on kids! The ride will get even more bumpy and strange.

Yesterday I was able to photograph a baby girl. Her mom found me through her friend whose baby I photographed 6 weeks ago. This baby was gorgeous with curly blonde hair. Sara helped me with a Home Depot trip to buy two new "fake" floors using sheets of paneling. The sheets are so much easier than the loose wood I have. Now to figure out how to edit and use my computer for photos. I'm feeling a little overwhelmed. Justin and I went to Cabela's in search of stuff to buy with his store points for our preparedness. We walked out with life jackets, a wound care kit, pepper spray, and an emergency blanket. You never know when you might need to kayak to Zion.

Well, I'm off to snuggle the cutest baby koala. Her name is Josie. She is darling and loves to snuggle. This koala doesn't eat leaves...she eats marshmallows and chips ahoy.