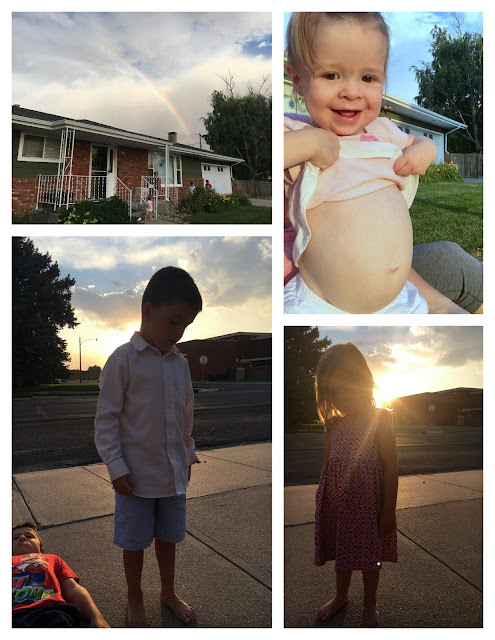 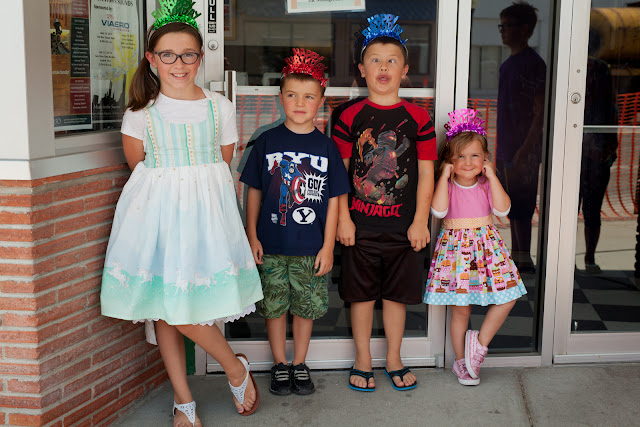 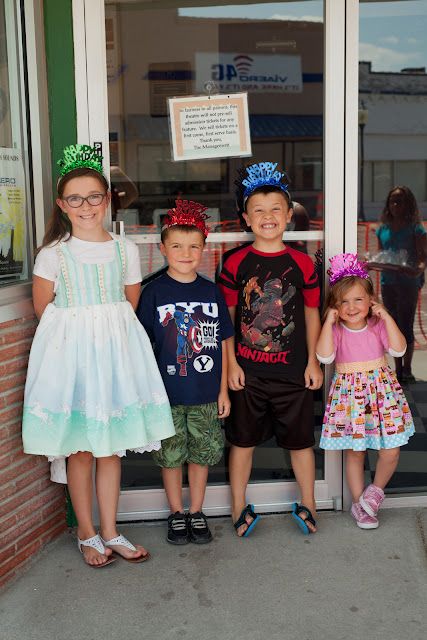 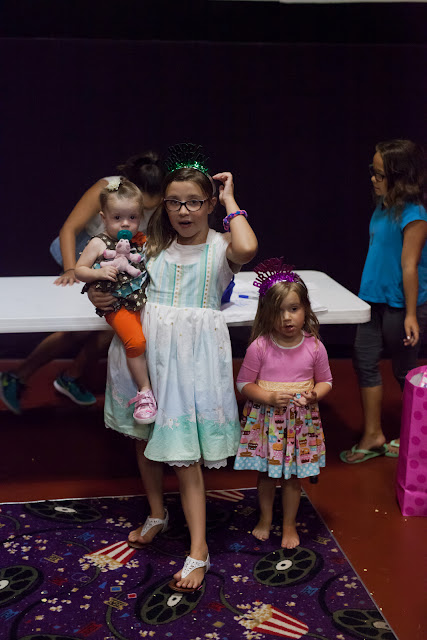 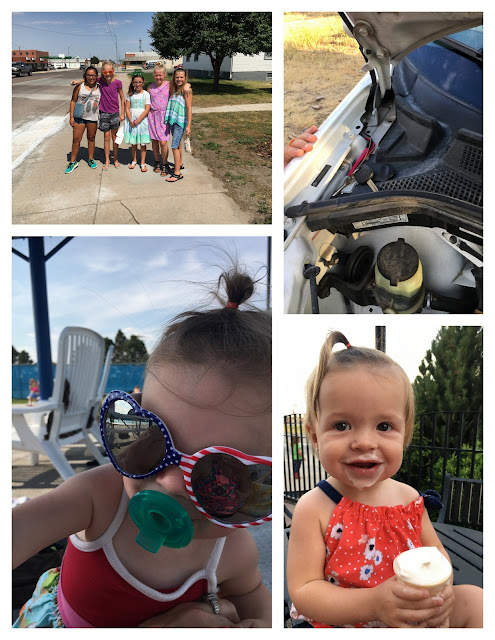 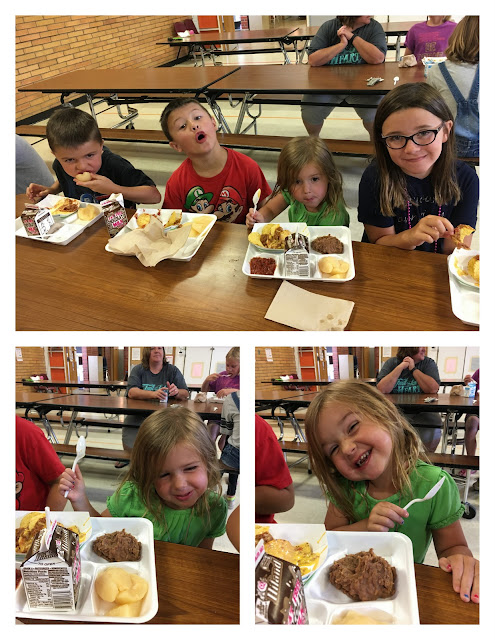 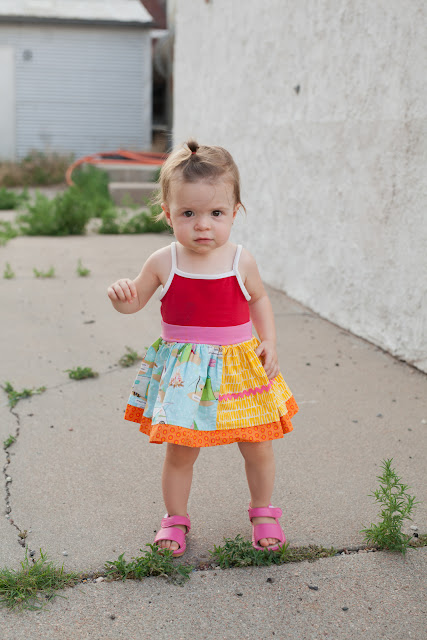 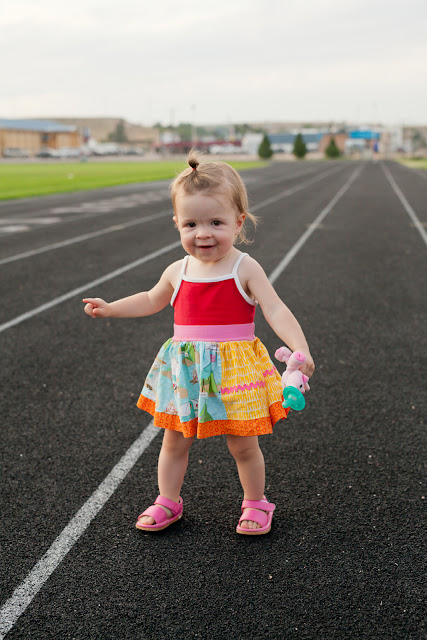 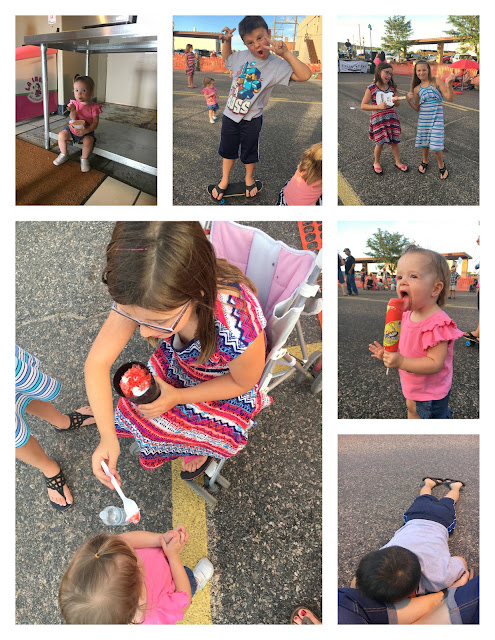 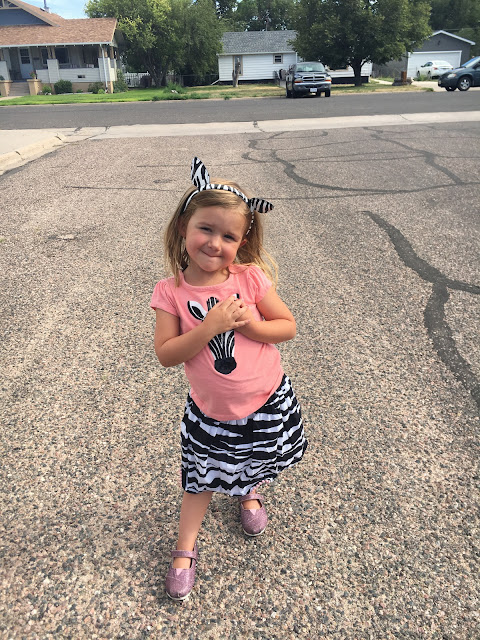 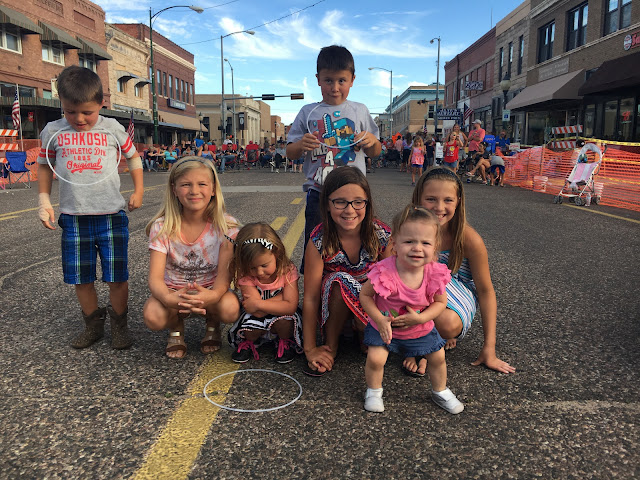 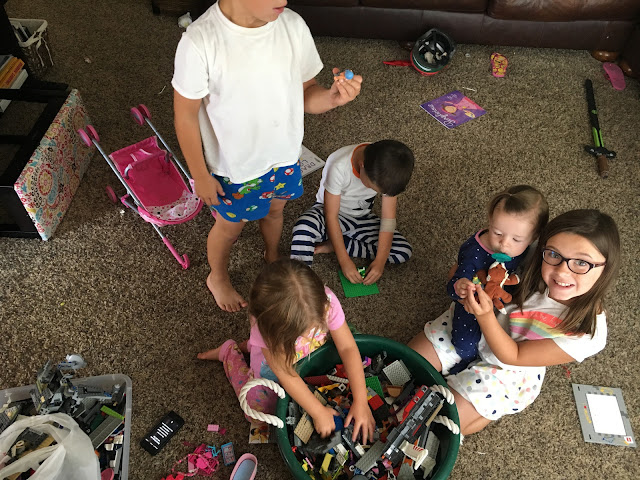 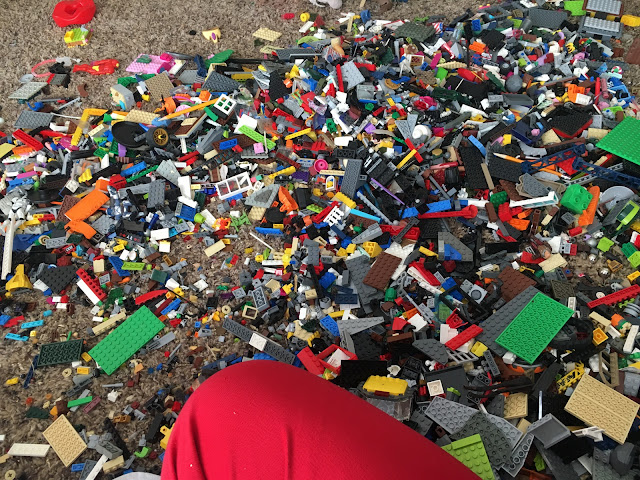 The kids woke up excited on Monday. The time finally arrived to celebrate birthdays...party style. This year instead of individual parties for the kids I rented the movie theater and let the kids invite their closest friends. The theater had a table at the front of the theater for gifts and treats. We had about 25 kids show up plus a smattering of siblings and parents. Each kid got a box of popcorn, soda, and a small candy. We watched Lego Batman! To rent the theater here all I have to do is pay the rental fee of $100 and bring any DVD disc (excluding Disney) to play! It was capital! Phillip and his friends claimed the front rows of the theater. Everett and his crew claimed the middle left, Amelia the middle top left, and Evelyn switched seats about 20 times. The babies and littles had a great time running up and down the center aisle. I made no bake cookies in lieu of cake and ice cream. Best party ever! No clean up (for me anyhow), kids contained, kids entertained, and manageable cost. Amelia and her cronies walked home in the 100 degree afternoon heat. We have 7 pre-teens running around until after 5 pm. Phillip and Everett played with their new toys. Everett scored the best toy, a remote control car with a cool roof wheel for extreme wheelies. Evelyn got two Rapunzel dolls, she was in heaven. A storm rolled through and cleared out the hot air around dinner.

Last week I finished all the sessions on my plate, just delivery and some payments left. This week I photographed a pair of 2018 HS Senior twins, and 3 other families. Should be close to finished with all the sessions. Gotta earn myself enough cash to get a fridge. Ha ha ha ha. Seems like there are another 2-3 sessions left to get done before we move away. The kids are quite patient as I work in the evenings to capture sessions and when I edit a bit in the afternoons. Mostly, I try to arrange for the kids to swim while Josie naps and I work. Twice this week the kids went with me to sessions since the sessions were short. The kids chose to walk across the street to play at the park. Wednesday was just perfect. Thursday was not so great. They wanted bikes this time. I loaded up the truck, Amelia's rear tire was flat, Phillip's chain popped off, and Everett wanted his scooter. He learned the hard way that scooters, gravel, and steep hills aren't a good combination. He crashed and found me in the middle of a session his elbow and hands covered in blood. I did not have anything to treat him since the van was at home. Evelyn had a poopsident to end the excursion.

The stress of this week seemed almost overwhelming. Last week the house saga ended with a positive house inspection. This week started out with a low house appraisal, causing us to renegotiate the contract once again. The owners went down to the appraisal price but then refused to cover any closing costs. That put us in a strain with Mia's surgery bill arriving (finally) and worries over selling our Nebraska home. Negotiations steamed up when the house owners asked for $5G in cash, non-refundable, earnest money. Somehow we settled with only paying $2G and a couple loopholes in case something happens before the loan closes. We were so stressed out I went back to the drawing board and started to look for houses again. Justin was pretty intense and wishing Nebraska and Arizona were not so far apart. The kids felt our stress and went silent when I was talking things over with Justin or our agent. That is a miracle. Amelia riled up the boys and Evelyn to make me cute cards for a breakfast in bed tray on Friday morning. That girl can make the best ham and cheese scrambled eggs. Maybe I should expand her repertoire. Looks like things are back on track for a closing the first part of August. We might be sleeping in an empty house until our stuff arrives if the shipment and closing don't match up. Quite honestly, that sounds like a bit of fun to me.

We are enjoying school lunch when the menu looks enticing. I finally tasted Amelia's favorite goulash. I never make it right. After tasting it I realized all it was was prego, ground beef, and soggy elbow noodles. Shopping with all the kids still feels like a party. I really want a cart with flashing lights, disco music, and confetti cannons to round out the effect. Seems like management won't go for that. Instead the kids whined about shopping, filling the cart with junk food, and complaining about my cooking skills. I might just go on strike until those boogers appreciate my lame efforts. I admit, since Justin left we are eating kid meals more. It's not like they really eat food anyway. I spend money to buy healthy food that just rots in the fruit baskets. Eh, that's not entirely true, the kids do love fruit and carrots.

Everett lost another bottom tooth! He was eating a rice krispy treat when one of the rice kernels popped his tooth out. He put it in a baggy and promptly lost the bag. Maybe the tooth fairy will take mercy and pay him for that missing tooth. We finally went to the library for the second time this summer. Hurts my heart to admit that. Amelia got sucked into a book right off the bat. Evelyn and Josie helped empty the numerous board games into a large pile on the floor. Ah yes, that is the reason why I stay far away from our library. They keep 1000 piece puzzles and board games in reach of toddler arms and hands. Phillip checked out 20 books on dinosaurs. Everett was content to check out Dinosaurs Love Tacos 2. It was a good read, fast too. I whipped out the weed killer and zapped all the nasty weeds growing in the rocks encircling our front yards. Since I was killing things I also weeded my raised garden beds. The petunia pots Justin dumped out a few months ago spread seeds in the garden. They look pretty so the flowers stayed. I also cultivated the tomato plants that grew from last year's cast off tomatoes. Yay! Free tomatoes this year.

Amelia got to play with Katelyn all Friday afternoon. The rest of us did a little garage sale shopping. I lost $40 out of my pocket at the last house. Thankfully, I'm friends with the lady who lives there. She eventually found both $20 bills, phew. Evelyn immediately changed into a zebra outfit with zebra ear headband after finding the outfit at one garage sale. She paired the outfit with soccer cleats a couple sizes too big. We grabbed some burritos then went downtown to enjoy an evening outside. Each Friday local bands can come perform at the Sidney Downtown Sounds. Vendors sell beer for those over 21. We left those folks near the watering hole. Instead we made our way near the stage where all the families and kids were congregated. Yah know, the ice cream truck side of the concert. Josie was making us all laugh with her dance moves. She actually has phenomenal rhythm and can keep the beat correctly. At one point she had a push-pop in one hand and a glow stick in the other. She danced so hard the treat zoomed out of it's tube and on the ground. She ate it off the pavement until I could save it. Evelyn was in her own little world performing random arabesques and ballet arms interspersed with head banging. Everett made a huge glowstick circle ring, he played catch with the object along with many other boys. He was quite content to score a paper guitar, made his stellar dance moves even more amazing. Amelia and Katelyn stuck together like glue, giggling over silly things the other girl noticed. Phillip scored a tiny skateboard, like the size fits Josie, he tried to skate and dance on it much to my amusement. Fresh air, loud 80s music, and friends! Sounds like a perfect win to me.

Saturday morning I scored a huge bin of random Lego blocks, like it's huge. For the price of three brand new lego baseplates I scored 17 large baseplates plus thousands more in Lego pieces. Took the kids and I all afternoon and into Sunday afternoon to sort through the mess and organize the lot. The most random item we found stashed in the tote was a real hermit crab claw. The tote must've been a collecting spot for lost of left over toys and parts. Threw away two Walmart bags of random doll parts, cheap chinese prize toys, and trash. It was totally worth it! The boys are so excited about their new collection. The lady how sold us the lot was there when the boys discovered it on the porch. Their exclamations of joy and surprise totally made her day! She went home and told her boys about my boy's reaction. I organized a cleaning sweep, from one side of the house to the other. We had everything picked up until Phillip dumped the Lego tote onto the carpet. All that work?! I went to celebrate Rachel Godard's new coming baby with other ladies at Applebys...ALONE. Yes, alone. It was magical. My eyes were so tired I nearly slept on the table and on my order of buffalo wings. Single momming it is not for the faint of heart. Props to my mom for all the years of raising 8 kids on her own while my Dad was roaming the world.