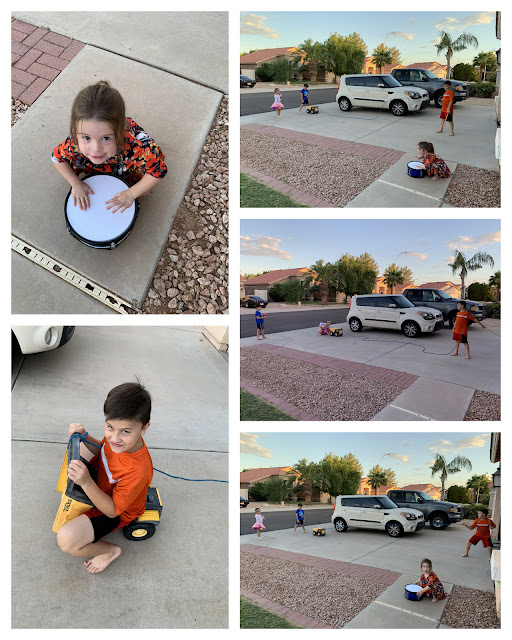 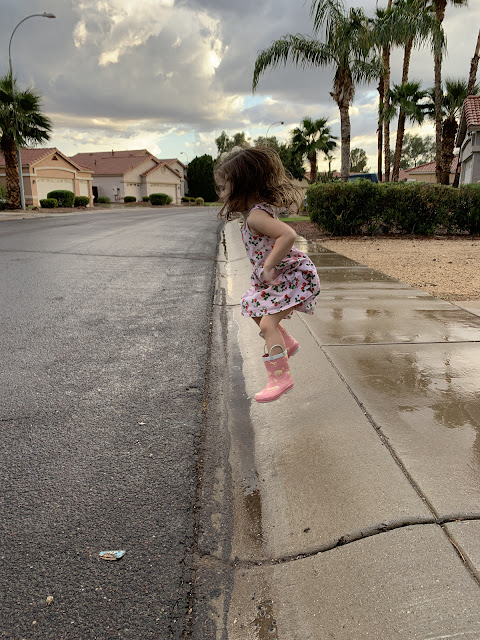 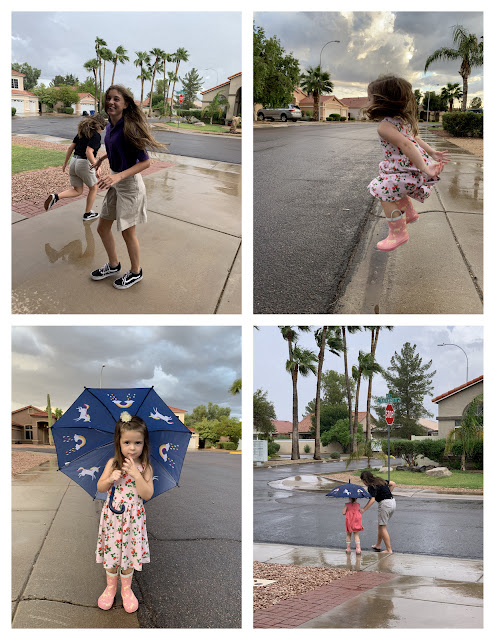 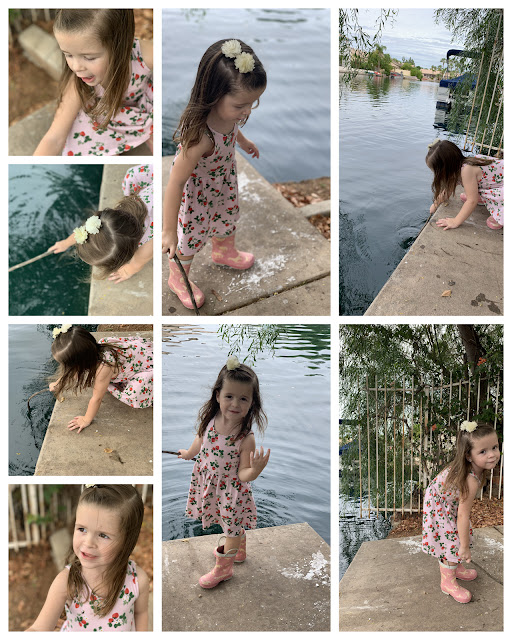 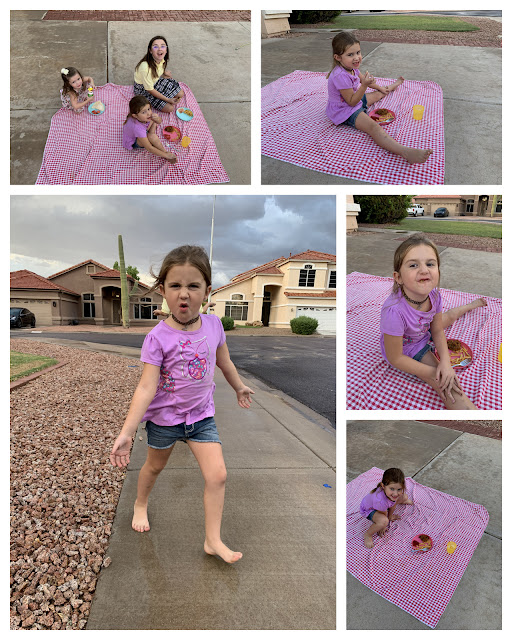 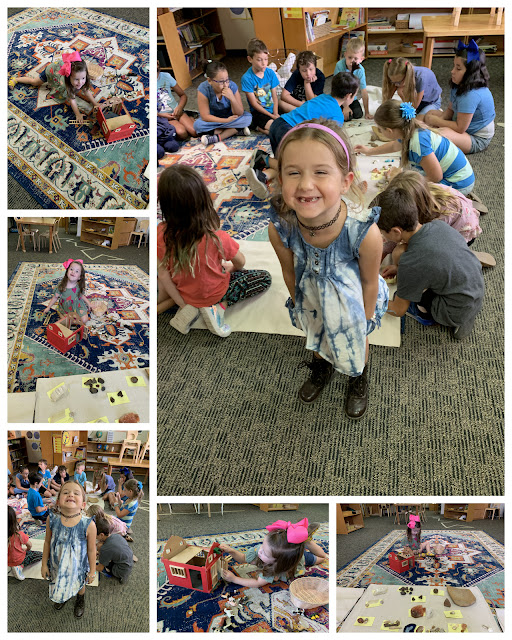 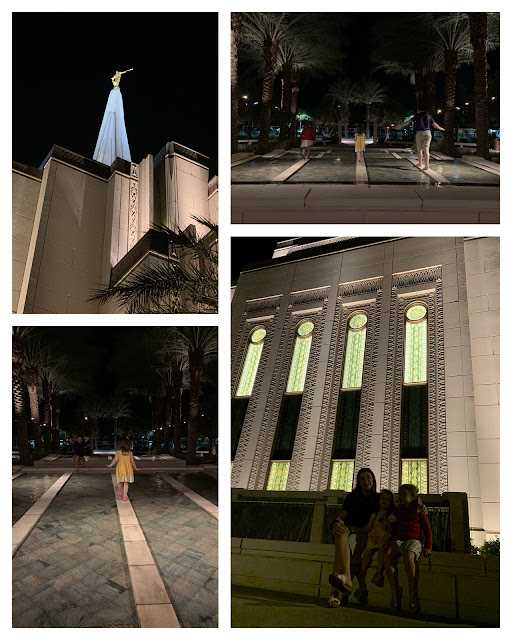 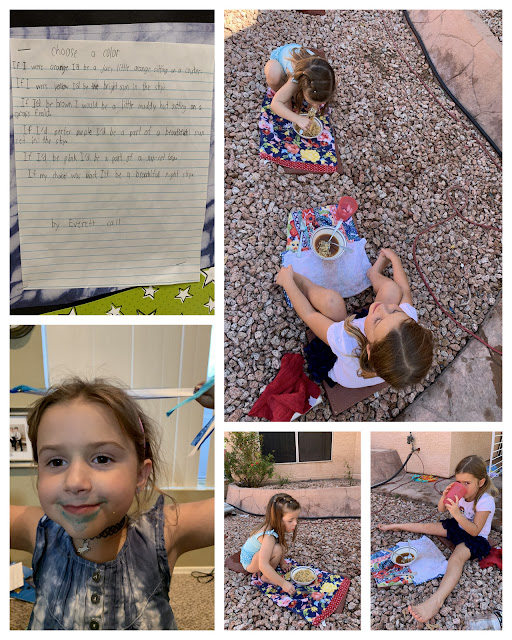 Phoenix caught the tail of some tropical storms in the gulf and southern California on Tuesday and Wednesday. Amelia woke up on September 25th to find the streets flooded and rain sheeting down! She went out for a morning frolic before getting dressed for the day! We had sporadic rain the remainder of the day. We heard about severe flooding in other parts of the city, as well as other parts hit harder with rain. The kids were thrilled to play in the flooded gutters until the rain stopped. All day we passed by parks flooded with a couple feet of rain! Times like that I wish we had a fun inflatable canoe to play with. Josie crooned over her pink pony rain boots, she wore them the rest of that week! Everett took a spin around the neighborhood on his bike spraying water every which way.

Phillip and Evelyn finally had their well-child visits a month post birthday. Phillip weighs 84 lbs, 80.2 percentile, measured 54 inches (39.1%) on the 23rd of September. Evelyn weighed 47 lbs (61.2%) and measured 42.5 inches (7.2 %). Both are meeting all their benchmarks and appear completely healthy! I asked for a refill of Phillip's dyanavel medication, Dr Auxier is away serving a mission, maybe retired for good. The new pediatrician revealed that the price for that medication had skyrocketed, indeed at the pharmacy it was $60 compared to $20 I paid a couple months ago. Some folks are paying up towards $300/mth. He suggested we try Adderal instead, it comes in capsule form and has the extended release. The price tag of $5 was hard to resist. We decided to try the new stuff and monitor his sleep and loss of appetite. Evelyn hid under my chair most of the visit. She was scared of a shot. I ended up having the kids get a flu shot, phew, the crying was terrible. Phillip handled it like a champ, the girls, that was not fun.

Thursday was a crazy, crazy day for me. Right after student drop off at the MEC (Montessori) I parked the van and went in to Evelyn's classroom. Evelyn sweet talked her teacher into having me come in with my rock collection. The kids went outside for a school photo while I set out and arranged the rocks on little placemats. I had a lovely time showing off my grain grinder rock, my geodes, and valuable (memorable) rocks. Josie found a barn and animals that kept her occupied! So my fun questions from all the students. Right after that I raced home to fold laundry before the boys got home at noon. It was parent-teacher conference so the boys had half days. Right after lunch and putting Josie down I went to visit with Mrs Sanders and Ms Nyugen. Sanders had Phillip last year, she made the comment that two brothers could not be more different! Phillip was calmer and plodded his way through his work, Everett is more emotional and get stressed out, needs more guidance. So true! Both boys earned good marks, the elementary schools don't use grades anymore, just the number system like the lower grades use. Everett comes with the best writing ideas and makes us all laugh with his stories. Ms Nyugen said Phillip is a delight, so friendly to everyone. He gets the best ideas for his writing projects as well. Good job BOYS!!!! Raced home to teach piano, make dinner, and clean up a bit. At 7 some ladies met at a French cafe to celebrate Kristin's new baby boy on the way! I quite enjoyed a spot of friend time.

Mia needed some candy for a science project starting on Monday. We headed to Winco's candy bins to stock up on colored taffy. Mia's group had to make an example of plate tectonics. Stinkers, they chose the most expensive medium, why not salt dough. Josie saw the glowing lights of the temple, started singing "I love to see the Temple!" Why the heck not?! We drove to the temple and walked around the grounds. The little girls were thrilled with the experience.

Justin had a motorcycle skills class early on Saturday. He learned techniques to hone his city driving skills. He hoped for a better discount on insurance than the 3% that class earned him. Maybe, maybe? He will start motorcycling to work. I cleaned out and straightened up the garage. Ronald came over to play Minecraft with Amelia. The boys and Evelyn were at the church to practice for their Primary Program.