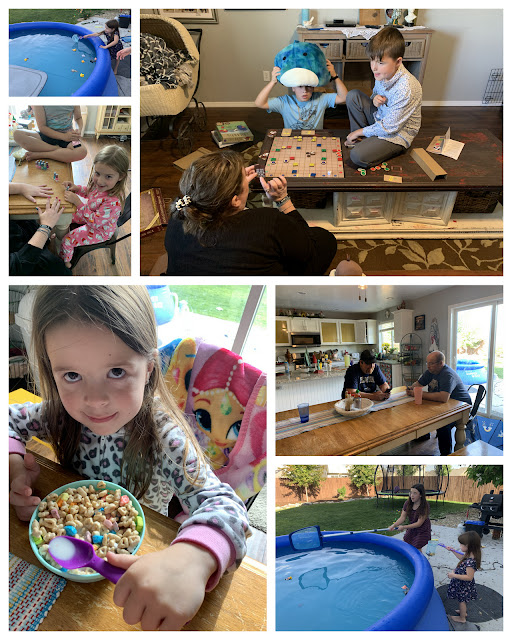 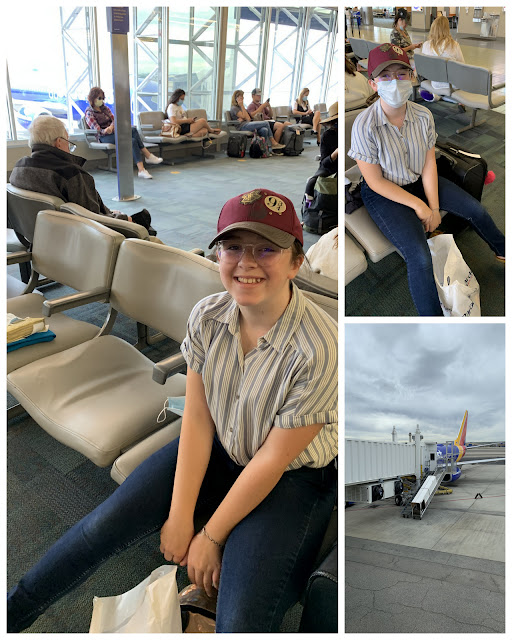 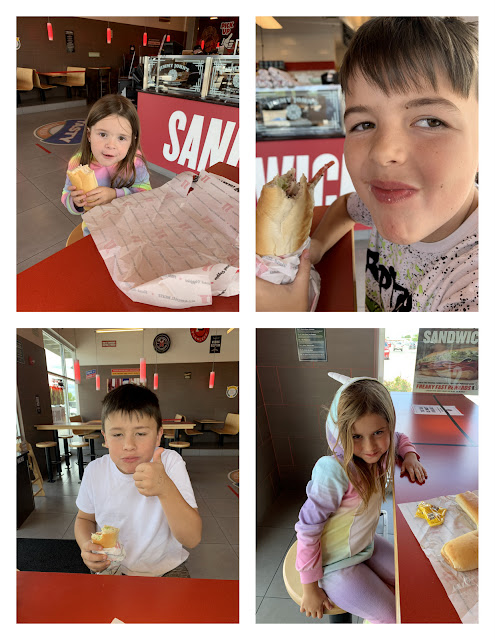 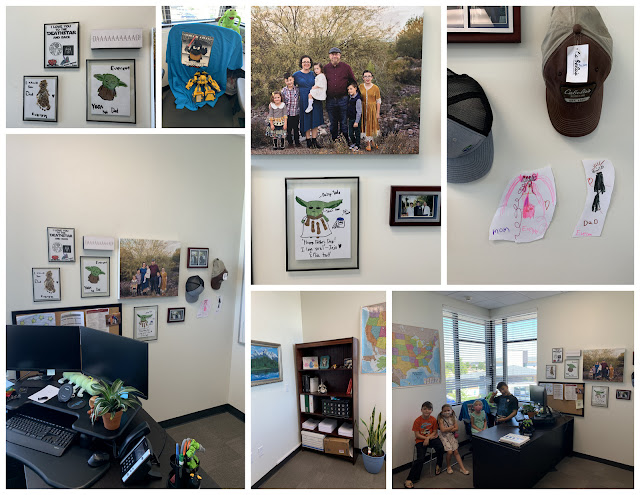 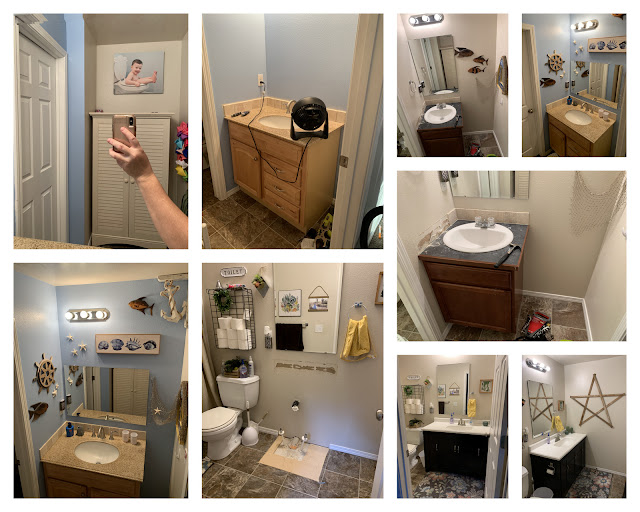 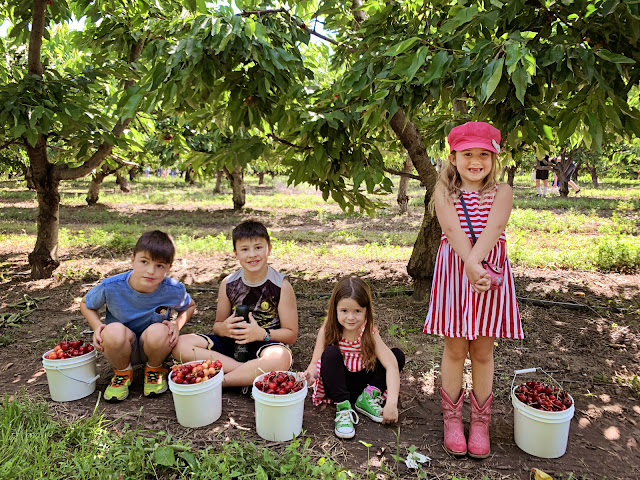 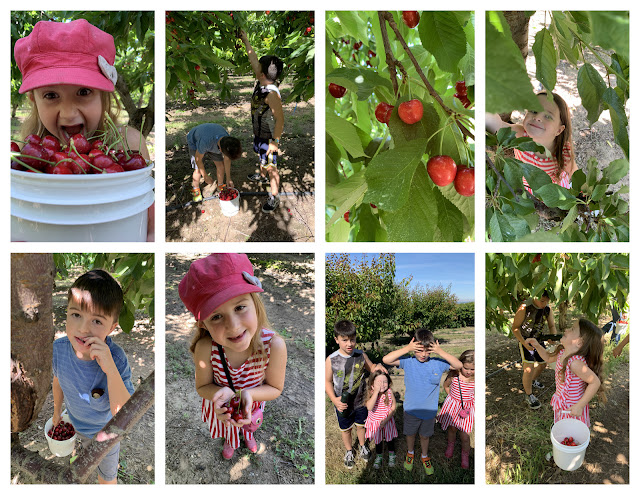 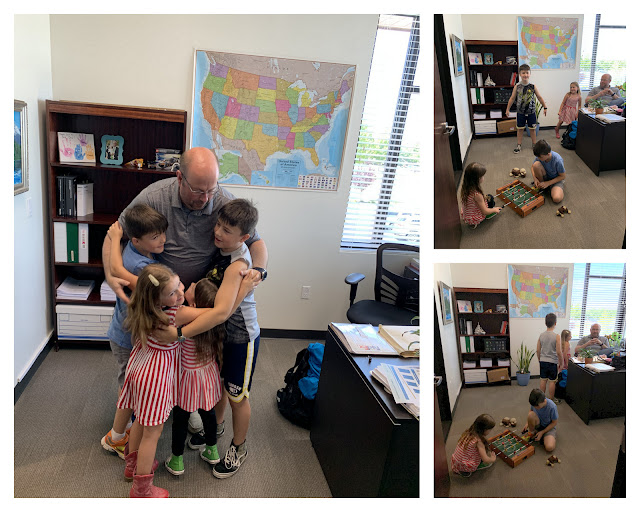 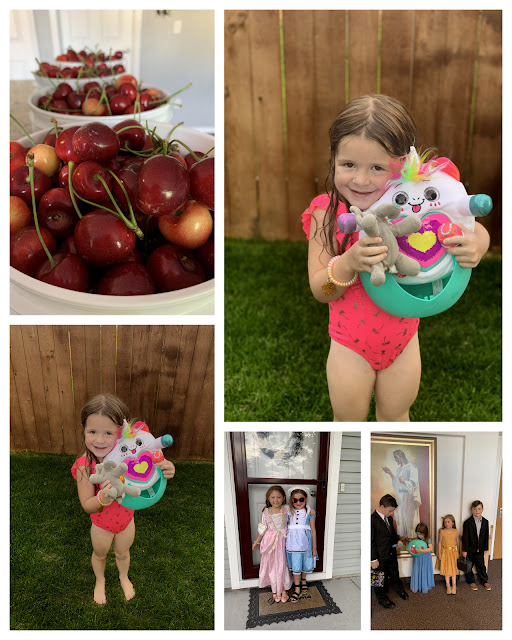 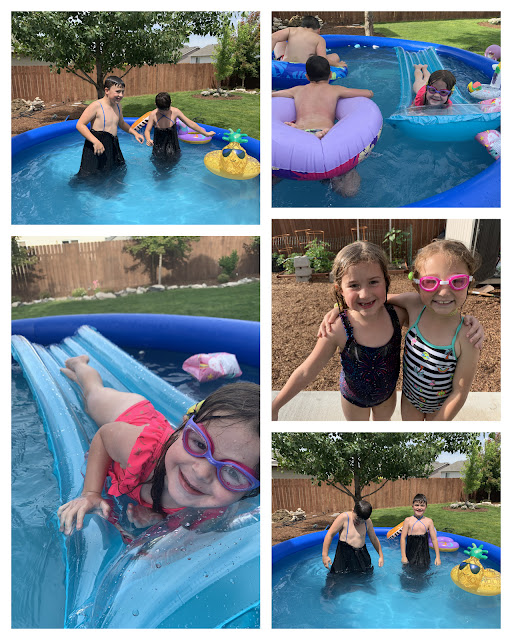 Charity got a spa treatment thanks to Evelyn! Evelyn recently declared she wants to be a nail technician AND a mom. Of course she needed to practice her nail art. I've gotten several nail makeovers this week as well. Half of Monday was spent dropping Mia off at the airport for her surprise visit to Chloe. We were both quite nervous about the trip per Mia flying solo for the first time. I was able to accompany her to the gate after a bit of a scene at security. I only had my new paper driver's license which apparently did not suffice. I had to hand over my debit card, credit card, even my diving card to verify my identity. I got a thorough pat down as well! We spotted a fun Darth Tater shirt for Justin Father's Day gift at the airport gift shop! I watched Mia board the plane so knew she was in good hands on the other end in Arizona. She did have a layover in LA for an hour but did not need to change planes. She did experience a spot of motion sickness during descent. Amanda and Tyler met Amelia at the gate, I hear they were a couple minutes late but Mia just stayed put. Amanda told Chloe she was bringing home her new boyfriend! Ha ha ha. Chloe was super surprised to see Mia at the door instead of a boyfriend.

Tuesday the kids and I made a short trip to Office Depot and Lowes. As we were driving to our location Phillip noticed a business advertising "The Blinds Gallery." He thought about it a moment then suggested we go visit the Blind Gallery after we start home schooling in the fall. He was very interested to learn how Blind people do art and how many blind people he would see at the museum. I died laughing (inside) before explaining that the Blinds Gallery was really a store selling window treatments. I admit, a gallery full of blind art would be fascinating. The kids helped me pick out a few things to decorate Justin's office for Father's Day. Josie picked an elephant tape dispenser, Phillip a new desk organizer, Evelyn a rainbow stack of sticky notes, and Everett chose a new plant. I looked for new bathroom backsplash tiles but nothing caught my eye, came home with a bag of grout. The boys helped me scrape and clean off the tiles from the up and down stairs bathrooms. With the additional tiles from the downstairs bathroom I did not need any new backsplash tiles. The tiles matched the counter perfectly so that was nice. Justin worked on the plumbing and I finished the rest of the bathroom vanity update. It looked so nice! Twice the size of the old unit and with drawers to hide toothbrush supplies. I am a terrible tile sealer, the silicone looks so chunky and odd so if you come visit don't look too closely.

Wednesday was the day I really, really missed Amelia. I took the little food shopping with me at Winco. Spent double my usual budget and left with my nerves especially frayed. The boys were steering a separate cart and of course acting like Captain Dufus Pants. Evelyn was throwing a fit because she wanted to steer and run down the aisles. Josie wanted candy from the bins. Mom, I want this...Mom! I NEEED that. We made it with only four new white hairs on my head. To reward myself for an amazing shopping trip (meaning all the kids left alive) we had lunch at Jimmy John's. Everett was so mad because he hates the sandwiches. Well, he stooped down from his lofty perch and tried a hunter's club...ummmm, yes sir....it was delicious. Everyone was happy.

Thursday morning the kids and I quietly packed up the van with art work, wall decor, two new plants, and other trimmings to decorate Justin's office. I coordinated with his boss Jen Freeman and Sara the office lady to come in while most folks were at home telecommuting. We framed some art, cleaned up stuff from the previous office dweller, and decorated. The kids were so excited! The noise level went up several decibels from quiet to medium loud. Someone told Justin he saw the family at the office but Justin was sure he meant the visit from a few weeks back. Justin had no idea. We drove home with the intent to keep our special surprise a secret. Evelyn almost ruined the surprise the next morning when she said "we never went to the office at all" in a coy tone. On the drive back we listened to Beauty and the Beast, Phillip asked what "Brute" meant. Everett chimed in from the back, "it means a handsome man in wedding clothes!" Ha ha ha ha. Justin asked where went for Travel Thursday, we said a nice drive around town. Amelia spent a lovely day celebrating Chloe's 13th birthday at Main Event, the Mall, and Sonic.

Friday Justin was so surprised it took him 10 minutes to admire our work before calling! Evelyn giggled for several minutes straight! That was darling. Yay! Success. I wanted to try cherry picking so we drove out to Caldwell to Williamson Orchard for Foodie Friday. We waited in a hot line for 20 minutes before we got buckets and paid the fees. The kids were so excited to find the perfect dark cherries with the most stems. Joyful shouts of "Double Cherries, BABY!" and such rang loud and clear. Josie picked mostly sour cherries within her reach. We loved the experience of picking our own fruit. We cannot wait to go back next year! We left with 4 (5.5) lb buckets brimming with cherries. The kids immediately wanted to visit Dad at his office and show him personally what we did. So we drove the 50 minutes to his office from the orchard. Everett insisted we introduce Justin to the delicious Hunter's Club so back to Jimmy's Johns we went. I finished ripping out the downstairs vanity since the backsplash was already missing. I seriously banged my knuckle with the sledge hammer. Ye ouch. Josie earned a large prize. This girl kicked her binky sucking habit to the curb. She "lost" her giraffe binky and her favorite elephant binky had a leak. So she slowly cast it aside longer and longer each day. By Friday she had not used it to sleep for several nights. We are so proud! Josie chose a Rainbow-corn surprise as a reward. This kid is getting ready for school! She is consistently using the potty for her poops now, dresses herself, gets her own shoes, puts away the silverware, kicked her binky habit...go JOSIE!!!!!

Saturday Justin took the proverbial bull by the horns and finished the downstairs bathroom vanity install. We are very different in our approaches. I just barge in and hope it all works, which sometimes it works, other times I make it work. He carefully spent the morning reworking the cabinet drawers to fit the needed plumbing changes. He measured and remeasured to ensure the plumbing and the cabinet worked as needed. The end result looks so good! Yay! Thank you Justin for making the new vanity work! I just realized the vanity was never screwed into a stud...better get on that one before some little person tips it over. Now to paint the master bedroom to match my new, pretty bedding set. I used black trash bags to warm up the pool water, it was freezing after our week of rain. The boys decided to swim with the bags, they made merman tails with the bags...the cinch ties became suspenders. They splashed out more than half the water out of the pool that day. Evelyn's little friend Ellie (from across the street) brought over 5 large floaties to play with. So much fun for everyone. Later Ellie convinced Evelyn to play dress up, Ellie was the princess and Evelyn was "the help!"

We were able to attend church on Sunday. That was an odd experience! We went to a new chapel with completely new people. The RS president introduced herself then asked which kid fell out of the window! Ha ha. Every other row was blocked off to allow the 6 feet of space. Our meeting was very quiet and reverent. The bishop said a few words, we hummed songs, then went home. I whipped up a homemade cherry pie for dessert. Grilled some steaks up for dinner. Yum. We went on a little family bike ride to the park and back. I was able to FT my with my Dad on Saturday. We mostly talked about home schooling and the socialist brainwashing that occurs in most schools nowadays. We love our Justin and our Father figures. I tried to have the kids do a skit about the Ammon story, that was a failure! Ha ha.

The kids all miss Amelia. Phillip said he misses Mia's hard punches and angry pushes. Everett said Amelia could stay away for the next 375 days...she makes him the most angry and makes him cry the most. Both little girls miss Amelia quite a bit. The boys said they mostly miss Amelia because she makes their games more fun.