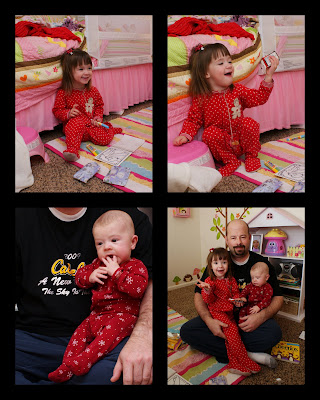 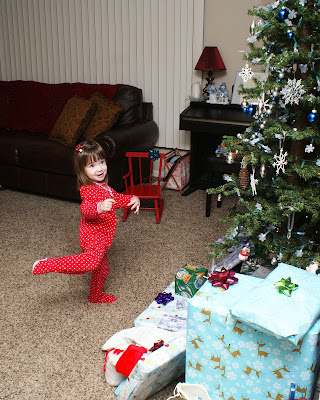 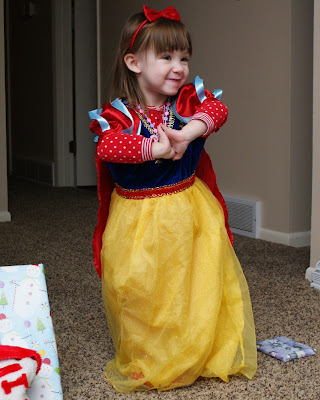 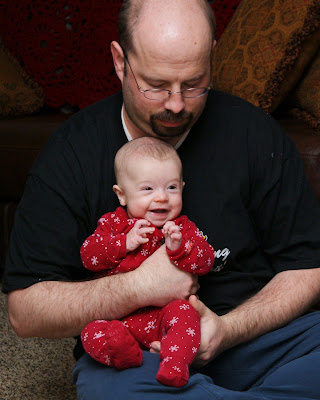 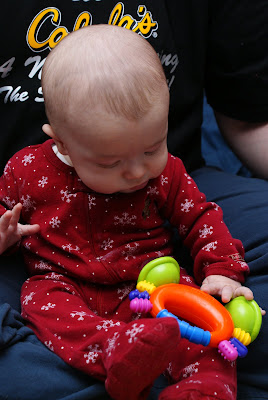 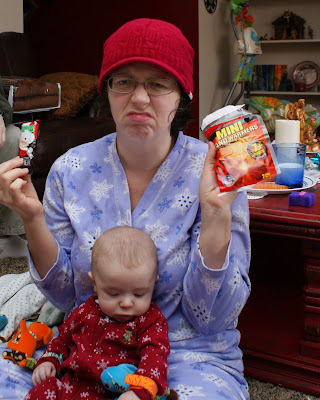 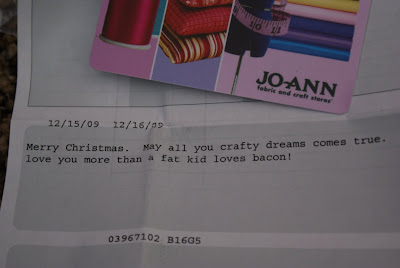 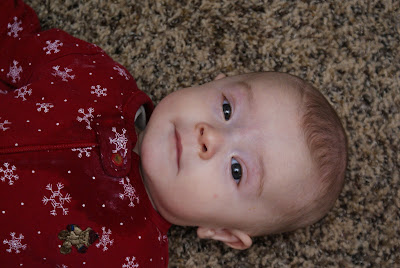 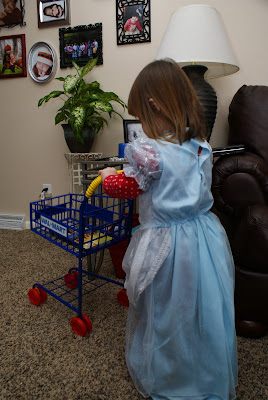 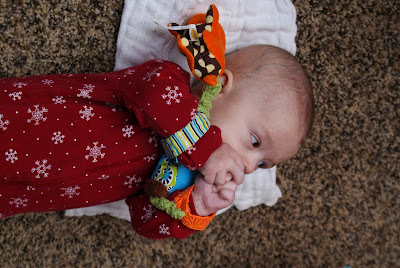 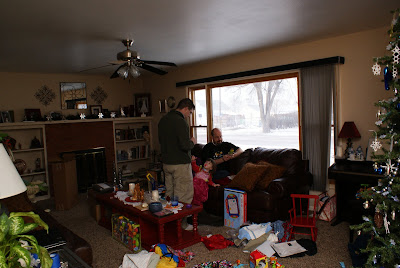 I think this Christmas was the most relaxing one on record. Phillip woke up at 5:45 but after nursing went back to sleep. We all woke up when Mia came trolloping out of her room dragging her "sock" (stocking) by the loop. She was super excited that Santa had the forethought to give her peppermint candy and chocolate in her Santa. By far the candy trumped her presents until she opened her Snow White costume. She was in heaven dancing around clasping her hands like a dainty princess. We spent an hour or so opening presents. This year we decided to not get each other gifts but rather get someone in need presents and food. Still I got Justin a gift with some crafty money I earned. All Christmas Eve I teased Justin about not getting me a surprise. He played along nicely. Justin is NOT a good secret keeper...honestly, most of the time neither am I. A couple months back I picked up a sweater and hat at Cabela's for Justin to wrap as a gift. The first gift had a chocolate Santa and hand warmers secreted inside. He exclaimed, "see I surprised you!" prompting me to throw the items at him. My second gift had another secret wrapped up...this time it was cool. Justin got me a gift card for JoAnn's craft store. Way to go honey! Justin also has a new down vest to add to his plethora of outerwear. Amelia was cracking us all up, she'd eat a candy, open a gift, go for another candy, etc. She donned her Snow White, then Cinderella, then a new fairy costume. Pair the costumes with a kid-sized Walmart cart and she was in heaven. Little Phillip cooed his thanks for batting toys and clothes. The little guy looked so cute in his Christmas union suit. Goodness gracious we have cute kids.

Christmas Eve I experimented using my super flash seeing if it would work for getting better pictures Christmas morning. After some practice I decided to use the flash as a bounce flash directed toward the ceiling. The effect was perfect. The flash provided enough light to get an even tone and sharp picture for most of my pictures. Talk about excited! Coming soon will be pictures of our completely decorated house....stay tuned!

Justin and Jeff made eggs, link sausages, and English muffins for breakfast. I took a long nap afterwards. Then Justin took an even longer nap (like four times longer). Mia went in to snuggle daddy around 2 pm and didn't come back out until 4:30. Her new favorite thing is to get snuggles. We love to give those snuggles whenever requested. The Christmas mess lingered and lingered until this morning. Somehow the chaos was comforting and mindful of cute memories.

We had a simple meal of BBQ dry-rubbed turkey breast, mashed potatoes, gravy, and green beans, supplemented with wheat rolls on the side. The turkey was simply awesome! It was tender and juicy to perfection. We wanted to go visit the Haley clan with some dessert in tow, chocolate parfait, but the weather was horrendous. Starting around 9 pm Christmas Eve and continuing through today and tomorrow the weather forecast is: TOTAL CRAP. Meaning, high winds (gusting up to 67 MPH), ultra cold temperatures, and drifting snow. All day the winds howled and whistled through and around our house. Our bedrooms were freezing cold since they are situated on the North side. It was the perfect jammie day.

After dinner we watched a movie and then gave the kids a bath. Jeff has an awesome flat screen TV and Blue-Ray player. We've really enjoyed having his TV, hummm I mean Jeff, here to visit. This morning we braved a short trip to Walmart for milk and a new ice maker kit. The guys had the new kit installed in less than 5 minutes with no leaks. Yipee! Sometime this evening we will venture out to have dessert with the Haley family. Of course we enjoyed talking to family over the phone and reading Dad's Santa letter. Dad's letter this year was so funny. Jana reported that Dad was cackling over his letter this year. The up-coming week is packed with Jeff leaving, cleaning house again, our 5th anniversary, and New Year's Day.