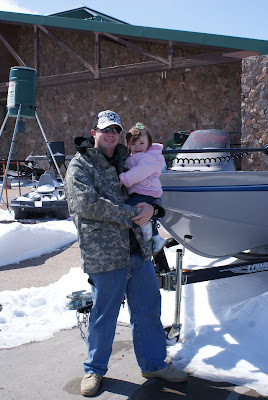 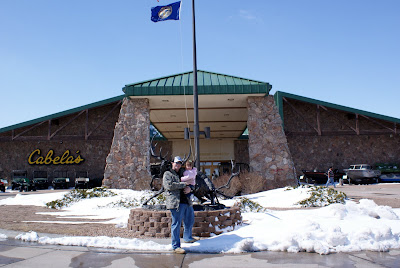 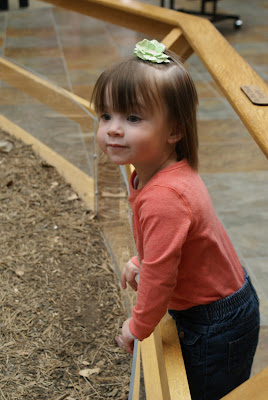 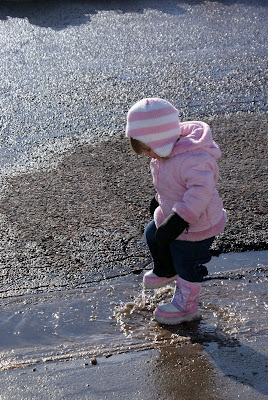 Jeff finally showed up around 1 pm on Sunday. He was glad the roads finally opened! We were glad to see him. Amelia must have recognized him from the picture book we have on family. She kept calling him Jeremy. I think she finally settled on calling him Jeffy, which came out sounding like Hefe, so we dubbed Jeff, El Hefe! Amelia was thrilled to have another person to play with. Jeff played fun throwing games with her. I made a yummy dinner of BBQ pulled pork, mashed potatoes, broccoli, and bread. Justin and I really liked Elder Holland's talk on Sunday morning. We both had tears in our eyes!

We spent several sessions outside playing in the snow. Yesterday morning Jeff watched Amelia while I went to the gym. It was nice not going at 6 am. Plus the roads were still icy at 9:30 am. We headed up to Cabela's to show Jeff our town's pride and joy. Amelia pulled him all around the store showing him the fish and animals. Justin met us there for lunch.

Amelia had a blast playing in the melting snow. She stomped in puddles to her little heart's content! Jeff was kind enough to stay at home with Amelia while Justin and I went to see a movie. We saw "Taken" an action thriller, sort of like Jack Bauer meets Bourne. It took a while to finally fall asleep after all that action. Jeff packed up some lunch and left around 9:30 this morning. Thanks El Hefe for the fun visit. We will see him in about a week.

Posted by Jenni Call at 10:30 AM 2 Stupendous Remarks