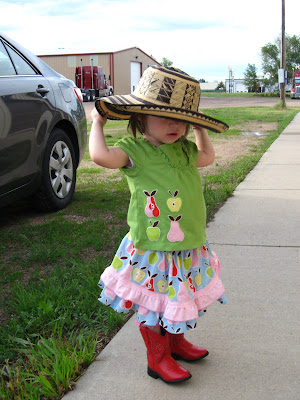 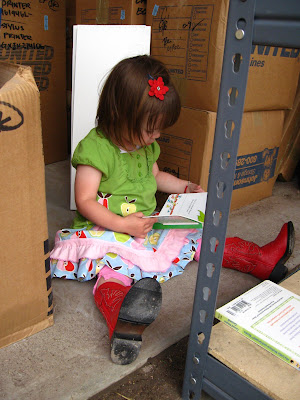 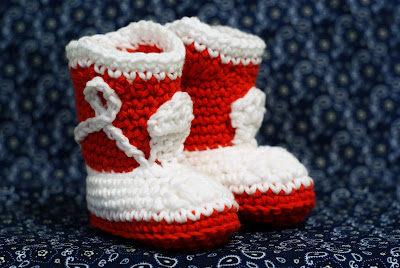 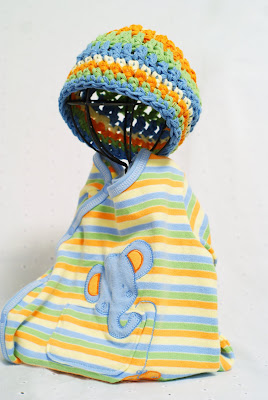 I am enjoying the rainy spring weather this week. Yesterday our rain gauge showed over 2 inches of rain collected during the day!! We had some fantastic thunderstorms on Monday. Mia did not nap so well, even with a fan running in her room, due to thunder. Monday we went to the storage units to try and find Justin's summer shorts. Instead we found some books for Mia, PJs for me, and no shorts.

Mia wore her cute new outfit I made last week to the Dr's office. I had my third ultrasound, a blood draw, and rhogam shot. It appears the baby has a little bit of hair already! He is laying with his head to my left and bum to the right, which is actually better for me in the breathing department since he is not under my ribs. The tech said he is growing fast, she said the charts put his new due date as 21 Aug, now. The Dr probably won't change my due date...but I secretly did!! His left brain ventricle is now in the 60th percentile instead of the 90th, so most likely the "danger" of brain damage is not as likely. Hopefully, that means no more ultrasounds. Amelia charmed everyone at the hospital with her friendly ways. She amused herself in the ultrasound room by piecing apart my purse and getting stuck behind the large fake tree...where she did her daily doo-ty. She was most distressed when the nurse gave me the rhogam shot in my bum, the nurse let her put a band aid on my owie. We ended our day with a visit to the ice cream store. Mia squealed in delight for an entire block once she realized where we were headed.

Yesterday I ventured out for an hour in the rain. We went to the bookstore to buy a wooden fruit and vegetable set held together with velcro that Mia can "cut" with a wooden knife. I received a gift certificate from a lady here so only paid half price for the set. We waltzed over to the coffee shop and had hot cocoa while playing chess. Click here is a fun video of Amelia cutting up her veggies and burping!! I made a cute boy hat and one cowboy boot. The pattern for the boots was about the worst pattern I've ever followed. I ended up emailing the pattern creator about 5 times with corrections. It took me almost two hours to crochet one stinkin' bootie. Only the need for a second bootie lead me to make the second this morning. I had to follow my previous bootie instead of the pattern. Luckily, the booties are almost the same size!! Still aren't they just cute. If you want a pair I am not crocheting them for you...I will email you the corrected pattern!! Justin was nice enough to rent me two movies to crochet my projects to. I watched "Bedtime Stories" and "Yes Man." The first movie was really cute and worth watching again. We also cleaned my car out in anticipation of our trip to Utah on Friday morning. We will be gone two weeks...Justin only one week.

This morning I was sick of being home-bound so we spent some money at Walmart on trip treats, then met Justin at Cabela's for lunch. Amelia loves to roam the store looking for taxidermied animals stuffed in odd corners. Her favorite is the stuffed squirrel. We got Justin a Father's Day present of a fishing pole and accoutrements. He and his brother, Dad, and the little people are going fishing this weekend and next week. Happy Father's Day two weeks early. Alison had me take some pictures of her and her fours kids this afternoon. We found a cool alley and also took some at the fishing pond. Check out my favorites at http://www.applegreenphotography.blogspot.com/