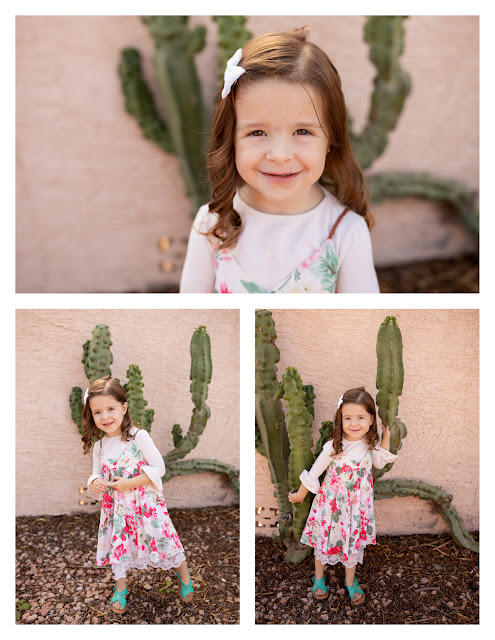 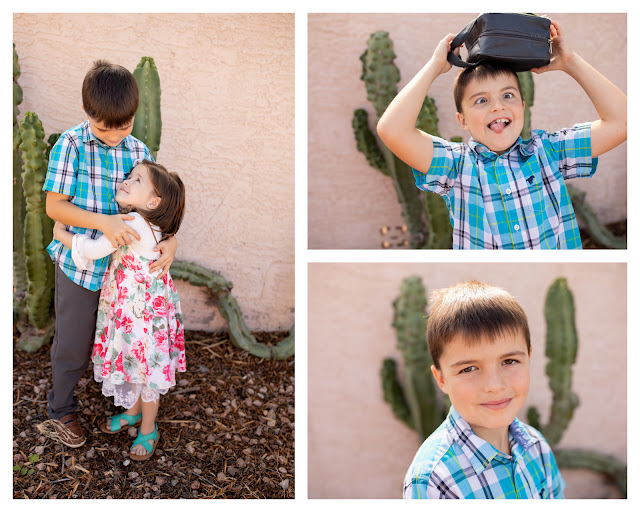 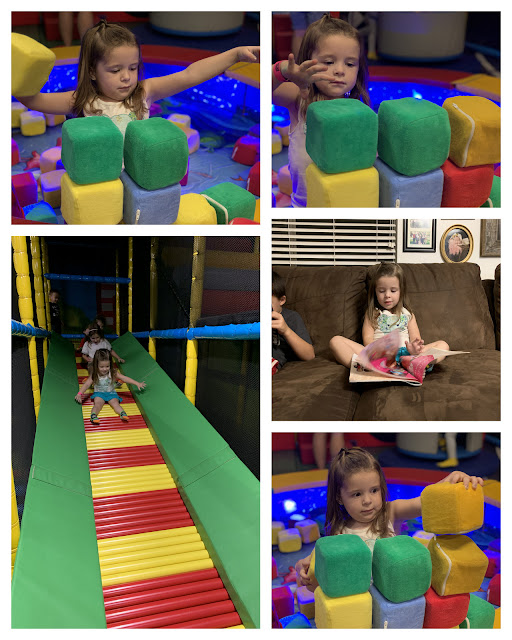 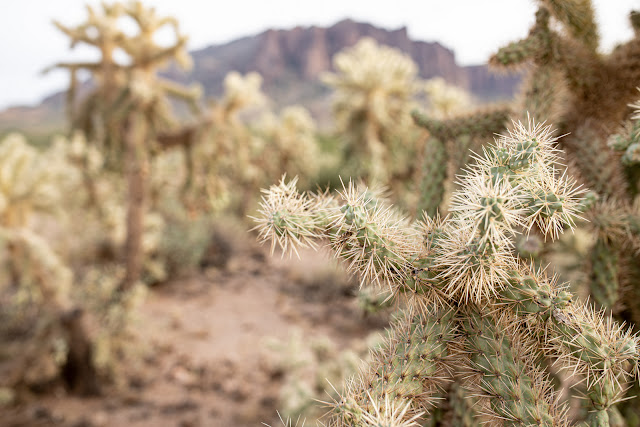 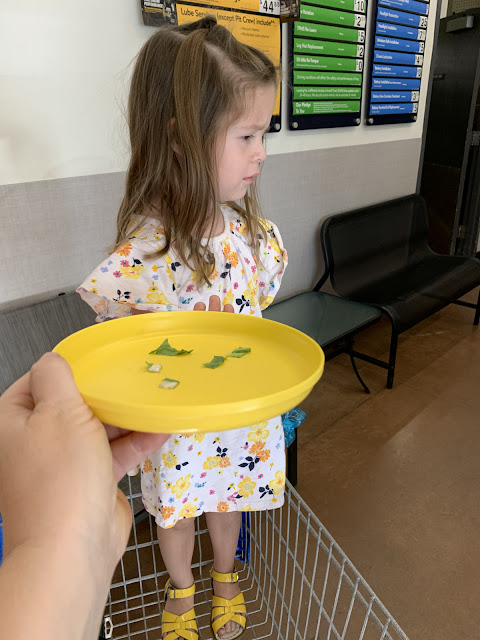 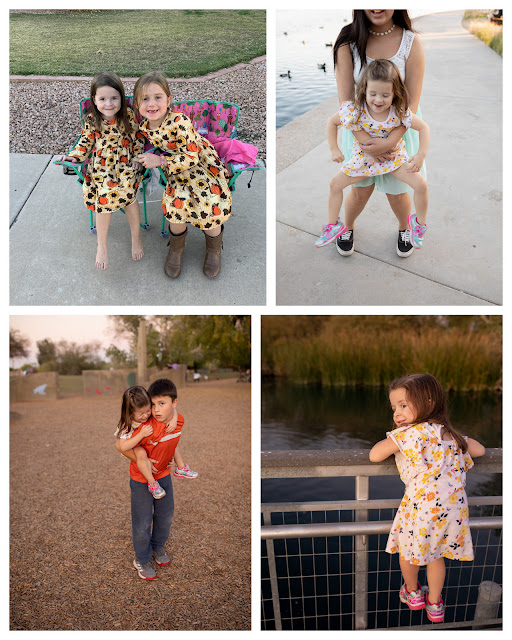 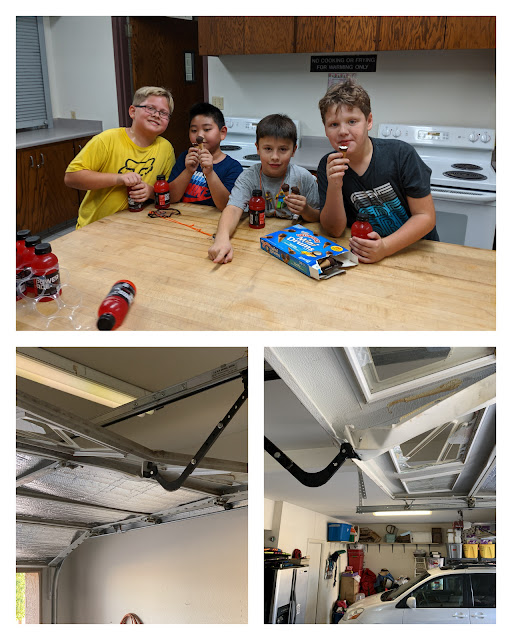 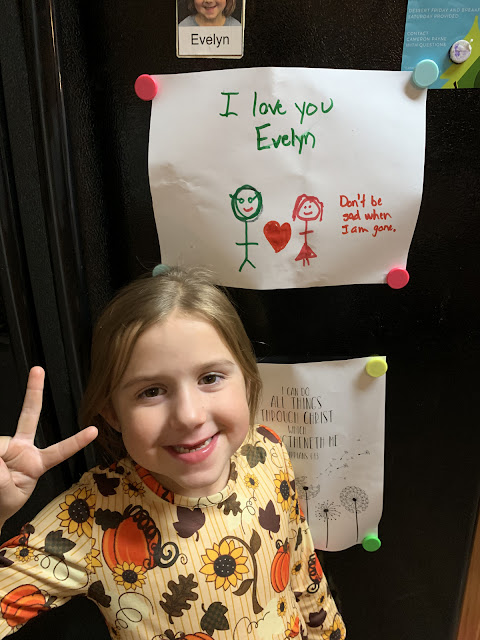 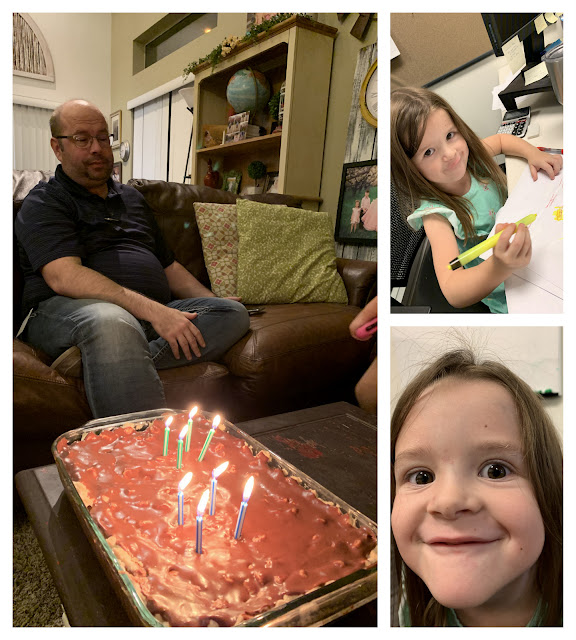 Justin had to work on Veteran's Day this year. He said most other folks at his office were gone so he was able to bust through lots of work he needed to catch up on. The rest of us enjoyed a quiet morning. We went to Uptown Jungle for a couple hours to play using our Pogo Passes. This time we went to the Chandler location instead of the Mesa one. It was a little bit smaller but still quite engaging. Josie was terrified of the upper "hamster" runs most kids seem to enjoy. Instead I followed her around the ball pit and the toddlers area. We made a special visit to McDonald's for lunch after our play session. We've nearly cut out all fast food visits, down to 1-2 eat outs per month (excluding trips). I had another desert photo session out past Lost Dutchman. It's funny the tiny parking lot is empty at 3:30, come 3:45 it's like a migration of photographers and families swarm the area. I photographed a family we knew in Sidney, NE! They have three gorgeous daughters, two stunning redheaded girls! Swoon! Amelia is raking in the babysitting money while I am gone working! She loves the extra bit of money, I love saving money by hiring her. Evelyn got to play with Taylor for the afternoon. We had salad for dinner. Josie has pretty much removed herself from dinner and is content waiting for hours until bedtime treats or such. She hates all fruits and vegetables, seriously, has not eaten any fresh produce for over a year. She did slurp down baked potato soup but dug in her heels when I asked her to take a bite of lettuce. I told her no more food until she eats one little bite. Well, she is as stubborn as they come. Little twerp did not eat a morsel of food until after noon the next day. I took her plate of lettuce hoping the toy aisle or a treat would be an incentive. She refused, decided toys were dumb and treats were for tomorrow. She finally nibbled a centimeter scrap of lettuce wrapped up in a large piece of deli turkey. I was oddly proud of her strong will to stick to her guns and frustrated about her disgust of foods. After her nap she proudly told the kids she ate her "leluce." I think we both lost the battle of the lettuce. Again on Saturday she went without food after dinner because she would not even lick/taste her lasagna. In desperation I even washed off the sauce so it was just a plain noodle, NOPE! She would not be persuaded. Went to bed hungry again! I decided it was not worth the fight to continue into the next day, she happily ate a large bowl of oatmeal (with chicken sugar).

Tuesday after school I photographed Amanda, Chloe, and Ronald. Amelia stayed home with work on Science Fair with Zoey. Phillip watched the younger girls at the Riparian play area while I took photos. Phillip accidentally bonked Josie's head while giving her a Piggy-back ride, other than that little incident the kids had a great time running about. Phillip is really such a sweet, loving big brother. He tries so hard to be kind and attentive, his wildness often overwhelms his sisters, I wish the girls could see past that and admire his big heart. Josie lately has taken an affinity to Everett, she calls him the best brother. Everett dotes on her in return. Those two have an ongoing kitty (Josie) and master (Everett) game going on.

Mornings this week were quite difficult for Evelyn. She woke up Monday-Wednesday bawling for Daddy; complete water-works even all the way to school. Justin took her on a special gas station trip on Tuesday. Wednesday he took a moment to draw her a picture, just like all the pictures she draws him! She proudly put her prize up on the fridge! She was delighted! Thursday and Friday mornings went just fine. She loves her Daddy!

Everett is participating in a running club during lunch recess. He reported to me that he is in his best shape ever! Well then! Keep up the good job. The boys loved scouts this week. Everett went on a hike around the Riparian with his troop. Phillip had a treasure hunt in the church, they had to use a compass to find their clues. Ronald seemed to quite enjoy himself, all the boys had flushed cheeks and ran over 2 miles in and around the church building. Thursday the boys opened the bike garage door when a loud snap shattered three of the window panes. Somehow the garage door support ripped off and buckled the top of the door. After a couple of opinions looks like we need to replace that door, it cannot be fixed. Took a bit of time to sweep and vacuum up the glass, makes me nervous with so many bare feet running about. The girls expressed a desire for sidewalk chalk. We ran to the Dollar Store for chalk! Soon the driveway was covered with rainbows and Josie's line drawings.

Justin celebrated his 44th birthday this year! Hooray! We were totally lame and did not do much this year. It seemed excessive to celebrate by spending money when we're trying to eliminate some credit card debt. Josie and I drove up to have lunch with Justin at Jimmy John's. Josie devoured her entire plain sandwich. Josie got to spend a bit of time in Daddy's office without the bustle of her older siblings, she loved the attention. We (blush) went out again for dinner at Moreno's for his birthday dinner. We both adore their shrimp cocktail and shrimp ceviche tostada. The kids were over the moon to eat out at a restaurant again. I think the kids ate several plates full of cucumbers and avocado salsa. I made Diana's marshmallow brownies from scratch for his special treat. I hope Justin felt the love from all of us that day! He turned the ever so lofty 44 years of age.

Saturday was a busy, busy day. Amelia was up past 10:30 working on homework since she missed school on Wednesday and Thursday with a sore throat and cough. She worked consistently for 6 hours to catch up. Poor Zoey left our house in frustrated tears and tantrums because the printer would not coordinate with her laptop and print out their Science Fair forms. Pretty tense moments. Amelia earned her downtime for sure on Saturday. I had an early morning session with Sarah Burton's family. I was the button pusher and attention grabber for a very energetic extended family photo session. She is paying me in cookies! Best money ever. Amelia had her much anticipated piano recital at 11 am. We dropped off Phillip and Everett to the Chandler Call's home for Anson's birthday party. The boys got to have an epic 3 hour long Nerf gun war. The rest of us listened to an amazing piano recital. Amelia performed her pieces so well. I got chills as the last note hung in the air from O Come Emmanuel. Mrs Nurenberg recently upped the cost of piano lessons and is only taking serious students now. We could tell a definite difference between the April and November recitals. These kids performed beautifully. I had a few moments of "what kind of piano teacher am I?" I am the kind with no formal training but who can teach out of a book sort of teacher, the kind best for Primer-level 2. I am ok with that! I had another two photo sessions starting at 2:30 with an Indian couple expecting their first baby. Goodness sakes, that mother to be was absolutely stunning! Second family made me a bit nervous, 4 boys under the age of 5 would make most photographers a bit nervous. I take my cap off for those two amazing parents. Their boys were complete angels. Finished their session in less than 30 minutes, even got home before it was dark.

Today was our last Personal Finance meeting, 12 weeks of growing with a group of people we came to dearly love and appreciate. If you have the chance to take this class, DO IT! You learn so much more than personal finances, you learn how to be Spiritually and Temporally Self-Reliant. We zipped through the last chapter quickly in order to watch the Face-to-face with Elder Gong. Busy Day! Church, choir, class, broadcast, then dinner with our group. I had a roast cooking for dinner in the crock pot and made cookie dough the night before. I called these cookies Harry Potter cookies because my kids would not eat oatmeal-butterscotch cookies. The broadcast was quite amazing. It was interactive with technology, scripted, interspersed with video, music, and word. Our kids were completely bored, almost lost them to boredom several times. I was quite inspired with the new program. The church is continuing the effort to start the gospel with the individual as the focus and the church as support. Love it! The YM even have a theme to memorize and recite now. A program for kids, run and directed by kids is novel and exciting. I can't wait to start! Dinner was quite fun. We really lucked out with our group, the Browns hosted the dinner. We sure love the Lamberts and Cheryl (facilitator) and Shannan.

**in my next career I might become a plumber. Justin thinks my business should be called "Say no to Crack." Make a group of woman plumbers! I *might* just make that happen. I deal with enough poop to be quite immune to most gross smells and situations.